The Bluffer’s Guide To Delay

From simple slap-backs and multi-repeats through to live looping and layering, delay is an endlessly creative effect. Rob Boffard echoes that sentiment with his essential advice… Delay is the crazy uncle of effects. You’re never quite sure whether to invite him around. Sure, he might be delightful company, the life of the party, but he […] 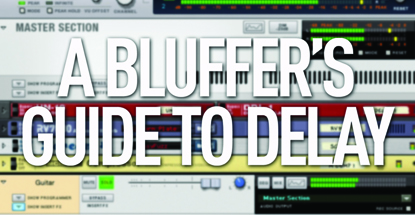 From simple slap-backs and multi-repeats through to live looping and layering, delay is an endlessly creative effect. Rob Boffard echoes that sentiment with his essential advice… 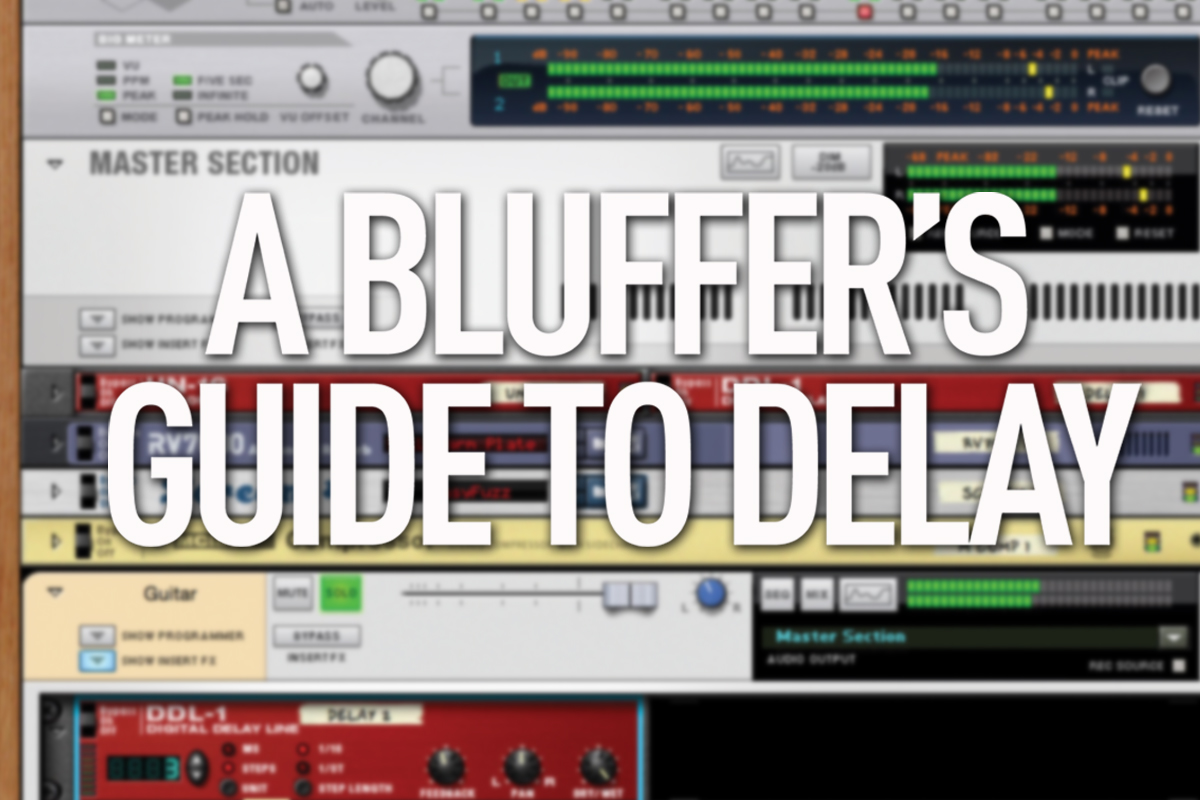 Delay is the crazy uncle of effects. You’re never quite sure whether to invite him around. Sure, he might be delightful company, the life of the party, but he could equally be crude, embarrassing and highly inappropriate.

That’s delay. It doesn’t have the subtlety of reverb or the track–enhancing power of compression, and in the wrong hands it can be a total disaster. But used correctly it can create some truly miraculous effects.

One of the major advantages with delay is that you can hear its effect immediately. In fact it’s actually one of the easiest effects to get to grips with, mainly because the standard set of controls have immediately recognisable results. This isn’t like compression where you have to listen hard when adjusting the attack ratio or the threshold. The real skill comes in knowing exactly how much delay to apply to any given element of your track.

And Again
Delay is very simple to understand. It’s an echo, with a fancy name. (Or, historically, echo is based on analogue tape and delay usually on digital technology.)

What we’re talking about here is a version of the original audio signal played back after a set period of time. It can be played back any number of times and the spaces between each playback can be as long or as short as you want. Really, that’s it. Shout your name into a canyon and you’ve just experienced delay. 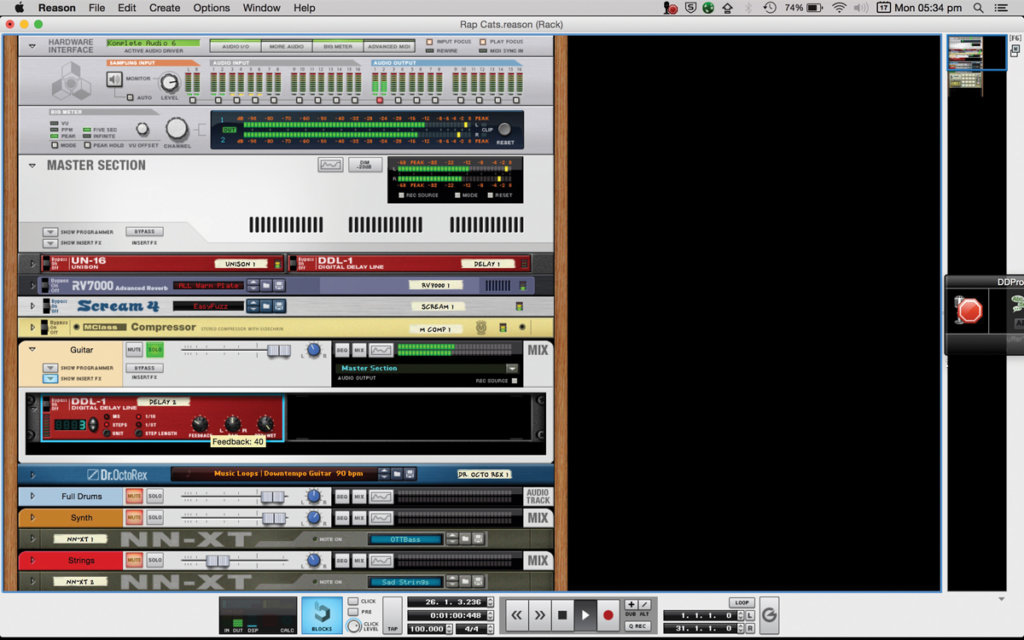 The feedback controls how many copies of our delayed signal will be produced. It doesn’t look it, but we’re pushing it quite hard here.

Early recording engineers quickly cottoned on to delay as a powerful creative effect. They use magnetic reel-to-reel tape heads to achieve it, adjusting the heads to create the delays they needed in the sound. The actual process was quite simple but the problem was that the longer the delay got the more complex the hardware needed to be and the more tape heads needed to be involved.

As a result, delay took a little bit of time to mature. Oh sure, there was plenty of it in the ’60s and ’70s, but it’s only really been with the advent of digital technology that the full possibilities of delay have been explored.

There’s a big difference between analogue and digital delays, both in complexity and character. An analogue delay – that is, one that comes from or is based on tape technology – will offer fewer ways of controlling the sound but will often sound warmer and richer than you’d expect. The latter might not necessarily be true of a digital delay, but what you will get with this version of the effect is a huge number of ways to control the sound.

The most obviously important one is the time control. You might see it labelled differently on some plug-ins, but the effect is broadly the same. This is what controls the amount of space between each copy of the original sound (we’ll call these copies ‘delays’ for the sake of clarity).

In most cases you’ll see this read out using milliseconds, but most plug-ins also offer options to sync it to your track’s BPM – useful if you want to keep the delays in time with your beat. You often see this expressed using time signatures, such as 1/4 or 1/16. Most times, the easiest way to get the delay you want (or the one in time with your track) is to play around with the control until it fits.

The second one is the feedback control. The time control is all about the spaces between the delays, but the feedback is all about how many of them there are. A feedback level that is really low will see only one or two delays being played, while one that is really high could have delays that continue forever. This can sometimes be a real problem, but we’ll come back to it in a little while. 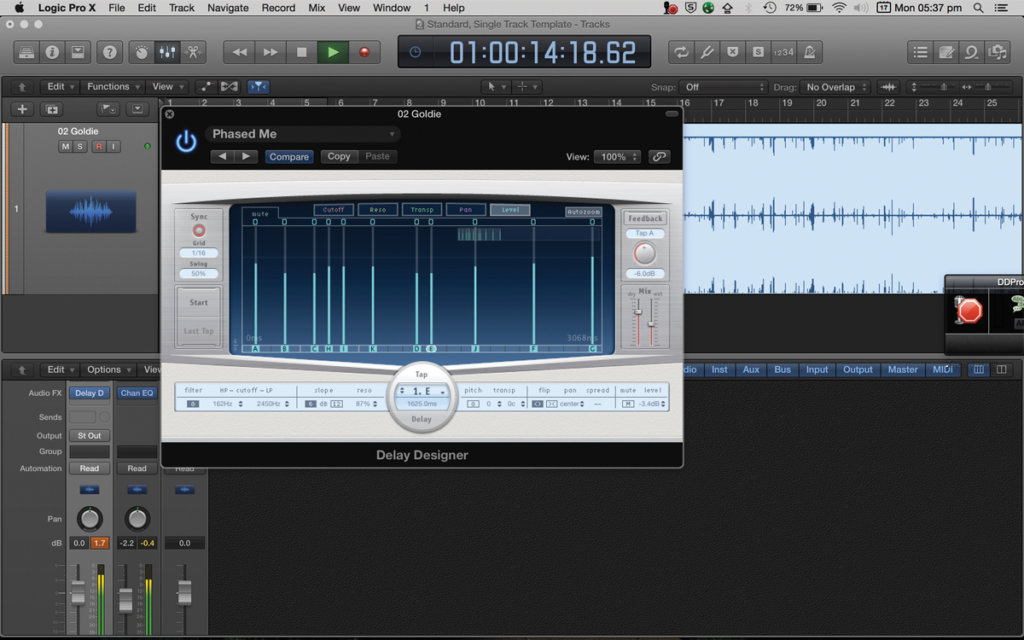 Delay units can often be exceedingly complex in terms of parameters to control, as is the case with this fantastically detailed Logic plug-in, the Delay Designer.

It’s these time and feedback controls that make a delay plug-in. You can’t have one without them, but there are other controls you may wish to pay attention to.

Chief among these is pre-delay. Essentially, this shortens or lengthens the time between the original sound and the first delay. At first glance, it doesn’t seem particularly useful, but in certain situations, such as when it is used in minuscule amounts, it can strengthen the impression a listener has of the delay. You’re not likely to use it on the first go but it’s pretty useful once you get the hang of it.

Then there’s the wet/dry mix parameter. This controls how much of the delay you hear in the track in relation to your original ‘dry’ sound. Your instinct might be to work this all the way up to 100%, but the resulting sound will quickly overwhelm anything else in your track. As with all the other controls, it’s best to fine-tune things at a lower rate.

Beyond that there’s not a lot you really need to worry about in terms of other controls. You’ll get the odd collection of filters and EQs, but those are there to sharpen the overall sound rather than create it in the first place.

Direct Effect
So how do you go about actually using this effect?

Let’s start with something subtle. Yes, we did use the drunken uncle analogy earlier, but let’s pretend he’s got his mouth full of food. One of the best ways to thicken the vocal and give it more presence in the mix is to double-track it: have the vocalist record the same lines twice, or have a backing singer do it, and lay them on top of each other.

But sometimes your vocalist has gone home, or you don’t have enough money to hire a backing singer. A tiny bit of delay, placed judiciously on some vocals, will create a slight chorus effect. You need to be incredibly subtle with this, making tiny adjustments to the time and feedback controls, but it’s a great tactic.

Okay – now he’s finished chewing, and he’s ready to tell another inappropriate story. Fortunately, this one is quite good. You can use delay in all sorts of creative ways – that’s kind of what it’s there for.

You can create what’s known as slapback delay, which came about in the ’50s and which U2 guitarist The Edge helped make popular again in the ’80s. You’ll know it when you hear it, trust us. In fact, several delay plug-ins even include this as a preset, and there are even plug-ins specifically designed for slapback delay. Note that you may sometimes see this called slapback echo. Same thing. 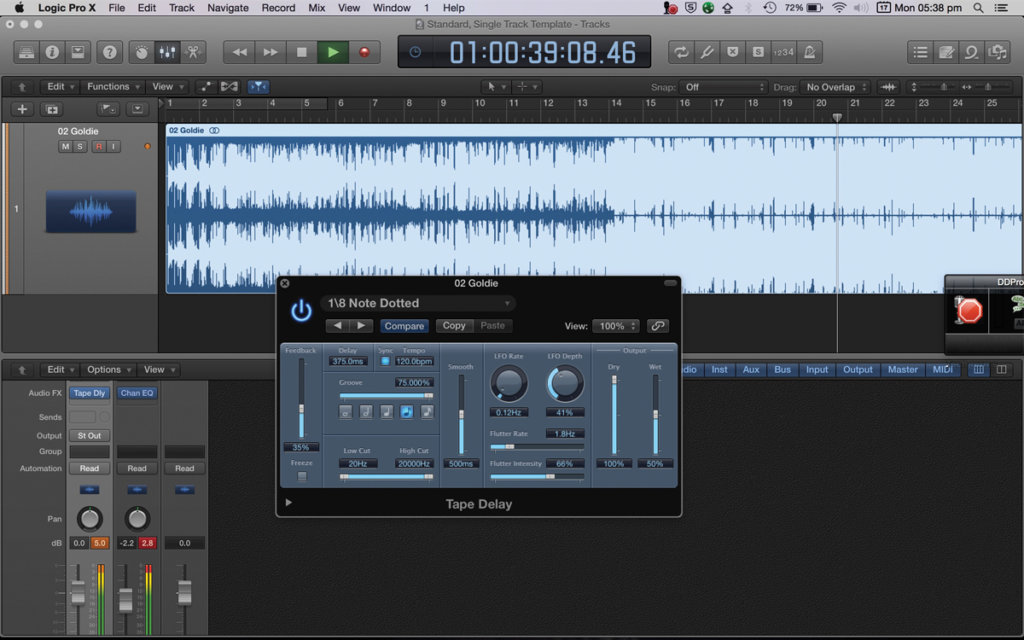 A tape delay emulator in Logic. As you can see there are plenty of other controls to alter your delay, including an EQ and an LFO.

Then there’s stereo delay. You can hear this in the work of artists such as Run the Jewels (El-P and Killer Mike). What this effect does is send alternating delays to the left and right channels of the mix, creating an interesting sound space. It is particularly effective if tempo-synced to the track and, as long as it isn’t used too much, can be a lot of fun to listen to.

And you remember that infinite feedback we mentioned earlier? If you have a sound with a delay effect on it and it has a short time and a very long feedback, you’ll get an infinitely looping, increasingly dense version of the sound. That can, if you’re not careful, overload your speakers and even crash your system.

Don’t get it twisted, though: if you know what you’re doing you can create a swirling soundscape, one you could potentially re-sample and create a whole new track out of. This is quite hard to do, but it’s certainly possible.

What it all comes down to is this: delay is an effect that begs to be played with, and that demands to be pushed in weird and wonderful directions. If you let it, it’ll take you into some very strange places, but ones that will produce some amazing ideas.