The Bluffer’s Guide To The Basics of Music Technology

If you’re bursting with musical ideas but don’t know how to realise them then this is the series for you. Rob Boffard guides you through the music-making maze, starting at the very beginning… Producing music is a bit like snowboarding. You need equipment to do it, and you have to have a basic understanding of […] 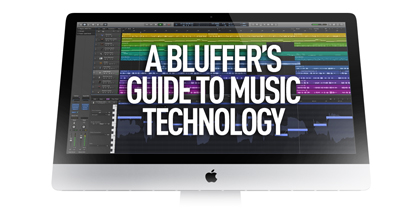 If you’re bursting with musical ideas but don’t know how to realise them then this is the series for you. Rob Boffard guides you through the music-making maze, starting at the very beginning… 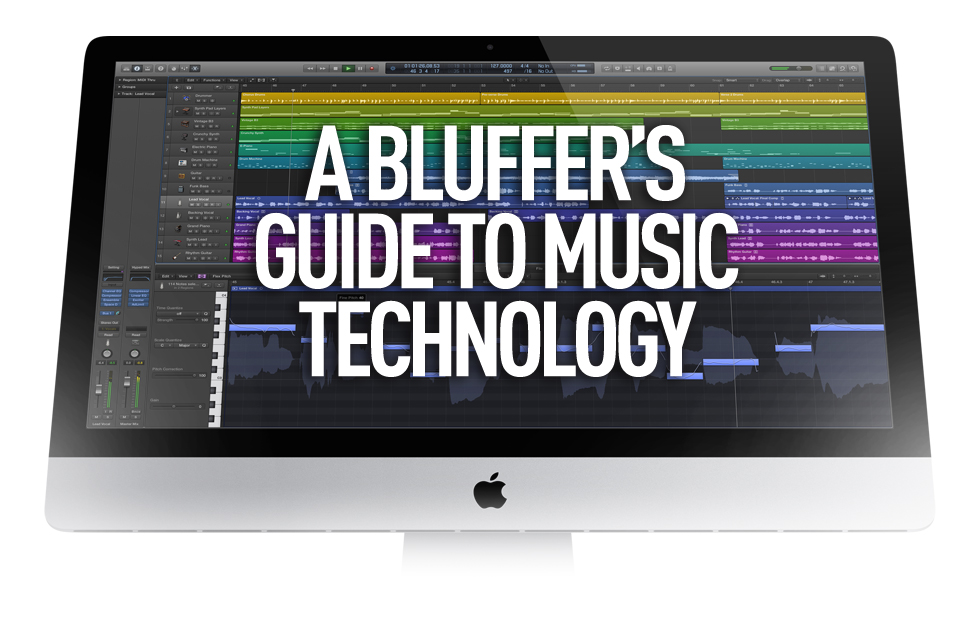 Producing music is a bit like snowboarding. You need equipment to do it, and you have to have a basic understanding of what you’re doing, but you’re probably going to fall flat on your face a few times. Simply admiring good snowboarders or knowing the general principles of snowboarding aren’t going to be enough. If you want to carve up a slope you need to put a little time into working out how it’s all done.

Now that we’ve got the mangled metaphors out of the way, welcome to our bluffer’s guide to music technology. If you’re just getting started in making music then this is the perfect primer for how it all works. In the months to come we’ll focus on different aspects of producing music, but for now we’re just going to look at the big concepts: the mountain, if you will, rather than the boards and boots and bindings. 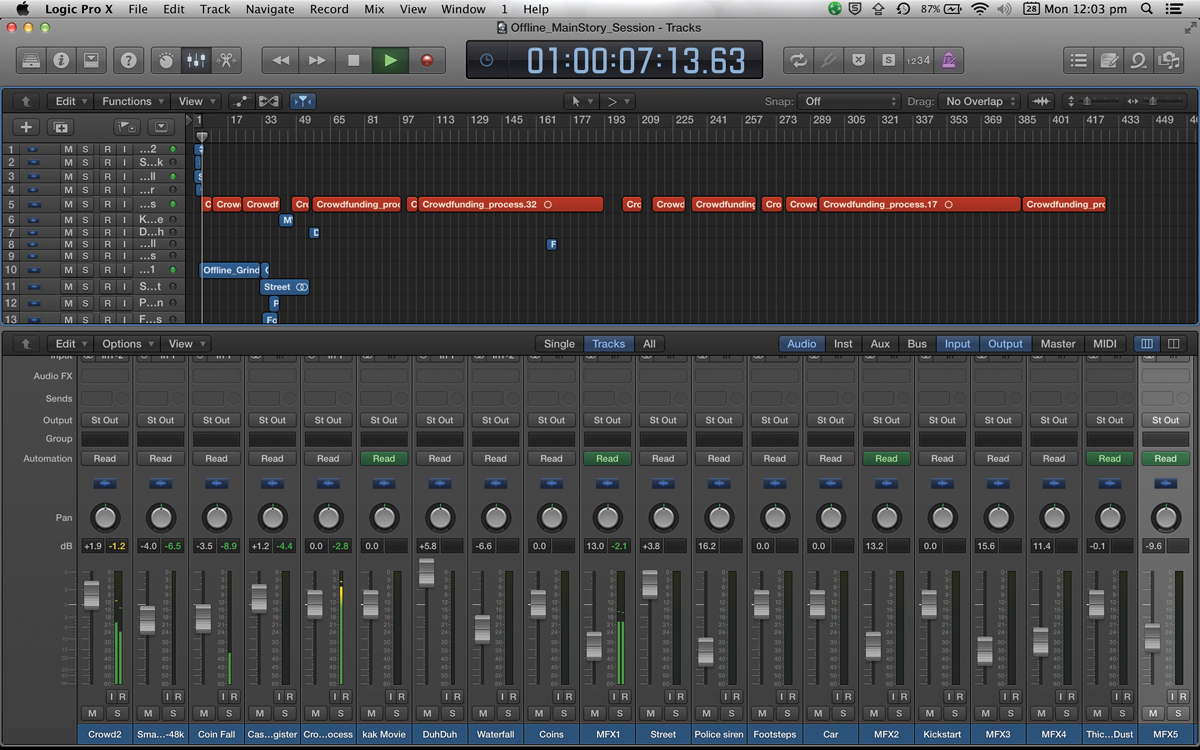 Logic Pro’s mixer pops up when you press X on the keyboard. Instant access to the levels, pan controls and effects on all your tracks.

Open the DAW
This may come as a total shock to you, but in 2014 music is mostly created using computers. That’s not particularly interesting or informative but you might not know just how it’s done, or exactly what goes on when a producer sits down at a computer to make some music.

Back in the day, the centre of the music studio was a big mixing desk. In many cases it still is, but it’s not as crucial as it once was. Every piece of sound went into that desk, and after having processing applied to it, it all came out the other end. Outside of big studios you won’t find too many enormous mixing desks. What you will find, though, are their 21st-century equivalent: DAWs. 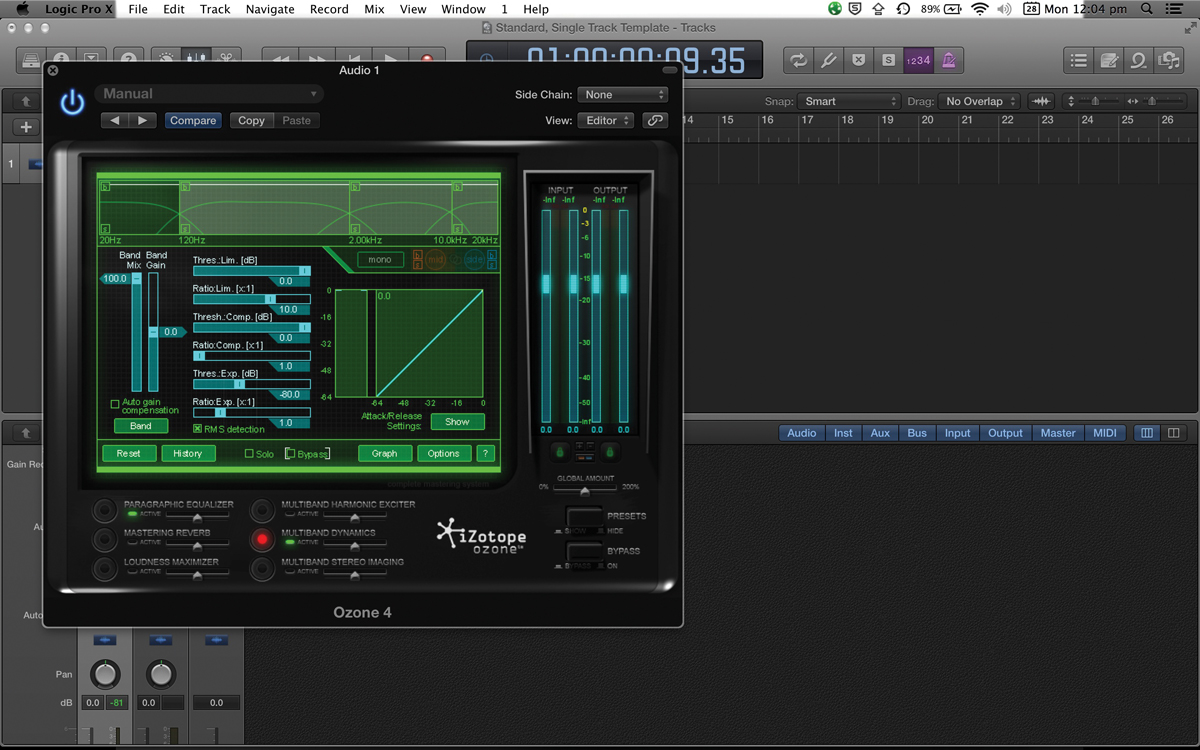 You can master your tracks on your own computer, using programs such as iZotope Ozone, pictured here. But you won’t get good results with a bad hardware setup.

Nobody has ever been able to pin down if you pronounce it ‘Door’ or ‘Dee-Ay-Double-You’. Frankly, it doesn’t matter. Pick the one you like best. It stands for Digital Audio Workstation, and it’s almost always the hub of any producer’s world.

It contains a sequencer, where pieces of audio are arranged and edited, a mixer, where their levels are changed, and a whole host of effects and instruments that you can use to mess with existing sounds or create new ones.

You’ll find plenty of DAWs on the market, and you’ll need to spend a bit of time figuring out which one you like using. This should be the deciding factor: you absolutely have to be comfortable with the program you’re working with, and so it pays to audition them before shelling out your hard-earned. There are several big names and they all have their own strengths and weaknesses.

Pro Tools is a big, powerful, industry-standard program, but it’s also finicky and expensive and difficult to get to grips with (plus, dealing with Avid, the company that makes it, will drive you insane). Logic Pro is Apple’s own program, and is versatile and great to use, even if it is Mac only. Reason is a music-focussed software package with dozens of dedicated instruments – perfect for production, but quite unusual and hard to learn. Then there’s Cubase, Audition, Soundation, Ableton, and more…

Any DAW is intimidating to learn. But put the time and effort in and you’ll discover something interesting: whatever each DAW’s personality, they all work in roughly the same way. Realising this is a powerful moment, because once you can use one DAW, you can, in theory, use them all.

The Big Three
Music production is divided into three distinct segments: composing, mixing and mastering. No matter what kind of music you make, whether you’re in a big, multi-room studio or hunched in front of your laptop, that’s how it goes.

Composing is the act of making music. It’s the process of taking an idea in your head and putting it into recorded form. This might happen with an entire band or it might be you and your DAW and a couple of software instruments bashing out a drum beat. Doesn’t matter. If you’re recording something, or creating it, then you’re composing.

Then there’s mixing. This is also pretty simple: you’re taking all the elements of your song and blending them together. This is all about adjusting volume levels, panning left or right, and applying effects to sharpen up sounds (don’t worry, we’ll deal with effects in a subsequent instalment). You’re looking to take the separate channels and put them together so that they sound awesome.

We’re not going to lie to you: the mixing stage is hard. It requires you to develop a good ear, put in a lot of time, and gain a good dose of experience. But you can’t skip it, and the only way to get good at it is to do lots of it.

Then there’s mastering. This is about taking your finished track and putting an extra layer of shine on it. Imagine you’ve cooked a nice meal, blending all these different ingredients together and using the perfect amount of spices. You don’t just slop it out into a polystyrene kebab box you’ve got lying around. No, you find the nicest plate you’ve got.

Mastering is the plate. The process beefs up the sound, makes the volume consistent throughout the track, and puts an extra layer of polish on it. Mastering is a dark art – you can do it on your own, but it’ll be much better if you let a pro do it. That’s not just because they’ll have the best-sounding studio and the most heavyweight equipment, it’s also because they can bring a fresh set of ears.

Hard and Soft
There’s nothing to stop you making music with just a laptop and a DAW. It can be done. But you’ll be in a much better situation if you can invest in some hardware, particularly when you stop composing and start mixing. No matter how good your computer is, its soundcard is not going to give you the results you want.

The easiest bits of gear to get your head around are headphones and speakers, or monitors as they’re known in music making. You want ones that aren’t going to colour your mix – what that means is that they absolutely have to pump out the sound as it is, rather than increasing the bass or treble. This is not the place for a pair of Beats by Dre cans.

When you’re mixing, the most important thing is to know exactly how your mix sounds, and monitors and headphones that can give you this – known as a ‘flat’ response – are worth spending money on.

Of course, you could just plug them right into your computer. If you’re an idiot. A much better option is to invest in an interface. This is essentially an external soundcard for your computer, one which you can plug all your equipment into and then connect back to your computer (usually via USB).

A good one, such as the MBox that ships with Pro Tools, will enable you to control your instrument levels, the main volume, and how much of anything you’re hearing at any given time. 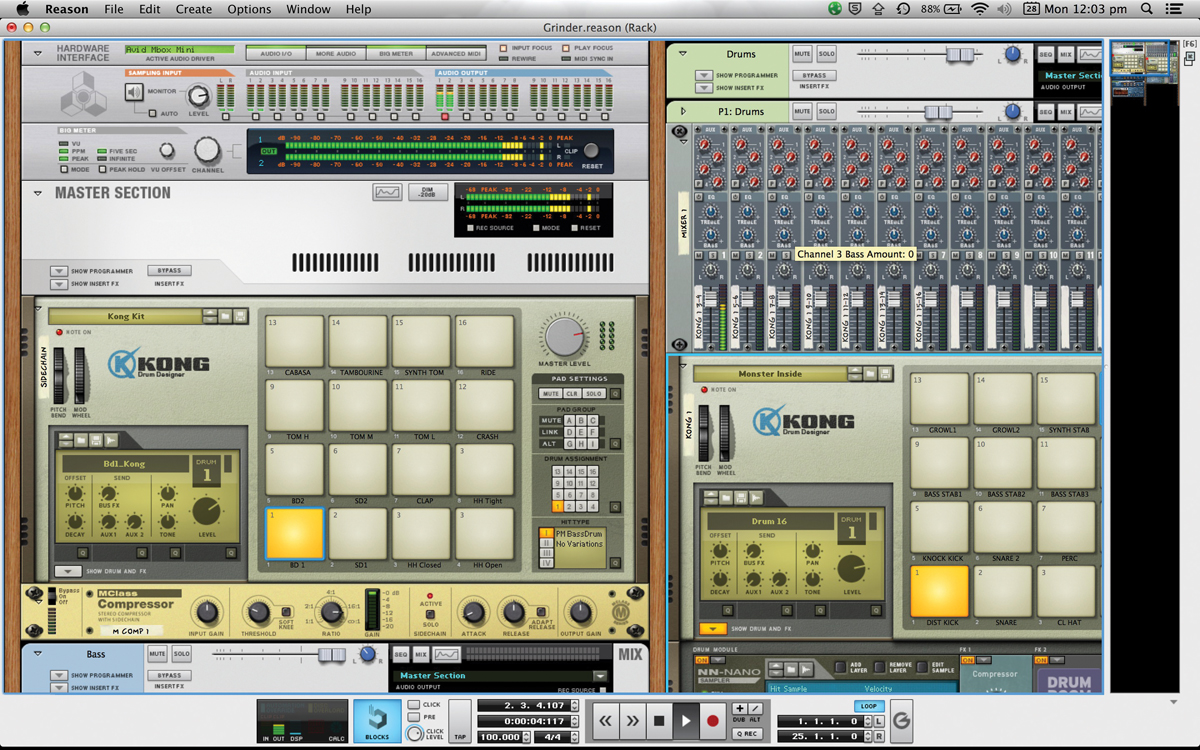 Meet Reason. It uses a rack system to line up software instruments for you to use. Hit tab, and the rack flips around to the back where there are cables you can rearrange.

Speaking of instruments, they’ll all connect to that interface. Whether it’s a keyboard, a guitar and amp, or a microphone, they’ll all eventually come back to the interface. If you have a lot of instruments (if you’re in a band, for example) then you’ll be needing a bigger interface with a lot more inputs. Just you and your DAW? A single input will be fine.

And you might have guessed this already, but a mixing desk is just an interface with faders on it. It’s not just the computer’s external soundcard, it lets you get direct physical control over the parameters of your track.

The big, classic desks are renowned for providing a pleasing colour to the sound – a quality that translates as warm and rich when it hits the ear. Not every desk will do this, but there’s certainly an argument for investing in your own. It’s a nice-to-have, though, not an absolute.

By the way: remember those effects we mentioned? They can come in hardware format too, usually in big rectangular units that can be slotted into dedicated ‘racks’. They perform in exactly the same way as their software equivalents, shaping and moulding the sound, it’s just that to use them you send audio to them from your computer and then the effect sends it back all nicely processed.

So. DAWs, the three stages of music making, and hardware. That’s the mountain you’re standing on top of. Next time, we’ll take a look at how to get down it.