Best Free Apps Yes, you can get something for nothing and it can be great. In fact you can get ten somethings for nothing, and here they are! SoundCloud (iOS and Android) The SoundCloud app runs on your iOS or Android device and not only provides a way to listen to content from the audio-hosting […] 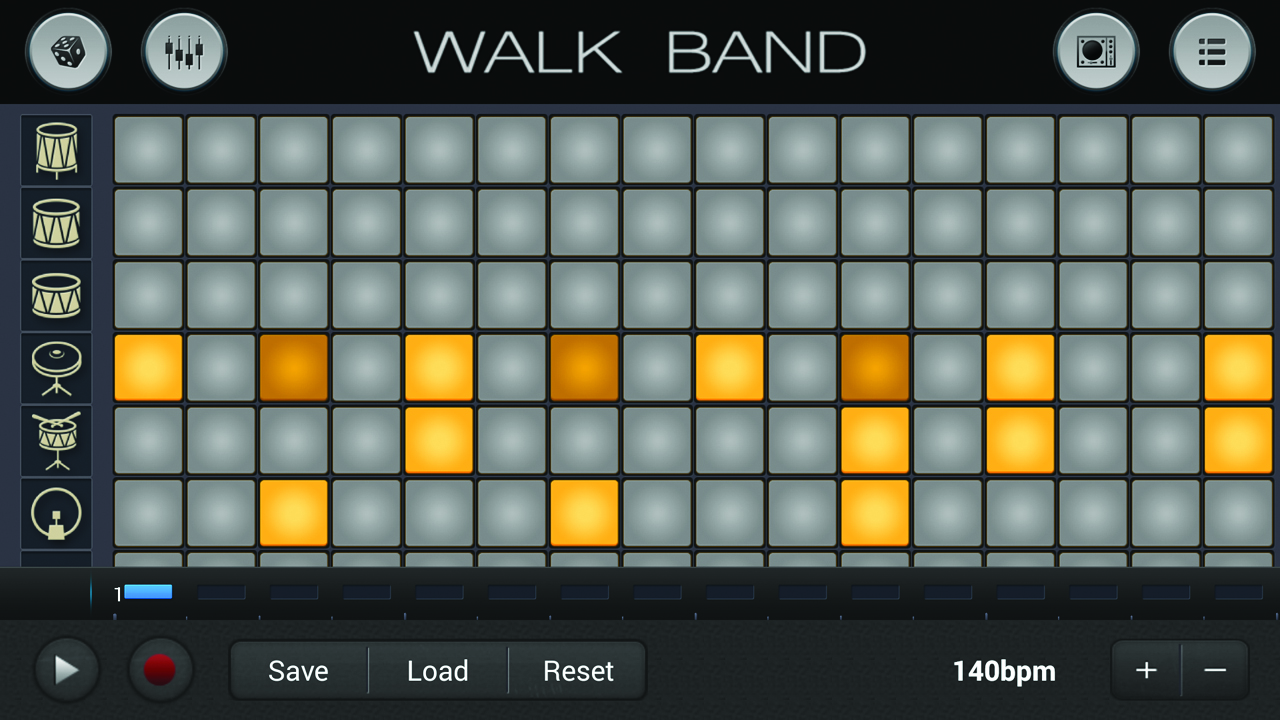 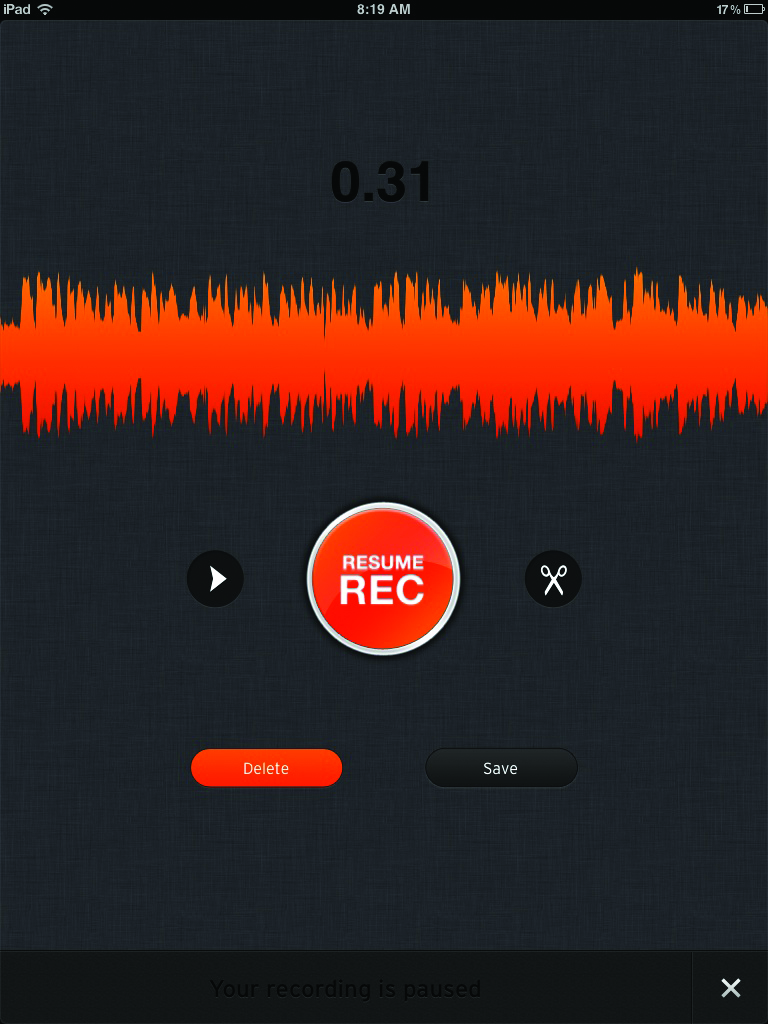 SoundCloud (iOS and Android)
The SoundCloud app runs on your iOS or Android device and not only provides a way to listen to content from the audio-hosting website and curate your own playlists and collections, but also record directly from your device into the cloud.

So if you are out and about or making field recordings you can use your device’s built-in mic and capture the sound around you directly into your account. SoundCloud is pretty much the standard audio hosting site for most people these days and also provides some apps to help you sell and market your music.
Web www.soundcloud.com Price Free

Apple GarageBand (iOS)
GarageBand for iOS is free when you buy any new iOS device, otherwise it costs £2.99, and for that it works on iPad and iPhone for a single payment. It’s ludicrously cheap considering what you get: multiple virtual instruments, auto-playing tools for strumming guitars and playing chords, guitar amps and live recording through effects, a sampler and a cool mixing environment.

You can record lots of tracks (though not unlimited) and when you’re done either mix down your file or export the raw project data out to GarageBand on the Mac for further editing. As such it’s a great way to start an idea on the move then continue work back at home.
Web www.apple.com Price Free or £2.99 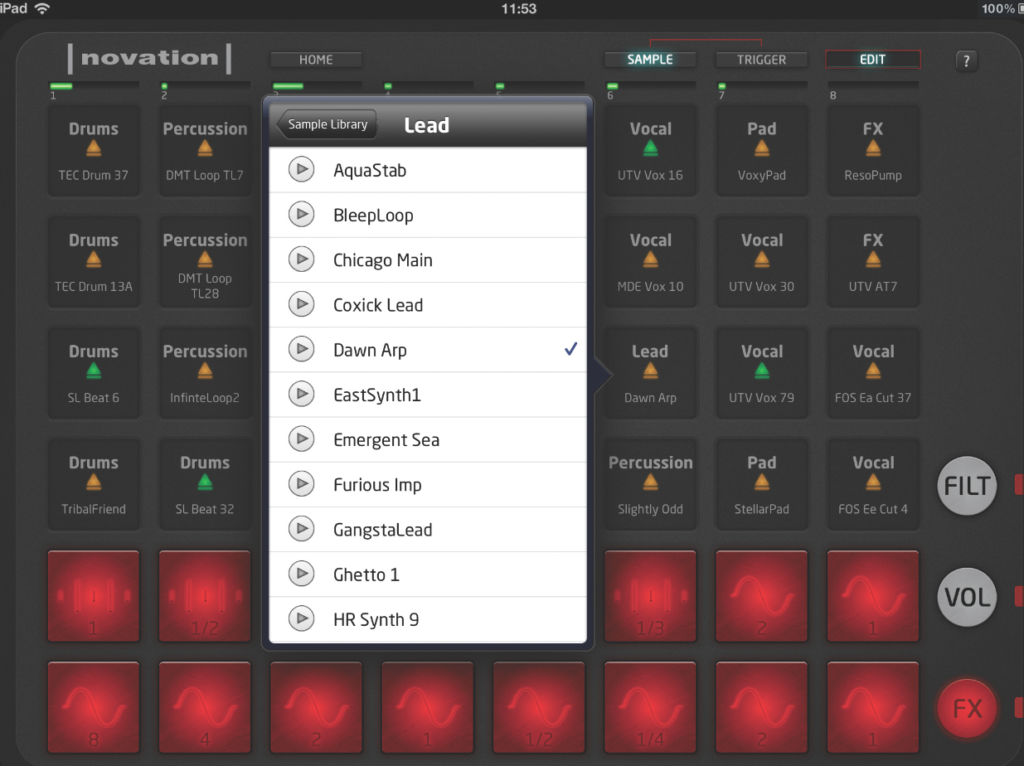 Novation Launchpad (iOS)
The Lauchpad app for iOS comes free with eight ready-to-play sessions, and additional features such as audio import are available after in-app purchases.

For £4.99 it’s probably worth unlocking audio import as it will really broaden the scope of what you can achieve: you get an 8×6 grid for launching up to eight loops at once, a range of effects on iPad including repeater and synced filters, and on the iPhone there’s filter, stutter, gating and delay.

You can perform, mix and match and trigger loops and record your performance, then share it online or to another app via Audiobus. You can also connect one of Novation’s controller devices via the USB Camera Connection kit.
Web www.novationmusic.com Price Free 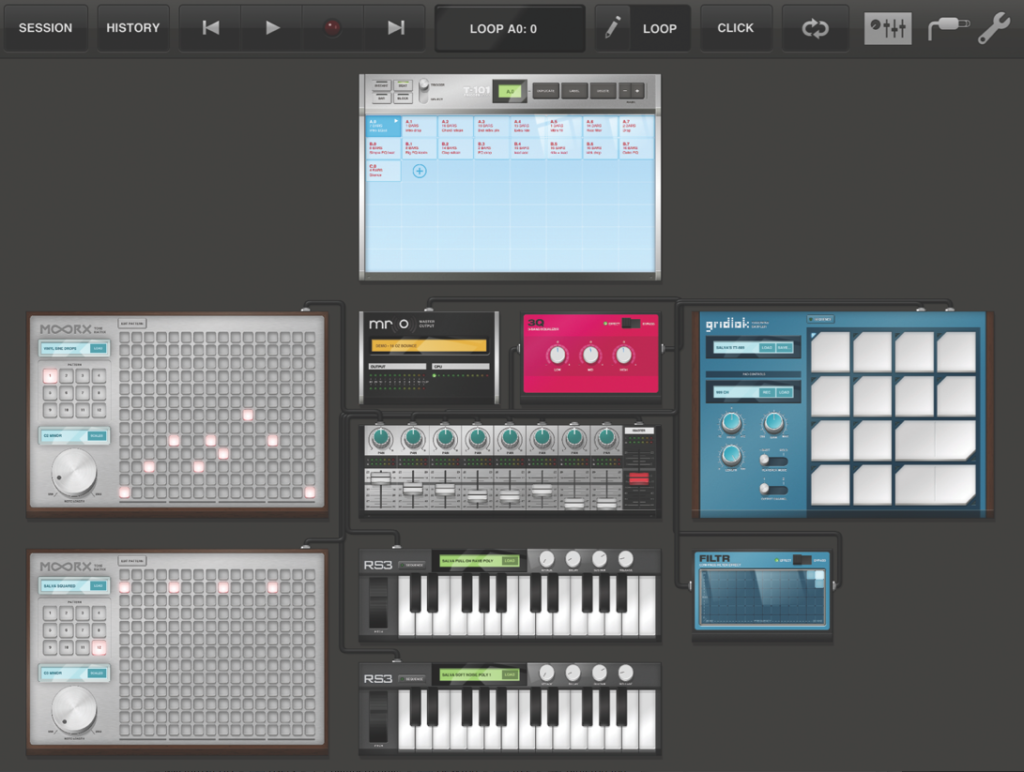 Retronyms Tabletop (iOS)
Tabletop is a modular environment that lets you mix and match different devices such as samplers, mixers, effects, synths and more. You get 14 devices for free and can add extras via in-app purchases. It’s an advanced but relatively approachable system and up to 43 devices are available, with support for Tabletop-ready apps such as iMPC, iMini and iProphet.

There’s a piano-roll editor and pads for programming and editing MIDI, quantization, MIDI learn and mapping, Core MIDI support and the ability to hook up compatible MIDI hardware. More devices and features tend to get added over time so Tabletop is an organic, expanding environment.
Web www.retronyms.com Price Free; added in-app purchases 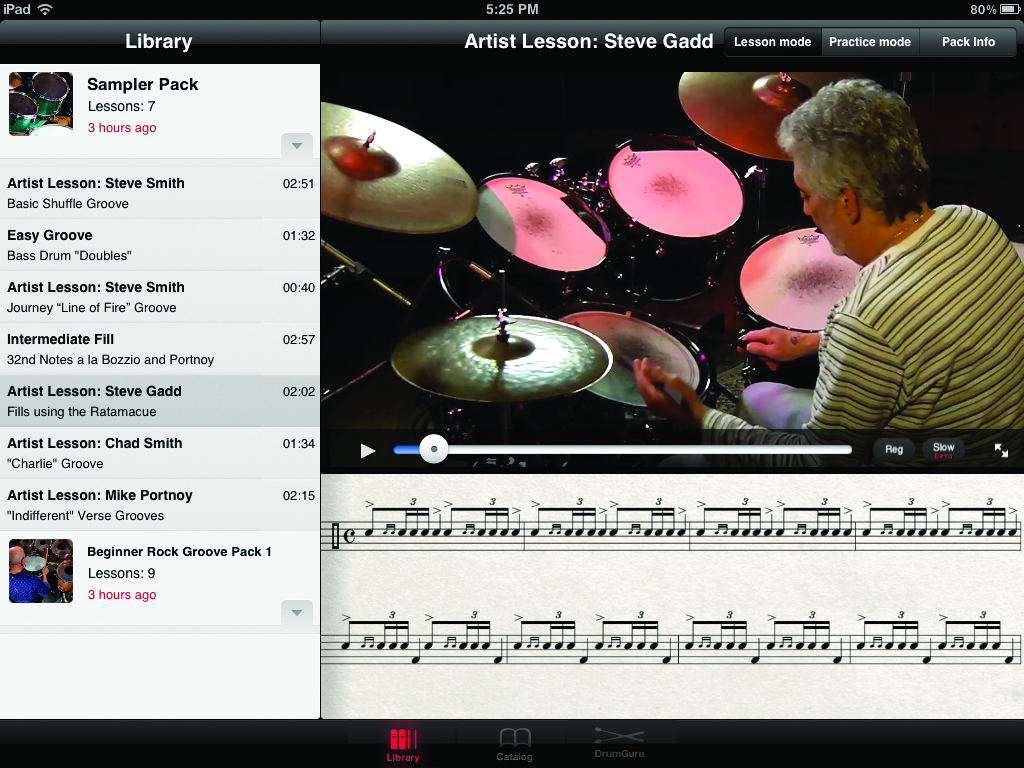 Drum Guru (iOS and Android)
Drum Guru for iOS and Android is a training app for drum enthusiasts of all skill levels, and features lessons delivered in video and audio format by some of the world’s leading drummers.

There’s a half-speed option so you can break down what’s actually going on, and musical notation and transcription of each lesson that can be viewed while watching the video.

Interactive practice mode enables you to play along with or without a click, looped and at different tempos. Lessons are divided into packs of 8-10, categorised by style and skill level. You can add more lessons for not very much money via in-app purchase in the style you want to learn.
Web www.drumguru.com Price Free 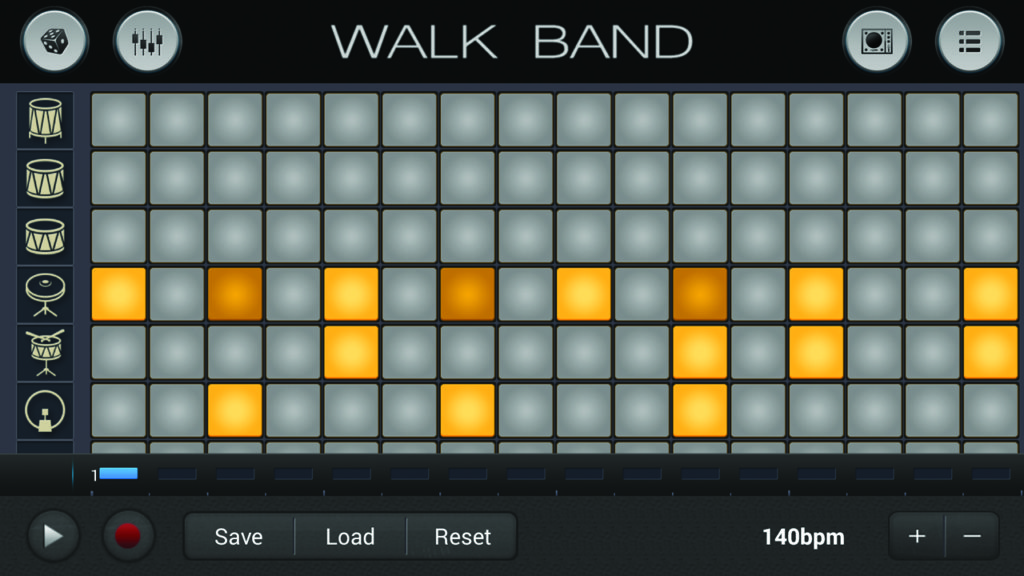 Revontulent Studi Walk Band (Android)
This popular app for Android gives you a range of virtual instruments to play on the move. There’s a virtual piano with single or dual rows, two-player mode, along with pressure sensitivity, key-width adjustment and five keyboard sounds.

You can record MIDI and audio and set your recordings as a ringtone.

The virtual guitar has chord mode and three model types, and there are also five drum kits that you can play using virtual pads. Bass and synths round off the package, and there’s support for external MIDI keyboards over USB MIDI. It’s possible to add more instruments through in-app purchases. If you’re after a free way to play music on the move, this could be for you.
Web play.google.com Price Free 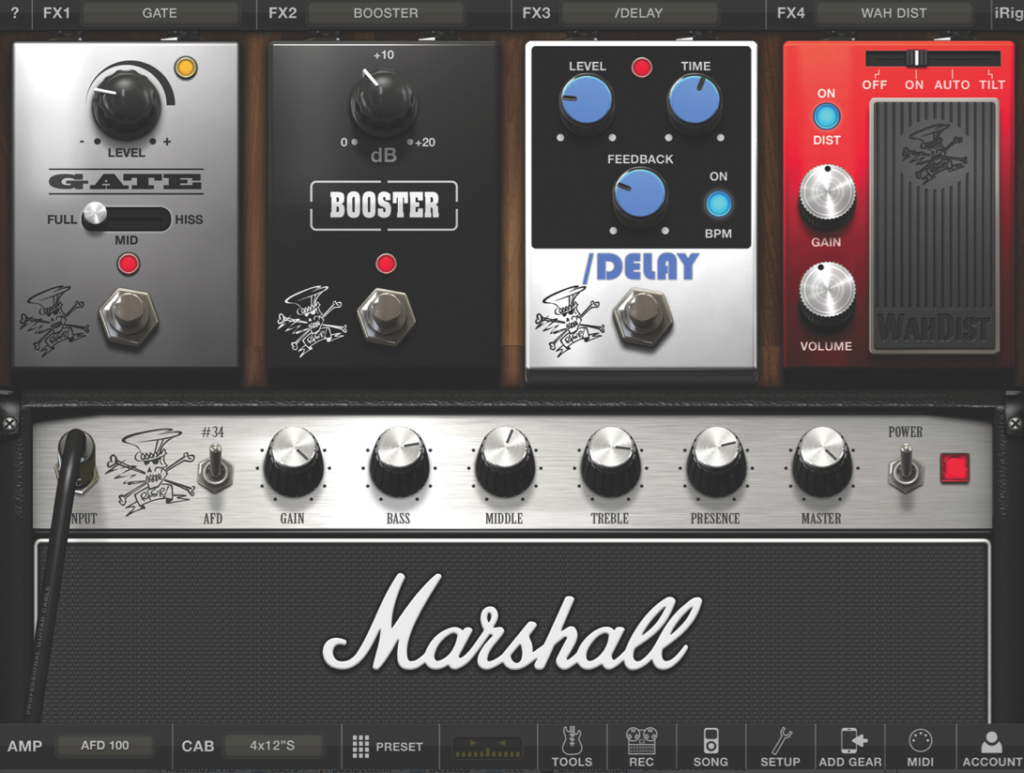 IK Multimedia Amplitube (iOS)
AmpliTube Free for iOS brings a beautifully designed set of guitar processors to your mobile device and it works using either the built-in mic or a connected interface to get sound into and out of the hardware.

You get four simultaneous stomp boxes, an amp head, cab and mix and you can add more gear by purchasing in-app. There’s a single-track recorder, again expandable to eight with master effects if you choose, and a tuner and loop drummer module to play along to.

Inter-app audio and Audiobus are supported for touring sound internally and imported songs can be slowed down for you to learn themmore easily.
Web www.ikmultimedia.com Price Free

IK Multimedia iRig Recorder Free (iOS and Android)
The app is designed to work with IK’s iRig Mic models but will work with any mic. If you want to record on the move and then clean up and upload your sounds, try it now.
Web www.ikmultimedia.com Price Free 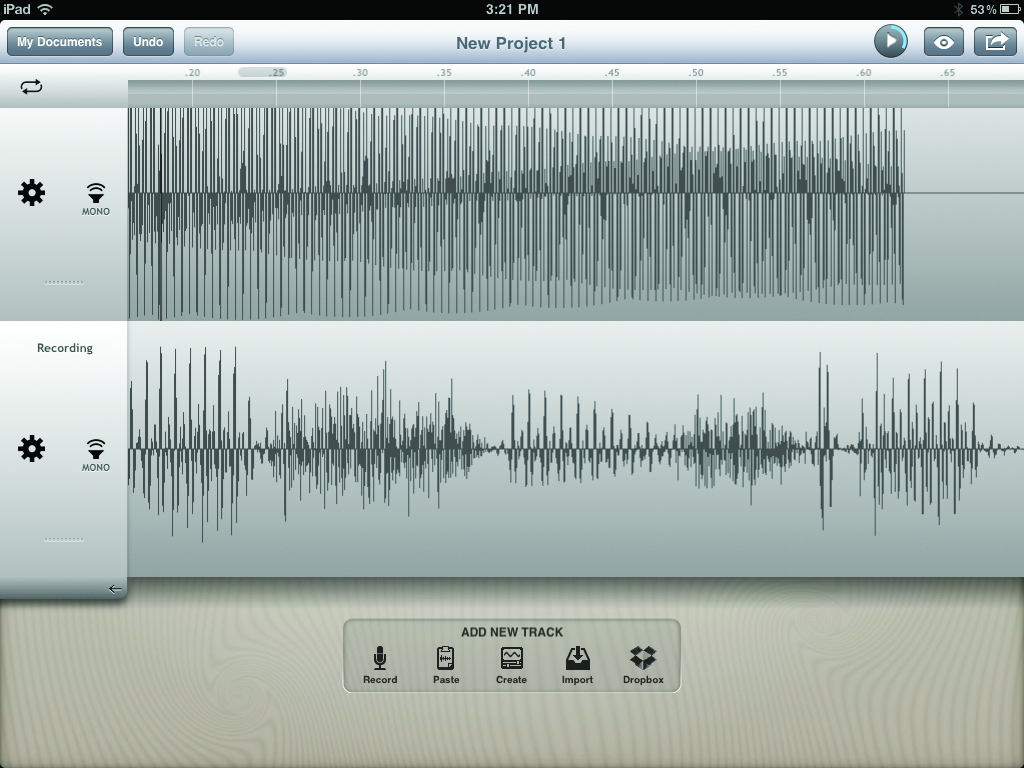 Hokusai Audio Editor (iOS)
This audio editor for iOS supports multiple tracks, and you can edit them side by side, mix together, export to WAV or MP4 format and send them to your computer, DropBox or to another app inside your device.

You swipe and zoom to select areas of audio clips, and live scrubbing means you can hear the sound as you move your finger across the waveform.