The Best Gadgets For Cool Control (Keyboards and More)

There was a time when MIDI controllers comprised just a few rotaries to control a couple of key features. Now, controllers are used for everything from grid composition to production, mixing and performance. Here are some very different, cool models… Best Added Dimensions – Keith McMillen Instruments QuNeo It’s been around a while, but if […]

There was a time when MIDI controllers comprised just a few rotaries to control a couple of key features. Now, controllers are used for everything from grid composition to production, mixing and performance. Here are some very different, cool models…

It’s been around a while, but if you want to stand out we reckon the QuNeo is the one to beat in terms of control. Pads, sliders, buttons and rotary encoders can all output note, velocity and pressure sensitivity, earning it its name as a 3D Multi-Touch Pad Controller.

The best part is each control can manipulate so many parameters, which might take you a while to comprehend. But once you do – and the QuNeo editor makes customising the device very easy – you’ll discover a level of control that is unlike most other devices. As we said when we awarded it a mighty 10/10: “It’s nice to find something that’s so revolutionary, powerful and unique at an affordable price. We can heartily recommend it.” 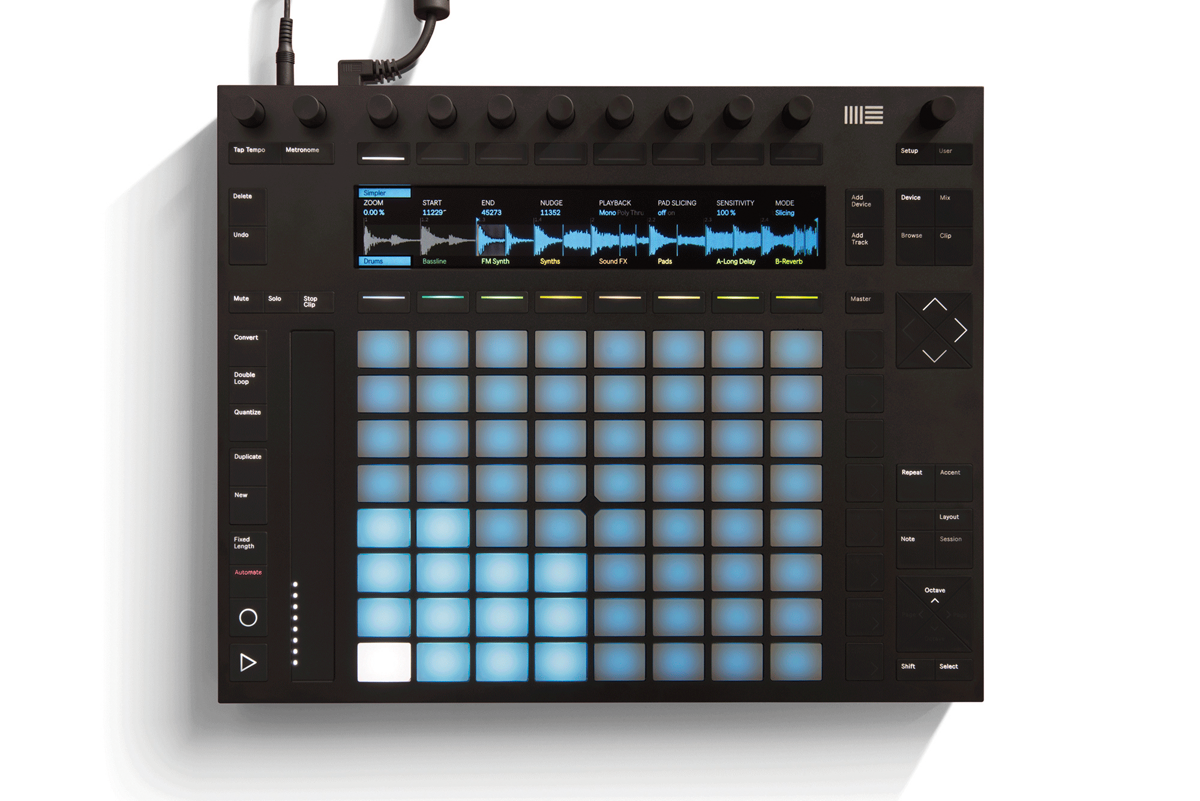 Ableton Live is the music production software phenomenon of the last 10 or so years and Ableton’s Push is its hardware master. If Live is Darth Vader, Push is Darth Sidious.

But rather than just being a controller over the software – which it obviously can and does do, better than most – Push becomes an instrument in its own right by taking some of the hidden features of Live and bringing them to the (control) surface, so realising its creative potential on stage and in the studio. Push 2 2 has just been released. 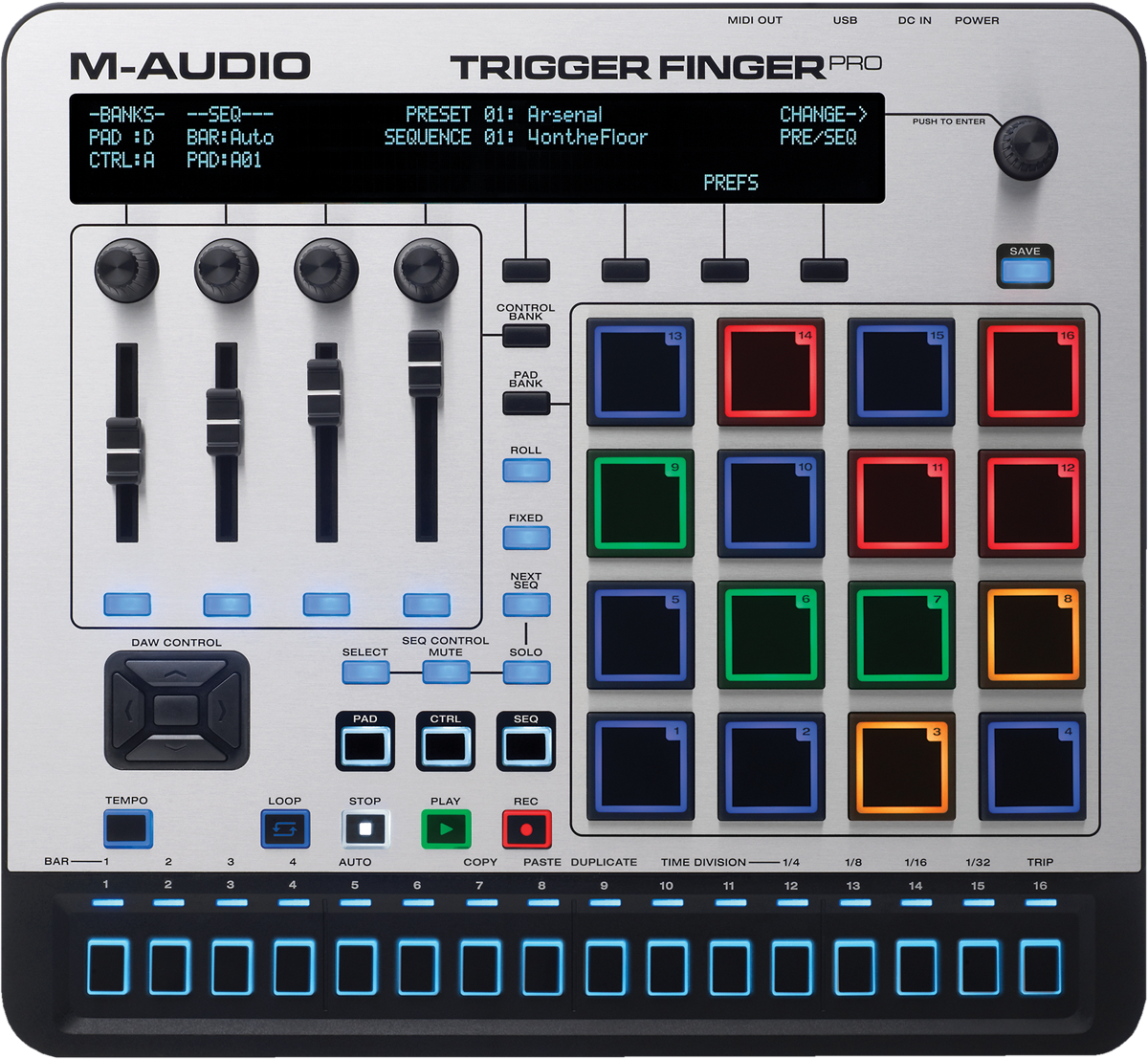 The original Trigger Finger was one of the first controllers that dared to be a little different. Before it arrived, controllers were usually a bank of rotaries or simply keyboards. Trigger Finger Pro, a much-expanded and upgraded device that’s a bit of a quantum leap from its predecessor.

Designed to be used both in the studio and on stage, or even without a computer, it has quite a few potential users in its sights. Like all good controllers of this ilk, it makes beat making a breeze but also doubles, actually trebles, its control into other areas.

It includes a step sequencer to put together both beats and melodies and it can control your DAW with sliders for mixing and rotaries to take care of plug-in duties. One of its best features is the software that is included with it – 5,000 samples, instruments including VST and Arsenal, which enables you to host VSTs with no DAW running.

We said: “A powerful and playable controller with some great bundled content that is equally at home on stage or in the studio. Lightweight, but well built, very playable and great hands-on control.” 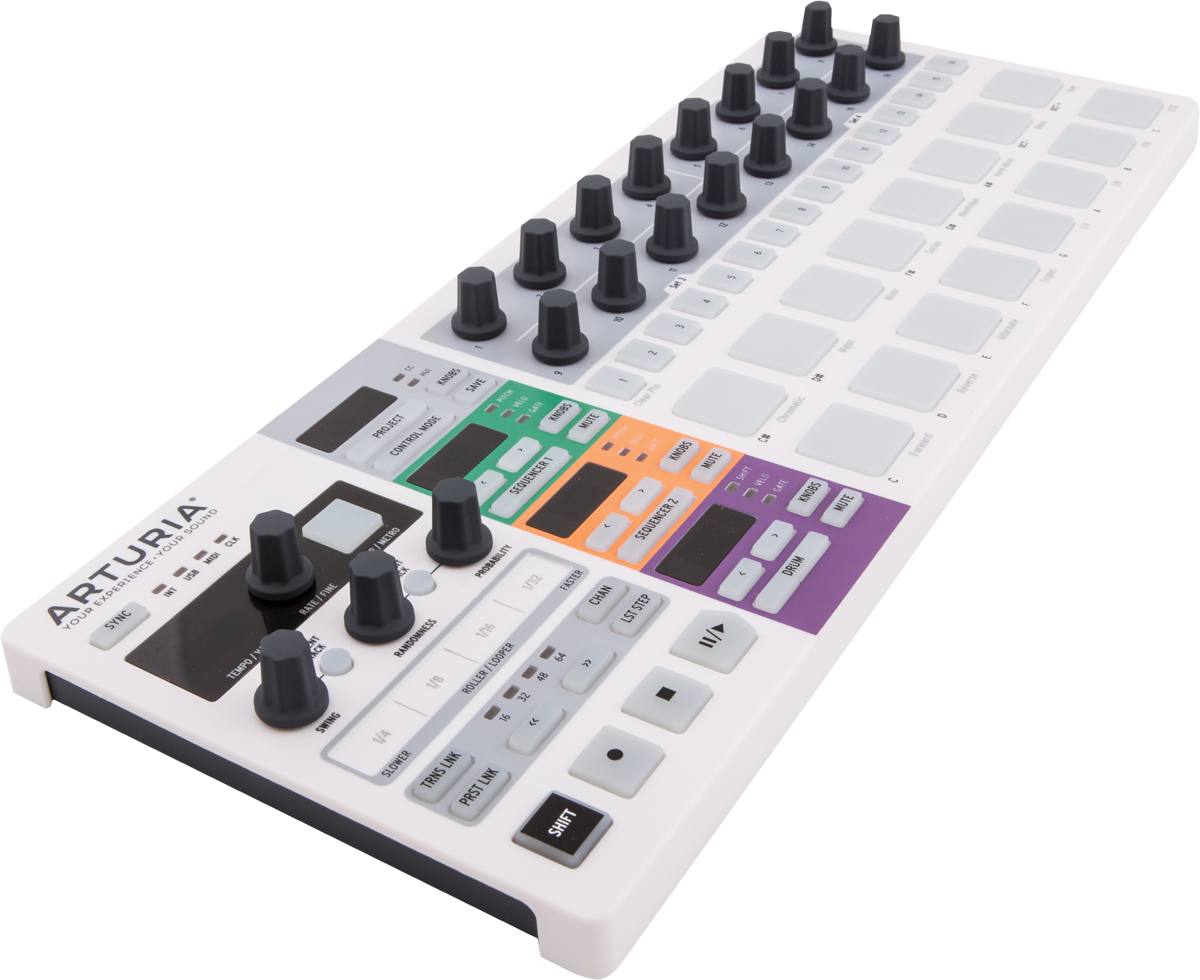 One of the best compact controllers out there, it’s not immediately obvious what BeatStep Pro is for because, in fact, it’s for pretty much everything: a controller, performance sequencer and composing tool in a single box.

You get control over your instruments, be they hardware or software, and it has a more expansive selection of outputs than you might expect, with all-important CV outs to let it get to the midst of that cool modular analogue synth set-up you either have or want.

The original Beatstep was good, but BeatStep Pro is a great step up from the smaller model for people who want to control different types of kit simultaneously, especially those who have at least a couple of the aforementioned CV-capable modules.

Even if you don’t and you’re more reliant on software-triggered or MIDI hardware-triggered sounds, there’s much to like. Workflow feels natural, and transport and remote control are possible. Arturia has struck the right balance of features, build and price, and proves controllers can be fun and modular synths needn’t be the preserve of hardcore synthesis nuts. A fun multi-talented controller and sequencer that will tie together the old and new parts of your studio nicely. 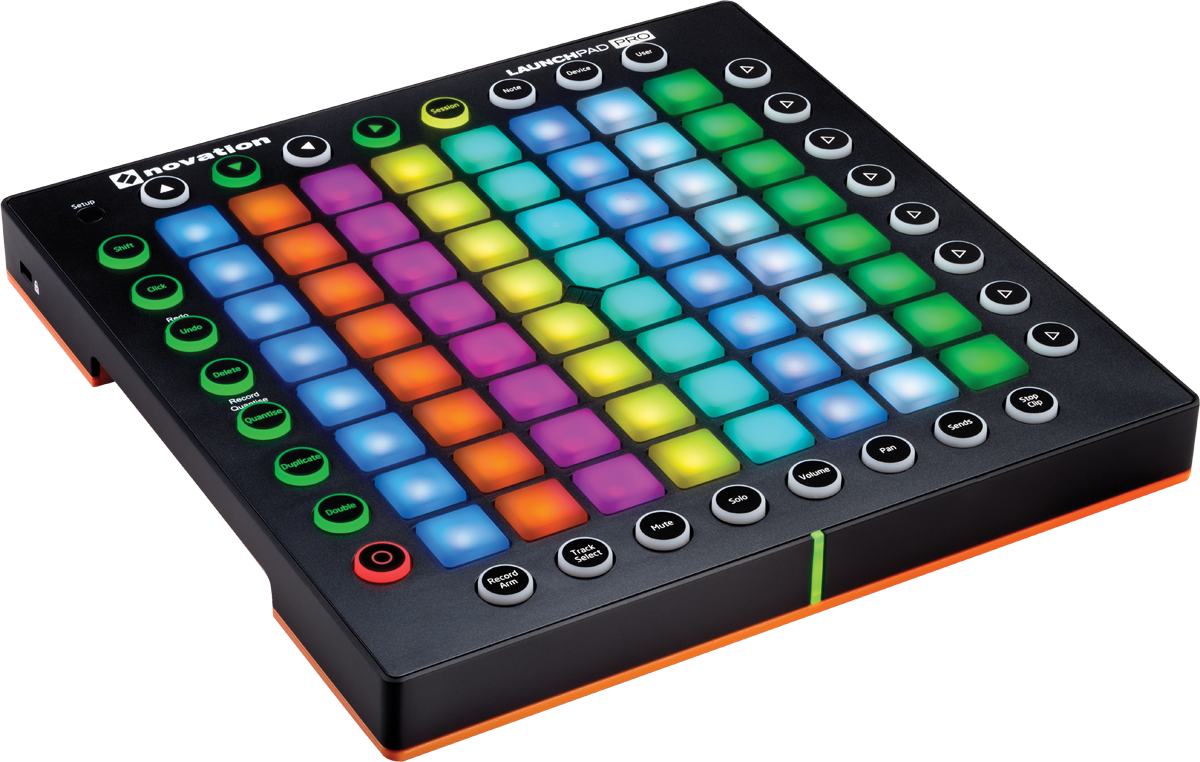 The Launchpad range takes grid-based control, made so popular with Ableton Live, into new dimensions. The Pro is a tad larger than the regular Launchpad, and as Martin Delaney said: “There’s plenty of newness to be explored, with velocity-sensitive full-colour RGB pads, hardware MIDI, mains power and an array of edit buttons; that’s at least two items ticked off my personal wish list.”

He was also very positive about the new full-colour feedback from the RGB-illuminated pads, not to mention the great ease of use including fast access to commonly used controls. The unit features brilliant velocity-sensitive faders, the hardware MIDI out for synth control is dead easy to set up, and it’s fun to use, what more could you ask for?

“In the studio, it’s not as powerful as Ableton’s Push in the beat and device control departments, but for other situations, the Pro is a flexible, expressive, interface, for your clips, instruments, and just about everything else.

This is a great update all-round, and takes the Launchpad to a new level of Ableton Live control and performance. If you already have a Launchpad, you’ll be itching to update. If you don’t have one, the Pro is the perfect excuse to get on board.” 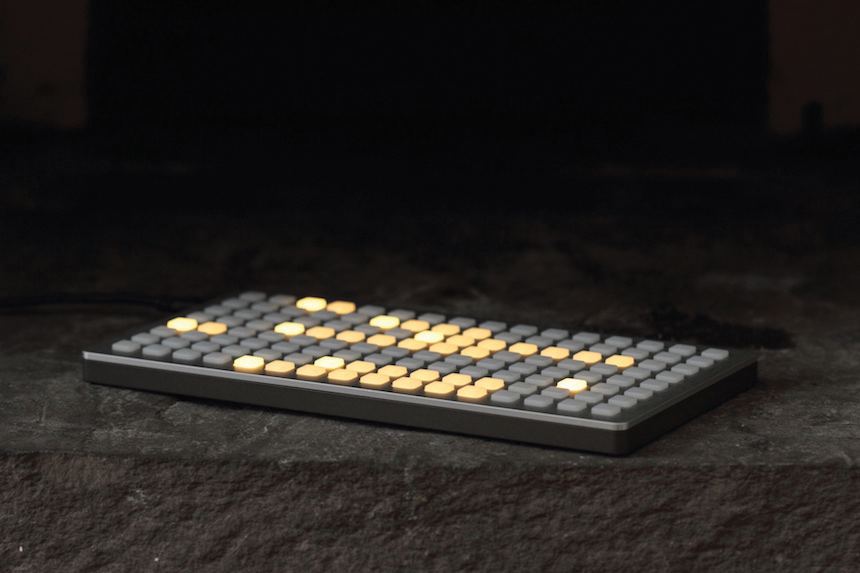 Next to the other controllers in this round-up, Monome stands out rather like a geek on a catwalk. It’s been around for the better part of a decade and now comes in Grid or sequencer forms.

The former is a 16×8 grid and is the most recognisable, kind of like the Yamaha Tenori-on in terms of its lights, but minus the (not so great) FM sounds. It’s a USB box and you pretty much define its purpose – anything from step sequencer, to DAW controller and way beyond.

We love the thinking and the open-ended nature. $700 doesn’t seem too much to be part of the coolest bunch of geeks on the music tech planet. ‘Isn’t is just a bunch of buttons with lights?’ asks a question on the website. ‘Yes, isn’t it wonderful?’ is the response. You’ve gotta love that. 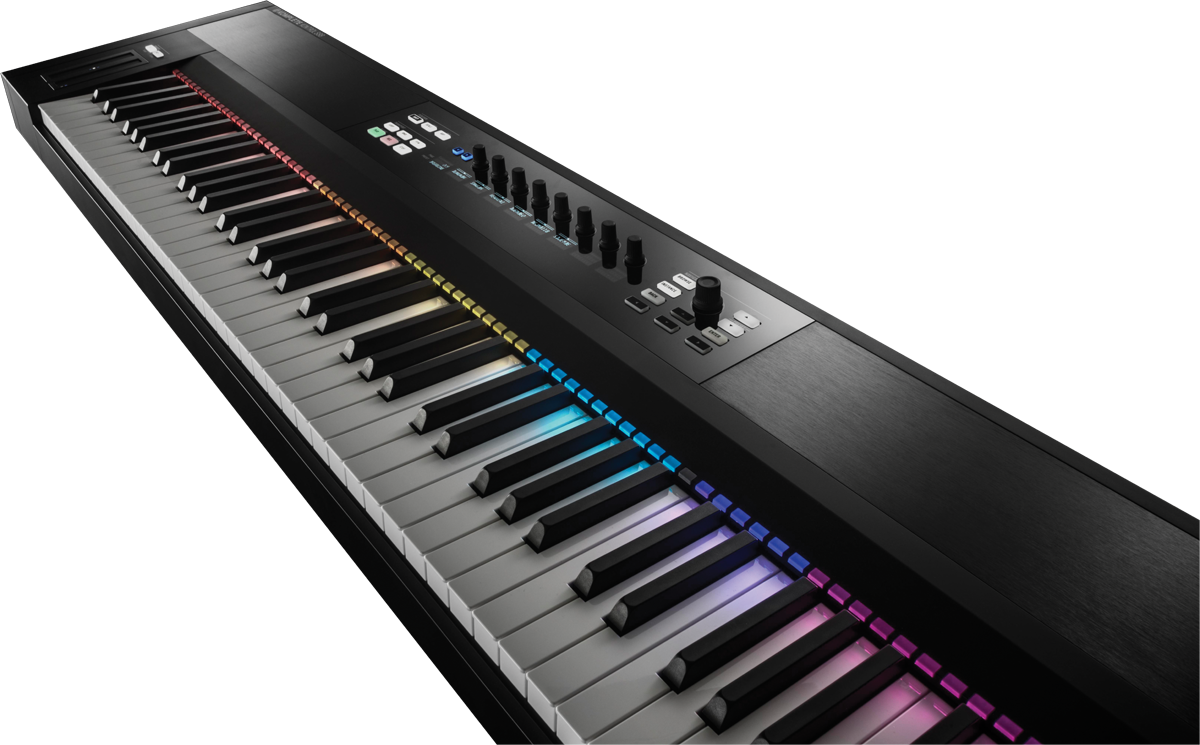 Alongside the Akai Advance series, Komplete Kontrol is just about the best keyboard controller out there in terms of total software integration. The idea of a great hardware controller is you can turn away from your computer and do a lot of your noodling actions without it.

Komplete Kontrol enables this more than other options by not only having classy displays, but multi-coloured, lit-up keys that replicate the coloured key zones when using NI software. The Komplete Kontrol software has also recently been updated to v1.5 and you get a bunch of free Komplete Select NI plug-ins, plus the fact there’s a brand new 88-note version. That’s 88 lit-up multi-coloured keys. Swoon.

Edit With the latest iteration of Komplete Kontrol just a month away from writing (Sep ’17), expect to see an updated review in the near future.

But Whatever Happened To – Jazzmutant Lemur and Dexter 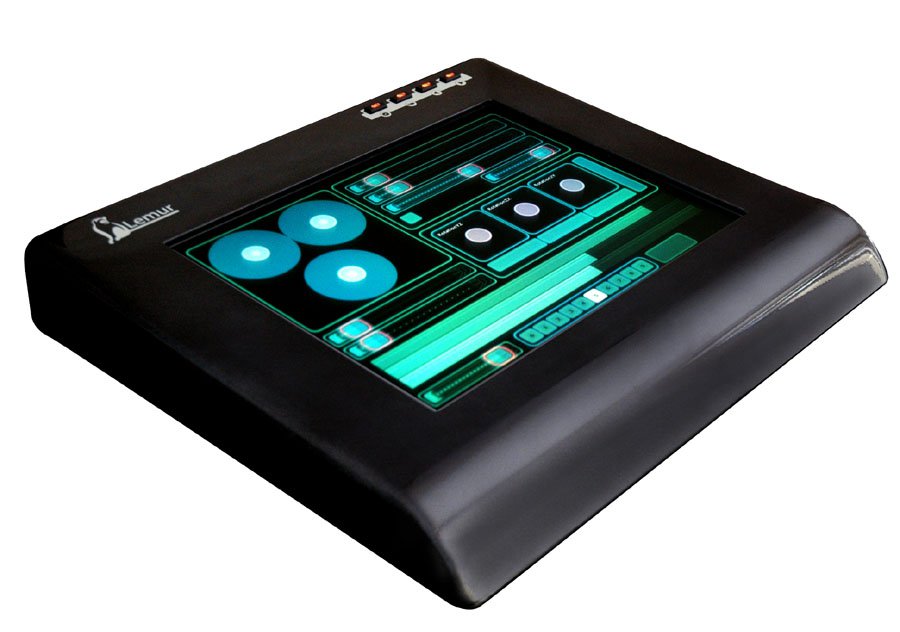 French company Jazzmutant released the first multi-touch controllers especially for music producers in the forms of the Lemur and Dexter. The Lemur could control pretty much anything you defined, while Dexter was aimed at specific DAWs (Logic, Cubase, SONAR and Nuendo).

These sleek, black units still look as if they are from the future, and were always a wormhole ahead of their time, not to mention expensive.

Perhaps unsurprisingly, the iPad offered a similar experience for far less cash and the Dexter continues within that format. The Jazzmutant website highlights v2 software for the hardware, although we assume that hardware is no longer made. The app is well worth checking out and if you can track down the units second-hand they are still damn cool. www.jazzmutant.com