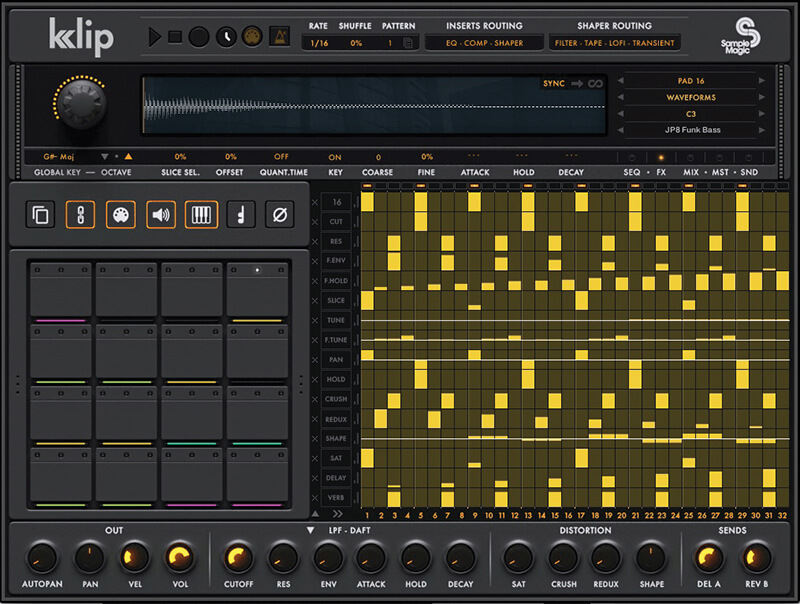 Sample Magic is best known for its huge range of sample collections – as it should be with a name like that – and this is something of an extension of those. Klip represents the best of those collections – some 1000 hits and loops from 40 titles – all controlled, sequenced, tuned and filtered within one Kontakt instrument.

We said: “There’s a massive 16 lanes’ worth of programming for each sound which includes velocity, tuning, panning and hold time, cutoff, resonance, filter-envelope amount and sample-slice position so you can quickly turn simple sounds into complex, glitch-techno monsters! Even if it was just samples, Klip would be an excellent-value library, but with the addition of a fun and flexible modulation system and extensive routing, it becomes an inspiring toolbox for generating creative ideas.” 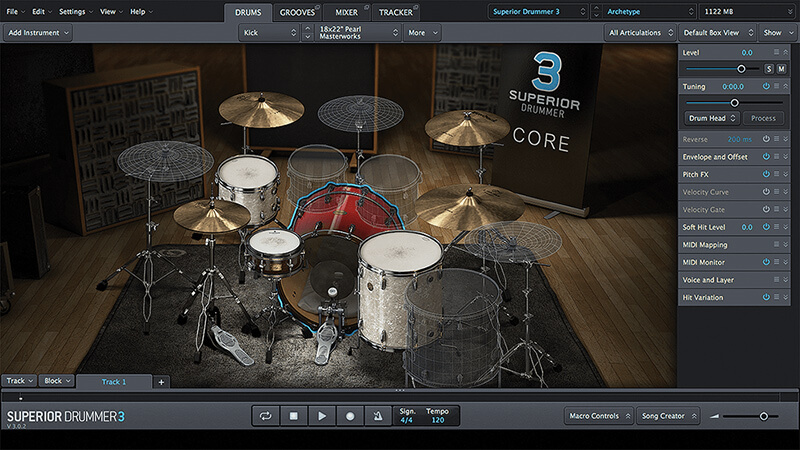 When you have the confidence to call something ‘Superior’, you’d better make it good. Toontrack has fortunately refined Superior Drummer into what can only be described as the ultimate drum software for the latest version 3. It features no less than 230GB of drums sounds recorded in the incredible Galaxy Studios by legendary engineer George Massenburg so you know you’re getting great content but SD3 also provides everything you need, from ultimate kit creation to the final song. It’s a drum DAW essentially…

We said: “You can probably tell from our Excellence Award that we’re in no doubt as to the quality of SD3 on its own merits. Superior Drummer 3 lives up to the title – the kits are great, it’s got the tools, options, content and the flexibility – everything, in fact, you need to deliver a full, organic drum track. It offers unrivalled creative control, customisation, loads of content with incredible detail, and will take care of drum production from start to finish.” We liked it, then… 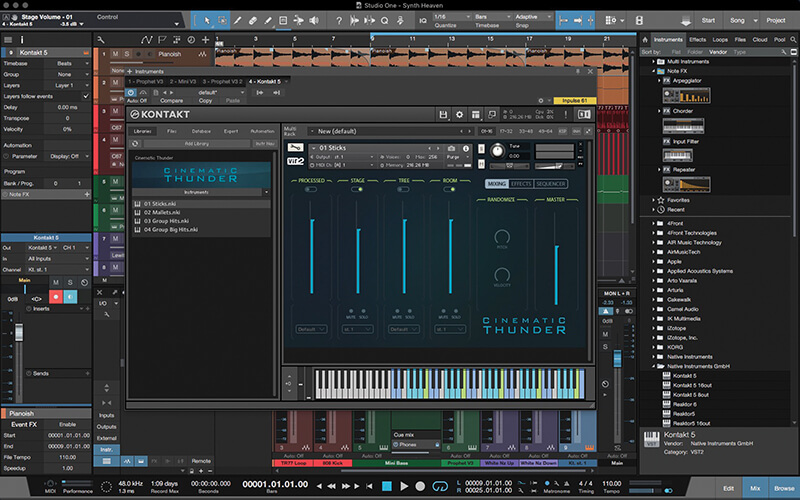 If your budget can’t stretch to the Zimmer libraries here then this collection might be what you’re after if bombastic cinematic percussion themes are what you are after. This is a 5GB Kontakt collection of huge sounding drums divided into Sticks, Mallets, Group Hits, and Group Big Hits. Each was sampled with up to 14 velocity layers and you can sequence and roll them together to create your soundtracks with a heavy dose of effects to really spice things up.

We said: “Cinematic Thunder is a high-quality tom library meant for orchestral compositions requiring high energy, massive impact, such as action trailers and movie scores – and in certain hybrid productions. Even with the little bit of noise in one or two samples, this is still an excellent library that could easily find a home in hobbyist, semi-pro, and pro composer’s libraries.” 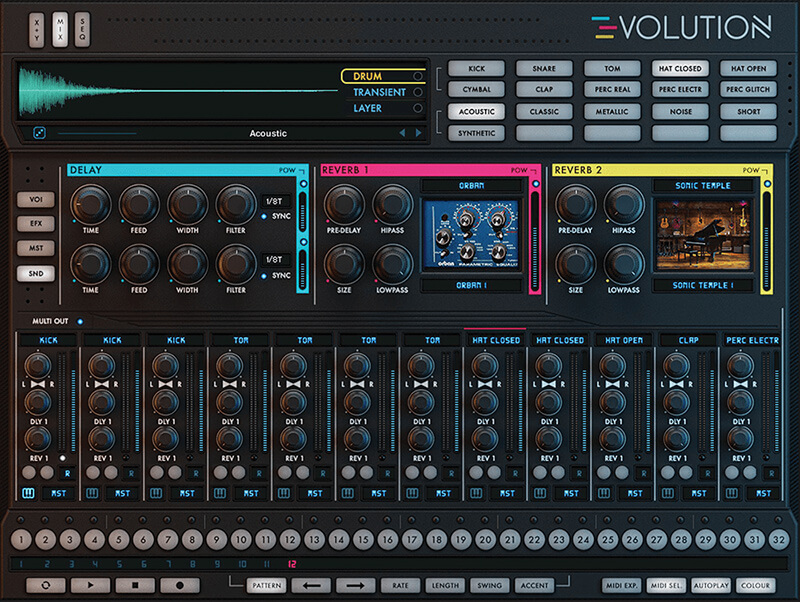 Wave Alchemy has spent the last five years putting together this Kontakt instrument. Essentially think of it as all the drum sounds you’ll ever need – plus a good few thousand you might not – wrapped up in one instrument. There are no less than 28,000 samples in Evolution which has a core of three engines to handle them all. Luckily there’s a good amount of categorisation plus three pages where you can edit, sequence and mix beats from the engines not to mention a range of effects to give everything a final fine tuning.

We said: “Ultimately, you’ll get the most out of Evolution if you combine the exquisite hits into your own kits and get creative programming patterns. Luckily, the interface has been fine-tuned to make this a fun and intuitive task. Although it’s not cheap, Evolution features deep editing possibilities and an incredibly large and versatile library of production-ready sounds for a range of genres.” 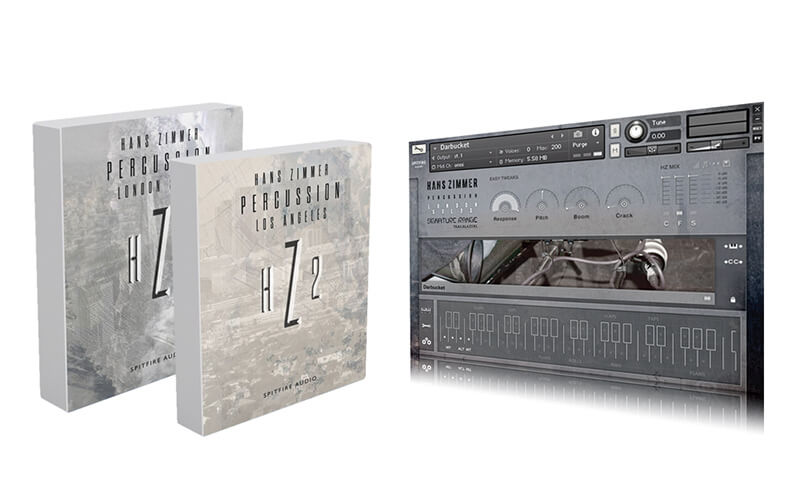 OK technically this is two collections but we reviewed them at the same time and they’ve both got the mighty Zimmer name on them. HZ02 is Hans recording ‘rock aristocrat’ Jason Bonham playing his enormous sounding DW Vistalite kits at various legendary locations in LA while HZ03 is a collection of Hybrid Cinematic Widescreen percussion recorded in London’s AIR Studios, and performed by percussionist Frank Ricotti. You can set up kits, mic positions, everything you need for perfect rock and cinematic percussion and there’s an extraordinary attention to detail with every result, as you’d expect from the master sound designer.

We said: “Both of these libraries have been beautifully recorded and immaculately produced and offer a huge array of drum hits and sound-shaping possibilities. Hans Zimmer, as we all know, is primarily an Oscar-winning composer of countless films and he has developed a truly unique approach to cinematic sound production that has been widely imitated. What you get here, though, isn’t a copy. It’s a recreation. He has used the same team of engineers and performers that were responsible for many of his film soundtracks, and even used many of the same recording locations. So, if you want the real thing, these two libraries will serve you well.” 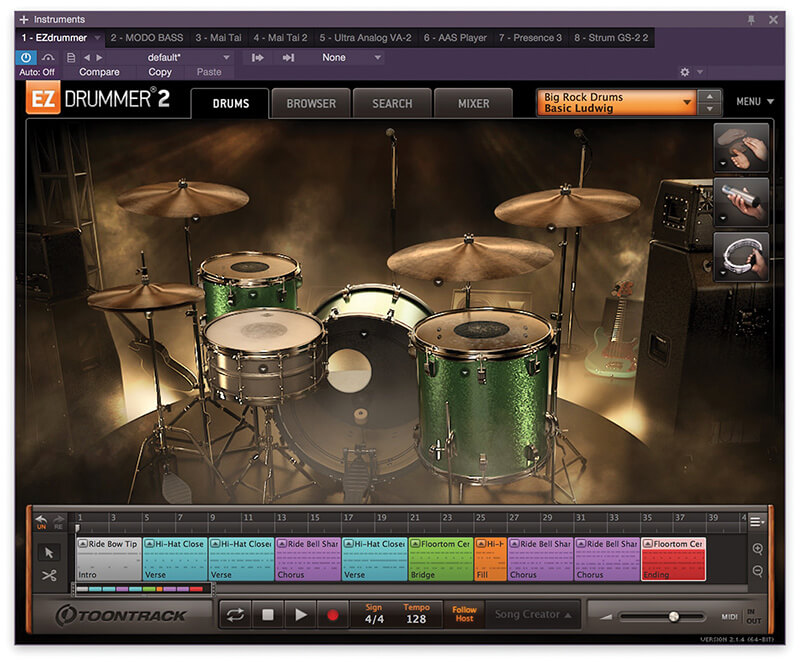 With a couple of collections for cinematic percussion and a couple for dance beats it’s probably worth going rock for our final software beat maker. Big Rock Drums features five kits by Camco, C&C, Gretsch, Ludwig and Mayer Bros. If you don’t know one end of a kit from another – and we don’t and that’s why we use computers – each of these was apparently selected for its innate ability to capture the sound and feel of 70s and 80s rock bands. So basically think big, think loud, think long hair. But it’s not just for that, as we concluded…

We said: “This pack is intended to give you the sound that was a big part of the invention of the metal sound of the 80s and even influenced the grunge-rock sound of the 90s. But these kits can be employed to great effect in independent projects requiring an earthier, more natural sound than the crystalline drums of much modern pop and rock. Use these in grunge, rock, indie, earthy pop – whatever you want. Just remember: they may very well take over your production with their huge sound and attitude. Brilliant drums!”