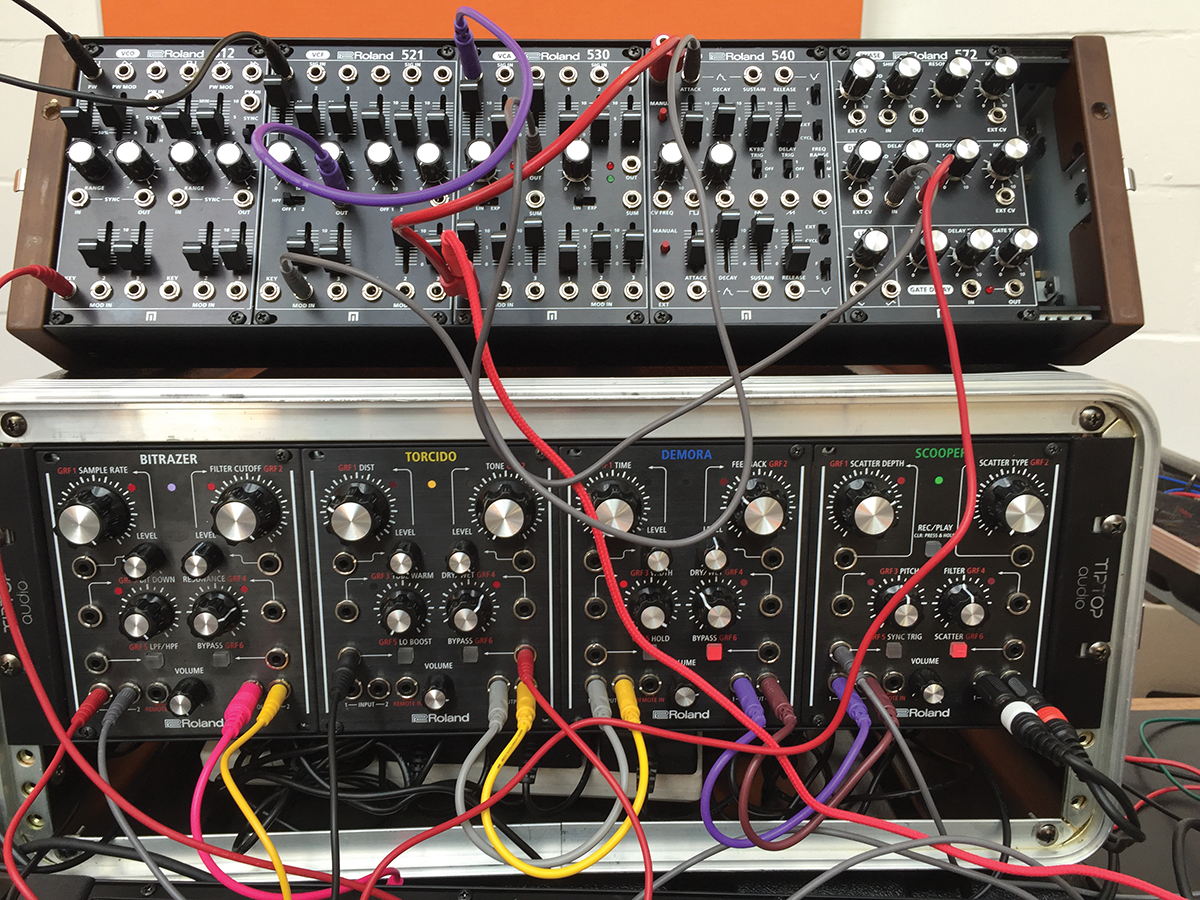 Dave Gale reports from the 2016 Brighton Modular Meet, held on on the sunny South Downs…

Sussex University was the venue for this year’s Modular Meet in Brighton.

In a rather beautiful setting, at the top of the South Downs, Sussex University recently played host to the annual Brighton Modular Meet, offering modular users, designers and general modular folk, a place to hang out with similar minded people and discuss all matters, well, modular. 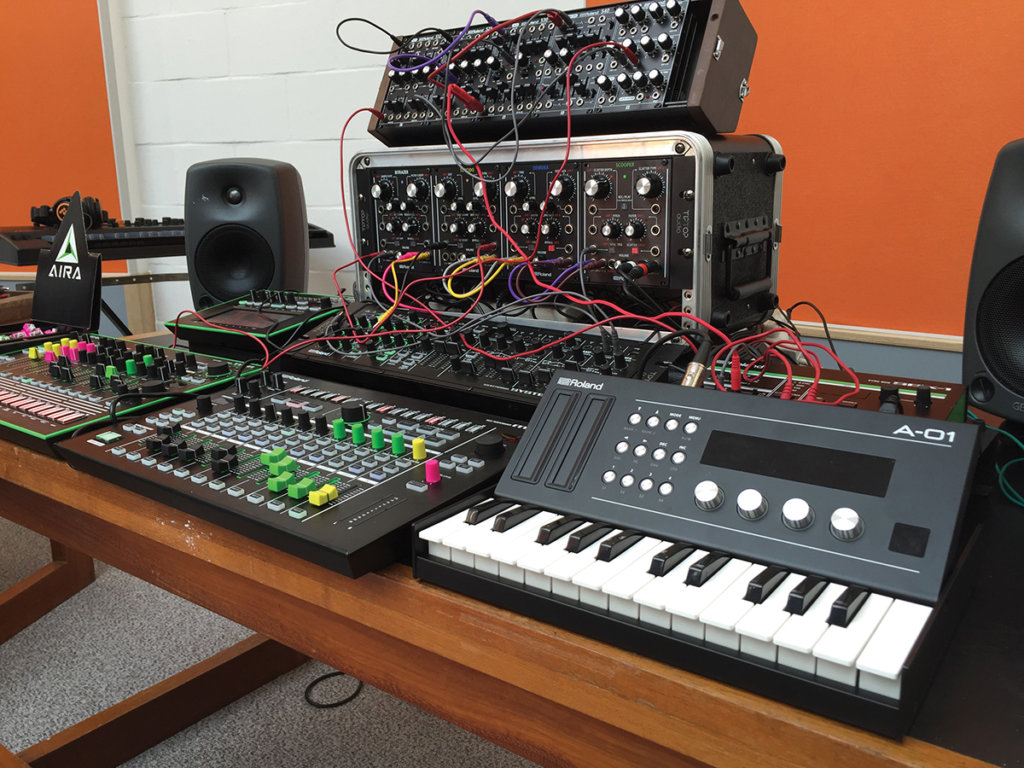 More Aira than you can shake a stick at! Plenty of demo kit from Roland.

Apart from many members of the general public, who had brought along their modular and sometimes quite esoteric kit, there was a very healthy contingent of companies keen to announce and show their wares.

ALM Busy Circuits had a clutch of new modules to show off; the Fizzle Guts is a new dual channel filter, centred around the chip from the old Casio FZ-1 sampling keyboard, and sounding suitably crunchy as you would expect. Resonance is stepped, which makes for an interesting oddity of the design, but be forewarned: for the moment, the unit is on a very limited run. 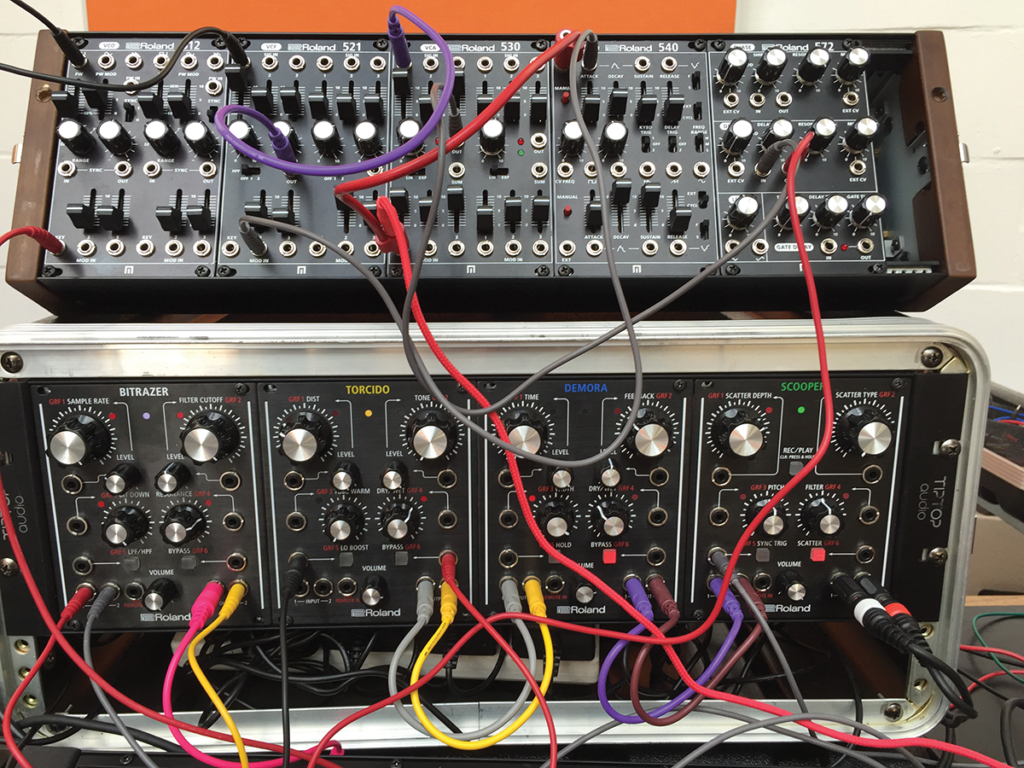 The new System 500 from Roland was proving very popular…

Also on demo was the new PE-1 EQ, which is based on the Tascam Portastudio EQ, demonstrating another simple idea, but full of interesting character. Finally Akemie’s Taiko is essentially a drum module, based around FM synthesis, sounding unique and a good companion to ALM’s other Taiko modules.

Abstract Data had a nice demo rig, demonstrating its love of minimal techno. The company’s ADE-32 Octocontroller module is a beautifully designed, multi-purpose unit, which offers all sorts of useful modulation and triggering sources, sometimes loop based, and sometimes random. Thanks to the elegant display, it’s very easy to see what is being controlled, and the latest firmware update (just released) refines certain elements of functionality even further, including muting options and transport control. 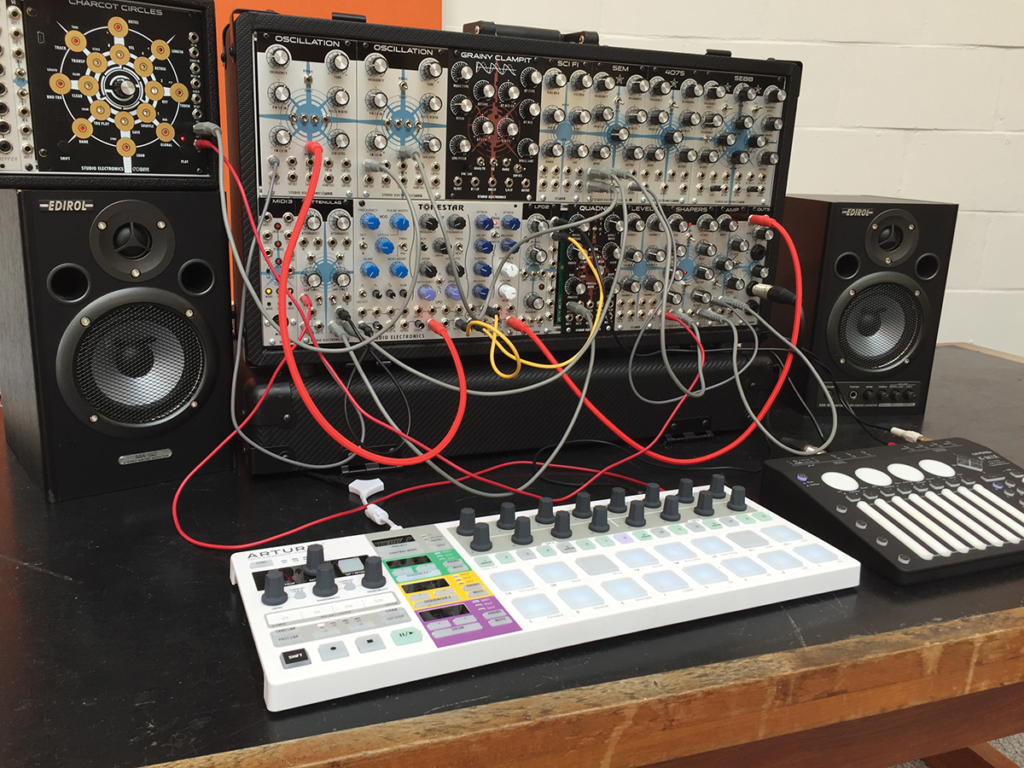 A whole lot of Boom from SE! Plenty of modular options to suit all budgets

AJH Synth was showing its latest offerings, alongside the classic MiniMod Model D clone. The outstanding new Rings SM module offers a Moog style mixer, ring mod and sub-octave generator, all in one unit, sounding huge and full of colour, while the soon-to-be-released Sonic XV filter is based on the Moog Musonic V synth, and described by AJH as a ‘Diode Ladder Wave Filter’. In typical AJH style, there’s much more on offer here than a standard filter, including 24dB, 6dB/octave modes and a band pass mode, and the ability to input two signals, with additional wave shaping capability. 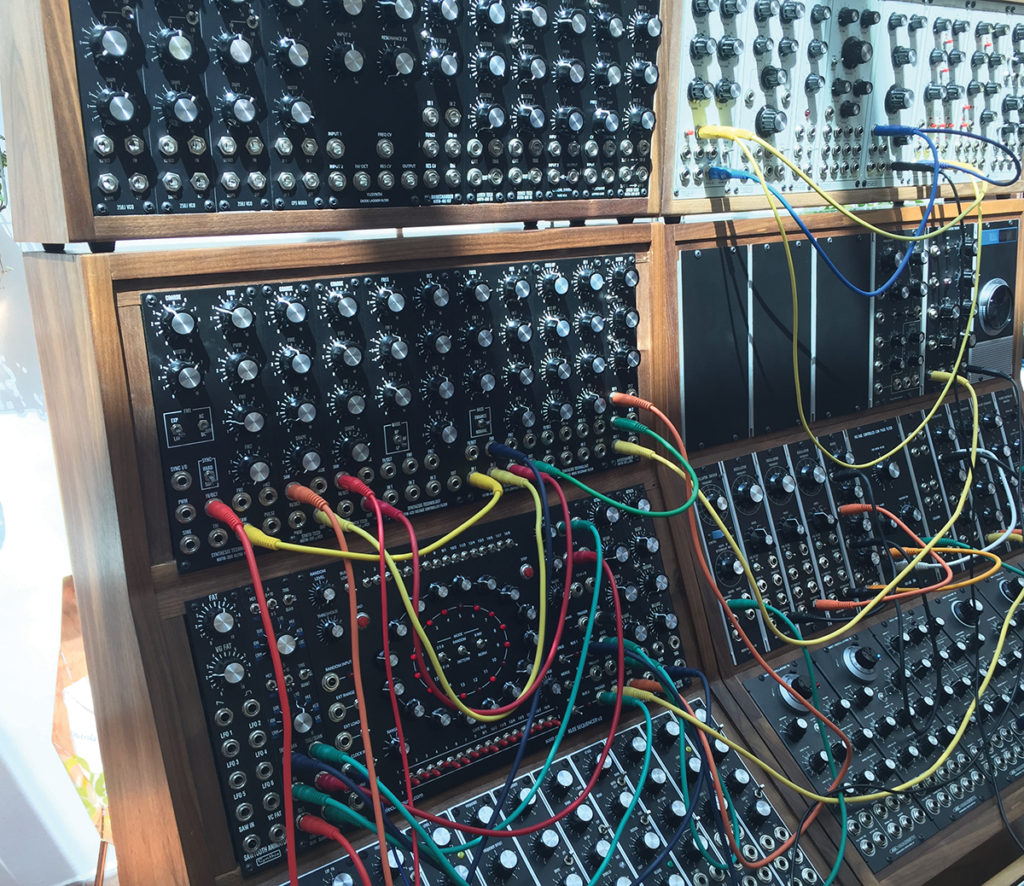 Studio Electronics was showing off its superb Sensei system, which is the full SE modular in a rather fetching Mono-Rocket case (reviewed in MT159), but for those looking for something more affordable, the new Tonestar 2600 was also on show, offering all the best bits from the SE Modular range, in a pint sized, single voice package. Alongside these two Goliaths, the new Quadnic Oscillator (reviewed next issue) module and Charcot Circles sequencer (reviewed MT160) were also holding centre stage.

As if to highlight how important these Modular Meets have become, Roland was also in attendance, with a vast array of equipment on show. The jewel in the crown was the new System 500, complete with its own matching case and sounding awesome, especially when paired with the four Aira pedals, and the rest of the Aira range. Roland was also demonstrating its new Aira Modular Customizer which, thanks to either tablet or Mac/PC software, will allow the user to literally create an entire modular system on a single pedal. It’s a very clever and highly flexible system, that offers a whole world of additional functionality to a single pedal, whether in a Eurorack, or even standalone. 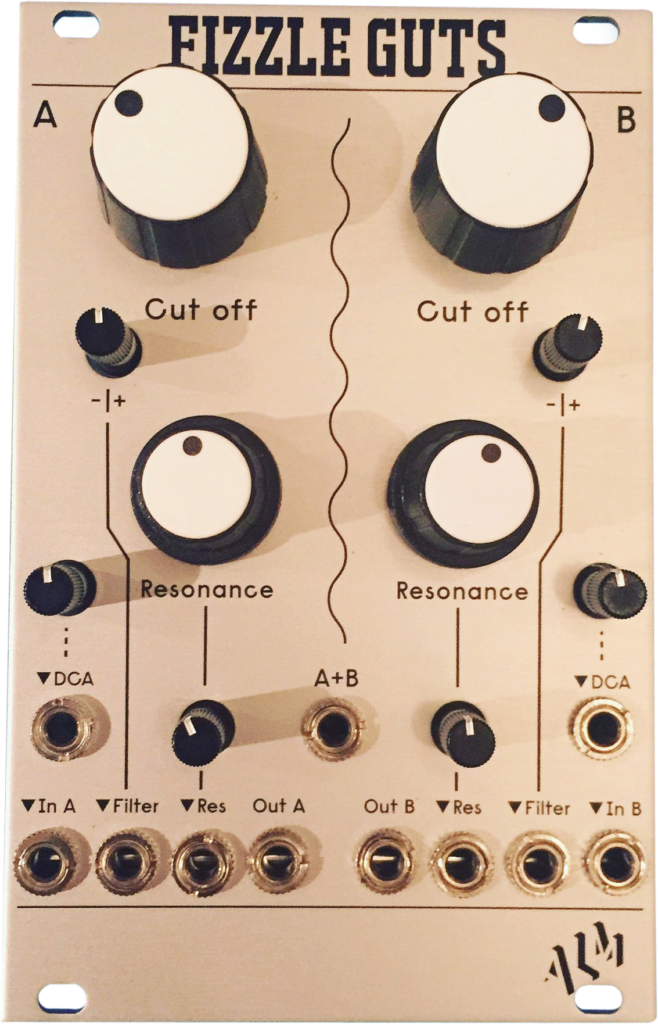 The outstanding new ALM ‘Fizzle Guts’ had its first outing, to great acclaim.

Synovatron had an interesting offering, allowing Moog Voyager users to connect their expansion ports to the VXP1 which allows the additional ports on the Voyager to be interfaced, in a convenient format, right in your Eurorack.

Some lovely techno sounds generated by the Abstract Data rig

Nobots was demonstrating its new prototype modules, under the codename The Octopodes which aims to offer a hugely versatile set of modules, particularly useful for clocking, triggering and more. The six modules on display are due to be on sale later this year, in kit form. 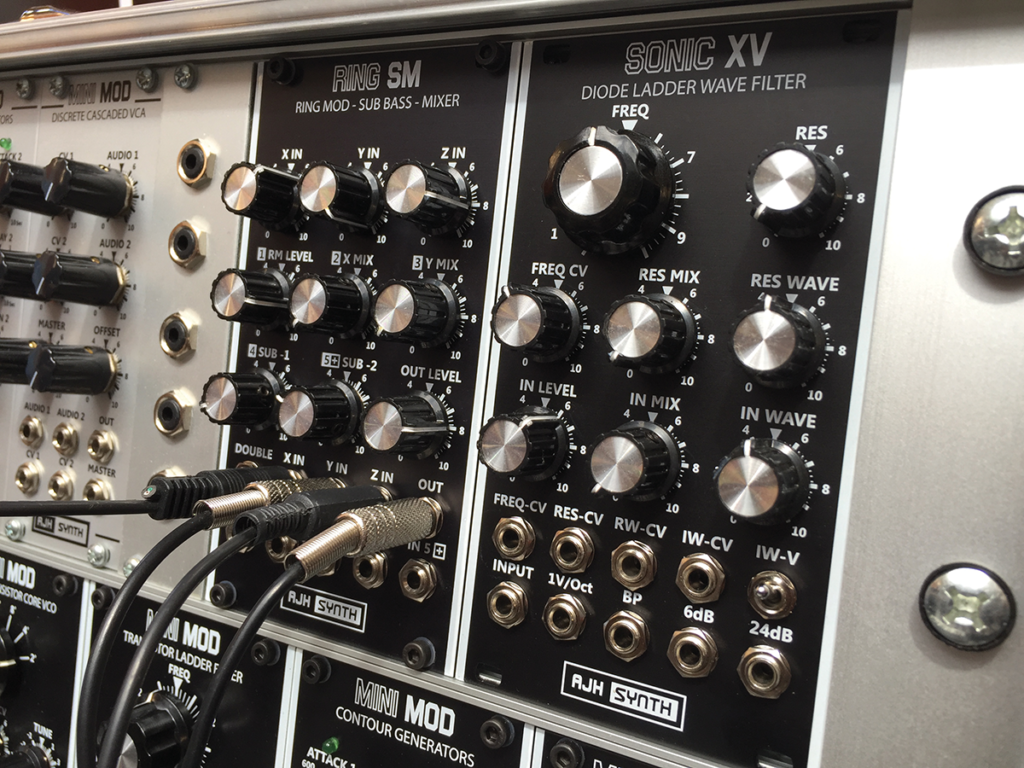 The two latest offerings from AJH: ring modulation, filtering and so much more!

And talking of kits, Thonk was very present, as one would expect being Brighton locals, with a nice shop and a couple of demo rigs. Very much in operation was the new Turing Machine Mk2 which takes the original Turing to new heights, complete with expansion capabilities. 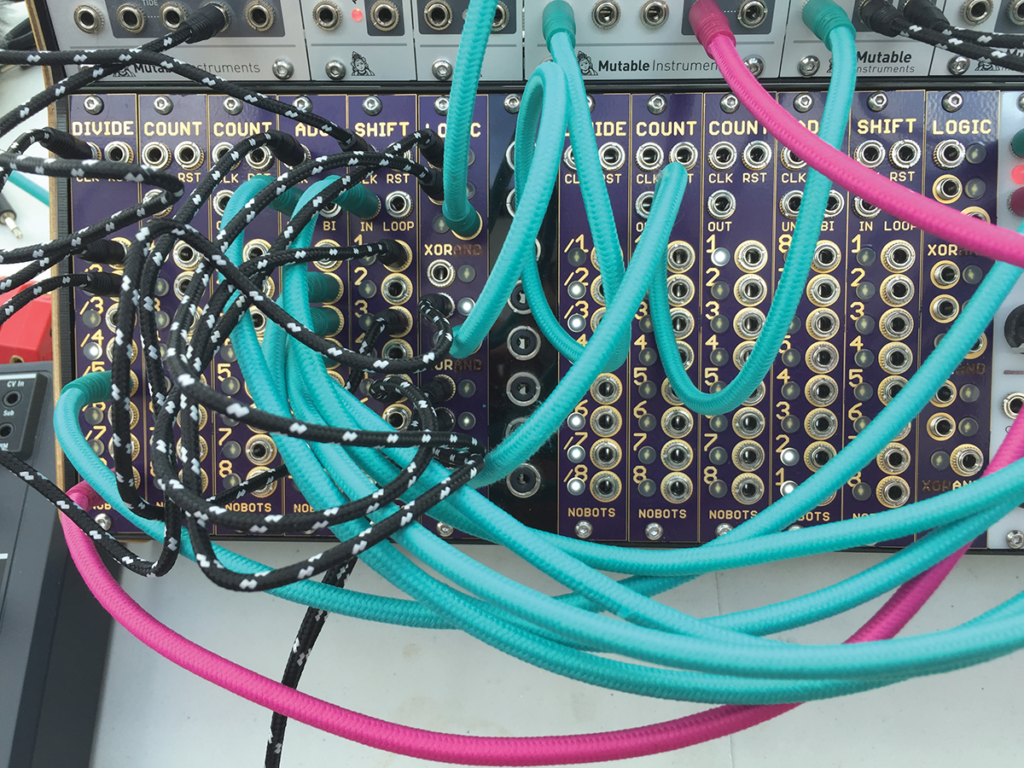 Some exciting new prototypes from Nobots. The modules are in there somewhere!

Apart from the trade and demonstrator stands, there was a steady stream of modular based performances, with notable artists VCOADSR and Dan Hignell, but one of the highlights of the day was a demonstration of the research study Mini-Oramics which is a further development of the Oramics system, originally created by Daphne Oram. Tom Richards demonstrated this exceptionally interesting concept, where the musician literally ‘draws’ onto an acetate, rather like an old overhead projector, to then see the squiggles playback, in both pitch and dynamics. 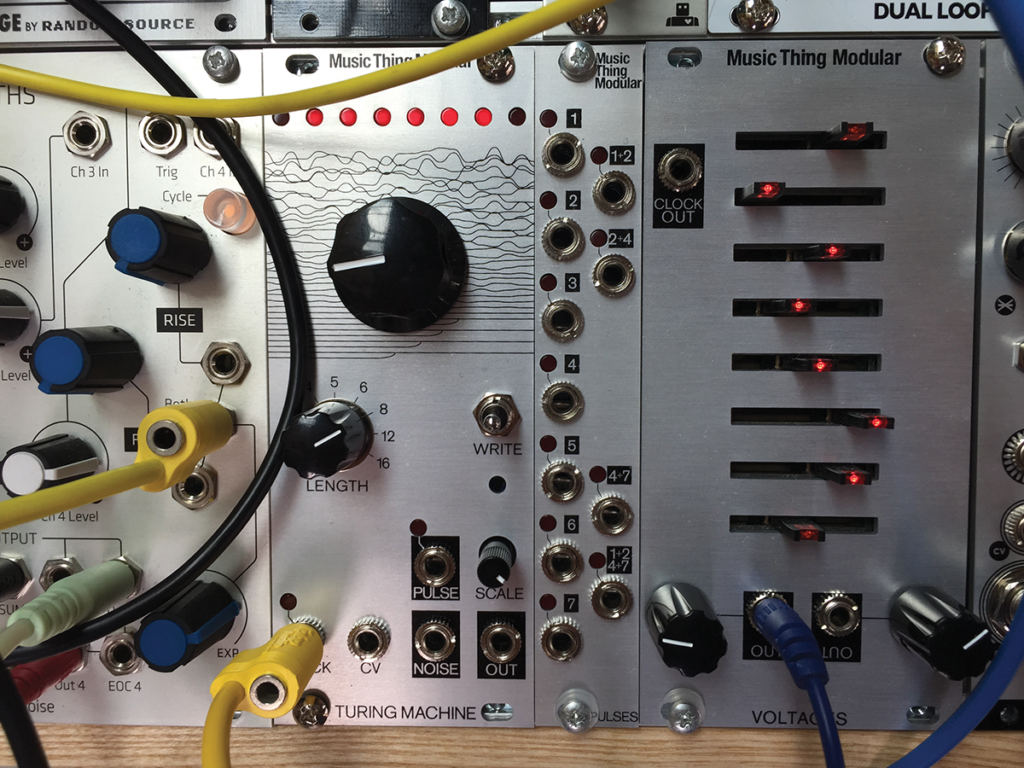 Thonk were keen to show off the wonderful Turing Machine Mk2 kit. Where’s my soldering iron?

Now very much a fixture in the Modular calender, follow Brighton Modular Meet on Facebook and Twitter, for news about further upcoming events. This was a very insightful and relaxed day out, on the Downs