From LA to Costa Rica – that’s quite a journey for one studio to take, but La Cueva del Oso Studios has taken it in its stride. Jessica Gamboa explains all… Interviewee Jessica Gamboa Contact lcolacuevadeloso@gmail.com | www.lacuevacr.com Focusrite interface Ableton ‘rabbit hole’ Live Is that an Akai sampler? Two set-ups and two different chairs! […]

From LA to Costa Rica – that’s quite a journey for one studio to take, but La Cueva del Oso Studios has taken it in its stride. Jessica Gamboa explains all… 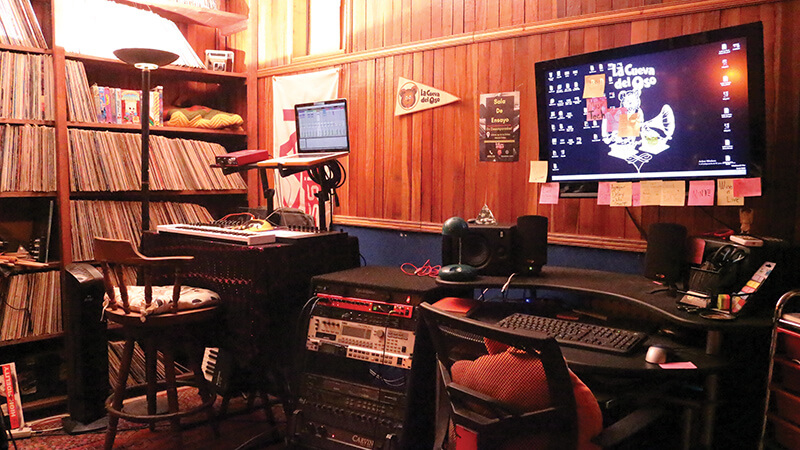 Tell us about your studio, Jessica.

Jessica The studio was really created by my father, Gerardo Gamboa. He had this obsession with studio equipment and learning how to make music through MIDI. He lived almost his whole life in Los Angeles where he started making music as a hobby, collecting vinyl and it’s where he also started his family. He moved to Costa Rica later in his life (he has sadly passed away now) so this is where the studio is currently located. I’ve been running the studio for about four years.

Ableton Live. I hadn’t used a DAW for a while before I started recording again. When I asked around what people considered was one of the best DAWS out there, many recommended Ableton Live, so I gave it a try, went down the rabbit hole and never came back.

What is your favourite studio gear?

I have to say that it is the Focusrite Clarett 8Pre Interface. There is so much you can do with a computer and controller, but just the fact that you can record almost anything with your interface and put it on the same level of sound as your beats is great. It is awesome to me.

How is the studio used? For your own music, professionally, or just for fun?

I would like to think that it’s for all three.

The studio has ended up being morelike a laboratory than anything else, so I experiment with anything that comes along, whether it’s a band or making music for video. It’s composed of just one room, but I’ve learned to study my space and just get creative with what I have.

I’ve learned that people really appreciate that cosy feel of a space that’s constantly doing different things. Sometimes we have vinyl nights and the turntables are out, and when it’s time to record drums, the turntables are moved to the back to make some space.

Also, I live in a country where everyone knows everyone else. Costa Rica only has about 4.5 million people, which is really nothing. The market is not as big, but nevertheless, Costa Rica has such a great artistic sense. People haven’t really seen what Costa Rica is capable of. The creative and music scene in this country is really on the rise.

Definitely something to extend my inputs and be able to record more than eight channels.

Does anything annoy you about your setup?

Follow your ear and taste. People really appreciate honesty in whatever it is you’re trying to communicate or express.

Have a clear vision of what you want for your studio in the long run and it will start coming together.