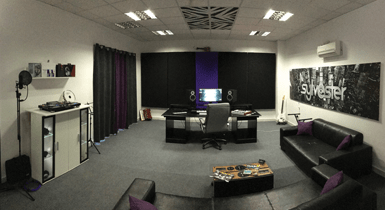 A spectacular space with some well chosen, choice pieces of gear and the greatest magazine in the world bringing it all together…

Tell us about the studio, Goran…

Goran “It’s a studio I set up a year and a half ago in Knin, Croatia.”

“The Akai Timbre Wolf synth, simply because it’s an analogue synth with four voices and has a great sound.”

“Most of the time, I’m producing my own tracks and I also make remixes, which I put into my live performances as a DJ. I’m also recording vocals for my tracks.”

Does anything annoy you about your studio setup?

“The software for my Focusrite audio interface is a little complicated to set up.”

What’s on your wishlist?

“It will probably be some new analogue-style synth – I’m thinking about the Nord Lead 4. In the near future, I’d also like to buy an Allen & Heath GS-R24 console and start recording bands.”

“Definitely the SSL Duality 48-channel console. I used to work on it and it’s amazing. The workflow is great, it has a great-quality EQ and the compressors on it are perfect.”

Any advice for other producers?

“Never give up, make your music every day, and train your ears to your studio monitors. Also, invest in yourself and get educated. I went to the EMI Institute in Zagreb and finished their audio-engineer programme.

“It was a great help; you meet a lot of people – producers, singers, musicians – and you can collaborate with them later. And don’t be afraid to ask people for help. If you don’t know something, find someone who does and ask!”