Show Off Your Studio – Part Twenty One

Though we do like to just gawp at an amazing pro studio or two – it’s often more worthwhile to actually reach out and chat about how you use your studios to make and sculpt your music, and of course, about what gear you use and how it benefits your setup. Read on… Bioslave Interviewee: […] 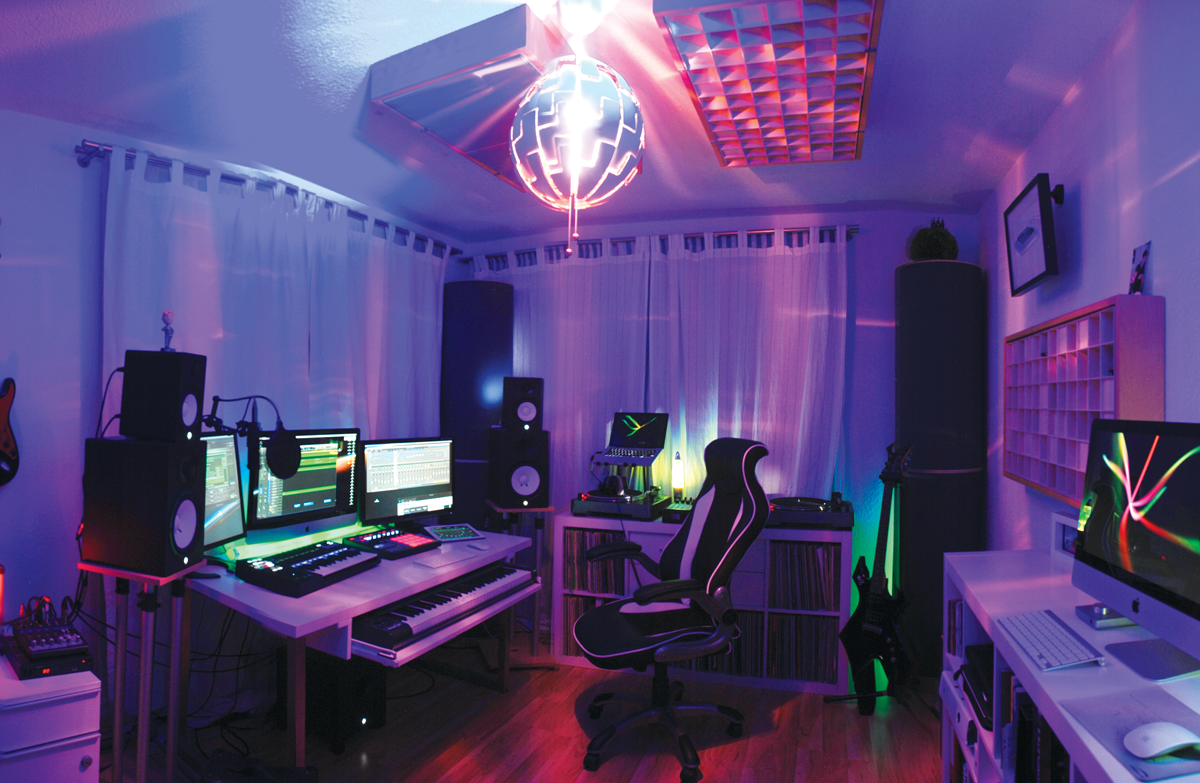 Though we do like to just gawp at an amazing pro studio or two – it’s often more worthwhile to actually reach out and chat about how you use your studios to make and sculpt your music, and of course, about what gear you use and how it benefits your setup. Read on…

MT: Tell us the key components of your studio? Just the main ones will do…

JO: I use Native Instruments’ Maschine and Komplete Kontrol. They obviously work perfectly with my NI Komplete 10. My monitors are both the Yamaha HS80M and 50M supported by a Yamaha HS10W subwoofer. The 50Ms give me the crispness and the 80M makes the sound warm and sound really great in the mids, too.

Which DAW do you use, and why?
I use Logic. I have used it for many years and for me, it is the best DAW for getting my ideas down quickly and without any of the time-consuming limitations that you find on other software. The automation function in Logic works really well, especially in combination with the stuff from Native Instruments.

What’s your favourite studio gear?
Hmm, that is a hard question to answer. At the moment, my favourite synth is Logic’s Alchemy, as it comes with tons of great sounds that really inspire me.

How often do you typically spend time in your studio?
Well, I’m very restricted time-wise by my job during the week, so I only really get to work in my studio and on my music during the weekend and on holidays. But even within this limited period, it can still be really constructive.

How do you use your setup? Do you do it professionally or just for fun as a hobby?
For me, making music is for fun. You have to spend too much time on doing it if you want to be a professional. But I have been addicted to producing music for over 20 years now, and I don’t think I will ever be fed up with doing it. It is a great feeling to hear your tracks loud in a club and to listen to people shouting and dancing to your songs.

What’s next on your studio shopping list?
I just updated my studio with a lot of acoustic treatment. Next on the shopping list is a great audio interface. I use an Apogee Duet One at the moment and I need an interface with more outputs and great audio performance.

Does anything annoy you about your studio setup?
Well, I had a lot of analogue stuff in the past and I sold it… for a negligible price. I do miss the knobs and the fatness of the sounds though, so maybe there will be a resurrection.

What is your dream piece of gear?
Definitely the Waldorf Wave. I’ve played it a few times and it is just amazing!

Do you have any advice for MusicTech readers who are just starting out on their studio journey?
The best thing is to do everything step by step, as a good music studio needs time. So first, you should sort a computer, then a good DAW and headphones. Then get more plug-ins or synths, then get the monitors.

Do you have any studio stories or anecdotes?
Well, the best audiophile performance I heard was a concert of Oskar Sala, performing with the Trautonium [a pioneering early electronic instrument invented around 1930 – Ed] a few years before his death.

This synth is so inspiring! You can create sounds like human speech or violins – all with the same instrument. The Trautonium was used for Alfred Hitchcock’s The Birds for the ‘voices’ of the birds. The concert was breathtaking. 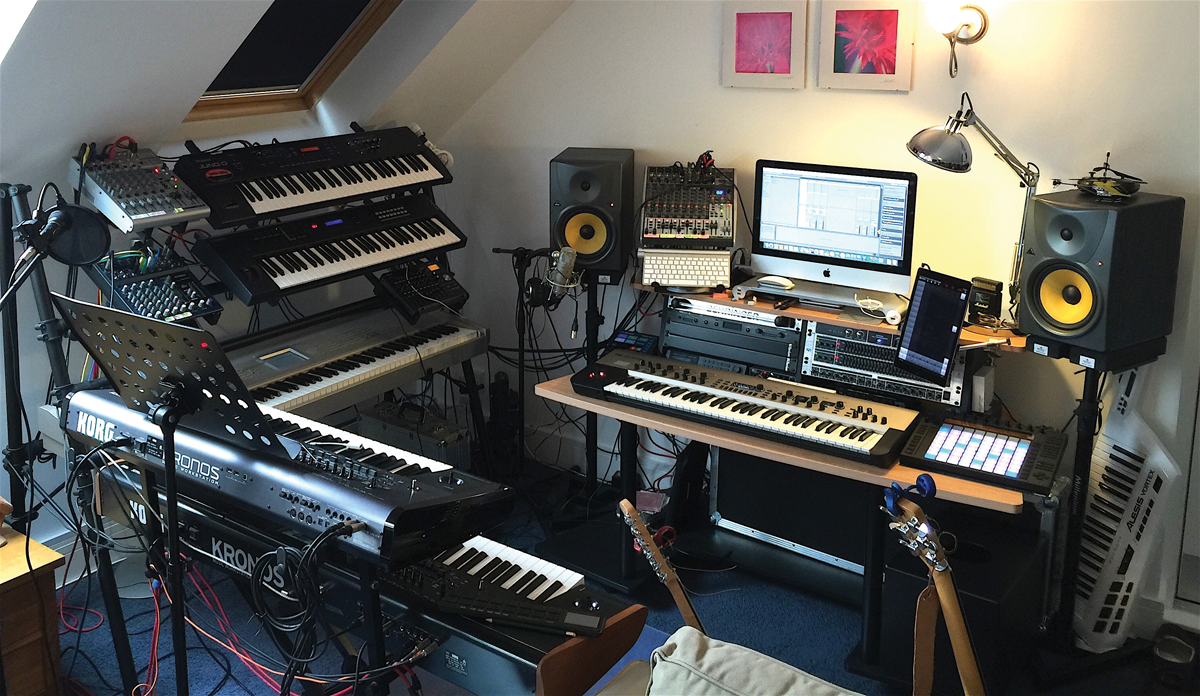 Which DAW?
I use Logic Pro X and Ableton Live as well as the built-in Kronos sequencer, which I really like.

Favourite gear?
The Kronos 2 88 – it doesn’t matter what style you want to do, everything is in this synth.

How do you use your setup?
Just for fun, rehearsing with my band and also with a singer, but most of the time on my own, composing and recording. 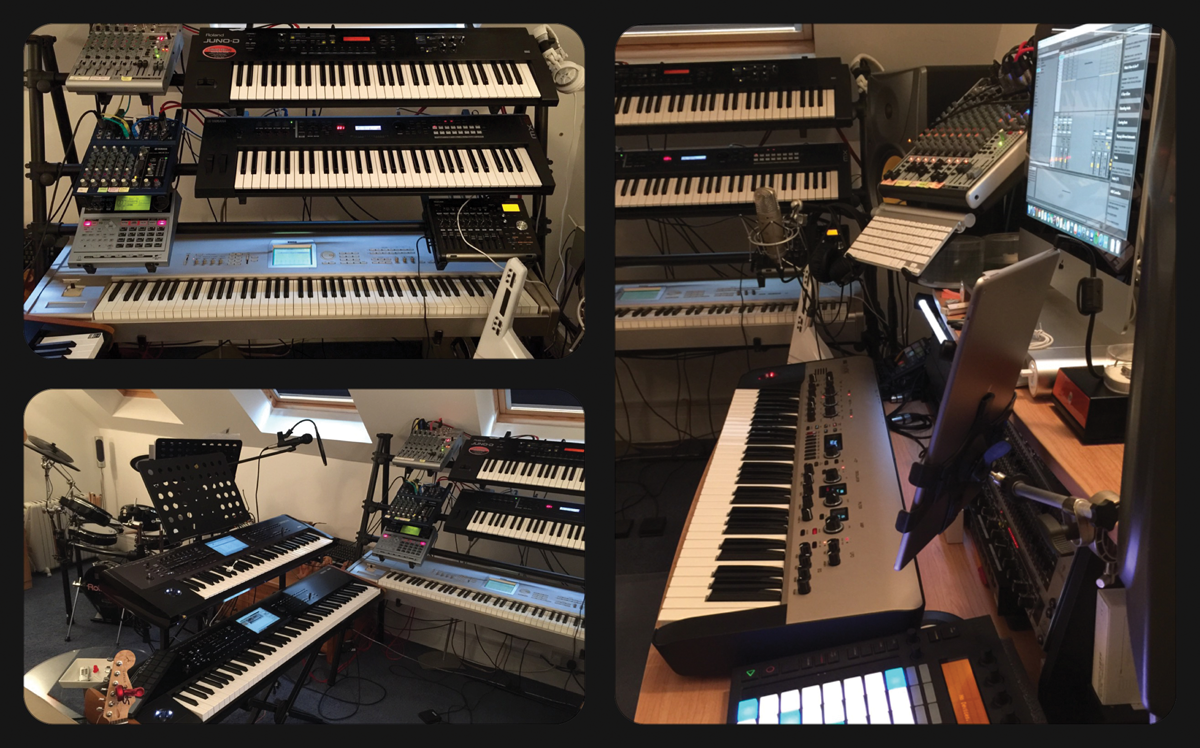 Next on your studio shopping list?
A Yamaha Montage 8 – good for electronic music and some exciting new features.

Dream gear?
The ROLI Seaboard Grand as it brings a complete, new dimension to playing. It is still a little expensive.

Any advice?
Get yourself a good music workstation. I started with a Triton about 17 years ago and still use it. Cost-wise, it is the best thing to do.

Any studio stories or anecdotes?
Not really, but I have had lots of fantastic nights playing, singing and drinking with mates, not bad memories in my studio!

Which DAW do you use and why?
Logic Pro – great for third-party instruments/effects, workflow, editing and setting up your own preferences. I use Ableton once in a while, but 99 per cent of the time, it’s Logic.

Favourite gear?
Mackie Controllers. It’s great to be able to go between the mouse and the faders/knobs on them for automation/settings and the transport functions.  It works very well with Logic and integrates with the mixer and plug-ins.

How often do you use your studio?
I work daily in my studio. Lately, it has been non-stop… but I try to take a day off every once in while.

How do you use your setup?
Working professionally. Mostly music for TV, film and commercials. I have had music in over 300 episodes of TV shows, such as NCIS, The Mentalist and Keeping Up With The Kardashians and I’ve done music for Mercedes and DISH, etc.

Sometimes I do stuff for bands, but mostly I work on my own music. I don’t release everything I do, but I do release an album or a song every once in a while. There are around 160 tracks released under Big Swede and my other projects: Refurbished, Protecto (with Reeves Gabrels), X-World/5, 3 Of A Different Kind, Tweek Show, Prune Bros.

Next on your shopping list?
I wanna get into modular synthesis – get a few boxes and explore them.

What is your dream piece of gear?
Some kind of analogue console that integrates with my digital set up so I could use it together with all my stuff in the computer. I love working in the box and I’m mixing everything in it as well, but I would like to be able to go between analogue and digital a little more.

Do you have any advice for MusicTech readers who are just starting out on their studio journey?
You don’t need a lot of gear to get going and you don’t need to know everything, either. Just start doing it and learn by doing. Gear is great, but it is also about what you do with it! Write a song and record it! And then on to the next one!

Do you have any studio stories or anecdotes?
One of my restrooms, which includes a shower area, has a really nice room ambience. I‘ve used it to record my good friend and favourite guitar player Reeves Gabrels (The Cure, David Bowie) in there, playing a 10-string South American guitar called the Charango. 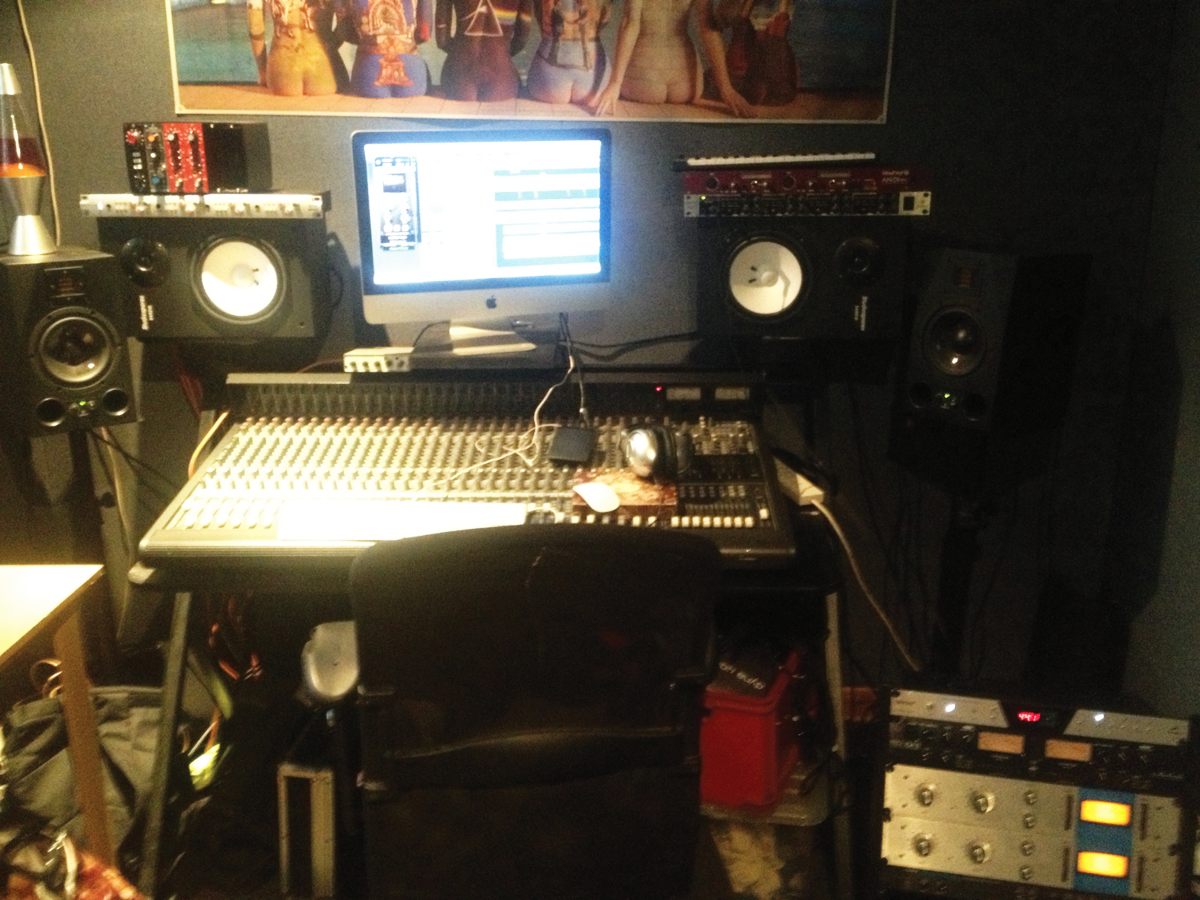 Key components?
SSL preamps (four of them); 1176 compressors; and my ability to understand what people want and turn it into music!

Which DAW?
Logic, mainly, as it’s quite common in London. I’m more than happy to use Cubase, too, but I seem to be in a minority here. I can also work on Pro Tools, if needed.

Favourite gear?
1176 compressors. They make every signal from any preamp sound perfect.

How do you use your studio?
Mainly for production work with artists and bands. When I get some downtime, I compose music for production-music libraries and publishers I work with.

Next on your shopping list?
Some interesting 500 Series modules, because I made that silly mistake of buying the 500 Series chassis and now I have five more slots to fill!

Dream gear?
A Neve desk – then your search for the perfect preamp is over. I’d settle for a Trident A-Range, too…

Any advice?
Get a new sound, work with new genres and with new people and keep on evolving.