Show off your Studio – Part Seventeen

An unusual episode of SOYS this month as we run a promised interview with Bert RAM complete with studio time travel! Send us a picture of your studio via the MusicTech Facebook page and we’ll get in touch… Bert Ram Interviewee: Bertram Ernst Contact: via www.roman-artist.com We originally ran a feature on Bert Ram a […] 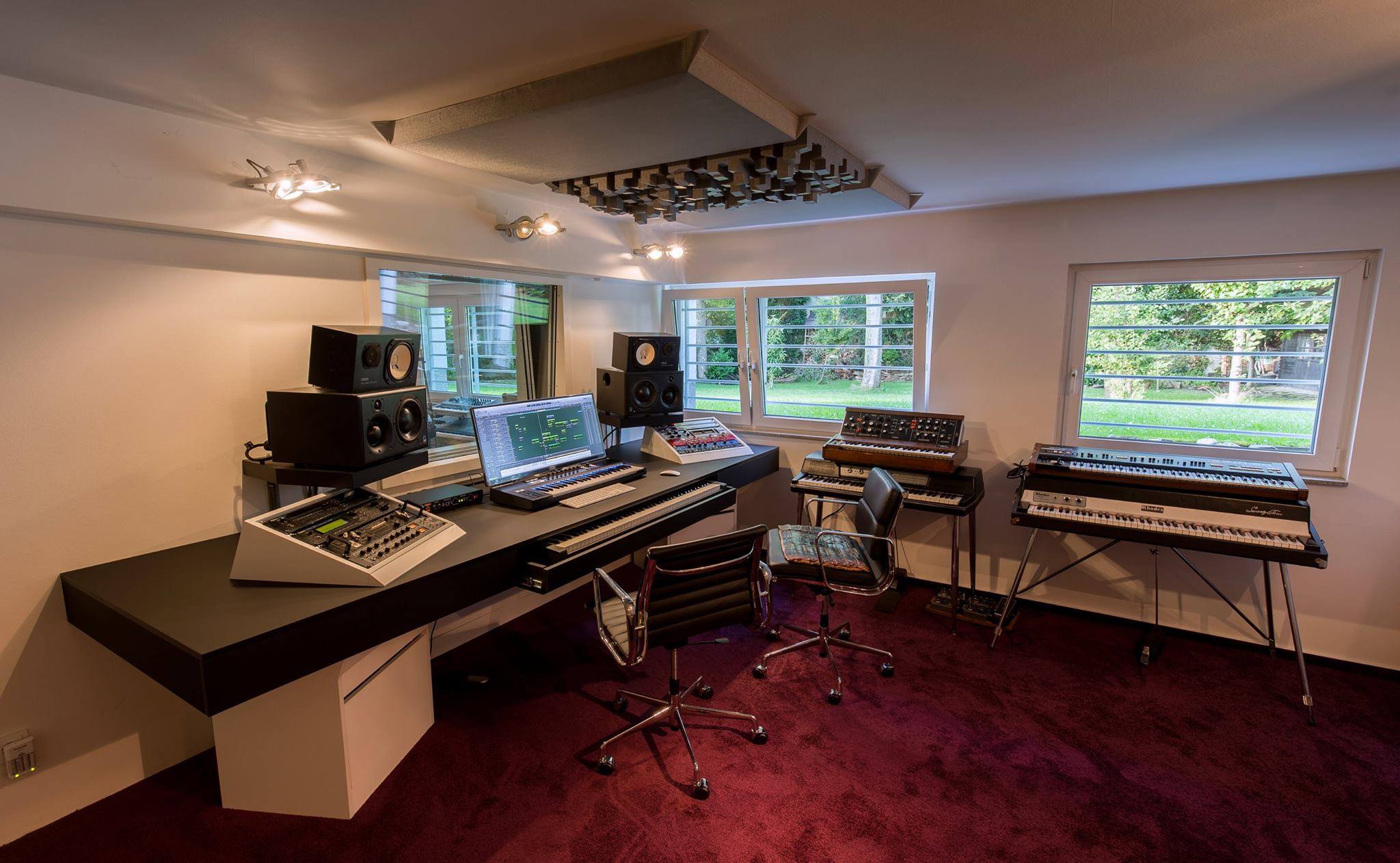 An unusual episode of SOYS this month as we run a promised interview with Bert RAM complete with studio time travel! Send us a picture of your studio via the MusicTech Facebook page and we’ll get in touch… 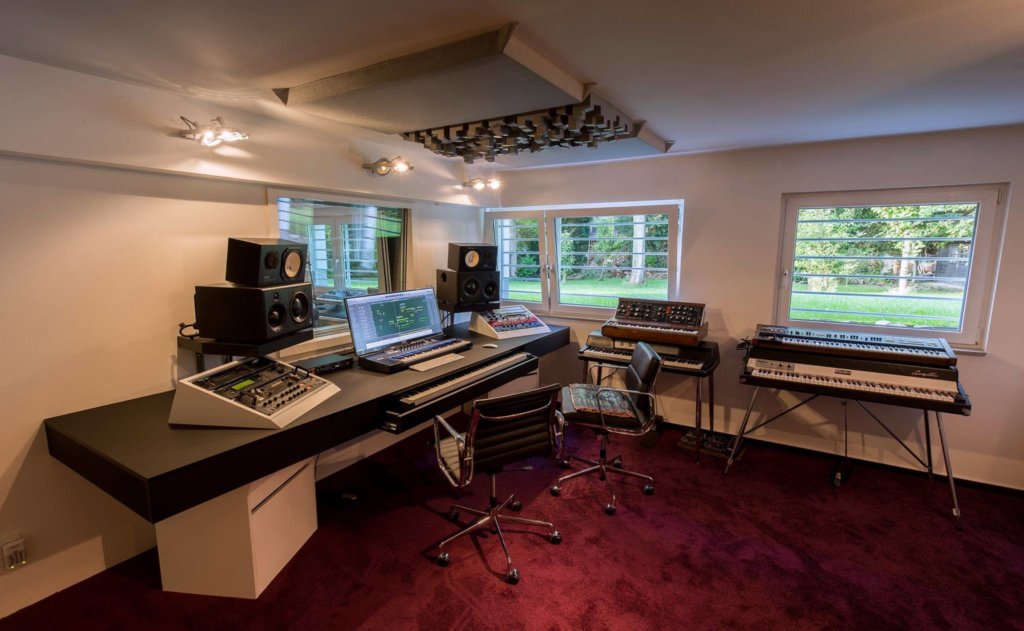 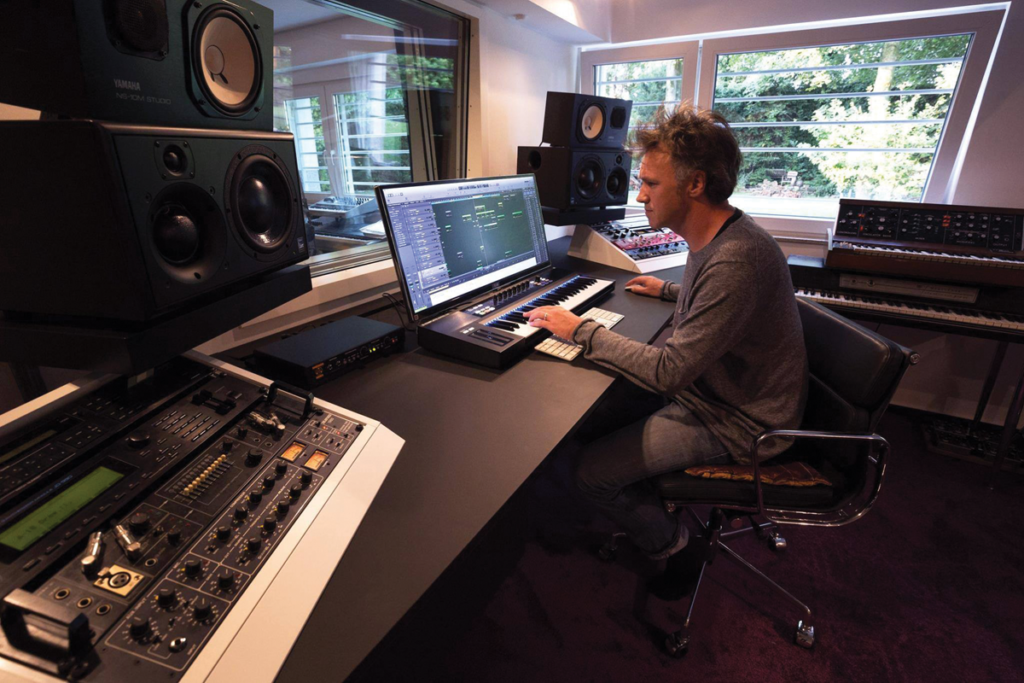 We originally ran a feature on Bert Ram a few months ago, as we were fascinated by his studio shots from the 80s, 90s and present day – it’s rare to see a set-up develop like this.

They show a three-decade younger Bert within his 80s set-up – classic for the time and comprising tape, analogue and classic 80s synths from Yamaha and Roland.

The much more up to date shots of Bert’s studio are a sleeker and cooler affair, with Bert seemingly not having aged nearly as much as his gear. So what have the intervening years meant for Bert, how did his gear develop and, more importantly, is the studio located in the same place (it certainly could be judging on what is out of the window in each shot)? All the answers and more follow because, as promised, here is the full interview…

MT: Tell us the key components of your studio

Bert Ram: In 1989 I got my first record contract with Warner Germany. My artist name at the time was Roman (roman-artist.com). The first album was recorded in Hamburg. I used a Prophet 2002, DX7, Juno 60, D-50, a Tascam 8-track recorder, accordions, an AKG C414 and Shure SM58 mics. Not much equipment, but enough to realise my concept. I was really interested in sampling and this approach was a good development. 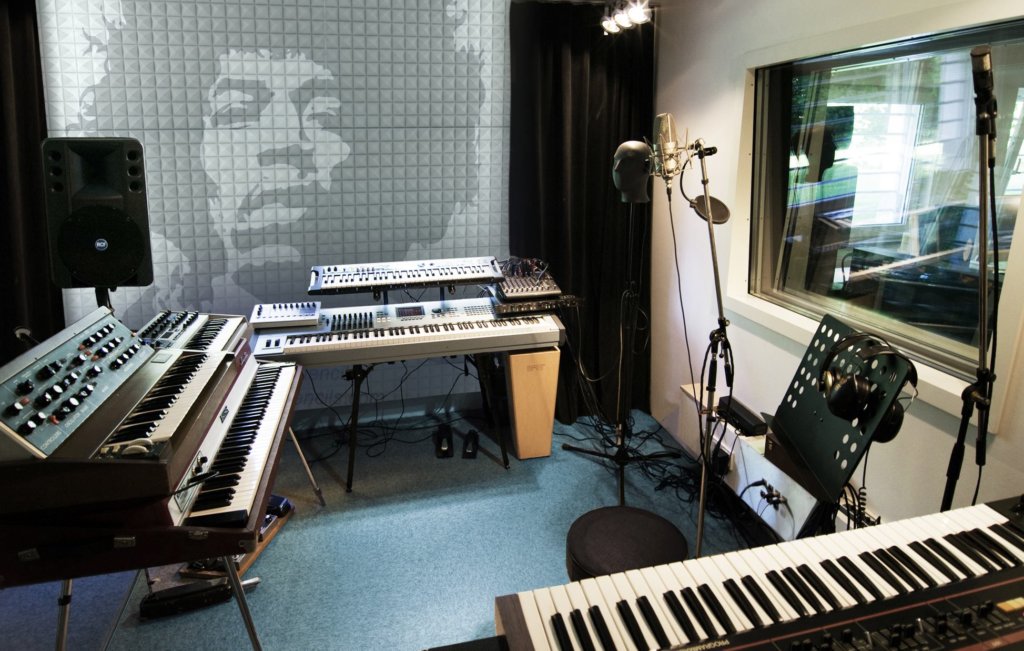 In 2008 I had a Neve console 5088, serial number 3 – a great sound and warm character. But I missed recall after years using different Macs, so I sold the console in 2015 and now I am an ‘in the box’ producer and it feels perfect.

I have a Mac computer (3.5 GHz 6-Core) and Logic X as my DAW. Today, I love plug-ins but I have not forgotten to experiment with my Urei 1178, some Neve, Focusrite and API preamps and compressors and – of course – my old analogue instruments, like my Fender Rhodes, the Wurlitzer, the Minimoog or even my Crumar DS-2. More than ever, I am also interested in a perfect studio acoustic.

Looking at the shots, taken three decades apart, they could be (just) in the same building, or at least with the same garden… I started my music career at the beginning of the 80s.

Right at the start of it, my aim was to work in my own studio. Later, this vision became true. In the 80s [as in the picture below] my work place was good for demos. I changed the building in 2000, but both of them have windows. This is important for me: fresh air, daylight… 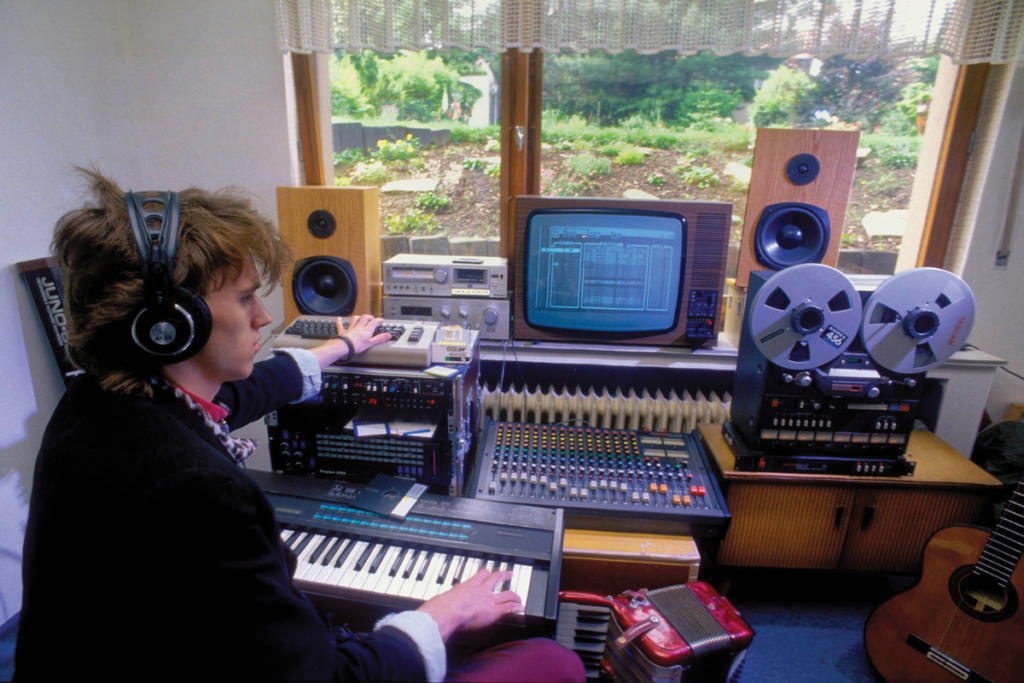 Which DAW do you use and why?
I work with Logic X (and Apogee/ Symphony). I’ve used it since Notator/Emagic, and I am sure that Apple always fix bugs as quick as possible. There are certain things in X that feel unnecessary (for me) and it feels like a tribute to amateur producers (the automations, the chord functions, the drummer, etc).

But, all in all, I trust Logic. The bugs concerning markers, tempo, changes, automation and cycles, etc – I can live with those as you can produce music with just Logic these days. The important thing is that you know your system and its options.

Favourite gear?
Logic, as well as my analogue gear – all their mistakes, irregularities and character. Each Moog, each Rhodes sounds different. As long as you know all these things you will be inspired by each step.

I don’t worry about the difference between plugins and their originals. I just use each for specific qualities. They just have to fit to my workflow. 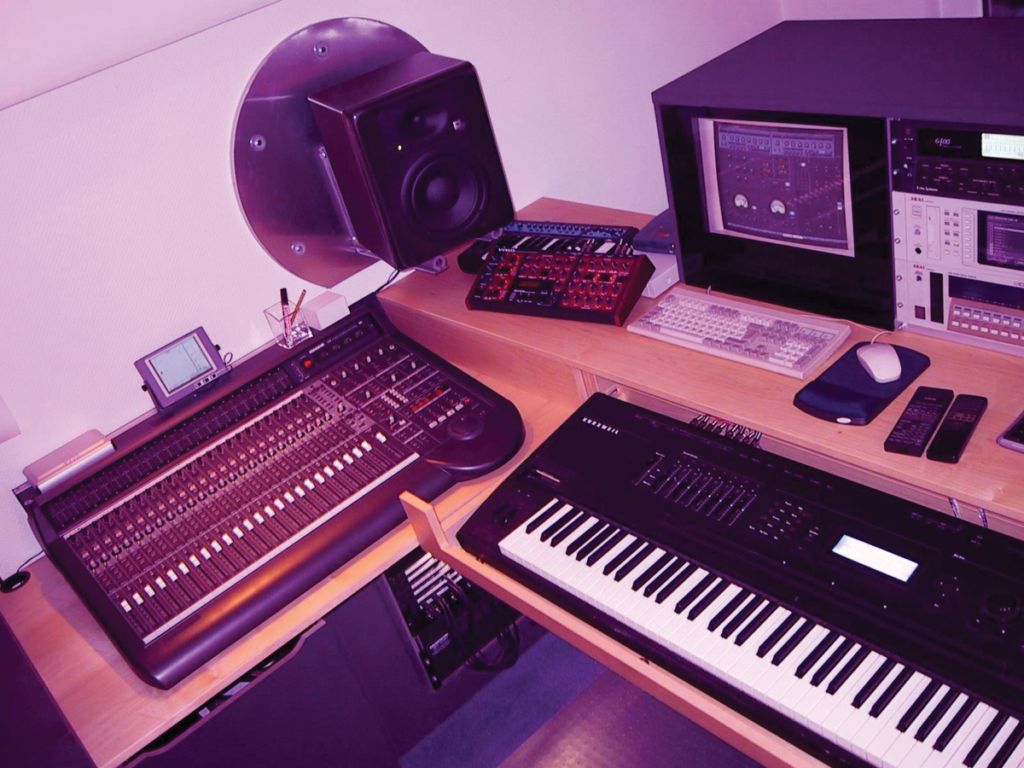 How do you use your studio?
I produce my own music, no other bands anymore. My clients are Daimler Benz, Volkswagen, Mini, BMW and more.

Does anything annoy you about your studio set-up?
Sometimes the need to learn stuff annoys me. There are so many technical things you have to know and it takes so much time to know them properly. Sometimes bugs annoy me.

Sometimes technical options annoy me, because they distract me from the real (musical) problems. High-tech is not everything. It can be just a means to express your ideas and visions. Sometimes it feels like a maze.

Then I think of my old 24-track tape machine and about just making decisions (without undo). But I am aware of time pressure and compatibility so, consequently, I have chosen to mix in the box.

Really, the only thing that annoys me is the moment when I am not clear about decisions. But, thinking about it more, also annoying is that it is hard to accept that – for instance – a master keyboard these days does not have the quality of old instruments from the 70s or 80s. My vintage instruments are still running!

What is your dream gear, either real or imaginary?
Maybe I’d like an old Neve console with just eight tracks, in good condition, with a specific flavour (just for recording). I also like the new Native Instruments Komplete Kontrol as now it is really easy to handle loads of sounds and parameters using it.

Do you have any advice for MusicTech readers?
Always do what you love and what you feel. Don’t be inspired by money. Be keen on new innovations. Play with real musicians. Find out what you can and don’t concentrate on your weaknesses. 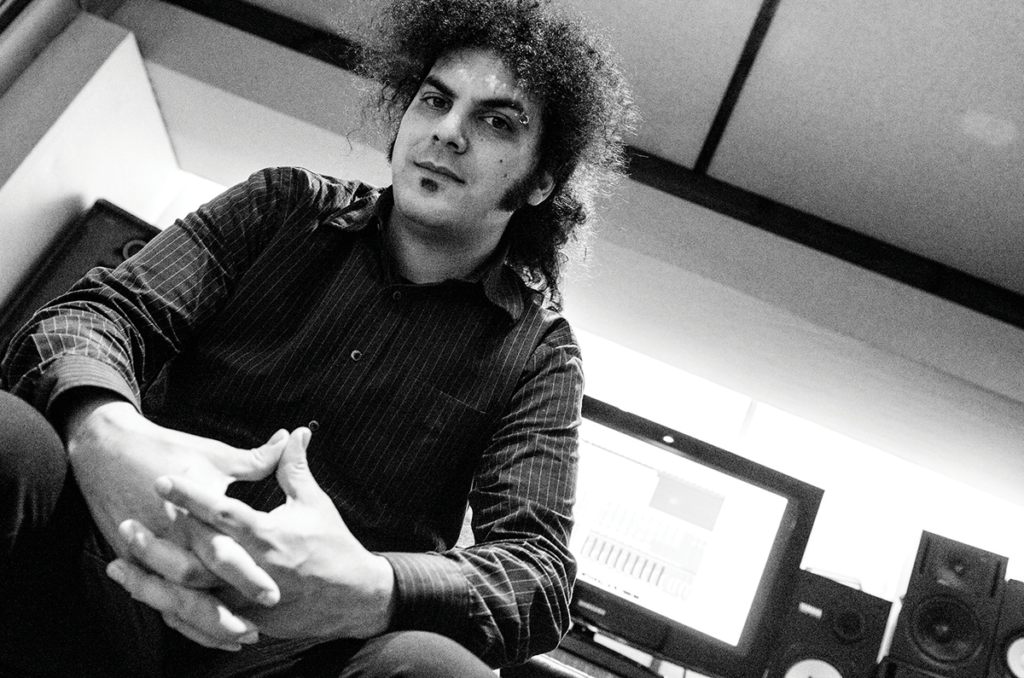 My SSL preamps (four of them), 1176 compressors, and mainly my ability to understand what people want and turn it into music!

Which DAW?
Logic, mainly, as it’s quite common in London. I’m more than happy to use Cubase, too, but I seem to be in a minority there. I can also work on Pro Tools if needed.

Favourite gear?
My 1176 compressors. They make every signal from any preamp sound perfect, if you get the right setting.

How often do you use the studio?
In the past year I’ve spent about 20 hours a week on sessions and work – that’s excluding working in other studios which are not mine (that was about another 16-20 hours weekly), and mixing, which I tend to do at home. So it gets quite busy!

How do you use your studio? Bands or solo?
Trying to combine them both, though I use it mainly for production work with artists and bands. When I get some down time I compose music for production music libraries and publishers I work with.

Does anything annoy you about your set-up?
My current set-up doesn’t allow me to keep a drum kit assembled at all times, which eats up precious studio time when bands come to record. Starting next year, this will be solved, though, as I’ll be moving to a bigger studio with a great live room that will be able to accommodate bands at all sizes!

What is next on your shopping list?
Some interesting 500 series modules, because I did that silly mistake of buying the 500 series chasis and I have five more slots to fill!

Dream piece of gear?
A Neve desk because then your search for the perfect preamp is over. I would settle for a Trident A-Range

Do you have any advice to anyone starting out on a studio build?
Not to worry about gear too much. Get a good interface, get comfortable with the DAW you’re working with and try different things every day. Get a new sound, work with new genres, new people and keep on evolving.

We’ve teamed up with Meet&Jam Studio, a new service for studio owners to rent out their facilities across the UK and US. Sign up to the service at MeetAndJam.com and you will automatically be considered for inclusion in this, MusicTech’s (award-winning) Show Off Your Studio! 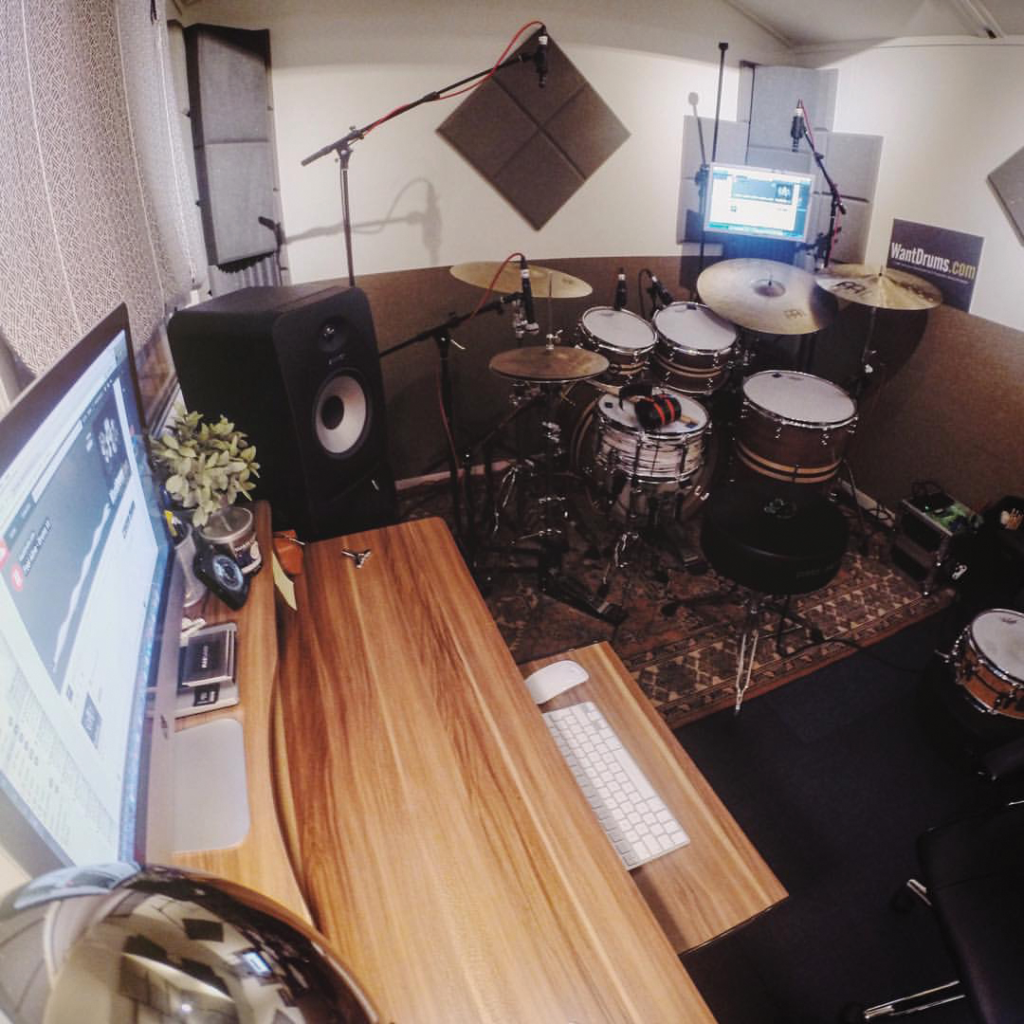 Which DAW?
Logic Pro X. Simple and easy to work with. Getting polished results quickly is essential for me.

Favourite Gear?
My snare drums! Changing a snare sound can drastically change the mood and tone.

How do you use your studio?
I work professionally, recording drum tracks for songwriters, bands and producers. They email me their recordings and I lay the drums on top, then I send them the full-quality drum stems!

Anything annoy you about your set-up?
Space. It can be tight when you’ve got people in on a session, although 99% of my clients don’t come, as it’s done via the internet.

Next on your shopping list?
Some vintage preamps. I’m a big fan of the vintage sound and to be able to deliver ‘truly authentic’ vintage drum sounds, you need the real thing!

Any advice?
It’s worth spending a little extra on things like mics so that you won’t have to replace them further down the line