Show off your Studio – Part Fourteen

So successful has this feature become that we’ve decided to give it a bit more attention with our weekly roundups and more studios features in our main monthly roundups. If you want to show off your studio – as these people have – send us a picture via the MusicTech Facebook page and we’ll get […] 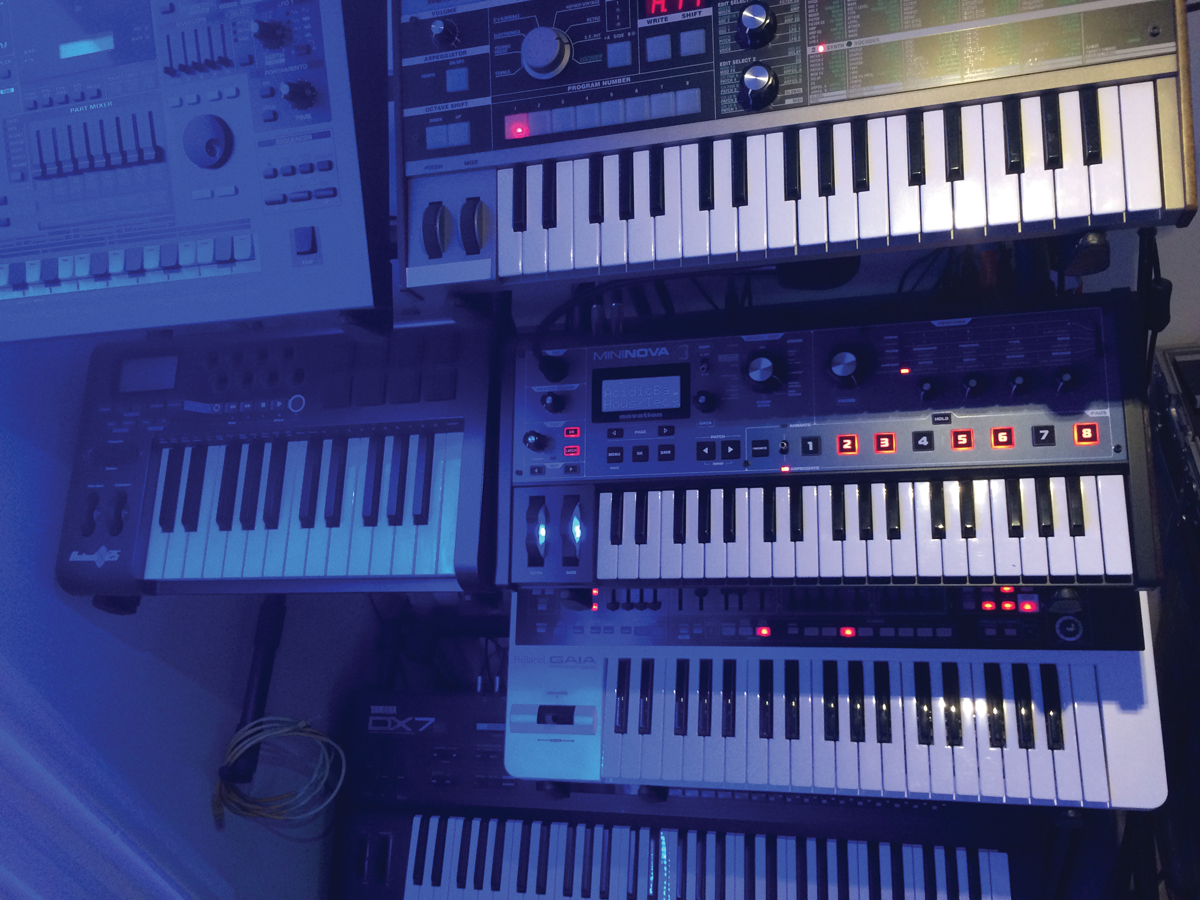 So successful has this feature become that we’ve decided to give it a bit more attention with our weekly roundups and more studios features in our main monthly roundups. If you want to show off your studio – as these people have – send us a picture via the MusicTech Facebook page and we’ll get in touch… 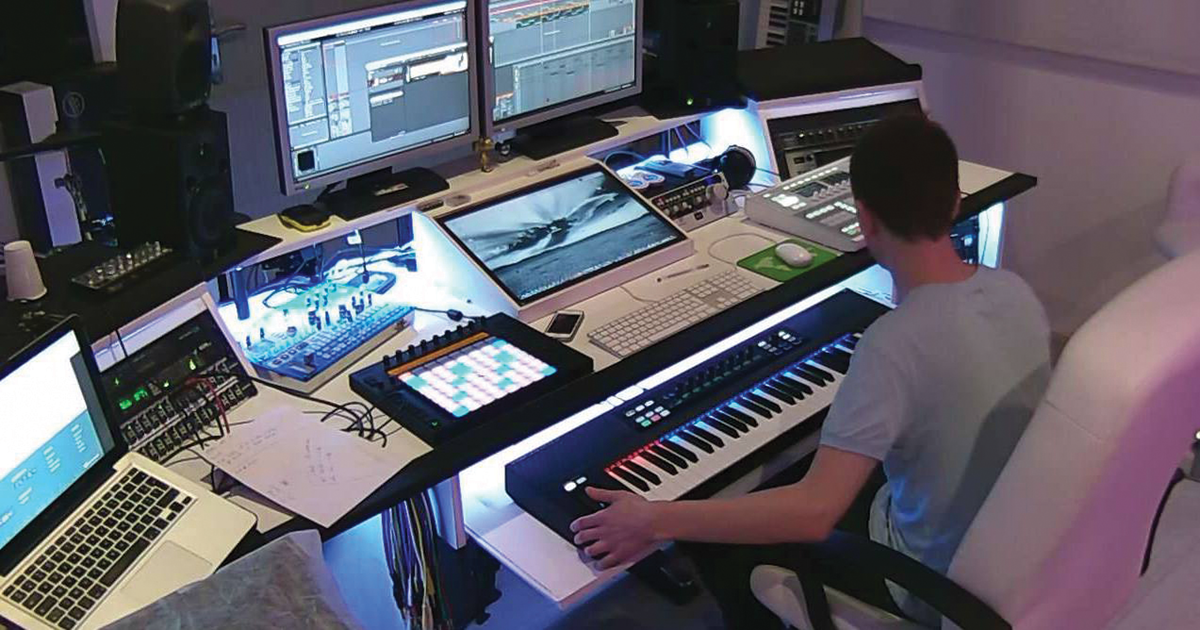 Key components? This studio is part of a more important musical complex, founded in 2008 by some members of my family. We have two recording studios.

The biggest one is dedicated to recording and mixing, and equipped with Pro Tools HDX. This is Studio B. We have rehearsal studios and a recording school, too. My studio, called studio A , runs on a Mac Pro 3.1 with a MotU 828mk3 interface, a UAD-2 QUAD, and a MotU MIDI 128 interface.

All audio from the synths goes to two Samson Patchbays for routing flexibility. I have also created some templates in my Komplete Kontrol S keyboard for better remote control. Monitoring includes a pair of Genelec 8020Bs and Yamaha MSP5s with a sub. Everything is controlled by an SPL 2381 monitor controller.

Which DAW?
For Studio A, my main DAW is Ableton Live 9. I’m very comfortable with it, and have used it since V5. I have created many presets in it to increase my workflow. I also run Pro Tools 11, and sometimes Reason. 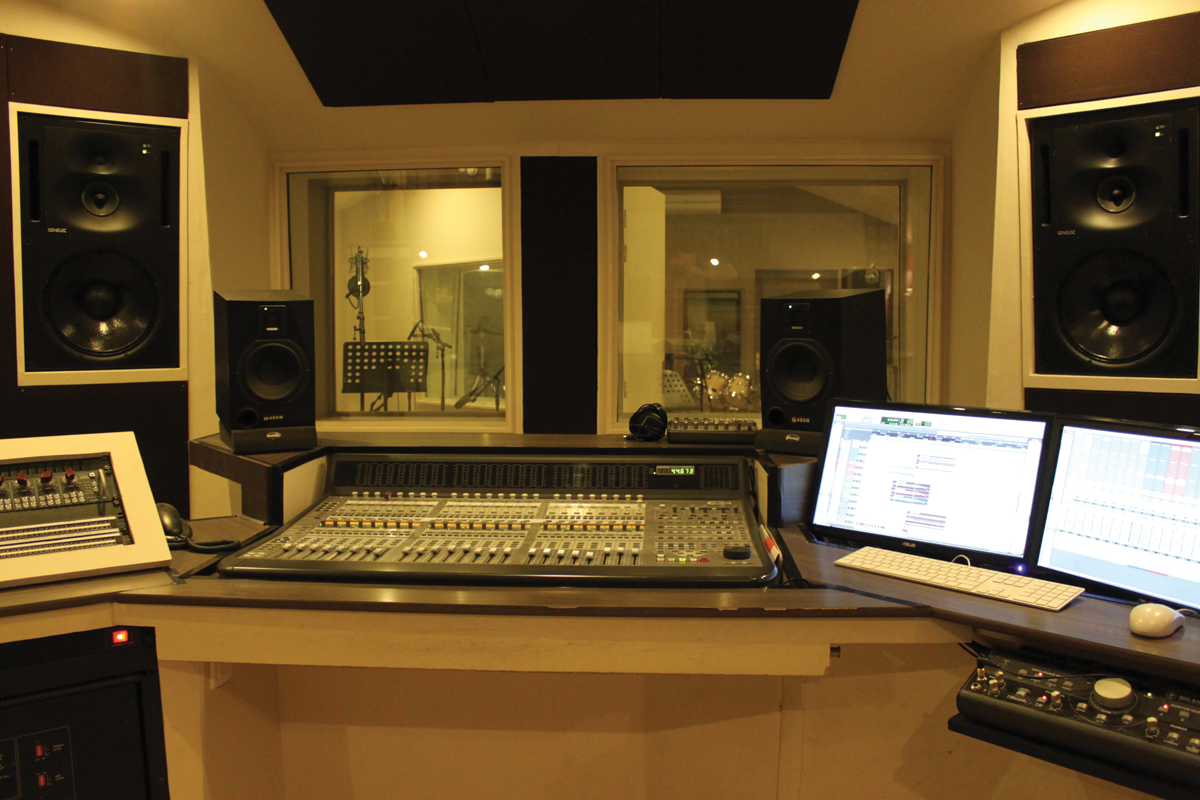 Favourite piece of gear?
I don’t really have a favourite. It’s all in the sound I’m looking for. I’m a big fan of Native Instruments products for production and sound design – I find them very inspiring and flexible.

I also like Serum from Xfer, and Spire. For hardware gear, I really like my hardware synths – microKorg, Mininova, EMX-1 with Mesa tubes, SH-01 (a little less) and my Integra-7, in which there is a lot of Roland sound history.

Does anything annoy you about your set-up?
Actually, I’m a little bit annoyed by my current soundcard, which will probably not be a part of my future set-up.

How do you use the studio?
I use Studio A to compose for me or for other artists, and also to create new sounds, which I really like to do.

What is on your gear shopping list?
A modular synth (Eurorack) to increase my sound design and fun. Also, maybe a new Mac Pro with an Apollo 8 Quad.

Dream gear?
So, if we’re really speaking of a dream piece of gear, then it will definitely be a big, big Modcan B-Series modular set-up.

Any advice?
My main piece of advice would be… “Don’t do it!” Just kidding! Really, you need to treat the acoustics of your room the best you can and anticipate your monitoring placement and your listening point if you build the room yourself. 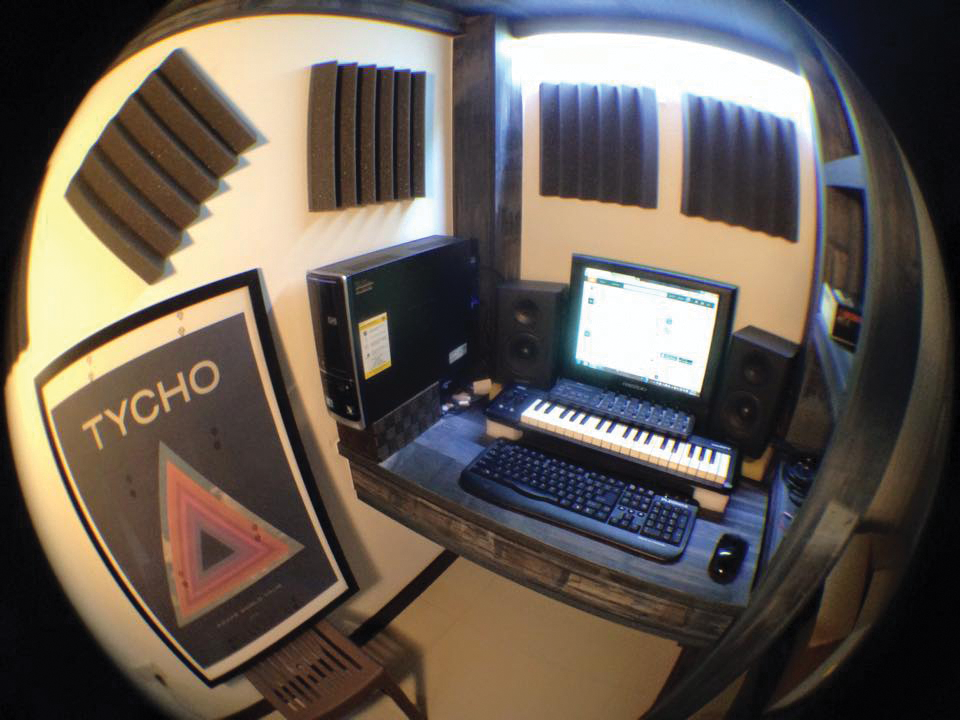 Which DAW?
Ableton Live, as it is honestly the easiest, most straight-forward and specifically fun DAW to use for both music production and playing live. The whole interface basically triggers the creative juices in your head to get something going and produce something good.

Favourite piece of gear?
The microKorg is one of the best pieces of gear to learn about synthesisers and tweaking sounds, exploring the various components on how to get a particular synth sound.

How do you use the studio?
Just for fun, really. I am currently working on personal projects and remixing. I’m producing original music just to put my ideas out there and let people listen to it (on SoundCloud). However, I sometimes get paid to create jingles, short music for online adverts, as well as composing music for short films, which I absolutely love to do.

Next buy?
I am pretty much content with what I have, but would love to get a Roland TB-303. Nothing like getting a good acid sound!

Anything annoy you?
It is much smaller than previous set-ups.

What is your dream piece of studio kit?
An Akai APC40 mkII. It means I am serious about performing my music live on Ableton Live!

Advice?
Give your room/space some good acoustic treatment. 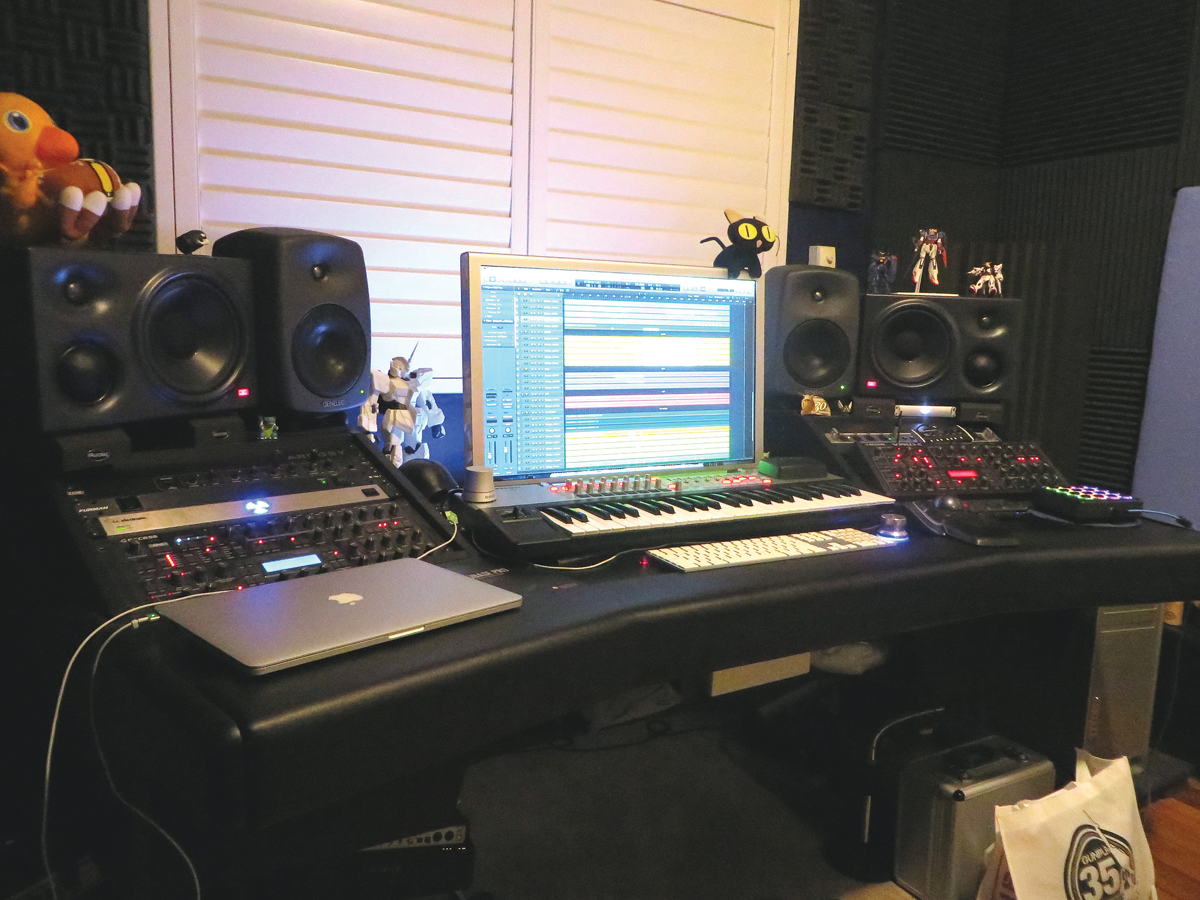 Which DAW?
Cubase 8, Pro Tools 10, Ableton 8, Bitwig and Logic 9/X. My main DAW is Logic. When I was learning, my production mentor showed me a few DAWs. I just gelled with Logic – the stuff that it came with was very usable, and ESX24 was much simpler to use than Kontakt.

There have been countless times where I have been working in other DAWs for clients and have wished I have had a certain Logic plug-in at my disposal. And with the update and addition of Camel plugins it is just getting better.

Favourite piece of gear?
My 8240s with GLM2. I had gone through a wide range of monitors to find something that would suit my room and my ear. I happened to stumble across these, which were quite rare in Australia.

As soon as I tried the GLM software, I was amazed at the difference it made and pretty much moved the whole studio around and reapplied room treatment. The readings I got taught me a lot about my work space.

How do you use the studio?
I use my studio as a ‘professional’ work place. I use that word loosely, as it is quite common to see me eating a pack of lollies and playing my DS instead of listening to a mix for the hundredth time…

Does anything annoy you about your set-up?
Turning things on in a certain order. If I don’t do it before I open up any DAW, my computer will crash – which is fair enough, I guess.

What is next on your shopping list?
NI Komplete Kontrol. It looks like a very cool piece of kit, both aesthetically and feature-wise. I am hoping it could speed up my writing workflow and help stop my occasional writer’s block. The cool chord mode and NI version of Automap would be very useful.

Dream piece of gear?
For a long time, it was the K&H O300 because they were very uncommon in Australia. When I listened to them in UK they set the standard for me as to what a good monitor should sound like.

Now I guess my dream piece of gear would be something that does not exist yet: a Virus TI3 with a USB3 or Thunderbolt port.

Advice?
Get a pro to treat your room and be willing to spend the money – it makes other purchases easier. Also, when buying kit, you get what you pay for. Finally, invest in yourself, because no one else will. 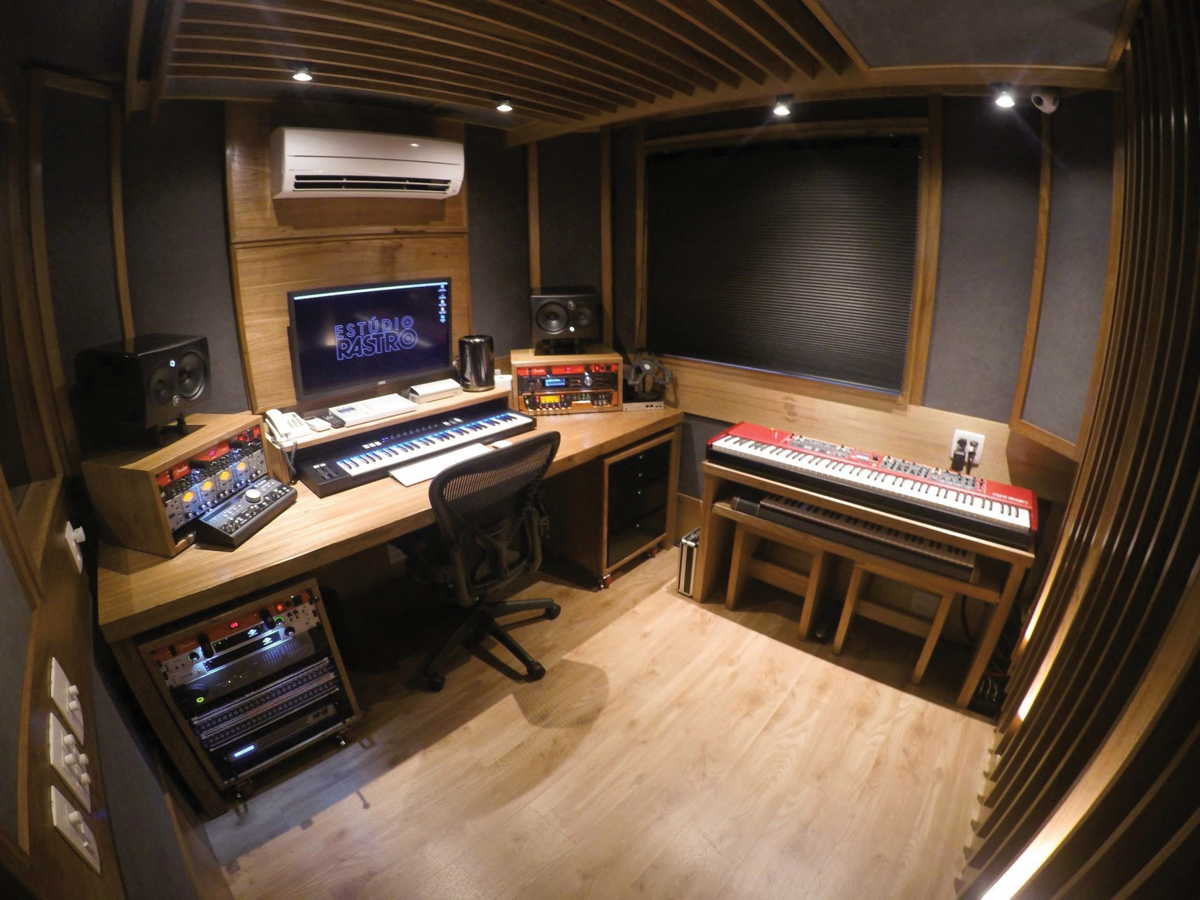 Which DAW?
For composition and scoring Logic X and Ableton Live. For recording, mixing and mastering, Pro Tools 12 with the HDX hardware.

Favourite gear?
Genelec 8351a speakers – super-clear and transparent. All engineers who come in the studio love the sound.

How do you use the studio?
We work professionally, making music, voiceovers, producing other artists and recording many projects.

Does anything annoy you about your set-up?
We had stationary frequencies. When we worked with the new Genelecs, the problems went because of the GLM calibration [two in one issue, wow! – Ed]

Next buy?
We love analogue stuff, so maybe we will buy a Moog Voyager.

Dream piece of kit?
An SSL console and a big main monitor system. Maybe that is some years off!

Advice?
Build your project in your head first. Think about all of the equipment you will need, the connections and how they will co-exist. And study a lot: the equipment, the techniques – all you can learn to master your environment, projects and gear