It started out as commercial recording studio, but has ended up as one of the world’s leading music-production educators. MusicTech catches up with industry and education gurus, Point Blank… Point Blank is the only UK school with a 48-channel SSL Duality Delta SuperAnalogue console Point Blank Electronic Music school has been going strong for well […] 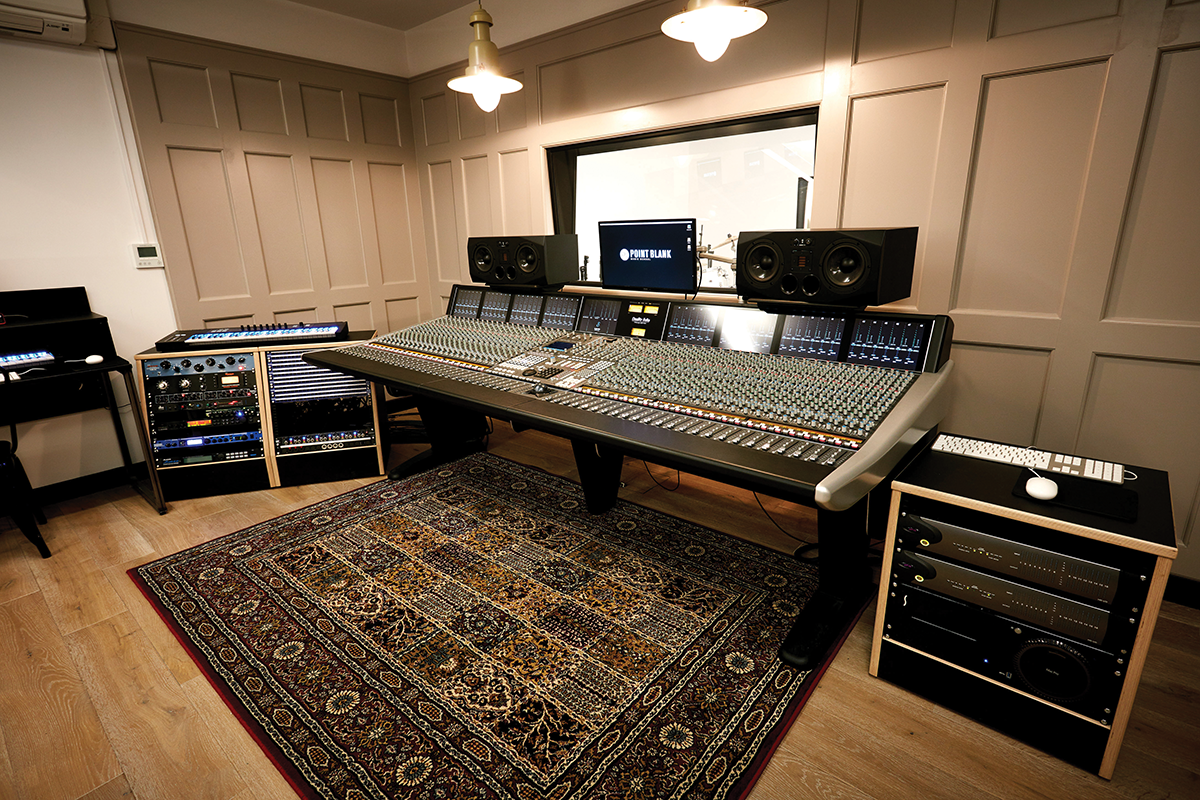 It started out as commercial recording studio, but has ended up as one of the world’s leading music-production educators. MusicTech catches up with industry and education gurus, Point Blank… 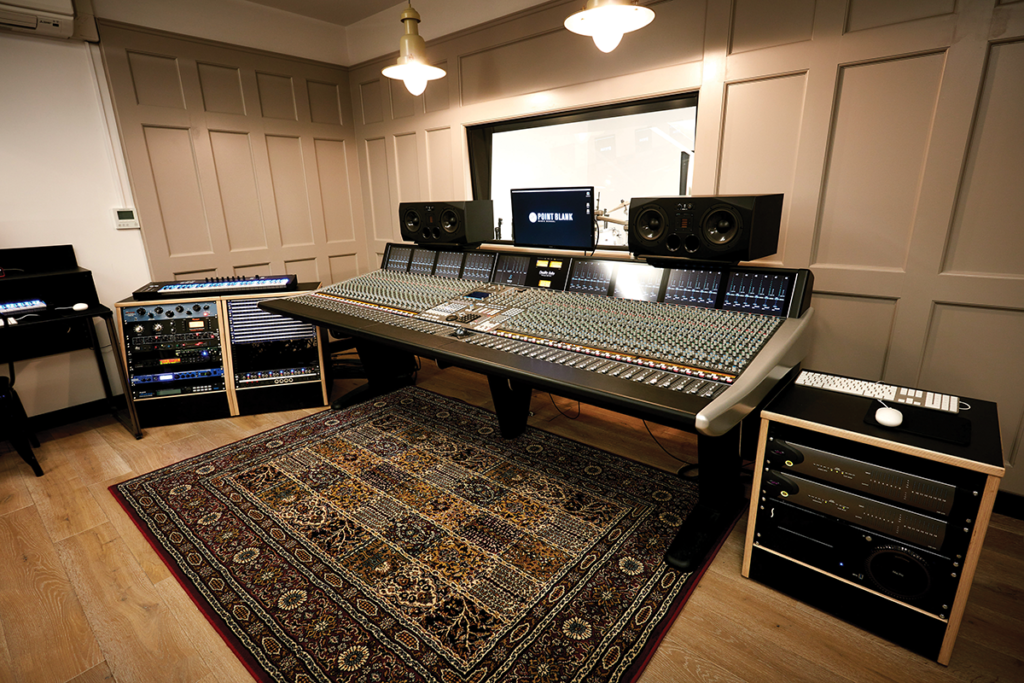 Point Blank Electronic Music school has been going strong for well over two decades and now has two campuses in London, plus one in Los Angeles. Whereas the school at one point focused on music production, you can now learn about just about anything music-related, with courses for singing and songwriting, working in radio, DJing, live sound and the music industry now available across the main campuses and to study online.

Music production remains a huge focus, though – and as you can see from these photos, the school’s studio facilities allow students to work in a top-notch production environment. Some of the school’s courses even focus on producing specific genres of music, or on studio hardware and software like Ableton Live and Native Instruments Maschine, and students can release their results on Point Blank’s record label – for access to an online audience of 1.5 million and possible sync deals with the likes of Universal, Defected and Tool Room. MusicTech caught up with Point Blank MD Jules Brookes to talk tech education…

MusicTech: Tell us about the early days of Point Blank…

Jules Brookes: It started out as a commercial recording studio, when CEO/Founder Rob Cowan opened up for business in 1994 in Greenwich, next to the river Thames. Apart from signed acts like D:Ream recording there, clubbing types would often come in to do a track over a weekend and use the Akai samplers, Atari with Notator, Mackie desk and all of that good stuff.

People soon started asking how the gear worked and from there, a course was fashioned – people really enjoyed learning how to use the gear for themselves. Before very long, there was more business in these weekend crash courses than in the traditional sessions.

Recording studios were a dying breed, after all, as this was the advent of DIY music production. A similar DJ course soon followed and the stage had been set for what we now have at Point Blank today: everything up to a BA (Hons) Music Production & Sound Engineering degree, validated by Middlesex University.

My history with Point Blank goes back to when Rob and I were 10-year-old kids listening to the Stranglers and having fights with each other. I guess some things have changed a little, some not so much!

Years later, in the 90s, Rob was setting the company up and I was touring in a band called Raw Stylus. We were signed to Geffen and had a No 1 Billboard dance hit in the US: Believe In Me. Rob and I were doing music together and released a few tunes into the bubbling white-label scene in London at the time – great fun.

I started helping out with Point Blank and suggested Rob get a dedicated Course Advisor to help explain what the courses entailed to interested punters, rather than relying on the receptionist. Soon after, I got a call in Ibiza with Rob saying, “You know that job – how about you do it?”

To cut a long story short, things worked out very well for the company – Rob and I are a great team – and I became the Managing Director shortly afterwards. I advise on strategy and head up admissions, web development, HR and other areas. And here I am, 15 years later. It’s a full and challenging role. 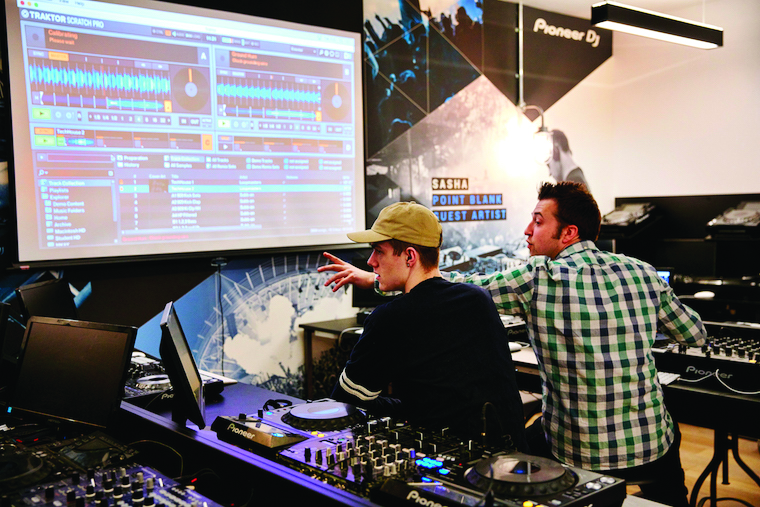 Point Blank has led the way in teaching DJ skills

MT: And the school has certainly moved on since those early years…

JB: Yes, I think we’ve definitely surpassed the original goal, which was to get a successful team together and have a vibrant school with lots of students learning how to make fantastic tunes. There was a gap for learning how to use the emerging technologies that made homemade music production possible.

That’s where Point Blank came in. We are doing things now, like having a BA (Hons) in Music Production, which didn’t happen until later on. We’re getting things done! This is a niche in which we are the market leaders – the competition now look to us for innovation and direction.

MT: Where do you think Point Blank scores over other courses?

JB: We’ve always made sure that any accreditation we use fits in to our courses rather than the other way round, where you end up losing the essence of what you teach. The academic side should fit right into the course without getting in the way of making brilliant tunes. That’s our modus operandi.

Our instructors were originally all mates from the industry who had hit records, people from bands, producers, musicians – people like Rob and me. We still have that network in place, but have added many more gifted people who impart the hands-on, practical style of teaching that we’re known for.

The proof is in the pudding, though, and at the end of the day, no one will care who the teacher is – it’s what becomes of the students that counts. Our students include Claude VonStroke, Goldie, Patrick Topping, Aluna Francis (AlunaGeorge), Nicole Moudaber, Juan Maclean, Jon Rundell, Madame X, Monki, Dev, MistaJam, and many more success stories. Above all else, I think it’s this level of success that attracts more students to the school on an annual basis.

MT: And probably the gear…

JB: Yes, I wouldn’t underestimate having the best facilities available, either! We teach on 48-channel SSL Duality Delta, Pro Tools HD, we are sponsored by Pioneer and we’ve got great relationships with the key manufacturers who make the kit we recommend for making great music.

We have a brand-new building we’ve just opened with all this state-of-the-art kit and it features a common area, ‘The Hub’, designed for meeting other students and collaborating across courses: singers with producers with managers with radio pluggers, etc. It’s a hotbed and no other school has anything quite like it. Unlimited free practice time doesn’t hurt either, with facilities like these. I could go on, but these are the main elements which have led to students preferring us over other schools. 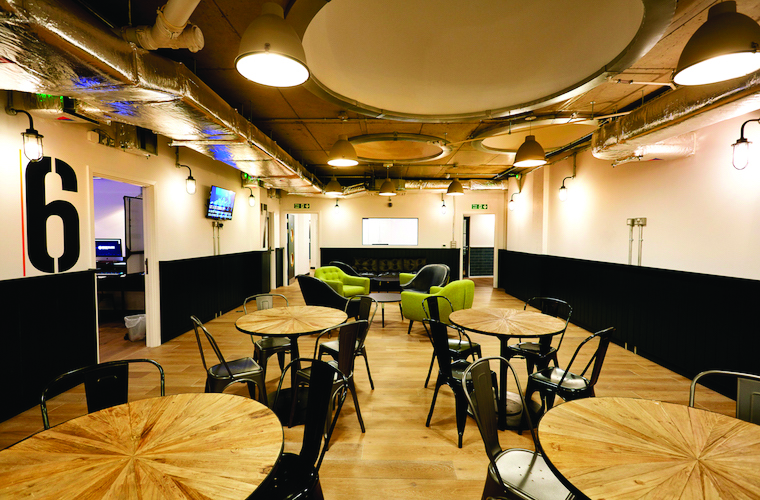 MT: Which have been your most successful courses and why do you think that is so?

JB: Well, our core is Music Production and those courses have been the most successful for us over the years. I noticed that students prefer having more practical lecture days, so we’ve made them more and more intense over the years.

Right now, the most successful course is the BA (Hons) Music Production & Sound Engineering degree. Everyone is enrolling on that, more than any other course. We’re nearly full for September already!

MT: What do students want from a music-production education these days and how has this changed over your time in the business?

JB: In terms of being a student, it’s better value to have an expert instructor on-hand four days per week (plus unlimited access to the studios for practice), with solid lesson plans and other people to collaborate with on-hand.

This will inspire success rather than at your typical course, rolling up for a two-hour lecture on a Tuesday and Thursday and dossing around for the rest of the week. It’s not like that at Point Blank, and the students appreciate the intensity. 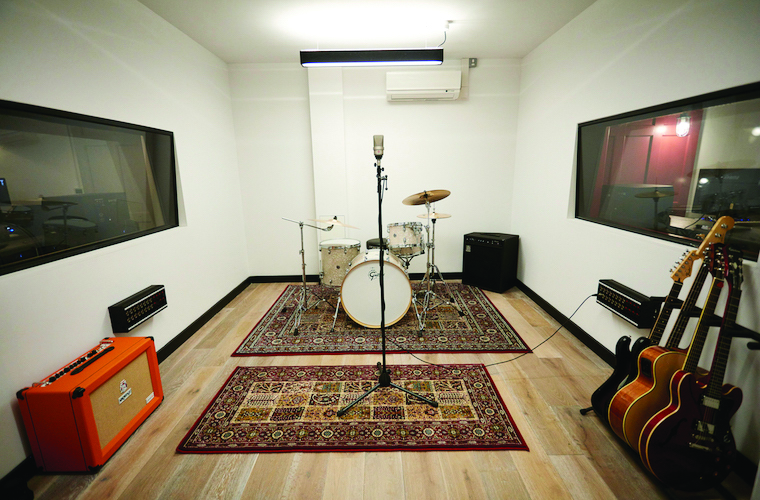 MT: You’ve touched on some of the success stories over the years, tell us about some of the more recent successful student careers, post-Point Blank?

JB: Felix Jaehn is a great example of a recent success story. Felix came to Point Blank at 17 as an amateur producer, took our one-year Diploma course and subsequently has gone on to produce some international No 1 hits, with his remix of Cheerleader and single Ain’t Nobody (Loves Me Better).

Alumni such as Leona Lewis and Izzy Bizu have also had massive success as vocal artists following their studies at Point Blank, and previous Radio graduates like Gemma Cairney, Monki, Dev and MistaJam are all enjoying strong careers in the industry.

MT: What do you think about the way music production has gone over the last decade, in terms of technology? What has been the good and the not so good, and why, in your opinion?

JB: People talk about the homogenisation of music, how everything sounds the same, how we all use the same DAWs, same sound libraries, same beats, etc. However, that’s always been the case with popular music.

So it’s nothing new to get similar-sounding tracks out there. There will always be the special music and artists that set you off: inspired, innovative, amazing and sometimes inexplicable. And of course, this is still the key ingredient, regardless of technology.

MT: What advice would you give anyone wanting to make a living from music production these days?

JB: Remember that music is about people: organic, interactive and complex. As well as mastering the techniques involved in production, you need to speak to people and have them want to work with you. They have to like you. Otherwise, your music will remain on your hard drive, an unheralded masterpiece! 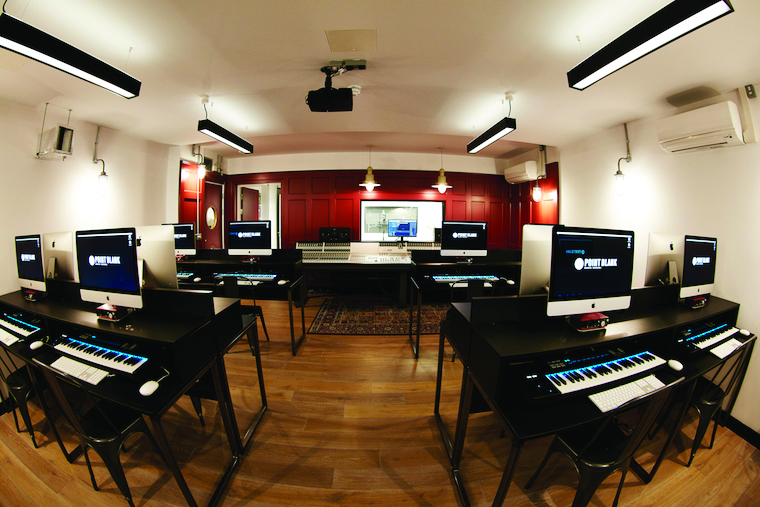 JB: I think we’ll be known as slightly maverick: doing it our own way, but doing it to extremely high standards. 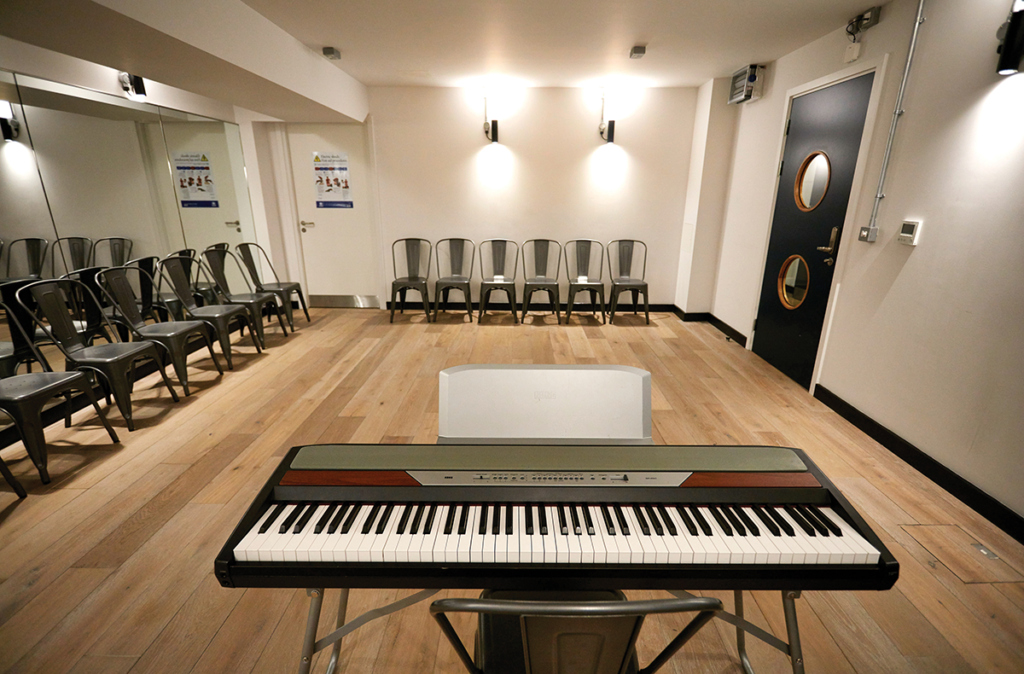 The singing studio, where alumini such as Leona Lewis and Izzy Bizu learned their trade.

MT: What is the future of music production in less than 100 words?

JB: In the future, there will be four ‘R’s: Reading/Riting/Rithmatic/Recording!

Find out more at Point Blank