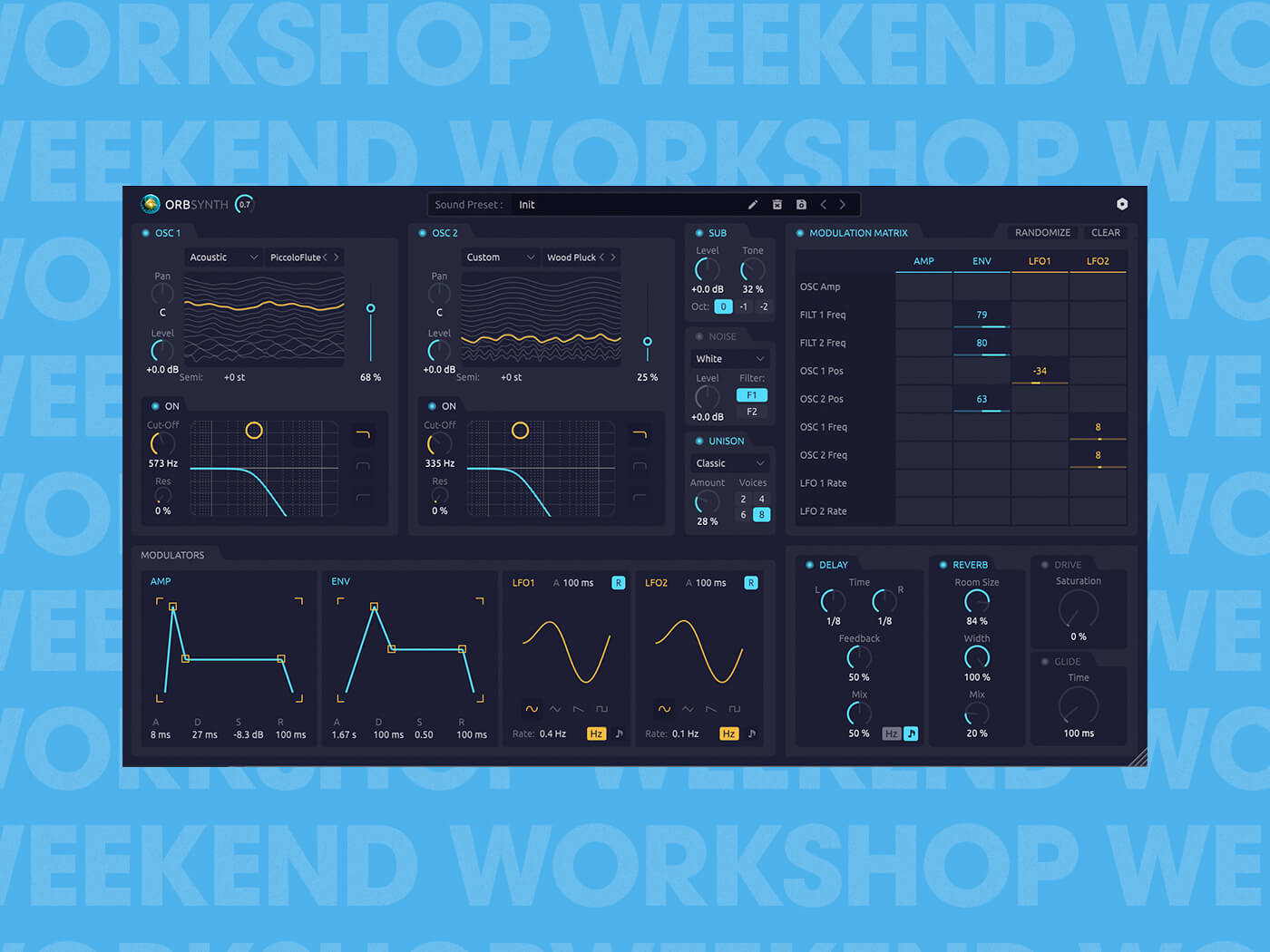 Wavetable synthesis was first developed in the late 70s by Wolfgang Palm, for use in PPG synths. It flourished in Waldorf’s hardware synths and has since become one of the most popular synthesis methods for modern sound design. And, in the world of software, Serum, Massive, and Ableton’s Wavetable are all at the forefront of this technology.

Wavetables comprise of a large number of single-cycle waveforms which you can sweep through manually or with a modulation source, such as an LFO or envelope. Interpolation prevents any clicks or pops by lining up the zero crossings of the waveforms; this allows for smooth movements throughout the table. Wavetables can be created from almost any audio source, making them incredibly versatile – capable of producing a wide variety of sounds, from PWM to semi-realistic acoustic instruments.

We usually restrict our Weekend Workshops to free plug-ins, but this time is going to be a little bit different. Hexachords, well known for MIDI plug-ins, has just released its first synth and until November 18th, it’s available for only €1. Just remember to use the discount code ‘ORBS’ when you reach the checkout, and you’ll save almost 98 per cent.

Orb Synth provides a straight forward approach to wavetable synthesis with its one-page layout and one-knob-per-function configuration. It looks a bit like a simpler version of Ableton’s Wavetable, but that’s not to say it can’t produce complex sounds. Orb Synth has four modulation sources that can be routed to nine different destinations with bi-polar depth controls. We have two wavetable oscillators with a large variety of tables, a sub oscillator, and a noise generator with two types of noise. We even have three basic effects and dozens of presets for inspiration. Orb Synth is available for both Windows and macOS in VST3 and AU formats.

Here are the sounds were going to be creating today:

This time, we are going to be designing two different sounds as an introduction to wavetable synthesis. We’ll be starting our workshop with a heavy bass sound, and then we will create some lush chords that make use of Orb Synth’s delay effect. Before we get started, let’s add an instance of Orb Synth and take a look at the interface.

Orb Synth has four main sections. Starting at the top left, we have our sound sources and filters. Here we can set various parameters for our oscillators and choose our wavetables. There are two filters with three modes of operation: high-pass, low-pass, and band-pass. You’ll also find the sub oscillator and noise generator here.

The bottom section contains our four modulators, while the top right area holds the modulation matrix. We have two LFOs and two envelopes that are freely assignable to any of the destinations in the matrix. While we can use the amp envelope for modulation, it’s also, as the name suggests, used to shape the synth’s volume envelope. Lastly, we have three basic effects with our glide control lumped in. 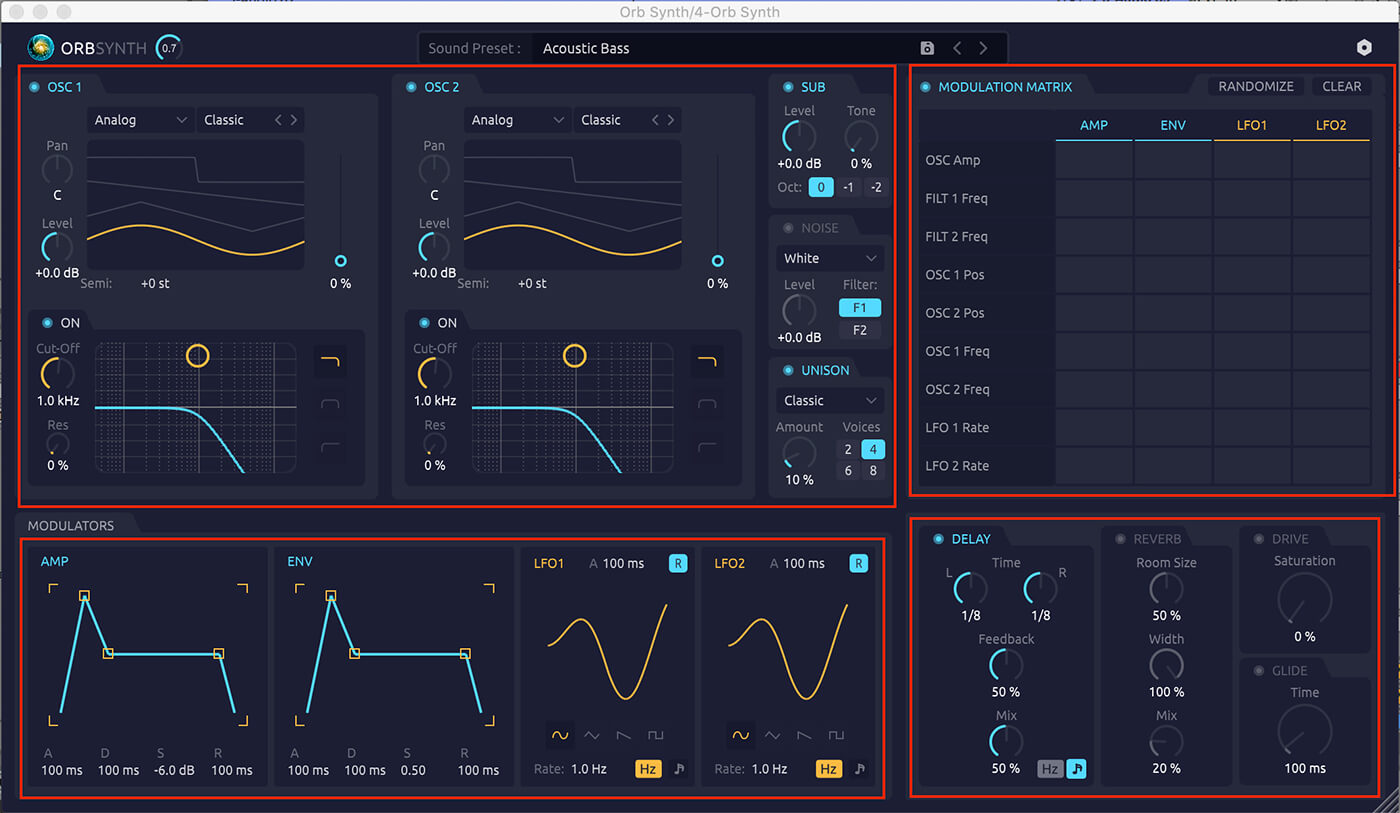 When we want to design a sound from scratch, we usually want to start from a blank slate to ensure that there is nothing strange going on in the background. Most plugins provide an initial patch to generate a basic tone and nothing else. After spending a considerable amount of time searching Orb Synth’s preset browser for such a patch, we’ve concluded that there is no way of resetting the synth to a default state. Hopefully, this is something that Hexachords can add down the road; until then, we have a workaround.

The acoustic bass patch that loads with Orb Synth doesn’t have too much going on. If we disable the sub, second oscillator, and delay, and then set the unison spread to zero, we’re left with a simple sine wave. 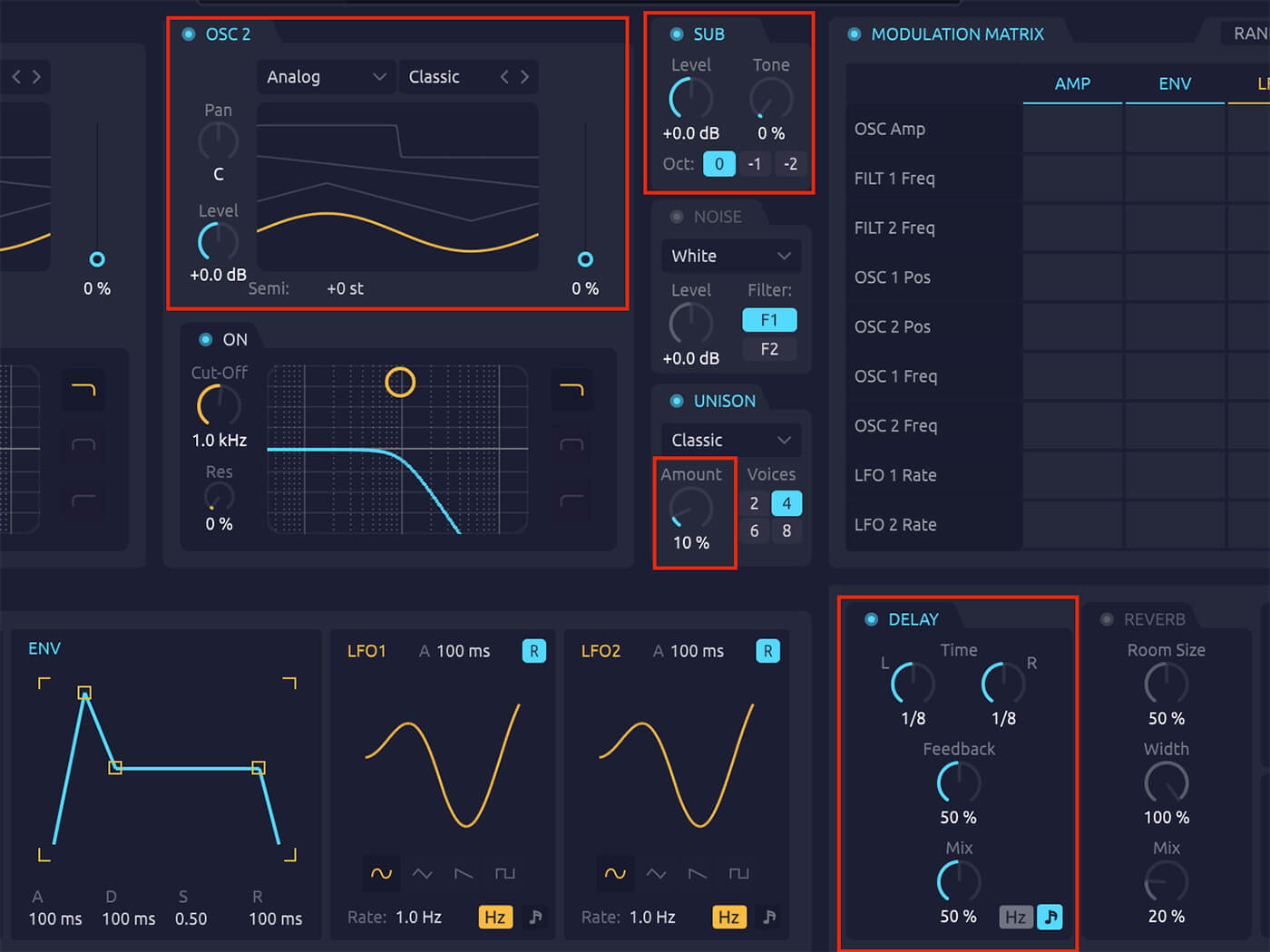 We can then hit the save icon at the top of the UI and create our own ‘init’ patch to use as a starting point in future. 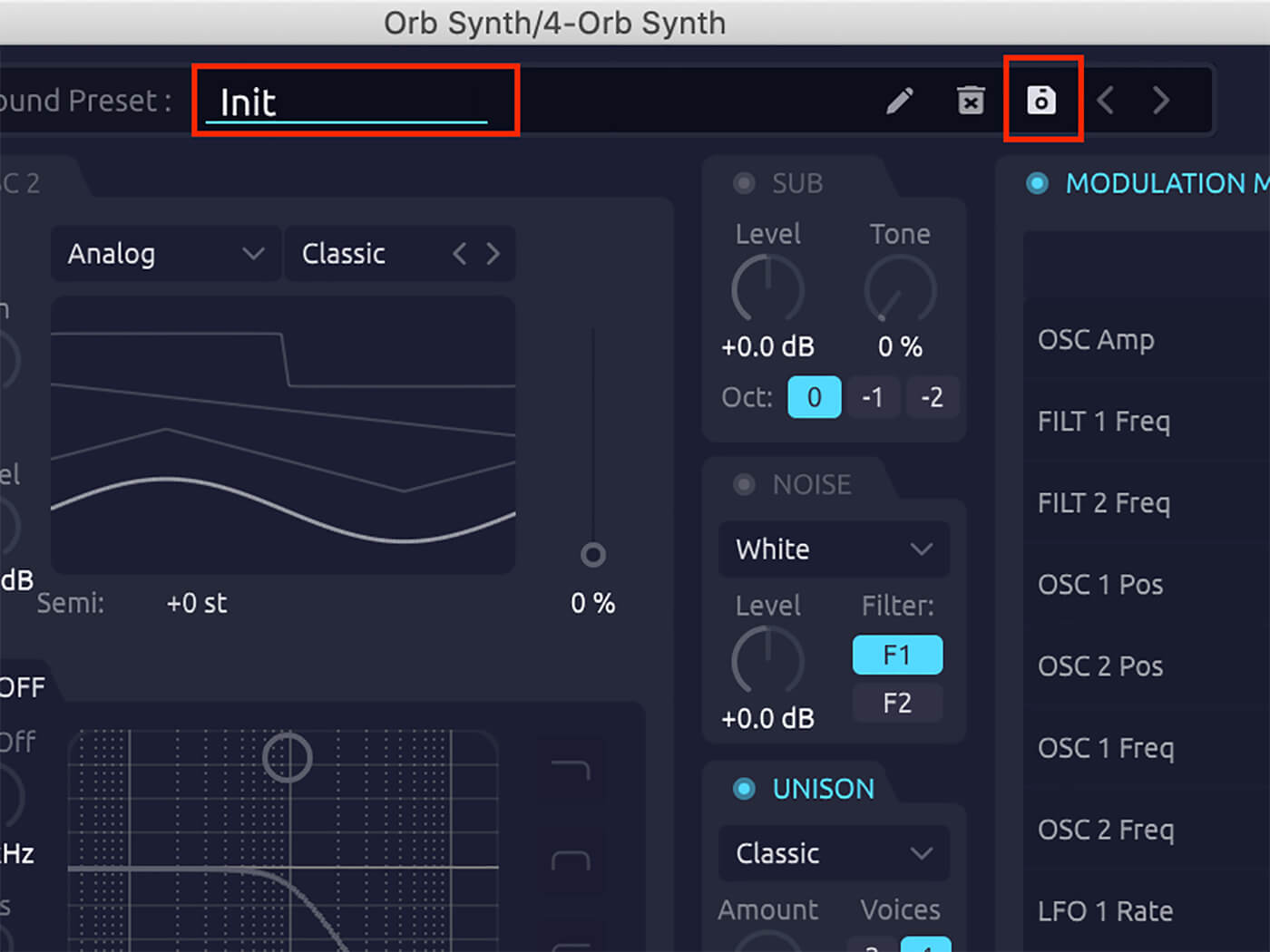 Let’s load our ‘init’ patch and start working on our first sound. We’ve put down a simple four-note MIDI pattern across four bars, alternating between D1 and D#1. If you’re listening on headphones, you might not hear much right now as we have a pure sine wave in the 30Hz range.

We can start by getting both of our oscillators setup. For the first wavetable, keep the category set to ‘Analog’ but choose ‘Subby’ from the second drop-down. Then, enable the second oscillator, set its wavetable category to ‘Custom’ and select ‘StringsG’.

We can already hear our sound starting to take shape. Let’s increase the volume of oscillator one to 5dB, and bring oscillator two down to -2dB. Then we can adjust the wavetable position using the sliders to the right of each oscillator. Set oscillator one to 99 per cent, and oscillator two to 21 per cent. Both of our filters are engaged in low-pass mode, so set the cutoff frequency to 400Hz and 200Hz respectively. We will be modulating both of these later. Now we can adjust our amp envelope to give us a quick attack and an almost full sustain. 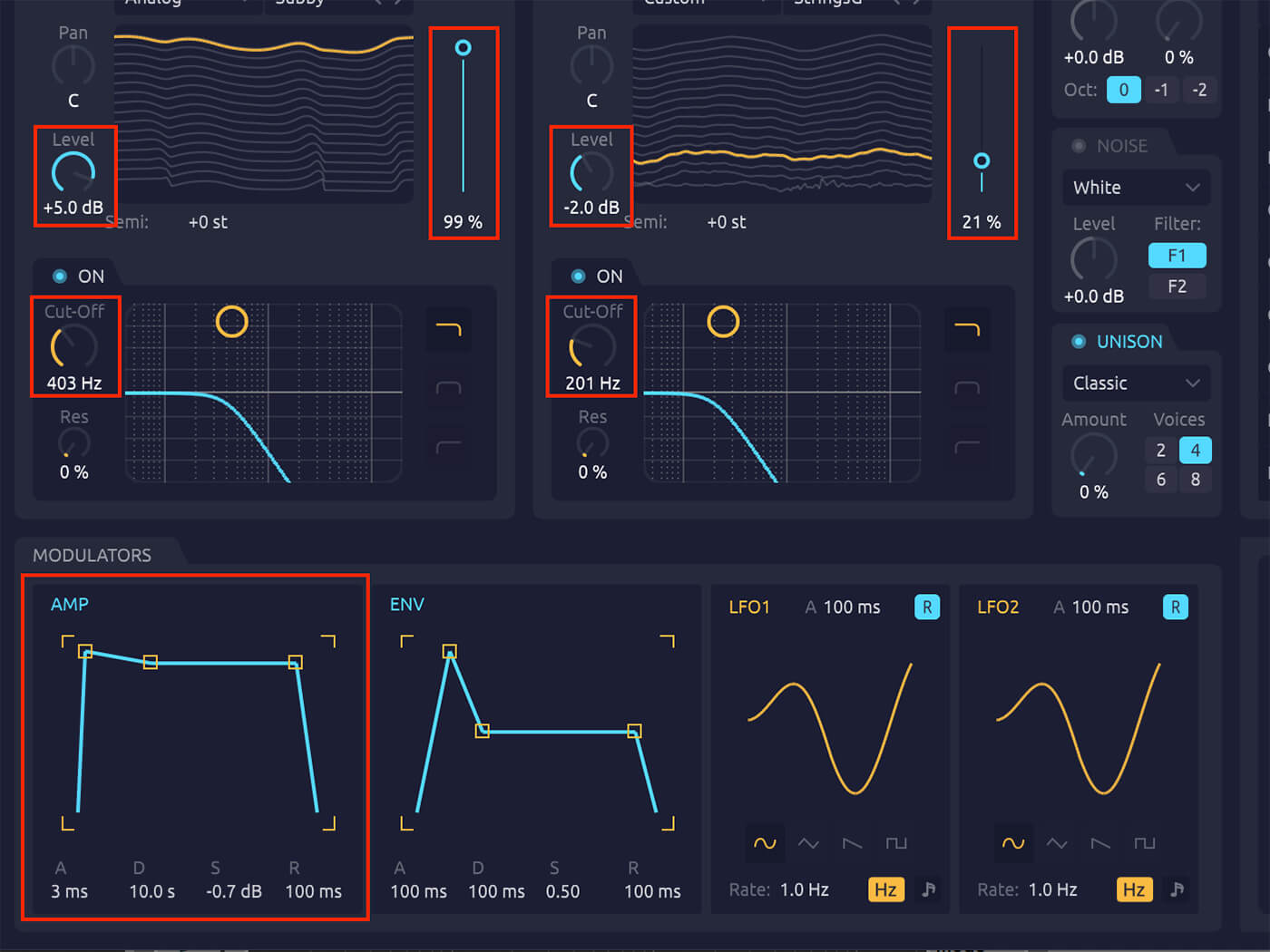 Before we get to our modulation, we are going to enable our sub oscillator, the white noise generator, and increase the unison spread to around 30 per cent. Ensure you route the white noise through filter one and turn its volume down to -40dB. This will allow us to bring in some subtle noise with our filter modulation. With these changes, we should have a wide sound with a solid sub underneath. 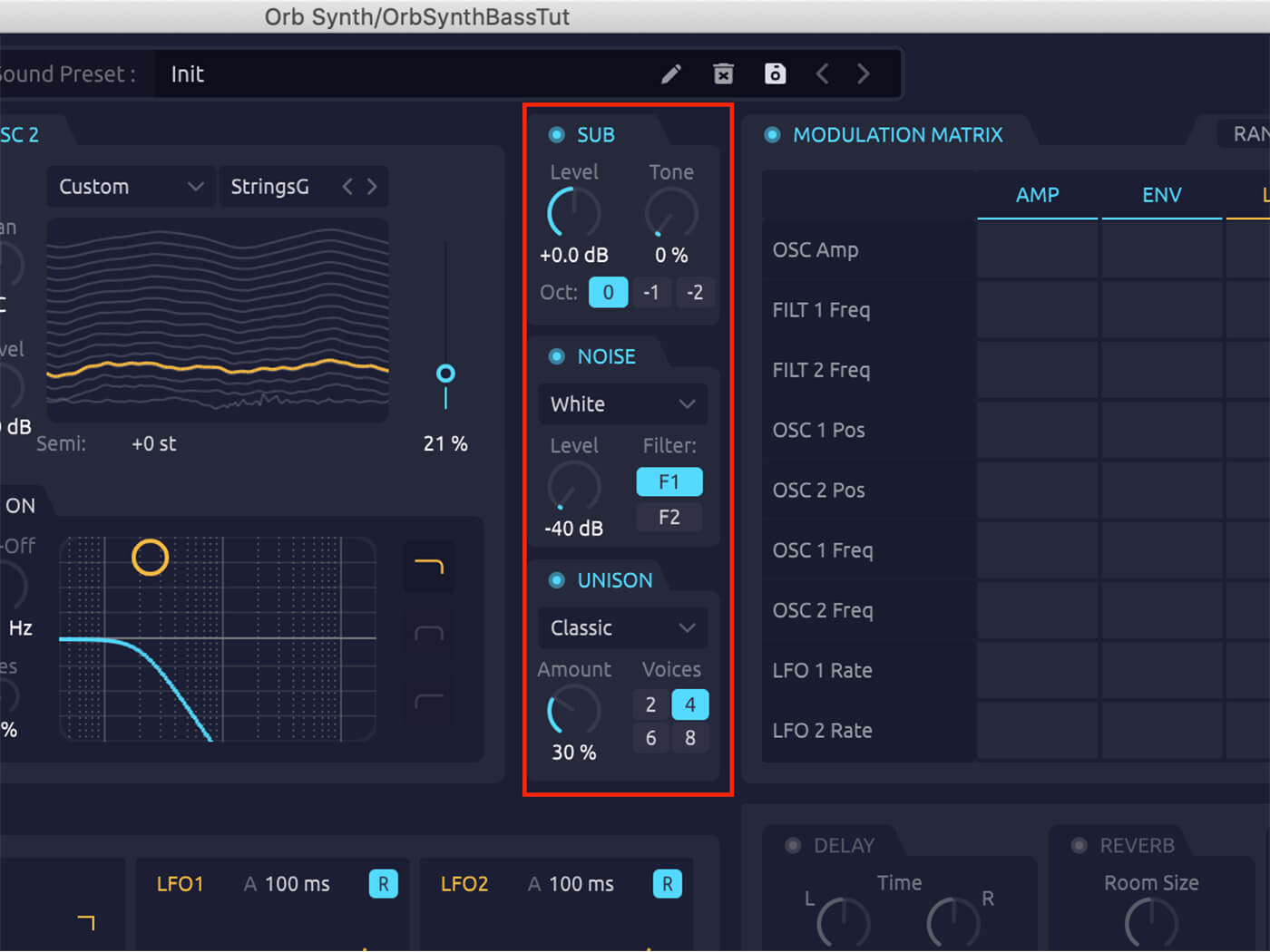 Now we can work on our modulation, which will add some rhythmic movement to our bass. We can start with our envelope. The result we’re looking for is to have the white noise appear then die away over time. To achieve this, bring the sustain down to zero and give it a 13ms attack with a seven-second decay. We can assign this to the frequency of both our filters with a depth of 100 and the wavetable position of oscillator two, with a depth of 48. We can click and drag in either direction within a destination to set the modulation amount. If you double click a modulation in the matrix, it will reset that modulation. 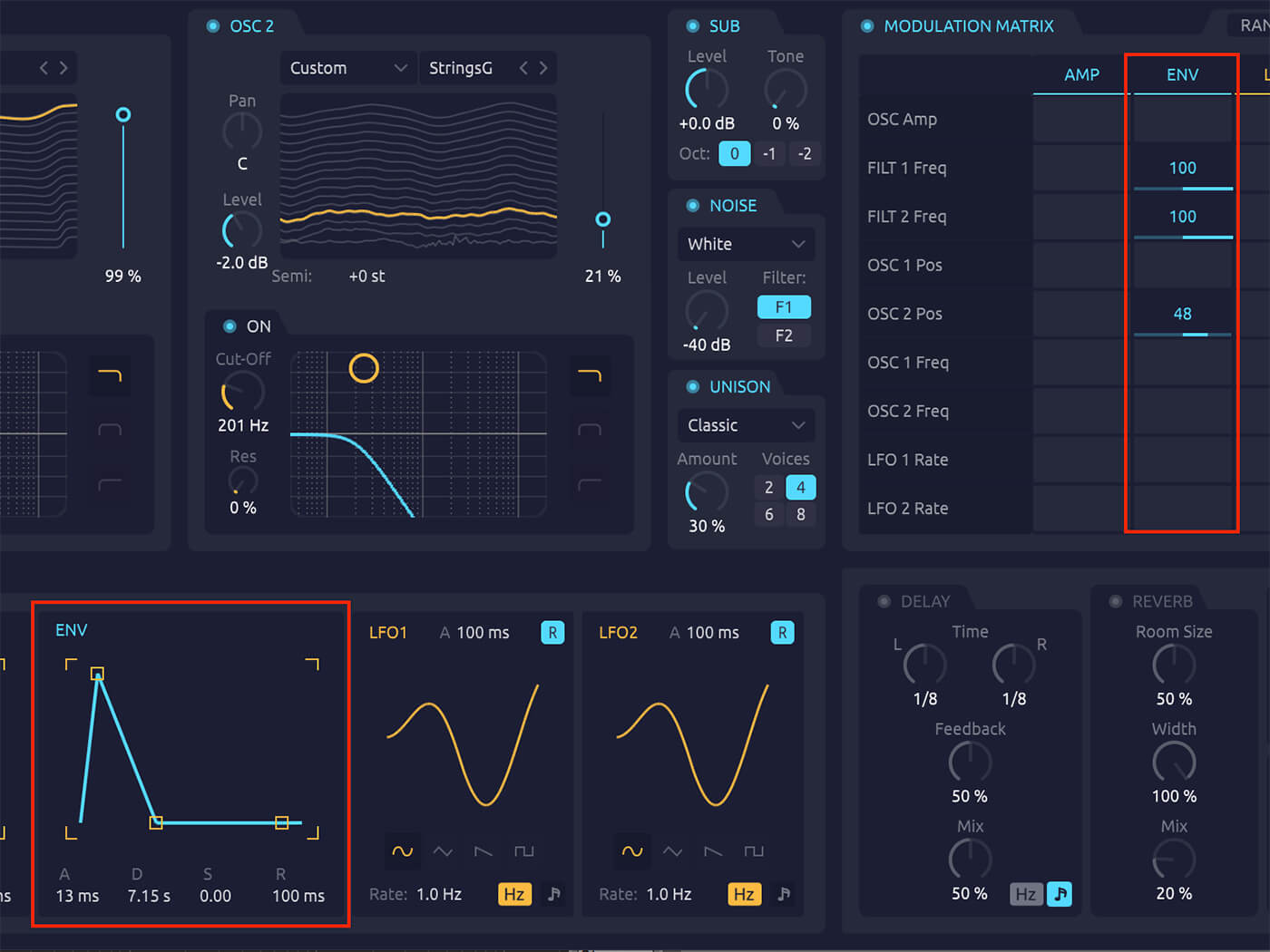 Let’s set up both of our LFOs to modulate parameters that will give our bass sound some movement. For the first LFO, we can set the shape to a saw and set the rate to around 9Hz. We can also adjust the attack to 1ms. For our second LFO, we are going to set the shape to a triangle and then click the note icon in the bottom right corner to sync it to our project tempo. Then we can set the rate by beat divisions; we’ve gone with eighth notes. We are going to assign the first LFO to the frequency of each oscillator; set the depth to around 10 for each. We assign the second LFO to the position of each oscillator; set the depth to about 58 and 12 respectively. Remember that the values we use here do not need to be exact. Be sure to experiment with different modulation depths and LFO rates. 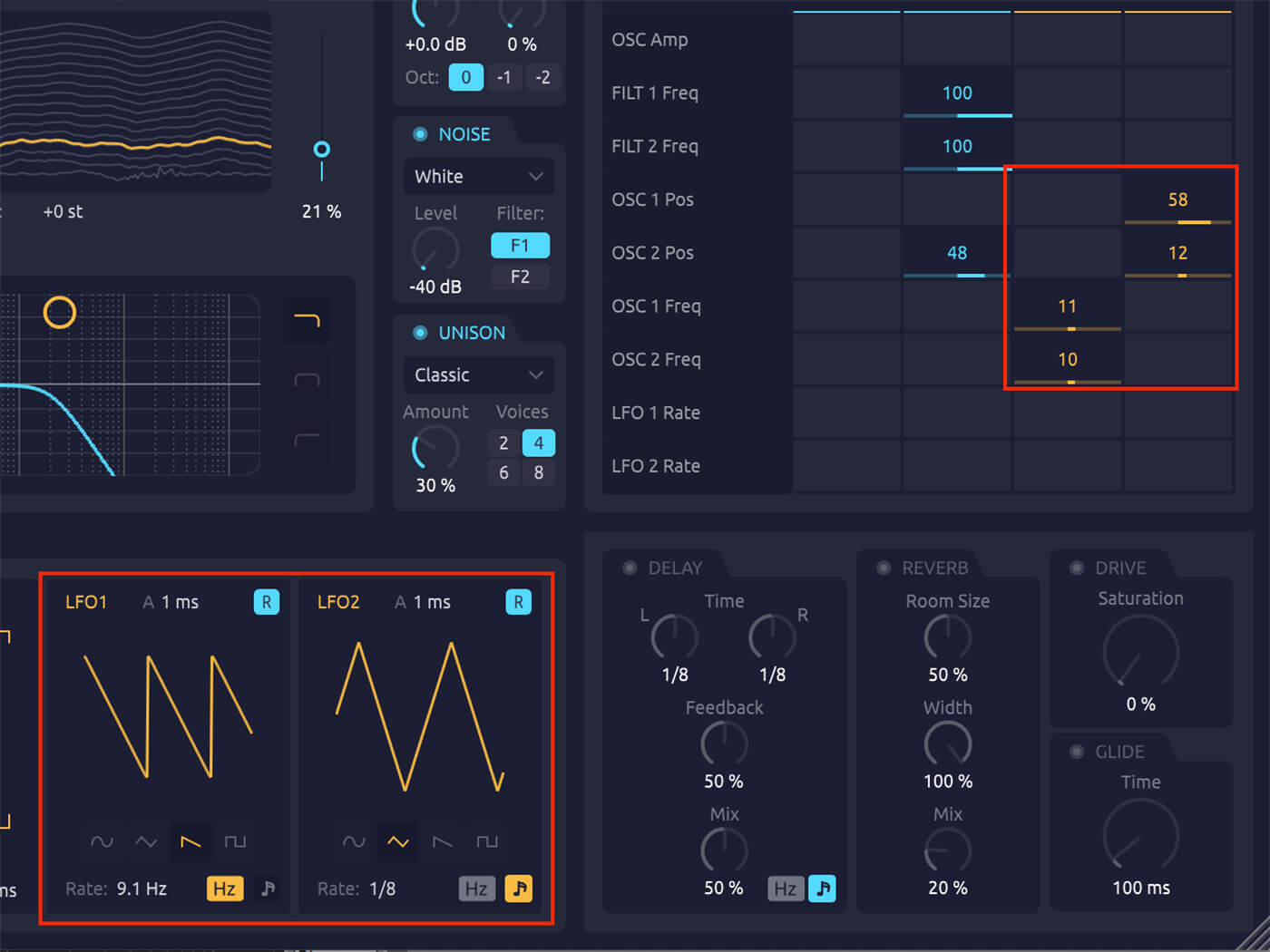 We can finish our bass sound off with a bit of distortion. Head over to Orb Synth’s effects section and enable the drive effect. Bring the saturation up to around 42 per cent; this will add some weight and extra harmonic content to our sound. 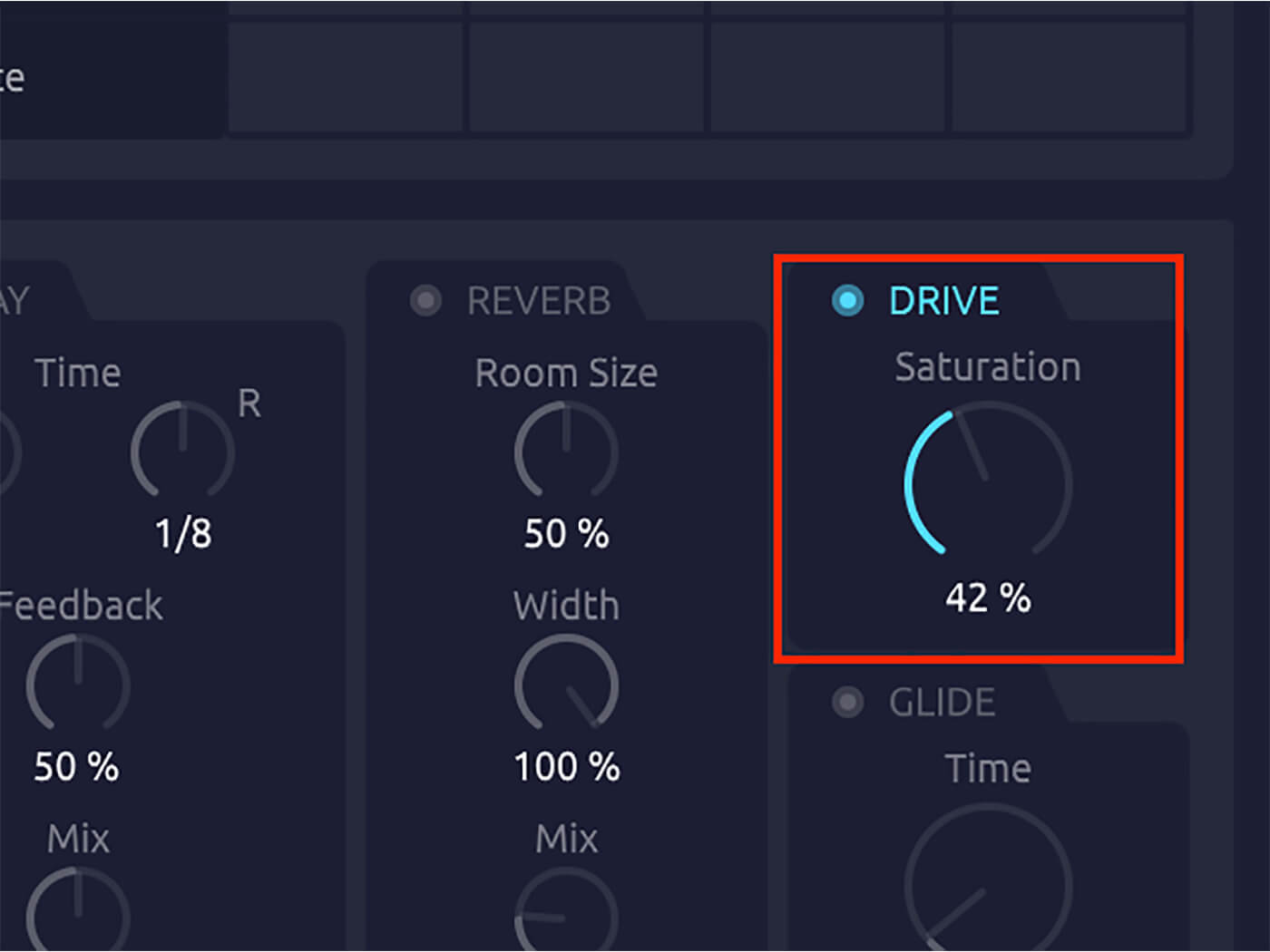 Let’s start designing our second sound. This time we’ll be making some lush chords that would work well in an ambient track. We’ll be starting with the same ‘init’ patch that we created earlier; click the presets menu at the top of the UI and choose your patch from the ‘User’ tab. We’ve laid down a simple four-chord progression over 16 bars. 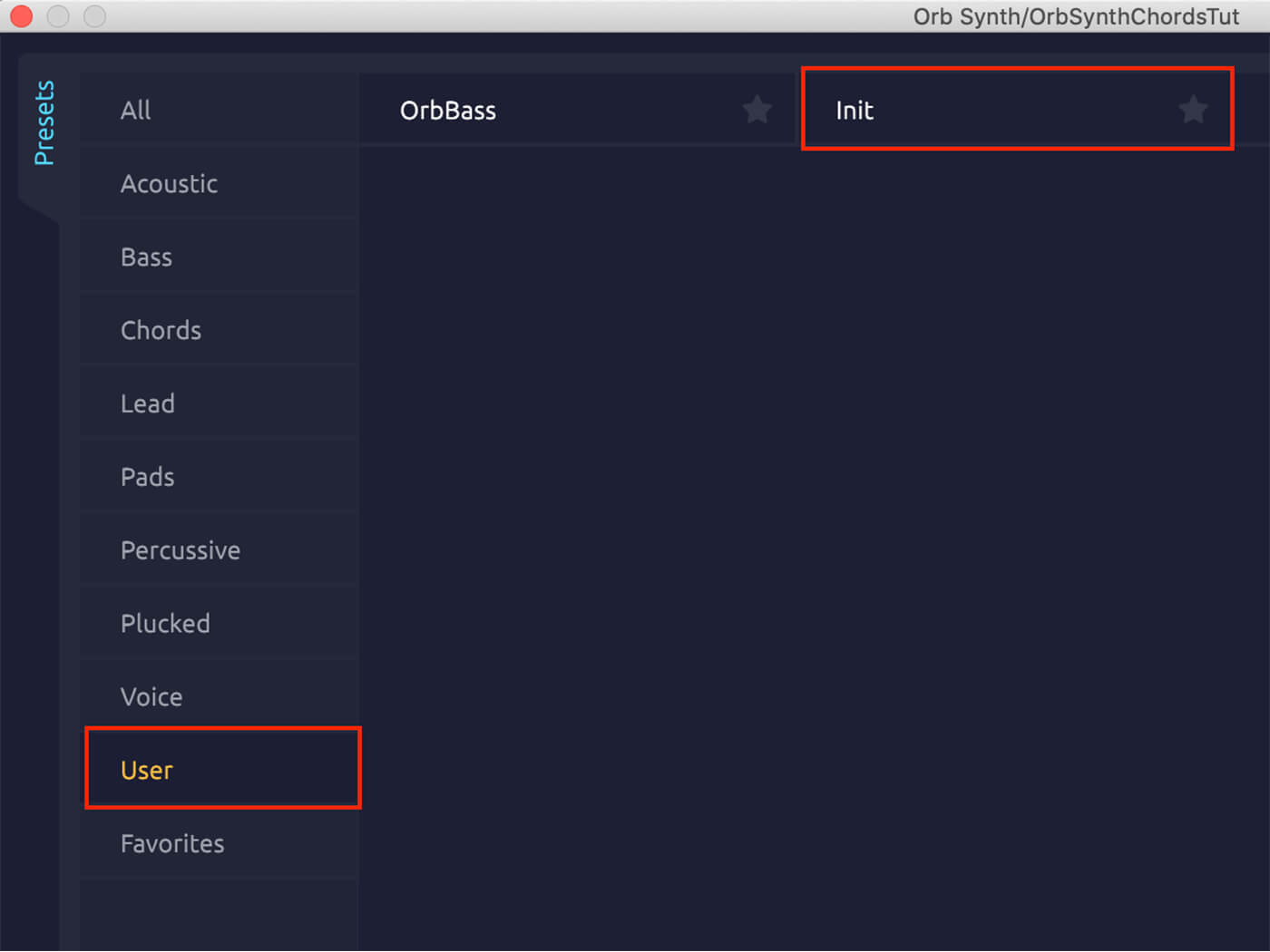 Once again, we will start by configuring our oscillator section. For oscillator one, we’ve gone with the ‘PiccolloFlute’ acoustic wavetable, with the wavetable position set to 68 per cent. Let’s set our second oscillator to ‘Custom’ and choose ‘Wood Pluck’ from the second drop-down. We’ll choose 25 per cent for our starting position. 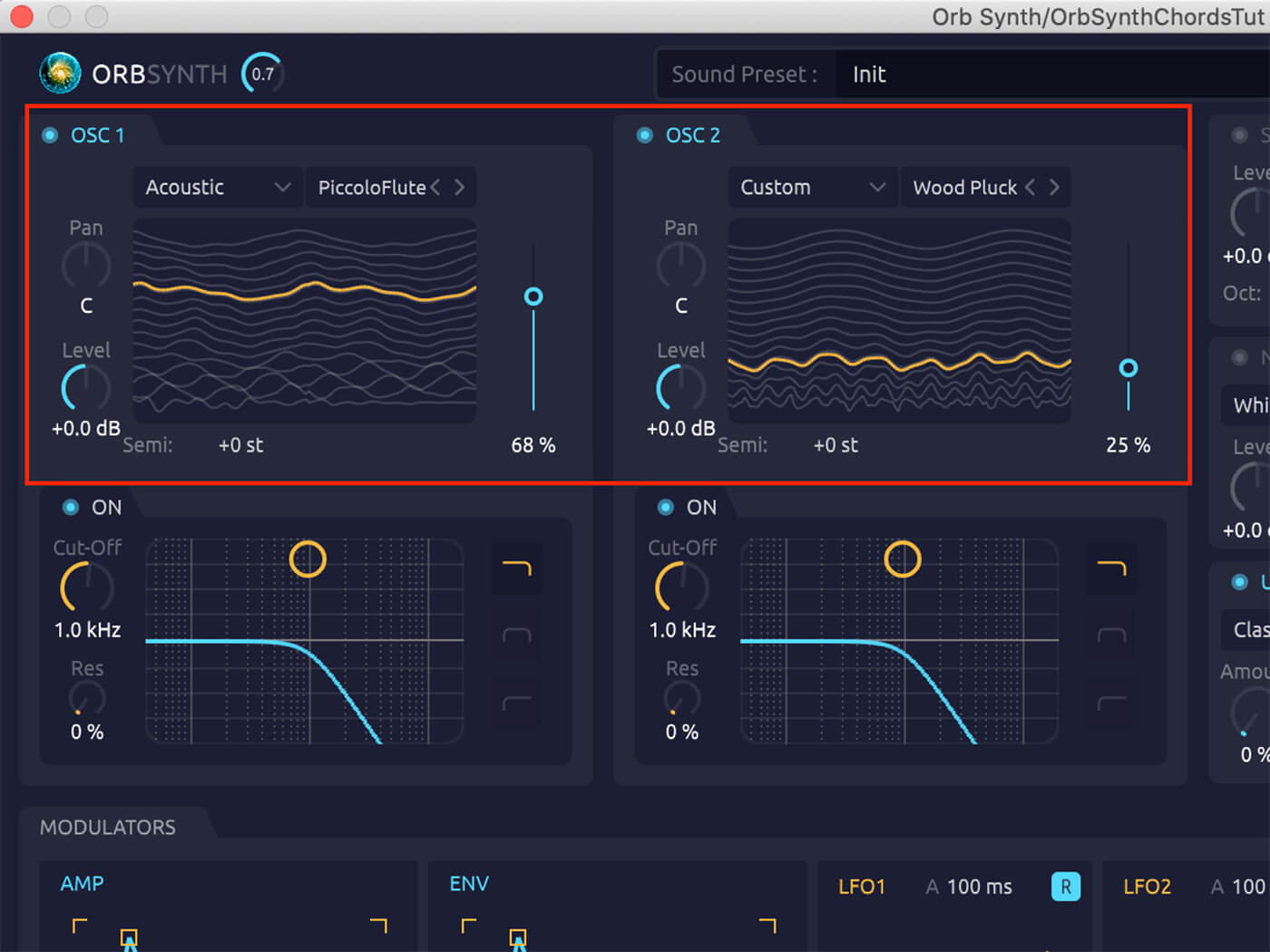 Our sound now bears a passing resemblance to a high-pass-filtered organ. We’ll add some weight by enabling the sub oscillator. Increasing the tone control will change the waveform of the sub, introducing additional harmonics. Let’s set it to around 32 per cent. Now we can change our number of voices to 8 and bring up the detune to 28 per cent. This will thicken up our sound and provide some stereo width. Before moving on to our modulation, we will bring our filter cutoffs down to around 570Hz and 330Hz respectively. We’ll be modulating both of these later to add movement to our sound. 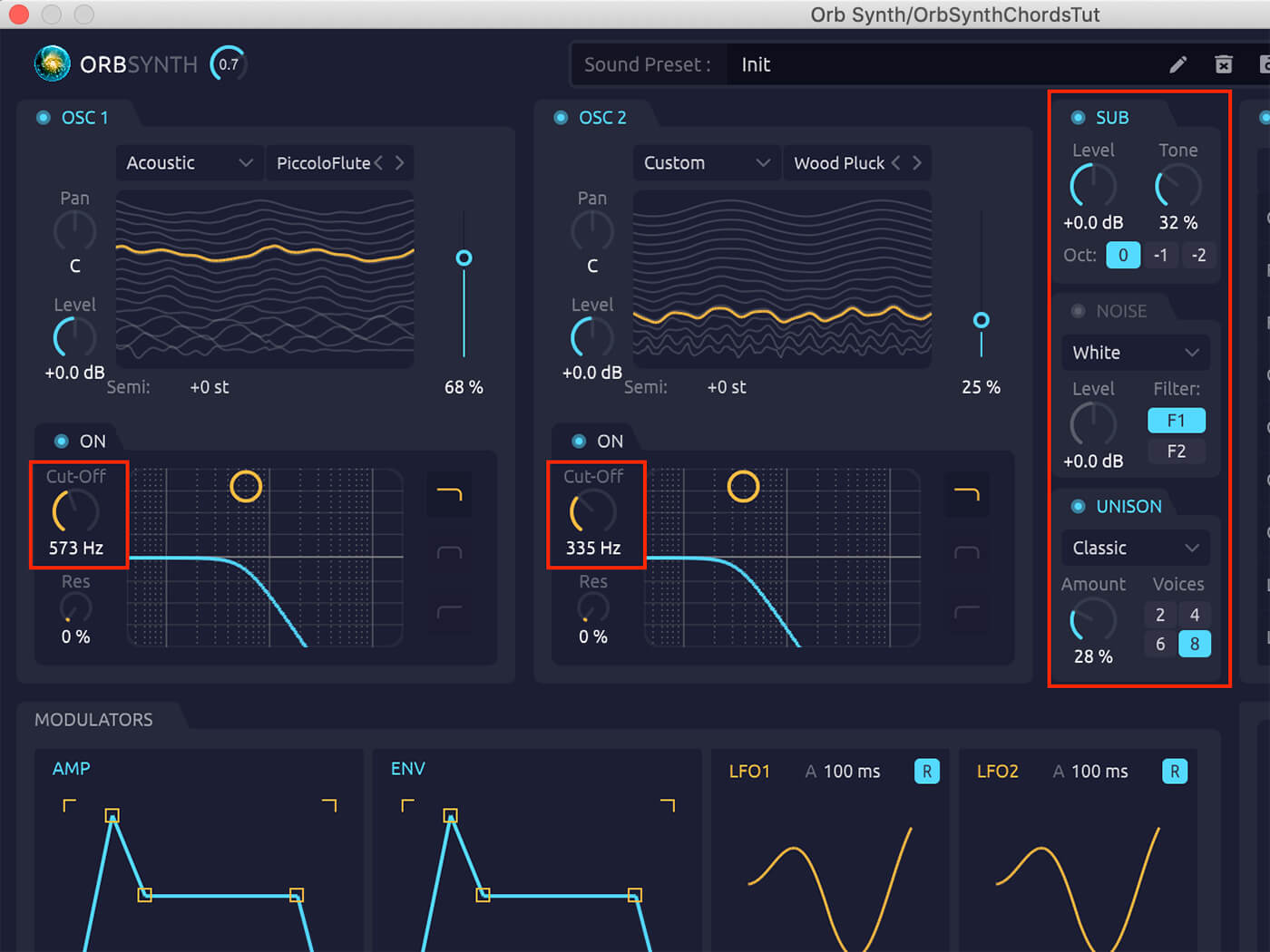 We want our sound to have a quick attack that quickly drops to our sustain level. This will help our delay effect stand out more later. We will set the attack of our amp envelope to around 8ms with our decay at around 27ms. We can drop our sustain down to about -8dB and leave our release at its default setting. With our volume shaped, we can start configuring our three remaining modulation sources.

Set the attack of the second envelope to around 1.6 seconds and leave the rest of the parameters at their default settings. Since we want to create a more pad-like chord sound, we want lots of slow modulation. We will set LFO one’s rate to 0.4Hz and LFO two’s rate to 0.1Hz. We can add some subtle pitch modulation to both of our oscillators using LFO two; set the depth to around eight. We’ve routed our modulation envelope to the cutoff of both filters and oscillator two’s position. This will give our second wavetable some movement, and open the sound up over the first half of the chord. 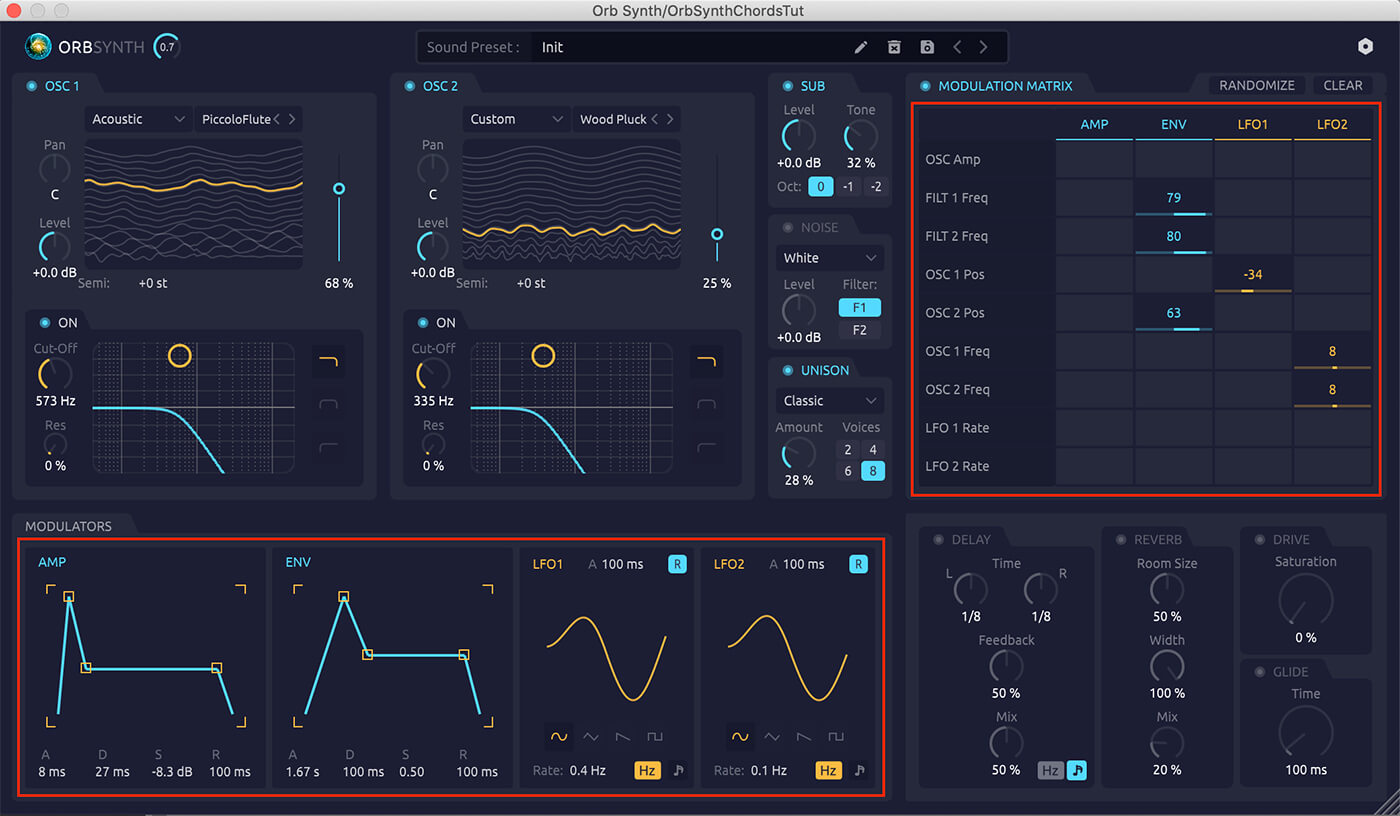 To finish our sound, we’ll be using Orb Synth’s delay and reverb effects. Let’s enable the reverb first and set the room size to 84 per cent. We’ve left the mix at 20 per cent and the width at 100 per cent. While Orb Synth’s reverb can sound good, a dedicated reverb plug-in could further improve this sound.

Now let’s enable the delay. The delay plays a massive role in the overall sound, and we were pleased to find that the default settings got us exactly what we wanted. With that said, we encourage you to try different delay times and feedback settings. Let’s take a listen to our final sound. 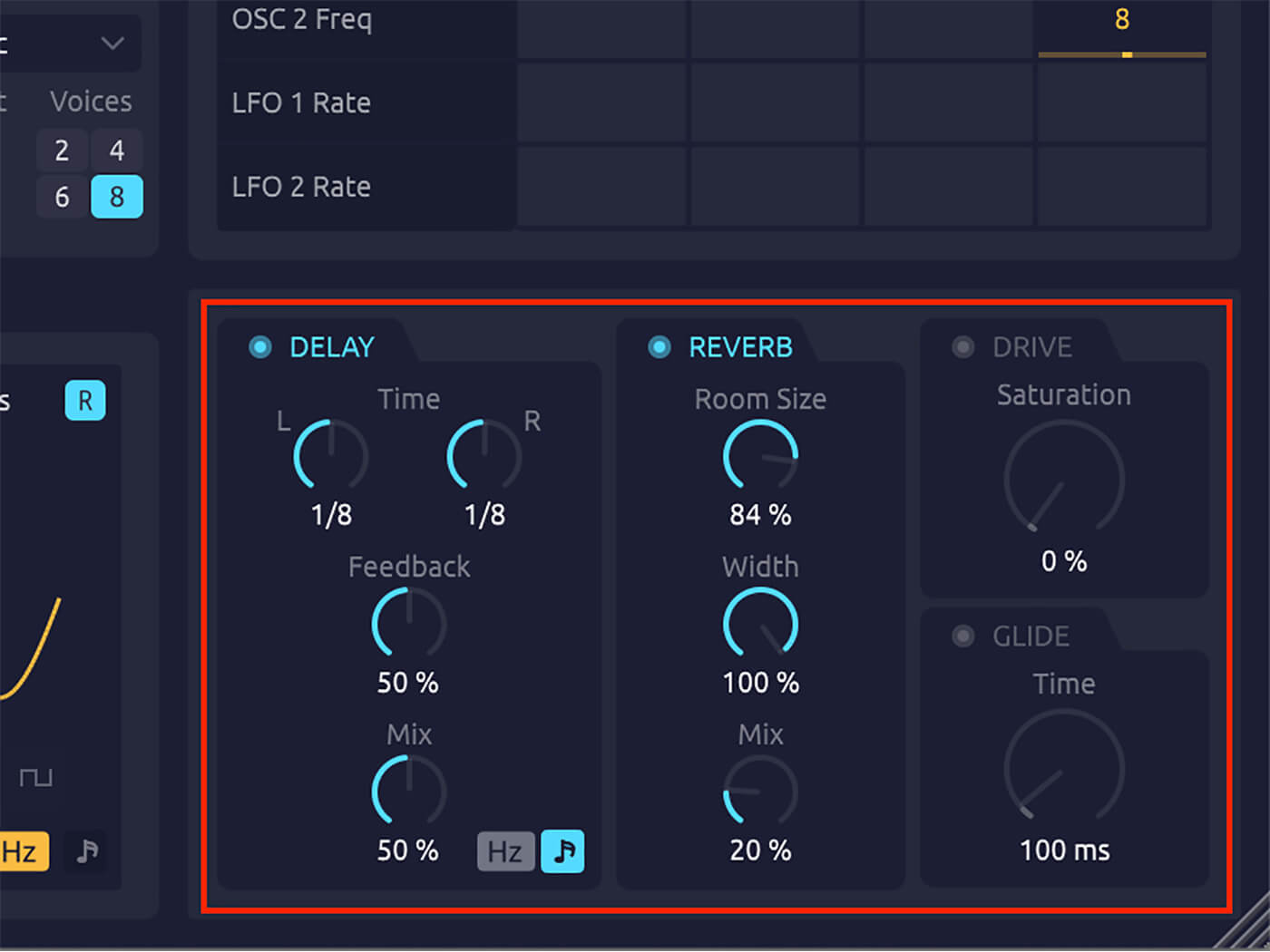