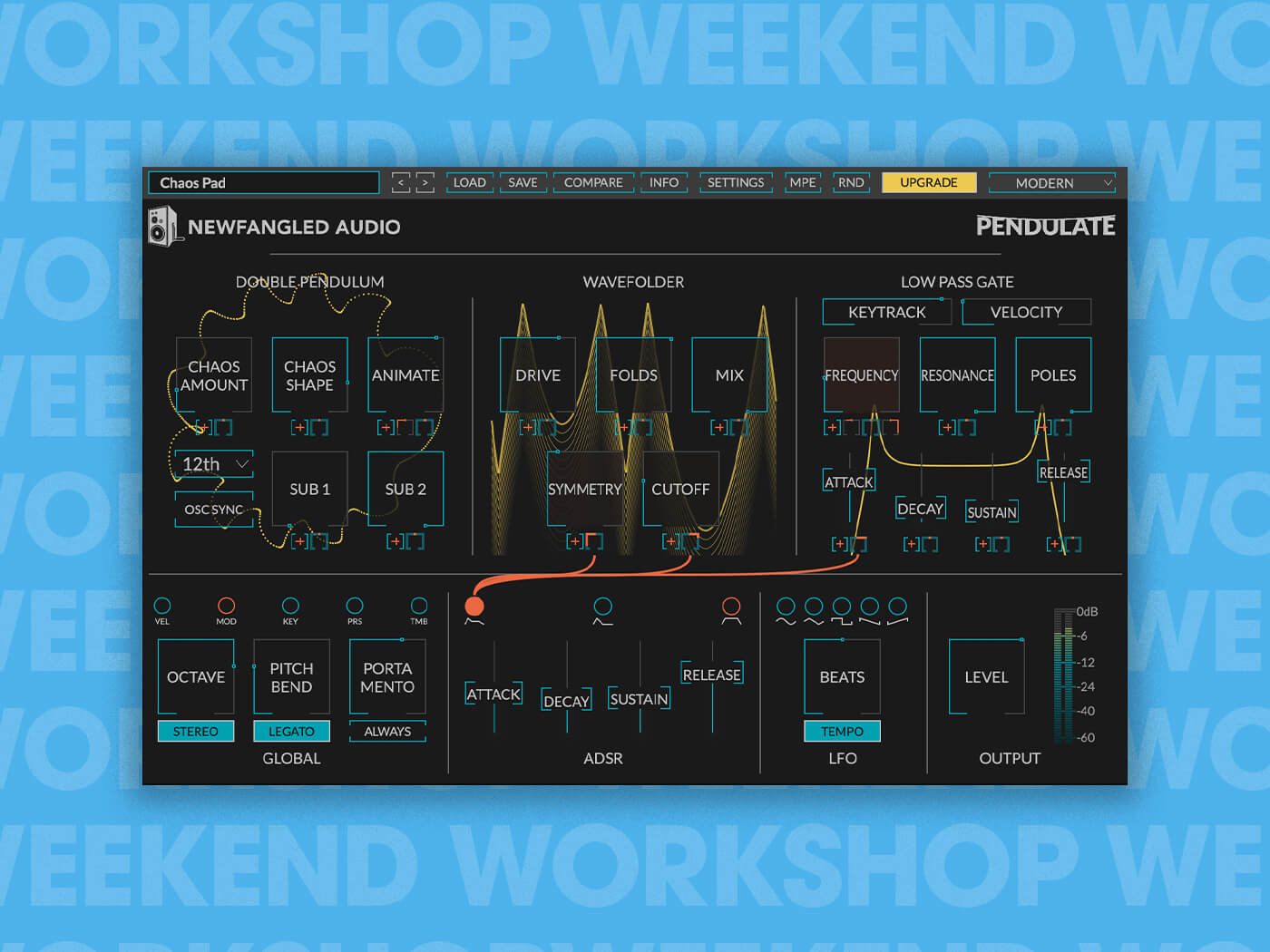 Put on your Vuarnet sunglasses, grab your favourite sci-fi book and step into a neon dream as we create some driving synthwave sounds with Pendulate.

Pendulate is a new chaotic monosynth available for free from Dan Gillespie of Newfangled Audio. The design is loosely based on a “West Coast” architecture inspired by the designs of Don Buchla and Serge Tcherepnin. Often that style is associated with the Buchla 259 Complex Waveform Generator, which uses a wavefolder to add overtones and brightness, and the Buchla 292 Low Pass Gate. Let’s get into how you drive this beast in the next section. 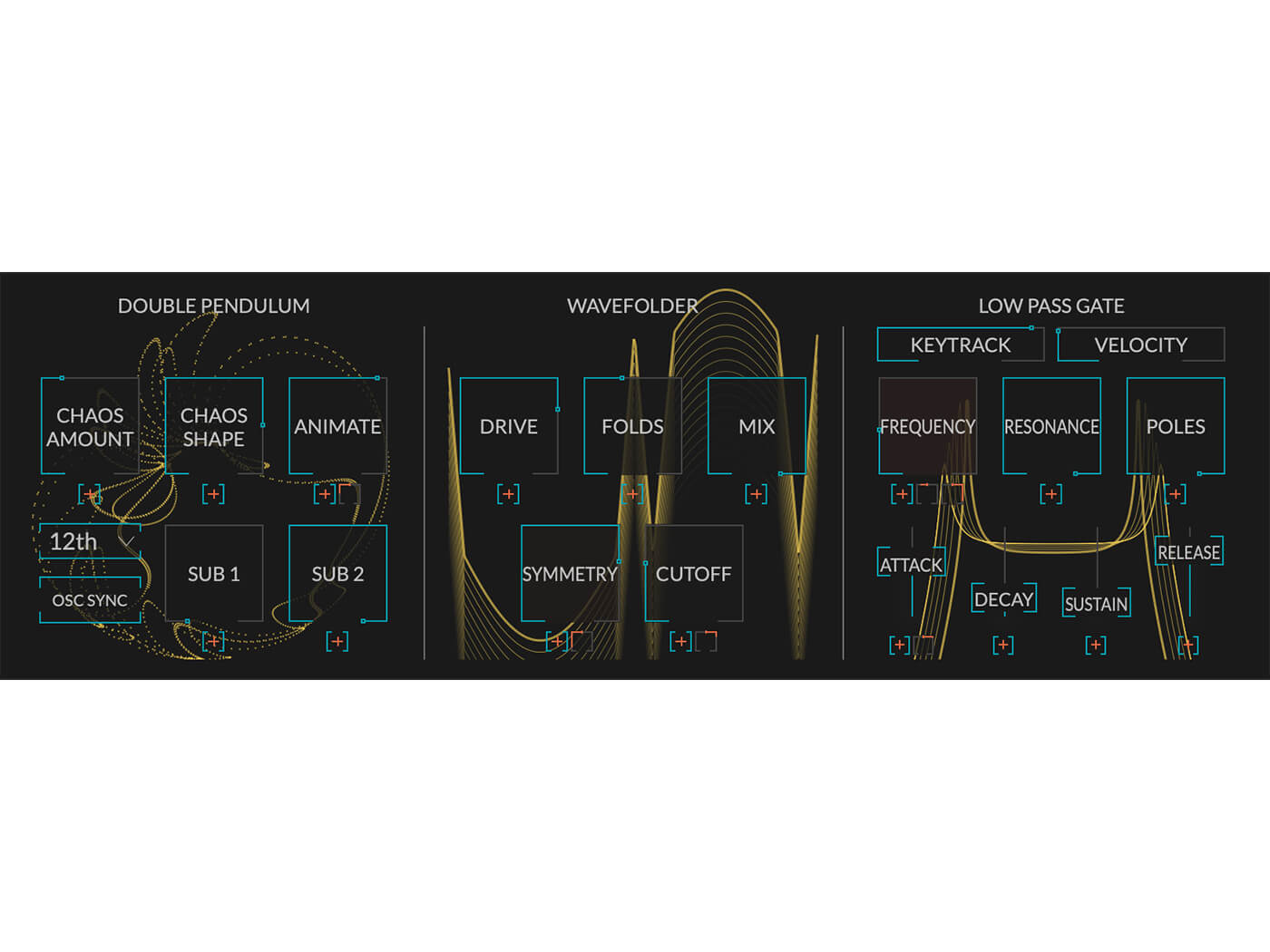 The oscillator in Pendulate employs a novel approach that appears to be the first of its kind. The physics of a double pendulum drive the sound generation in this oscillator from pure sine waves to total chaos and everything in between.

In case you are wondering, a double pendulum is created by attaching one pendulum to another, providing two degrees of freedom. The first arm of the pendulum represents a sine wave keyed to the note you play, and the second arm represents a chaotic oscillator that interacts with the first. The controls allow you to vary the physics of this double pendulum by changing the Chaos Amount, and the ratio between the length of the first and second pendulum. The interval between the two is set in musical terms using the dropdown, a 12th in the example above.

The wavefolder has five controls to distort, fold, and offset the oscillator output. Modulating these controls yields a range of harmonic variations. The Low Pass Gate acts as both a voltage-controlled amplifier and a low-pass filter. Opening and closing the gate changes level and frequency together, similar to how acoustic instruments behave.

The Fat Line Bass preset from the Korg Polysix synth is a popular choice for synthwave basslines. We’ll use this sound as inspiration to create something new using Pendulate, but with a little added chaos.

It is helpful to start building a sound from an initialised patch where everything is turned down or off. To do this, choose one of the ‘00 Init’ patches with OpenGL on or off. Both will produce the same sound. OpenGL on will use your onboard GPU for rendering graphics.

As we learned in the first section, you will hear a sine wave since the Chaos Amount is zero. This is the source of our bass sound along with a bit of Sub Oscillator. Increase the Sub 1 level to about 50 per cent. 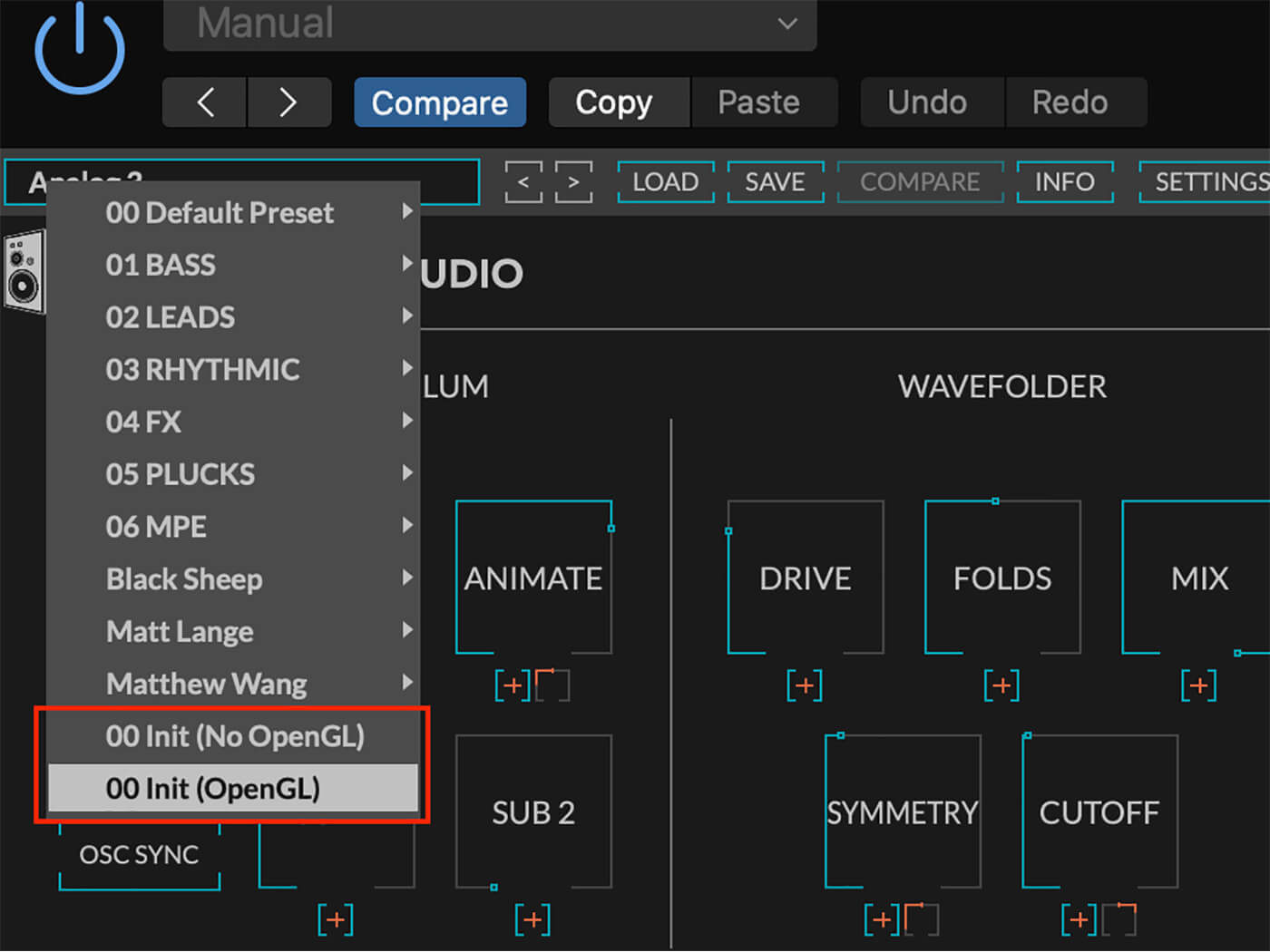 In the Global section set Octave to -1 to shift the range lower. Tap Stereo if you want a wide bass sound.

Start giving the sound some edge by increasing Drive to 11dB in the Wavefolder. Increase Folds to 0.7 and reduce the mix to 70 per cent, so we get some of that pure sine wave coming through to help the low end. Adjust the Symmetry to 60 per cent and notice how much harmonic variation you can achieve with this DC Offset.

In the Low Pass Gate section, adjust the envelope to get a snappier bass that will work when playing 1/16th notes. We’ll get that by setting the Attack at 1ms, Decay at 25ms, Sustain at 0 and Release at 14ms to start. Play with these values as you sequence the bass and notice how it changes the sound. Adjust the keytrack to 100 per cent, so the filter frequency tracks the note frequency and set Poles to 2.0 for a sharper cutoff. 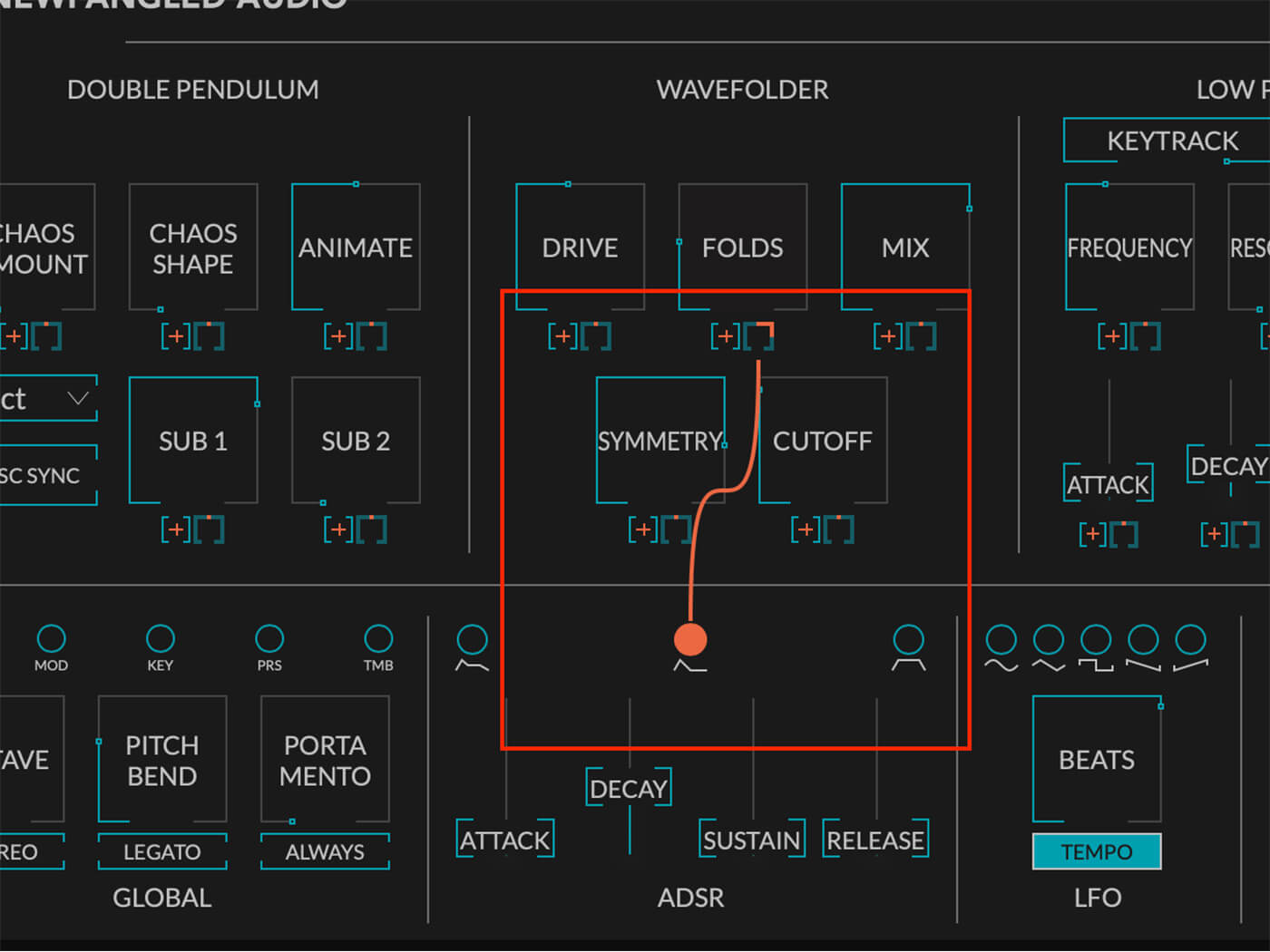 Pendulate has an ADSR envelope that can be used to modulate anything. We will use that to vary the Folds control for a more complex sound. Set the envelope, so Attack is 1ms, Decay is 200ms, Sustain is 0.0 and Release is 1ms. Then, click the AD modulation output and adjust the Folds modulation knob as shown above.

This is a great starting point for bass sounds. From here, there are load more places you can take your bass, with plenty of variation. Try adjusting Chaos Amount to bring in the second waveform and Chaos Shape to mix it up. Start sequencing bass notes to build your synthwave foundation. Stick with it, the next sound we are going to create is great fun to play on top of this foundation.

Let’s create a dynamic sound that will gradually bring in some of Pendulate’s chaos as you hold a key down.

Set up the wavefolder to add rich overtones by adjusting Drive to 7dB, Folds to 1.5, Symmetry to -23 per cent. We will use the Low Pass Gate to create a slowly changing envelope with the following settings: Keytrack 100 per cent, Frequency 1800, Resonance 7.7, Poles 2.4, Attack 600ms, Decay 4ms, Sustain 1.00, Release 1520ms. In the Global section, set Octave to -1, Portamento 90ms, Stereo On, and Legato On. 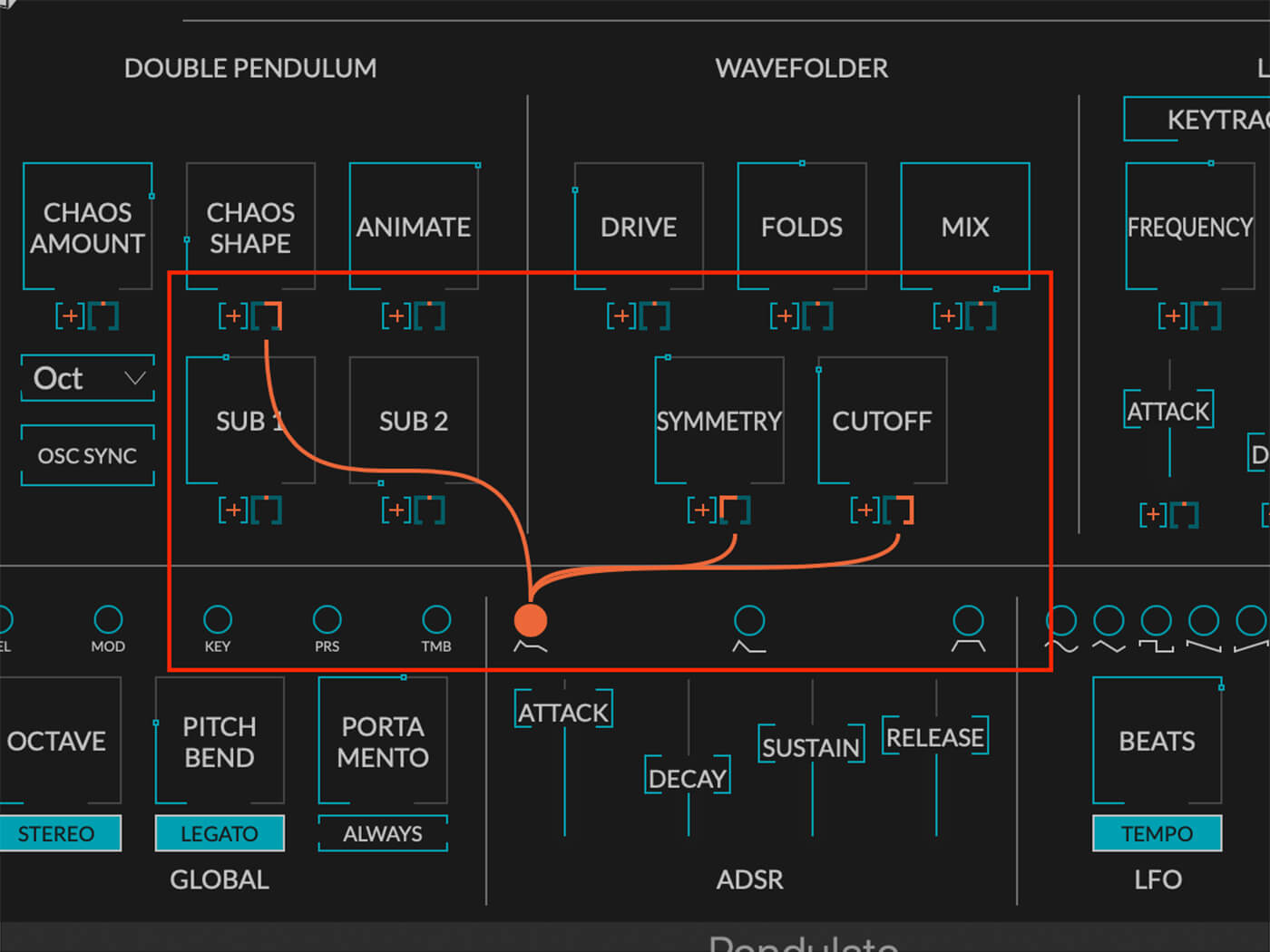 Next, we want to create some motion. To achieve that, we will use the ADSR Envelope to modulating several parameters. Set the envelope parameters; Attack 2000ms, Decay 130ms, Sustain 0.6, and Release 900ms. Now click the ADSR modulation output and adjust the modulation knobs for Chaos Shape, Symmetry, Cutoff and as shown above.

Try it out and let the music flow. Play legato to get a nice portamento slide and hold notes to hear the evolving chaos.

Throw in some vintage drums and reverb to start building your synthwave track. 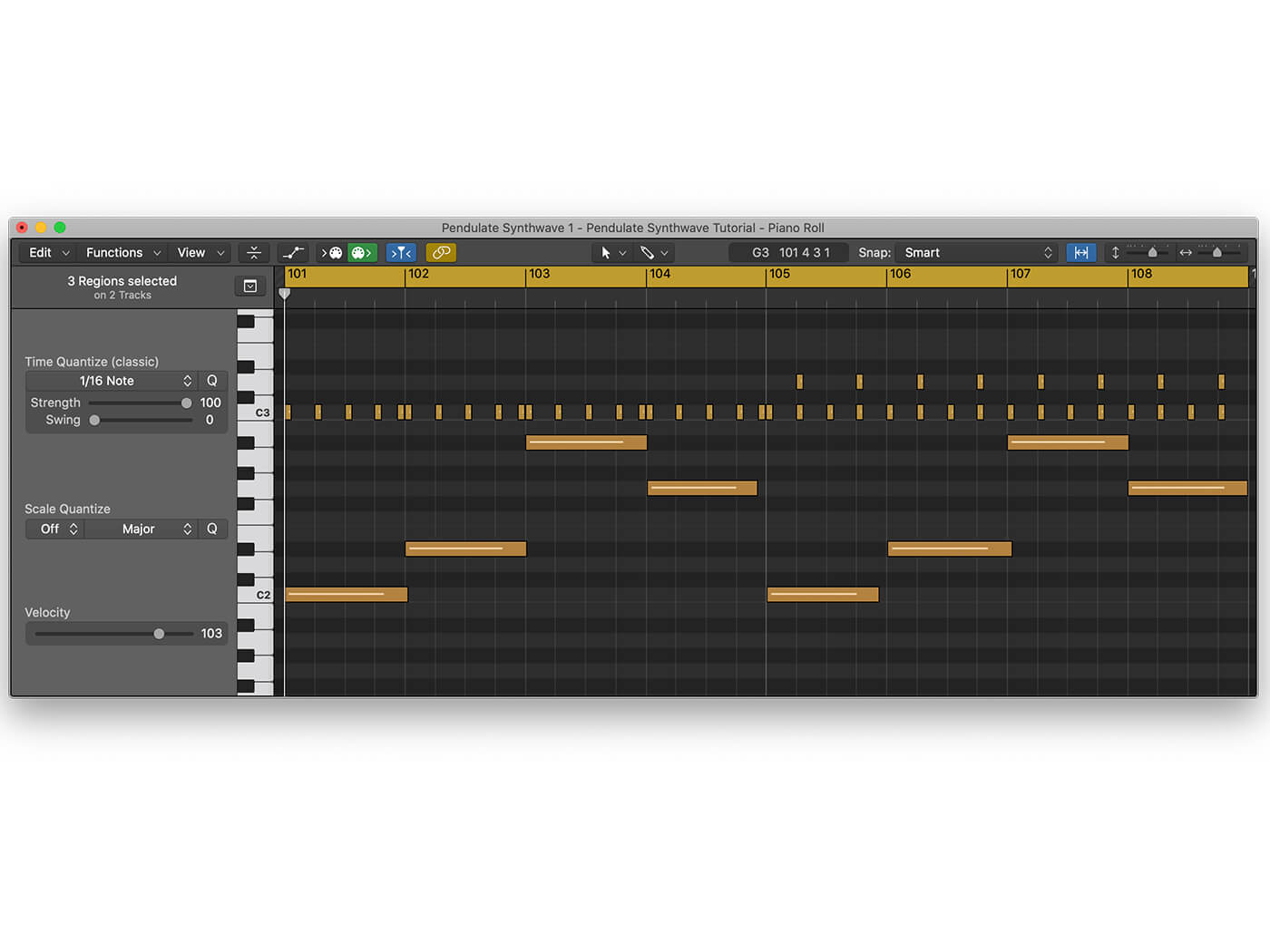 Next, let’s create a percussive sound using the Low Pass Gate to learn how it’s different from a Low Pass Filter. As a shortcut, we’ll start with the bass sound we created earlier and play it in a higher octave. Then, we’ll change just a few parameters to create a new sound that we can trigger with an arpeggiator.

Starting with the bass patch from part one, change the chaos shape to 80 per cent, turn Sub 1 down to 0. Reduce Folds to 0.7, increase Symmetry to 60 per cent, and Cutoff to 8000. We’re aiming for a might brighter sound here. 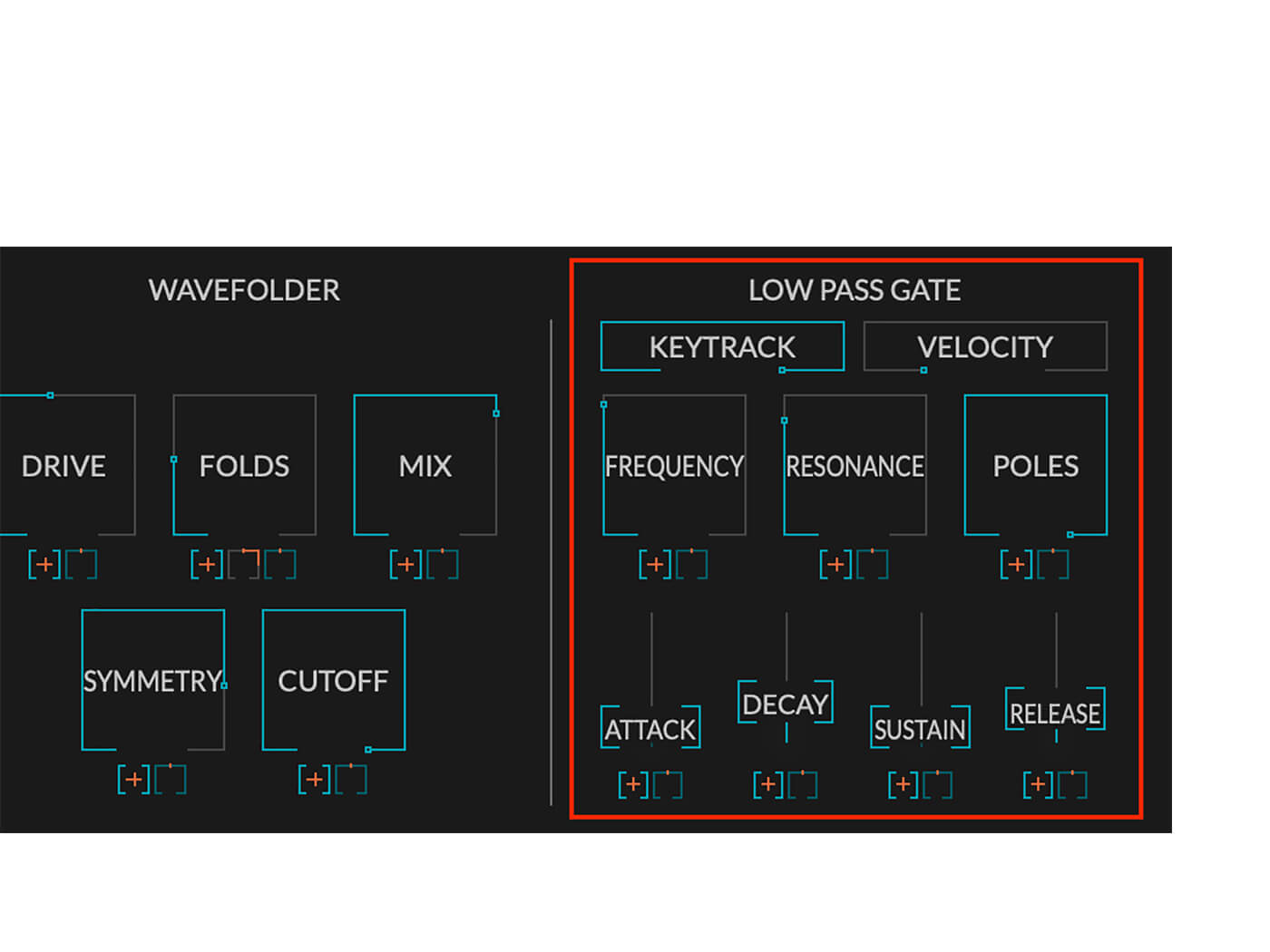 Here’s an example playing this sound while varying the Low Pass Gate Frequency and playing over the sound from section three.

Now that you have programmed a few new sounds, you can create many more by just making a few tweaks in Pendulate. The sonic palette is rich, considering there are only a small number of controls to learn. This makes it an excellent synth for building your own sounds while not getting lost in the details. It also has an unpredictable side with the chaos factor that makes it a great source of happy accidents.

Synthwave production techniques include the use of a lot of reverbs. So, consider using reverb on each track and compressing the outputs before the final mix to get that synthwave sound. Check out the free Valhalla Supermassive or Tal Software Tal-Reverb 4 options reviewed in this list of free reverbs.

Another common technique is to add a compressor on the bass track and send the kick drum to the sidechain input to get a pumping sound where the bass ducks slightly when the kick drum hits. By employing these basic production techniques, your final track should begin to come together.

Here’s an example clip using the sounds we created today.

We’d love to hear what sounds you’re able to create using Pendulate. Please share your results with the MusicTech Creator Community on Facebook. Tell us how you got on and what other tutorials you’d like to see.