Weekend Workshop: Get creative with gates

Complete the Weekend Workshop and submit your work for a chance to win £900 of Sonnox plug-ins. 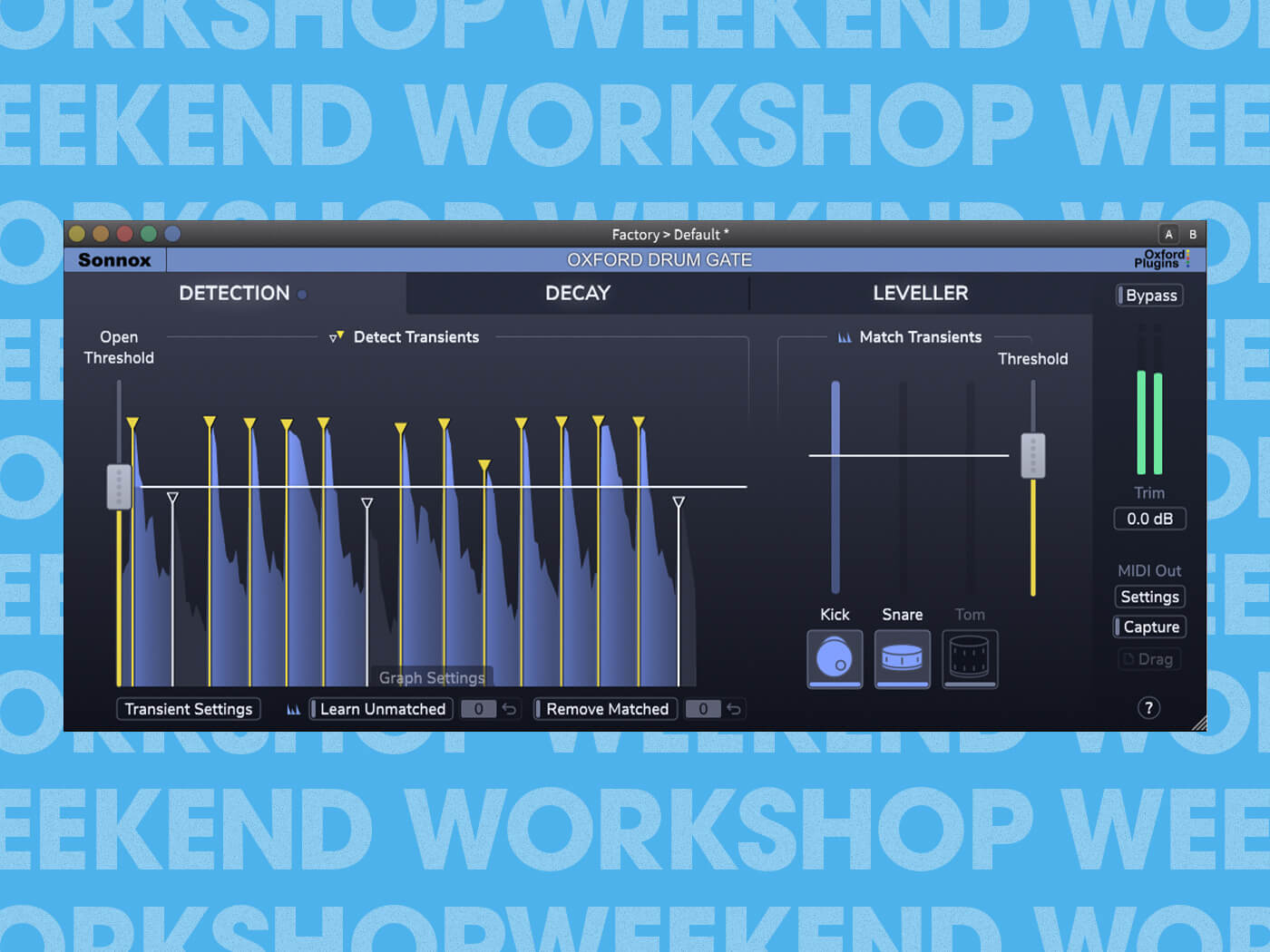 In this instalment of our Weekend Workshop tutorial series, we’re taking a moment to reconsider one of the most basic utilities in every recording engineer’s toolbox: the noise gate.

In very simple terms, a gate only allows the sound to pass through when it goes above a certain level, known as the threshold. When it drops below that threshold, it attenuates or mutes the signal.

For a chance to win a Sonnox Elite plug-in bundle and Oxford Drum Gate (worth over £900) share your creations in the MusicTech Creator Community Facebook Group. More details below.

If you regularly record bands or work in live sound, you’re probably more than familiar with the use of gates. However, it’s quite possible that many of you have never used one. That’s mainly because the rise of contrasting approaches to music-making has introduced something of a divide: lots of accomplished musicians, producers and engineers may never have experienced a traditional studio-based band recording environment, where learning to mic a drum kit and set up gates was an essential task for engineers.

If you make sample-based music with hardware, work entirely in the box or simply don’t record live drums, there’s a very good chance that you don’t have a need for gates in your typical workflow. In that case, you might be missing out on some interesting creative opportunities.

In this workshop, we’ll run through two creative applications of gates in the box. Firstly, for cleaning up sampled drum beats and then for manipulating a ‘top’ loop. But first, a quick history lesson…

To understand what gates do and why they’re sometimes important, we need a quick refresher on some classic recording techniques. If you’re already a fully paid-up member of the gate fan club then, by all means, feel free to skip ahead to the practical applications below. If you’re not, let’s take a look at the drum recording process as the perfect gate primer for those who aren’t so familiar.

As we mentioned already, a gate is fundamentally a device that allows sound to pass through when it exceeds a certain threshold. Why is this necessary? Picture a drum kit with a selection of microphones placed appropriately to record each of the key elements. It doesn’t particularly matter how many mics you imagine here, as the same principles apply no matter how complex the recording setup gets, but for the sake of argument let’s say we’ve got a kick mic, a snare mic, a hi-hat mic and a pair of overheads. Even if we place the mics with the utmost care, it’s just about impossible not to get some degree of ‘spill’ between them; the hi-hat might be audible via the snare mic, for instance, and vice versa.

In some cases, you’ve also got the rest of the band to think about. Can you hear the guitar through the drum mics? The room ambience alone can even be problematic when recording a drum kit in a dedicated drum room; you want to record the room sound on its own mic, but it’s probably going to make your mix a lot easier if you don’t also have ambience on every other channel of the drum kit recording.

One of the most common applications of gates is to avoid exactly this problem; if we carefully set up a gate on the snare mic signal so that it only allows sound through when the snare is hit and the signal goes above the threshold, then we can suppress everything else in between. In practice, though, it’s often not possible to get this absolutely 100 per cent perfect.

There are plenty of other instances where a gate might be handy. Guitarists often use a gate pedal to suppress unwanted hum or hiss between notes, for instance. Engineers have developed all sorts of alternative approaches to solving similar problems – from tracking instruments individually through to using drum triggers or replacing hits with samples – but the good old-fashioned gate is still a first port of call for most studio and live engineers.

A loopy take on gate use

With the theory taken care of, let’s jump into some practical applications of gates. We’ll focus on in-the-box techniques here, which allows us to take advantage of one of the latest software gates in the form of Sonnox’s Oxford Drum Gate. Released last October, it’s one of the most intelligent gate effects on the market, with a different approach to what you’d commonly find on hardware or other software gates. (Sonnox tell us that it’s the fastest-selling plug-in in their history, and as a bonus, it’s available with a 50% discount until July 6th as part of the brand’s Summer Sale.) 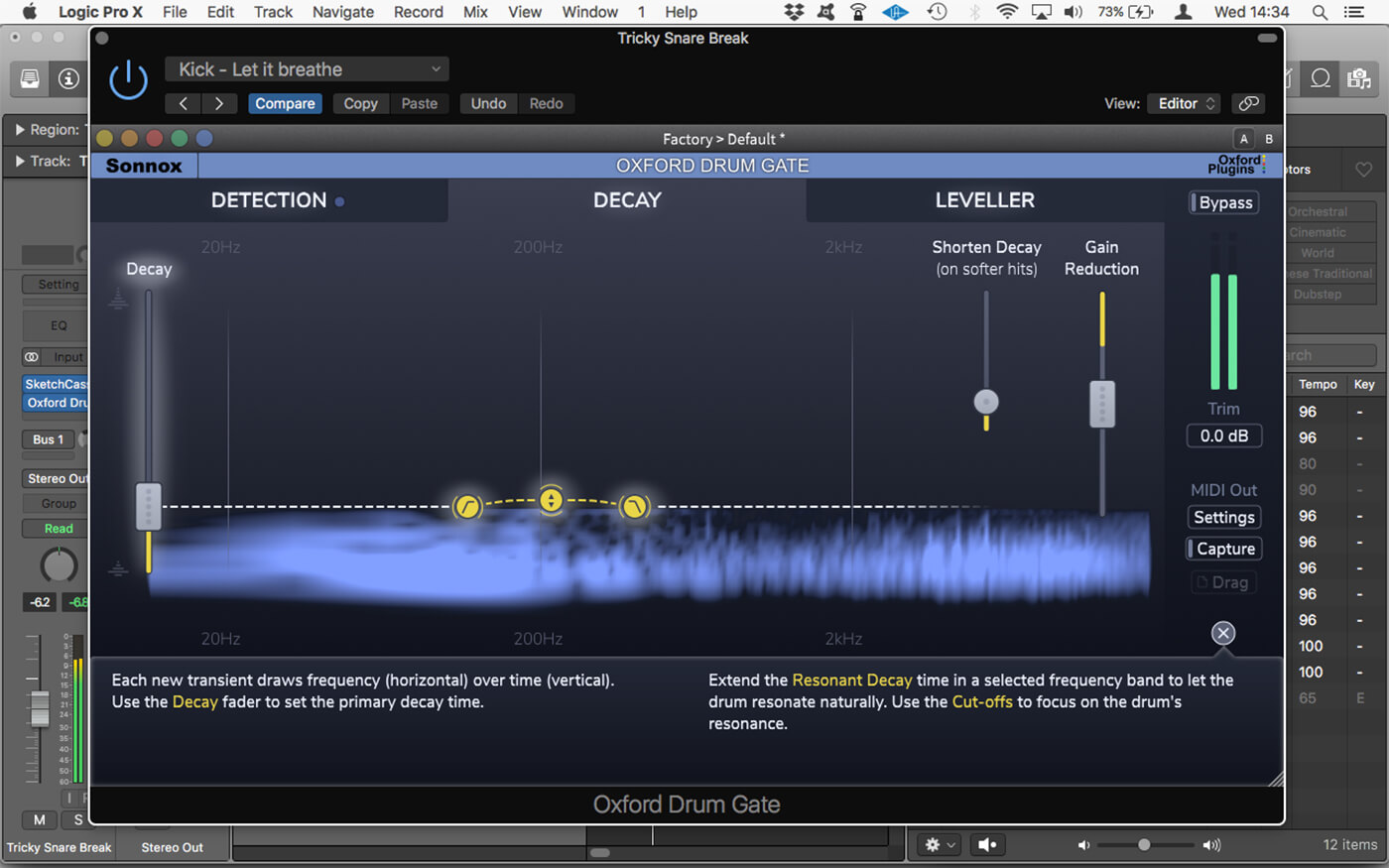 There are often ways that gates can be helpful even if you’re not recording live drums. One of the most common uses is to help clean up an existing drum recording. In our case, we’ve got a dusty drum break sampled from an old tape recording. We want to use this as the basis of a sampled groove – and it’s not a bad loop on its own – but we want a more modern sound with some extra percussion on top. Here’s our drum loop on its own:

If we add our congas, a shaker and a bassline, we can hear that things quickly get too busy:

So we have a couple of problems here: firstly there’s a lot of hiss, and secondly, the busy snare part clutters up the beat too much, meaning there isn’t really enough room for what we’re trying to add.

The main problems with traditional gates are that they can be frustratingly fiddly to set up and they’re not particularly intelligent in the way they work. Basic gates might offer literally nothing more than a threshold control, and if you’re very lucky that’s all you need for certain applications. But typically you’ll have control over a few more key parameters, such as attack and release times, and a hold setting to keep the gate open even if the signal drops below the threshold momentarily. Even if you take care with the settings, you can still encounter ’chatter’ as the gate opens and closes, or misdetection causing notes to be choked or lost entirely.

If we tried to use a traditional gate on our signal here, we’d struggle with its complexity. We can’t go back to the multi-track recording for the simple reason that we don’t have it, as is normally the case when sampling. Luckily, for our purposes of cleaning up and simplifying the signal, the Oxford Drum Gate takes a different approach, intelligently analysing your drum signal and showing visual feedback via a real-time waveform (it can work on other instruments too, but it’s primarily intended for drums). 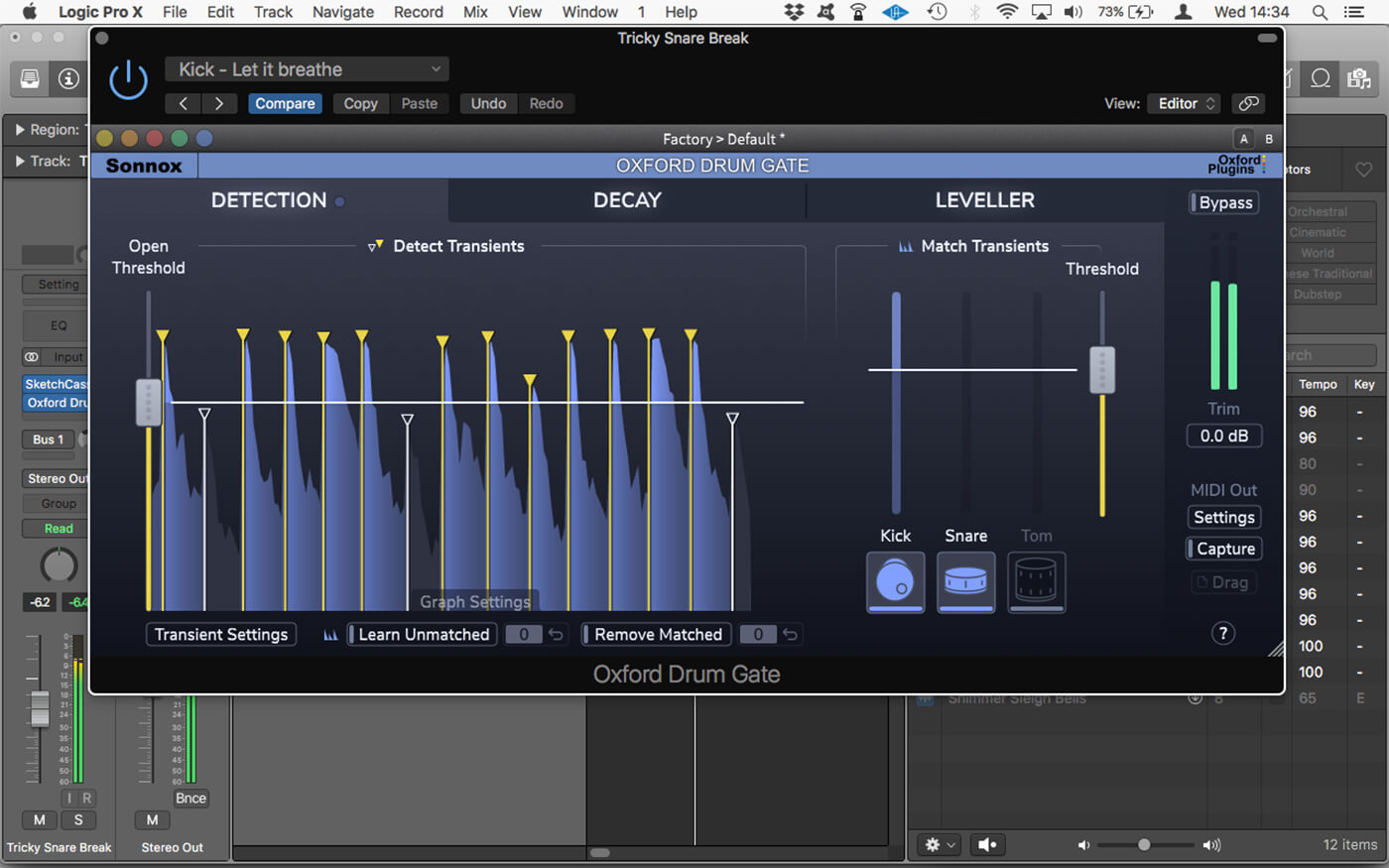 By applying Oxford Drum Gate, adjusting the threshold appropriately, the intelligent drum-hit detection works automatically. We can decide which hits we want to allow through the gate and, with a bit of tweaking, clean up our loop quite substantially. You can even select the type of drum you want the gate to listen out for.

This level of gating is quite extreme by normal standards, since we’re trying to create a more open feel to our groove while also removing all that hiss, but you can hear how transparently the Oxford Drum Gate sounds even when doing this much work:

Adding a hint of reverb smooths the gaps between the hits and reintroduces some ambience:

We can then bring back our congas, shaker and bassline to the loop in order to hear how much of an improvement we have over the hissy, cluttered original:

Beyond their most common application for cleaning up drum recordings, gates are interesting in the way they allow you to manipulate signals in unique ways. Take, for example, some of the ‘top’ loops you find in sample packs, typically with a mixture of hi-hats and percussion: most of us have thousands to choose from in our sample libraries, and they’re certainly a quick and effective way to put together a demo or add rhythmic complexity to your tracks, but they can lack personality and sometimes be too busy for your track even though they have the right kind of groove. 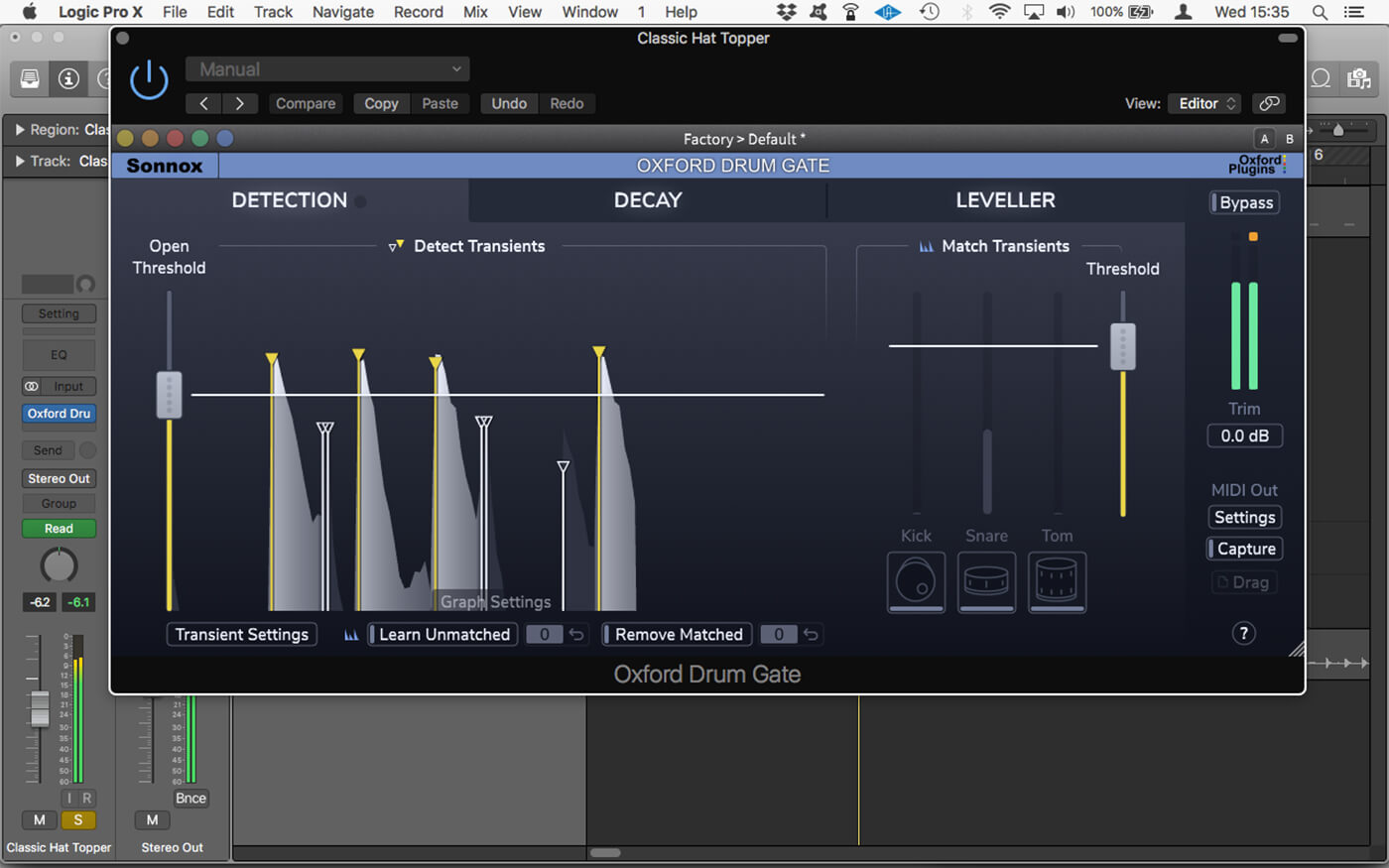 One of the really nice features of Sonnox Oxford Drum Gate is the way that it allows you to dial in different degrees of gating without harming the signal as many gates do. We can start a simple top loop:

And apply different levels of gating effects in order to create quick variations on the sound:

We can even automate the settings to create dramatic changes:

Note that gating drums like this can completely change the perceived groove and timing of even a simple loop thanks to the way hits are suppressed or muted. One of our favourite tricks is to think of a noise gate almost like a transient shaper in its own right, using it to twist and tweak the dynamics of a drum part in order to inject a slightly different energy into a groove.

For this weekend’s challenge, you have the opportunity to win a Sonnox Elite plug-in bundle and Oxford Drum Gate worth over £900.

To get involved, download the free 15-day trial of Sonnox Oxford Drum Gate and get creative with it. Then post your creations in the MusicTech Creator Community Facebook Group, before 23.59 BST on Sunday 5 July.

Drums are the obvious application here, and we encourage you to try out the techniques we’ve shown above, but we also want to hear what else you can think of. Whether it’s removing spill from drum tracks, or something far more inventive, get involved for a chance to win.