How to capture live drums with Studio One

Learn how to lay down a rhythmic foundation for your Studio One projects by capturing live drums – even if you’ve only a few mics to hand. 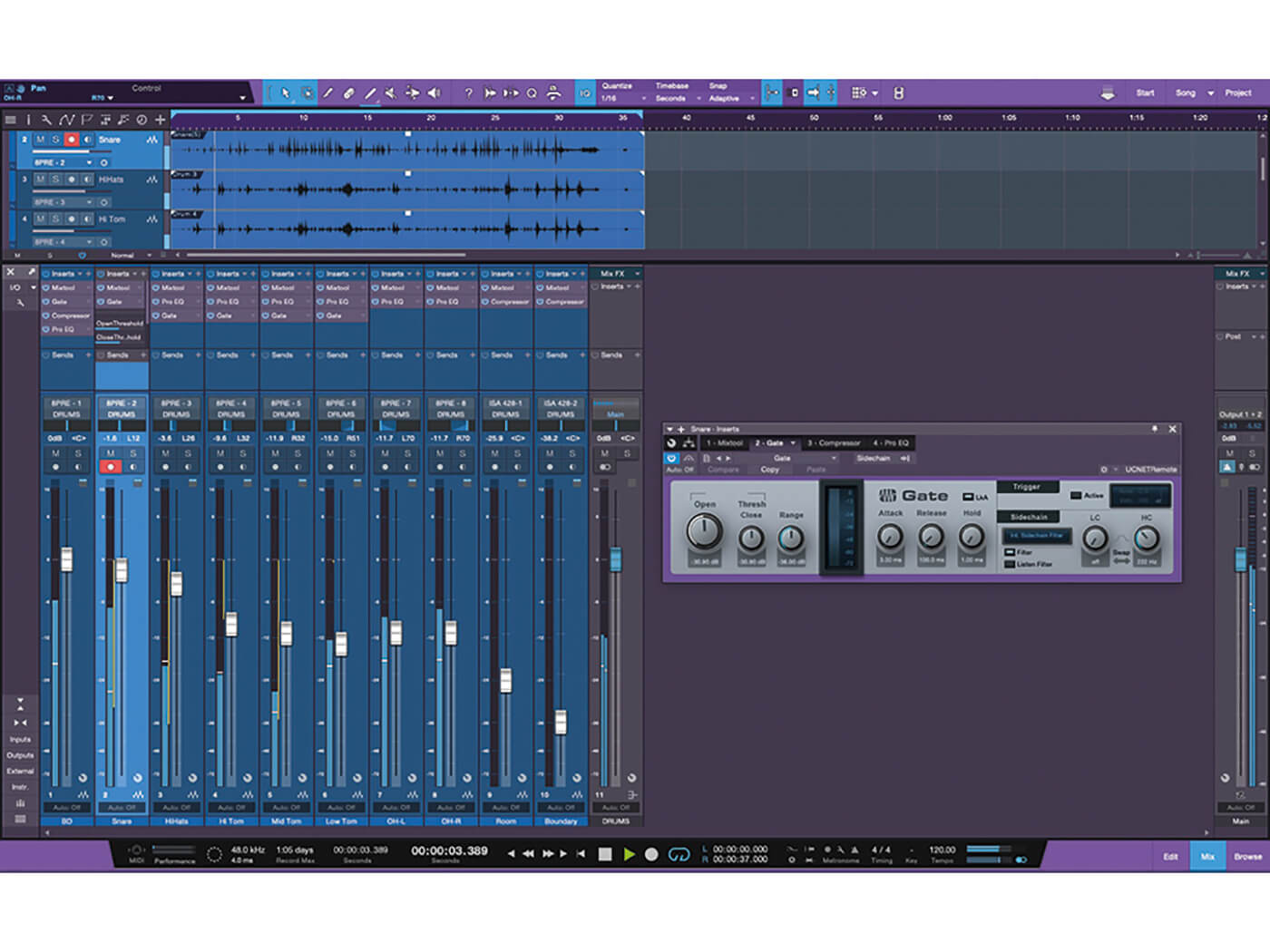 Our workshop on how to use Studio One as the bedrock of your recording continues this month, as we tackle what is one of the most interesting and challenging instruments to capture: live drums. With many of our readers recording in a bedroom or a small home studio space with a limited microphone selection, we’re looking at drum recording techniques using one, two, three and four microphones, as well as more robust setups. Before placing your first mic, however, ensure that your kit is properly tuned. This will go a long way towards helping you capture a brilliant sound, even if your mics leave a lot to be desired.

Even if you’re equipped with only a single microphone, you can still capture a full and punchy drum kit with some skilled placement. For example, a dynamic mic set up behind the drummer, one or two metres above their head, angled towards the kick drum will yield excellent results. Alternatively, try placing a mic one or two metres in front of the kit, aimed slightly above the kick drum. For a tighter sound, move the mic closer to the kit.

With condenser mics, be sure to turn on the pad if the signal begins to distort. With a condenser, you’ll want to bring the microphone closer, so that it’s about six to 12 inches above the kick drum. Make sure the microphone isn’t directly above the snare though. If your condenser mic has multiple patterns, set it to omnidirectional, which will ensure good coverage of the whole kit.

If you want a more focused and present kick drum, consider placing a second microphone either in front of the kick or aimed at the beater head. Be sure to check the phase relationship between both mics. If the sound becomes thin when you add the second mic, try flipping the polarity on one of the two inputs manually (or from within Studio One). Choose whichever setting results in the most satisfying and full sound.

You can also record the drum kit in stereo. Place the microphones over the left and right sides of the kit, with the left mic above the floor tom and the right mic above the hi-hats. There are man configurations but just be sure that the mics are equal distance from the snare, to help minimise phase issues between them.

For more punch, add a third mic to the overhead duos. With your two mono mics above the kit, add another mic to the capture the kick drum. Try recording the kick with and without the resonant head. Move the mic closer to and farther from the beater head until you find a sound you like. Another trick for wrangling increased low frequencies on kick-drum recordings is to build a tunnel in front of the kick drum using duvets and mic stands. This should prevent low frequencies from escaping and direct them towards your mic. Play around. Don’t be afraid to experiment in search of the sound you want.

Engineer and producer Glyn Johns worked with the likes of The Rolling Stones, The Clash and Led Zeppelin, and has his own technique for capturing drums. He would place one condenser mic above the snare and kick drum, pointing straight down and panned right, and another condenser above the floor tom, pointing towards the hi-hats and panned left. He added a kick drum mic and a snare mic to the mix as required (when placing a snare mic, make sure that its point of greatest rejection is aimed toward the hi-hats). This method made for fantastic results and is easily achieved for amateur and home-based recording artists. Just be mindful of the sound of the room and, more specifically, the drum placement within the room. Check the phase coherency between each pair of mics to ensure the best sound.

Each microphone you add to a recording setup provides more opportunity for spot drum treatment – and for phase cancellation issues. However, if you have additional microphones (and inputs on your interface), there are many more techniques you can indulge in.

Adding another microphone a few metres away from the kit will provide much more room tone, which can be blended in to taste. Another seemingly counter-intuitive trick includes pointing a simple dynamic mic such as a Shure SM57 away from the kit and facing a wall, about 1mm away from it. Add some heavy compression to the mic and blend it with your other drums and, depending on your mix, you may just have some winning results.

There are endless quirky techniques you could try: adding a small-diaphragm condenser to your hi-hats can give you additional control; a large-diaphragm condenser at a 45° angle over the skins of your toms will give you more low-mids; and a small condenser placed inside a biscuit tin can lead to unusual elements that you could blend in during choruses or interludes. Be creative and have fun. The possibilities are endless. 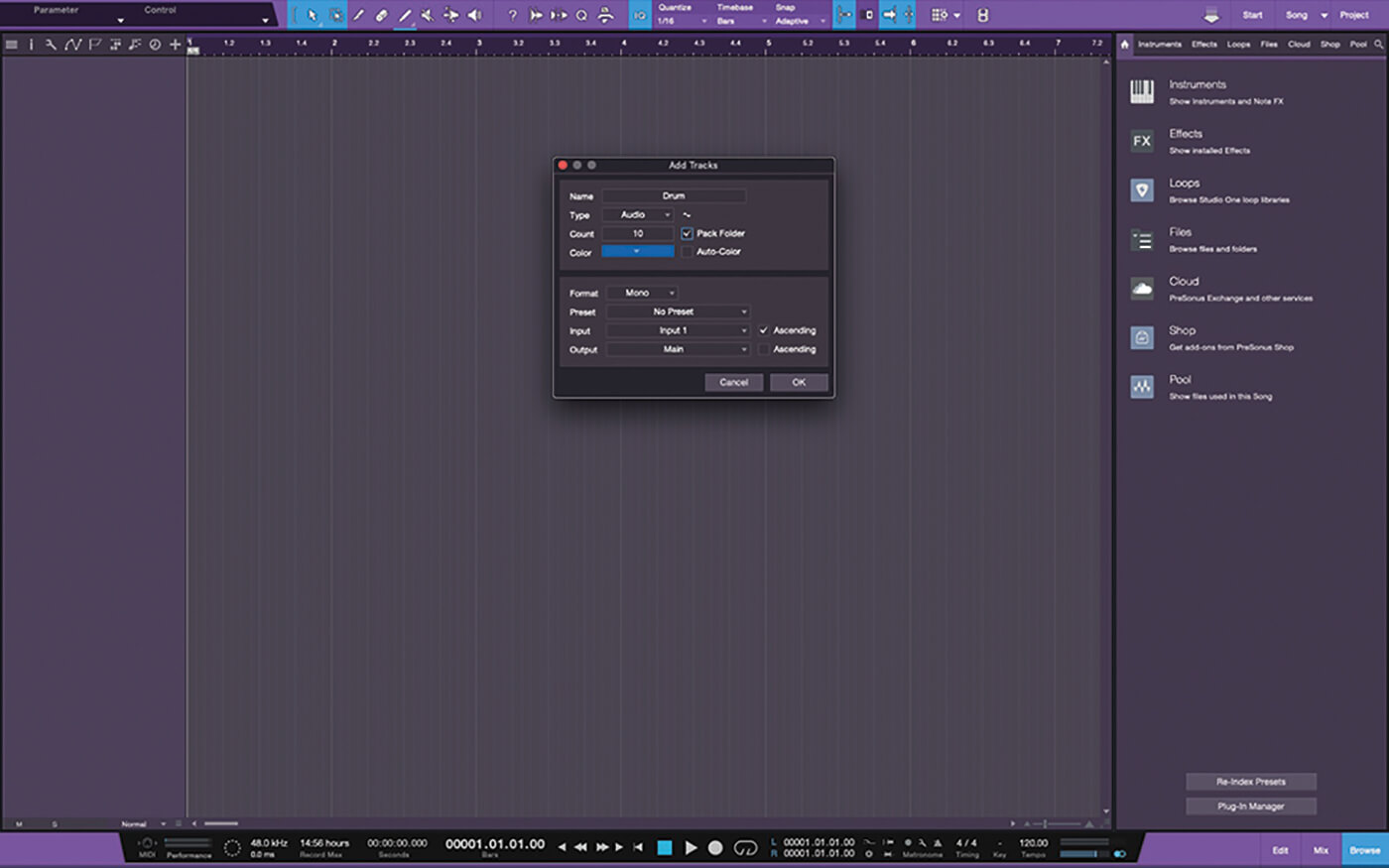 1. Open Studio One and create (T) as many audio tracks as you have drum mics. Click Pack Folder to put your tracks in a Folder track. 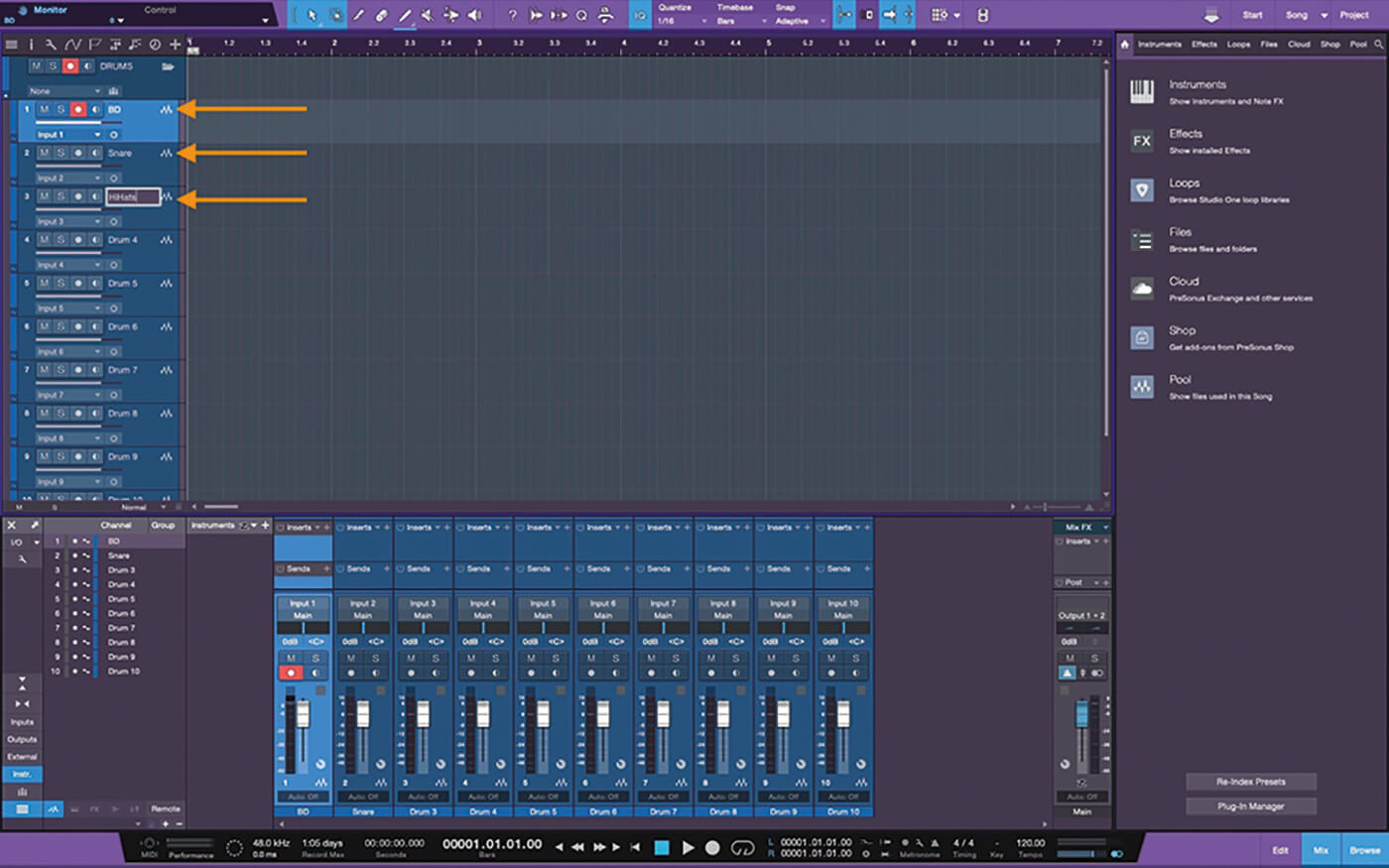 2. Rename each of the tracks (kick, snare, etc), colour them, and select the inputs for each. Have the drummer play and adjust the gain for each mic. 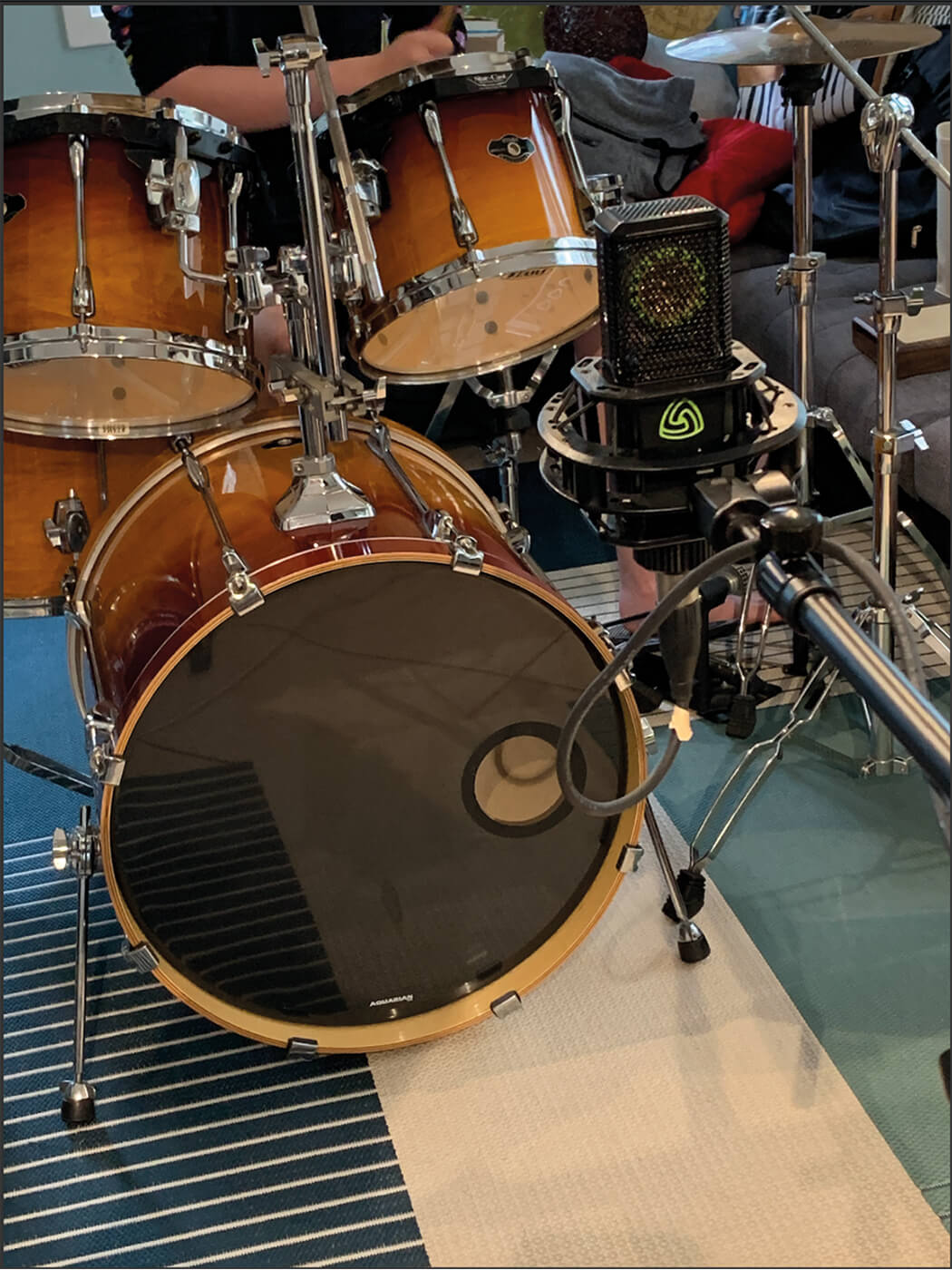 3. If you’re using one microphone, place it in front of the kit (or above the drummer’s head) and move it around to see if you can capture a nice balance its elements. 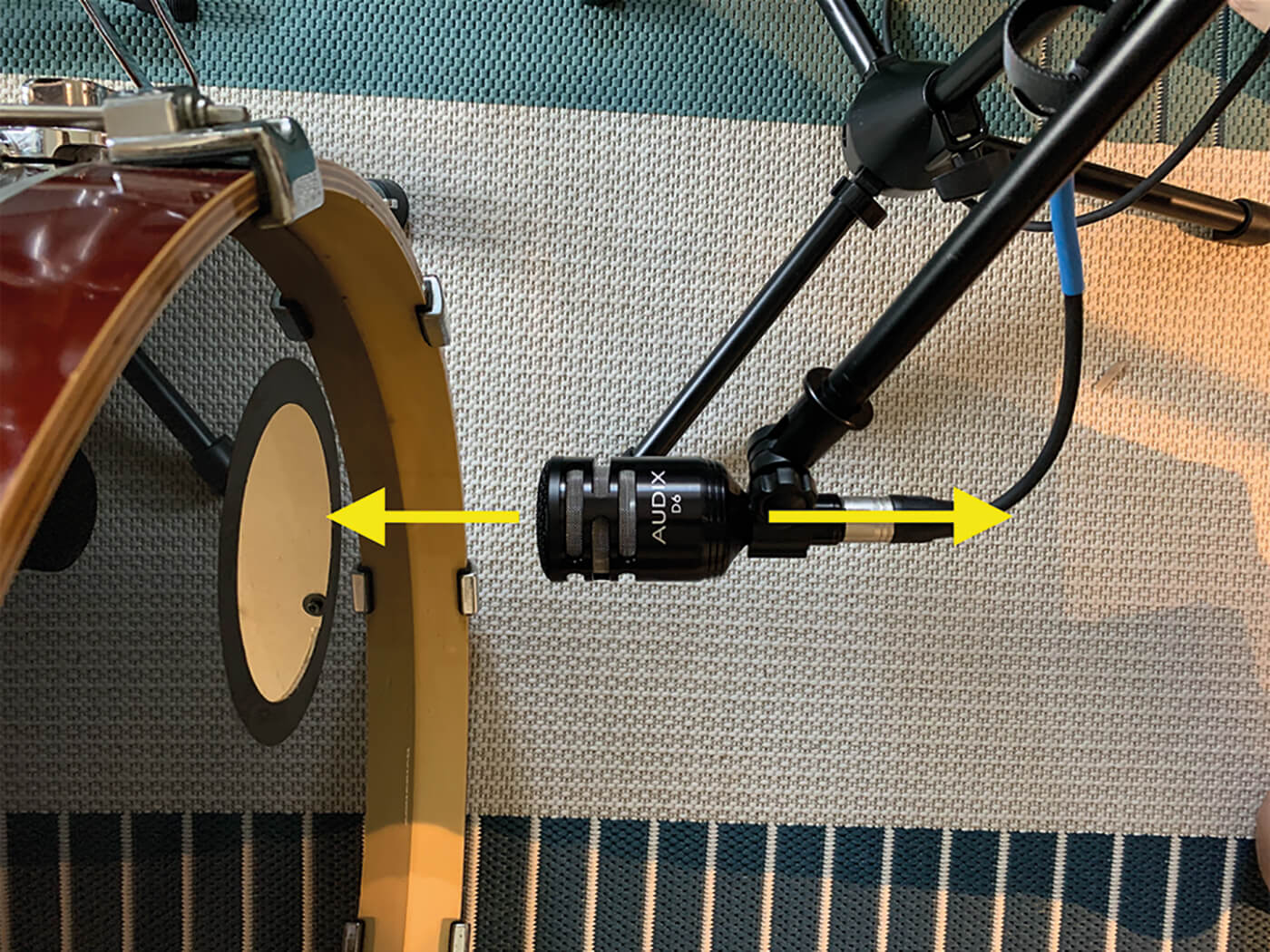 4. If you’re using two mics, place one above the kit and use the other to capture the kick drum. Move the kick mic closer to the bass drum shell to adjust the tone. 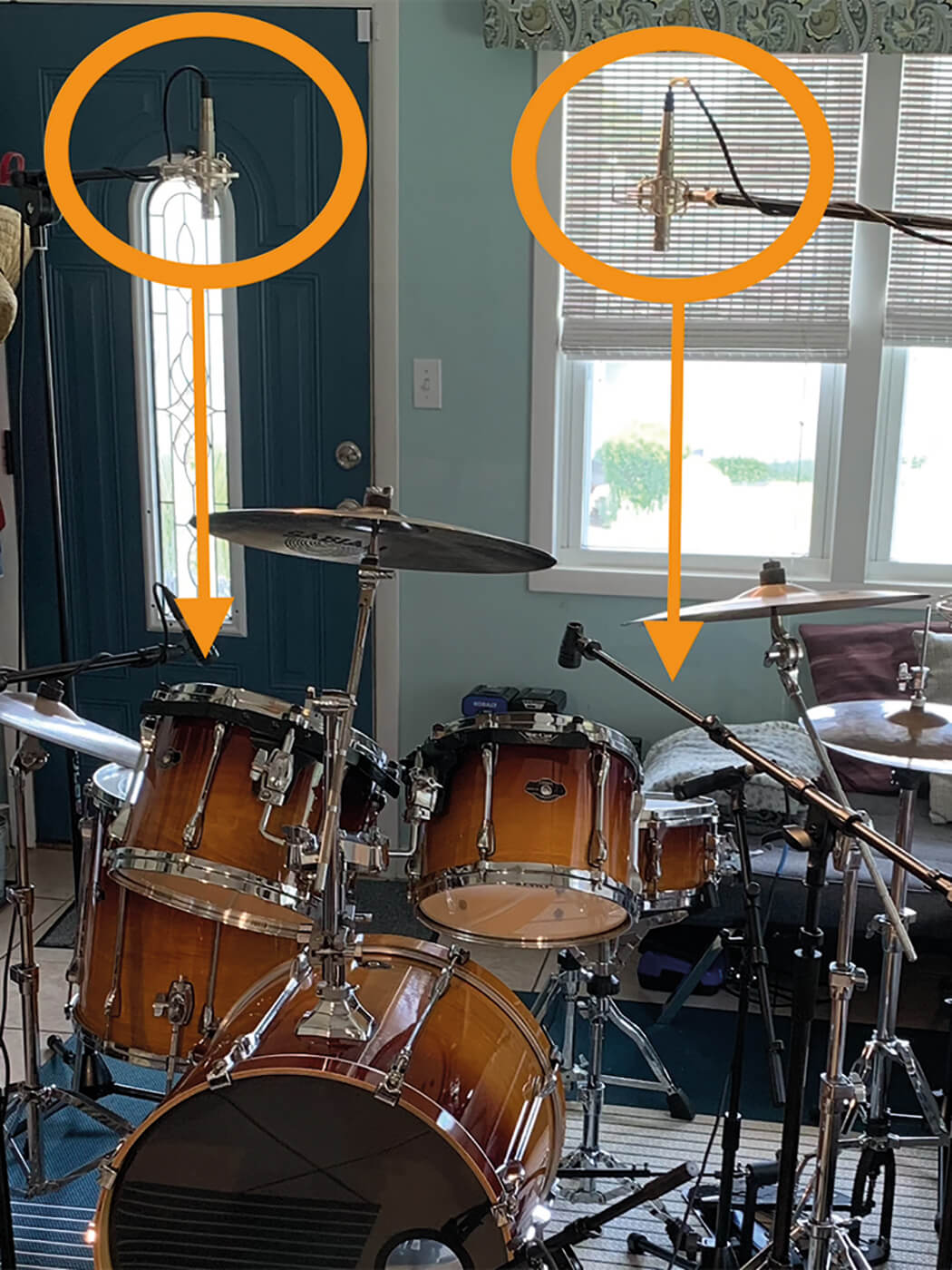 5. Try spacing your mics apart and see if you can capture a decent stereo image of the drum kit. Once placed, adjust the panning for those tracks in Studio One. 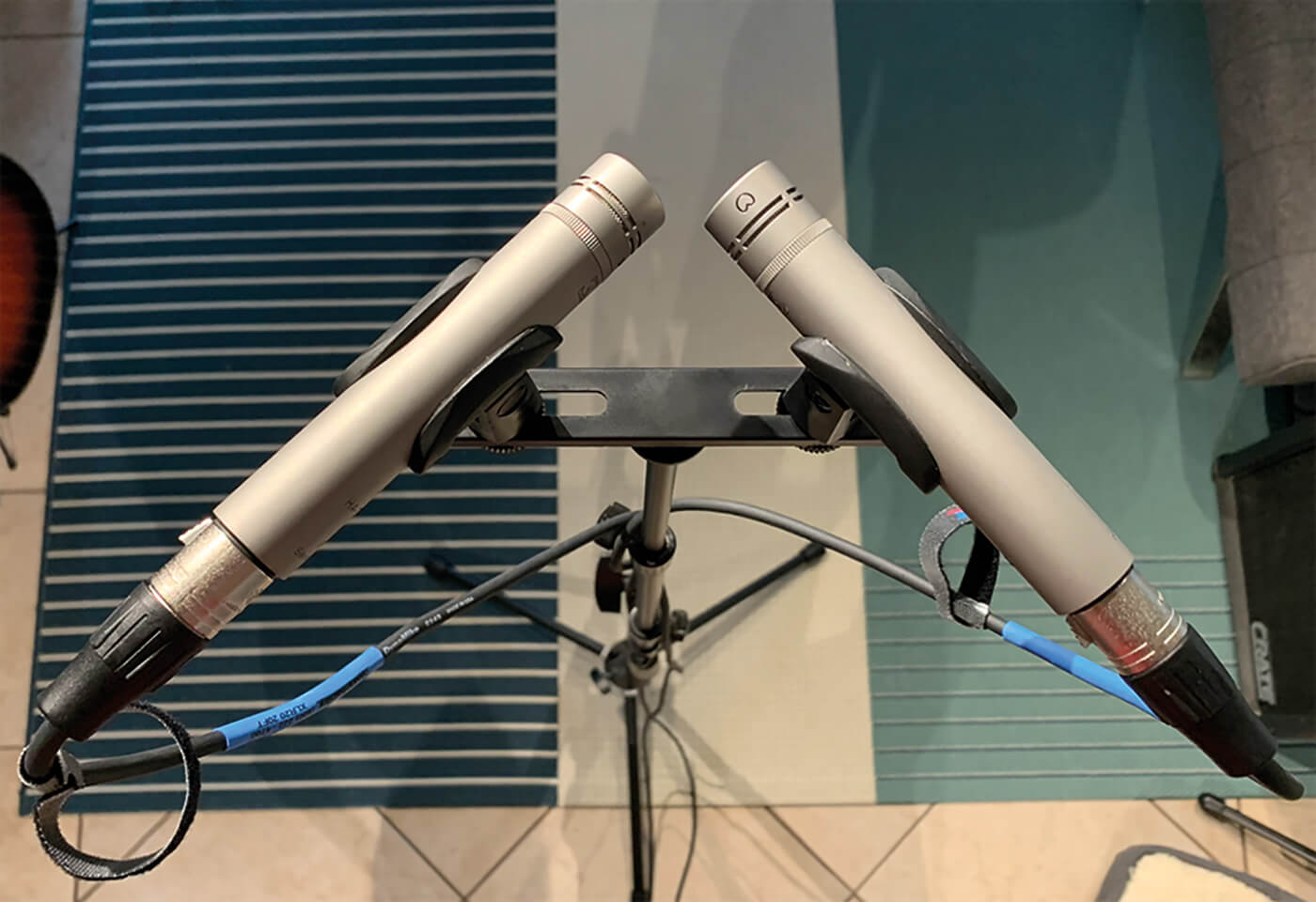 6. If you have three mics, set a pair as an X/Y in front of the kit, then add a kick drum mic. This will minimise issues with phase cancellation and can give you an excellent overall sound.

SONG STYLES – COUNTRY, JAZZ, FOLK The style of your song should dictate the way you record your drums. Jazz, traditional country and folk work better with roomier sounds. In these styles of music, it’s common to record the drums and other instruments in the same room as the singers. In this case, it’s more important to use blankets, duvets, gobos or anything else you have to hand to separate as much of the drum kit as possible from the rest of the instruments. 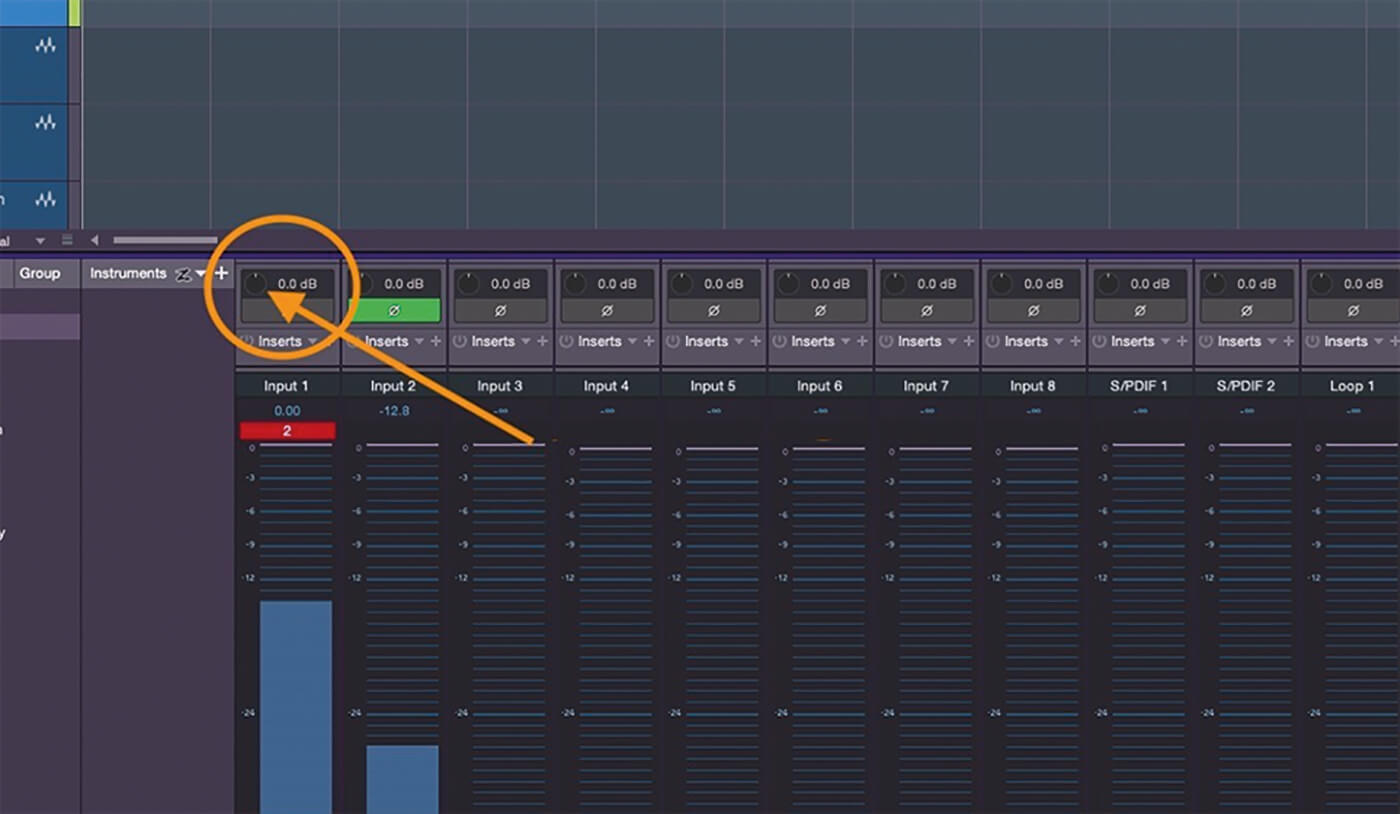 7. As you add mics and move them around the kit, use the gain dials in the input section of Studio One to adjust input levels so that nothing is peaking. 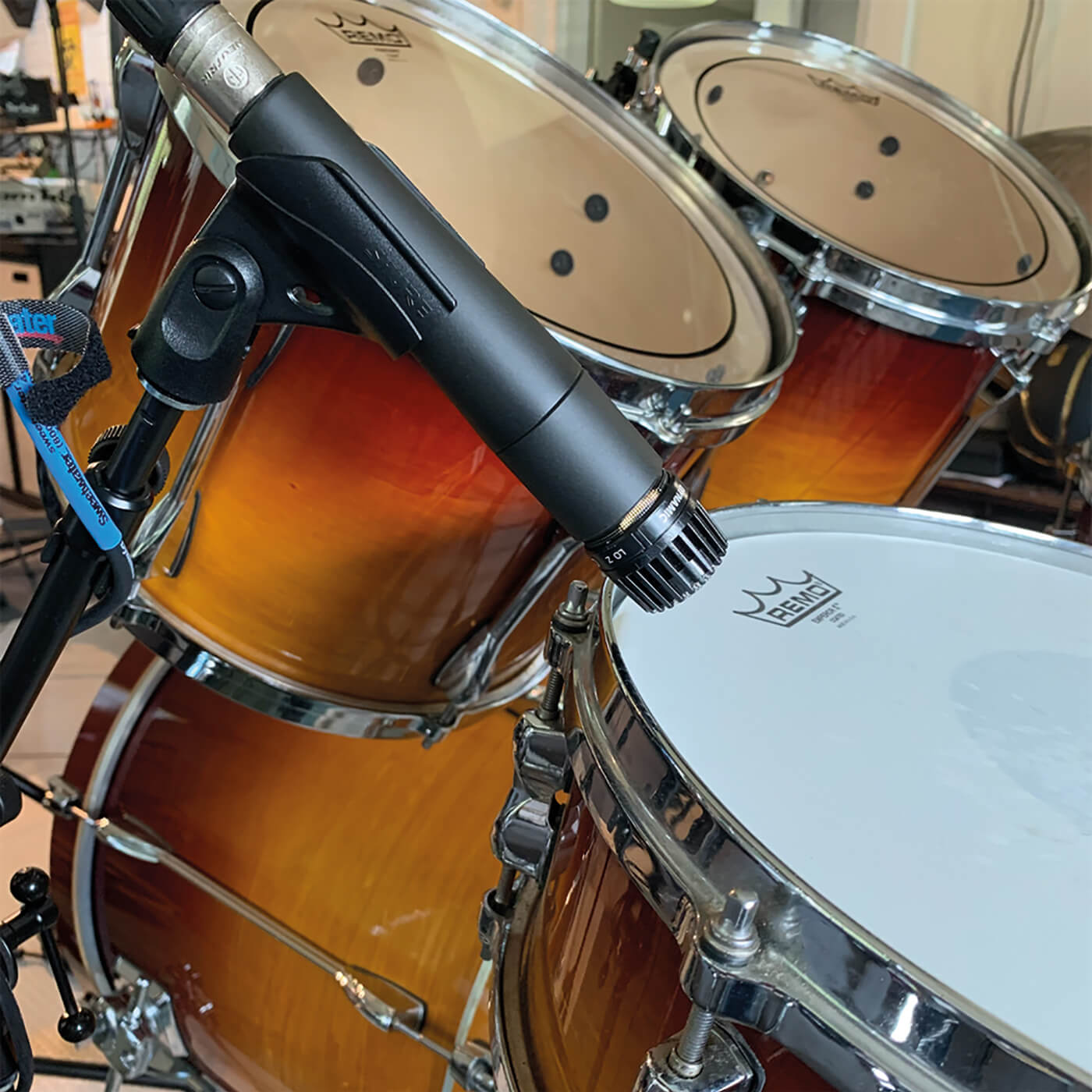 8. Add your snare mic, if possible. Place it above the rim of the snare, angled down at the skin. Start with a 45° angle and adjust to taste. 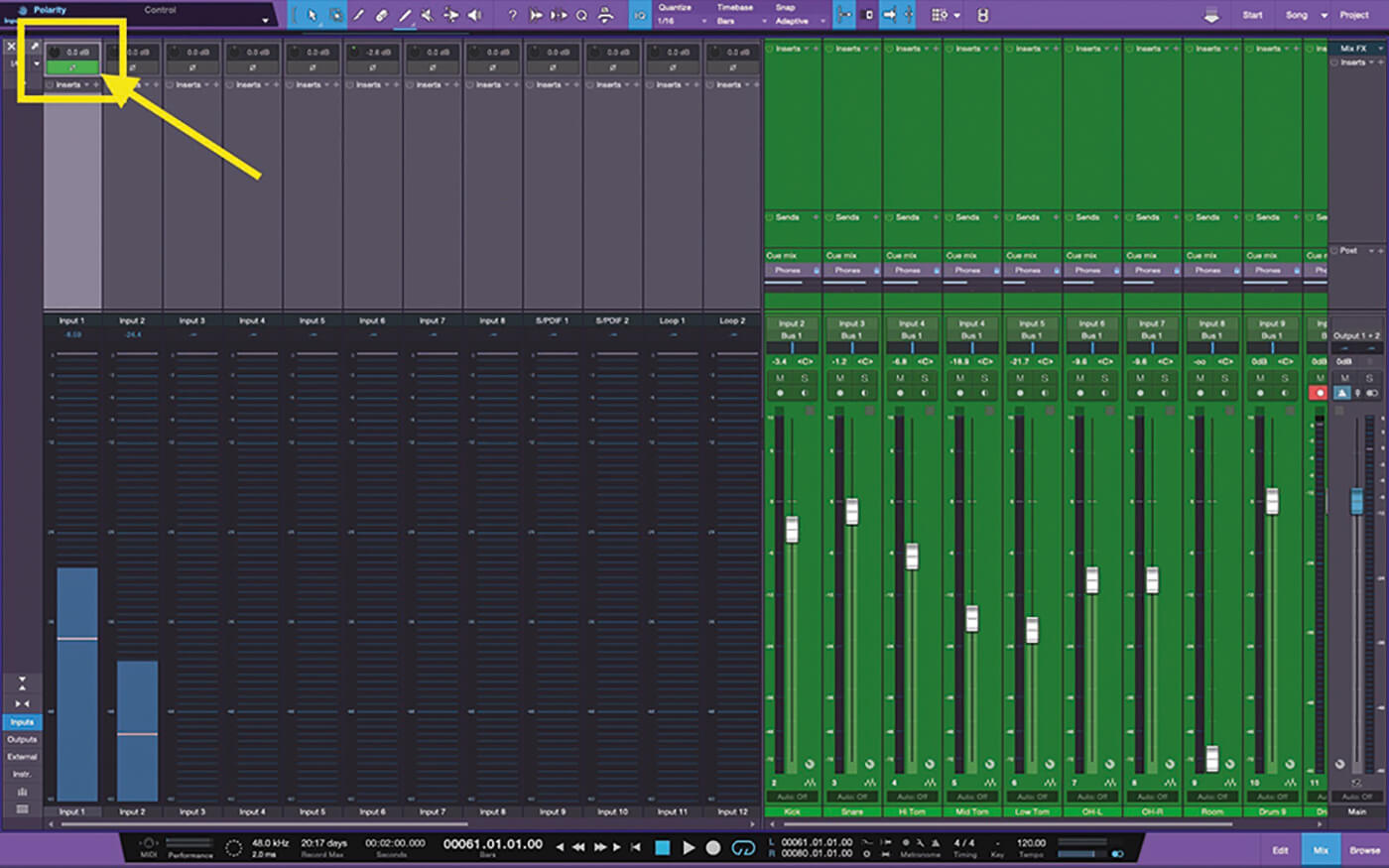 9. Listen as you bring each track’s volume up. Did the overall sound of the kit get thinner? Click the polarity button for each mic you add and see if it sounds better. 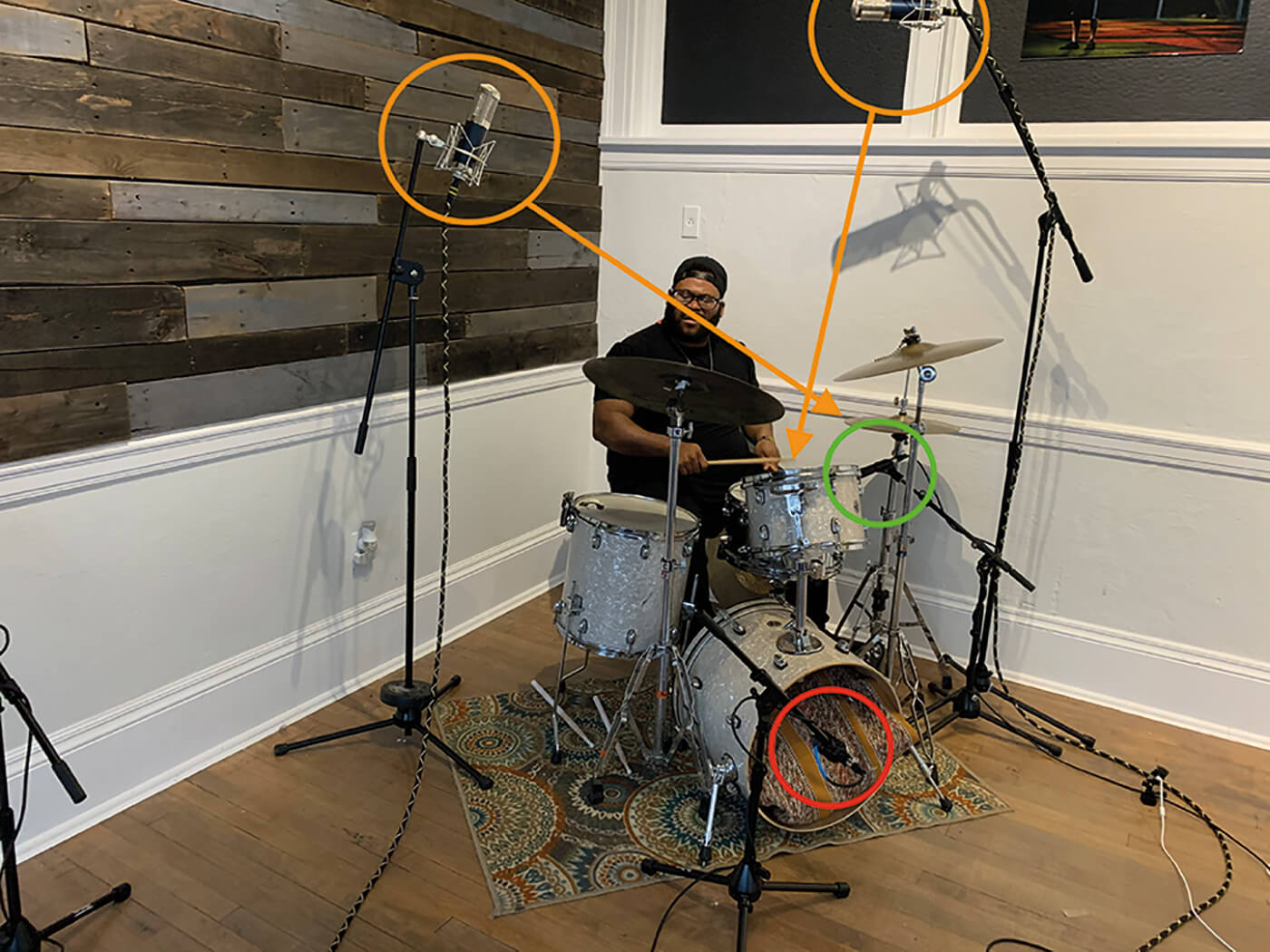 10. This four-mic setup is a modified version of the Glyn Johns method, with two overheads, a kick and a snare mic. Place the overheads higher for a roomier tone. 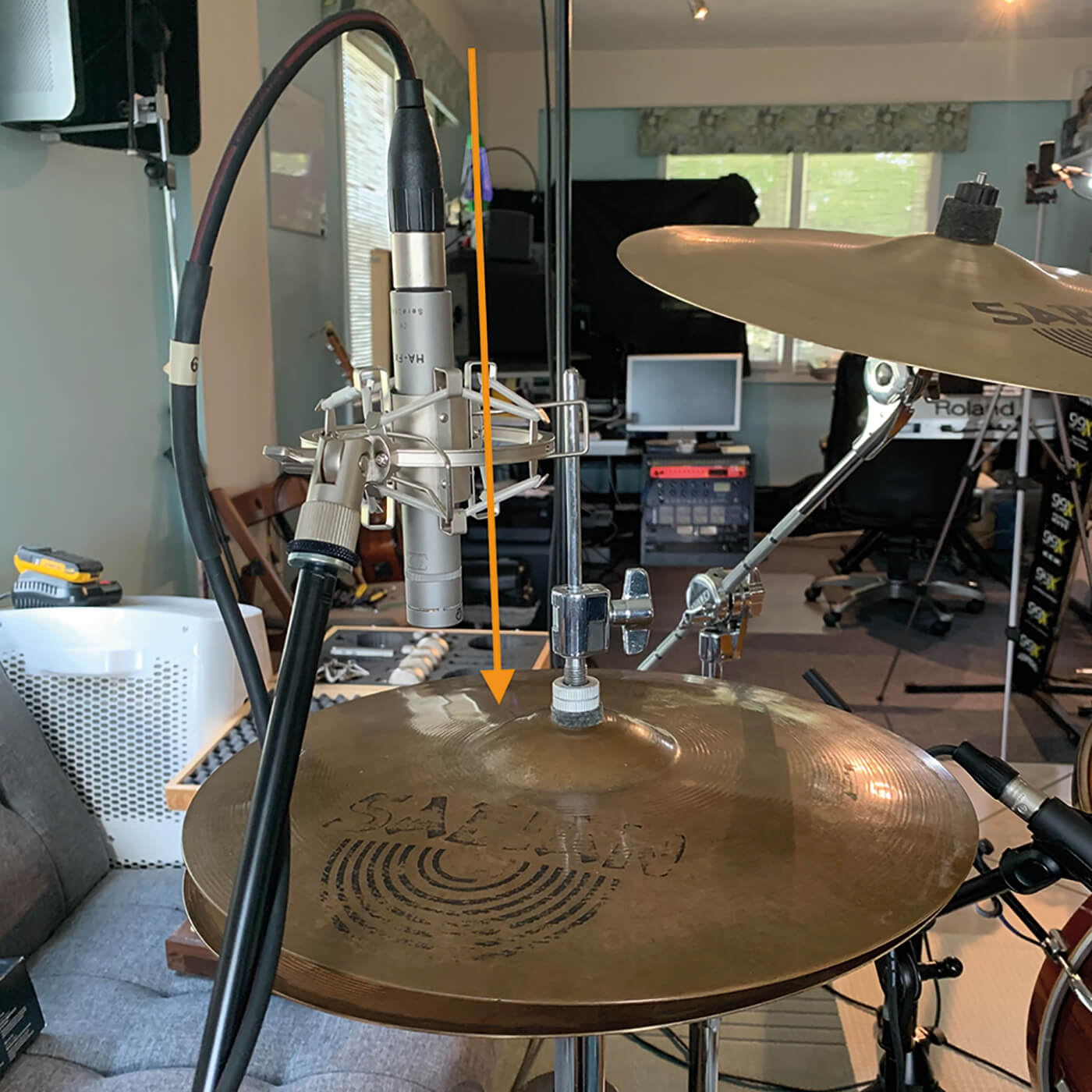 11. If you’re spot-mic’ing the hi-hats, use a cardioid or hypercardioid mic placed two to four inches above the hi-hats, and angled slightly away from the snare drum to reduce spill. 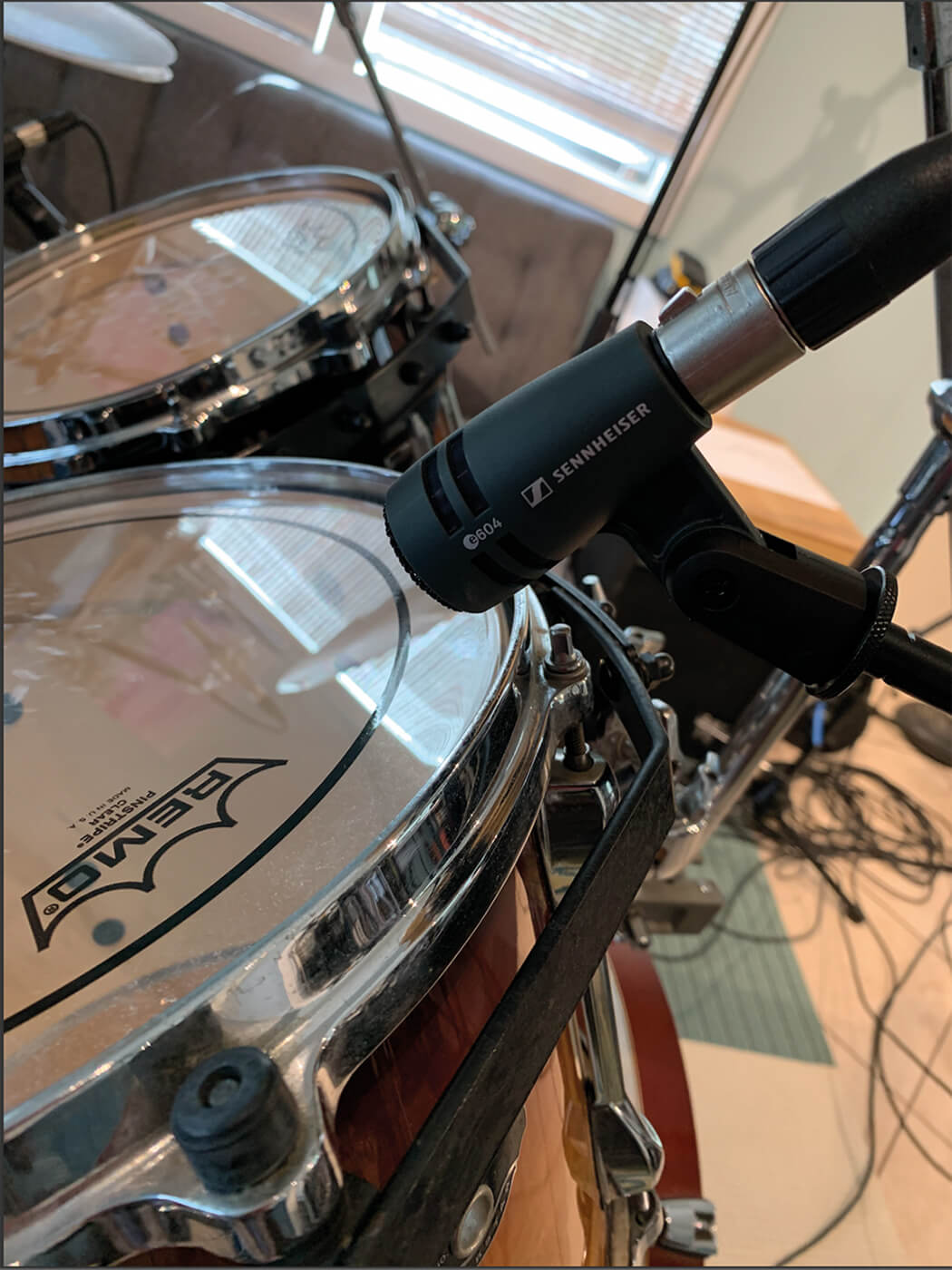 12. Use the same principle used on the snare to mic the toms. Place the mic above the rim, at an angle of about 45°, and adjust to taste. Try using a condenser.

SONG STYLES – ROCK, POP, NEW COUNTRY More contemporary styles of music require much more separation (and processing) to achieve the right drum sounds. If recording in your house, set up the drum kit in another part of the house that’s as far away as possible from other instruments. Don’t forget to set up a headphone send with a click for the drummer, so they can hear the rest of the bank and to make editing easier later on. 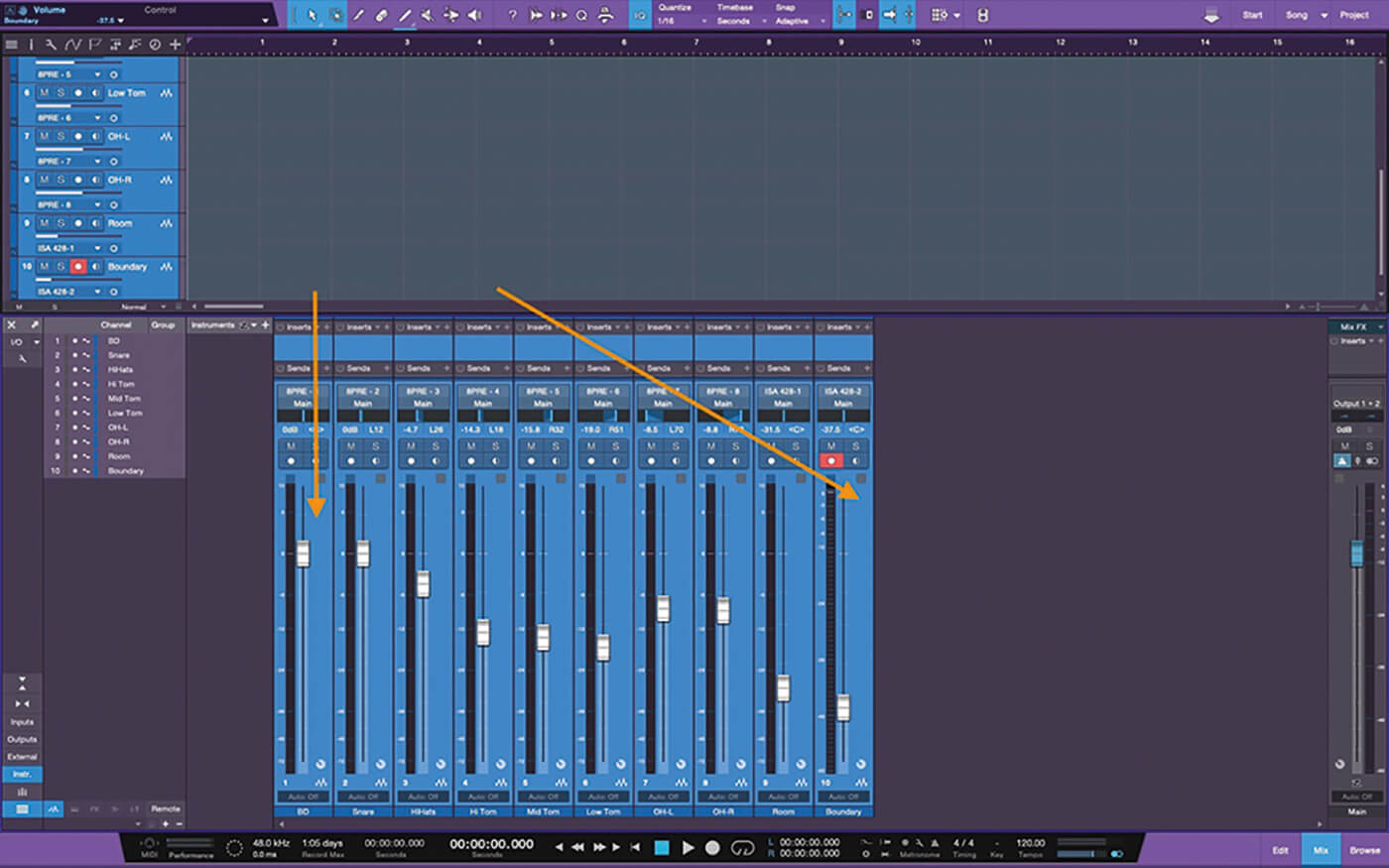 13. Once all your mic levels have been adjusted, set up a bus for all the drums. This won’t come into play until you begin mixing but it’s good housekeeping nonetheless. 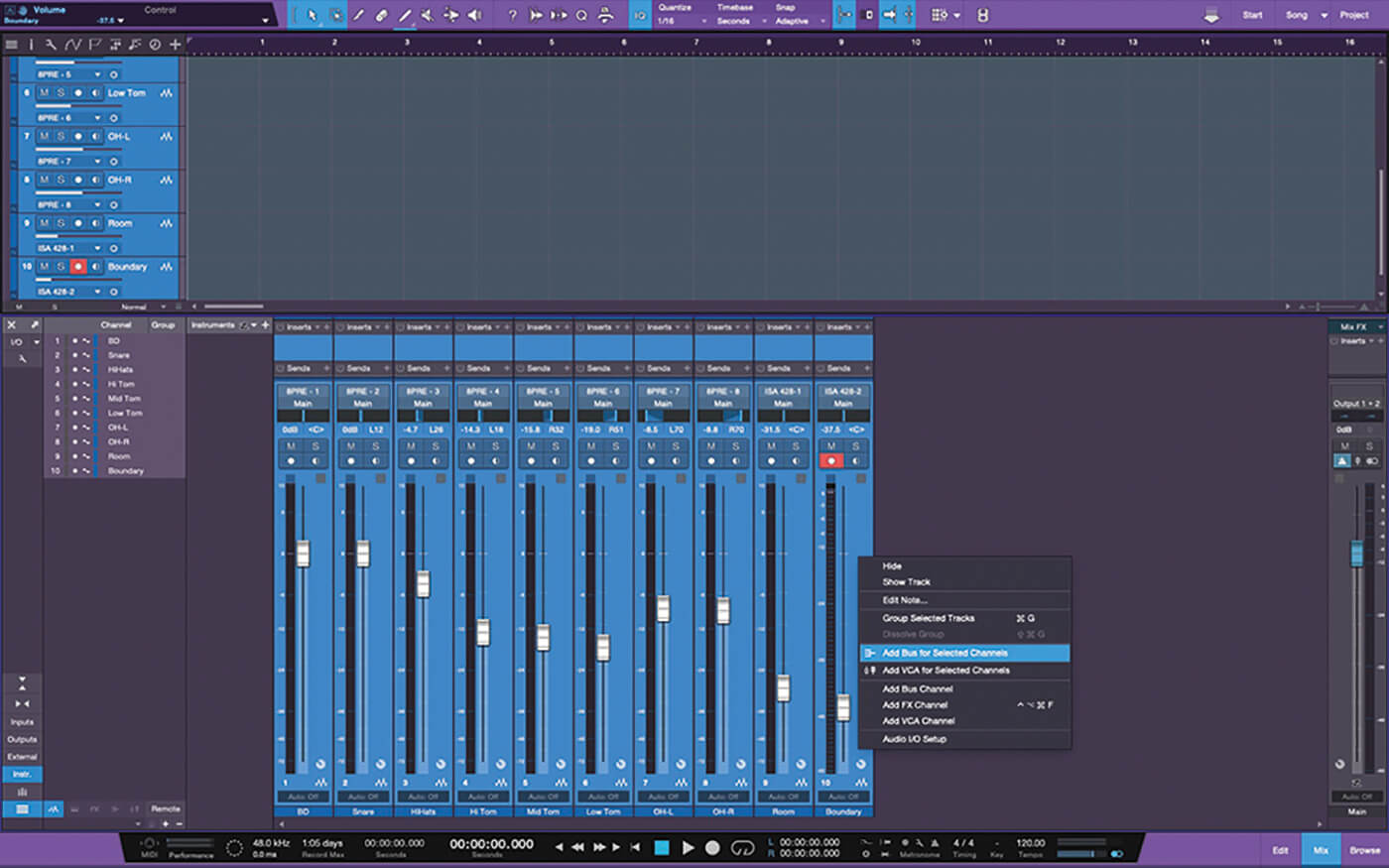 14. Select all the tracks. Right-click on one of them and select Add bus for selected tracks from the context menu. This will create a bus and route all the drum tracks to it. 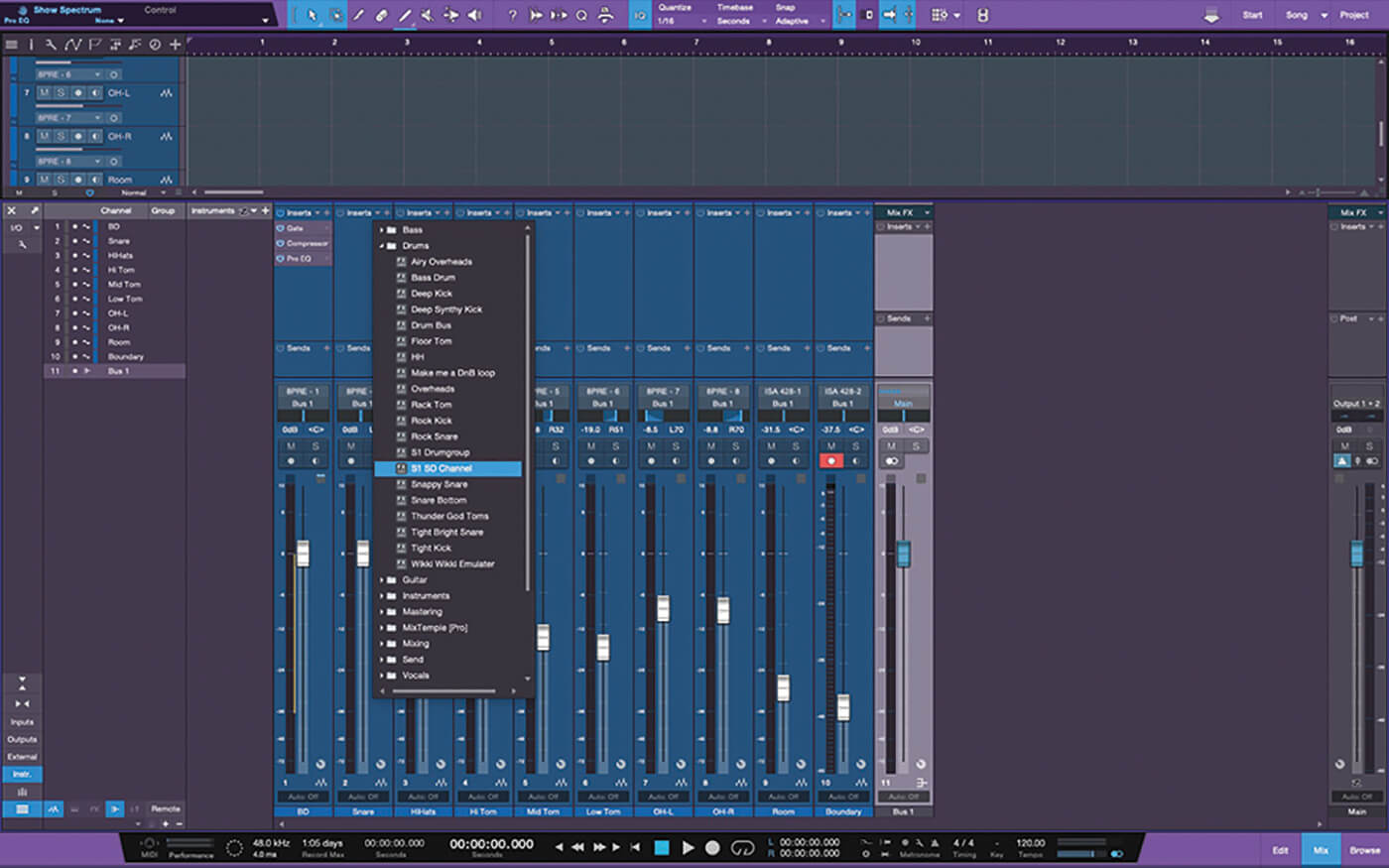 15. Although effects aren’t necessary at this stage, it’s fun to experiment to see what sounds you can get from your drums. Why not dabble with Studio One’s presets to see what’s what? 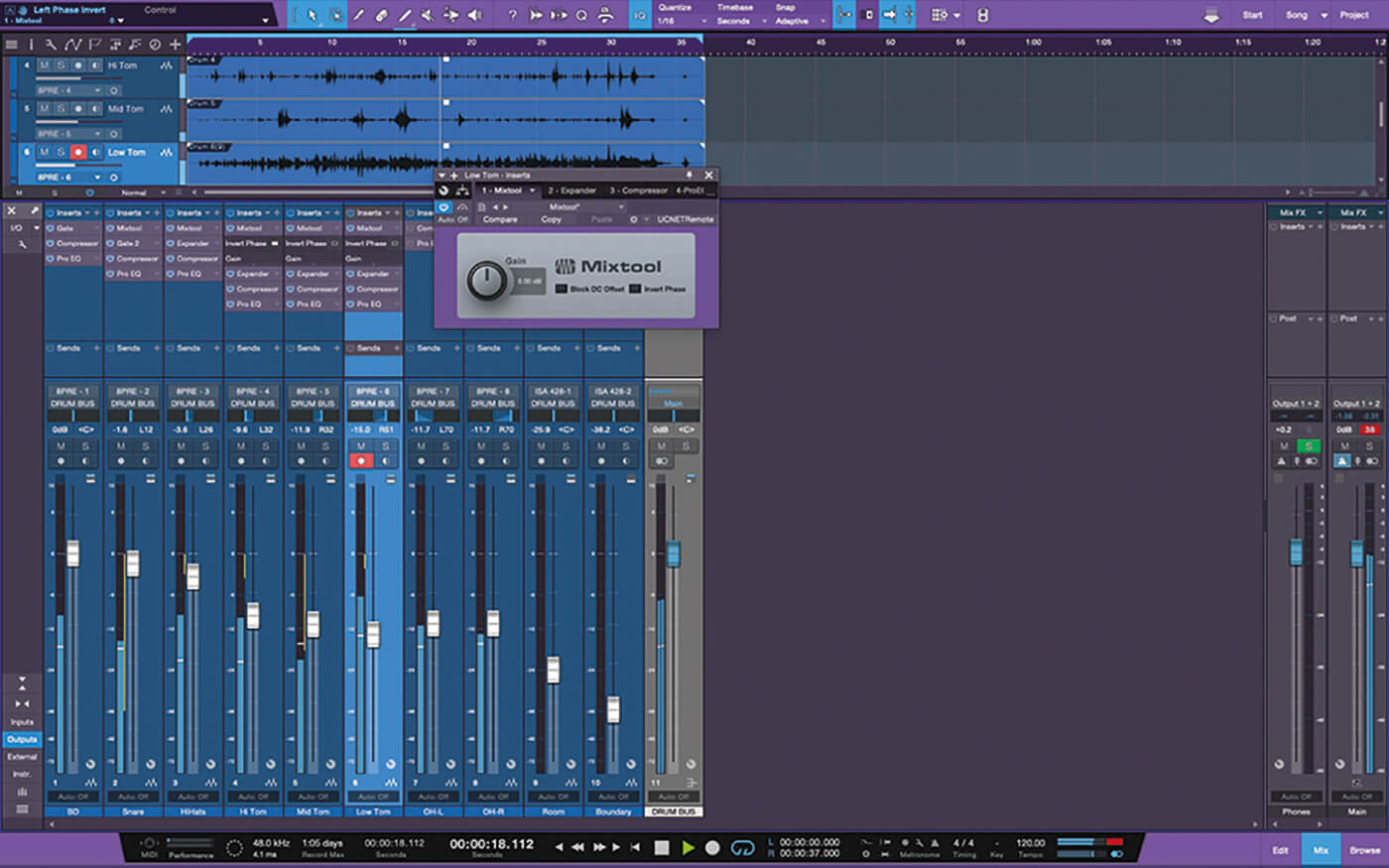 16. Add a Mixtool to each track, which will allow you to reverse the polarity of the tracks after recording, should there be any issues during the mixing stage. 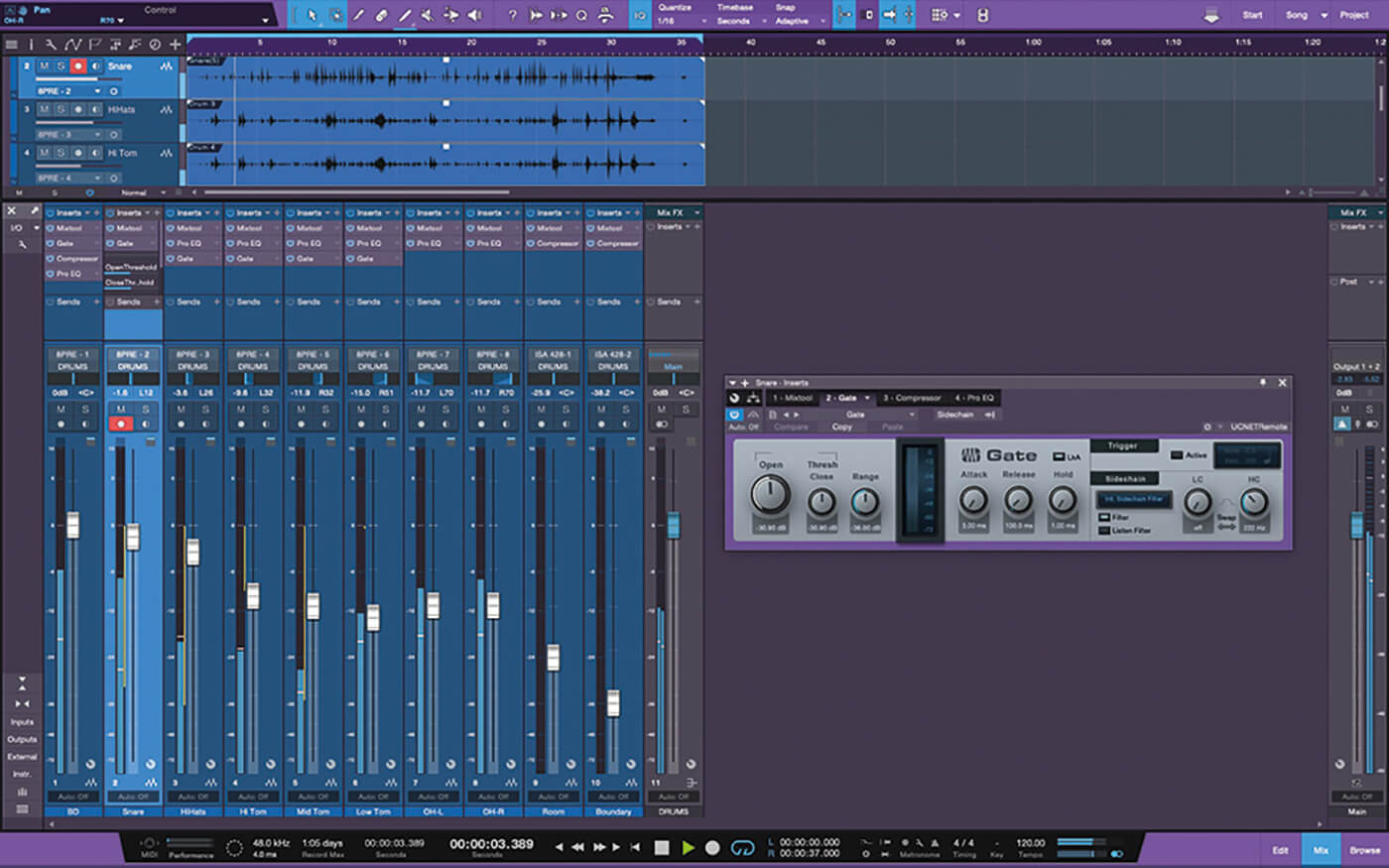 17. The noise gate is a common tool for tightening up drums, particularly on snares. Adjust the threshold and range of the gate to get a tighter sound from it, with less bleed from the other mics. 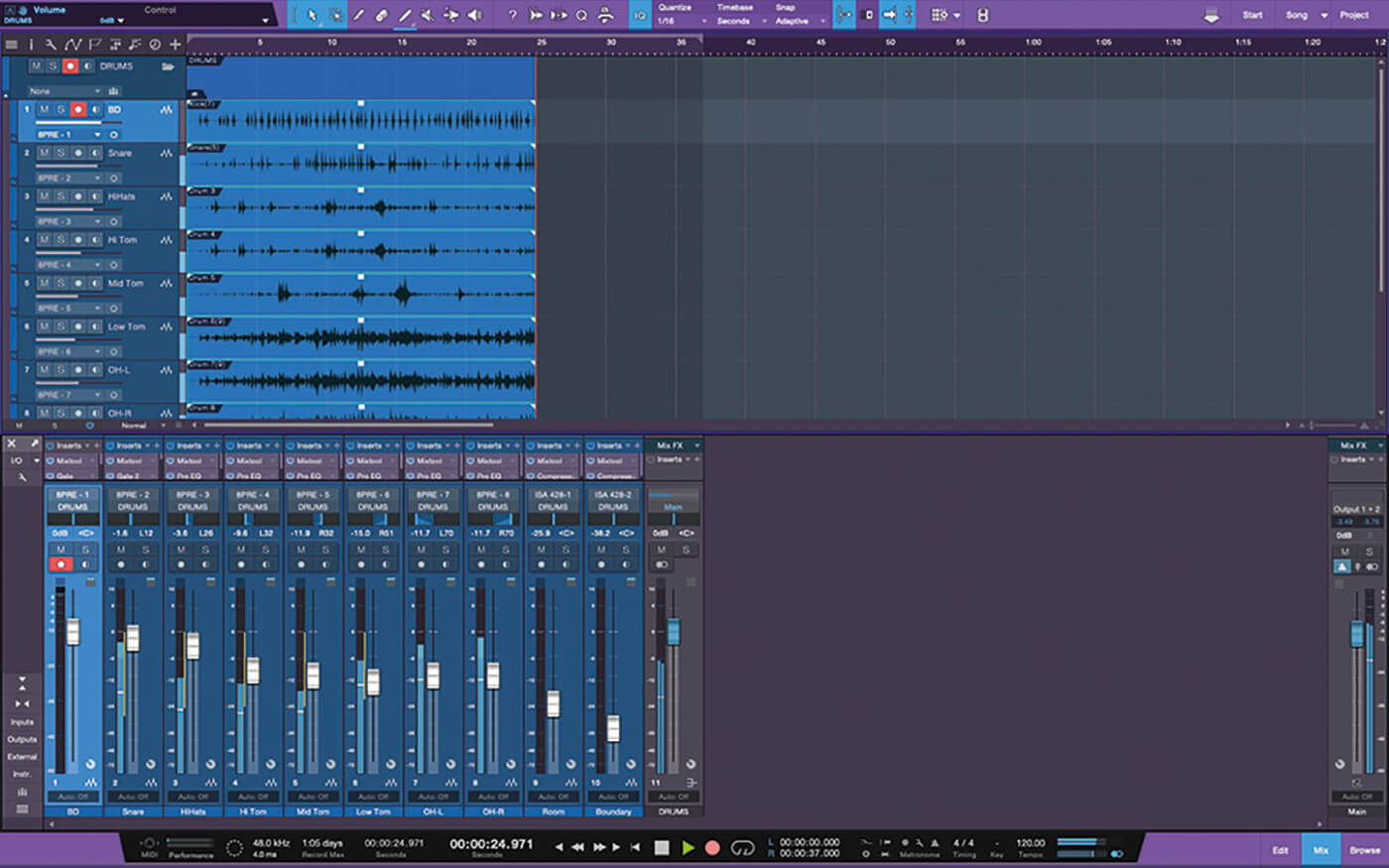 18. Have the drummer play, and do a test record, so you can listen back for any trouble spots. Once you know you have a nice balanced kit, go for the real takes.