Sound design with Grain in Reason 10 (Part One)

In this episode of our Reason sound-design series, we begin grappling with Grain, a granular synth with lots of sonic clout that debuted in Reason 10… 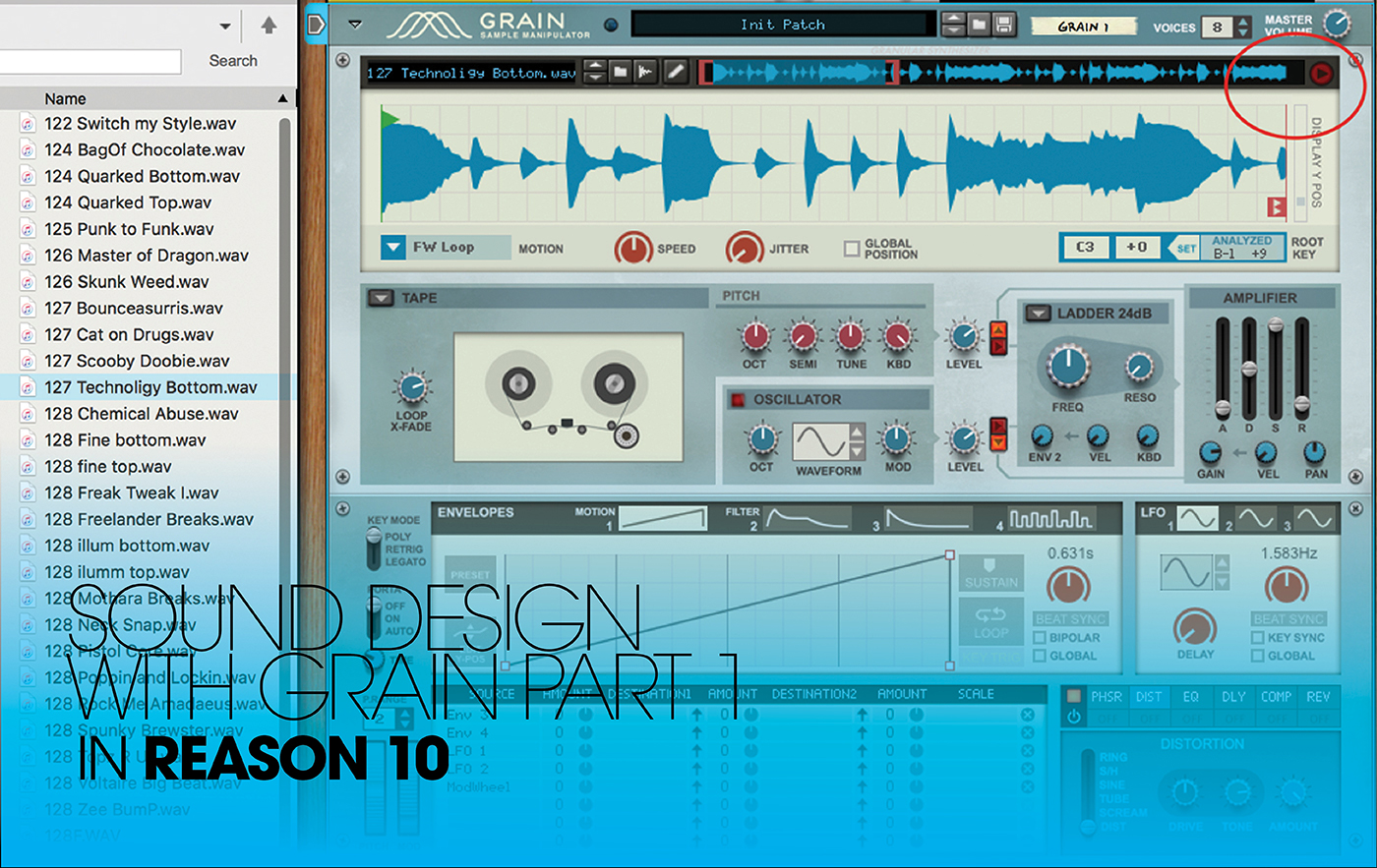 Recent updates to Reason have made headlines for all sorts of, er, reasons. The VST compatibility was the big news in Reason 9.5, while Reason 10 had all of the content, with two additional synths, instruments, rack extensions and sample content.

The truth is, though, it was arguably Europa that stole the headlines with R10. This EDM-based synth more or less elbowed the others out of the way, walking onto the stage of publicity and saying: “Listen to my massive presets.” In fact, it did so well at this that Propellerhead Software ended up releasing it on its own, so other DAW users could see what the fuss is about.

However, the other of the two new synths, Grain, also deserves some praise and is the focus of this latest sound-design workshop in our Reason series. While Europa has just as much to offer for sound designers, Grain lets you get to the heart of sampling and synthesis, straight away.

Granular synthesis seems to have come back in vogue at the moment; only a couple of months ago, we looked at the excellent Audio Damage Quanta synth, which creates complex pads and textures using this perhaps-so-far-underused synthesis. We say that because it’s possible that the very thought of smashing your sound up into small pieces – the core point of granular synthesis – might not sound that appealing. Also, the further synthesis of these grains is often unfairly associated with buzzing noises, which might put some people off exploring it.

This would be a real shame because, as both Quanta and Grain demonstrate, granular synthesis can be used to create some incredibly evocative textures and some brilliantly varied sounds. At its heart, it is manipulating granules for its synthesis, but it all depends on how this is achieved and how easy it is to get your head around – and in these two areas, Grain scores very well. It also has a big trick up its sleeve, too…

The grain synth (and sampler)

As well as granular synthesis, Grain allows you to do a lot of audio manipulation very quickly, both in terms of how audio files are edited and how they play back. Most granular synths enable you to do this, but thanks to the Props’ sleek workflow, you can almost use Grain as your main audio sampler – it even lets you record audio in and throw it straight into the plug-in’s engine for further processing or for straight-up editing.

Grain resembles other Reason plug-ins in terms of layout – Europa especially. The top area contains the aforementioned sample area. You load in a preset and the audio that makes up that sample is shown as the main waveform. You get both the overview of the entire audio file and in the area beneath that, you are playing back for finer editing. In our workshop, we’ll focus on some of the ways that you can manipulate your audio and some of the almost-instant effects you can introduce. It’s an initial way of exploring some sound-design options within Grain, without even touching on the granular synthesis.

Below this audio section, Grain’s powerful take on this is quickly introduced, as you can choose the algorithm type (ie, how the synth processes the grains). Next to this, you can introduce a more straightforward oscillator to layer into your sound. Both this and the audio signal are fed into a filter section, where you can mix levels or bypass before going into an amp envelope, which determines the volume shape and progression of notes.

With an added envelope section, LFOs and extensive modulation capabilities, you can see Grain is laid out like many other synths. Think of it as having dual layers, with filter and envelopes, and you’re on the right track.

In this, the first of two workshops on Grain’s sound-design potential, we’ll focus on the sampling side and how you can very quickly make one of Grain’s excellent presets your own. Then, we’ll look at some of the audio-editing options and how you can create a buzz with your own samples or Grain’s own presets. We love the idea of taking someone else’s hard work with programming presets and then making one or two simple changes which have some dramatic consequences on the sound. It’s zero effort to make the sounds yours, and that’s what is so good about Grain – and what great sound design is all about.

There’s a lot more to Grain than what we’ll cover here, so next time around, we’ll go into more depth and you’ll soon realise what a beauty this synth is. Europa, you say? What’s that?! 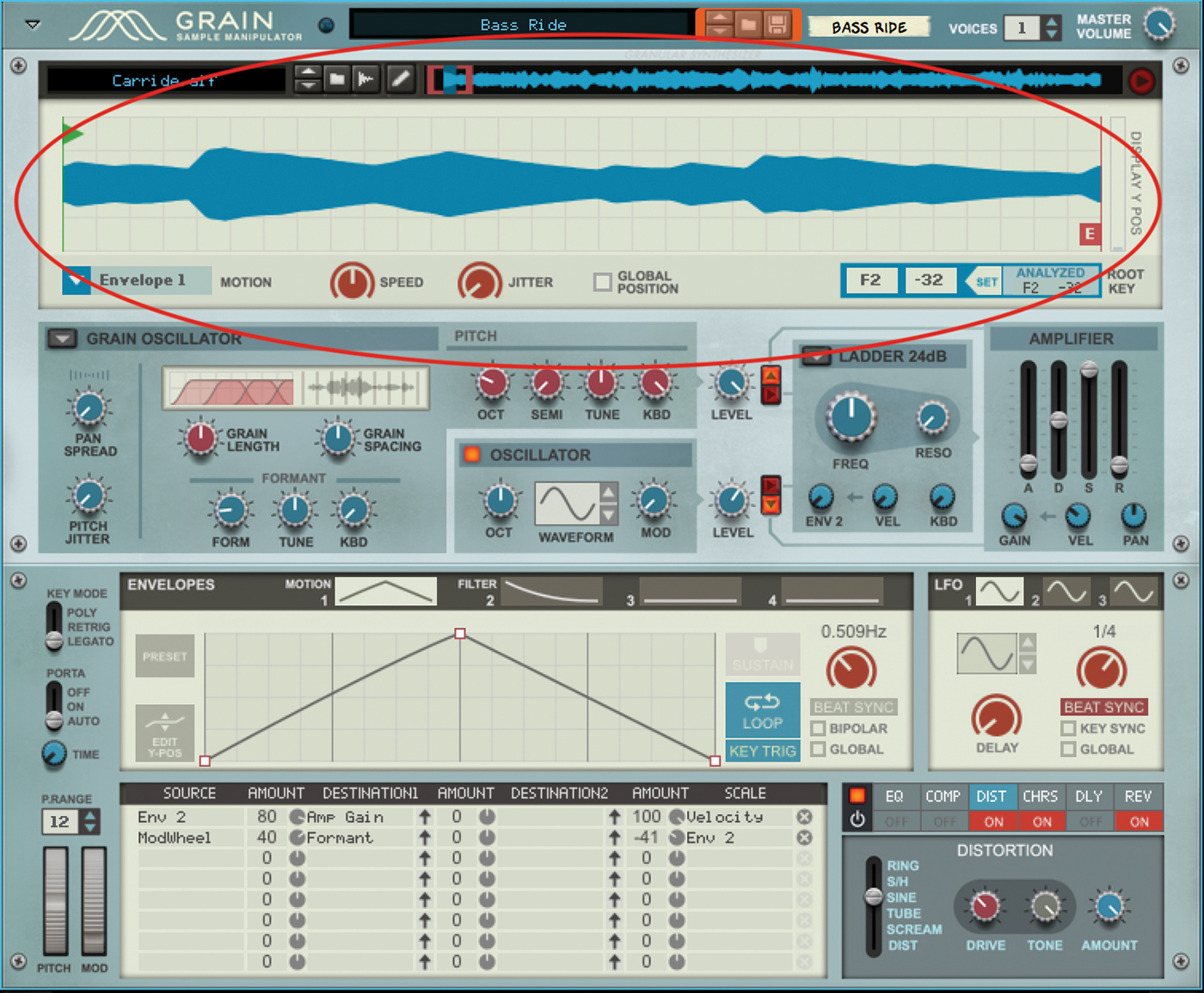 1. A quick overview of Grain will reveal that the top half is all about audio, and this is the area we’re going to focus on with this workshop. This shows the main audio sample that makes up a Grain preset. 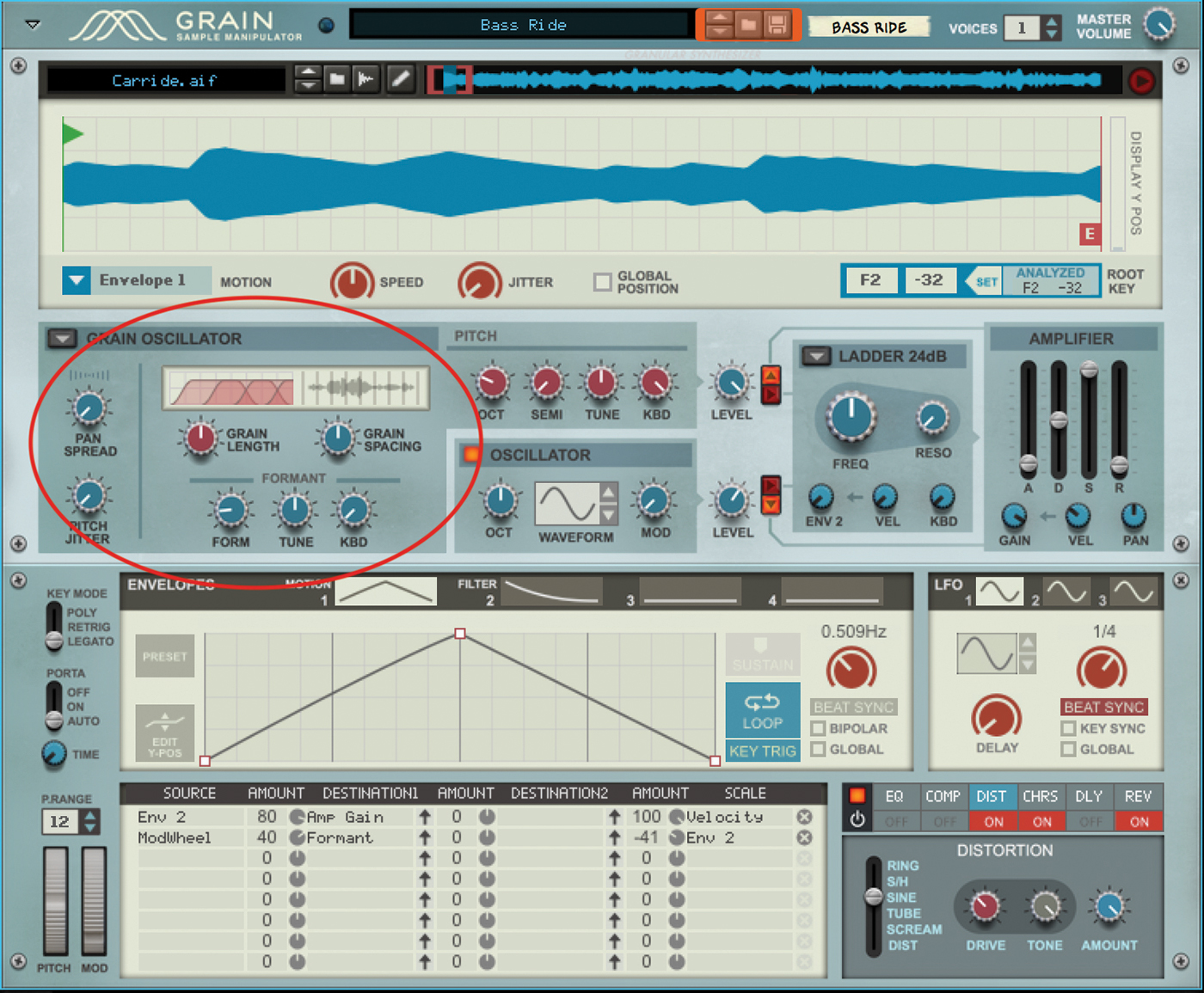 2. The main engine that sets Grain apart from most other synths is this section: the granular engine. Here, you get to smash your sample up into grains and choose algorithms to process them. 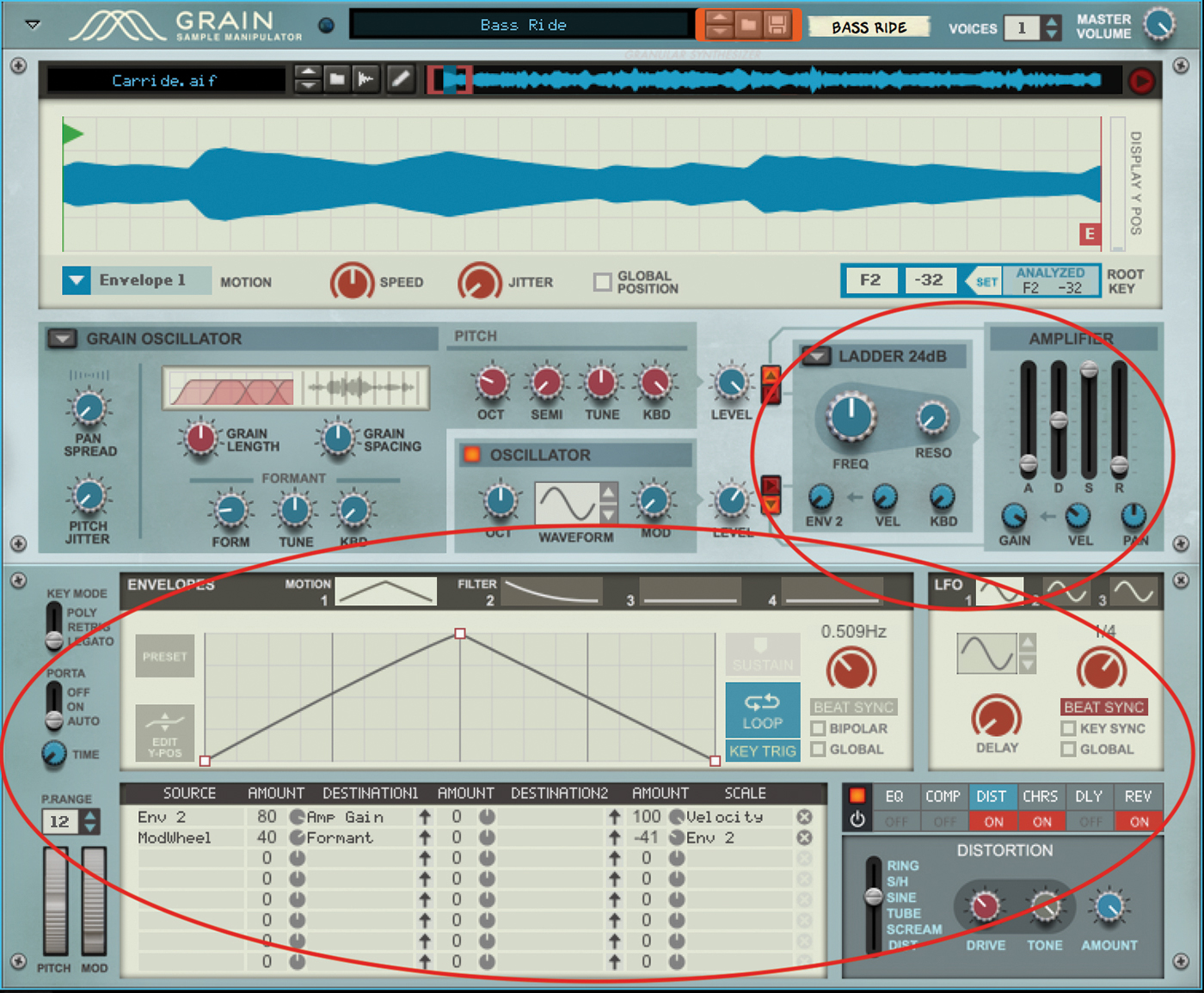 3. The rest of the synth is straightforward, with audio workflow running from left to right, top to bottom and flowing through filter, envelopes and effects, with a comprehensive modulation matrix. 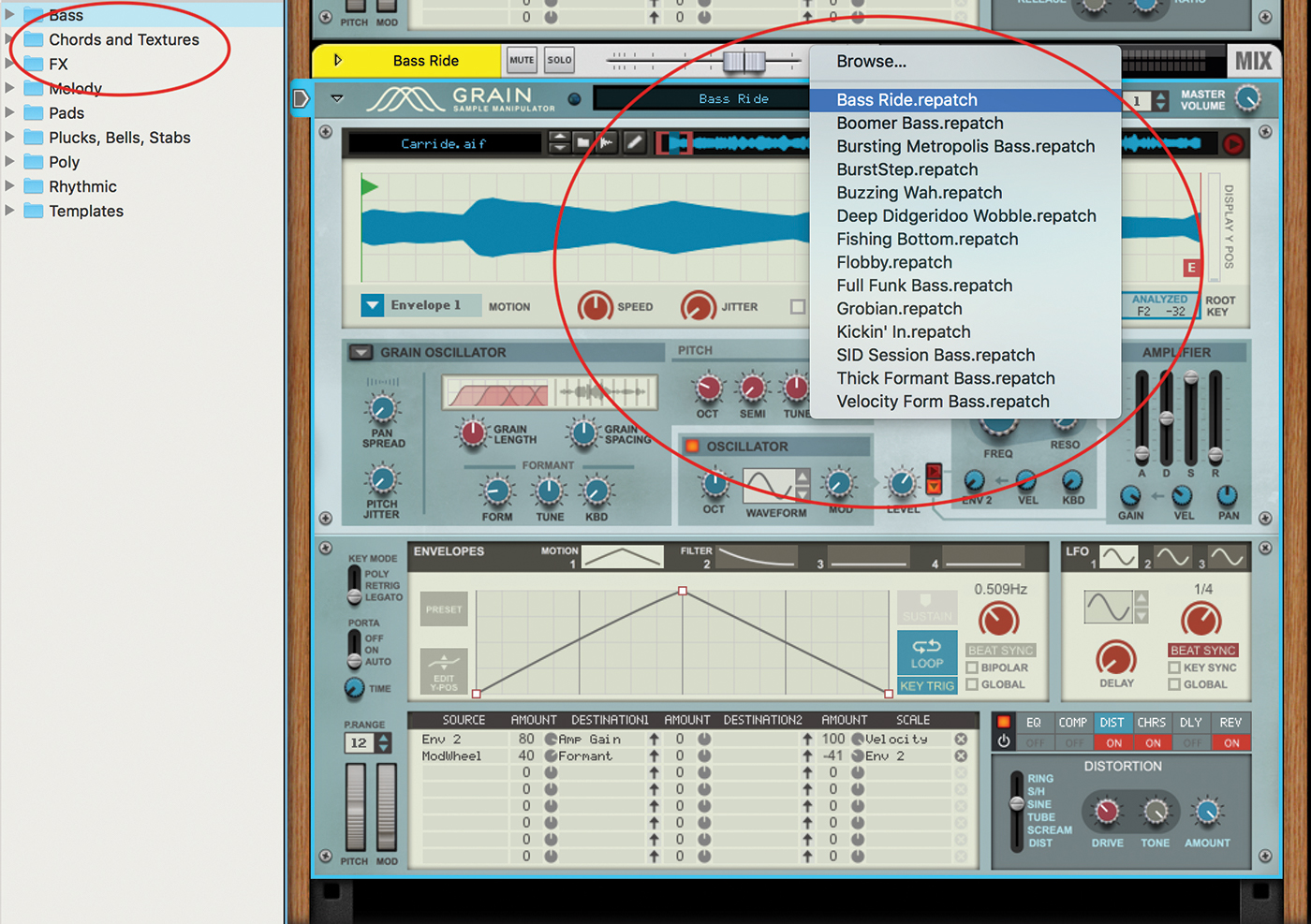 4. Load in a Grain patch by clicking on the top browser window. Pressing the up arrow above the patches to the left will take you to the main folders of presets including Bass, Chords and Textures, Pads and more. 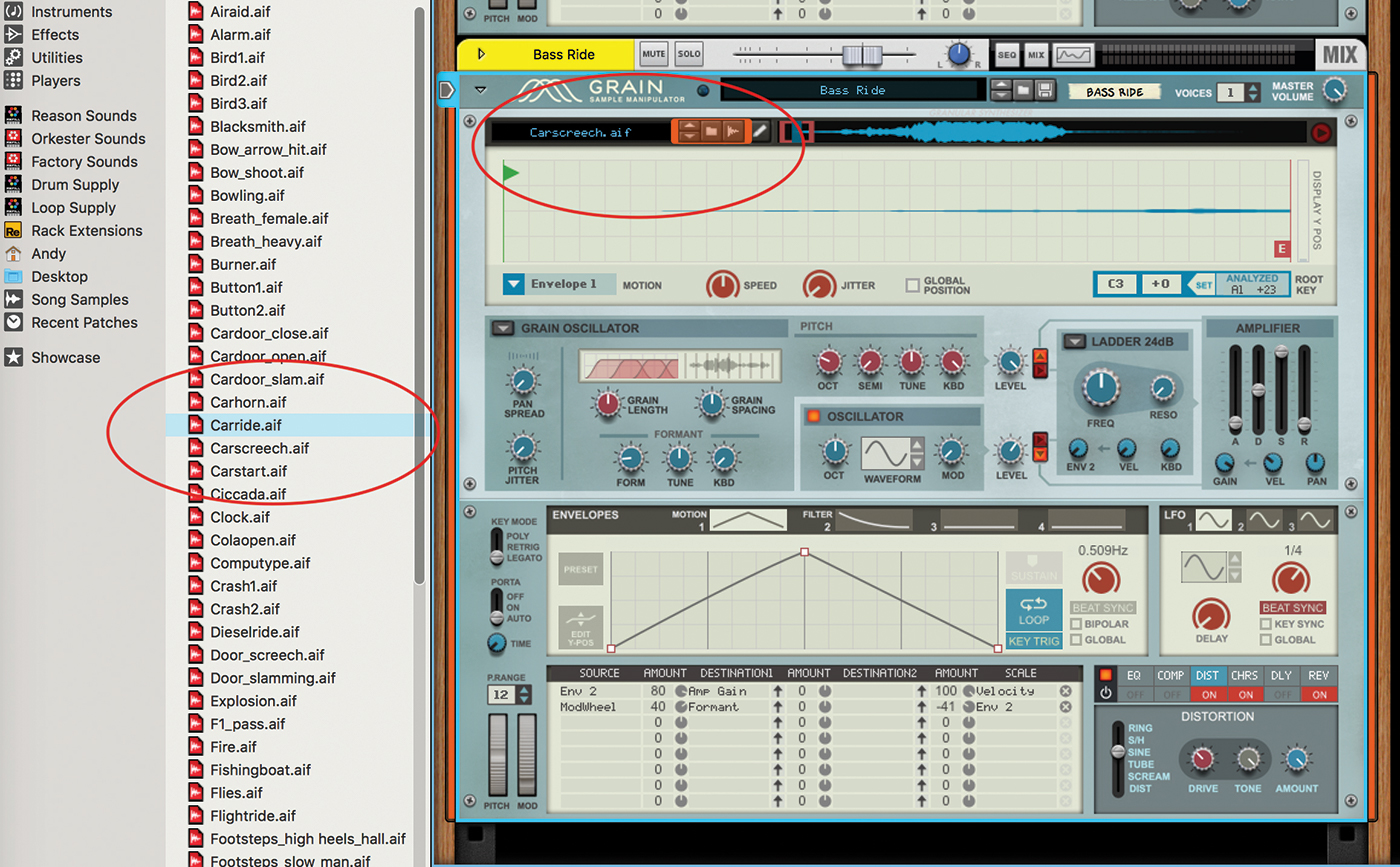 5. Each patch utilises a sample from Grain’s library as its core sound. If you find a patch you like, you can simply load in another sample and retain all of the other parameters, thereby quickly making the preset your own! 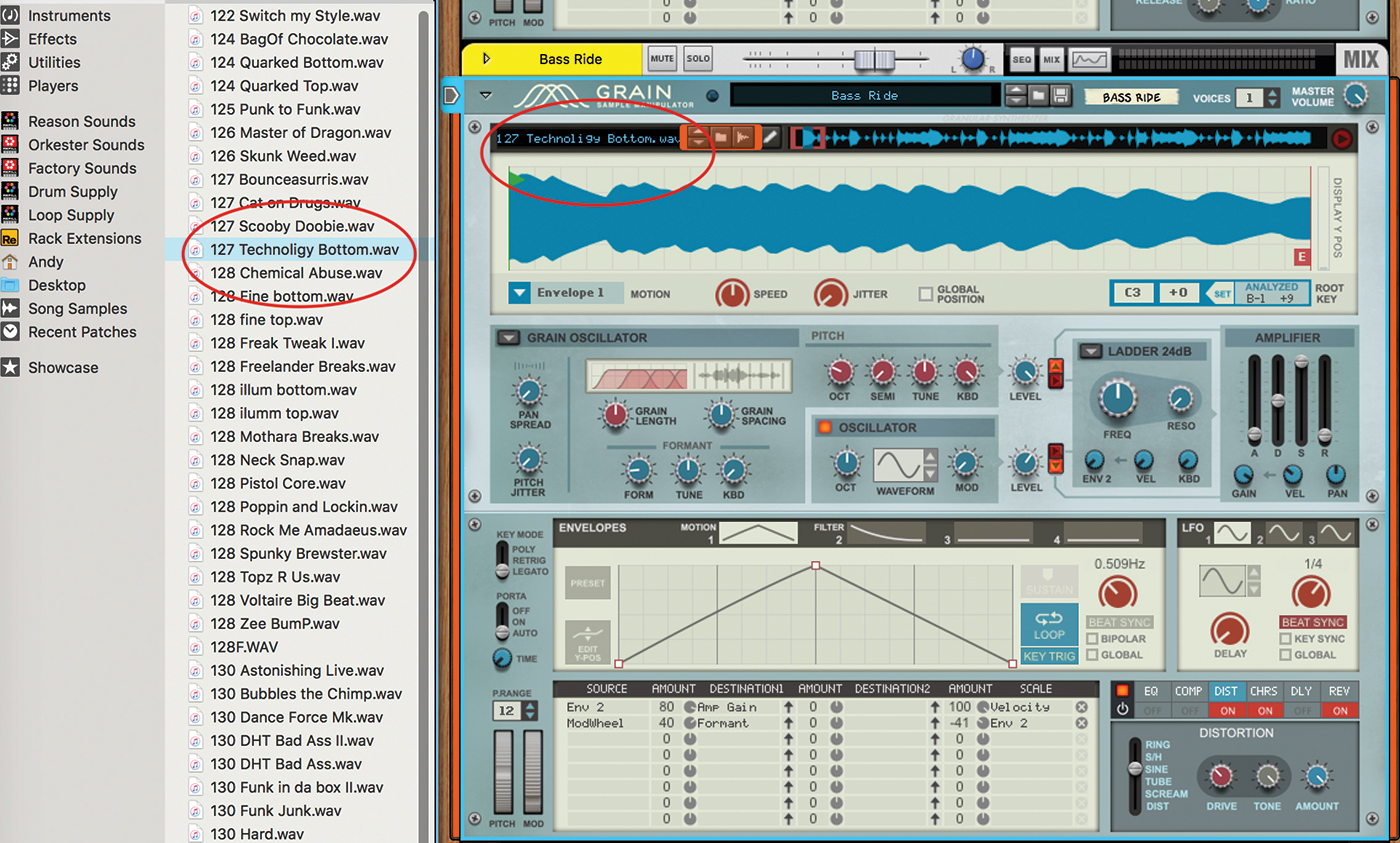 6. The real beauty of Grain is that you can load in your own audio. Click the browser button in the lower sample window and choose your audio. You can even simply drag an audio WAV, AIFF or mp3 into the main edit window.

SAMPLE EDITING... We don’t touch too much on sample editing in this tutorial, but you can get in very deep by double-clicking the icon left of the top sample window that brings up an editor for reversing, normalising and using other loop modes in Grain. 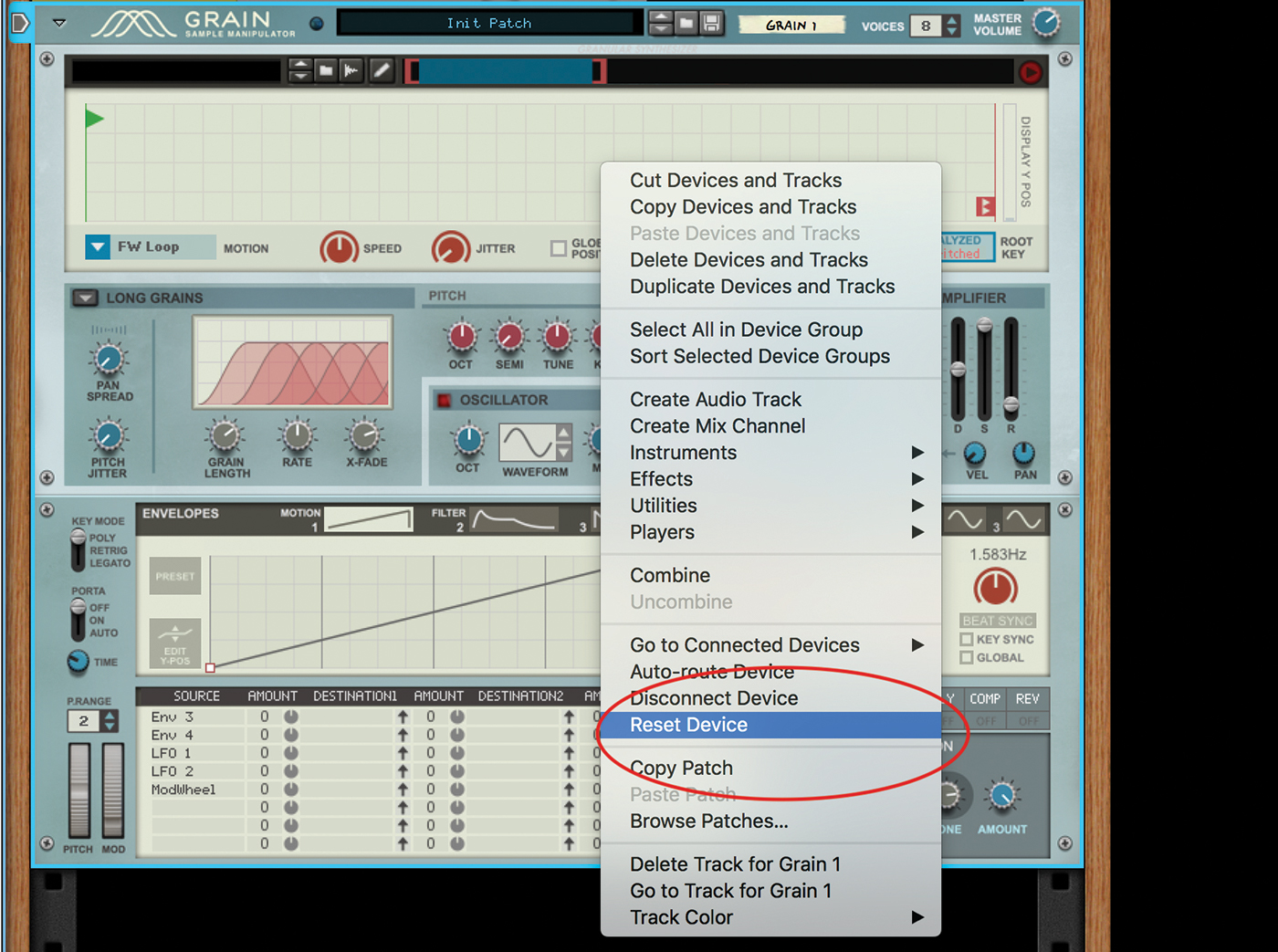 7. Now we’re going to show you Grain’s sampling sound-design side. Initialise the synth by right-clicking on it and selecting Reset Device (or select the same option from the Edit drop-down menu). 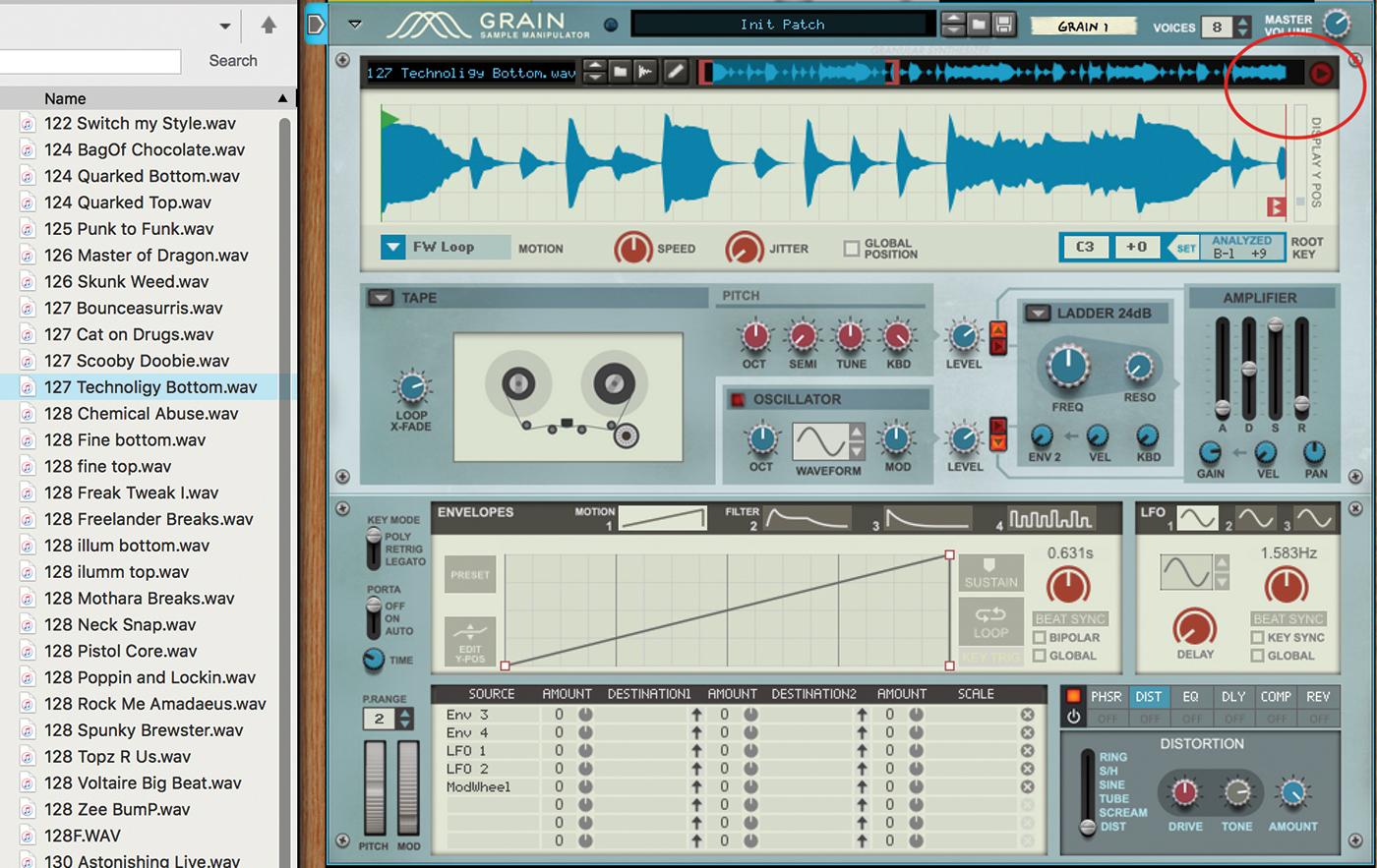 8. Grain is empty, so load in a sample of your choice. You can audition it from within Grain by hitting the red play button next to the top wave. You should be able to play it from your keyboard via MIDI. 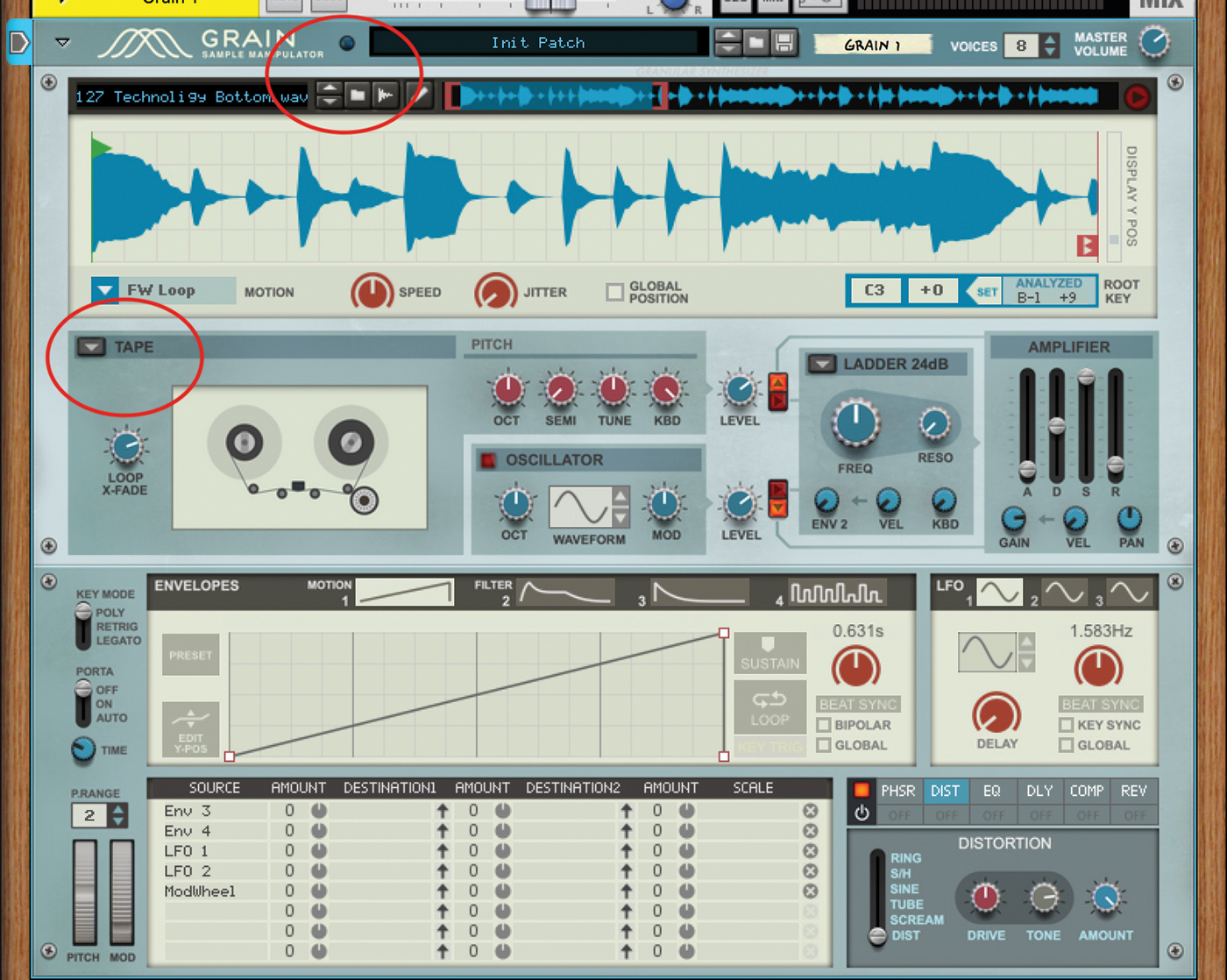 9. If you’re not getting any sound, check the MIDI note-on light – and that the Tape option is selected within the Granular engine (this will just give you normal playback without granular effects and processing). 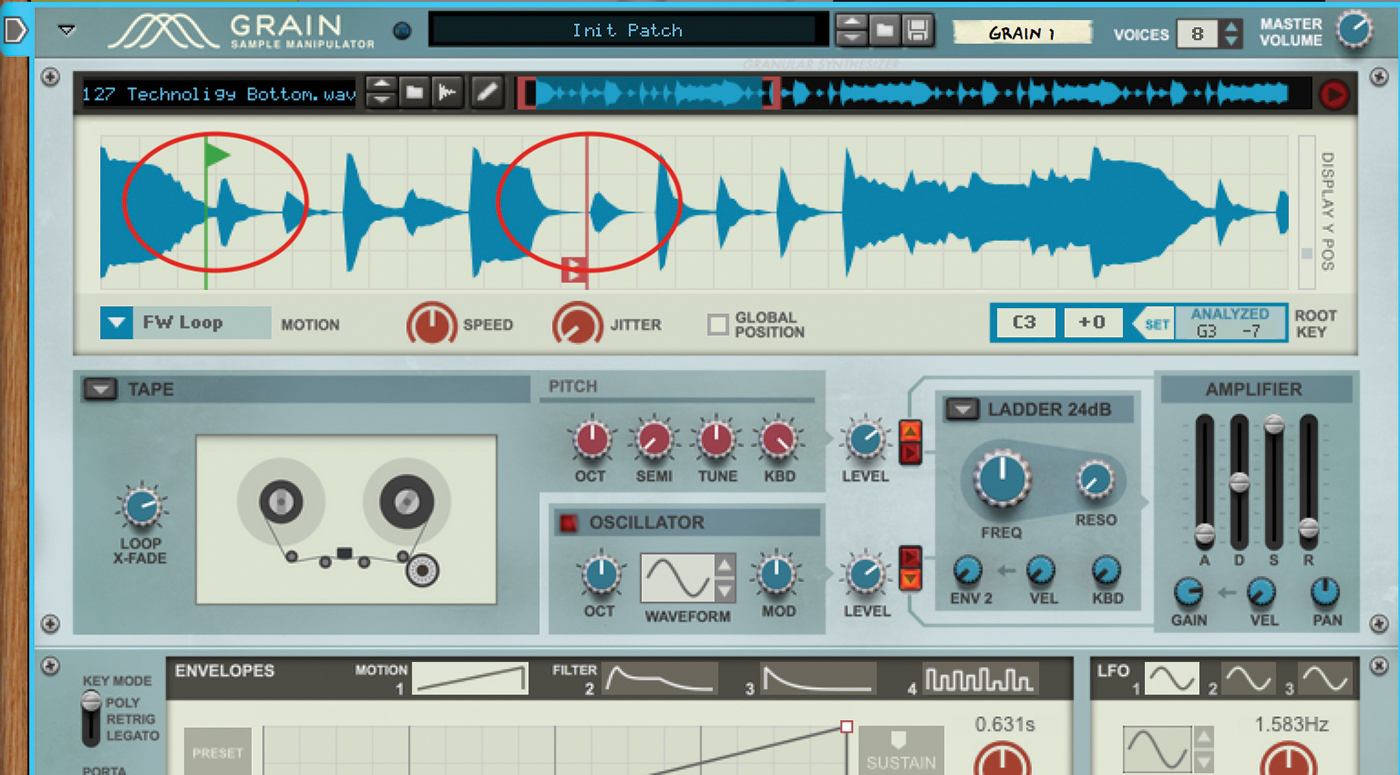 10. For some simple sample editing, move the green start arrow and red end arrow around to change the start and finish points of your MIDI-note-triggered sample. 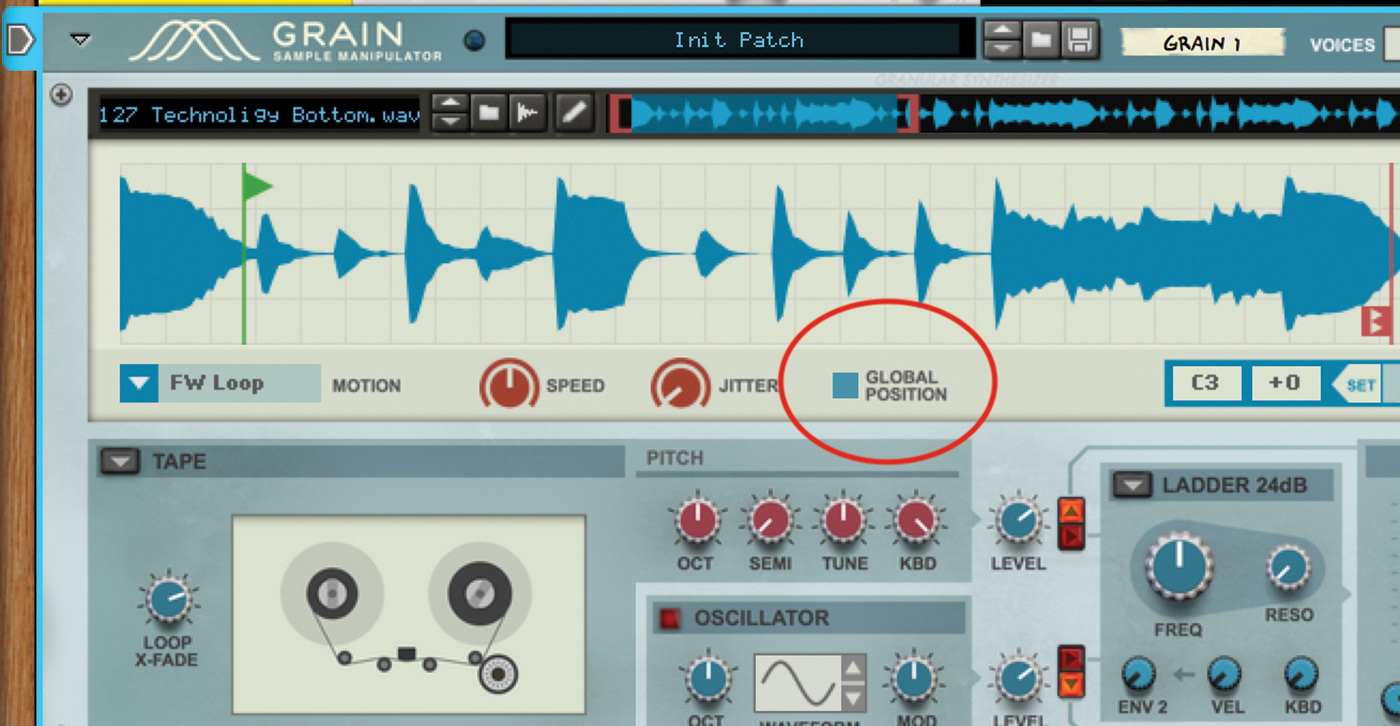 11. Currently, whenever you hit a MIDI note, the sample restarts from the beginning. If you hit the Global Position option, hitting the keyboard key will simply start it from its current position. 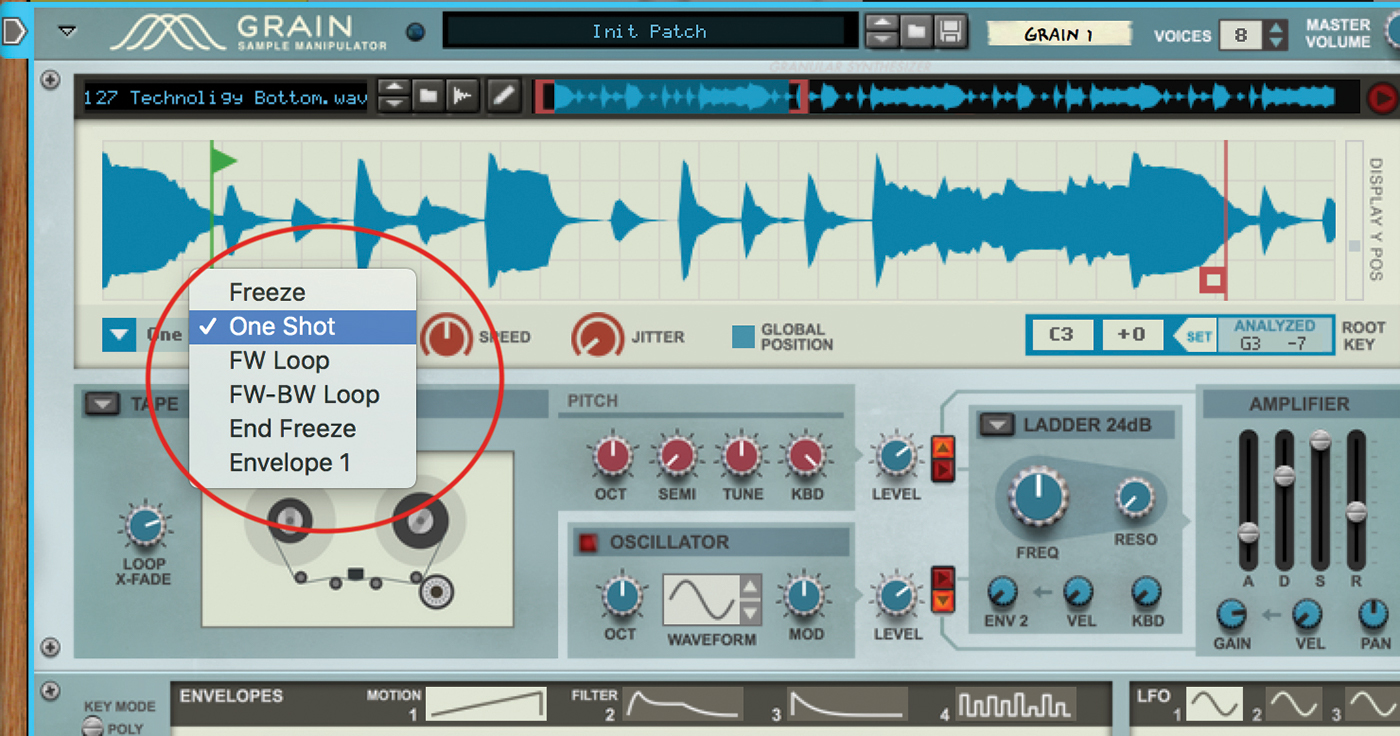 SETTING YOUR SAMPLE KEY… Grain will work out the pitch of the start of your sample automatically and display it in the bottom right of the lower waveform window. If you want to trigger it from that key, you can set this, and also the pitch and key of changes, as the audio progresses. 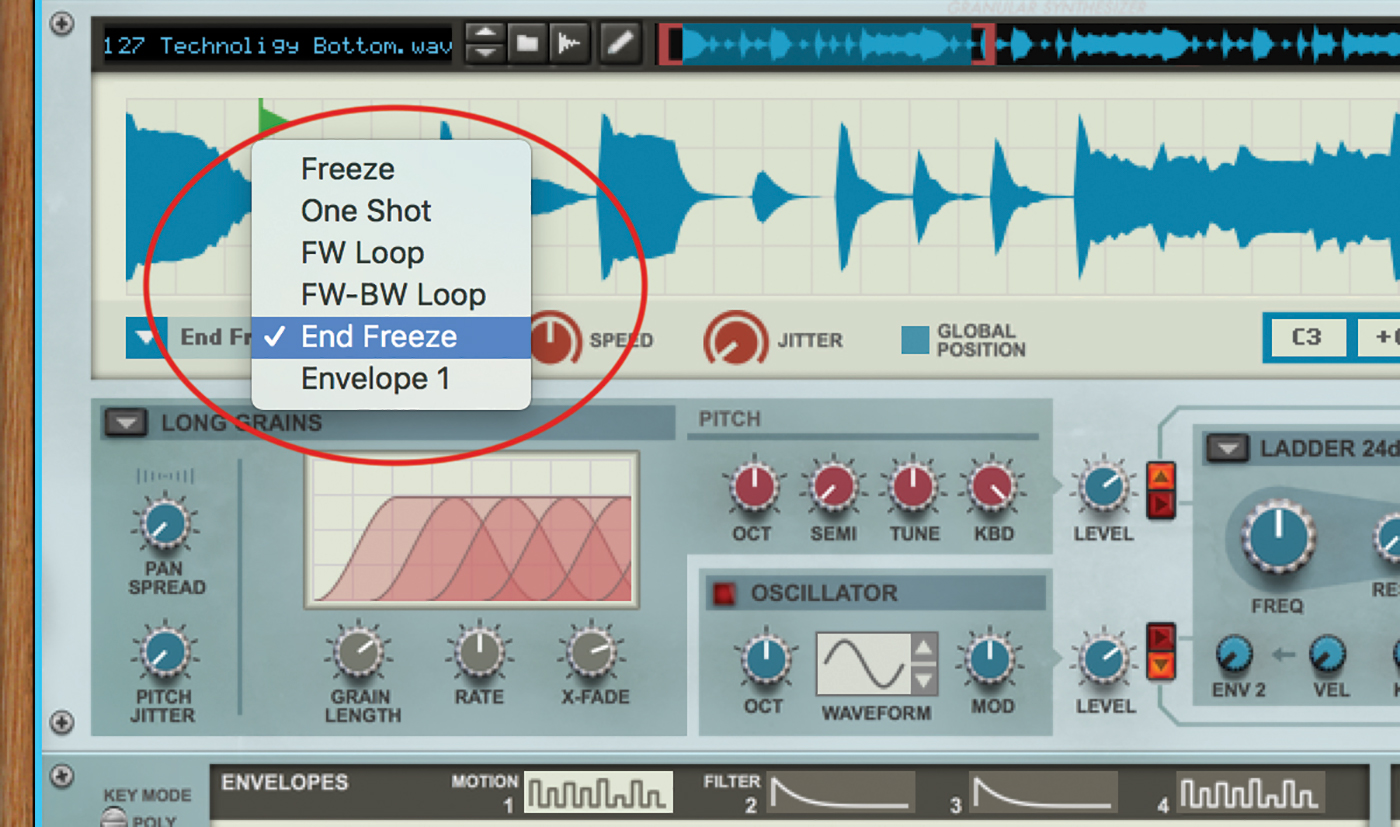 13. Things can get buzzy when you select the Freeze mode here, which simply plays and repeats the audio from the start position or, with Freeze End selected, around the end position. 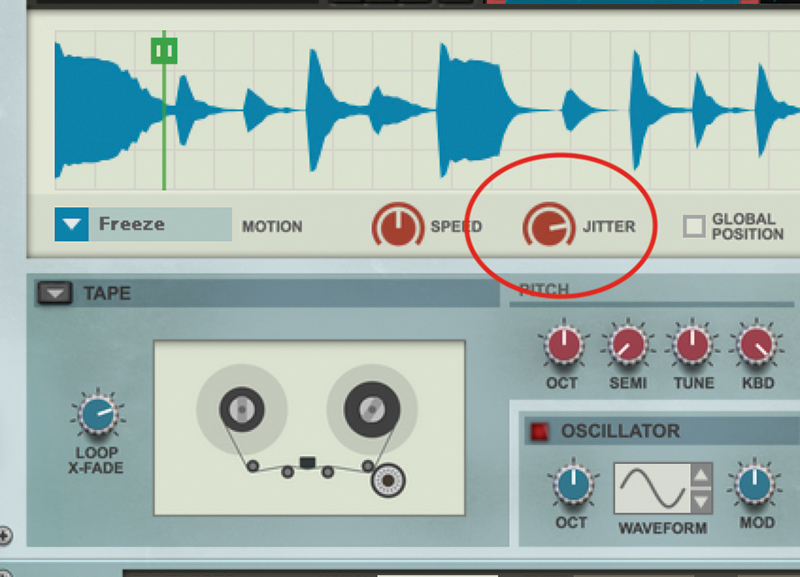 14. The range or width of these Freeze points can be increased with the Jitter control, which adds a random element to the Freeze playback width for a great and unpredictable effect. We’re really in granular mode now.

15. So let’s throw ourselves totally into the Granular side of Grain. Engage Long Grain mode while in Freeze and up the Pan Position to hear your grains spread around your speakers. 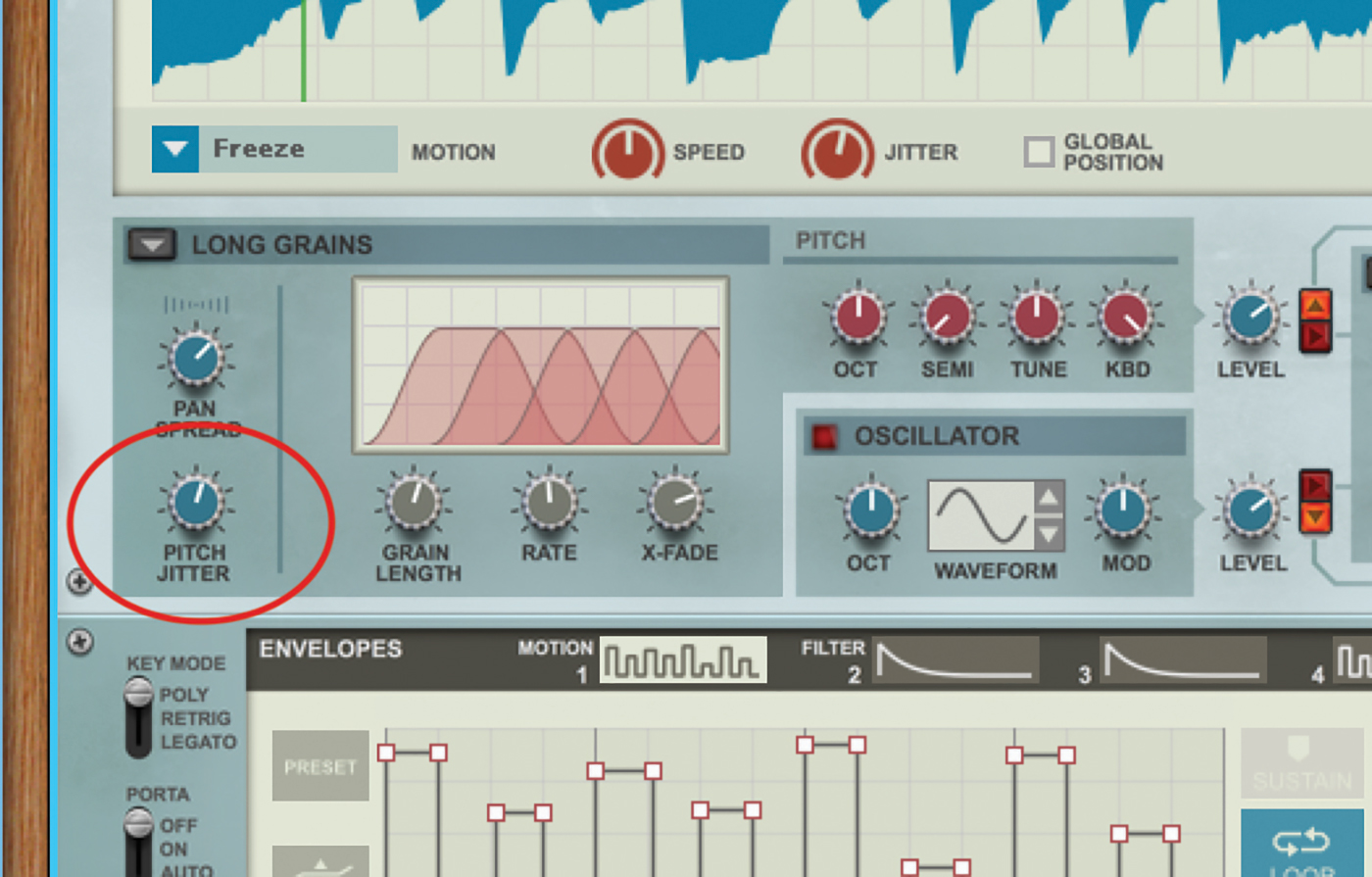 16. We can really hear granular synthesis in action when we dial up the Pitch Jitter, which introduces more pitch variation on the grains as you go further up, but sounds like a chorus effect lower down. 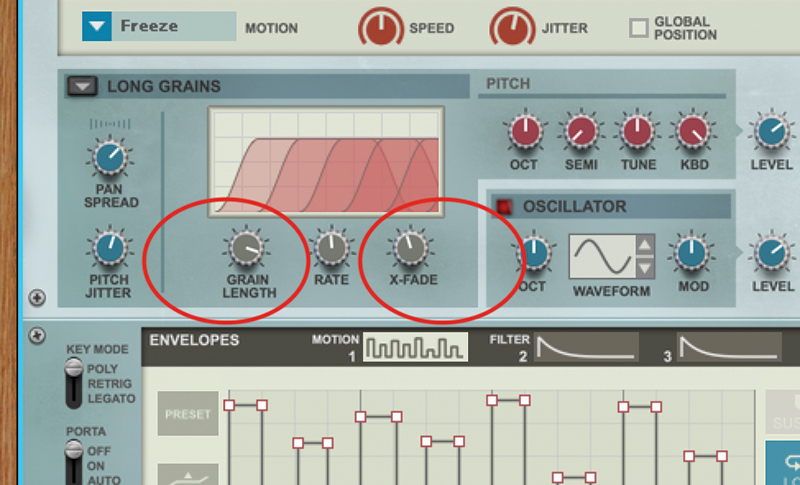 17. Now increase the Grain Length. You can see what this does on the display above; the shorter, the more blippy. Experiment with the X-Fade control here, too which can also add great glitch effects for beats. 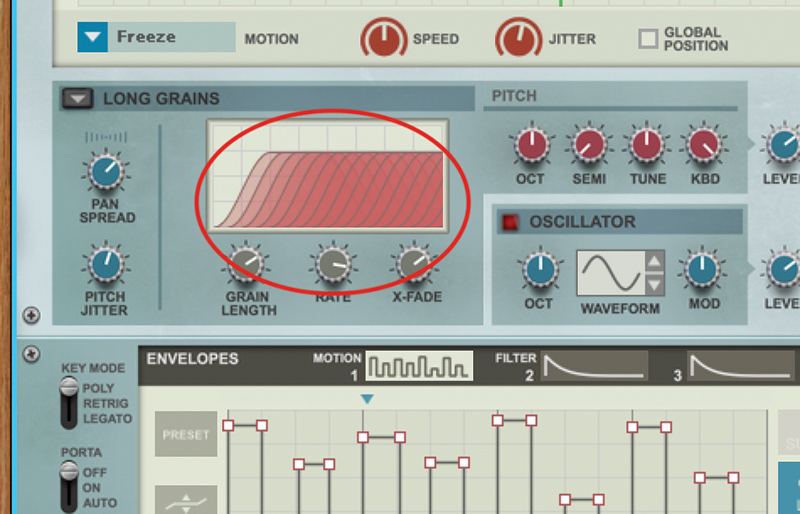 18. Finally, the Rate control brings more grains into the equation, or at least faster ones. That’s the basics of Grain and granular synthesis, but in our next Reason tutorial, we’ll go a lot further with this amazing synth.

Move on to the second part of the tutorial here.