Sound Design in Reason 10 – The Basics

In the first part of a new sound design in Reason series, Andy Jones focusses on some of the specific features that make it a sound creator’s dream… The phrase ’sound design’ is more correctly employed when talking about the creation of soundtracks for movies and games. Here, though, we’re using it in another sense, […]

In the first part of a new sound design in Reason series, Andy Jones focusses on some of the specific features that make it a sound creator’s dream… 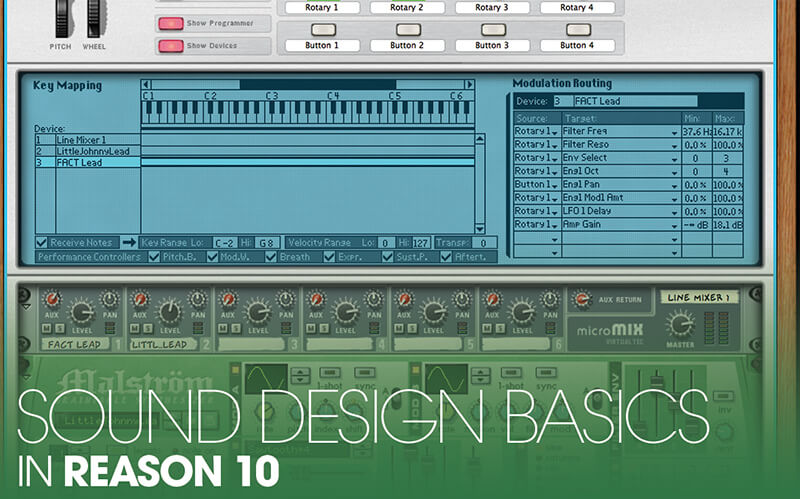 The phrase ’sound design’ is more correctly employed when talking about the creation of soundtracks for movies and games. Here, though, we’re using it in another sense, that is, designing your sound for your own music.

With so many people able to produce music these days, you have to stand out to get noticed. That could be because you employ a blend of styles that no-one else does or, more typically and easily, a set of very individual sounds that no-one else has.

Therefore, as a music producer, it’s important to have an armoury full of sounds that perhaps aren’t available to others so you can really plough your own individual path, safe in the knowledge that you will sound unique.

Recently we’ve interviewed several composers and producers who advocate this approach. Junkie XL, for example, is a sound designer in the truest sense in that he scores many top Hollywood films, but he also dedicates his Sundays to creating his own unique sounds by way of an (albeit huge) modular synth setup.

But don’t worry if you haven’t got such a setup, or indeed the luxury of an entire day to wrestle something new out of it. We’re taking the very much quicker software approach to designing your sound, and it’s easier than you might think.

All DAWs come packed with many instruments and effects that make creating your own sounds relatively easy. Propellerhead’s Reason, though, comes locked and loaded with more than most and it is therefore a truly limitless DAW for sonic experimentation.

So good is the software for creating new sounds that we’re dedicating a full seriesof tutorials to explore the many aspects of Reason’s sound design capabilities. In this tutorial we’ll start with some very basic synthesis techniques to quickly change a preset sound into something you can call your own.

There are many easy ways to do this which we’ll run through, whether it’s the more obvious tweaking of a filter or resonance dial or changing the envelope of a sound so that it moves from sharp bass or lead sound into a smooth pad.

Changing the very core ingredients of a sound – that is the waveforms that its oscillators generate – will quickly change its nature and we’ll be covering some of the more dramatic ways that you can do this using Reason’s Europa synth (although you can use many other of Reason’s other synths to do it should you wish).

Armed with some basic synthesis knowledge you can now go in and quickly adjust any preset sound and design it so that it’s yours. It’s so easy that it almost feels like cheating. Reason is also packed with effects and we’ll touch upon a couple of not very subtle ones that will really make big changes to your core sound.

Next up we’ll move on to Reason’s secret weapon, one that really helps make it arguably (actually, there’s no ’arguably’ about it) the best DAW out there for creative sound experimentation. We are talking about the Combinator.

This device allows you to very quickly stack up multiple instruments and effects, and have them play across different or the same parts of the keyboard. On a very basic level, sound design can be about combining sounds to create new ones which we will show you how to do with Combinator. You might want to take the first part of one sound and blend it with the tail of another.

Sound design like this not only gives you unique results, it also sparks off some inspirational thinking. Load up a couple of sounds and apply Reason’s Alligator Filter Gate, and you’ve suddenly got a complete tune on your hands with one key press!

One of the many other great features about Combinator is that you can very quickly assign the front panel controls of a Combinator to control any function within the instruments loaded into it. Rotary 1, for example, could control the filter of one synth and the resonance of another.

Or you could use Rotary 1 to control every parameter of every instrument in a Combinator (crazy, but you can do it!). Once you have the Combinator dials set to control the parameters you want you can then record their movement and edit the automation data that results so you have the perfect, evolving sound.

Any Combinator patches you create can also be saved and loaded back in at any time. Combinator really is a great tool for mixing the many different sonic features within Reason and you’ll soon be using it in all of your sound design experiments.

Next time we’ll look at automation and Combinator in more depth. Until then! 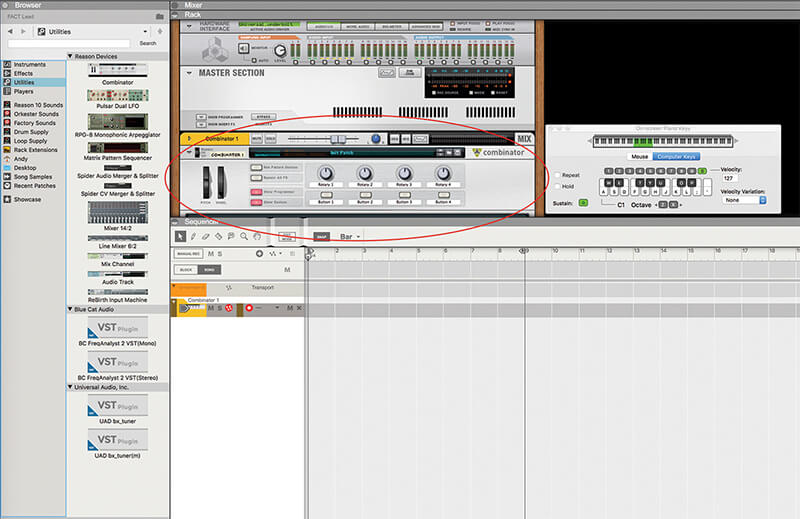 1. Before we start, load up a Combinator into your Rack from the Utilities folder. We won’t be using it yet but we do want everything we do over the following pages to take place within it as it makes everything easier to control. 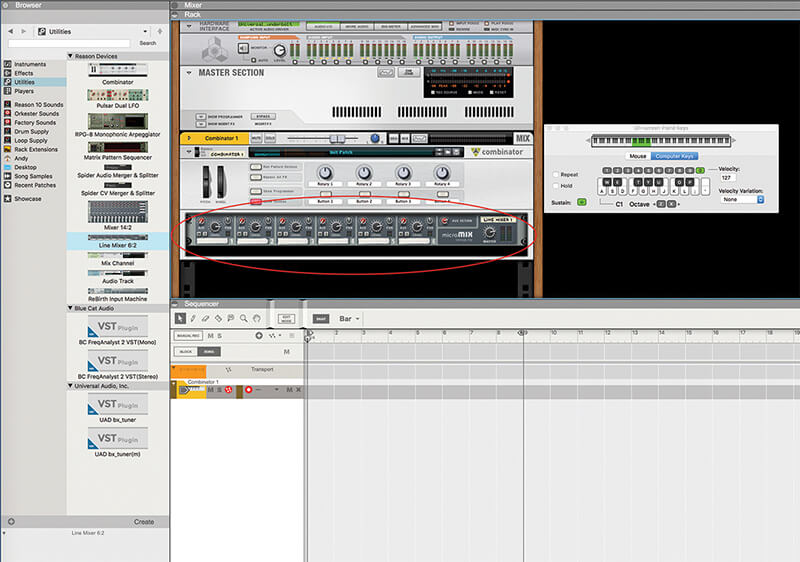 2. Now drag in a 6:2 mixer into the Combinator slot. This will also be used later when we come to stack our sounds and effects within the Combinator and adds just that bit of flexibility that we need and also allows Aux effect routing. 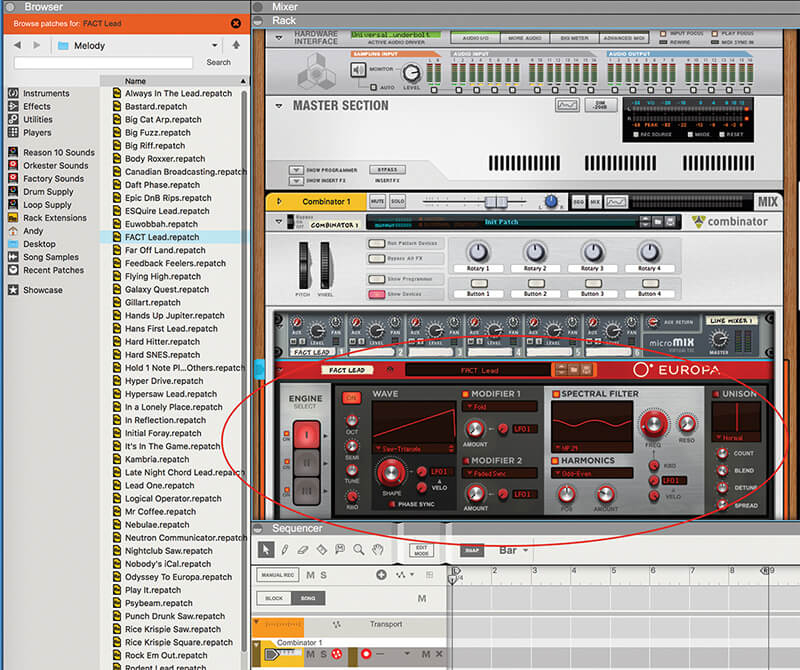 3. We’ve now loaded in a Europa synth, the great new synth that came with the most recent version of Reason, but you can load in any of the synths that Reason comes with as we’ll now be looking at some synth basics. 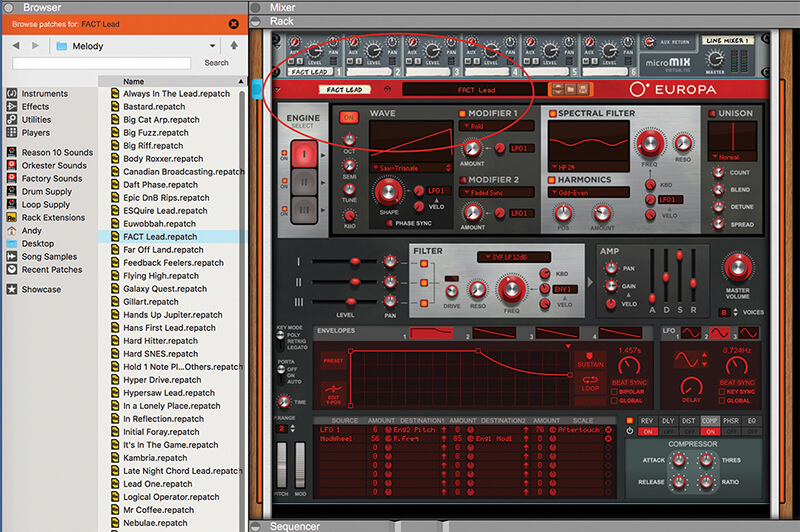 4. We’re just going to use the FACT Lead preset. As you can see it’s automatically routed through Channel 1 on the Line mixer. The sound is quite punchy and aggressive as it stands. 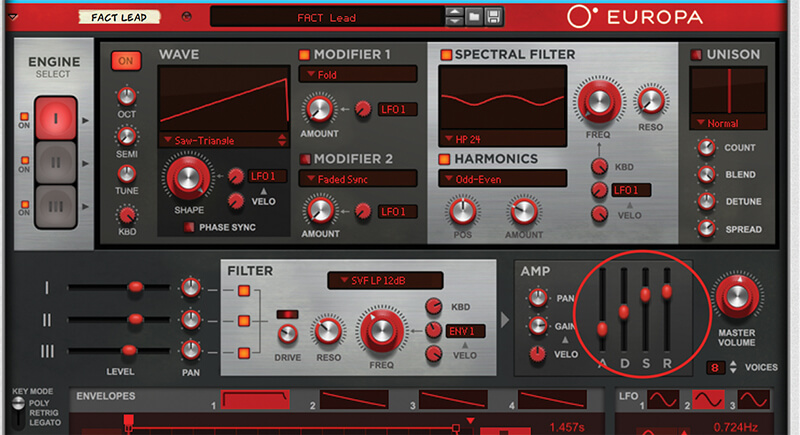 5. You can very quickly make it – or any other lead or bass – more pad-like by increasing the Attack time in the ADSR to 21ms and the Release time to around 7.4s. This quickly turns a punchier sound into something more mellow. 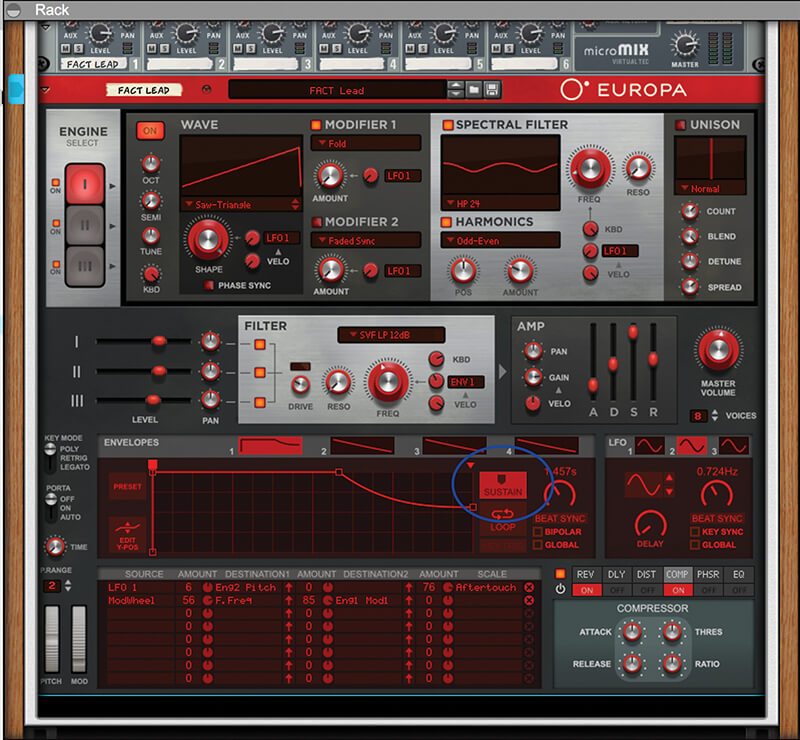 6. The envelope of the sound, i.e. how it alters over time, is determined by the selectable Envelope under the ADSR. If you switch on the Sustain button (circled in blue) it doesn’t apply making the sound even more pad-like.

The best effects Reason’s many instruments cover a lot of bases when it comes to sounds but its effects are perhaps the unsung heroes of sonic creativity. In our sound design experiments we particularly like the Alligator and Pulveriser, plus the ’fattening’ tools like the Chorus and Flanger. 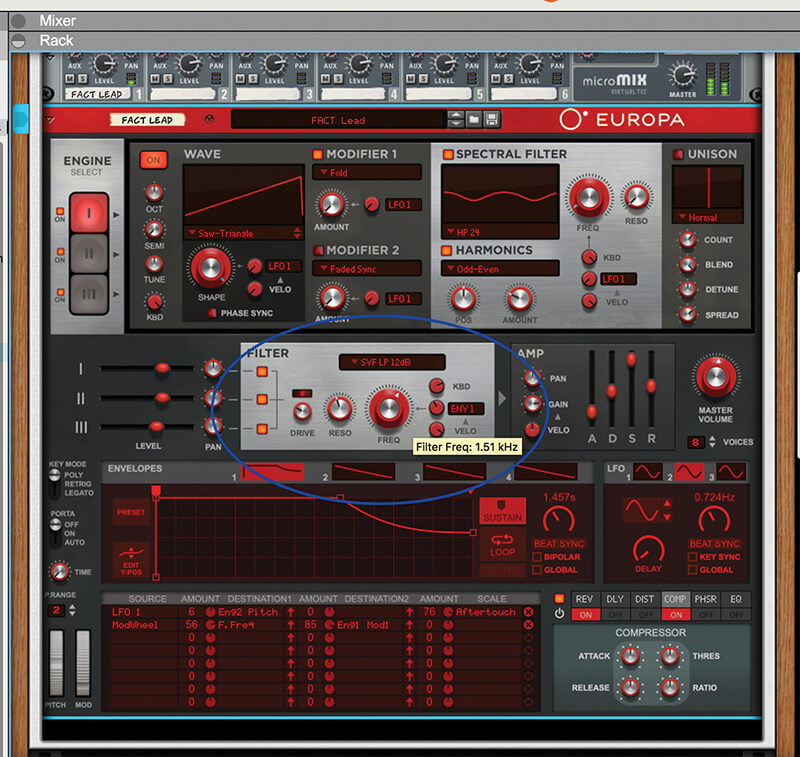 7. The Filter and Resonance dials are also dramatic sonic changers. Increasing the frequency with the Filter dial makes the sound raspier while experimenting with the Resonance makes it squeal. We’ll return to these later. 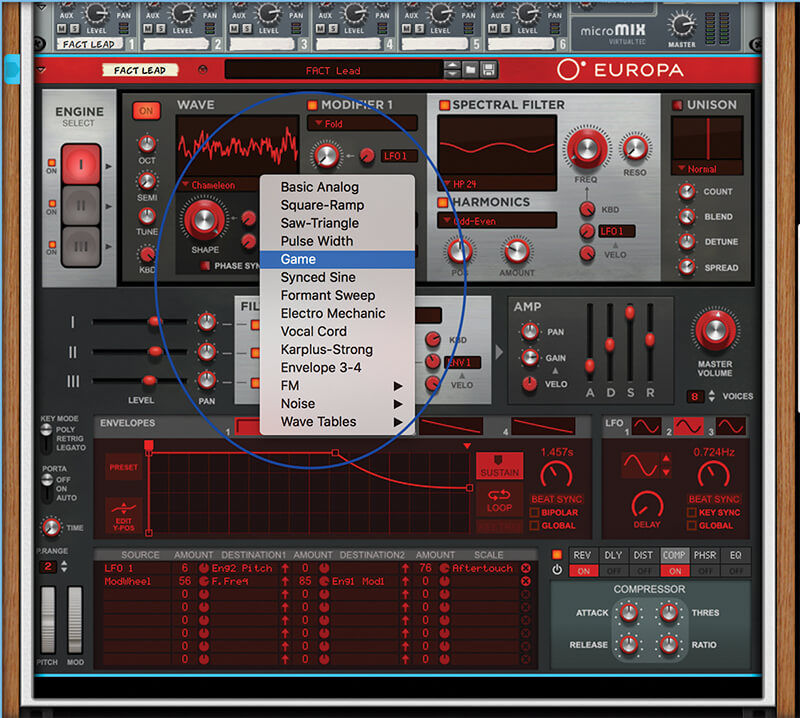 8. Now select one of the oscillators (in Europa’s case it’s Engine Select). Play a note and dial through the waveform types that this oscillator uses by clicking on the down arrow. You’ll hear some very dramatic changes. 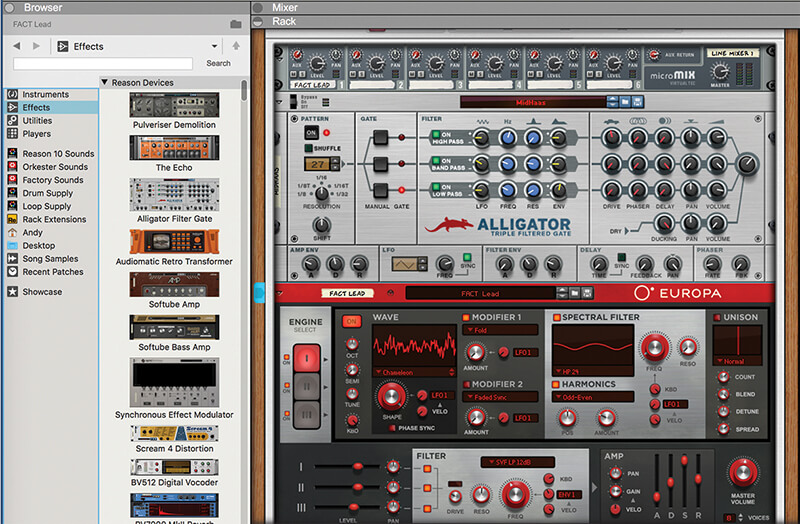 9. That’s the basics of synthesis covered. Now we’ll get more serious with some effects. These can be dramatic like Alligator which instantly turns your sound into a sequence for some inspirational and instant tuneage. 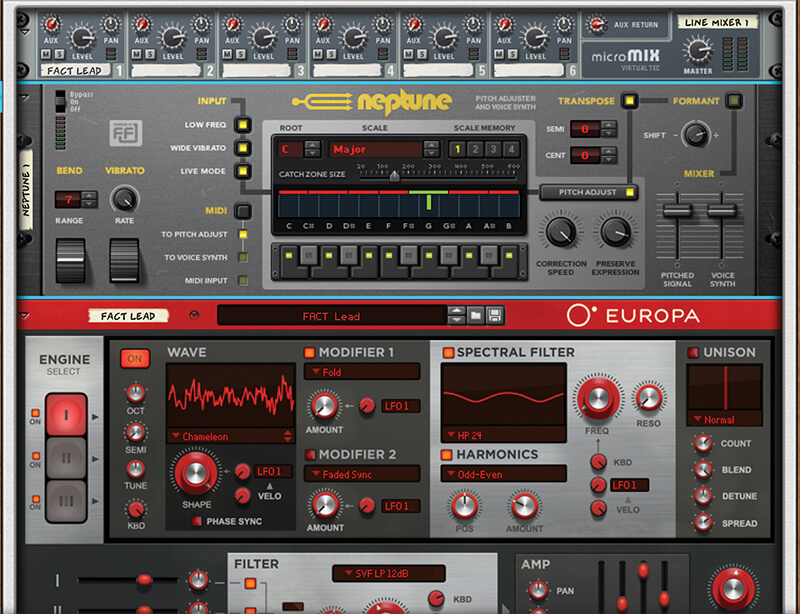 10. The Neptune Pitch Adjuster is another great and very dramatic effect that can easily be used for creative sound design. Experiment with the Input Modes and Pitched Signal Level for instant Boards Of Canada.

11. We’ll return to Combinator now it’s time to stack sounds up. Drag a Malström in and load in the Little Johnny Lead preset. You’ll hear it combined with the FACT Lead sound from Europa thanks to the Combinator. 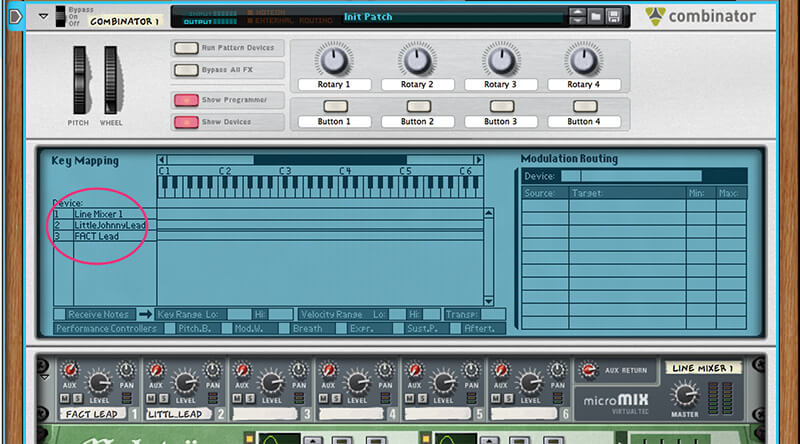 Save patch When you are happy with your newly-designed Combinator – complete with instruments, effects and assigned Rotaries and Switches – click on the File icon to save it or load it back with the same icon in an instant. 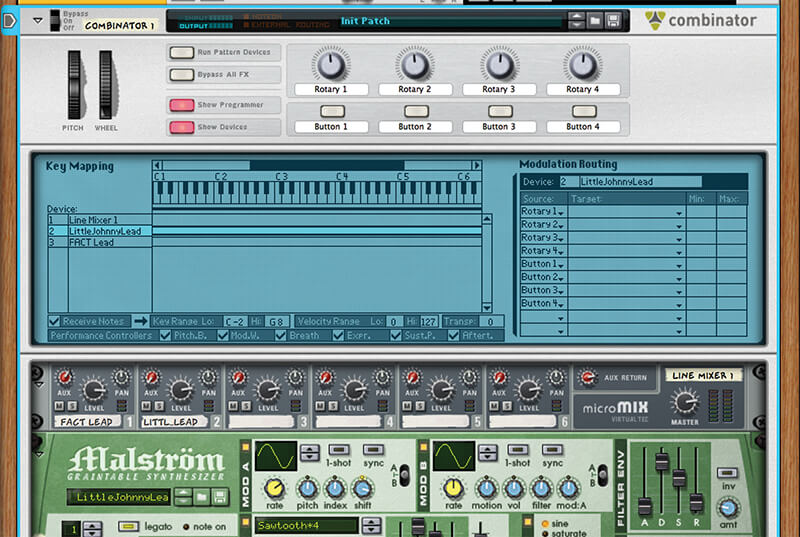 13. Click on the Malström preset Little Johnny Lead and the Combinator front panel Rotary and Button controls will appear on the right. You can now assign these to control pretty much any parameter within Malström. 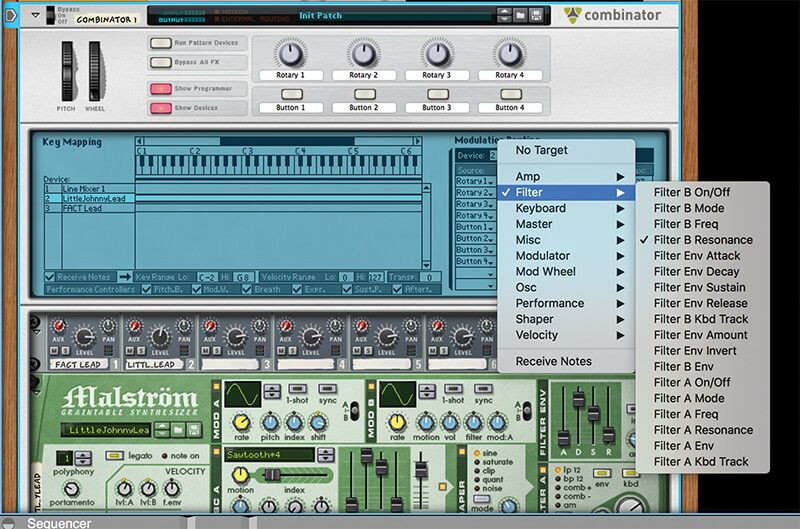 14. Click on the Rotary 1 Target column and select Filter B Freq from the drop down menu. The first dial on the Combinator will now control this parameter. Now select Filter B Resonance for Rotary 2. 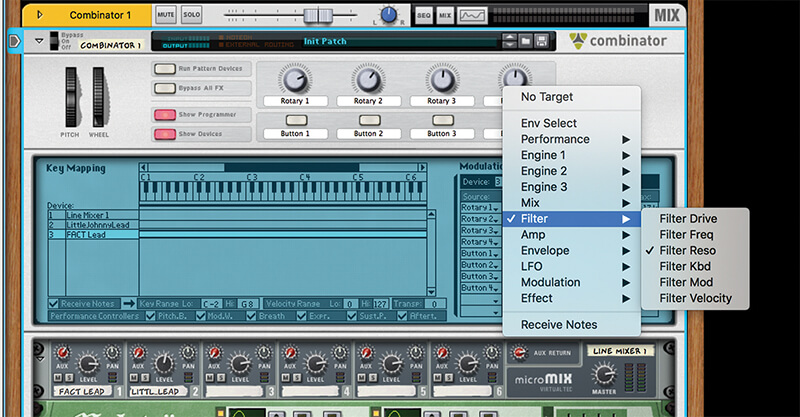 15. Click the FACT Lead preset and select Filter Freq as the Rotary 1 Target. Similarly select Filter Resonance for the Rotary 2 Target. These two Rotaries now control the same parameters on both synths. 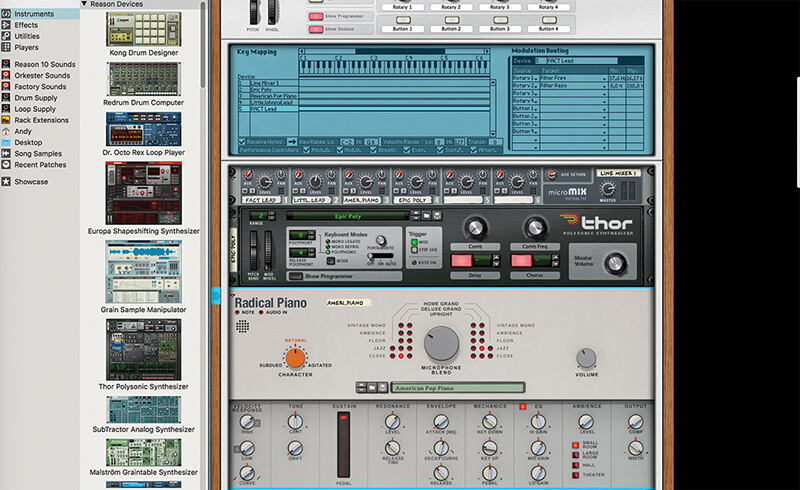 16. You could stack up loads more instruments to make a huge sound and control different parameters within each new addition with the same (or different) Rotaries – that is the power of the Combinator. 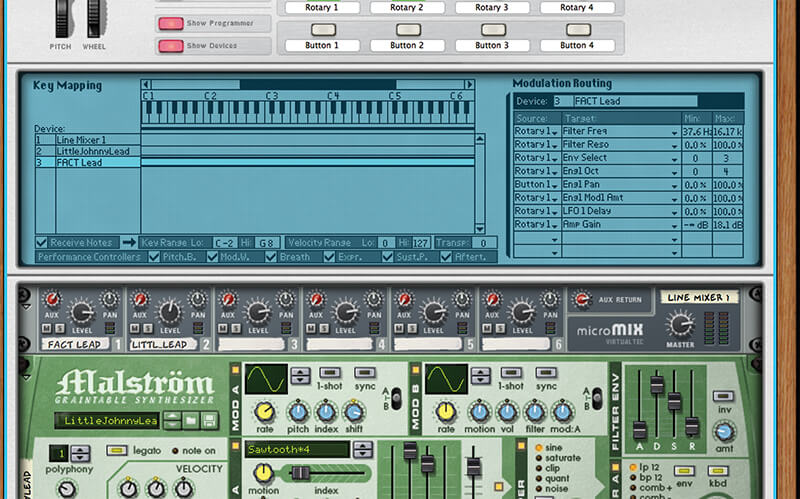 17. Here we’ve assigned loads of different parameters to Rotary 1 so this single dial will control all of those parameters simultaneously. In fact just one dial can control every instrument’s parameters within a Combinator. 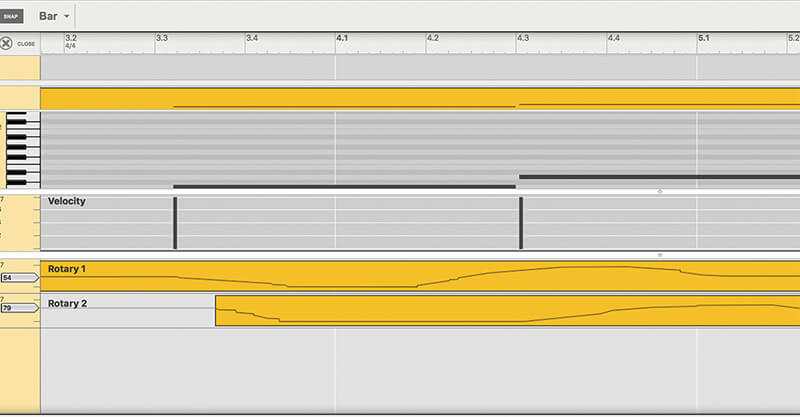 18. Moving Rotary 1 and 2 sends MIDI data which you can record as automation. You can carefully carefully edit this data after recording to get really precise changes in your sound.