How To Recreate the 1960s Abbey Road Drum Sound

Some of the greatest sounds in pop music history were captured in the magical Abbey Road. John Pickford highlights some easy-to-use methods to recreate those classic sounds yourself. The innovative sounds pioneered by the engineers at EMI’s Abbey Road Studios in the 1960s are still coveted by young musicians today. Here we’ll be looking at […] 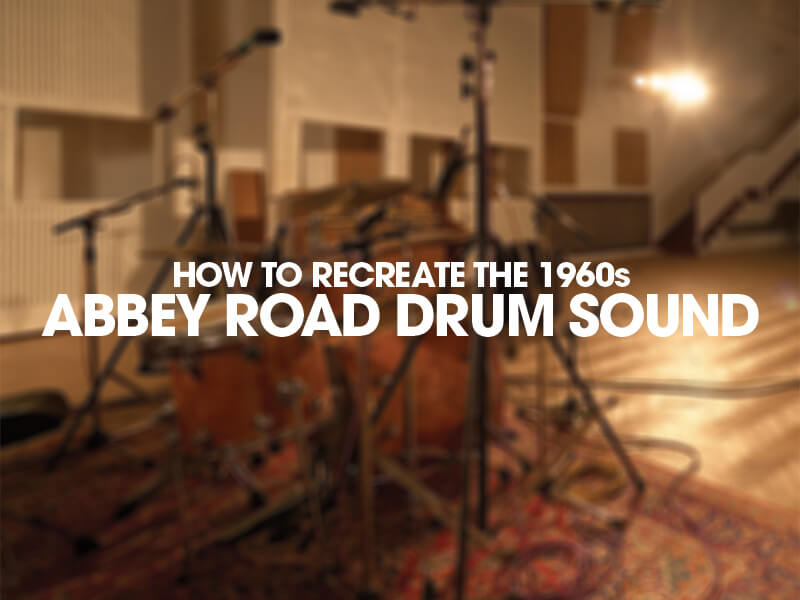 Some of the greatest sounds in pop music history were captured in the magical Abbey Road. John Pickford highlights some easy-to-use methods to recreate those classic sounds yourself.

The innovative sounds pioneered by the engineers at EMI’s Abbey Road Studios in the 1960s are still coveted by young musicians today. Here we’ll be looking at how to create the vintage Abbey Road drum sound, employing the same classic techniques. Of course, you could simply buy Native Instruments’ Abbey Road 1960s Drummer – but that would be cheating!

Ringo Starr’s sound on The Beatles’ groundbreaking recordings is the most famous of all Abbey Road drum sounds, however many other recordings were made utilising these techniques, including early albums by Pink Floyd as well as several classic psychedelic and prog albums.

Before I guide you through the methods, let’s take a look at some of the gear needed, including some faithful recreations of the original EMI equipment available, in both hardware and software formats. Assuming you have a lovely old 1960s drum kit to record, you’ll need a good bass drum mic, such as the AKG D112, a descendant of the AKG D20 originally used, as well as several all-purpose dynamic types.

Abbey Road engineers favoured AKG D19c mics for drums, however any decent dynamic cardioid, such as the ubiquitous Shure SM57, should do the trick. Chandler Limited manufactures a range of official vintage EMI gear including the REDD.47 mic amplifier, which has that authentic valve sound of the EMI REDD.51 console.

How to recreate the Abbey Road drum sound: step-by-step

1) In the early 1960s, drums were recorded using only two mics: an overhead suspended around 1.5m (almost 5′) above the kit, along with a mic placed 8-10cm (around 3-4”) from the front bass drum head. This basic set-up, along with processes described later, captured the early beat groups (and the ‘Beatlemania’ sound) in glorious mono. Splashy hi-hats and riding the crash cymbal ruled the day!

2) From the mid-60s, around the time of The Beatles’ Revolver album, a third mic was used underneath the snare drum for added snap. A small-diaphragm condenser mic is best for this task, however a bright sounding dynamic type should suffice. Also around this time, extra damping was used in the bass drum for a tighter sound. A lower position for the overhead mic – around the drummer’s head height – is better for a mid-late 60s sound.

3) A mono mix of these three mics should be created and sent to a Fairchild compressor/limiter. Universal Audio’s UAD plug-in is ideal for the job. Mix the drums into the compressor using its fastest pre-set (1), pushing the kick drum hard so it attenuates the overhead and snare mics, creating the dynamic, propulsive sound heard on tracks such as The Beatles’ Tomorrow Never Knows and Rain.

4) To mimic the Fairchild using a different dynamics controller, select your most aggressive compressor and set the ratio high – 8:1 and above. Use a medium-fast attack time and a release time as fast as you dare, depending on your compressor. Many VCA compressors can get close to the smashed sound of a Fairchild, however Variable Mu designs can often be overly smooth and gentle for the job.

5) Heavy compression/limiting can dull the transient response of the drums. The squashed sound is best livened up with a high frequency EQ boost. A favourite of Abbey Road engineers was ’10 at 10′; that’s a 10dB boost at 10kHz. Any good shelving equaliser should be able to produce the necessary top-end boost

6) As pop music became more complex during the psychedelic era, so did drum mic’ing techniques. At the start of the sessions for Sgt. Pepper’s Lonely Hearts Club Band, engineer Geoff Emerick employed extra dynamic spot mics on the tom-toms and hi-hat. Place the rack-tom mic underneath the drum pointing at the resonant head at a distance of 8-10cm (3-4”), with a similar distance for the mics over the floor tom and pointing horizontally towards the hi-hats.

7) Close mic’ing can produce a boomy tom-tom sound. To tame this, try a thin tea towel placed over the batter head. Many tracks on The Beatles (aka The White Album) and the Abbey Road album itself employ this damping technique. Ringo sometimes used a tea towel on the snare as well for a bone-dry sound. Other times he used a cigarette packet or wallet for subtler damping.

8) To add some ambience to the dry sound use Abbey Road’s filtered reverb technique. Roll of frequencies below 600Hz and above 10kHz before sending the drum mix to your reverb. A vintage plate or chamber is the ideal choice of reverb. A short pre-delay is effective and simply achieved by printing the reverb signal and moving it slightly ahead in your DAW.

9) In 1968, Abbey Road went from 4-track to 8-track recording. As overdubbing became more frequent, the initially recorded drums could become buried in the mix. To overcome this, an overdubbed snare drum track was recorded. This produces a nice, thick double-tracked sound as heard on tracks such as Yer Blues from the White Album.

10) The vast majority of drum tracks recorded at Abbey Road in the 1960s were mono; however early stereo mixing techniques often had the mono sounds widely panned. For that wacky 60s stereo sound, try panning the drums to one side, with any additional percussion – tambourines were commonly used on records from the 1960s – panned to the opposite channel.

Click here for more How-tos and the latest tutorials