How to perform live with Reason 10

Ever wanted to get on stage and take your Reason tunes out live? The software has some fantastic features to help you do just that. Here, we explore how to get a great live keyboard rig and explore some of the DAW’s performance options… 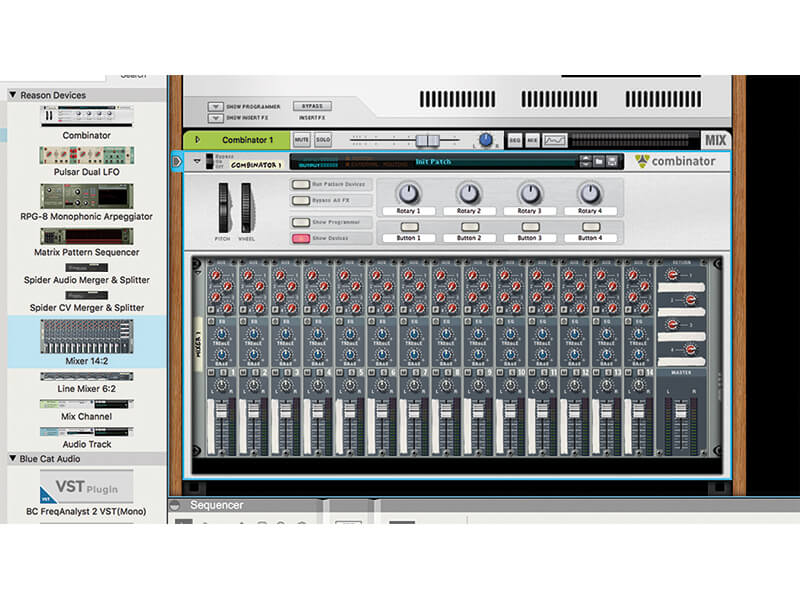 Getting your music out there and playing live has become increasingly essential as the way music is consumed changes almost month-by-month. More people are making music than ever before, but fewer are paying for it in the traditional way, so you need to find other ways to raise your profile – and building a live following is one of them.

Reason is obviously a great DAW for music-making, but is perhaps not always seen as an option for live performance. This is a shame, as there are many features within it that lend themselves to the live arena. Even if you use another DAW, you could consider using Reason as your live outlet, especially as it now plays VSTs and runs as a relatively lightweight option in terms of processor strain. And as you can probably guess, anything that lessens your CPU load on stage has to be a good thing.

There are so many ways that you can use Reason on stage, but for this workshop, it’s probably best to focus on just a couple, and these really depend on the type of gig you are putting on. Will you be playing the extensive keyboard sounds available in Reason, or will you be simply playing back your songs? This is the kind of choice that a lot of studio-based musicians have to face when going out and playing live – whether to be seen actually playing or to simply press play. Or you could bring in a performance element by either occasionally playing lead melodies, or using a controller keyboard to subtly and not so subtly change a sound, arpeggiation or note in a song. This will at least bring some kind of expression to your performance…

Either method is fine – you’re doing something on a stage, which is the point – and, fortunately, Reason has plenty for both scenarios (or a combination of the two). We’ll start by looking at how to set up a rack for players so that you can take your favourite VSTs out live and then look at some of your performance options. Reason might not be set up to give you as much clip-launching fun as some other software, but there is still a great deal of joy to be had within it, and there are one or two workarounds that you could try exploring with some of the older devices.

First, we’ll look at how to create a live rack that will enable you to play along with a backing track or play different solo sounds when changing songs in your live set. Older readers might have used synth-hardware racks in the past, where you effectively set up groups of multiple instruments, perhaps split across a keyboard, with one set for each song in your live set. When one song ends and before the other begins, you would switch between saved multi sets and be ready for the next song. This is effectively what we’re going to set up in Reason, but rather than just using multi setups with presets sounds from the same synths, we can use any presets from any of our favourite synths. Nice!

We’re going to do all of this within the lovely cosy security blanket of the Combinator. Regular readers will know that we use the Combinator in just about everything, as it allows you to set up mini versions of many studio situations. You can make adjustments to multiple parameters in different instruments with one control, for example, or in this case, set up sub mixes between all the sounds you want to play in your live setup. Anything you can do in a Combinator can be saved as a preset and you can easily switch between several of these when you switch between songs.

So far, we’ve shown how to play different keyboard setups live, but if you’re not a keyboard player, then don’t worry, there are other performance types that Reason will help with. Consider triggering beats or other audio live with pad controllers. You could then, for example, use a similar Combinator patch for some of your drum or sampler instruments. Some controllers will allow you to easily access synth parameters, too, so you could tweak filters for effect. Finally, we’ve included a quick guide using Dr. Octo Rex to trigger different parts of a song live, introducing some more creative elements to your live gig. Enjoy your live Reason outings and let us know how you get on!

Getting on stage with Reason: step-by-step 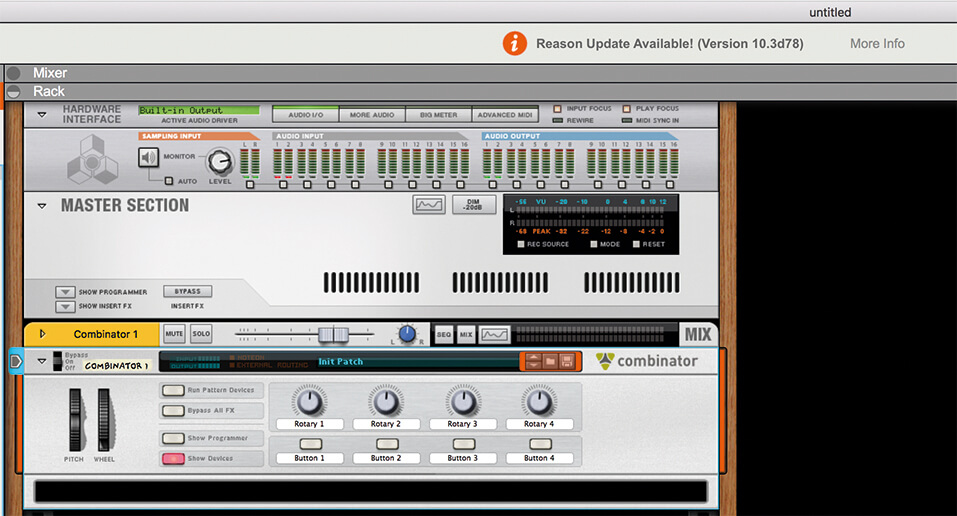 1. It’s the good old Combinator again – possibly Reason’s greatest device, as it does (kind of) allow you to set up loads of mini applications of Reason, within Reason! Here, we’re just using it to set mix levels of our multi live sets. 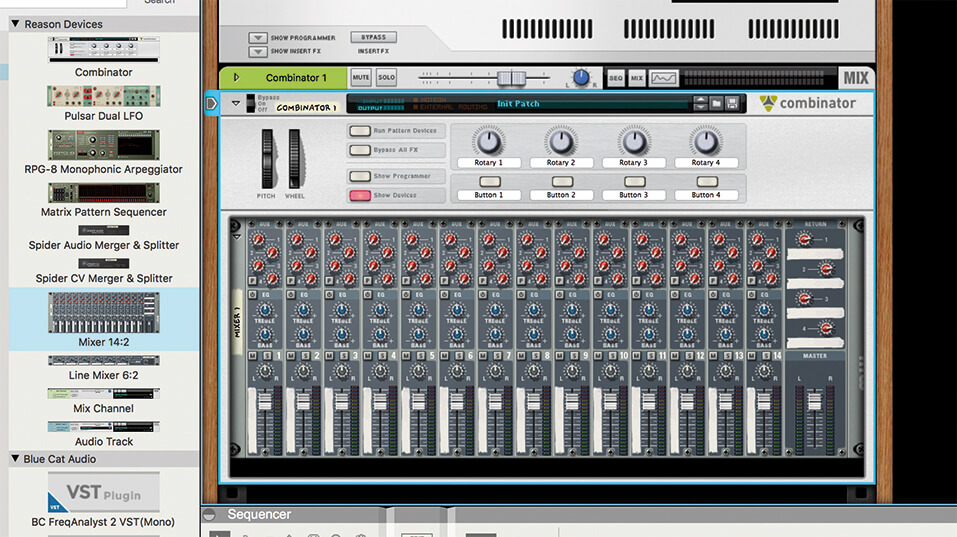 2 . Drag in a mixer. We’ve used the Mixer 14:2 to make sure we have enough inputs for our favourite synths (although you probably won’t be playing that many at one time). Hit the Combine option, which opens the Combinator. 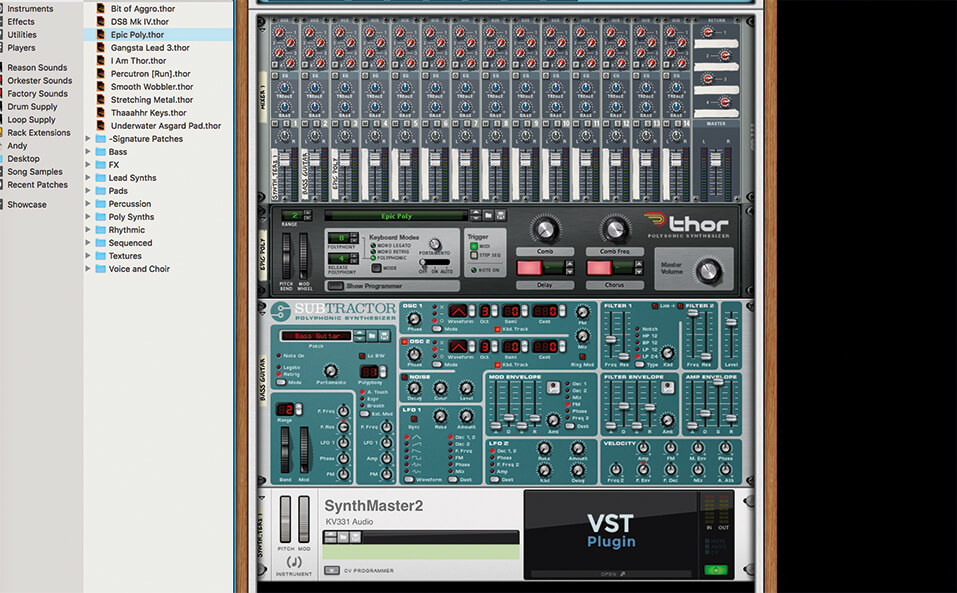 3 . Talking of favourite synths, now it’s time to drag some favourite Reason instruments or VSTs into your rack, all ready to set up as multi live set. Here we’ve taken a couple of Reason synths and a VST. You choose whatever you like. 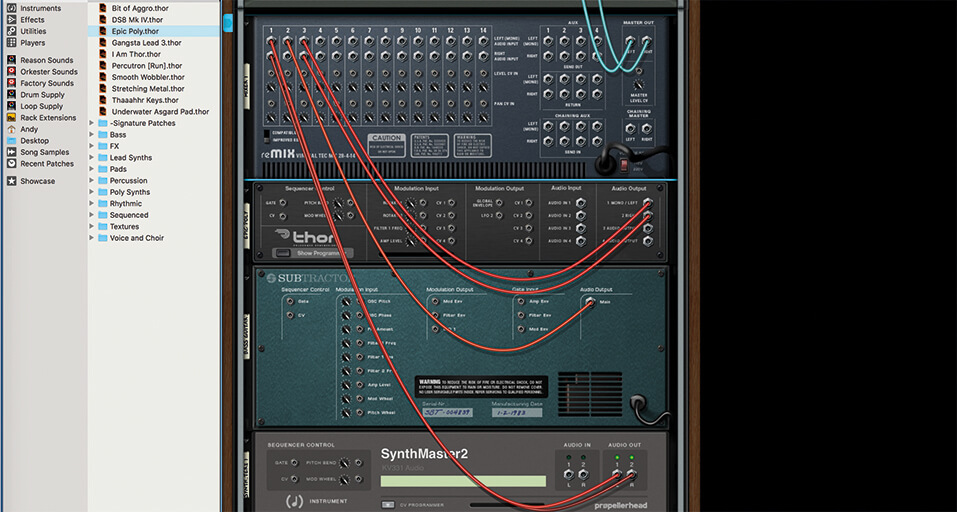 4. Reason automatically assigns your instruments to the channels, as usual, in this case the first three. You can spread things out if you wish (press Tab to get to the channel wiring) but it’s probably best to keep it simple at this stage. 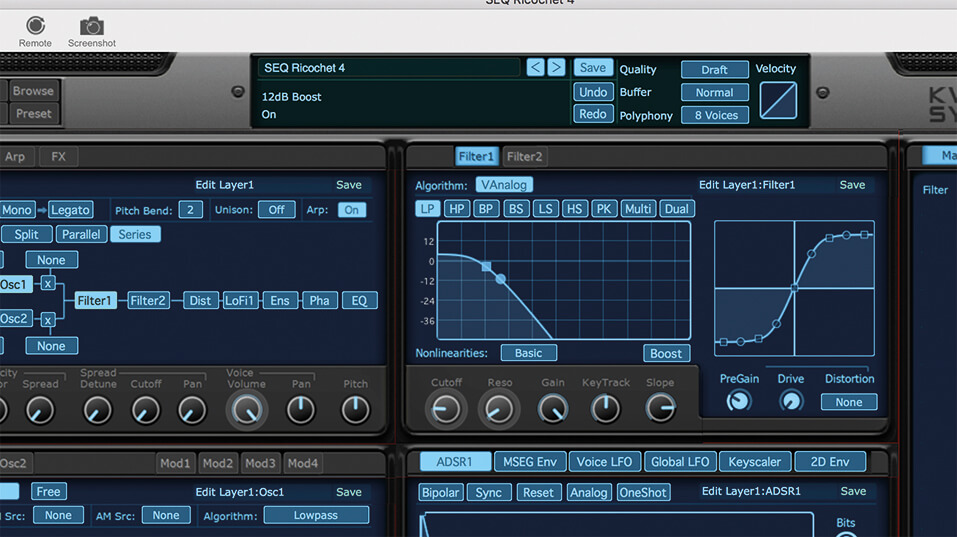 5. Now you select the sounds you’ll be playing in your live set. These will be the ones that you want to play live over a backing track (or solo on their own). We’ve chosen a beat sequence and a couple of leads as examples. 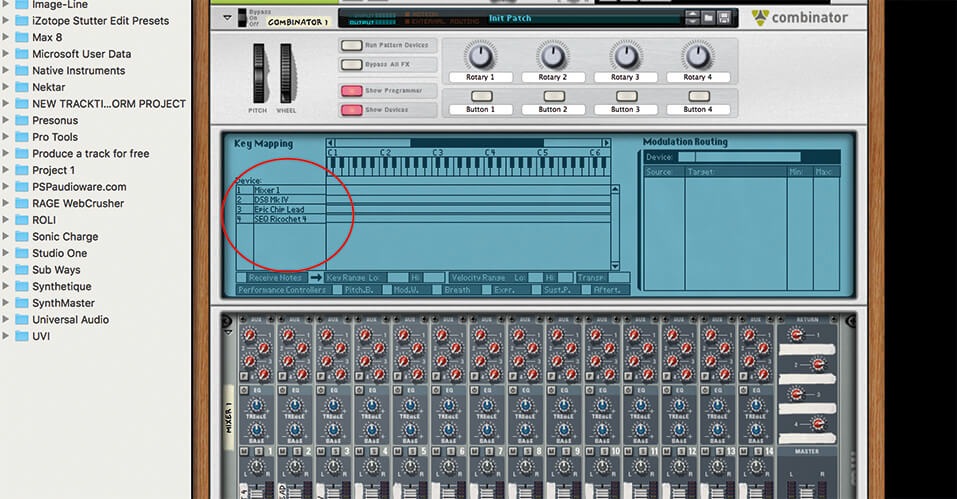 6. They will all be playing at the same time, like a big combination. No problem. Now it’s time to open the Show Programmer option on the Combinator and all three presets will be listed.

CHECK YOUR INTERNET You’ll need to use Reason in Authorized Mode to load in any songs which, for ease sake, means getting access to the internet on boot up, so make sure your gig venue allows this. If not, you can authorise your computer so you can get up and running without the net. 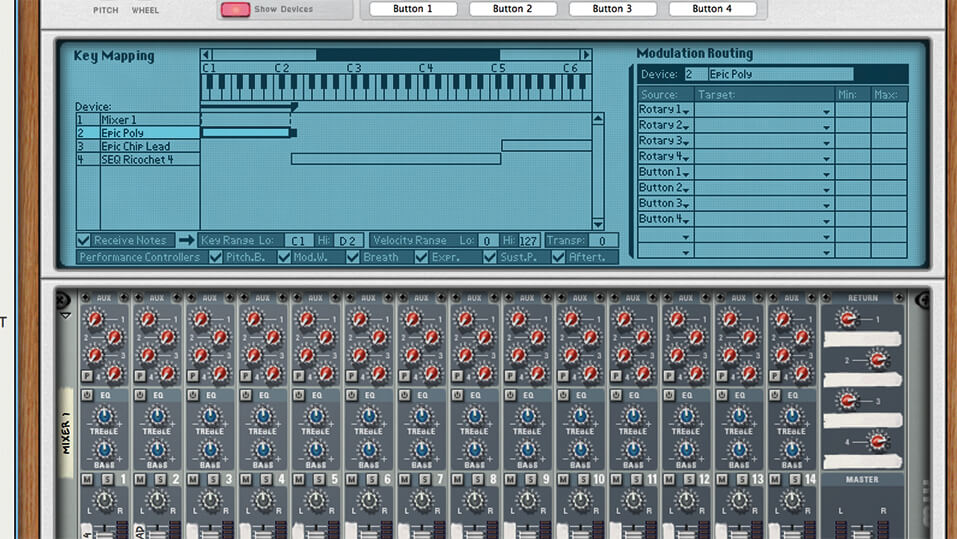 7. Now place different sounds on different key ranges in Combinator’s Programmer. You could have the bassier sound on the bottom of the keyboard, the lead at the top and the sequence in the middle as shown. 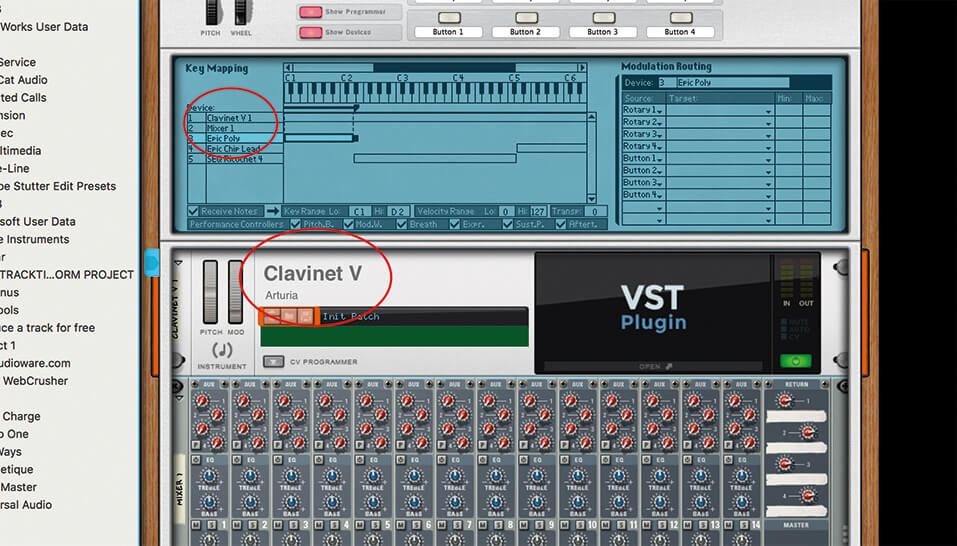 8. If your song is more complex, then you could always add more presets from different synths – simply drag them into the mixer and they will show up in Combinator as above.

9. Then you simply save your Combinator patch and that’s one of your songs ready to play live. You could then play along with a sequenced song that you have loaded at the same time, no problem. 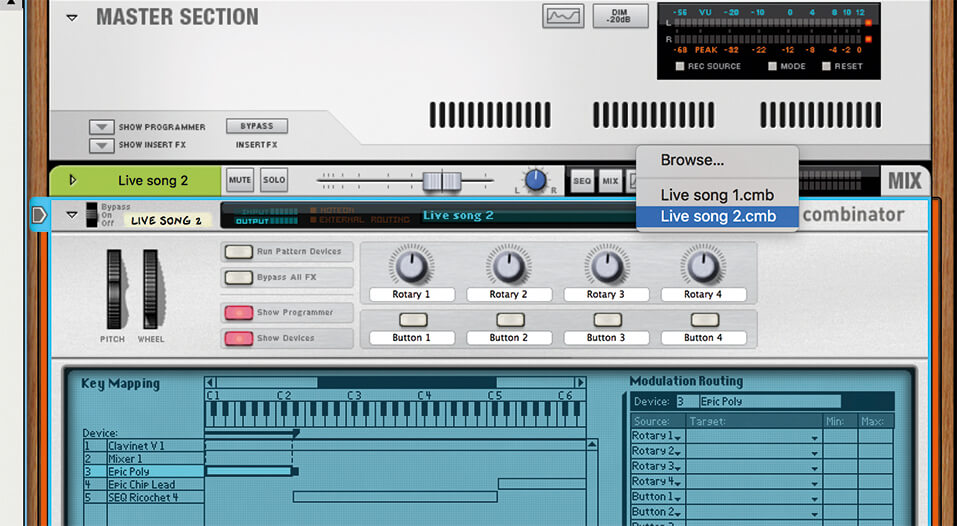 10. Repeat steps 1 to 9 for your next song in your live set and then save that. You can then simply select between live sets for different songs by clicking on the preset name. 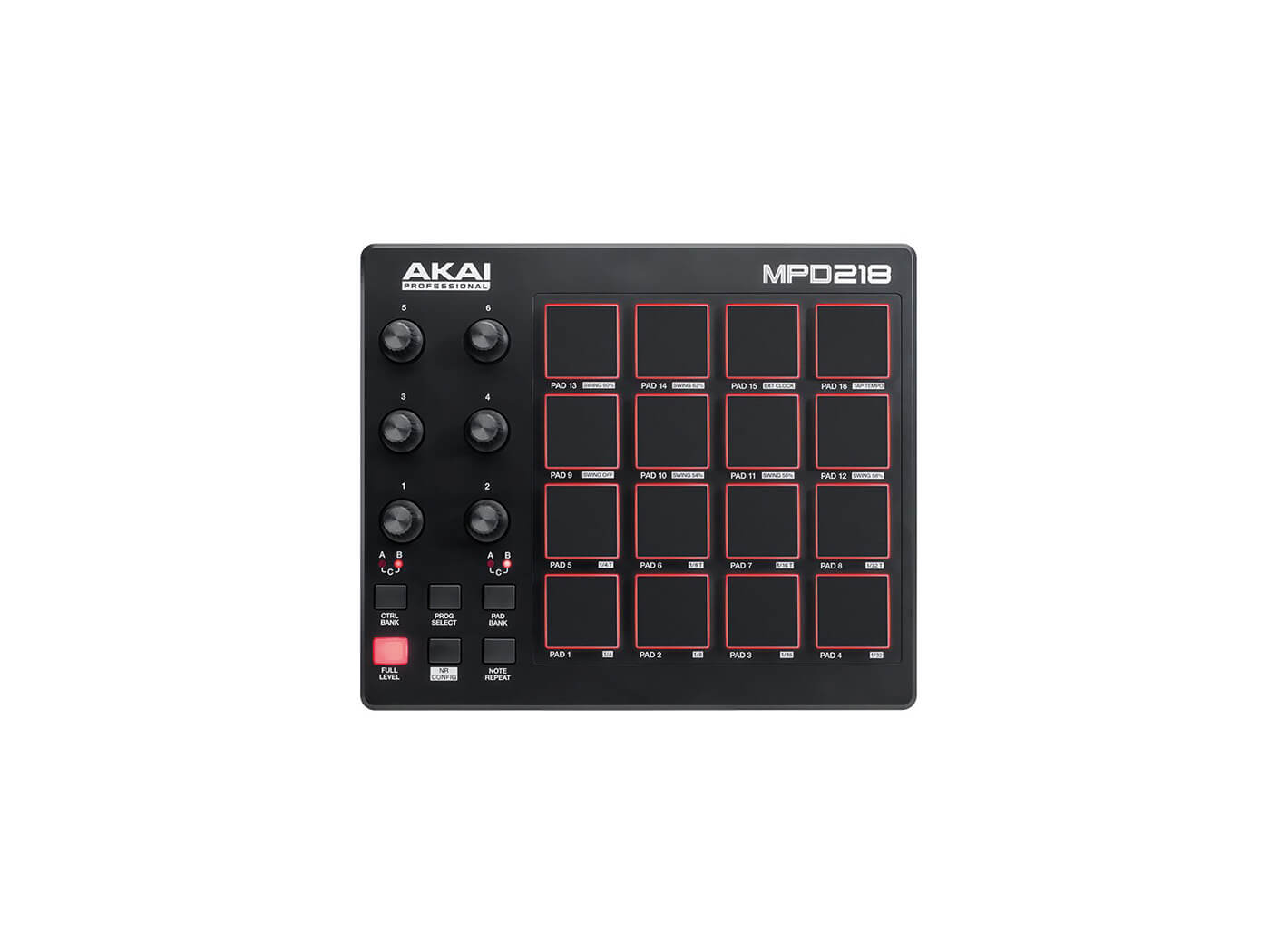 11. If you are not a keyboard player, then don’t worry, you can use these Combinator live-set patches for triggering beats or anything else. You should consider a controller with pads though, either dedicated or included on a keyboard. 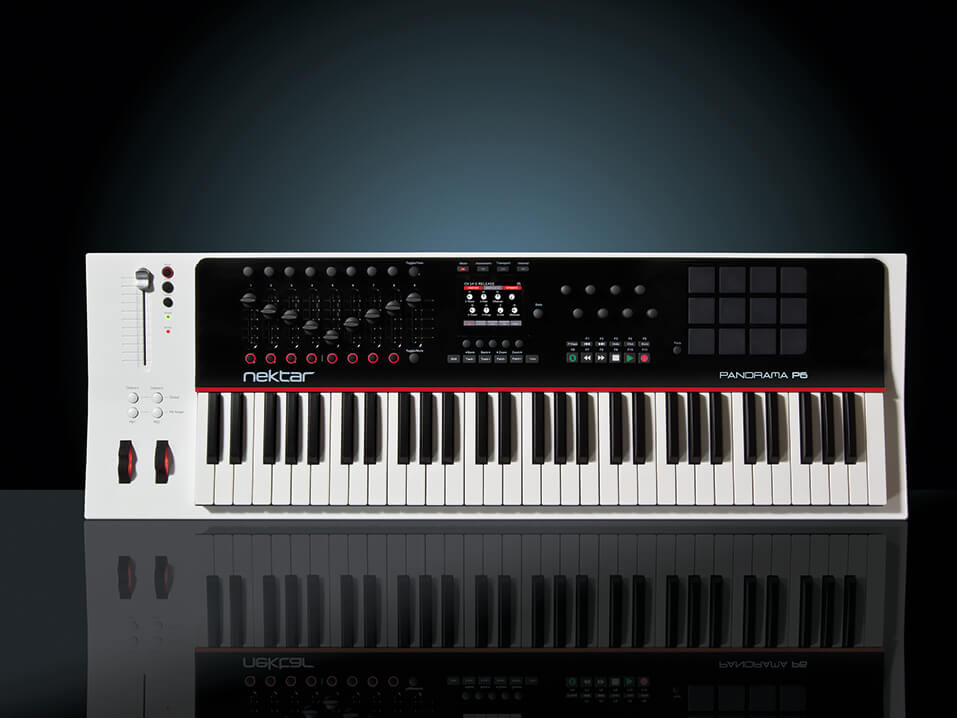 12. Nektar’s Panorama keyboard will also let you control parameters very easily on Reason’s synths, so again, you don’t have to be a player – simply turn some knobs while your sequences play ‘live’.

GETTING MORE LIVE-LIKE While Ableton Live is regarded as one of the best DAWs for playing live, the Reason community has come up with ways in which you can create some of its live functionality. The Dr. Octo Rex idea below is just one of many that are helping to bring the live side of Reason out. 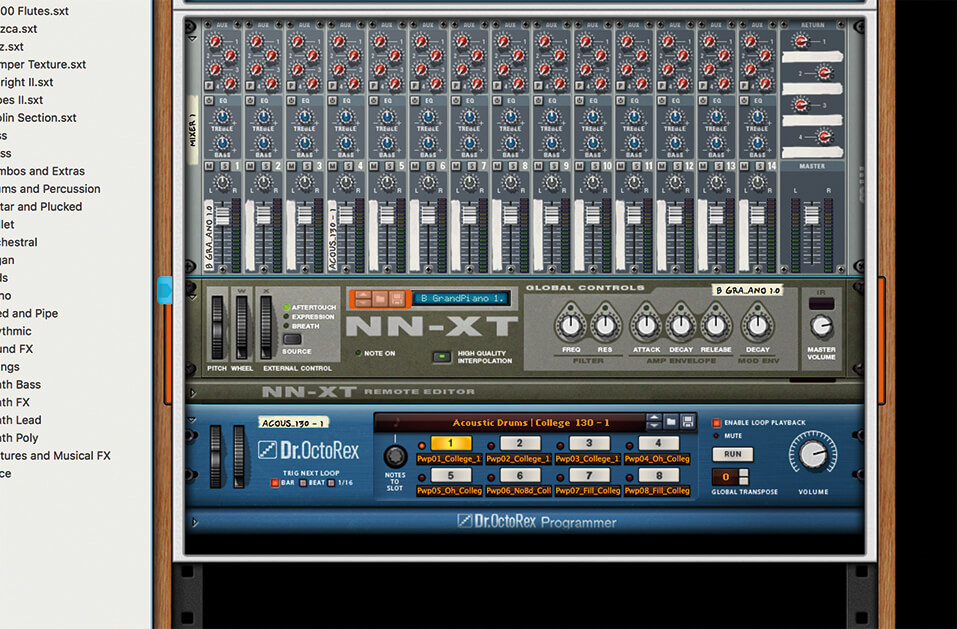 13. Taking Step 11 further, you can get very creative with a decent pad controller and audio in Reason, so consider using instruments like the NN-XT sampler and Dr. Octo Rex for more hands-on audio action. 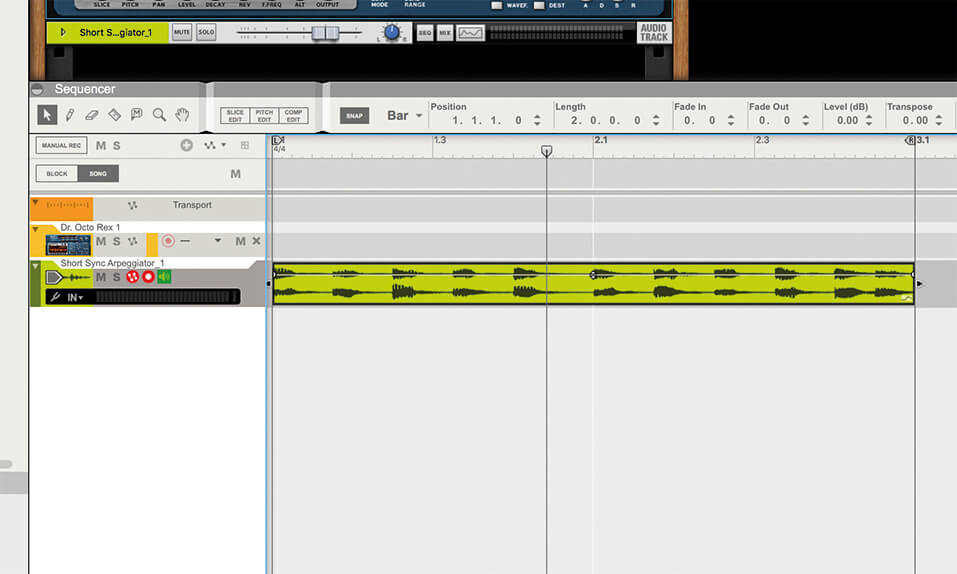 14. Here’s an idea for Dr. Octo Rex. As we explored in the last part, this REX file player is great for reordering and triggering audio, so you could use it for remixing different parts of your song, or track parts like the one shown. 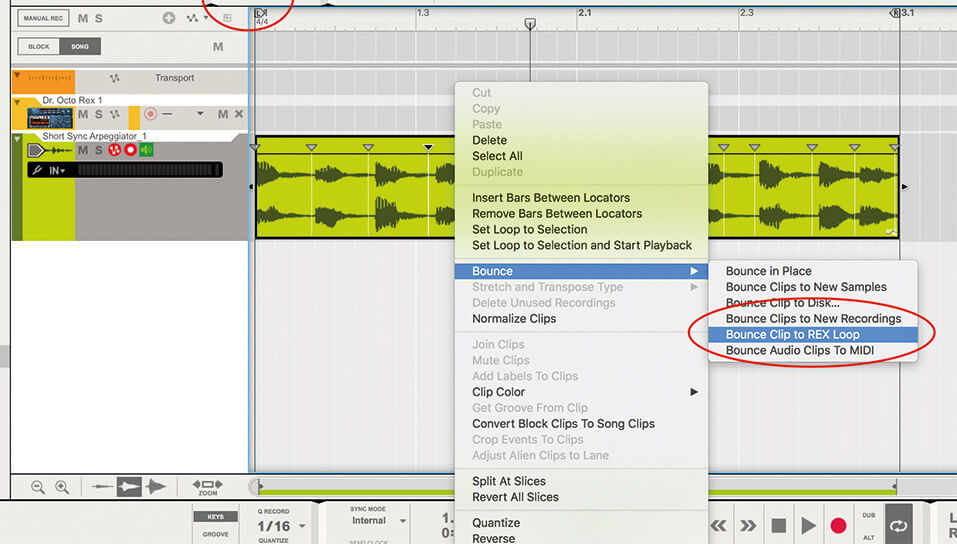 15. First, you’ll need to turn it into a REX file. Select the Slice Edit option on the player which turns it into slices. Then Ctrl/right-click on the file and select Bounce to REX Loop from the menu. 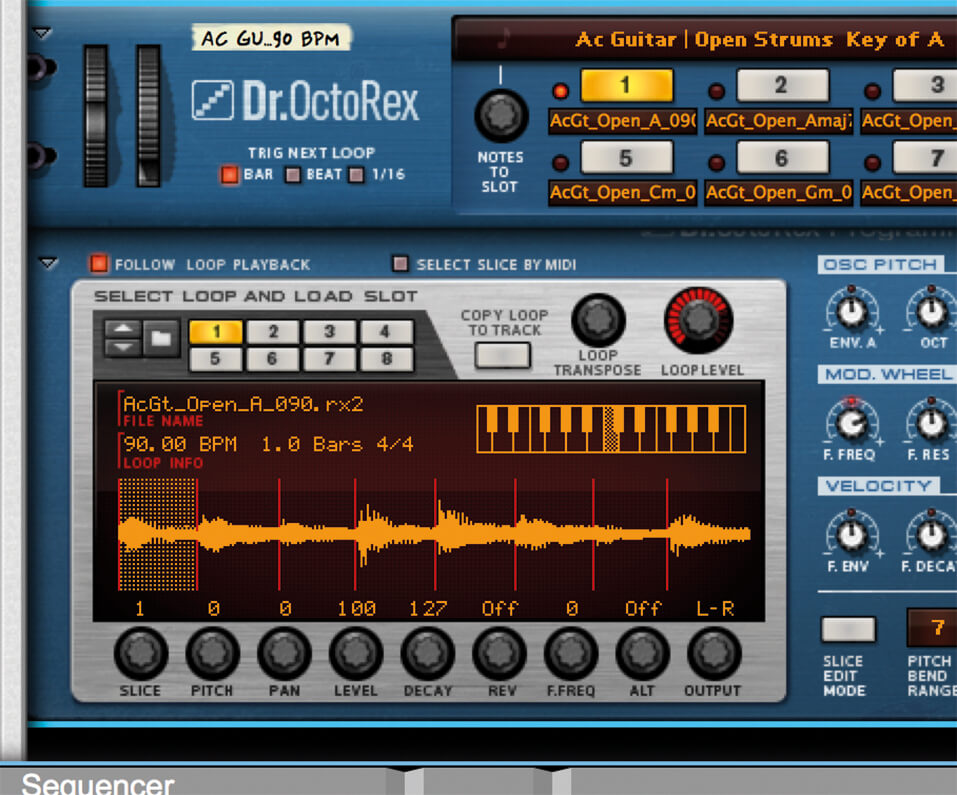 16. Now you take the REX loop you’ve just saved and load it back into Dr. Octo Rex. The instrument gives you loads of playback options. Hit the arrow at the bottom to reveal these, like reversing and repitching notes. 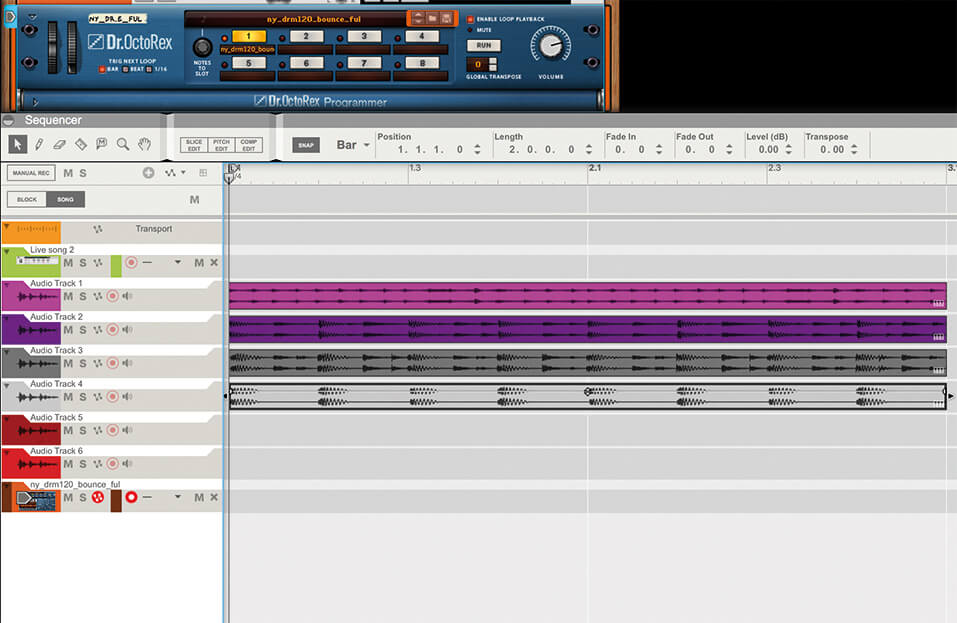 17. You could keep doing this on individual audio stems and set them up with a pad trigger for example, for some awesome live playing and song deconstruction… 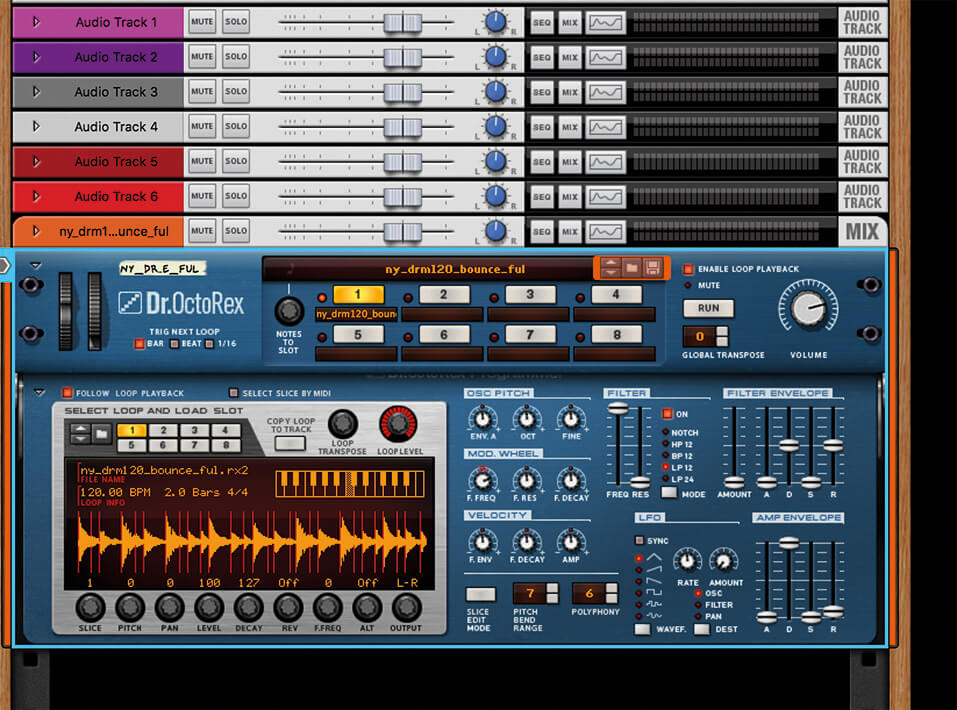 18. …or create the complete audio file of a song in your set as a REX file and trigger parts of it live. Okay, that might be taking it a bit far – but if you imagine it, Reason (usually) has the tools to realise it.