Deeper with Sweeper & Quartet in Reason 11

We check out the latest addition that came with the Reason 11 upgrade. 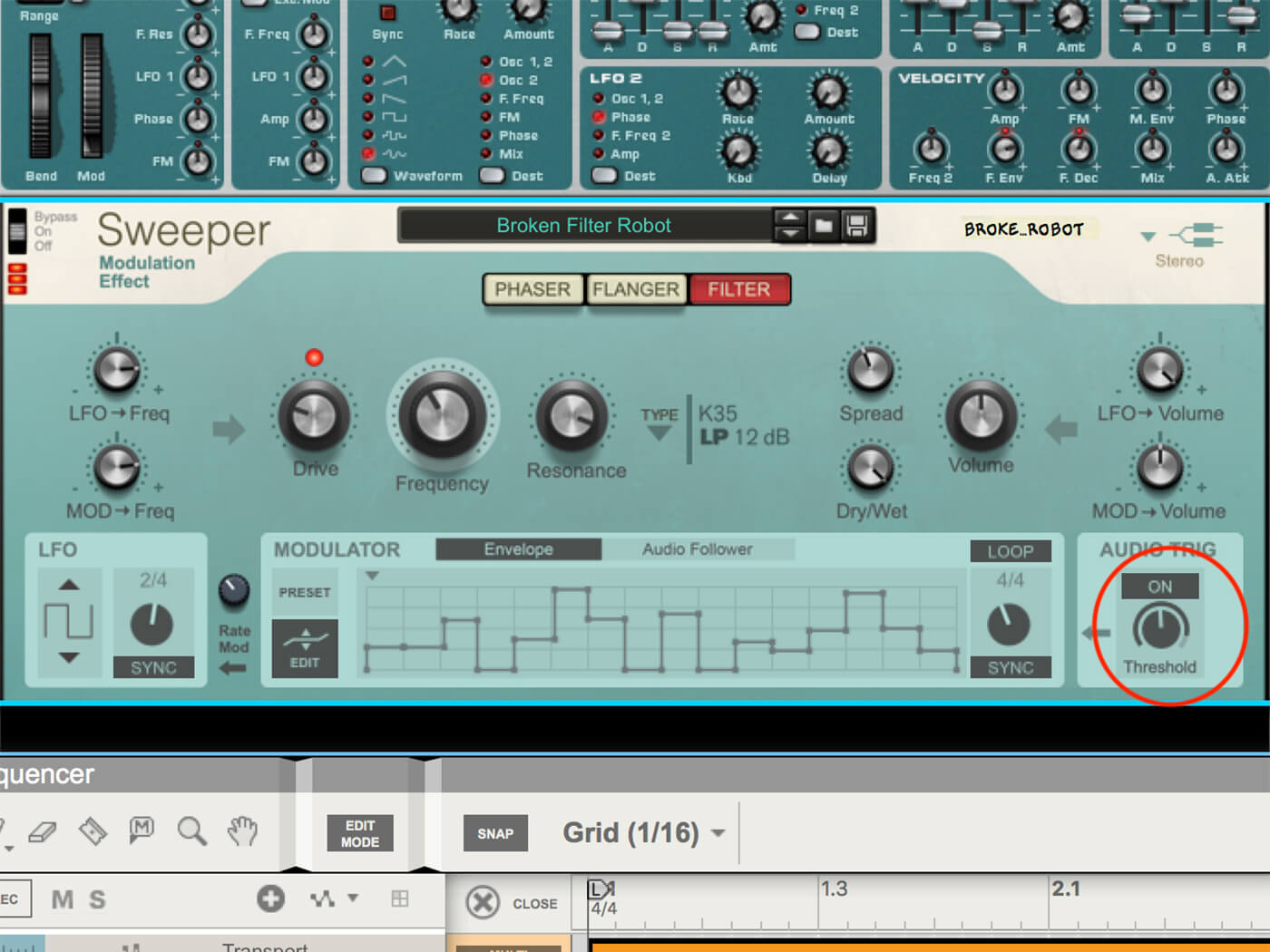 Reason 11 has been one of the biggest news stories in the land of music technology since its announcement a few months ago. The reason (sorry) that version 11 has made such an impact is largely down to the fact that the DAW – or the best parts of it – can now be run as what is now called the Reason Rack Plugin as a VST3 instrument (with AU compatibility promised imminently) in any other DAW. That means you get to run Reason’s many instruments and effects within a compact rack pretty much anywhere you like. Now you can enjoy the mighty Thor in Ableton Live (and soon Logic).

However, the news was bound to overshadow whatever else was announced in the Reason 11 upgrade, which is a shame, as there are some other wonderful additions, which we’re going to cover right here. And they might not be as headline-grabbing as that Reason Rack, but they might well have a big impact on your music-making.

Reasons to be cheerful… are 11

There were a number of pretty cool workflow enhancements in Reason 11 – some nice curved automation additions and the like – plus the software saw some of its classic pieces of outboard gear now available at Rack devices. The Master Bus Compressor, Channel EQ and Channel Dynamics, for example, are the same devices found in Reason’s mixer but are now in Rack form so they can now go anywhere in your Reason signal chain.

However, it’s the new effects boxes in the form of Sweeper and Quartet Chorus Ensemble that we’ll be focussing on here. Sweeper is a three-in-one effects box while Quartet is unsurprisingly four. However, surprisingly, Sweeper probably has more going on in terms of its ability to take a sound, and do anything from gentle frequency shifting to out-and-out mangling so our workshop focusses more on that than Quartet.

That’s not to say that Quartet is lacking – it’s actually packed to the rafters with very solid effects – but Sweeper is a surprise in terms of its flexibility and there is a lot of dynamic editing to be had.

Sweeper is a Phaser, Flanger and Filter all in one, which is not that hard a task as you might think as all three effects are all concerned with changing the filter characteristics of a sound over time. Consequently, all three of the effects share very similar controls – they all have a prominent Filter dial, for example – and they can all be modulated by way of an LFO and Envelope waveform. There’s also a very useful Audio Trig dial that only allows the effect to take place if the input signal exceeds a certain magnitude.

Largely speaking, the LFO and Envelope Modulator affect either or both of the filter frequency or the volume of the signal. The former is induced with either the LFO + Freq dial or MOD + Freq dial. It can result in anything from a gentle sweep of part of the frequency of the sound – at just 0.05 Hz if you like – to a metallic crunchy sound when you ramp up the frequency of the modulation, or dial up some of the more dramatic modulating waveforms.

The dials on the right hand side of Sweeper do the same thing, but this time to the volume of the sound. You get an LFO + Volume (which applies the LFO shape and frequency to the volume) and MOD + Volume, which does the same thing, this time by way of the Modulator Envelope. These latter two effects are more jittery and can also give you a lovely tremelo type effect, as we shall demonstrate in the workshop opposite.

The real beauty of Sweeper is that you can bring in a little bit (or, indeed, a lot) of everything: Envelope or LFO modulation of either or both the frequency and volume of the phasing/flanging/filtering.

Quartet is the second new effect we’ll look at, and while it’s not quite as feature-packed as Sweeper, it still has four Chorus modes: Chorus, BBD (Big Bucket Devide/Delay) FFT (Fast Fourier Transform), and Grain. These are essentially different ways in which the input signal – or parts of it – is delayed and repeated to give you that often swirling chorus effect. All four choruses offer very distinctive types of effect and, alongside Sweeper, Grain is a very useful tool in the now overflowing armoury that is Reason’s effects rack. 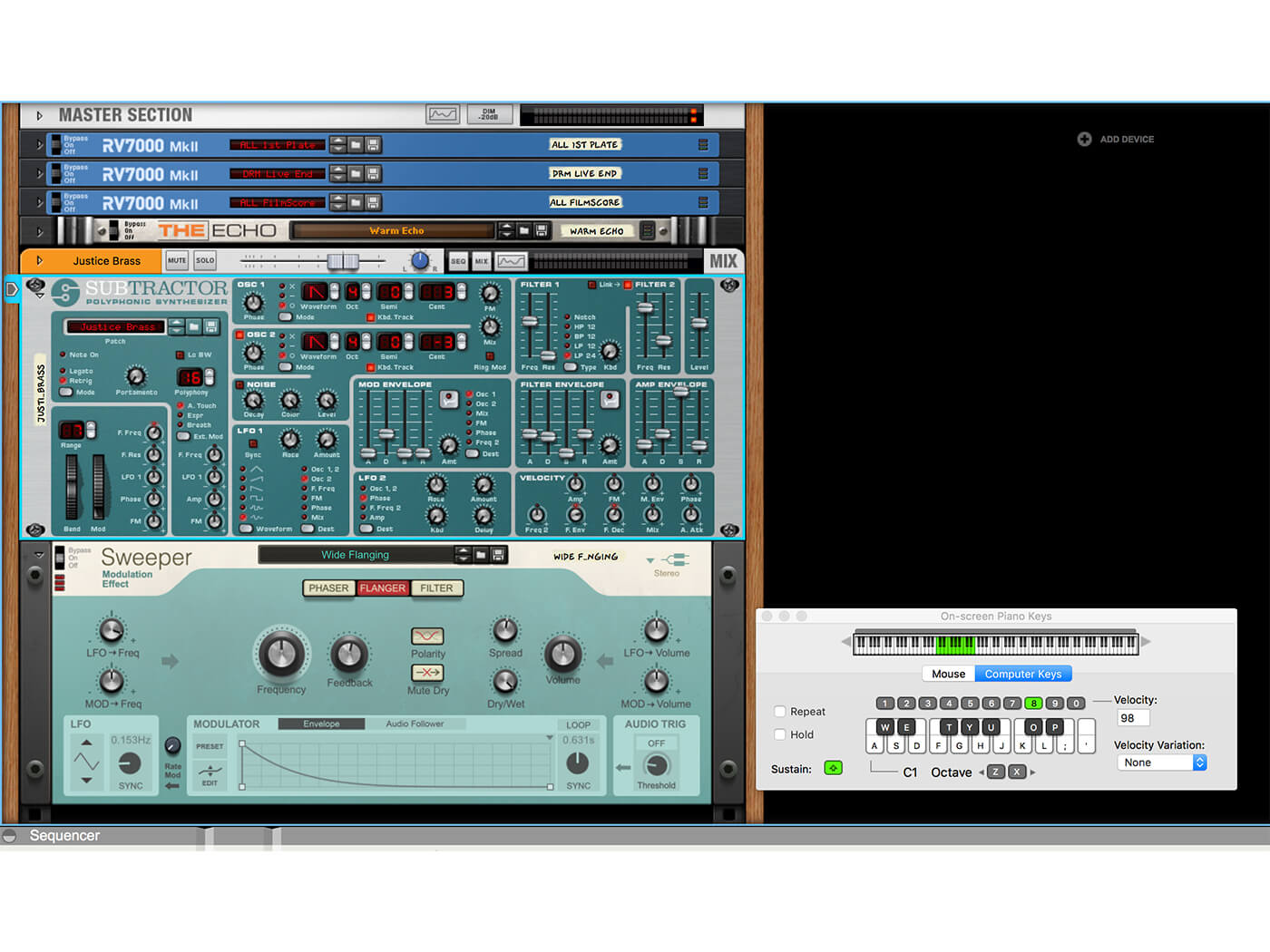 1. Load up a new Reason Project (from the File menu) or Cmnd+N (right click) and add an instrument of your choice and the brand-new Sweeper effect. We’ve chosen the Subtractor synth as our sound source. 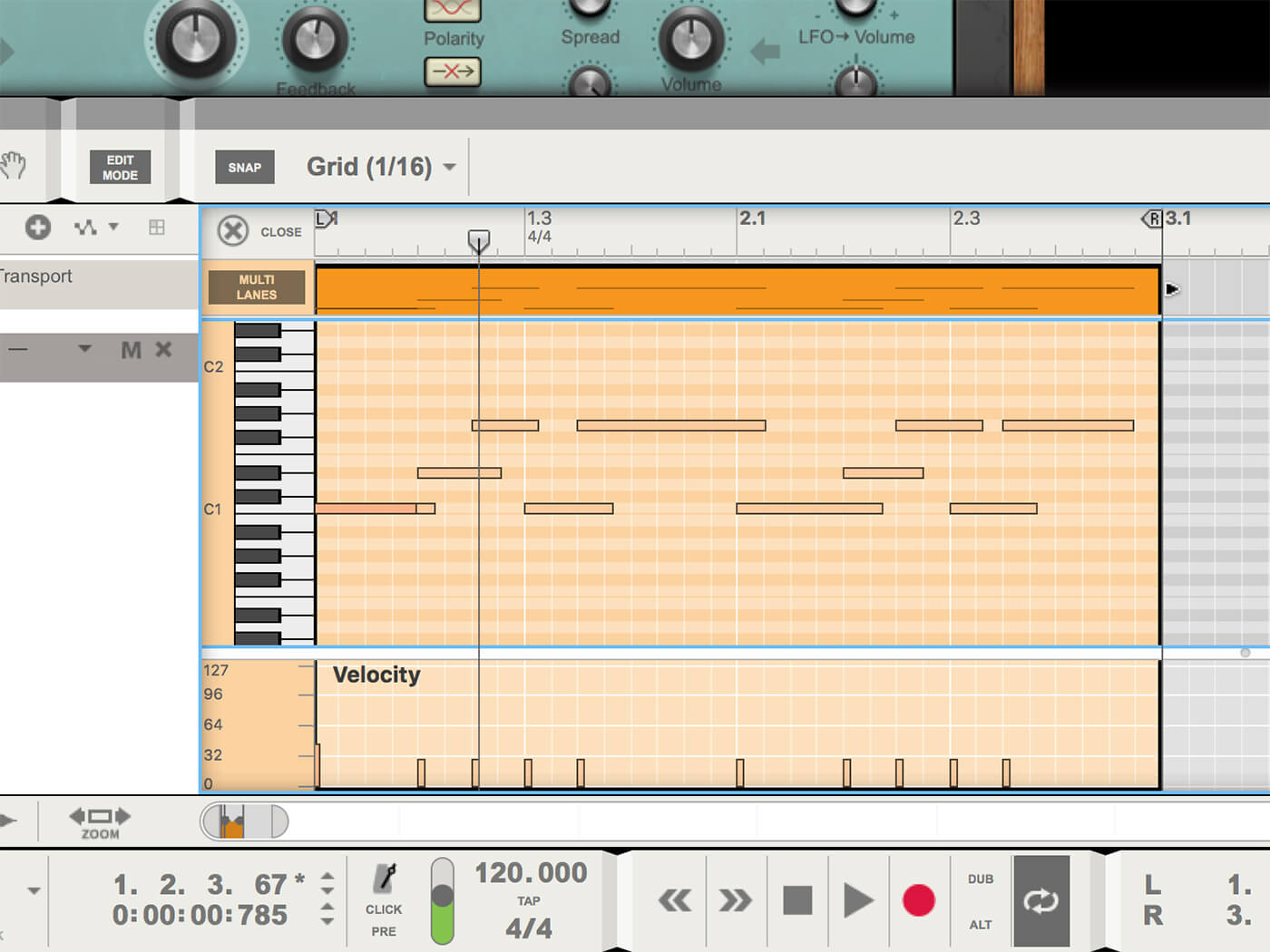 2. Add a simple riff to cycle around a couple of bars so you can start to learn how Sweeper can impact on your sound in real time. Choose a fairly basic sound to start with – we have an analogue brass sound. 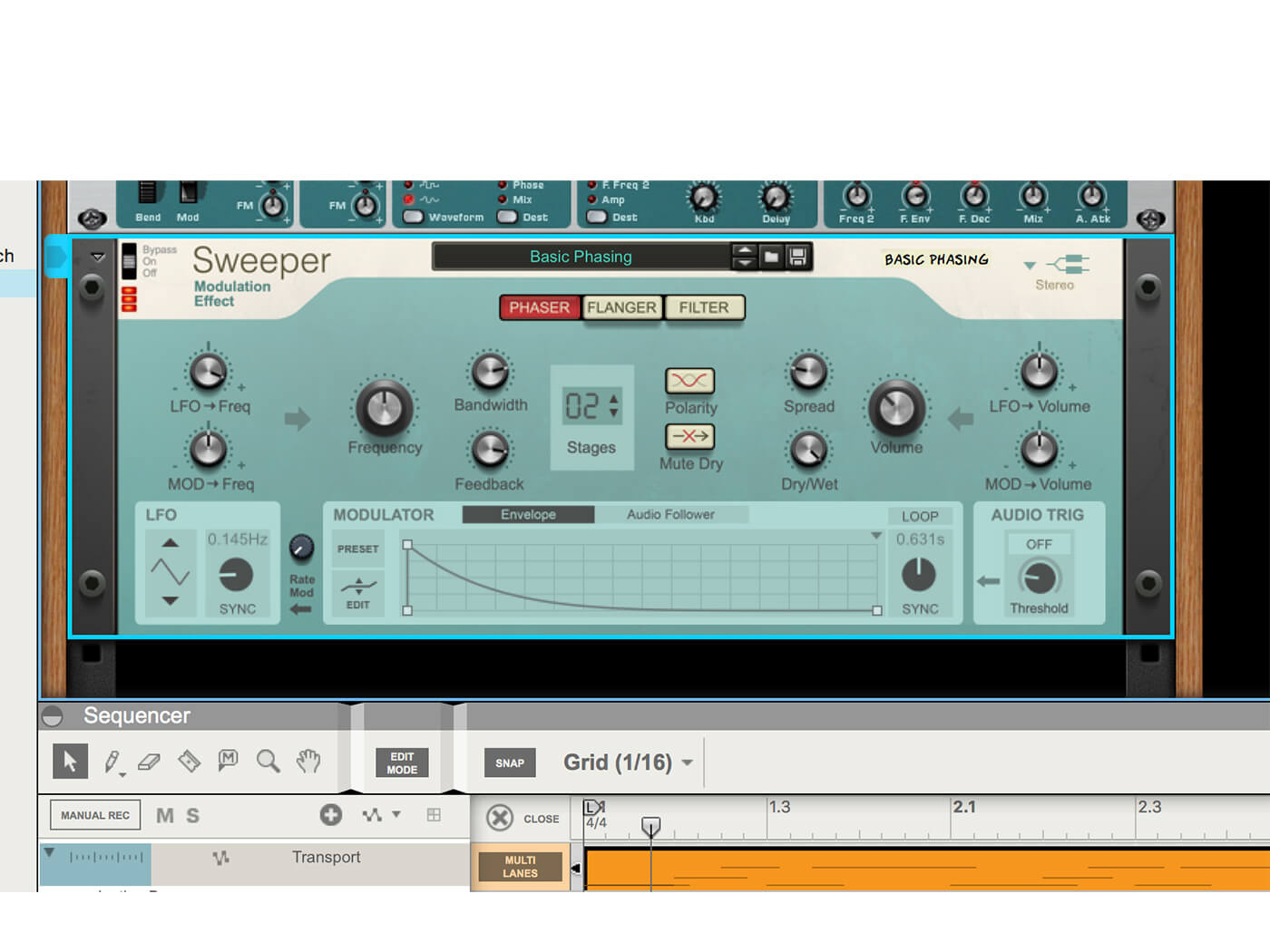 3. Now select Basic Phasing, one of the simpler Sweeper presets, to hear the gentle phasing effect in action. Here this effect is being mostly controlled and produced by the LFO (bottom left) which is set at 0.145Hz. 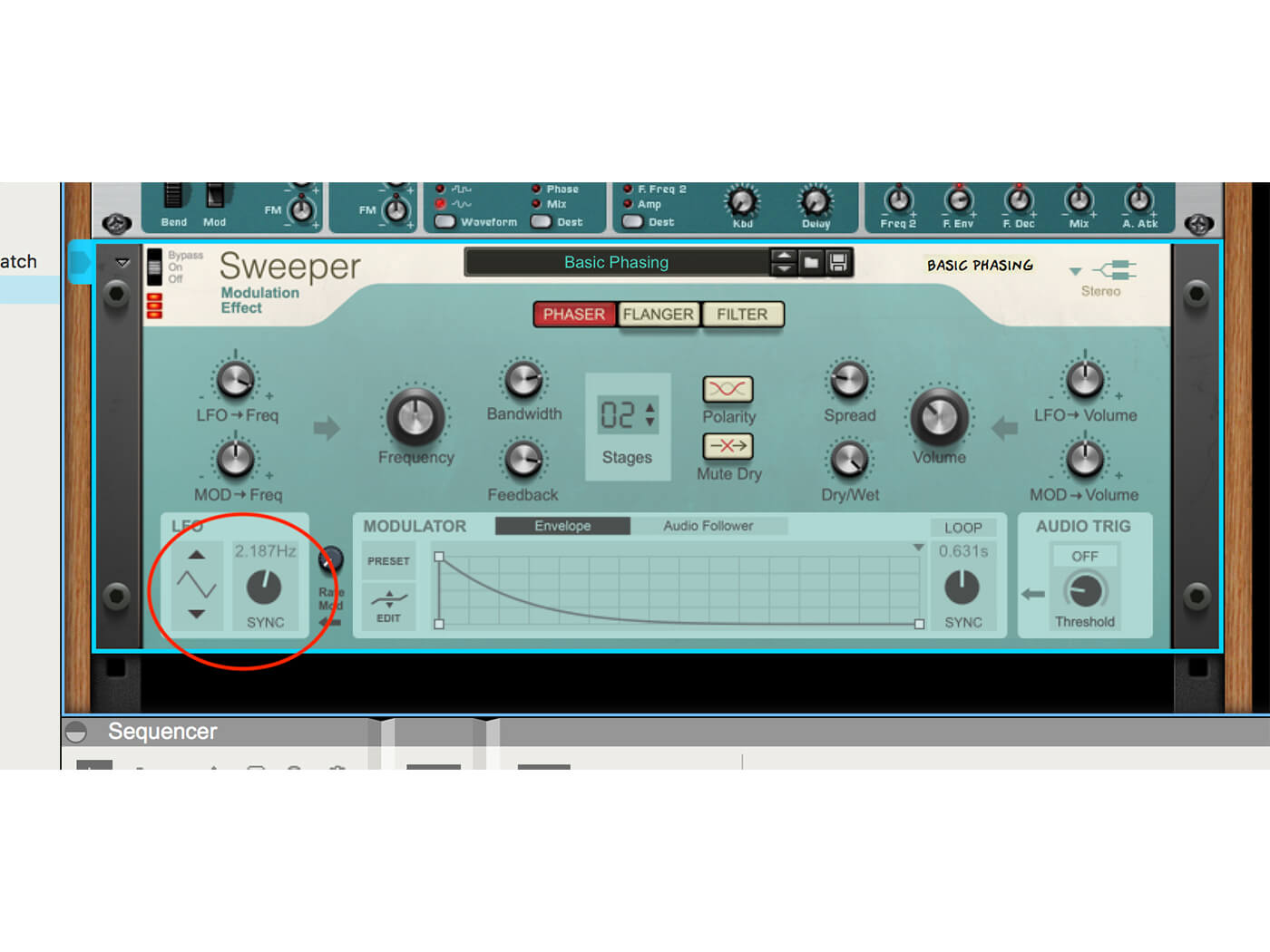 4. You can hear how this affects the phasing effect simply by increasing the Sync frequency. Gradually up this value to around 2.4Hz and you will hear the phasing effect cycle around at that speed. Any higher and it starts ringing. 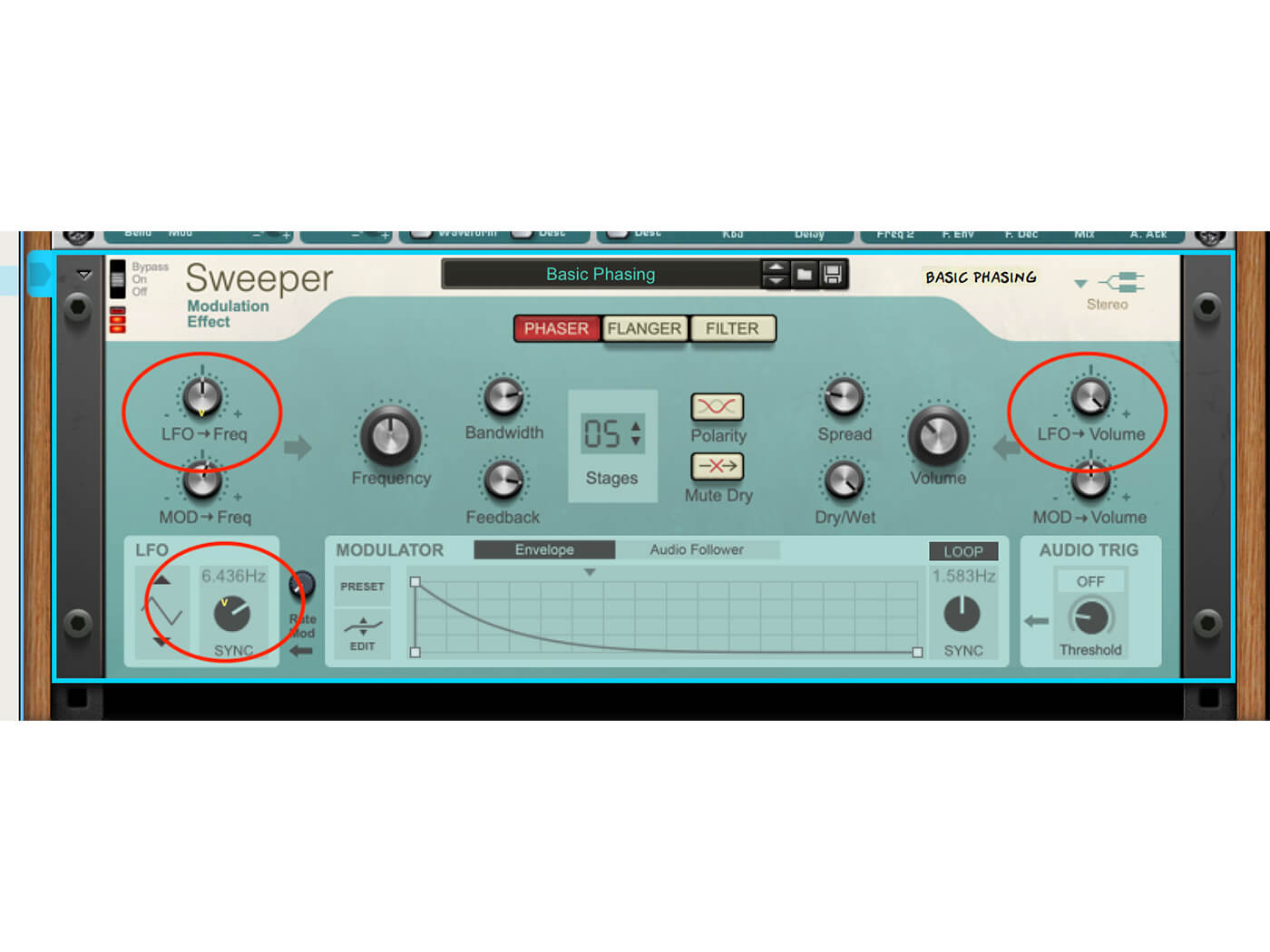 5. Now reduce the LFO + Freq dial to half and increase the LFO + Volume dial to maximum and the LFO frequency to around 6Hz. The LFO now audibly affects the volume of the sound, resulting in a tremolo effect. 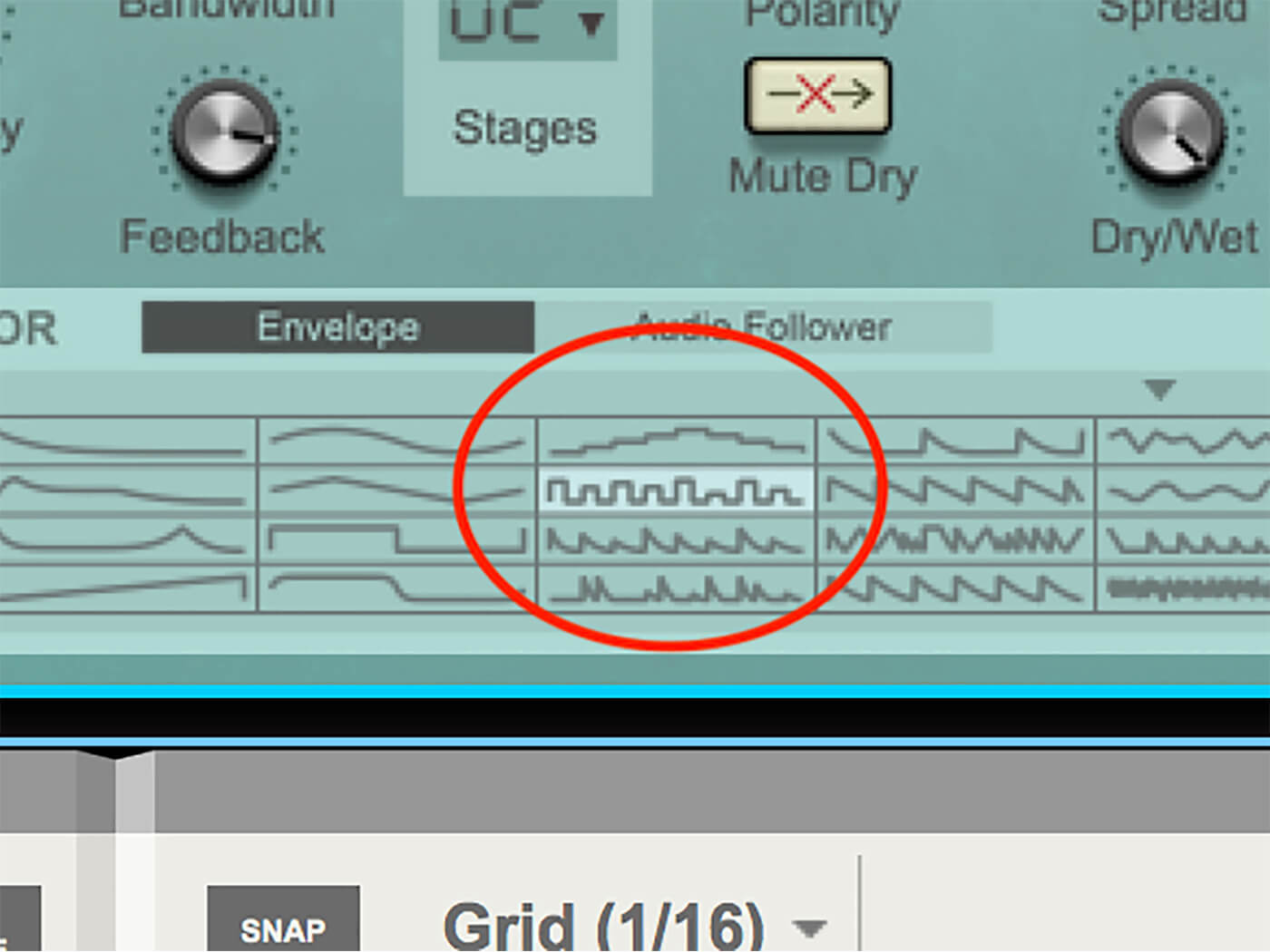 6. So far, we’ve just been applying the LFO to either the filter frequency of the volume. Now we’ll add in some further modulation by way of the Envelope. Press the Preset icon and load in the central waveform as shown.

IF YOU MISSED IT The big news in Reason 11 was the Reason Rack being able to run in any other DAW. In the last issue of MusicTech we looked at how you can run the Rack in Ableton Live. That tutorial, along with another one on some of the other new R11 updates, is now available at MusicTech.net. 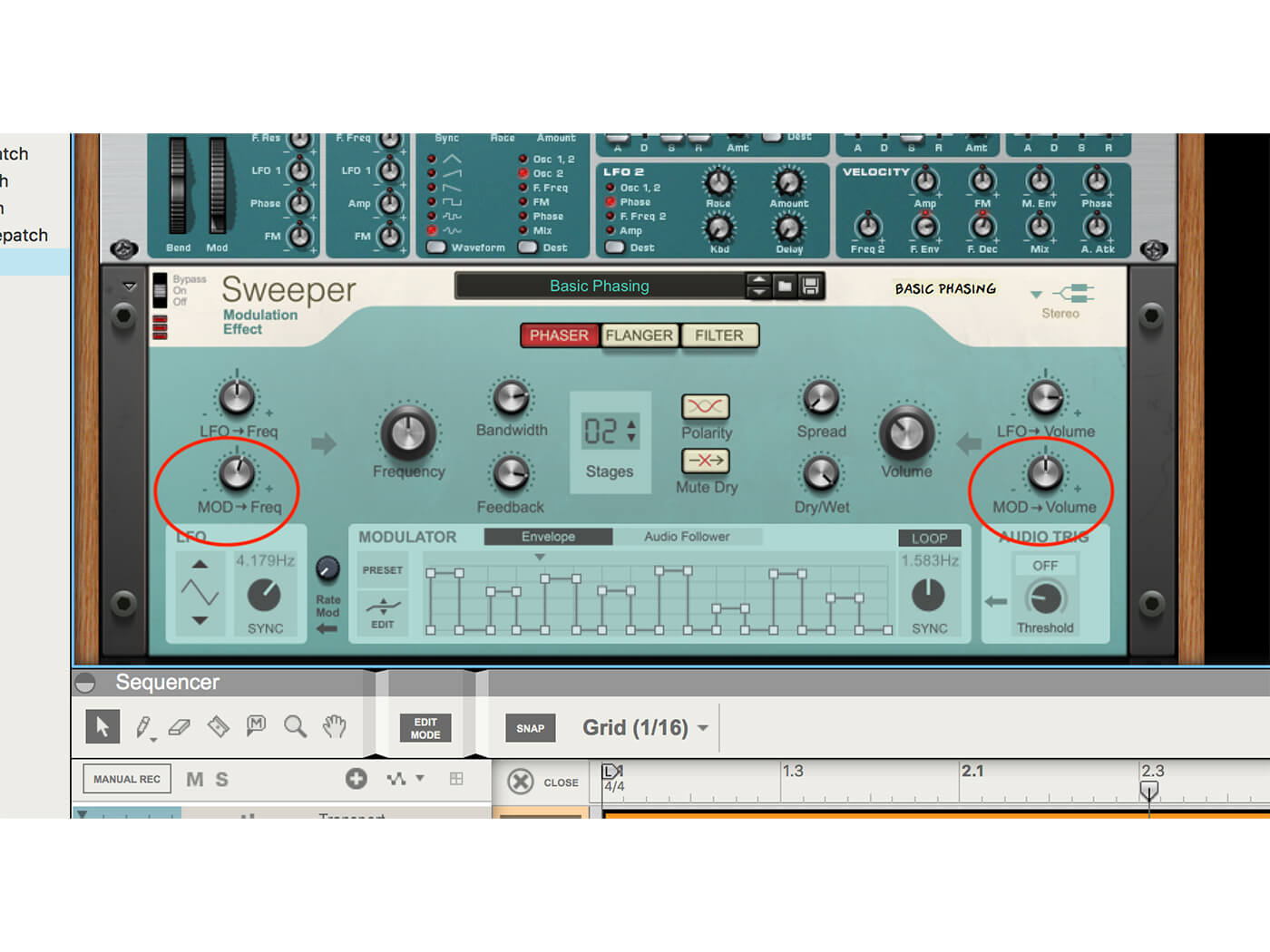 7. Now you have a dramatic waveform as your modulator you can hear it act on the frequency with the Mod + Freq dial or the volume with the Mod + Volume dial. Increase the rate with the Syn dial. 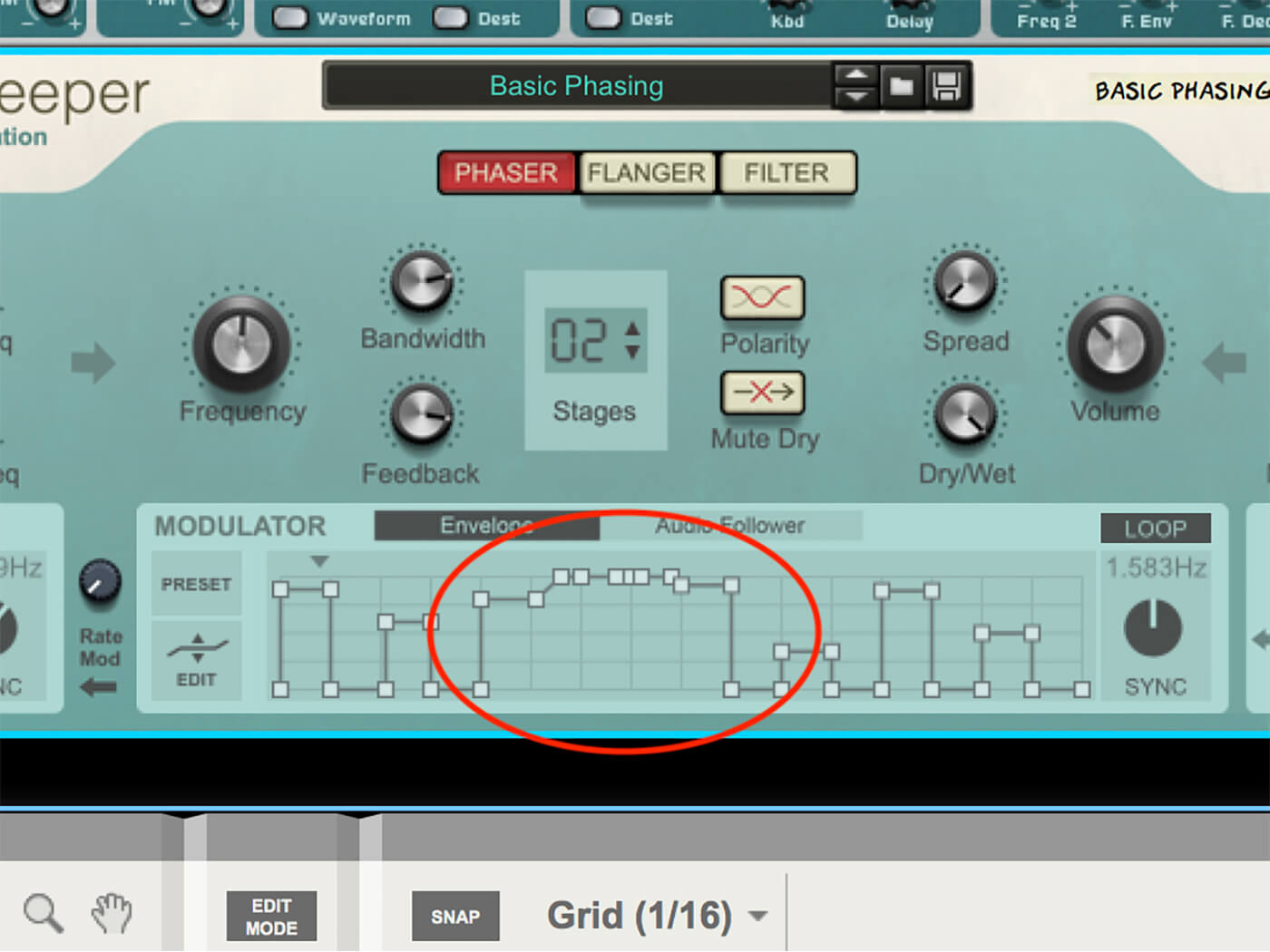 8. The shape of the modulating waveform is completely editable so you can drag any of the pointers up or down. Here we’ve dragged the middle section ones up and you’ll hear both volume or frequency remain in place over this part. 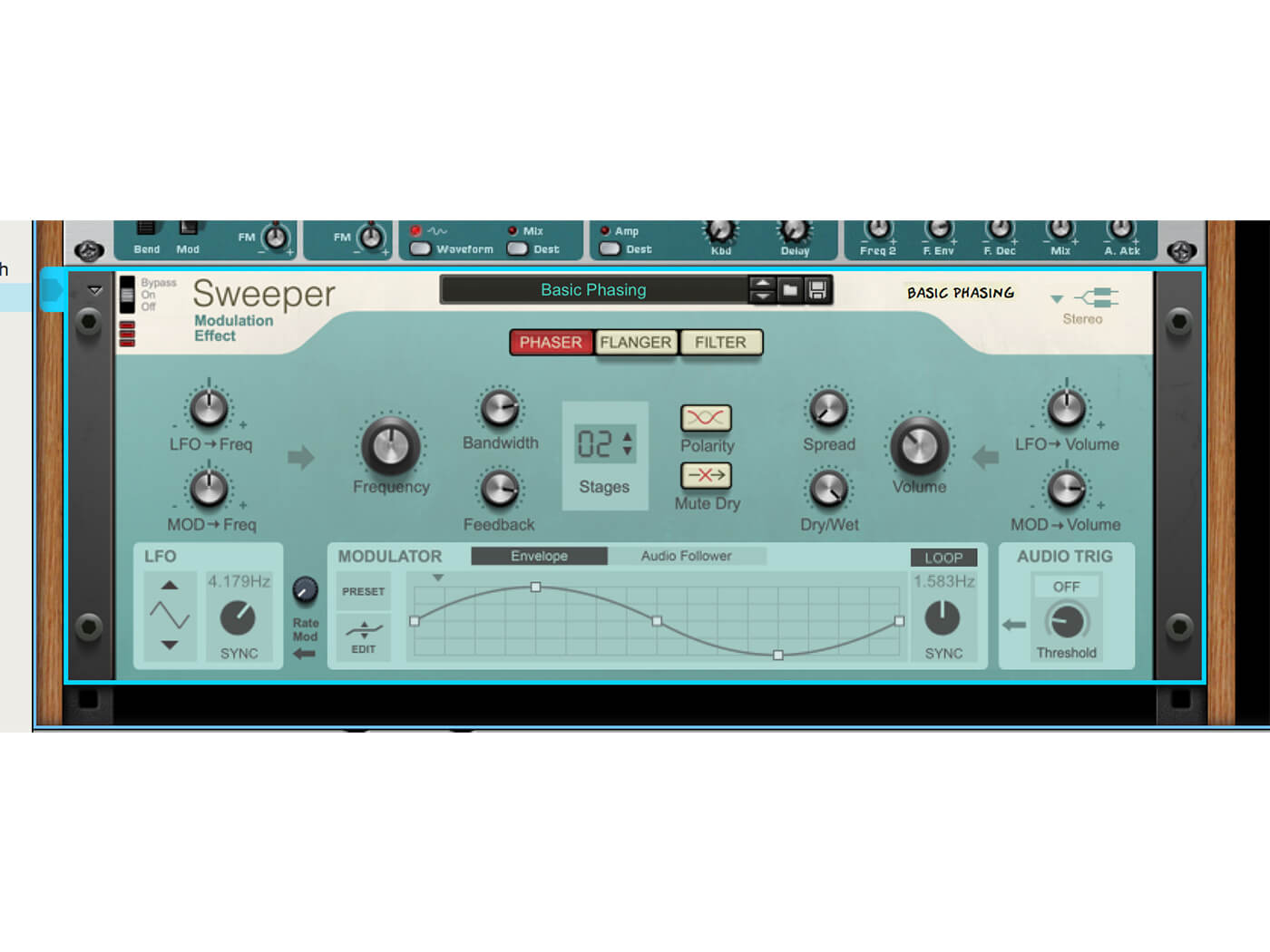 9. Of course, that previous waveform was a very dramatic example. You can also dial in a gentle sine wave envelope like this and you will get pretty much the same effect on your frequency and volume as the LFO gives you. 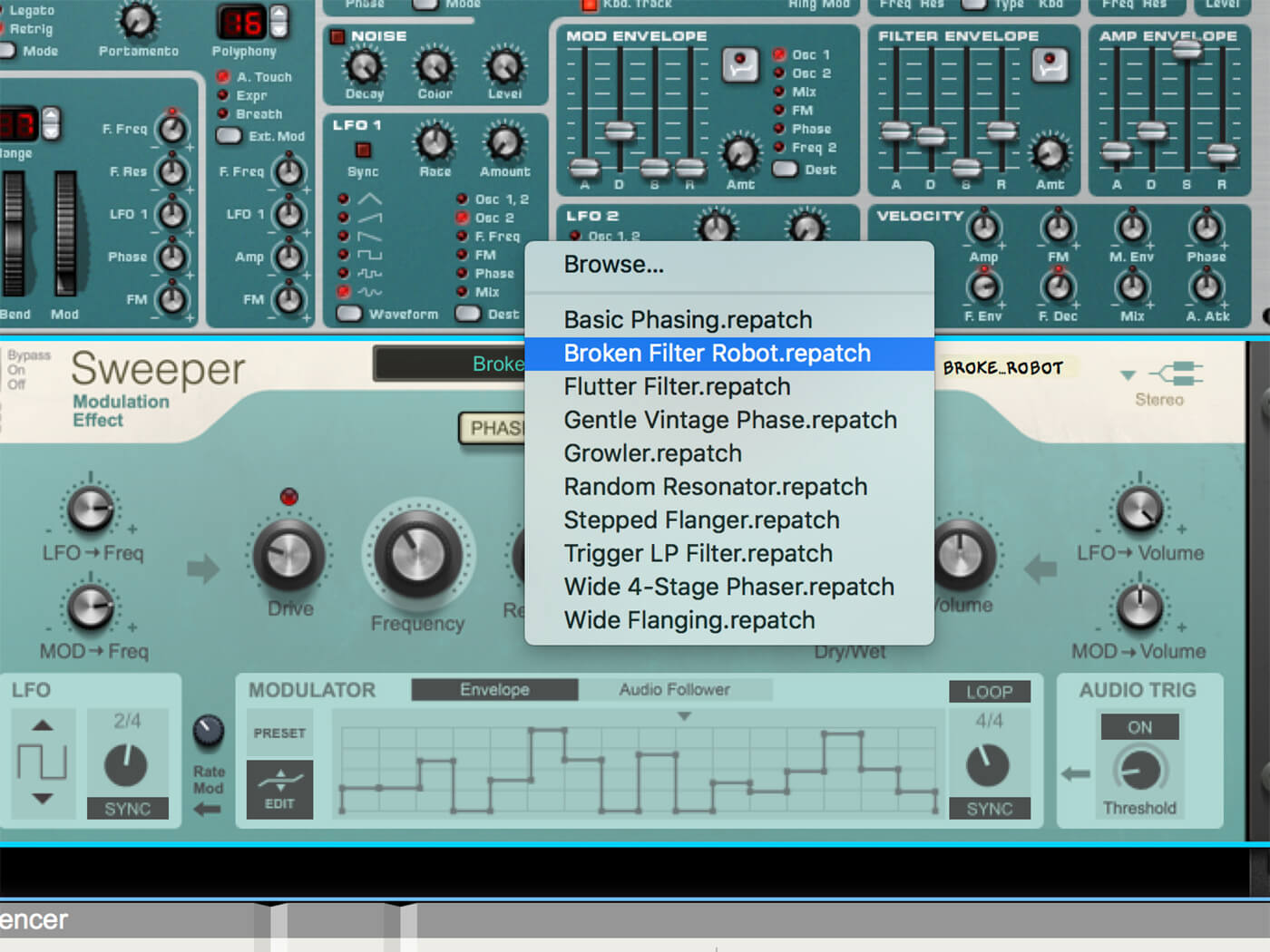 10. Now dial in the Broken Filter Robot preset and experiment with both the Filter and the Resonance dials. The former emphasises the sweep while the latter ups the ante at the filter cutoff point.

11. One final feature on Sweeper that’s worth exploring is the Audio Trig option. This only allows the device to operate when the input signal exceeds a level, set by the Threshold dial as shown. Here it is high so not affecting anything. 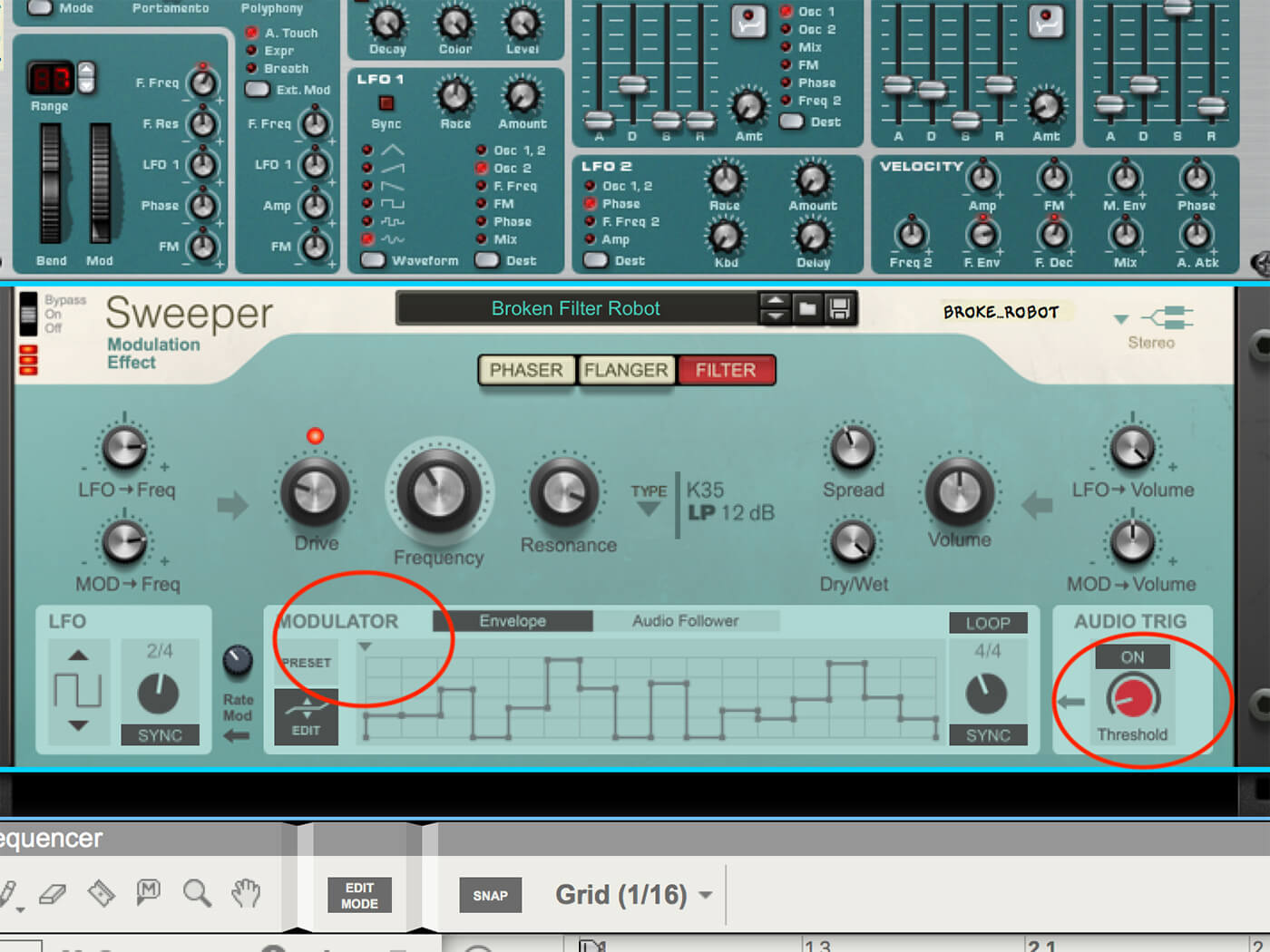 12. Dial it down and the device starts cycling around the modulating waveform whenever the input signal goes over the threshold level. Now the Threshold dial glows red and the waveform starts cycling left to right.

OTHER NEW DEVICES As we say in the main text some of the other new devices in Reason 11 were already with us in previous versions, albeit within Reason’s main mixer. Of these, Channel Dynamics is well worth exploring in that you can route its Gate Gain to modulate many synth sources. 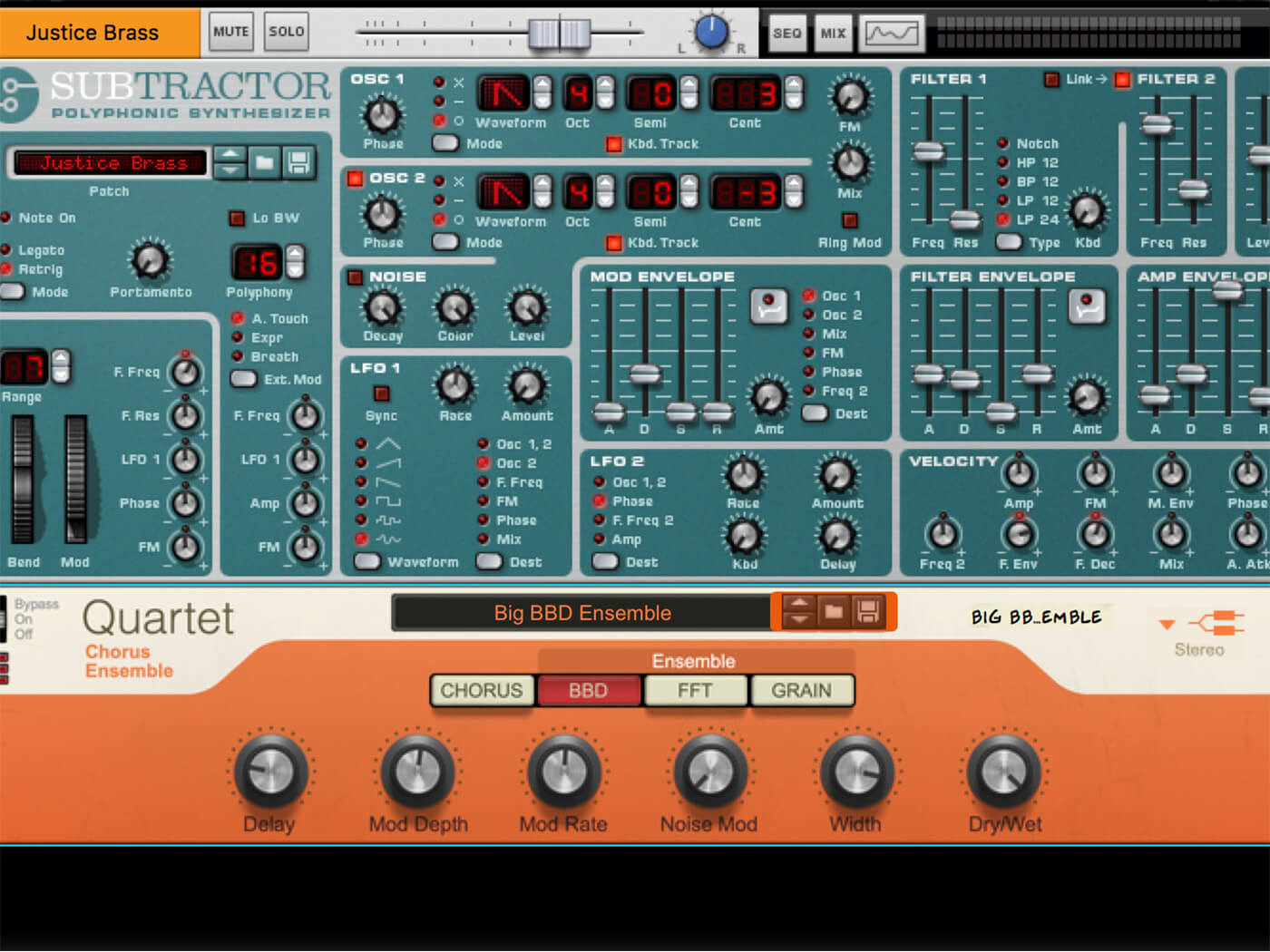 13. Now it’s time to look at Quartet, another new Reason 11 effects box, this time with four types of Chorus effect included. Delete Sweeper from your project and add Quartet, keeping the same MIDI riff you had. 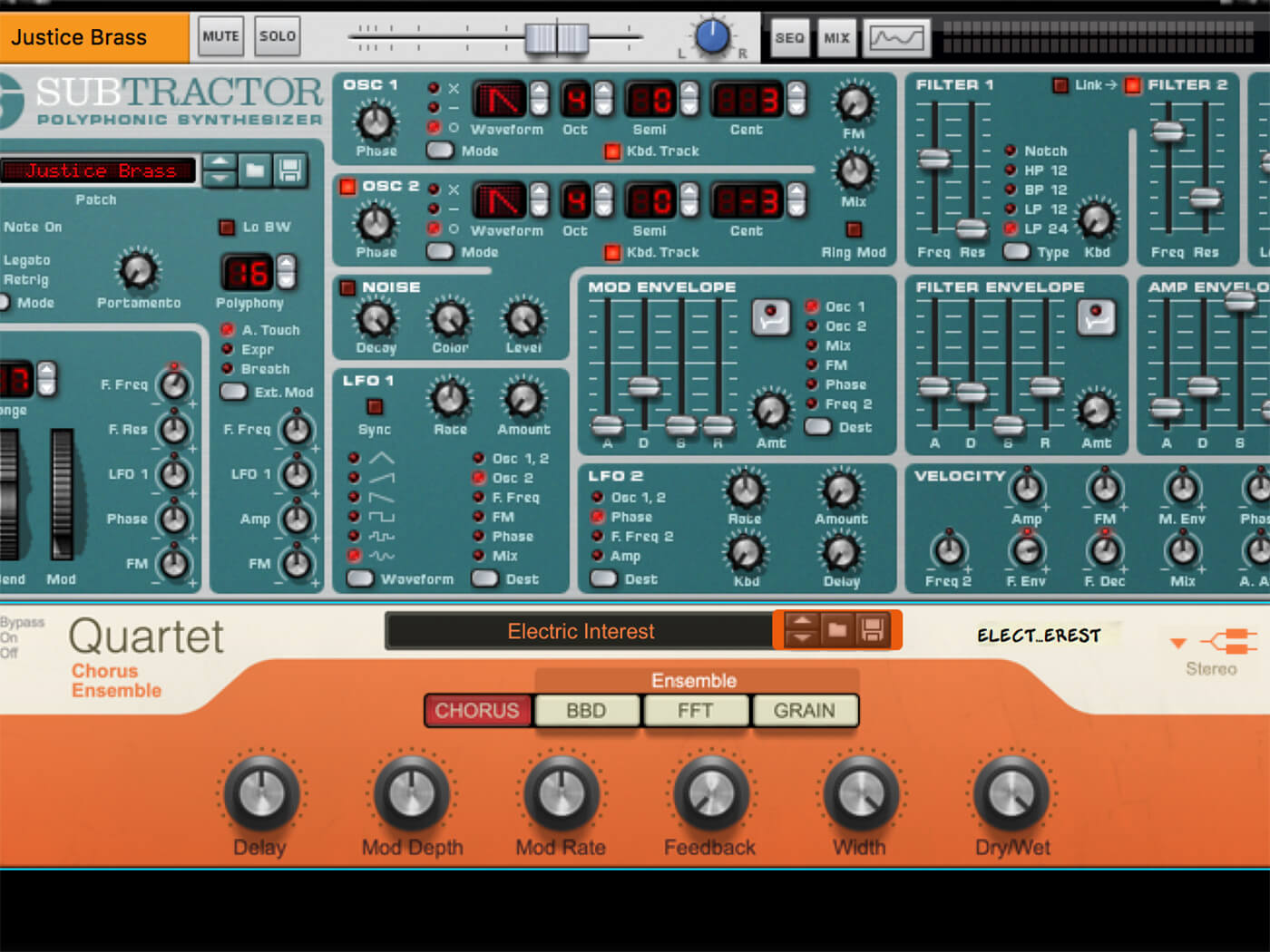 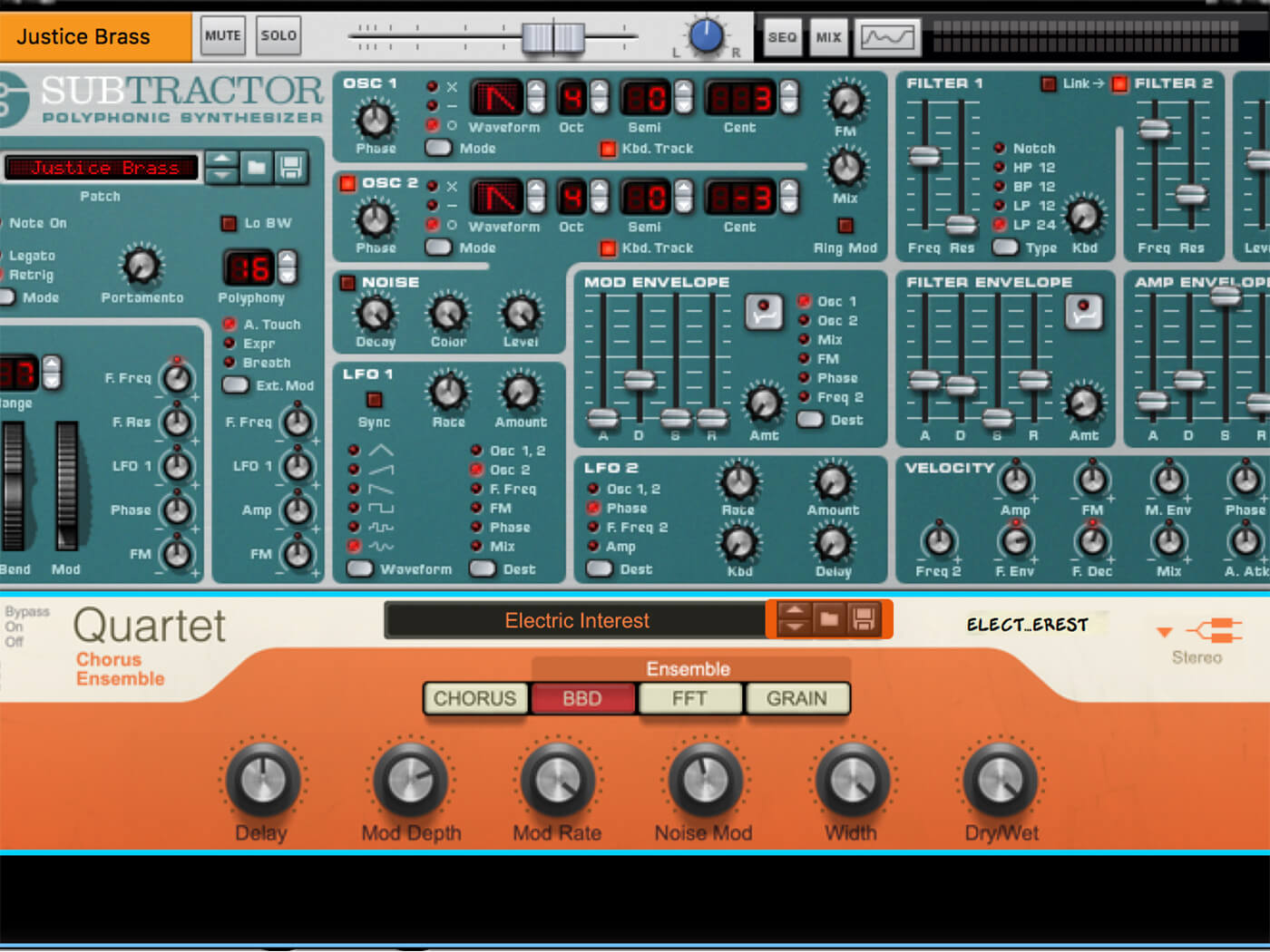 15. The BBD option is a bucket-brigade device or delay, where multiple versions of the signal are created at the same time. Here the chorus effect is more noticeable and you also get a Noise Mod option for more drama. 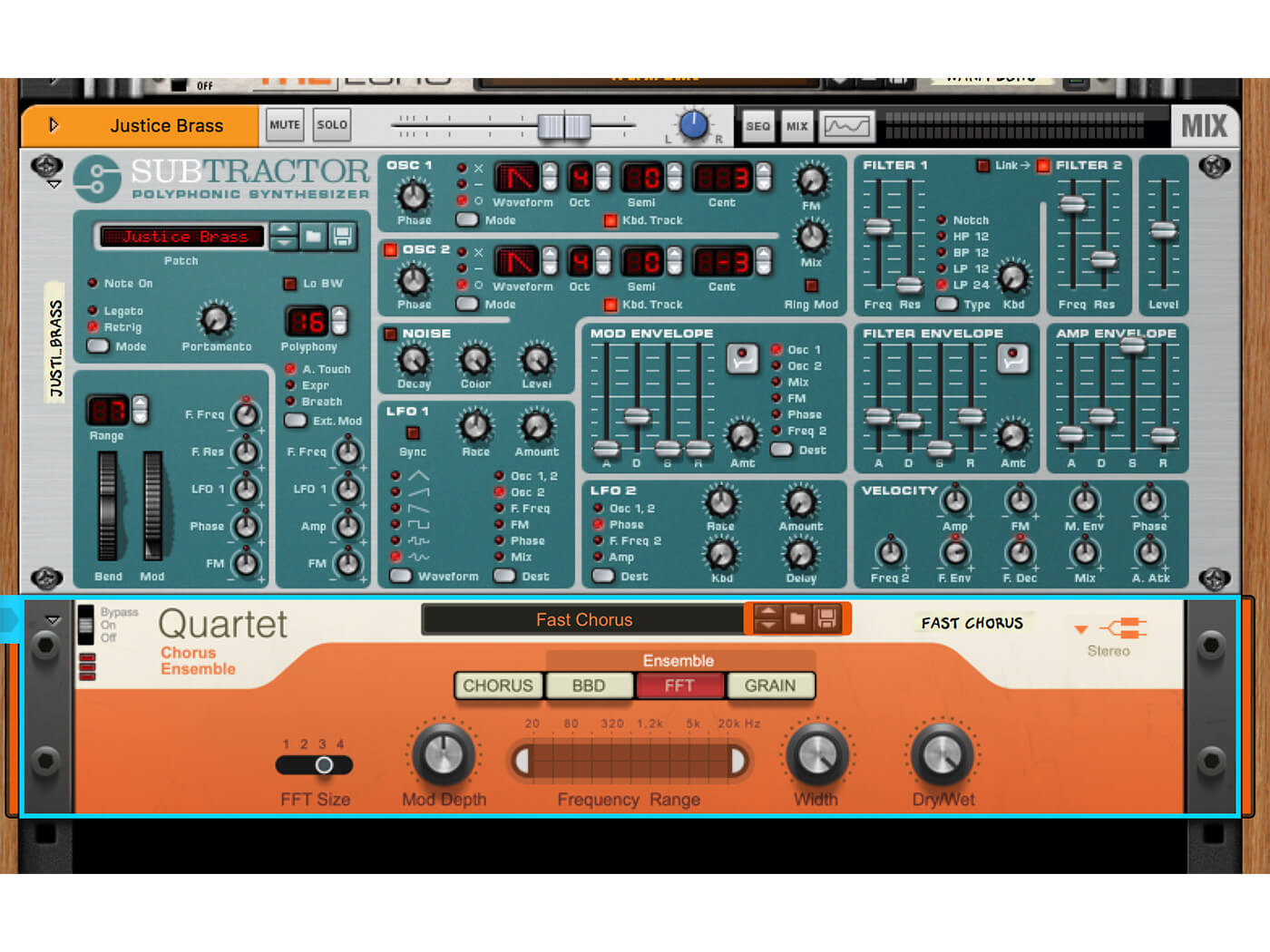 16. The FFT (Fast Fourier Transform) option allows specific frequency ranges of the signal to be affected. You get a dial in the middle of the screen to determine the upper and lower limits of this range. 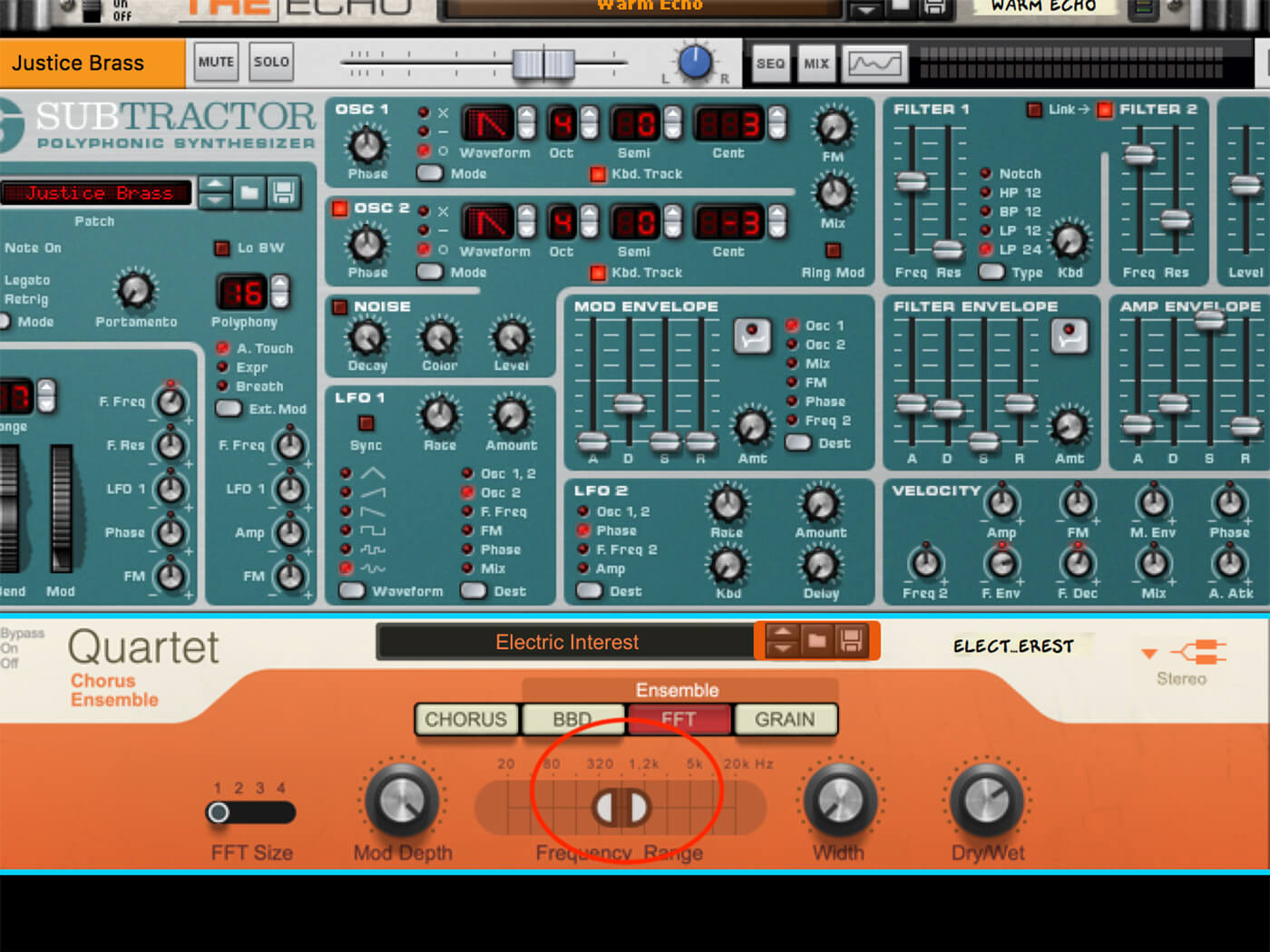 17. FFT is great for pinpoint chorusing activity. Try reducing the range of frequencies to a limited width, and sweep it across the whole range to find the point at which is has the most dramatic effect on your sound. 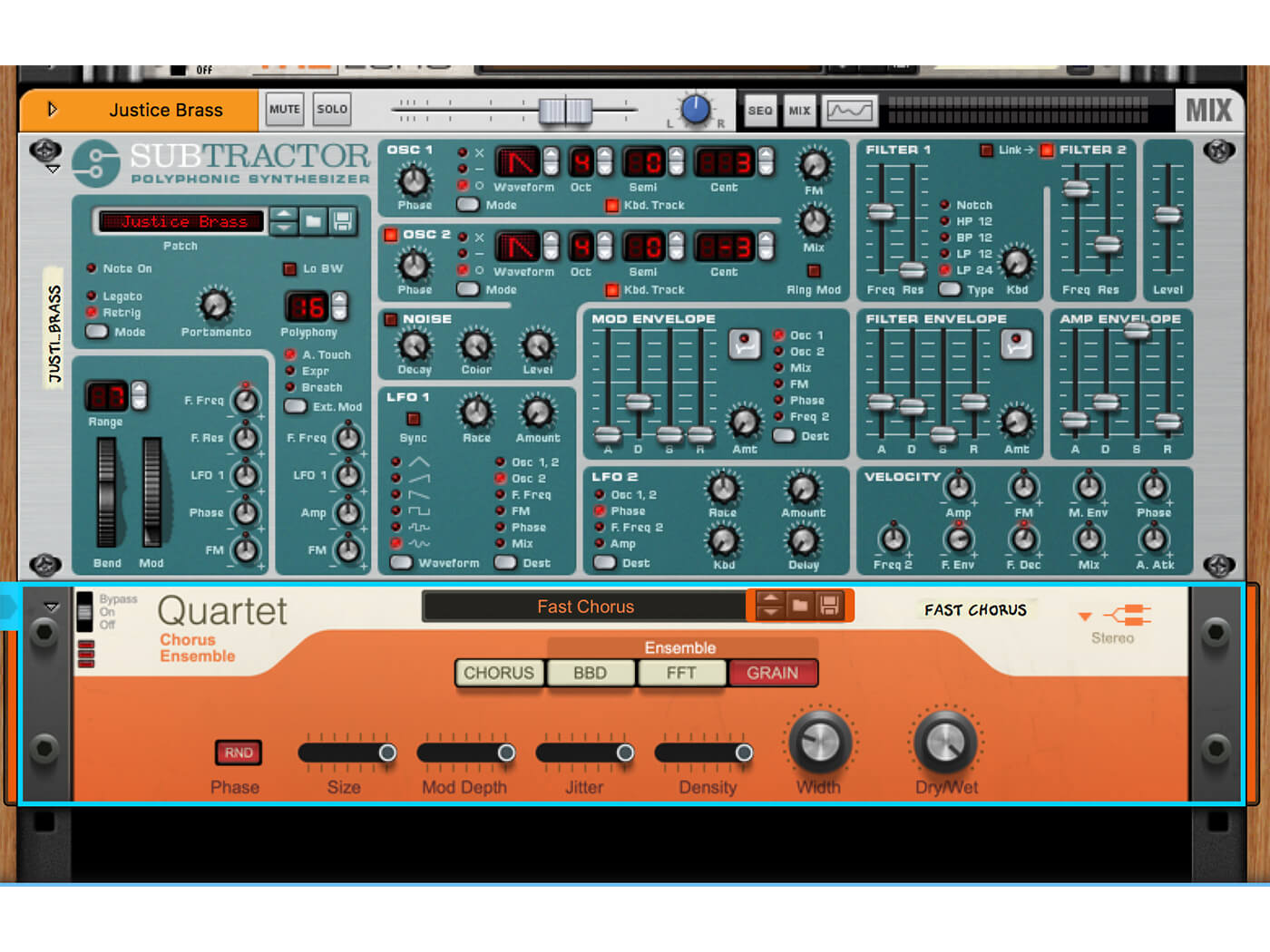 18. Finally, the Grain option cuts the input into slices or grains of signal with the chorus effect taking place across an amount with which you can determine Size and Density. It can add a very distinct colour to Quartet.