Avid’s latest update to Pro Tools improves the venerable DAW in numerous different ways. In this tutorial, we go through each new feature and highlight their value to your workflow… 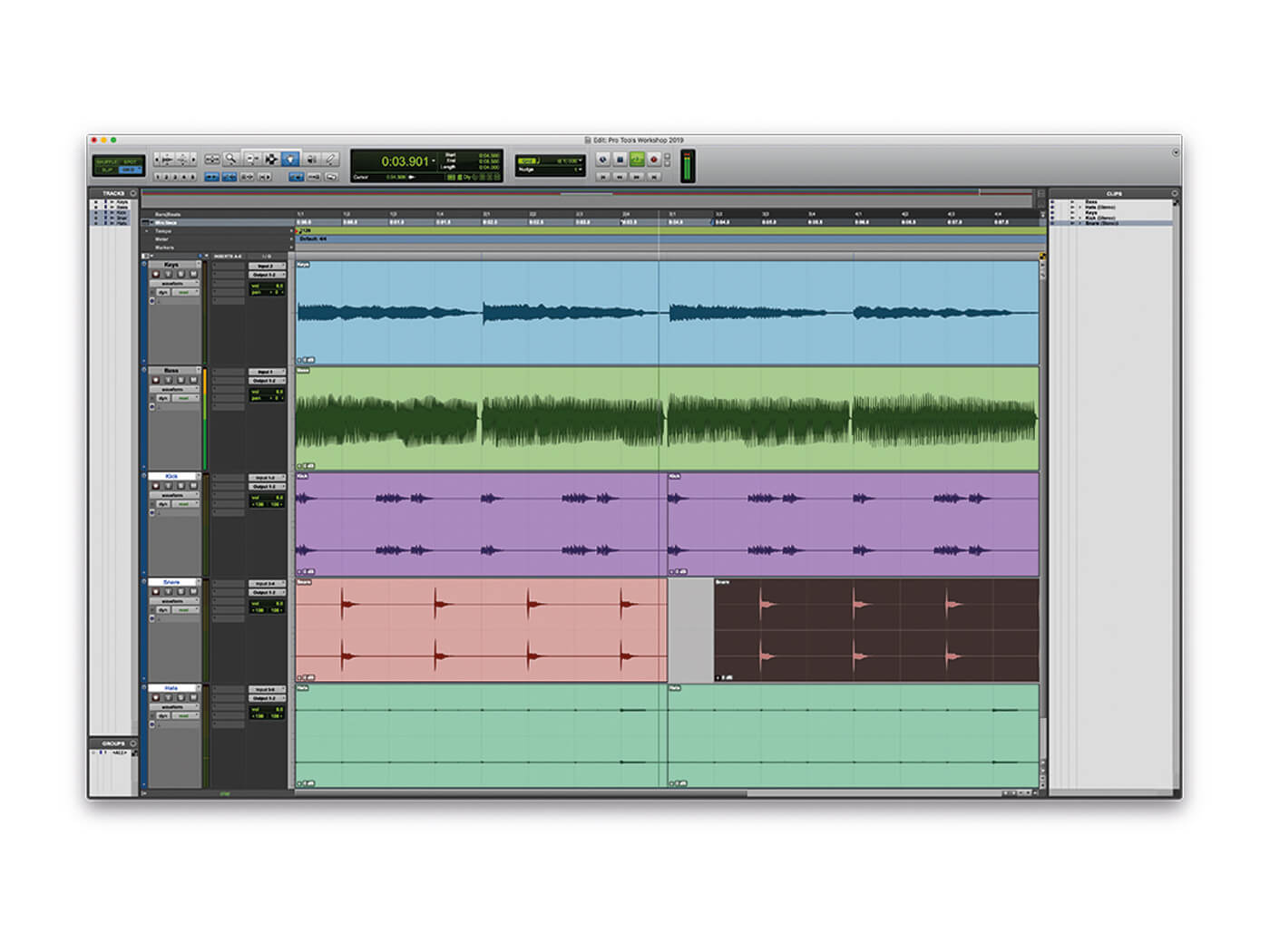 The subscription model Avid has moved to means Pro Tools users now get more regular updates and bug fixes, which has largely been a great thing for the user base. In 2018, Avid shipped six versions of Pro Tools, each subtly improving on the previous version rather than introducing any huge new features. This year, however, Avid has been much slower, with the first version of Pro Tools not coming until May.

Initially, Avid had intended to release Pro Tools 2019 in March, but bugs found during beta testing, relating to updates to the HDX firmware, caused delays to this first release of the year.

This attention to bugs is one of the big advantages of the subscription model and it is not only new bugs that Avid are ironing out before release, but plenty of existing bugs from previous versions will no longer cause problems going forward. However, the sacrifice is that Pro Tools updates now no longer come with quite as many flagship new features: in fact, for many users, Pro Tools 2019.5 will simply feel like a more polished and smooth version of the Pro Tools they have been using and loving for some time now.

All this is not to say Pro Tools 2019.5 does not come with any new features. For Mac users, the biggest update is probably the support for macOS Mojave, both in Pro Tools itself and in the accompanying EuControl software, which enables control of Pro Tools from S3 and S6 devices as well as the PT Control App running on iPads. This is of particular importance to anyone who might have bought a new Mac in the last year, since new Macs come with the latest OS preinstalled and downgrading to older versions isn’t supported at all. For everyone else, this means they can finally upgrade to Mojave, safe in the knowledge that it won’t break Pro Tools!

While this change only affects a subset of Mac users, the next major change only really affects users running enormous projects. Previously, Pro Tools was limited to 256 audio channels – more than enough for many users, but problematic for some film and TV dubbing editors, as well as some more adventurous musicians. Pro Tools 2019.5 expands this to 384 audio channels by default and can be further extended to 768 voices using HDX cards, or by purchasing Native Voice Packs, which expand Pro Tools by 128 voices per pack. Similarly, Avid has expanded the number of available MIDI channels to 1024, vastly expanding the number of virtual instruments you can have in a single Pro Tools session.

Poorly named tracks are a bugbear of many professional engineers. There is nothing worse than receiving a project containing files titled Audio_01, Audio_02 etc. Pro Tools 2019.5 has added track naming to the New Tracks dialogue window, making it easier than ever to make sure this never happens to one of your sessions.

Unlike previous versions, Pro Tools 2019 will no longer stop playback when you perform a number of basic editing and mixing actions, such as moving clips in the edit window, adding or removing tracks or plug-ins, or routing audio. This means you can now quickly loop audio and keep it in playback as you experiment with a number of different ideas. And as a further improvement you can now even change the loop points without stopping and restarting playback.

This behaviour isn’t perfect: many plug-ins have a built-in latency, which will inevitably cause a slight glitch in the playback performance as Pro Tools readjusts the latency compensation, but it should make for faster workflows, leaving you to be creative without worrying about how Pro Tools will handle the changes.

Now that Avid are back in the swing of things with Pro Tools 2019.5, we look forward to more updates as the year progresses. As much as we look forward to these regular updates and minor improvements in our workflow, it will be interesting to see if the next version of Pro Tools has a few more headline-grabbing features. The annual ACA (Avid Customer Association) survey shows a number of key improvements users are clamouring for, including track folders, advanced MIDI editing and support for ARA (Audio Random Access) plug-ins, such as Melodyne.

How to use the updated features on Pro Tools 12.5: step-by-step 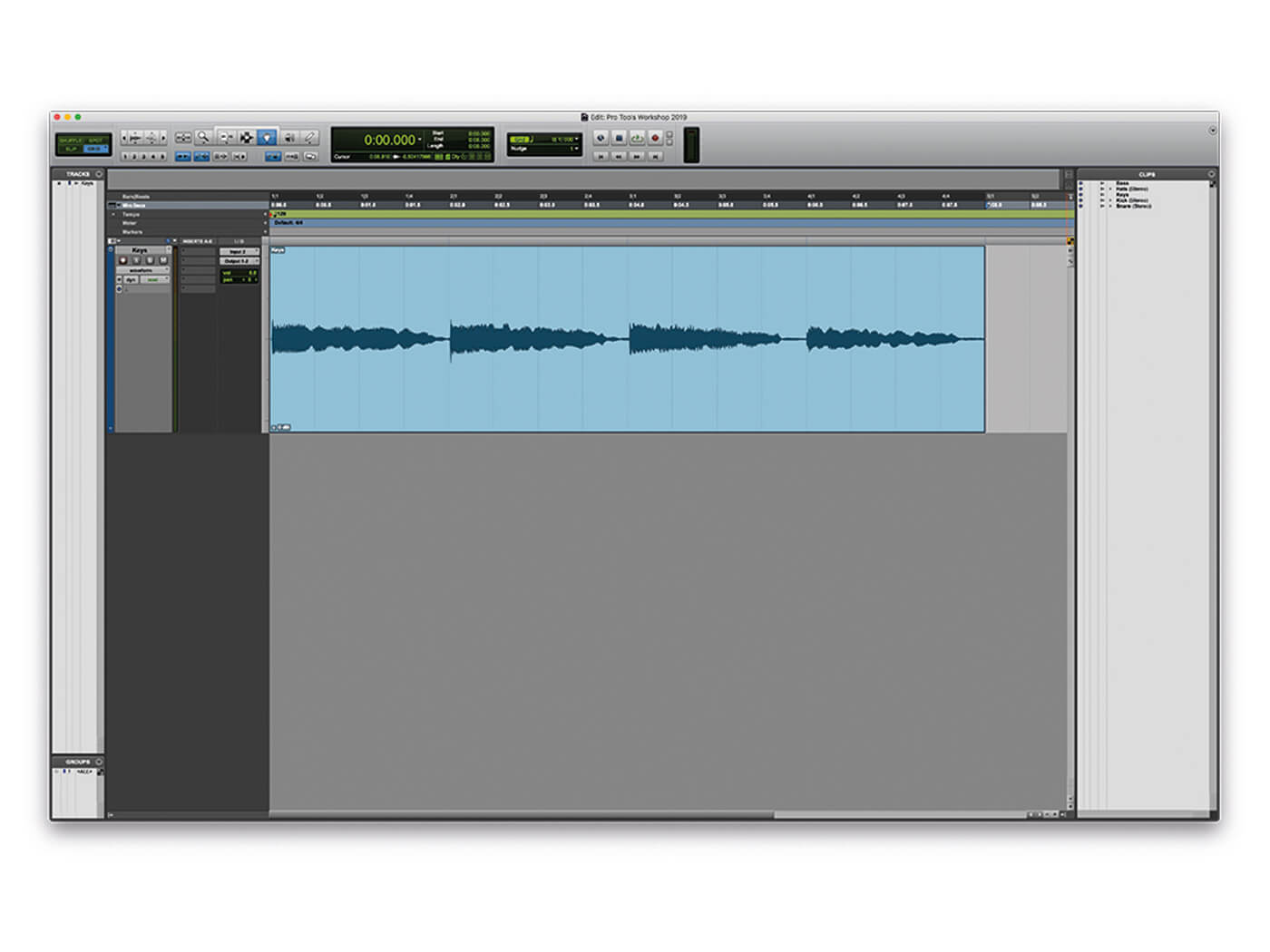 1. Before we begin the tutorial, make sure to download a copy of our free Pro Tools Workshop. Open the file. The project currently has only a single keys loop loaded up. 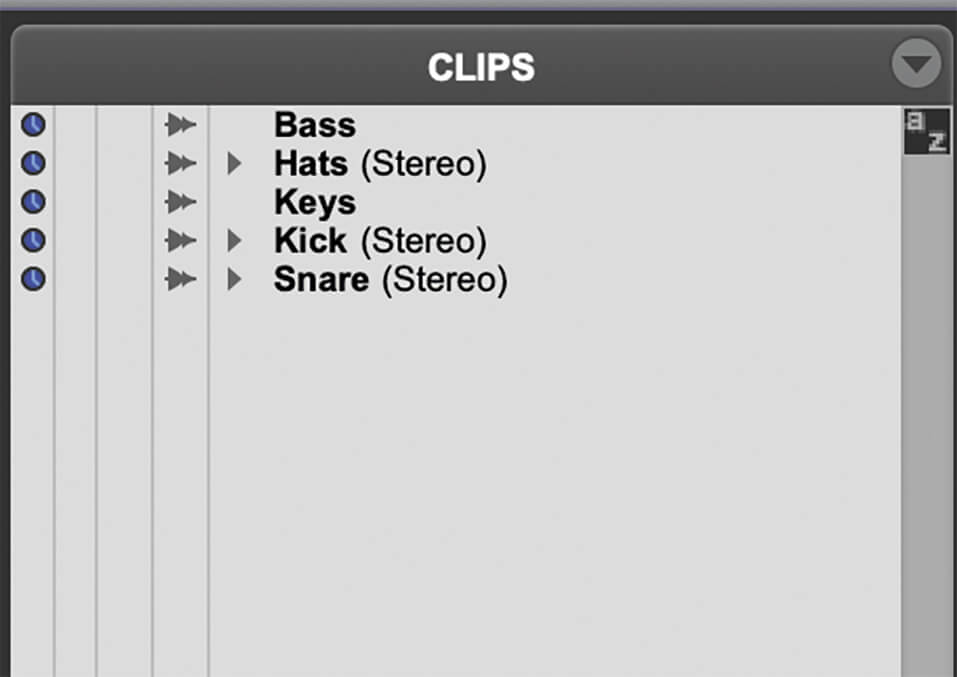 2. In addition to this one loop, we’ve added a couple of additional loops to the Clip List. Let’s add these to the project. 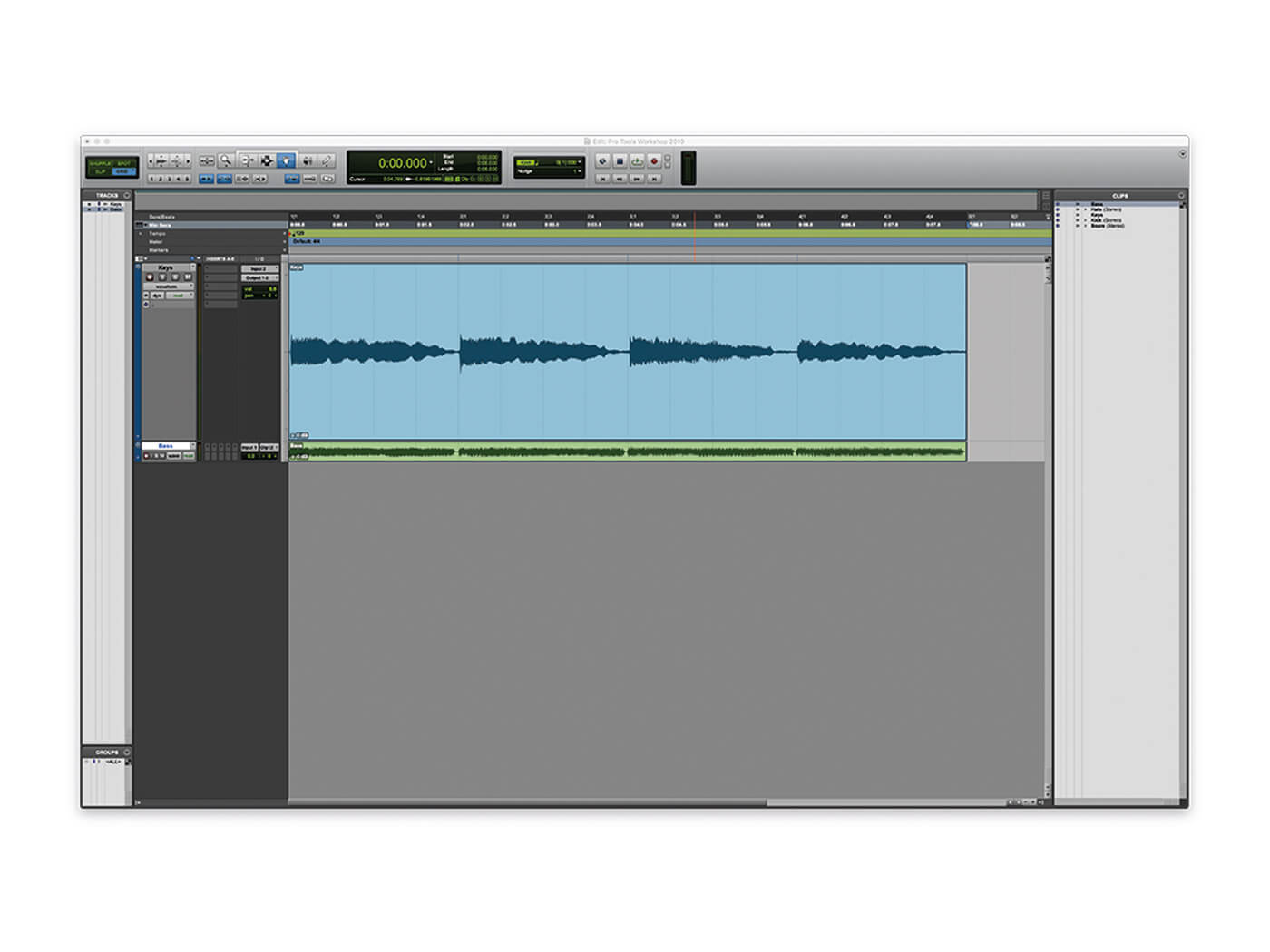 3. We can add the first loop by clicking and dragging the Bass clip from the Clip List into an empty space on the edit window. Note how the new audio track that is created is named after the clip name.

4. Before dragging the next clip in, let’s create a new track, Shift+Ctrl+N (PC), or Shift+Cmd+N (Mac). The upgraded New Tracks dialogue box now includes a space for naming each new channel. 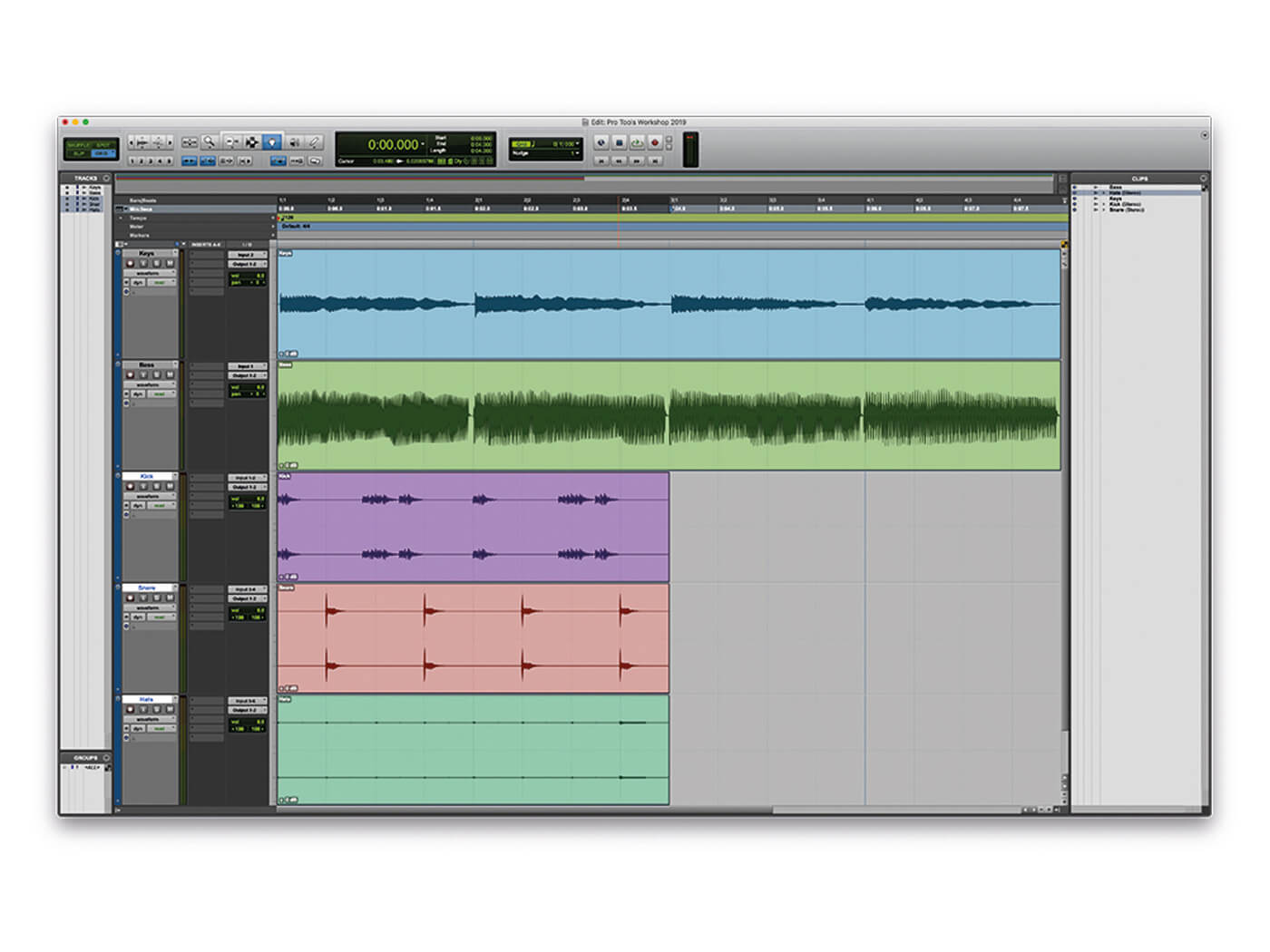 6. Finally, drag the three remaining clips from the Clip List into the relevant tracks in the edit window.

CHANNEL SURFING When creating multiple channels in a single line of the New Tracks dialogue box, each channel will be given a sequential number. So you could, for instance, create three backing-vocal channels, named BV 1, BV 2 and BV 3 from a single line. 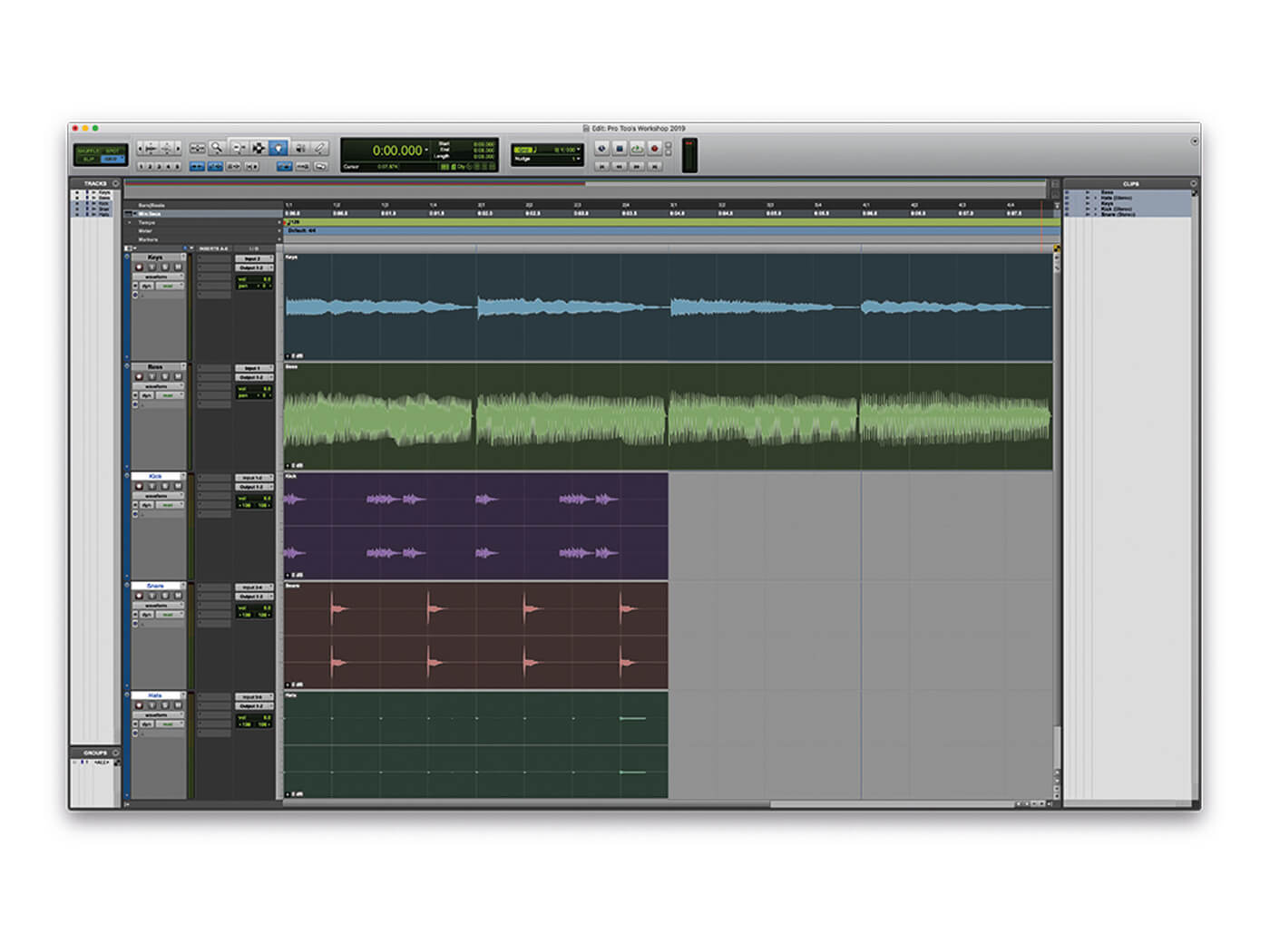 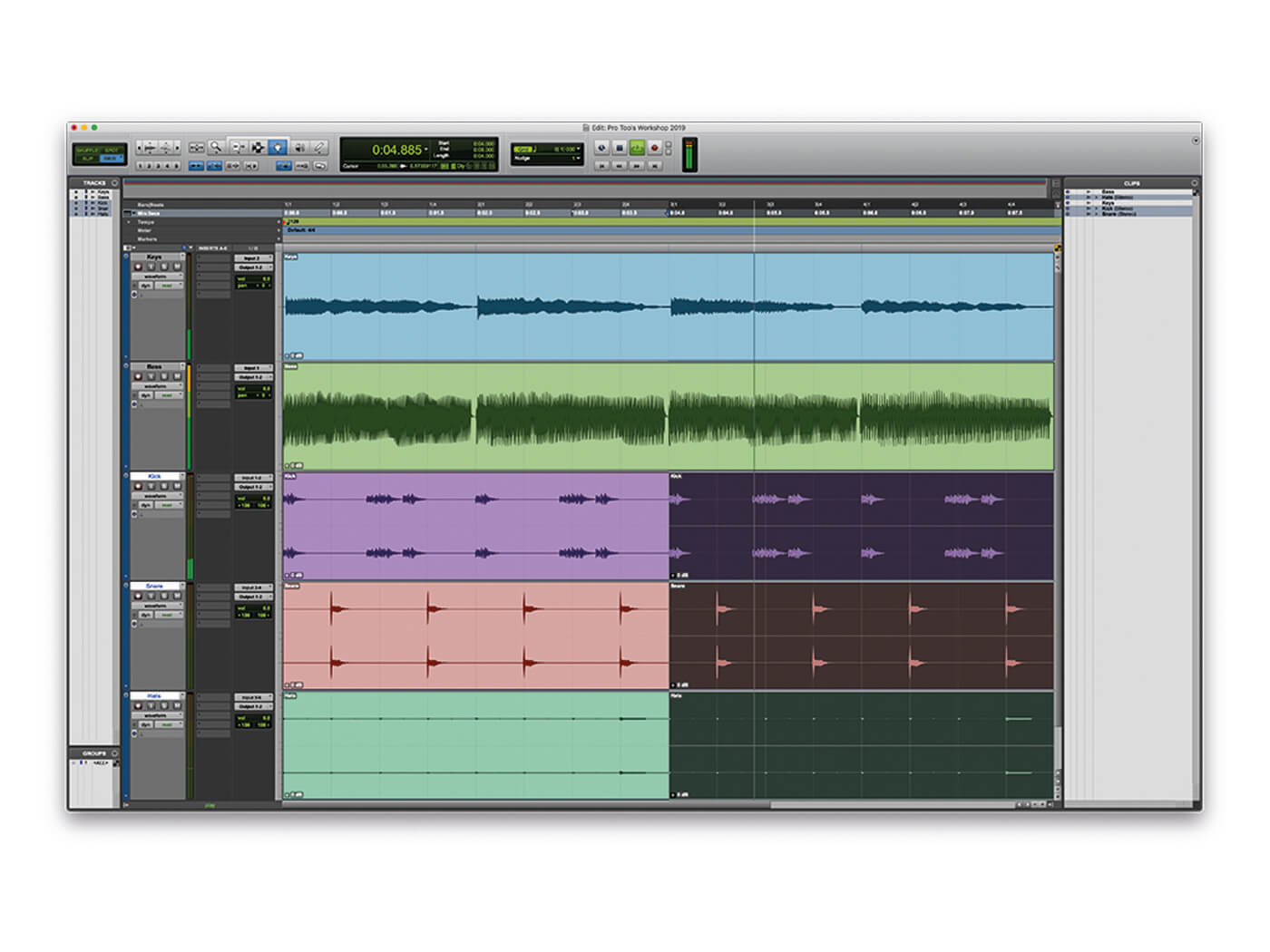 8. While the loop is playing, highlight the three drums loops and press Ctrl+D to duplicate these three loops.

9. Similarly, you can now pick up and move loops while Pro Tools is playing, without interrupting playback. 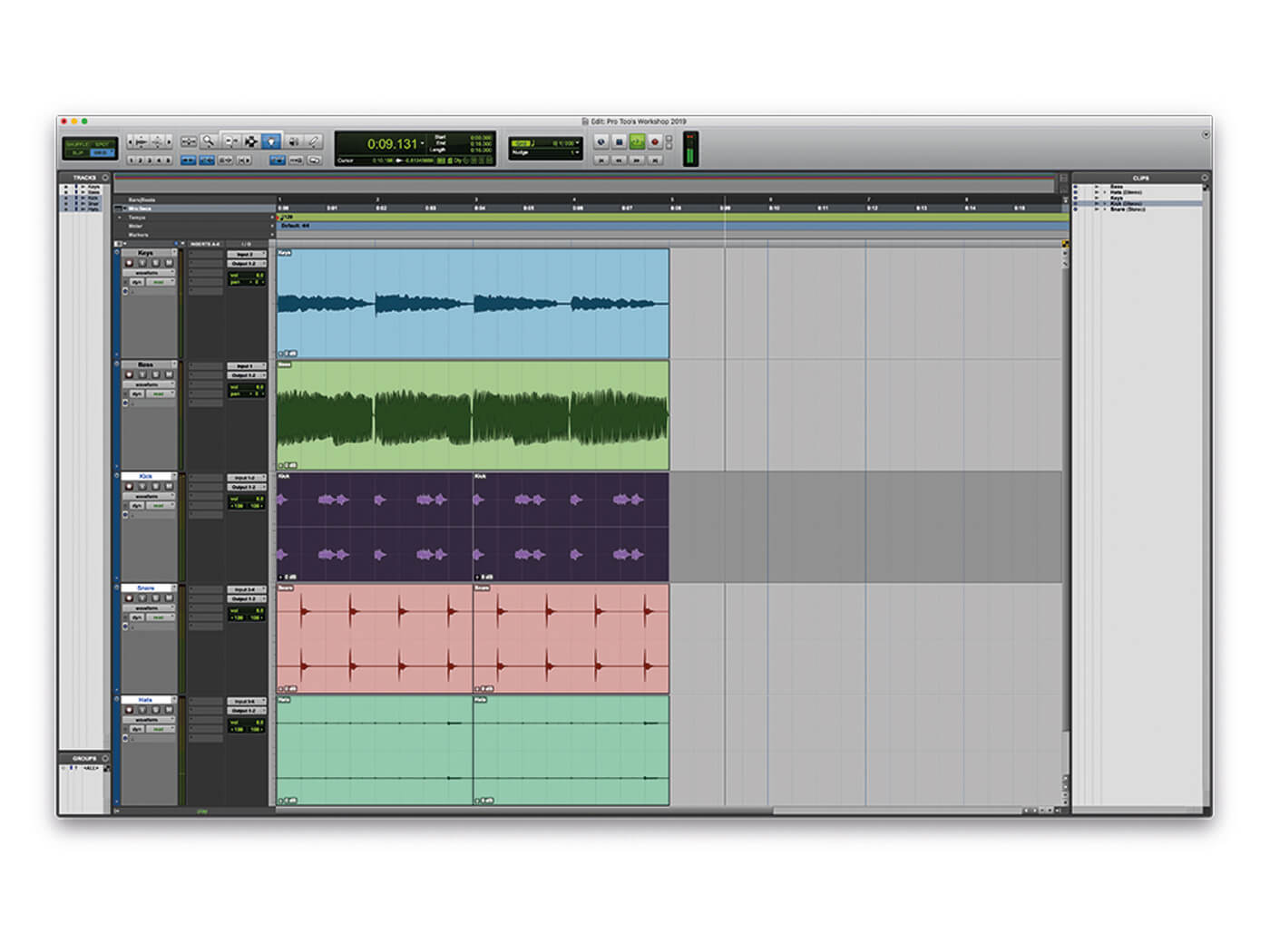 10. Still with the four-bar loop cycling, pick up the end loop point and move it to create an eight-bar loop. Pro Tools will continue playing and adjust the loop accordingly. 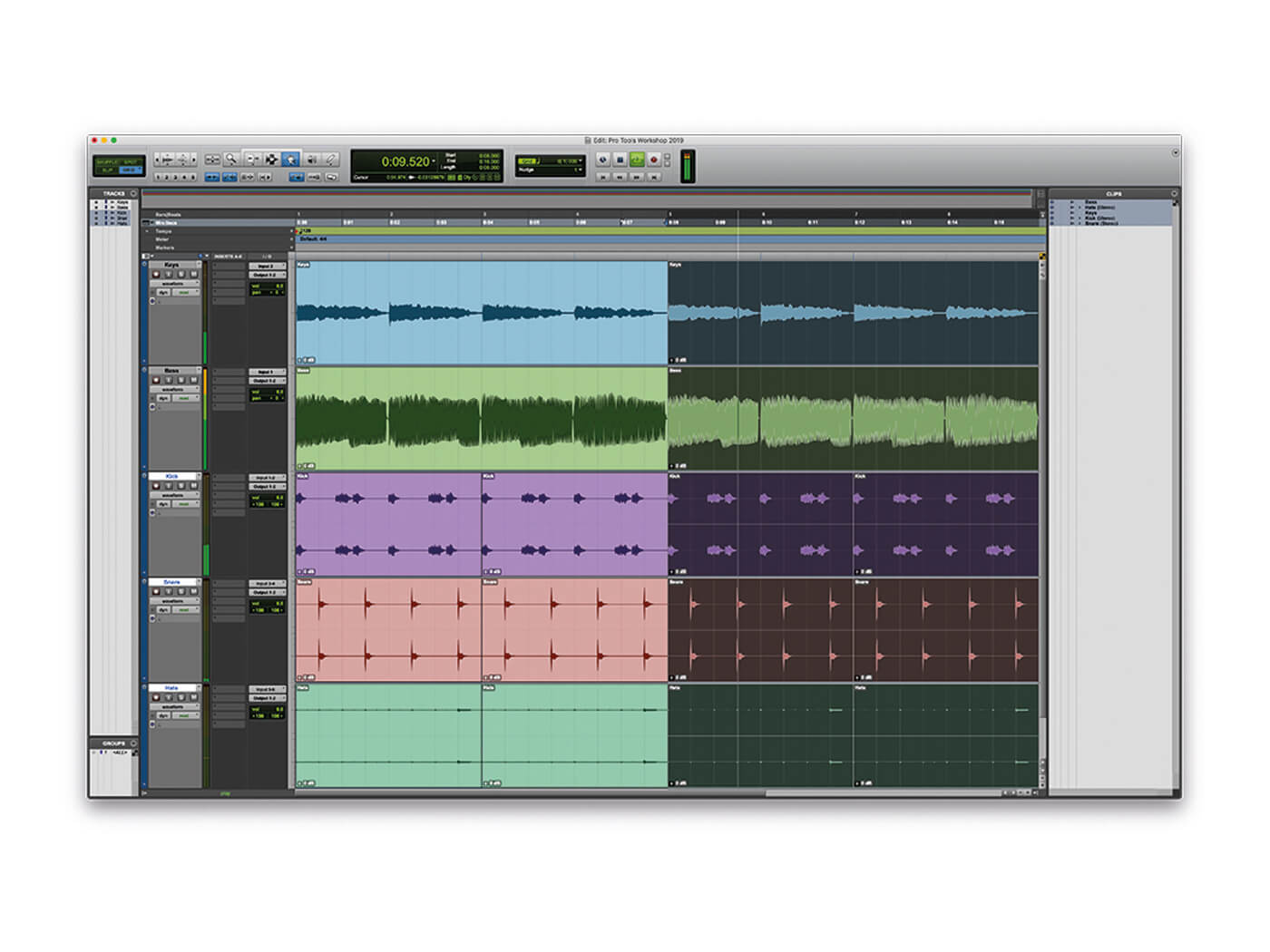 11. Highlight all of the clips and press Ctrl+D (PC) or Cmd+D (Mac) to duplicate them to fill out the full eight-bar loop.

MAKING FRIENDS Pro Tools 2019 also came with Avid Link, which replaces the older Avid Application Manager. Avid Link includes a social profile, enabling you to share music with other musicians, hang out and learn in the Lounges and exchange projects across the internet. 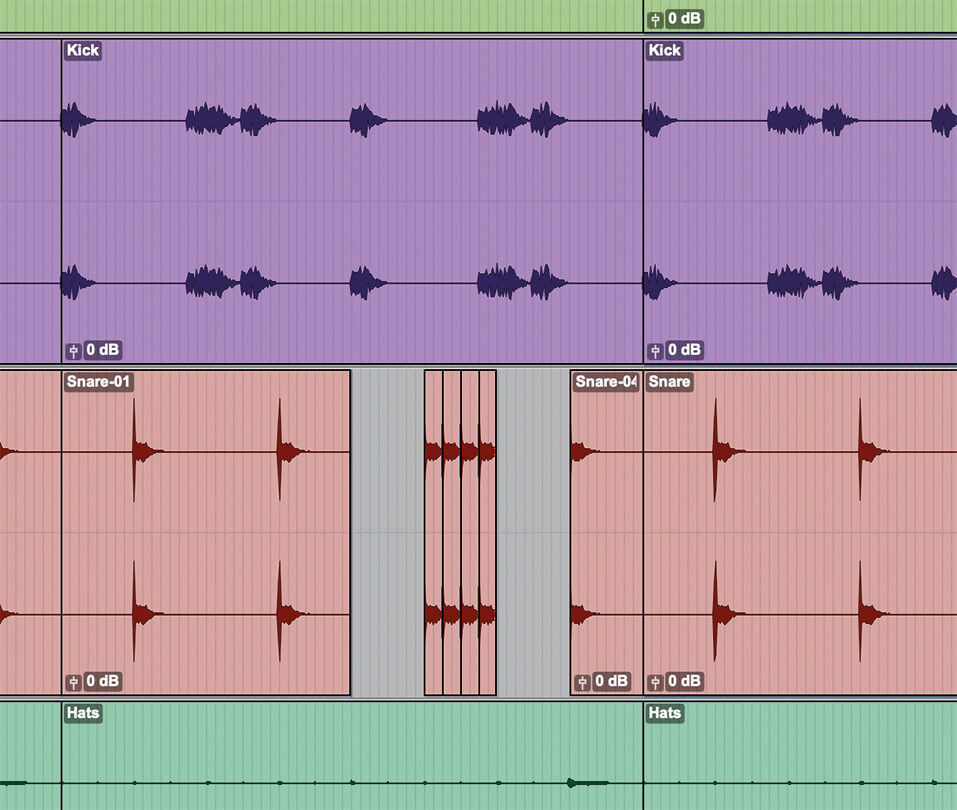 12. You can do further edits, such as cutting areas of audio from loops, or highlighting small regions to create a stutter edit, all without interrupting the playback. Keeping you in the creative zone. 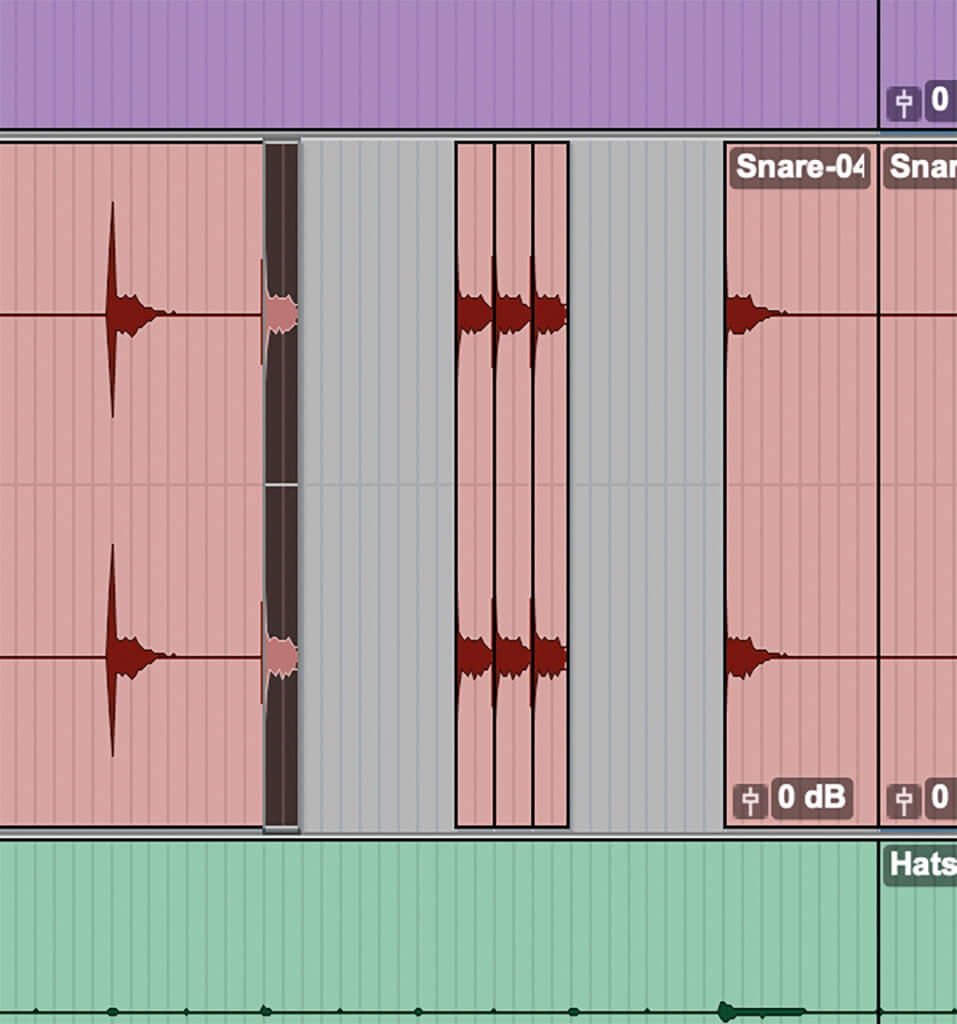 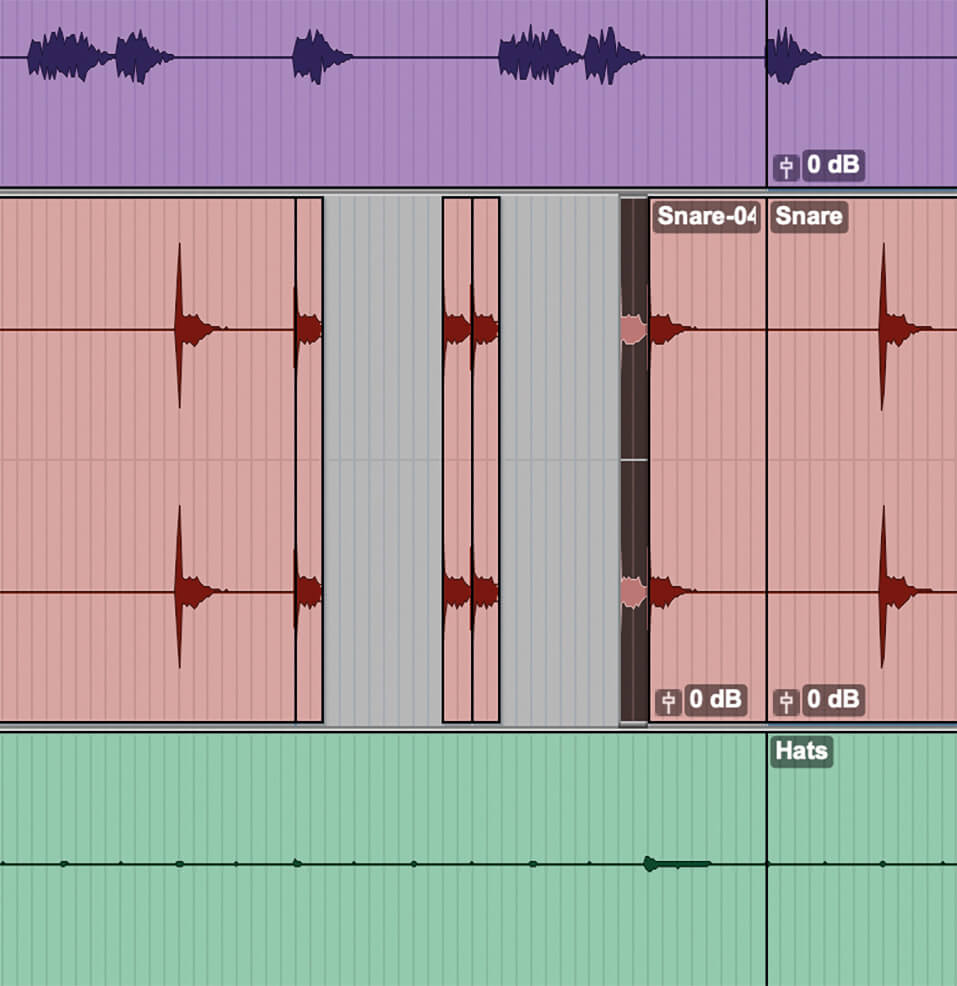 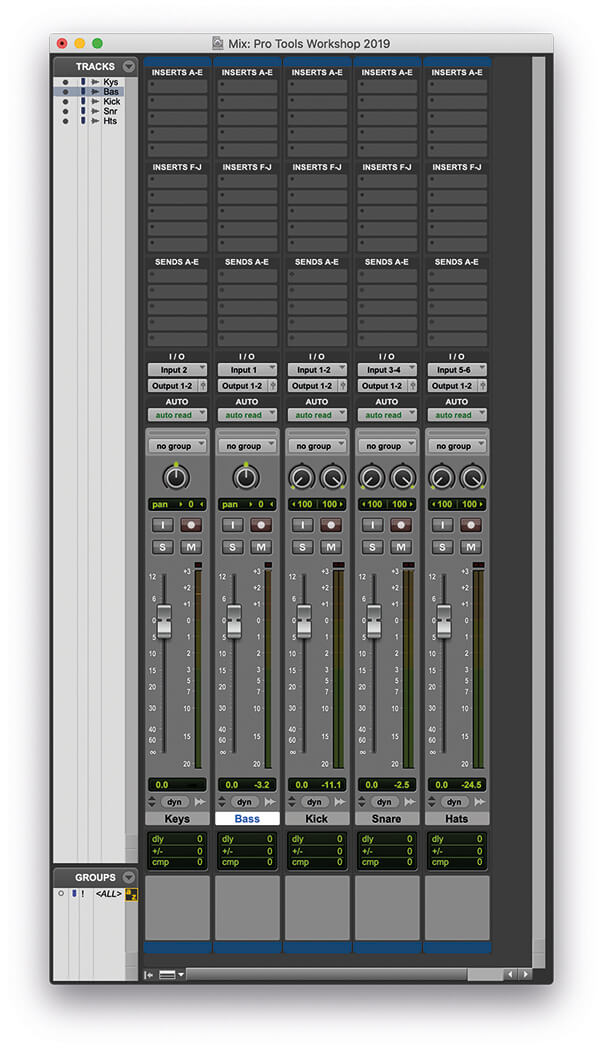 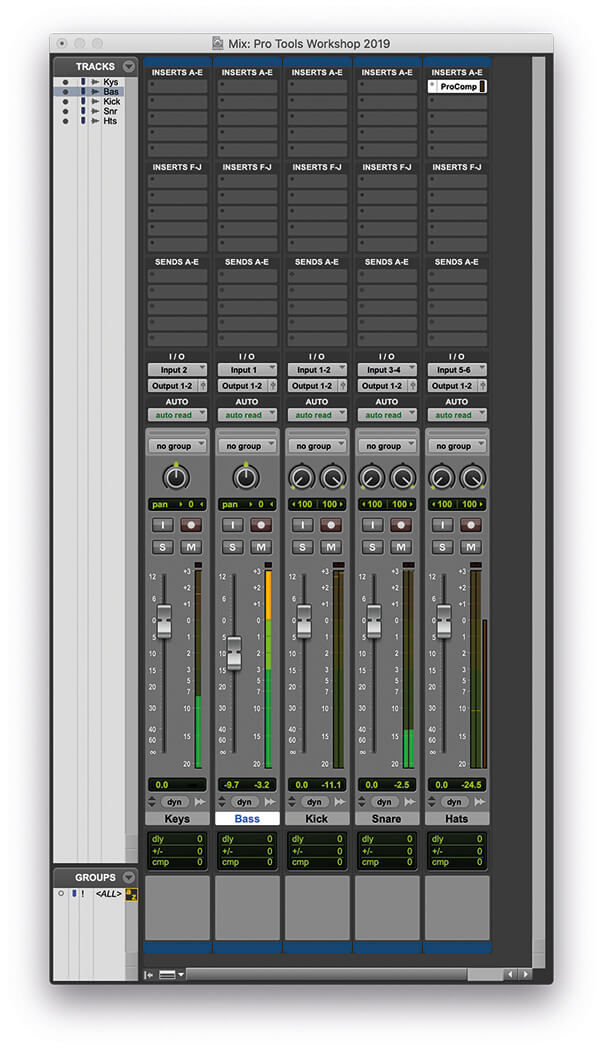 16. Let’s start by bringing the bass down, and adding some compression to the hats. Note how adding the compressor doesn’t interrupt playback. 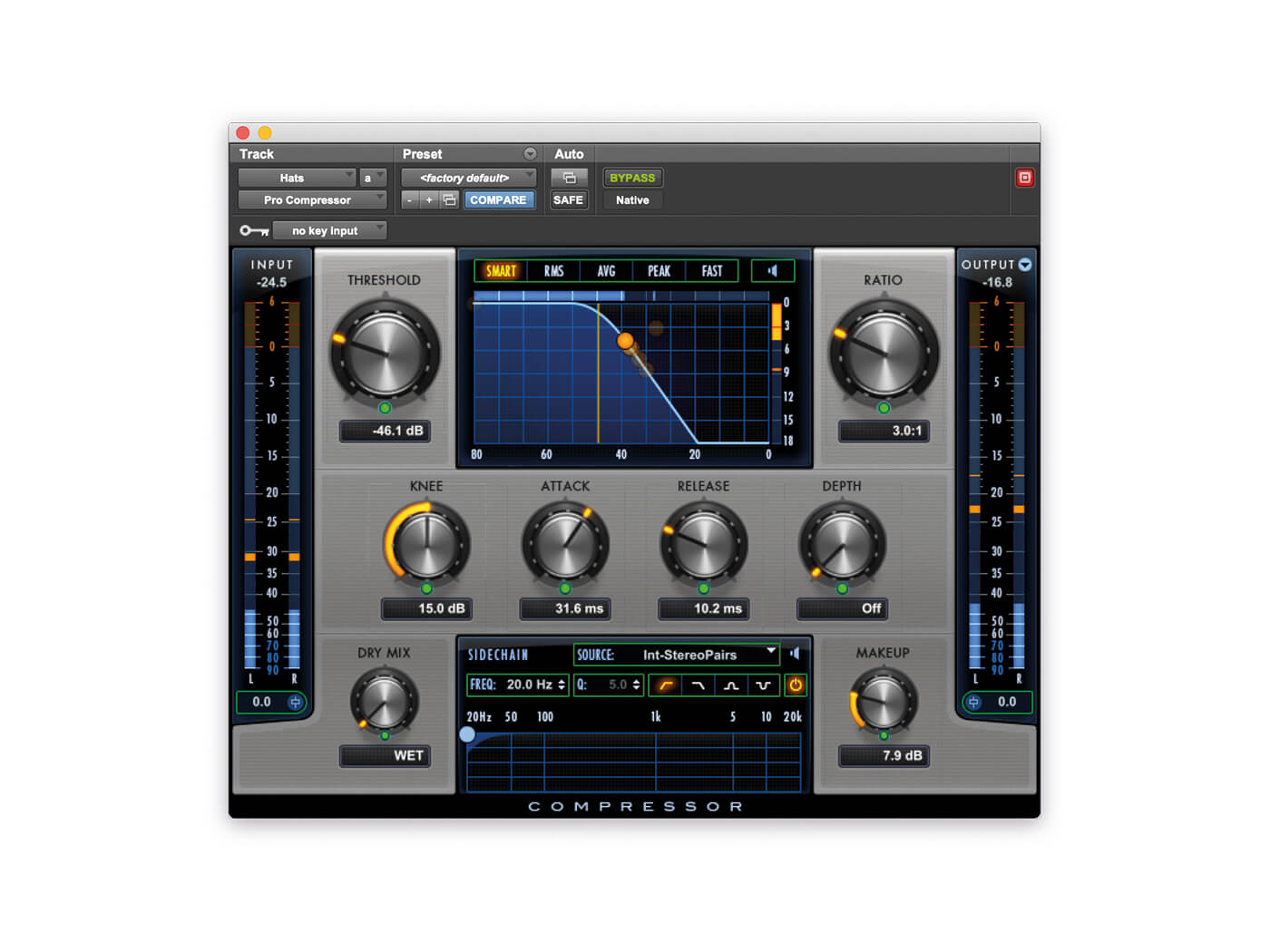 17. Set the compressor to enhance the attack of the hats by using a slow attack and fast release setting. 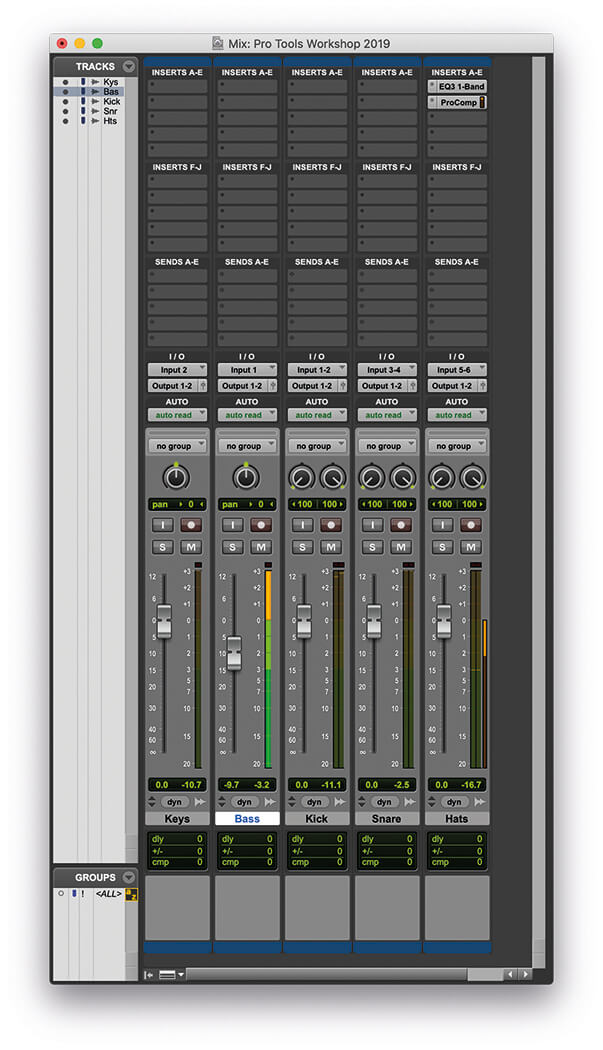