Learn to use the Automation modes in Pro Tools 2020

Automation is the single most useful tool in a modern DAW, but using it can quickly get confusing. Let’s take a deeper look at Pro Tools’ automation modes and tools. 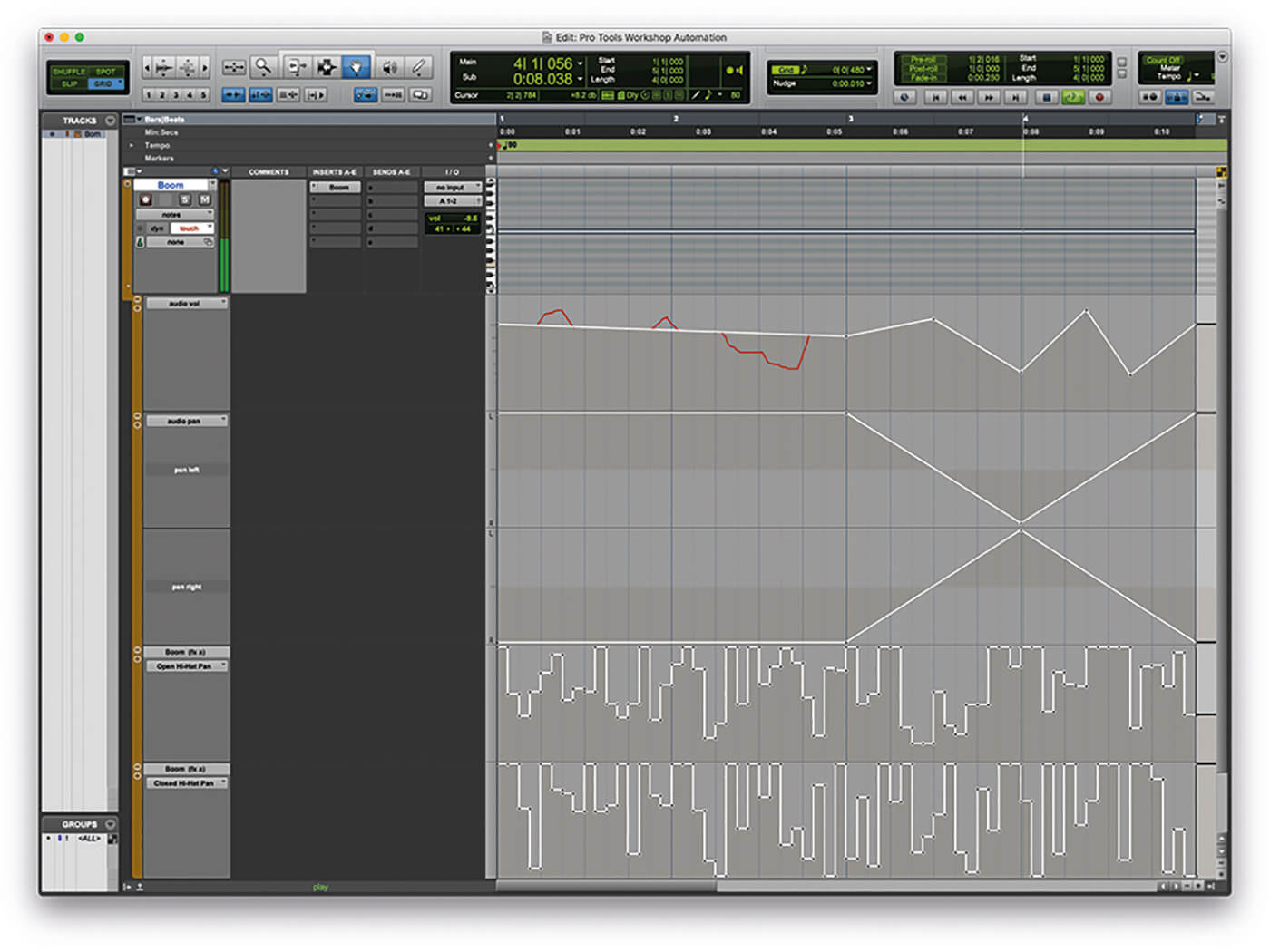 Automation is an essential part of almost all modern mixing. Whether it is enhancing a chorus with a few simple fader rides, controlling the parameters of a plug-in filter to perform a sweep, or crafting custom morphing sounds from an outboard MIDI instrument, automation enables you to not only perform these moves, but record and then edit them so they become a part of the mix.

You’re probably even already using some automation in your mixes, drawing in rides with the Pencil and Trim tools. In this workshop we’re going to look at the various automation modes in Pro Tools, which allow you to write automation in real time as the song is playing – either with a control surface, or simply with the mouse.

The first two of the standard automation modes, Off and Read, are self-explanatory. Off mode turns automation off entirely. In this mode no parameter changes are written as automation at all, and any automation that is already in the project is ignored. All parameters on a track assigned as automation Off will become static. Read mode is the default setting. In this mode, the track will follow all automation that has been written to the channel, but no further automation will be written. If automation on a setting already exists and you adjust the parameter further, this adjustment will be lost the next time you hit play, as the existing automation overrides the current parameter position.

The remaining modes: Touch, Latch, Touch/Latch and Write each provide different rules for writing automation. Touch mode will only write automation to a parameter when that parameter is being adjusted. The parameter(s) being adjusted will revert to their previous position as soon as they are released, enabling you to perform a quick adjustment for a section of the song and then let go of the parameter to revert to the previous setting.

Importantly, only the parameters being adjusted will be written, with all other parameters following the existing automation as if in Read mode. Latch mode works similarly to Touch, writing automation to parameters as they are adjusted, but instead of reverting to the previous position when released, the parameter will remain in its new position when released and will continue to write over any previous automation until you press stop. Any parameters that were not adjusted during playback will retain their original positions, and will behave as if in Read mode.

Write mode differs from Touch and Latch in that all enabled parameters are overwritten as soon as playback starts. This mode is dangerous, as it will wipe any and all existing automation on a track, and can equally be a nuisance if you haven’t carefully controlled which parameters are write-enabled in the Automation Window (Ctrl+4 (PC) or Cmd+4 (Mac) number pad only).

Trim mode modifies the behaviour of Touch, Latch and Write modes, such that instead of writing over the existing Volume and Send Level automation lanes, a new Trim automation lane is created, which combines with the existing automation. This is particularly useful if you have a number of small rides in a section that you want to keep, while automating the whole section up or down. Pro Tools users without Ultimate can achieve something similar by simply editing the automation with the Trim Tool (F6). To protect users from accidentally overwriting their freshly written automation, write-enabled tracks can be configured to revert to Latch or Touch as soon as playback stops.

Each track in a session can be assigned a different automation mode, allowing you to, for instance, have one track set to Off, another to Touch/Latch and the remaining tracks set to Read. 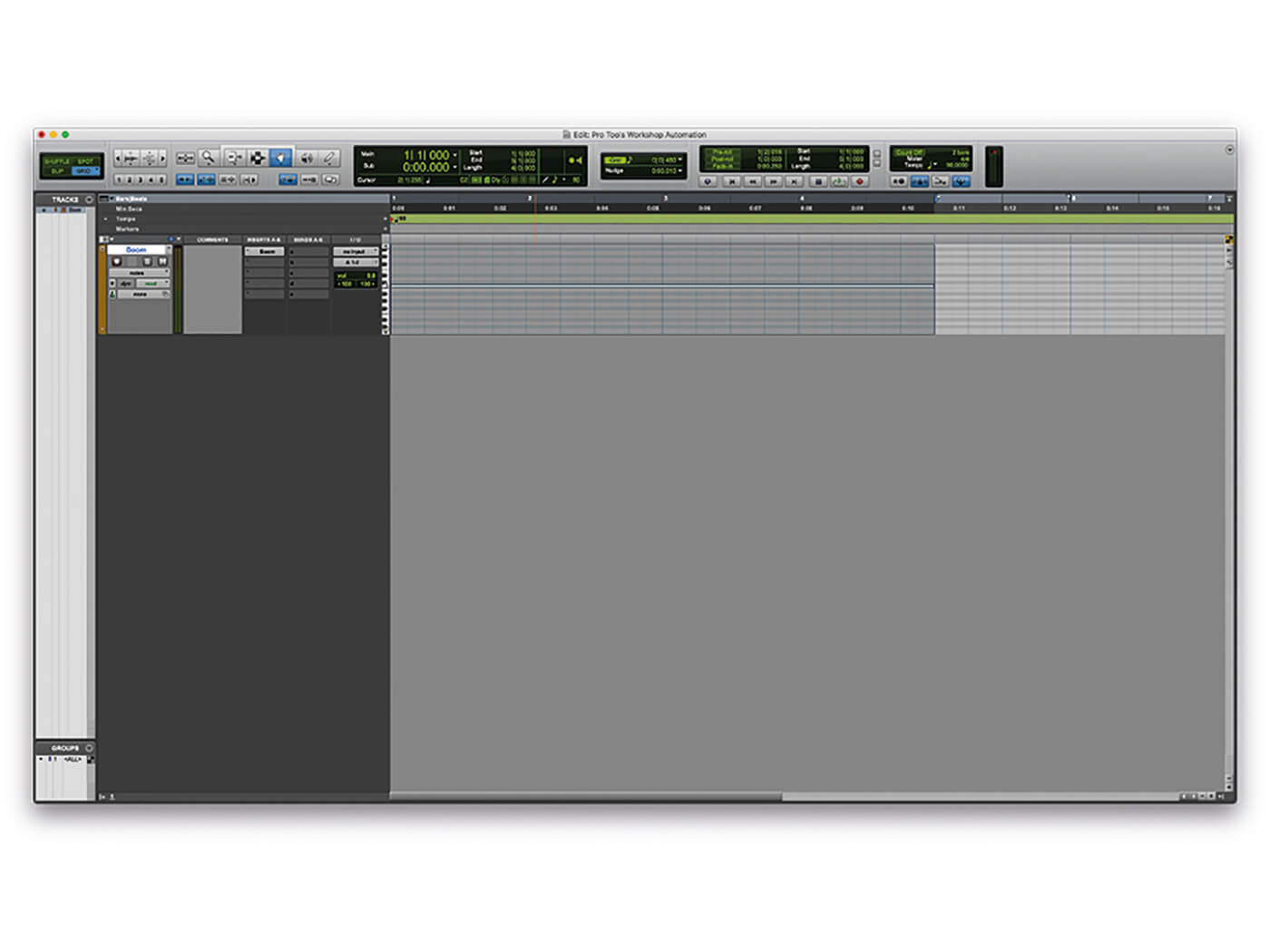 1. Open our example project. We’ve crafted a quick beat in Boom. Hit play and you should be able to hear elements of the mix changing over time. 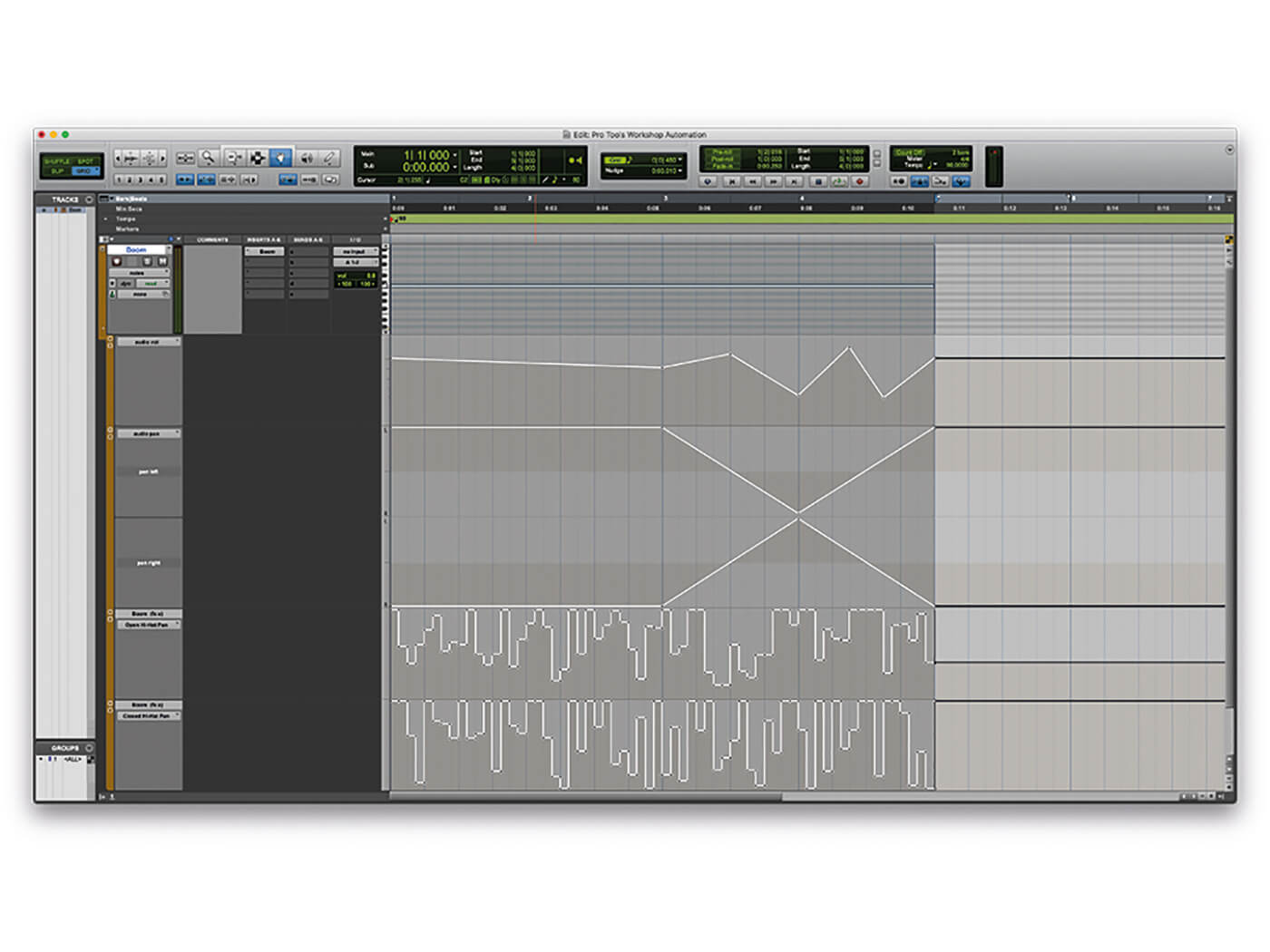 2. To display the automation, click the triangle at the bottom left of the track in the Edit Window. This will show or hide the automation lanes. 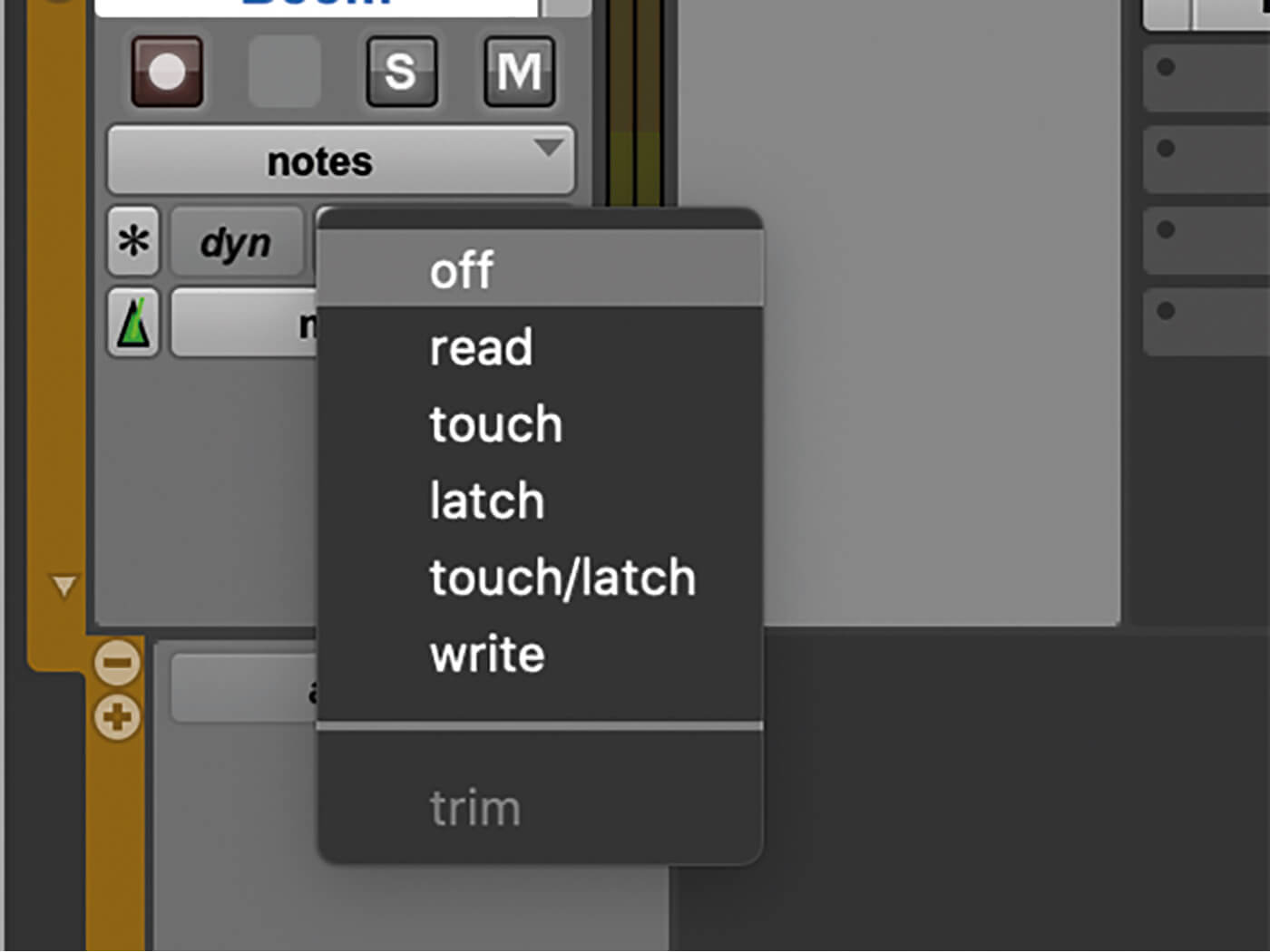 3. By default the automation on the channel is set to Read. Switch this to Off to hear how the loop should sound. 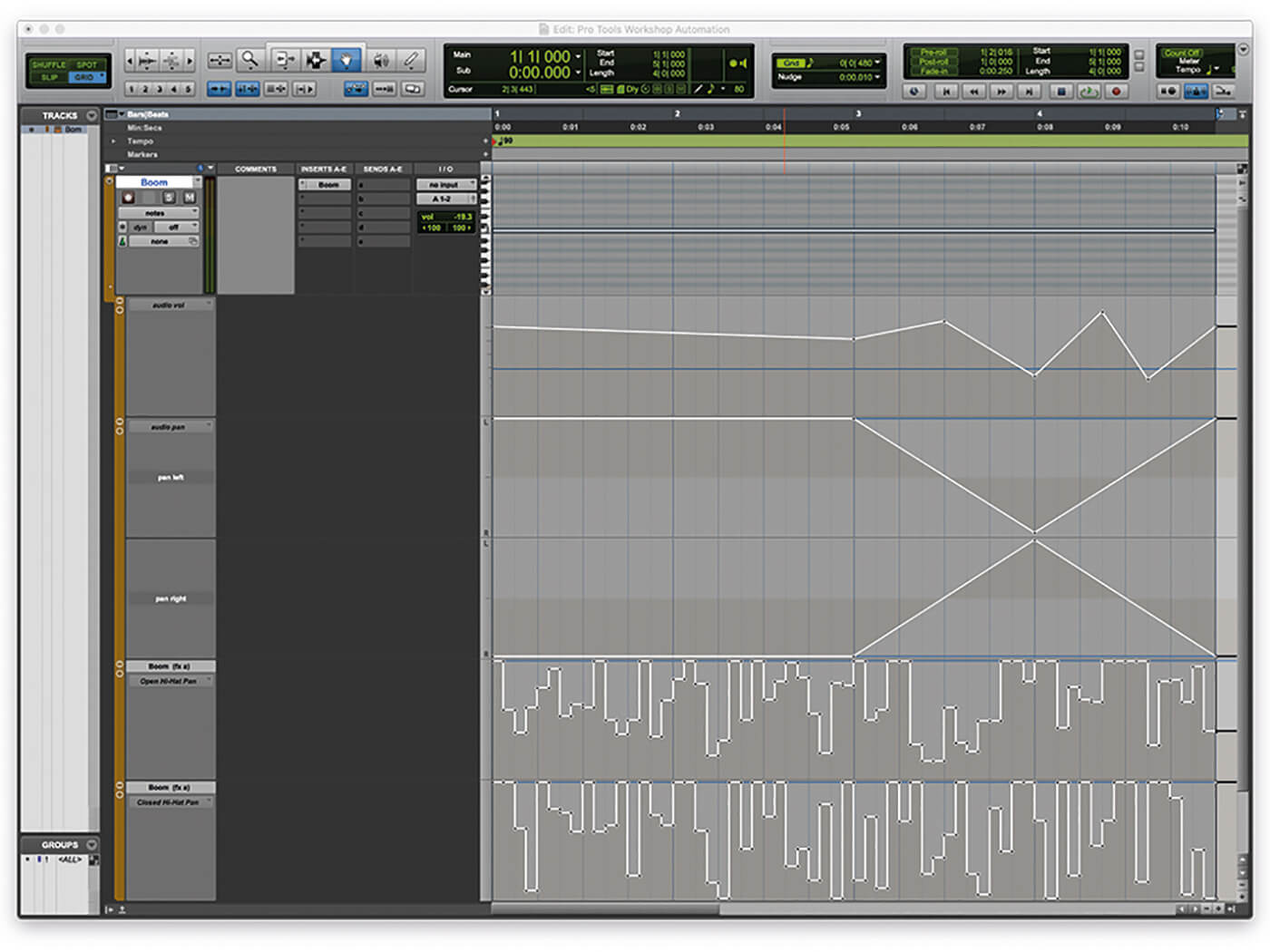 4. You can adjust any of the parameters in Off mode and it will behave as if there was no automation at all. The parameter will remain in whatever position you leave it in. This is displayed by the blue line in the automation lane. 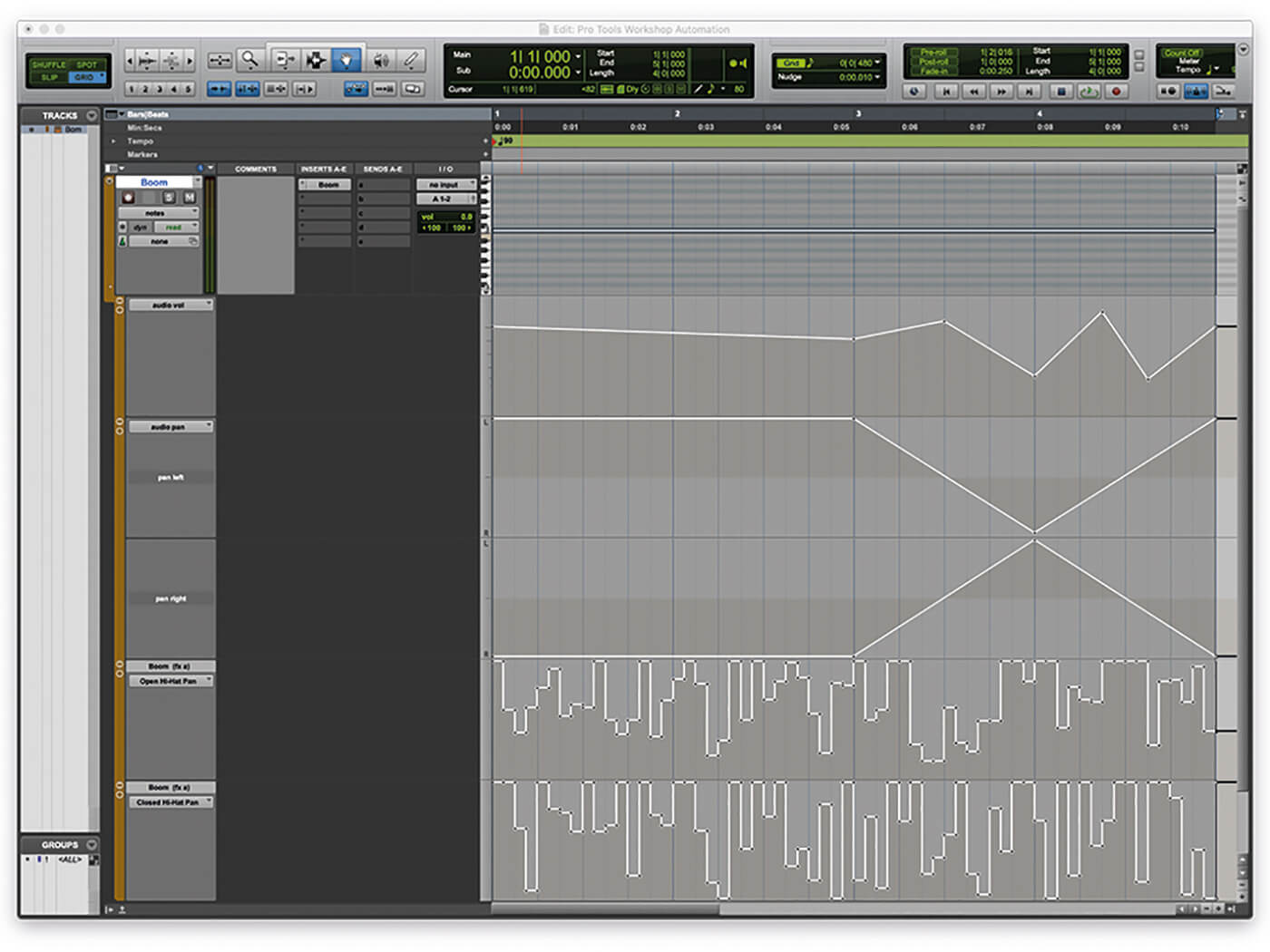 5. Switch back to Read mode and any changes you made while in Off mode will be lost. 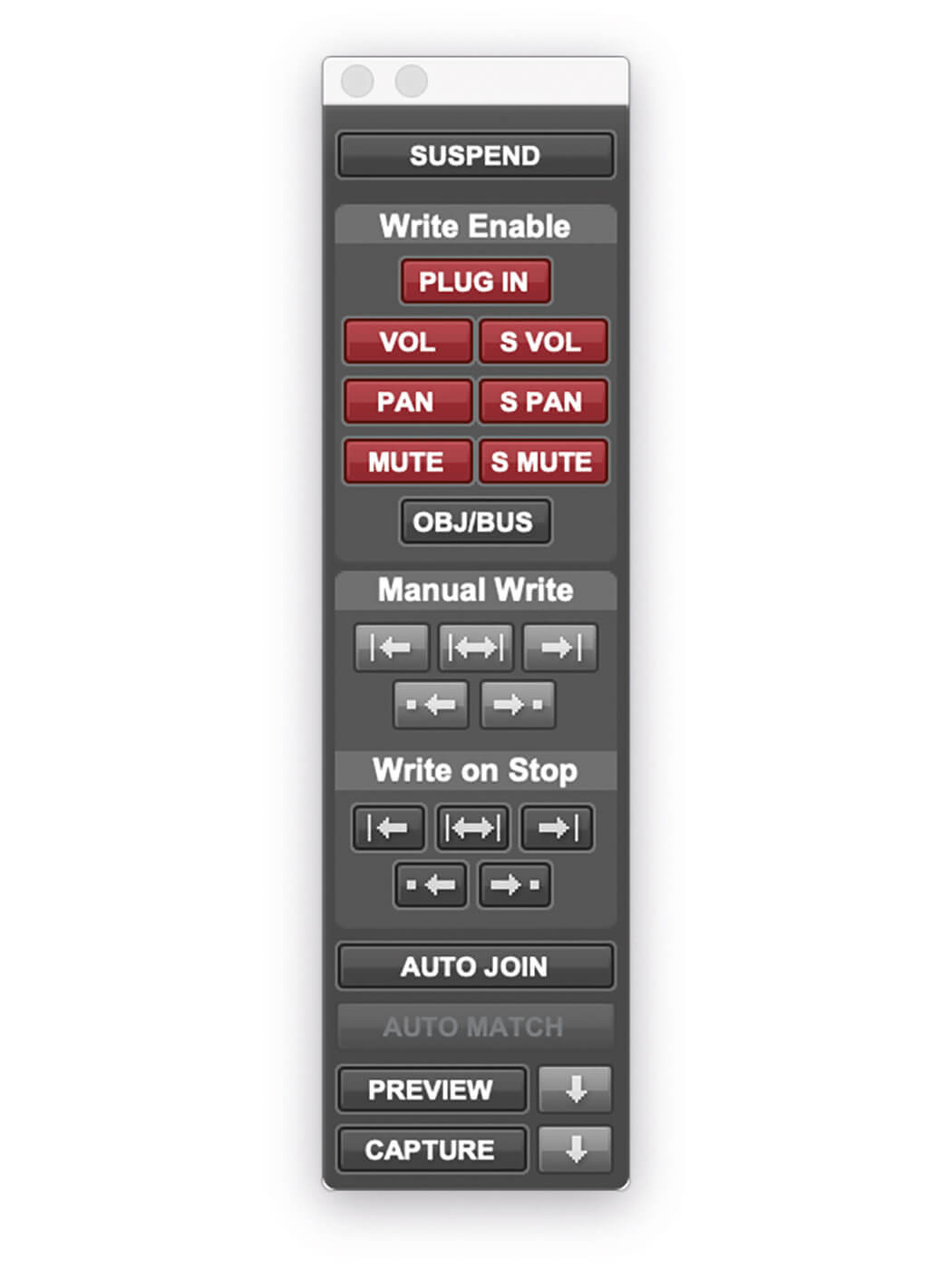 6. Before we write any automation, open the Automation window, Window>Automation, or Ctrl+4 (PC), or Cmd+4 (Mac). The parameters that are highlighted in red are enabled for writing. 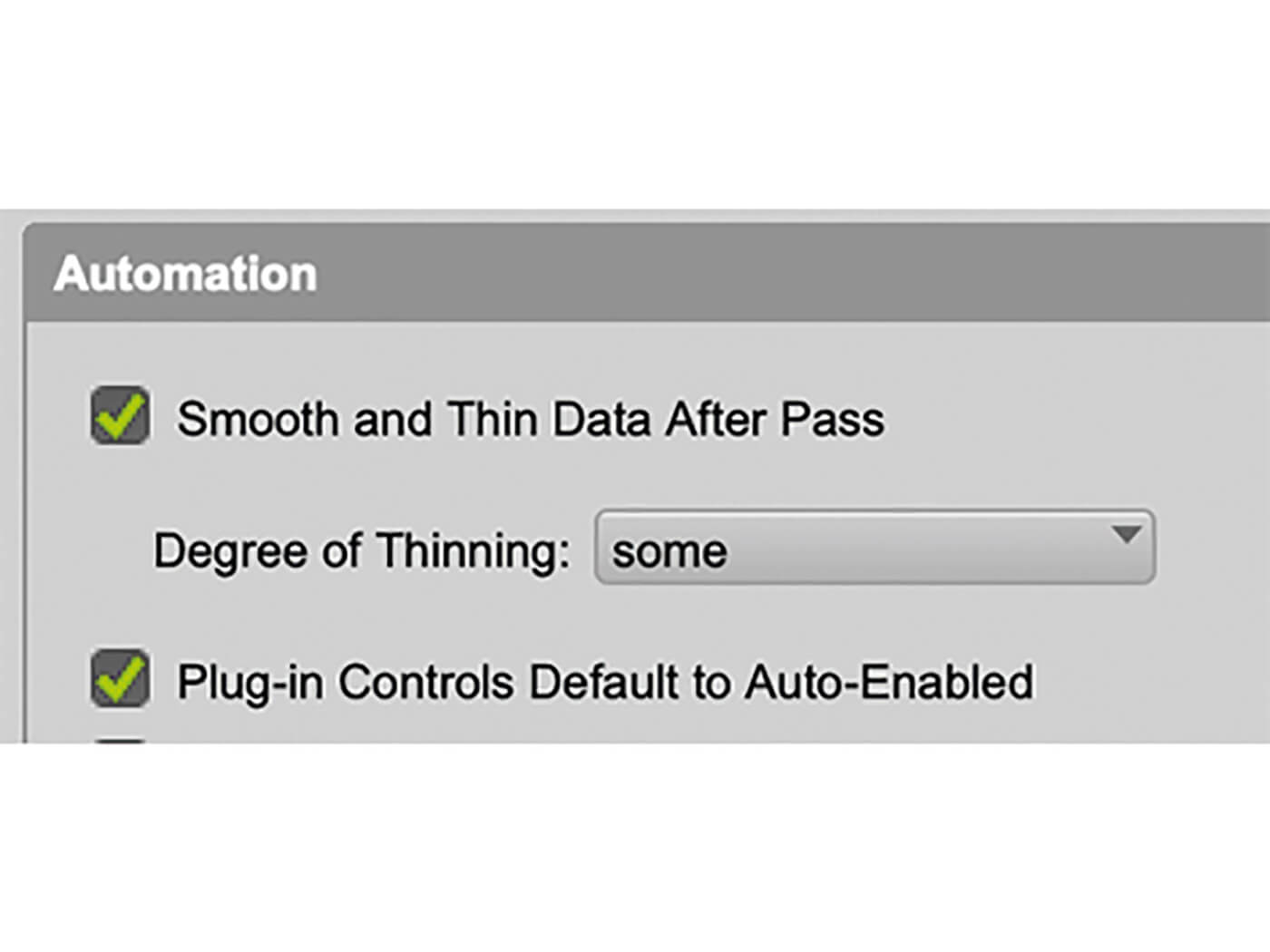 AUTOMATIC FOR THE PEOPLE In the Mixing page of the Pro Tools preferences page you can enable all automation for all plug-in parameters by default, using the “Plug-In controls default to auto-enabled” function.

7. Switch to Touch mode and, using the fader in the Mix Window, record some new automation. Note how this overwrites the previous automation (now shown in red) while you’re holding the fader, but follows the old automation as soon as you let go. 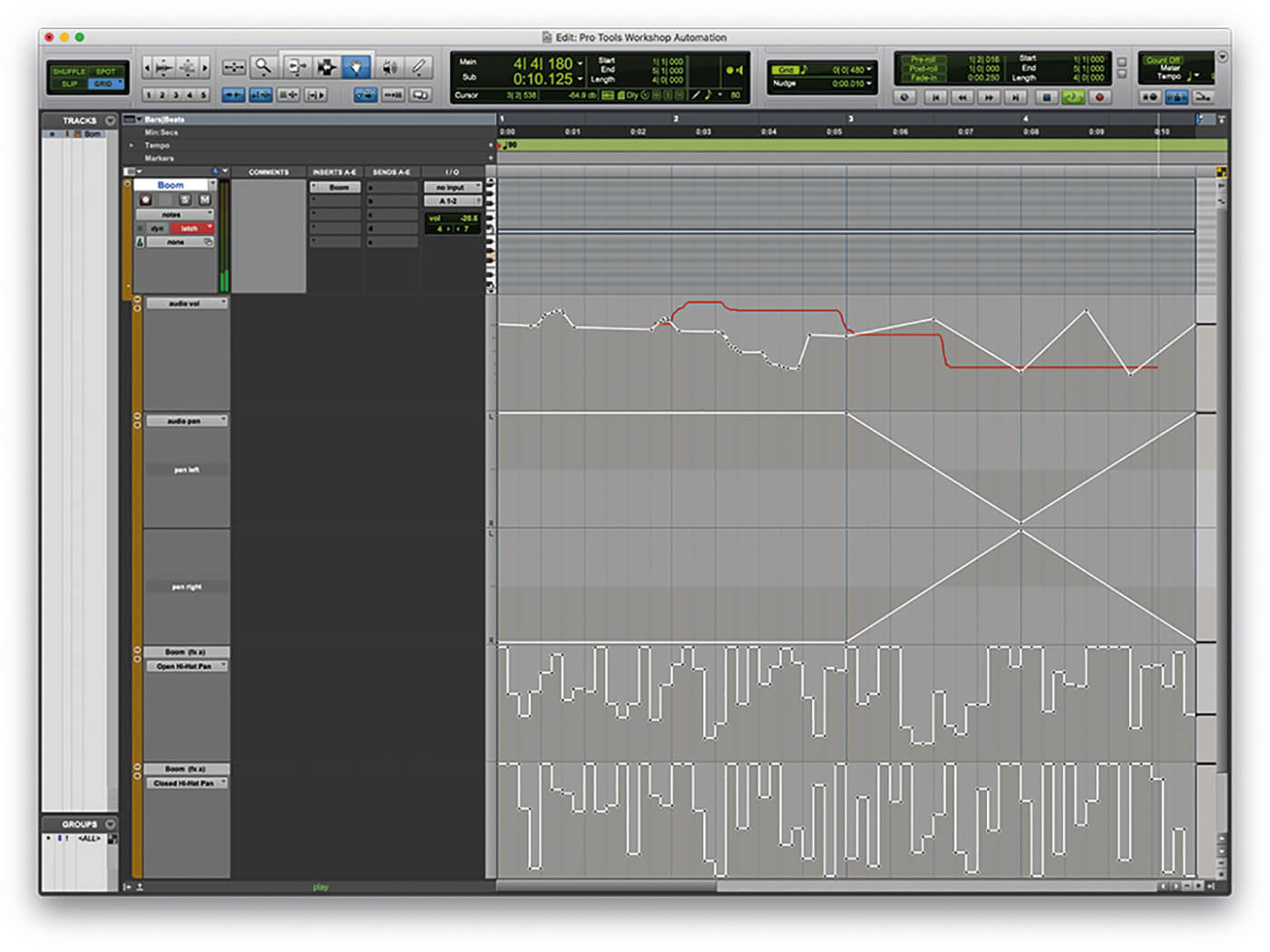 8. Switch to Latch mode and do the same thing to record another pass of automation of the fader. Note how this time, when you let go of the fader, the fader stays where you left it and Pro Tools continues writing over the old automation. 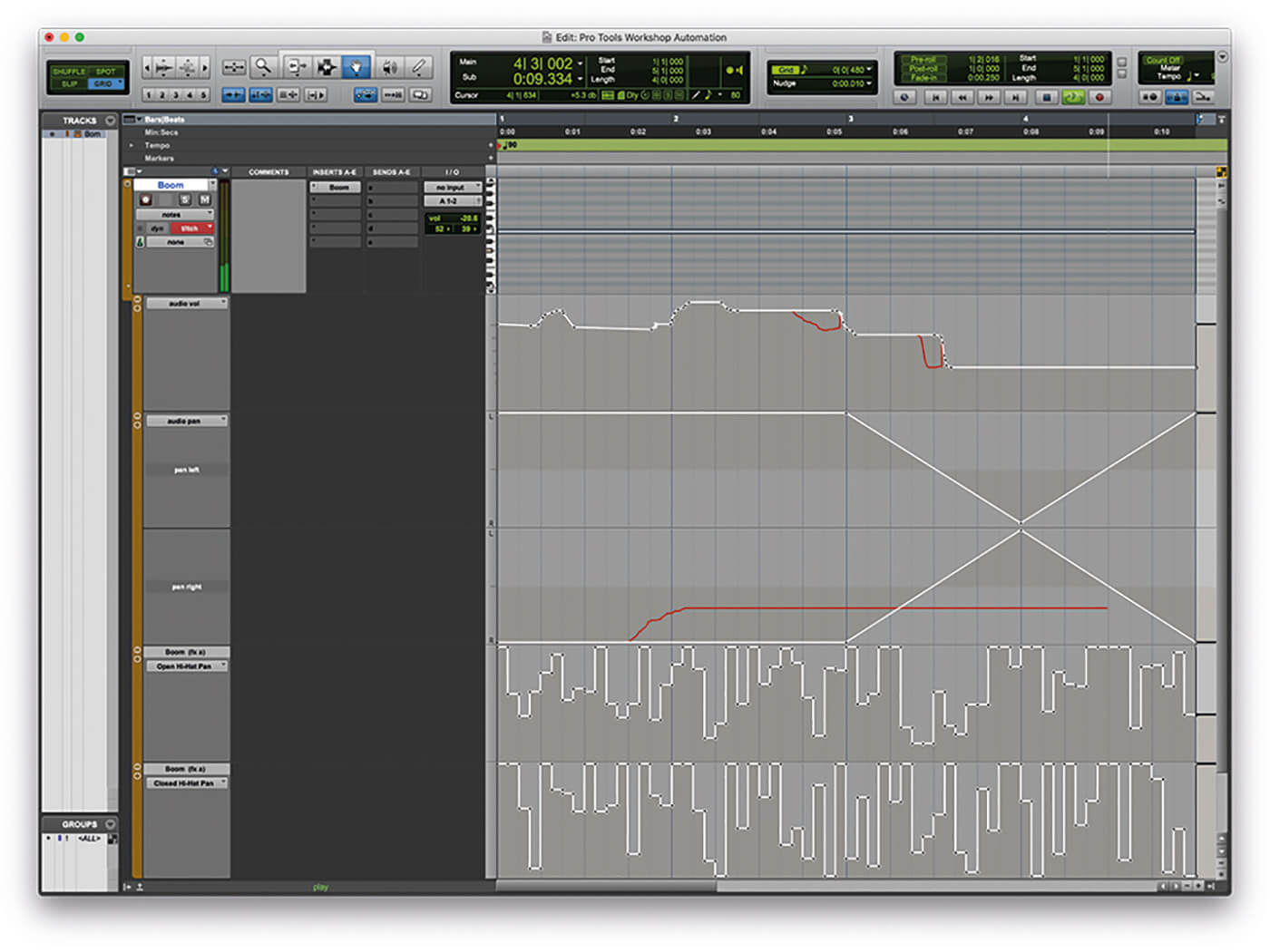 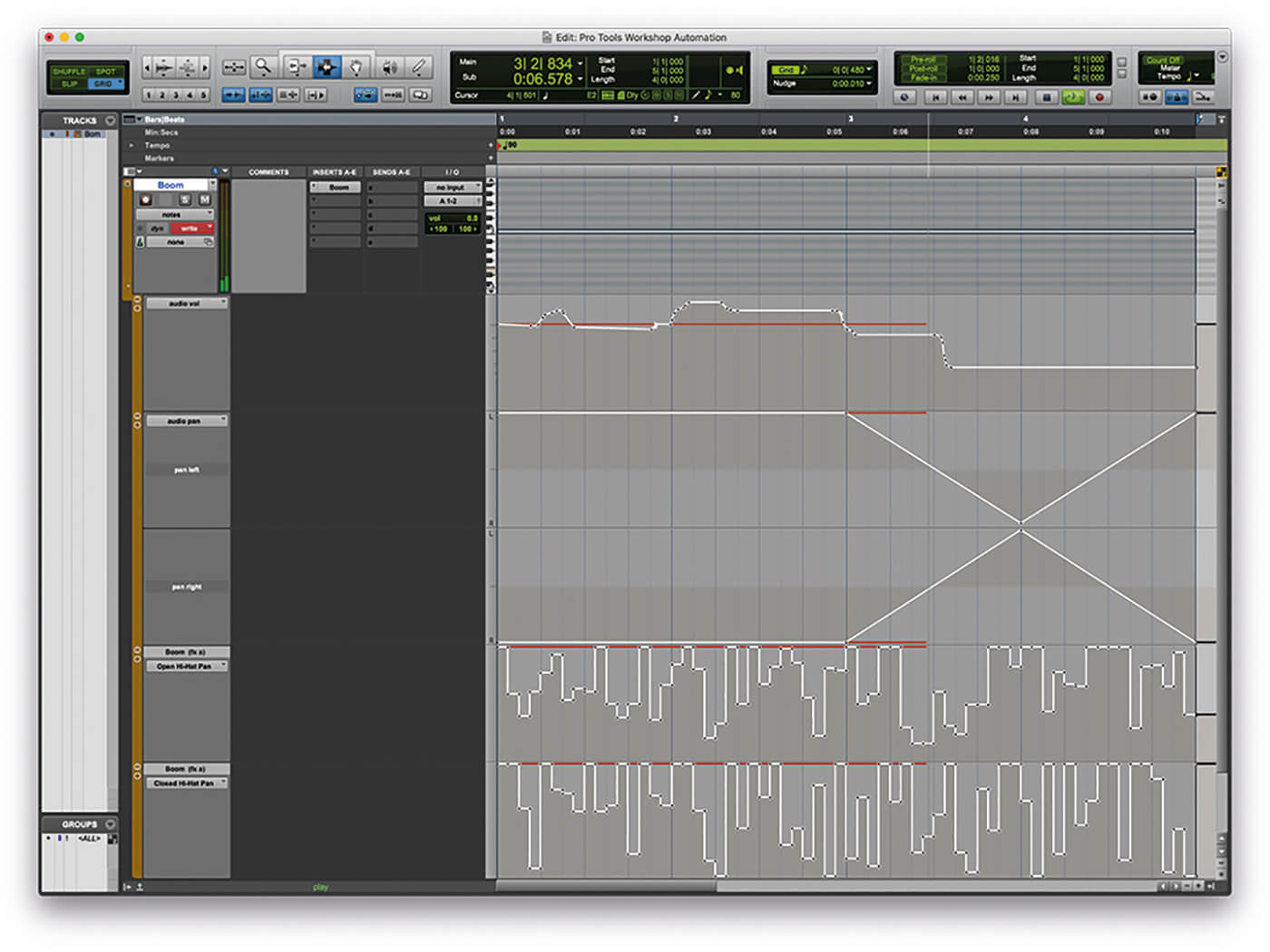 10. Finally, let’s switch to Write mode. In this mode, Pro Tools begins writing automation to all enabled channels immediately, writing over all of the previously written automation whether you are altering that parameter or not. This applies to all enabled automation, not only those lanes currently in view. 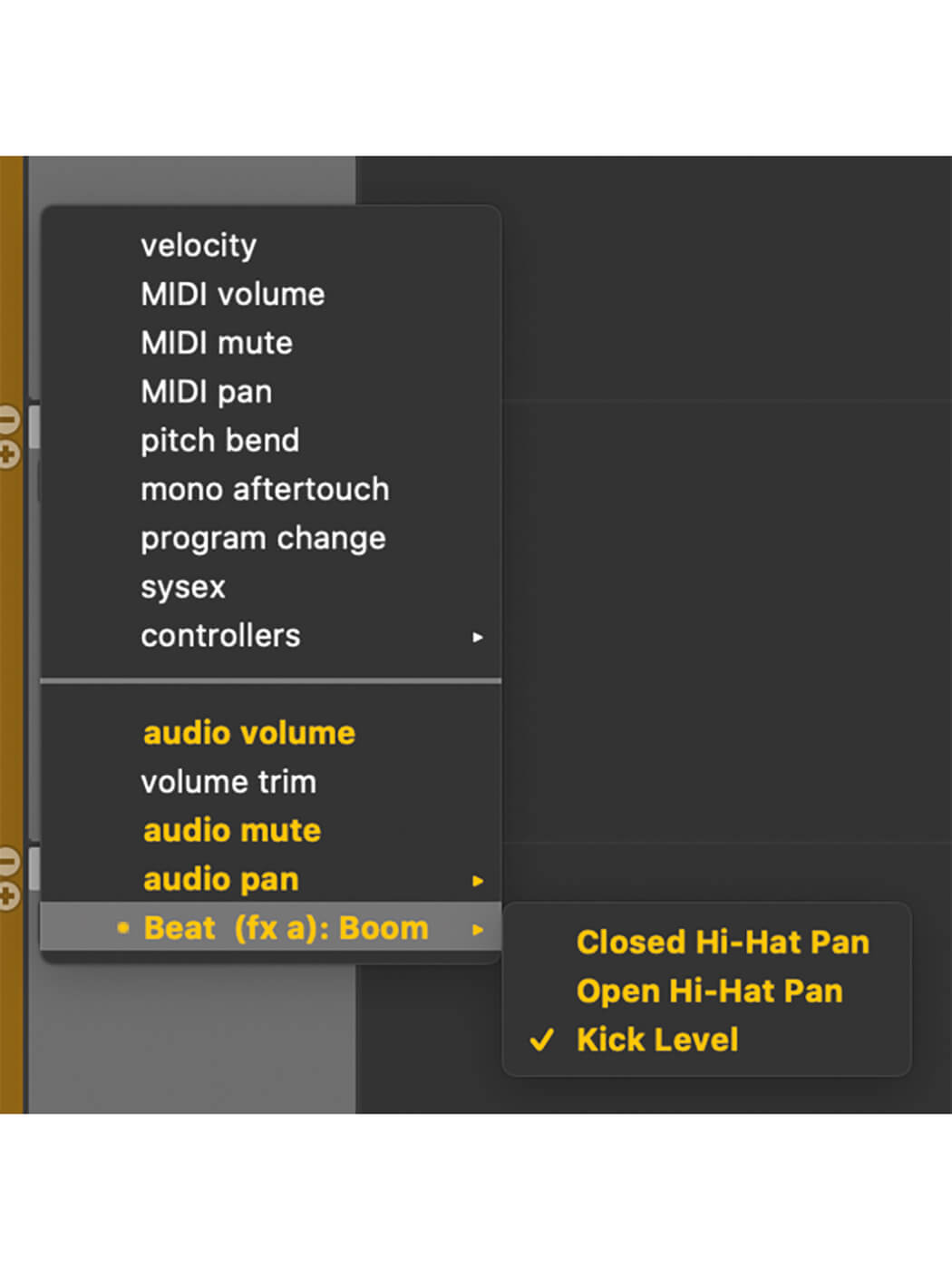 11. Press the + icon to the left of the automation lanes to add another lane, then click on the Lane View Selector to select which lane to view, you can see in Yellow all the lanes with active automation. Even though we haven’t ever muted the channel it now has mute automation. 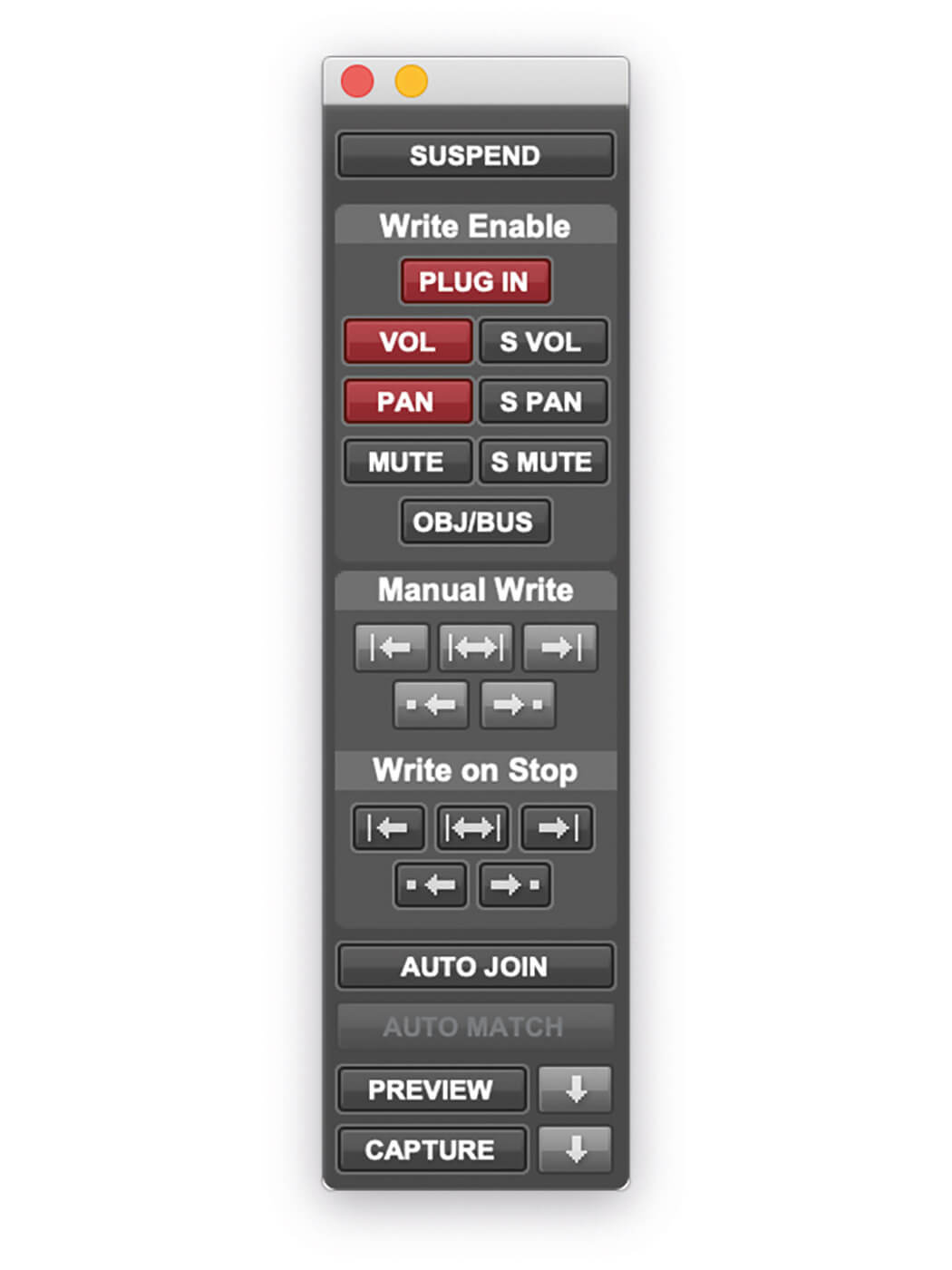 12. Use Ctrl-Z, or Cmd-Z to undo the previous write, then open the Automation Window to deselect all of the automation types you don’t want to write over. 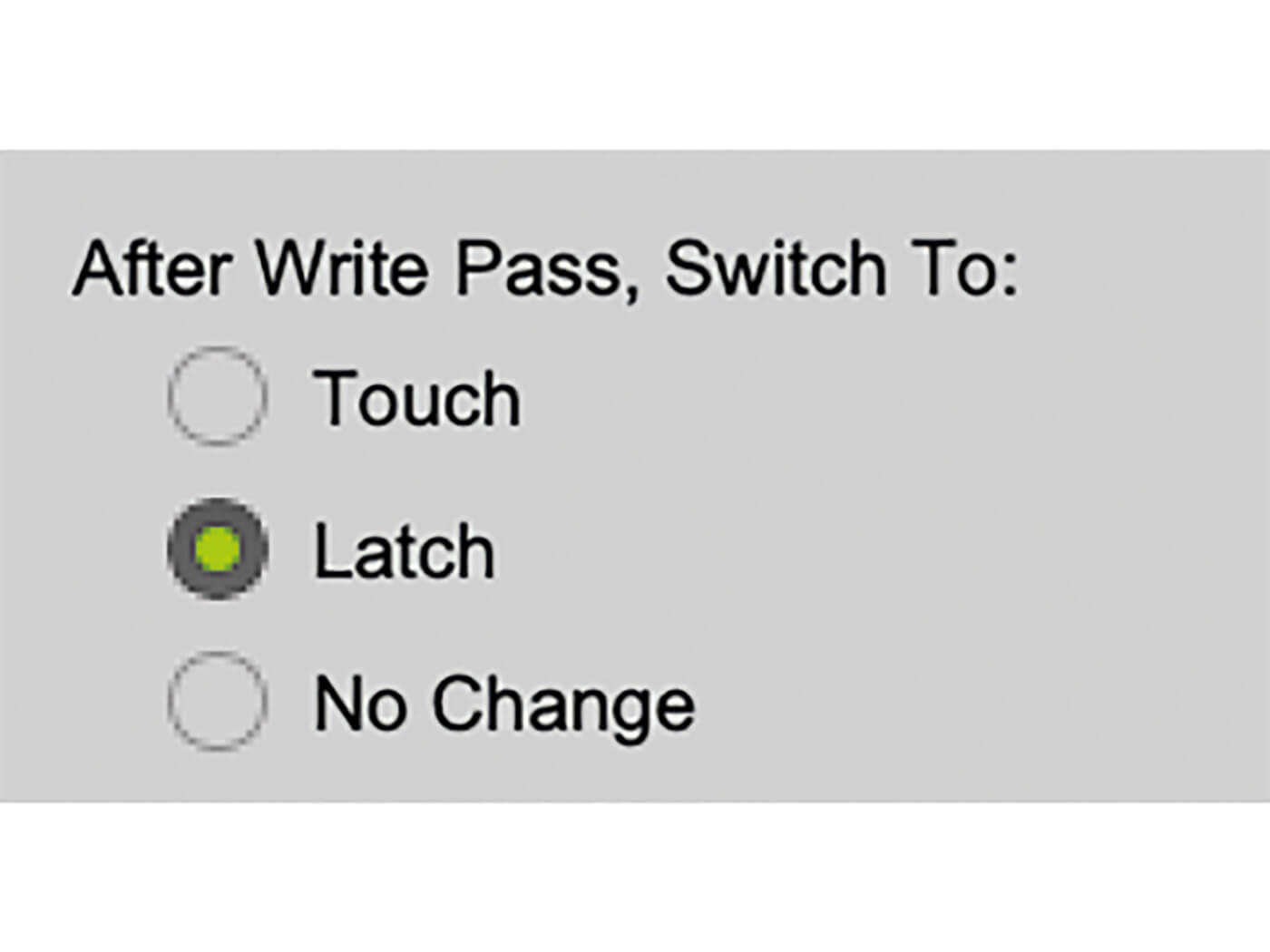 BACKUP YOUR DATA! Also in the mixing page of the Pro Tools preferences page you can set the behaviour of the Write Mode so that it switches to Touch or Latch Mode after you’ve made a pass in Write mode. This will prevent you from accidentally wiping your previous pass. 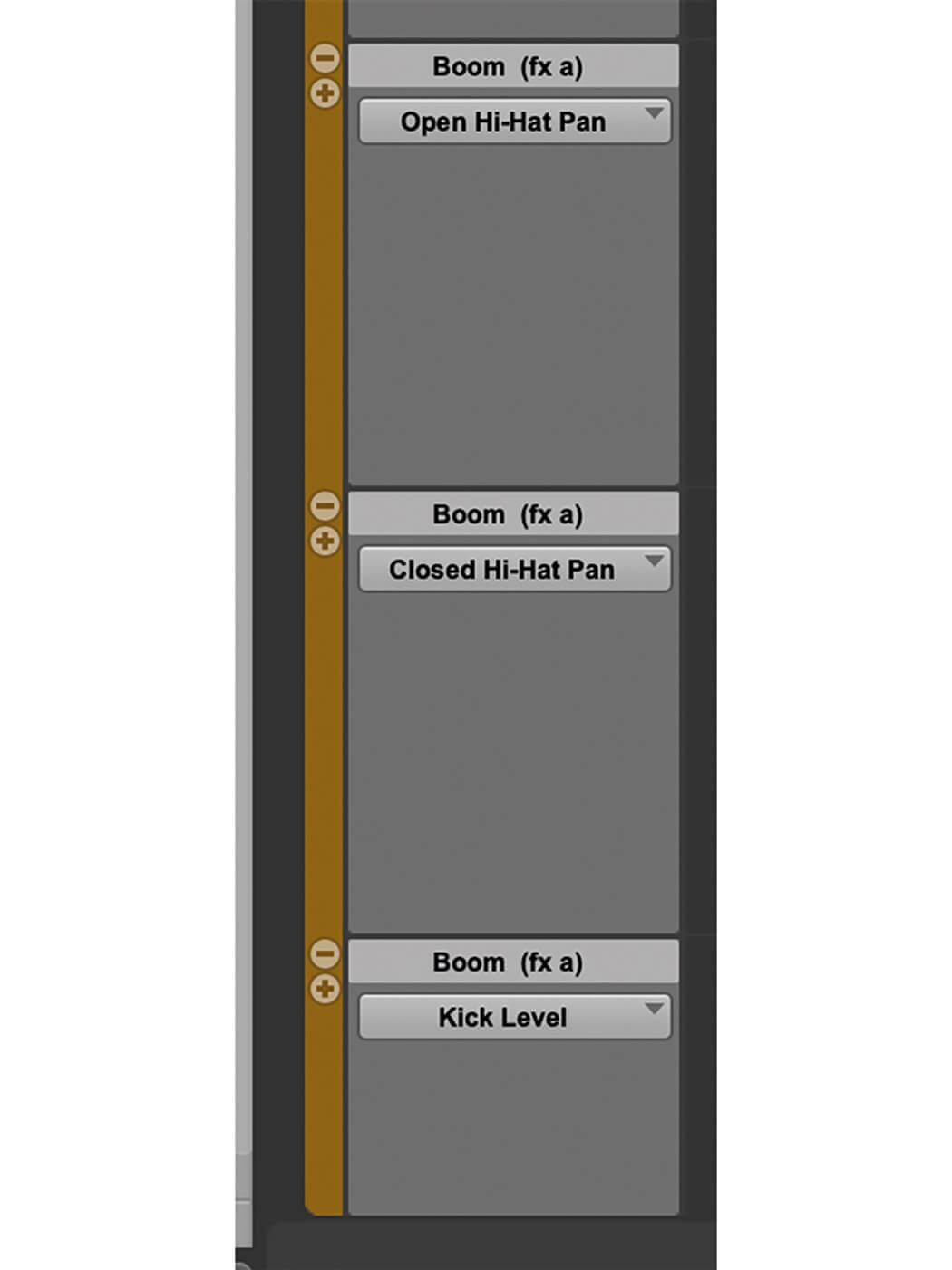 13. In addition to Mix parameters, automation can be written to plug-in parameters. In its current state, you can see that we have enabled automation for the pan positions of the Open and Closed Hi-Hat samples, and for the level of the Kick. 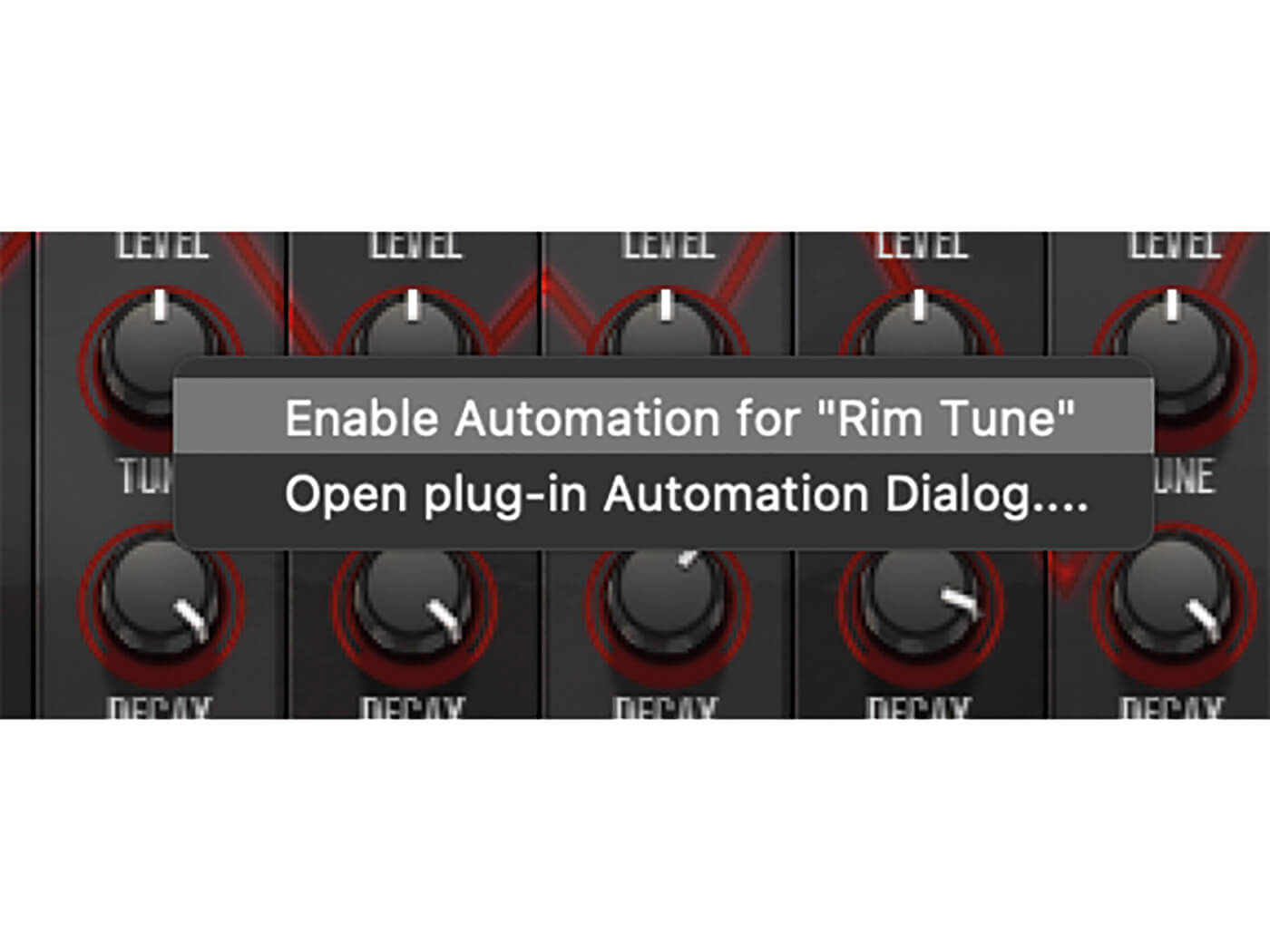 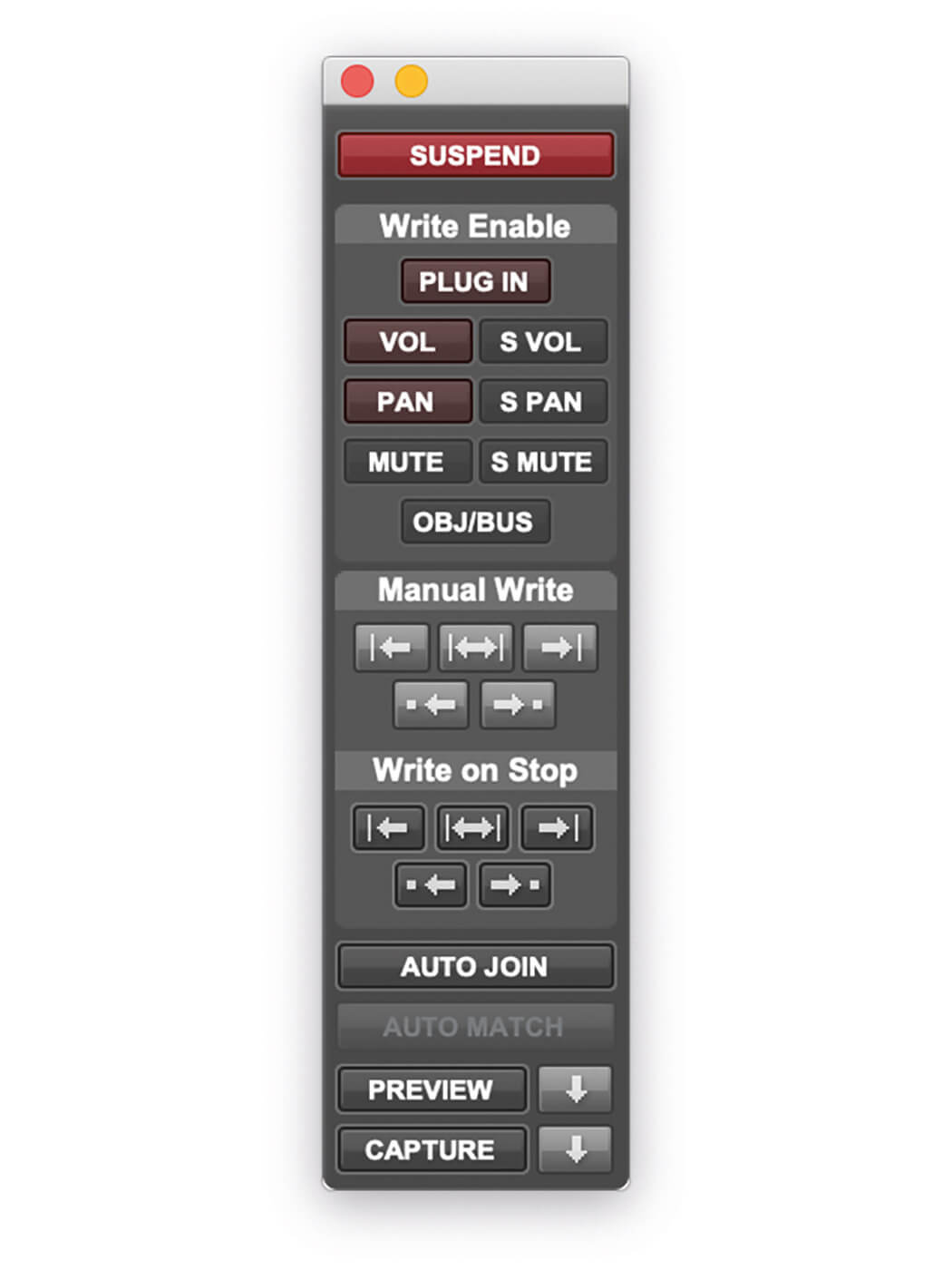 15. Sometimes it can be useful to suspend all automation in a project. Essentially putting all channels into Off mode. This can be done from the Automation window by clicking on the Auto Suspend button. 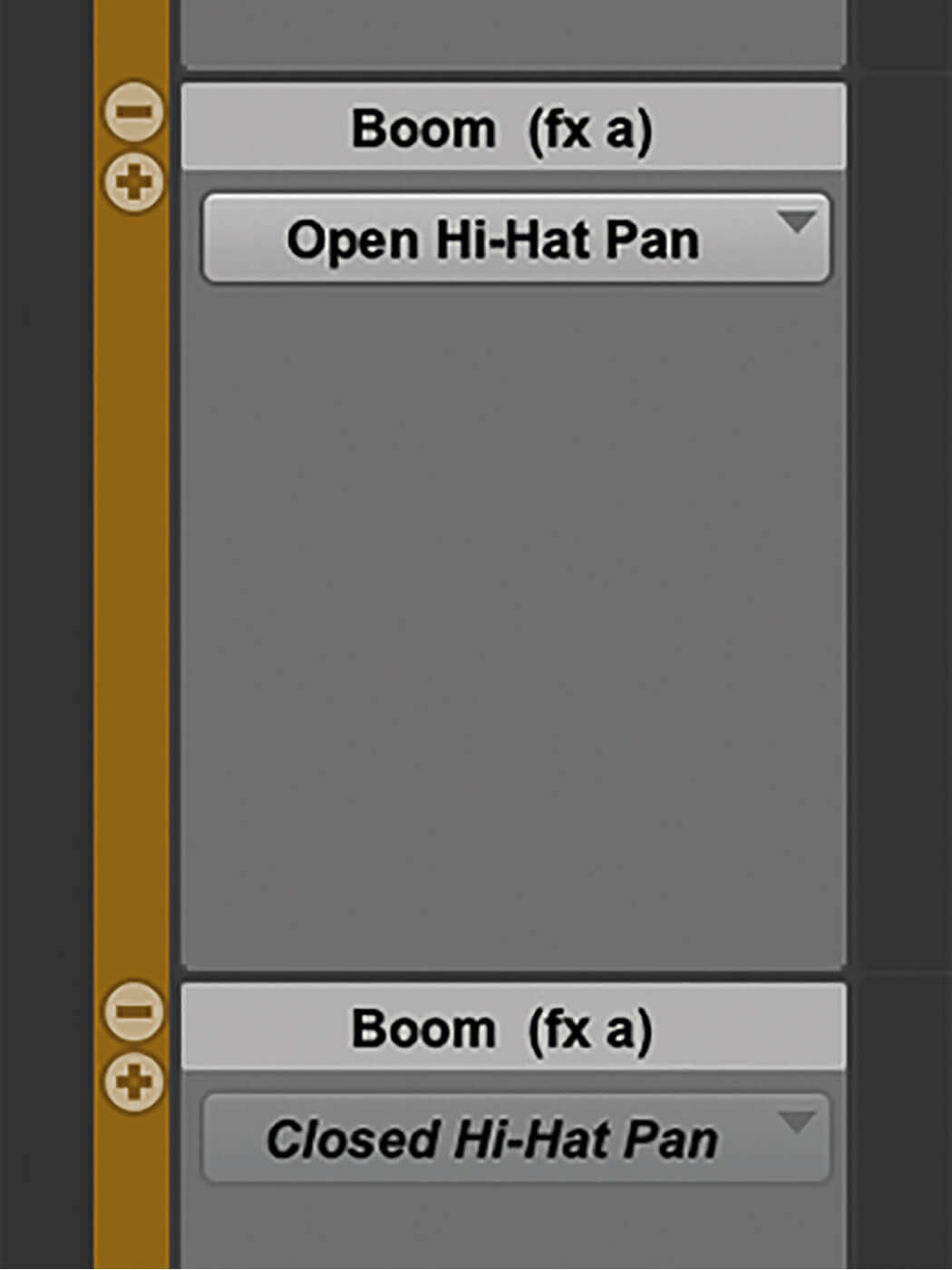 16. Alternatively, you might want to suspend just a single lane of automation on a track. This can also be achieved by Ctrl+clicking (PC) or Cmd+clicking (Mac) on the name of the automation lane on the Lane View Selector button. 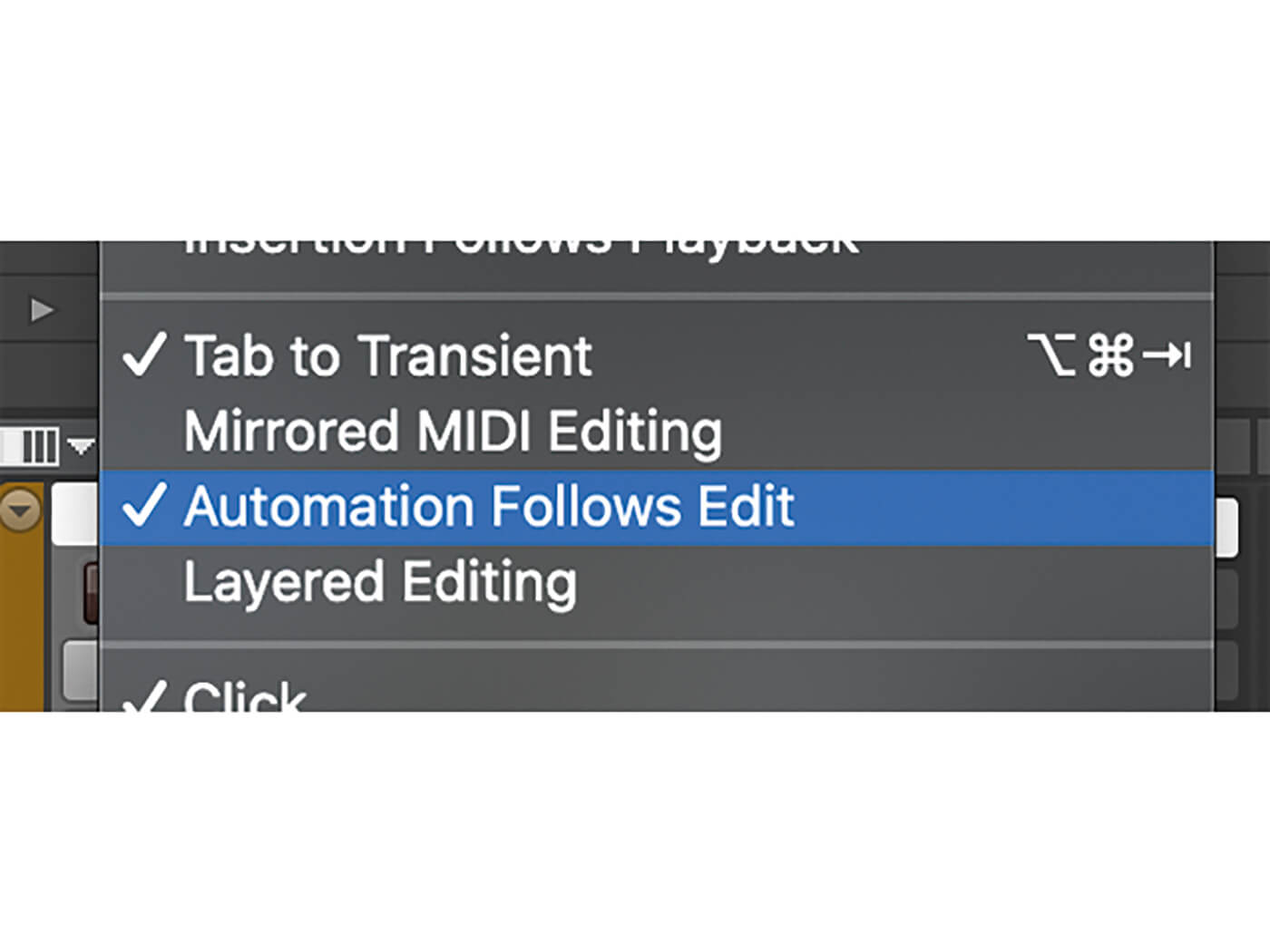 17. By default, any edits made in Pro Tools, for example moving an audio clip from one bar to another, have no effect on the automation. However this can be modified by engaging Automation Follows Edit mode in the Options menu. 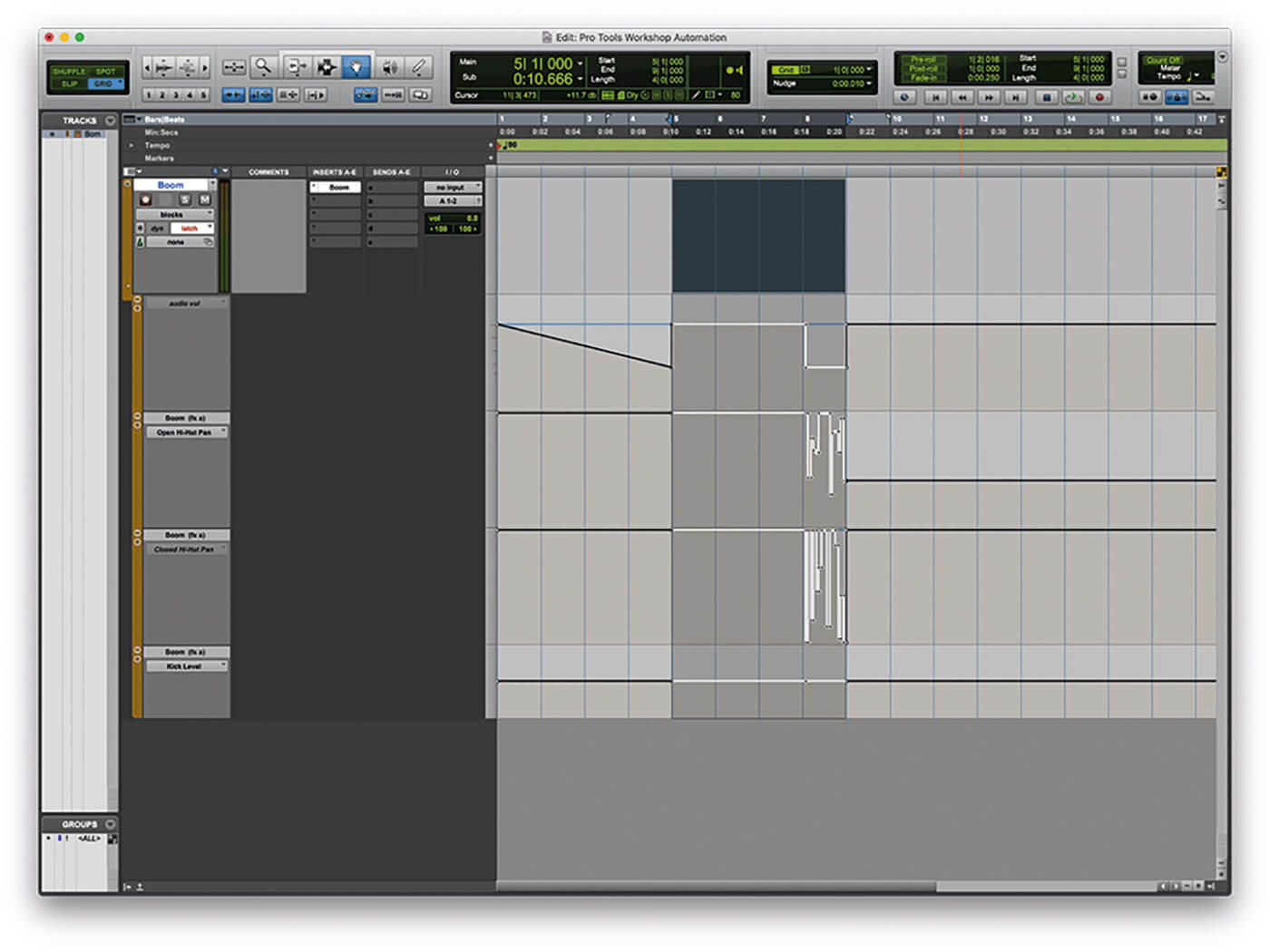 18. With this mode engaged, pick up the one bar loop and move it to a new position in the Edit Window. See how the automation follows the loop. Disengage Automation Follows Edit and do the same. The loop will move, but the automation will stay in the same place.