A rock-solid beat is key to much of today’s music – but after all, every drummer’s only human… Mike Hillier makes the timing right. For this tutorial you’ll need the project files – Download Here Before overdubbing any melodic instruments it is common practice to record and then edit the drum parts. This adds a […] 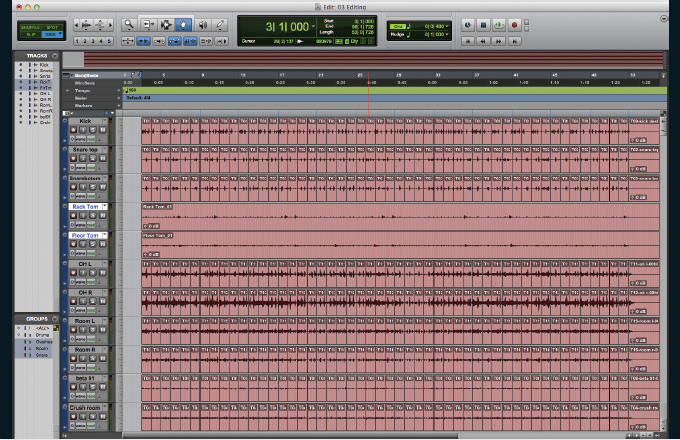 A rock-solid beat is key to much of today’s music – but after all, every drummer’s only human… Mike Hillier makes the timing right.

For this tutorial you’ll need the project files – Download Here

Before overdubbing any melodic instruments it is common practice to record and then edit the drum parts. This adds a little more time to the overall recording process, but means that when the band comes to record the additional parts they are recording them along to the tightly edited drums rather than having to second-guess the performance or play along to a click.

Editing can involve all sorts of activities, from creating a comp track from multiple performances to chopping sections out or copying and pasting sections to change the structure of a song. However, the primary task when it comes to drum editing is quantising the performance itself. How far you choose to go with this is a matter of taste, and, like so many things, down to the performance you managed to capture in the first place.

In this tutorial we’re going to look at an example in which we are aligning only the first beat of every bar, allowing the drummer’s performance to remain largely intact. Frequently we will move the off-beat onto the grid as well to create a solid 1- and 3-count, without moving the 2- and 4-counts or any eighths or sixteenths, but some engineers prefer tighter performances on all of the beats and sub-beats.

To get our drums aligned we prefer to use Beat Detective rather than tools such as Elastic Time since it does a better job of keeping all the different clips in-phase and introduces fewer artefacts into the signal, since there is no time-stretching taking place.

Once the drums are quantised you can bring the band back in and begin overdubbing the remaining parts. Start with the bass and rhythm instruments and then edit these so that they are tight to the drums before further overdubbing lead instruments and vocals. This will ensure that the vocal is being performed over a solid bed, and the vocalist’s true performance can be captured without having to edit a great performance into time because you’ve later shifted the drums around.

Tightening Up A Drum Performance 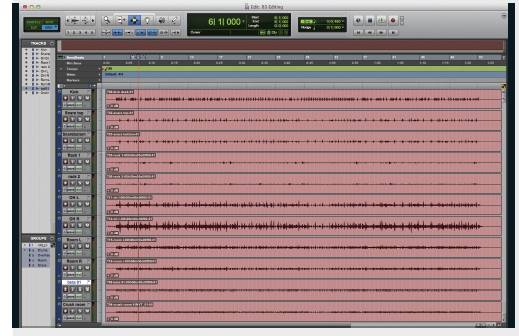 1: Open the 03 Editing session file from the Project Files. This session contains a multitrack drum recording, tracked at Freefall Studio UK with Antonio Hanna. The drum recording is far from sloppy, but it’s not really very tight, either. Thankfully, it was tracked to a click at 150BPM, so should be easy enough to tighten up. 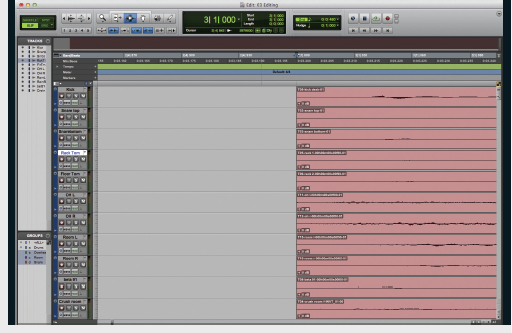 2: The start of the tracking contains four stick hits as a count-in; this might be useful later on for tracking the rest of the band, but it isn’t something we’re going to want to reach the end of the mix. Ensure the All or Drums group is engaged and use the Tab to Transient tool – [Ctrl]+[Alt]+[Tab]/[Cmd]+[Alt]+[Tab] (PC/Mac) – to place the cursor at the first actual hit, then press [A] to delete the audio before the marker. 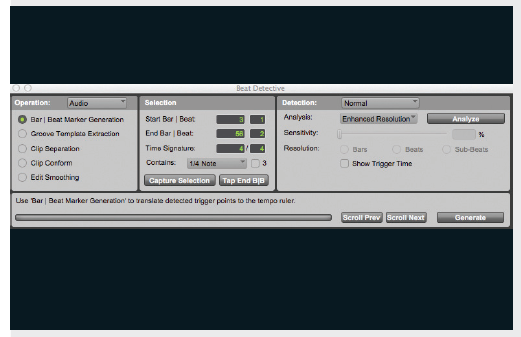 3: There are several options for tightening up drums, but our favourite is Beat Detective. Not only is it incredibly powerful, it also produces (to our ears) the best results, and as no time-stretching is used there are no strange artefacts added to the signal. Highlight all of the drum tracks and launch Beat Detective by pressing [Ctrl]+[8]/[Cmd]+[8] (using the [8] on the number pad only). 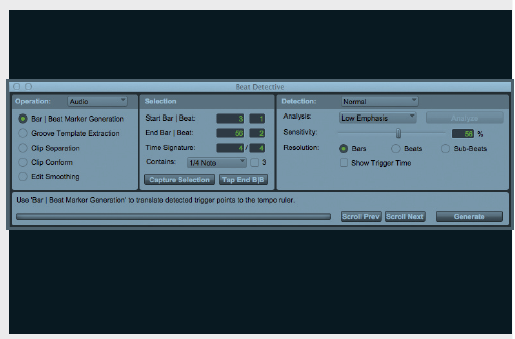 4: In Beat Detective, set Operation to Audio and select Bar | Beat Marker Generation. In the Selection sub-section you define where the audio should start and end (Capture Selection can achieve this too). Select Contains 1/8 Note and, in the Detection sub-section, switch to Low-Emphasis. Press Analyse, then bring up the Sensitivity slider, with Resolution set to Bars until you see a marker at every bar. 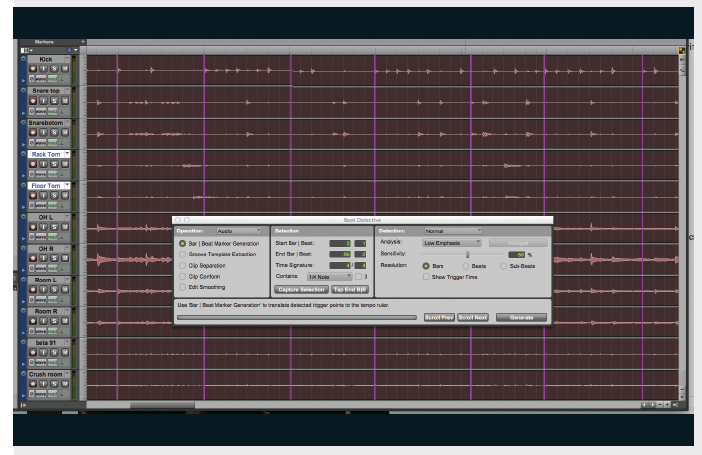 5: Beat Detective is good, but it’s not perfect. Hit [T] to zoom in ([R] to zoom out) and delete any markers that look like they aren’t where you think the first beat of the bar should fall. We found our first bad marker at bar 10 and a missing marker at bar 12. Hold [Alt] and click to delete the marker (usually a new marker will pop up at a more suitable position). If not, add additional markers by double-clicking. 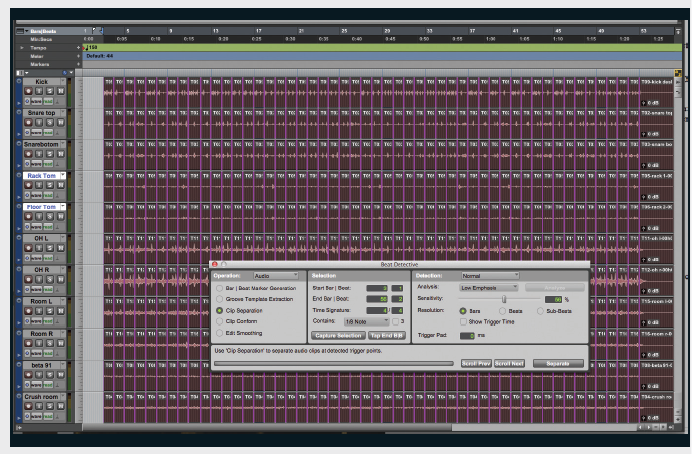 6: Once you’ve defined your markers move to Clip Separation in the Operation sub-section of Beat Detective and press Separate. This creates edits at every bar/beat marker. Don’t click the Generate button when in Bar | Beat Marker Generation mode as this will place tempo changes through the track to match the original performance. 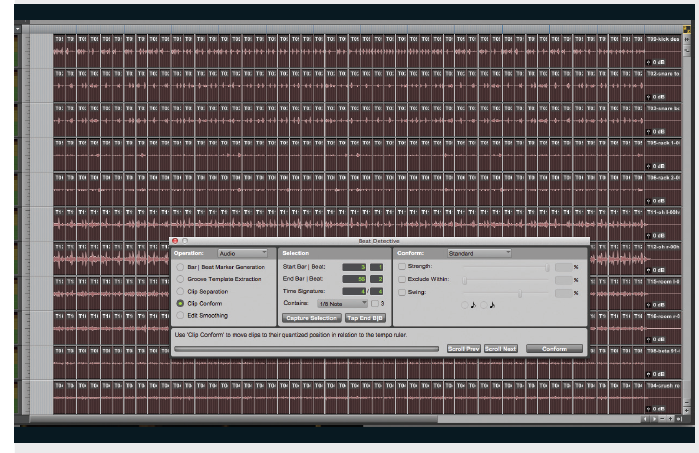 7: Now move to the Clip Conform mode in the Operation sub-section and select Conform. This moves all of the new clips to the correct beat marker. You can play with some humanising features here, such as bringing in the edits by a percentage of the time rather than entirely on-the-grid. However, as we’re just getting the first beat of each bar in time, our performance will still sound quite human. 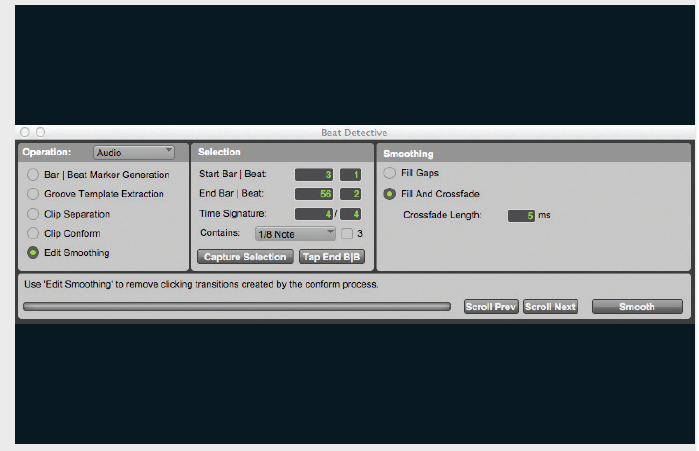 8: If you press play now the audio will sound a little jumpy as some sections cross over each other and others are pulled apart. To fix this, switch to the final Operation mode: Edit Smoothing. This will fill the gaps with room tone and place short crossfades between overlapping clips. Set Smoothing to Fill And Crossfade and set a crossfade length (5ms is usually sufficient).

9: Once you have finished editing the drums using Beat Detective you should have a performance consisting of hundreds of clips and crossfades. This is fine, but it can make future editing complicated, so it can be useful to group or consolidate each channel into a single clip. We’ve looked at grouping already; to consolidate the clips, highlight them all and press [Shift]+[Alt]+[3]. 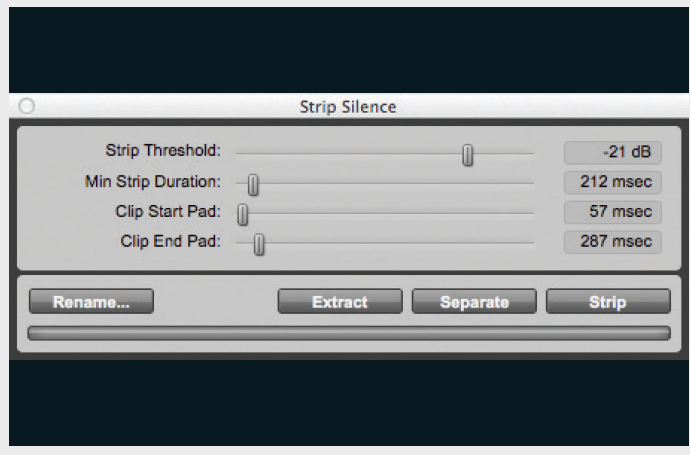 10: Rather than let the bleed from the toms interfere with our mix, we’re going to mute the tom channels when they’re not being struck. Rather than using a gate to do this, we’re going to edit out the silent parts. Unselect the Drums and All groups and highlight just the first rack tom. [Ctrl]+[U]/[Cmd]+[U] opens the Strip Silence tool. 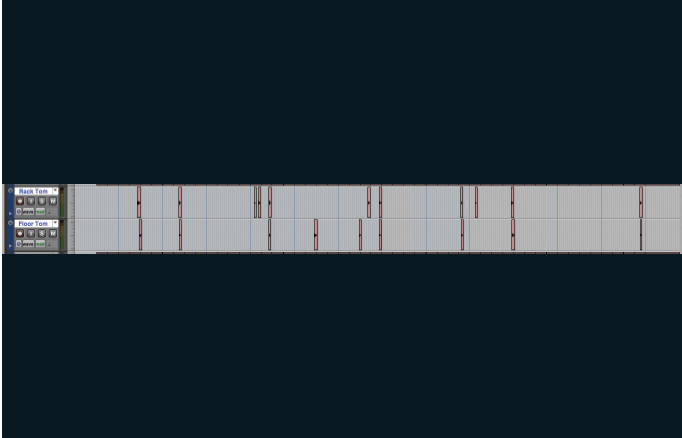 11: Lower (or raise) the Strip Threshold until you can see only the tom hits being let through. You can apply a minimum duration to ensure a certain length, and you can pad the start and end to ensure the full tail of the hit passes through unedited. There’s nothing worse in a mix than a tom edit cutting off the end of the tail. Repeat this for the second rack tom and then listen to the tracks solo’ed. 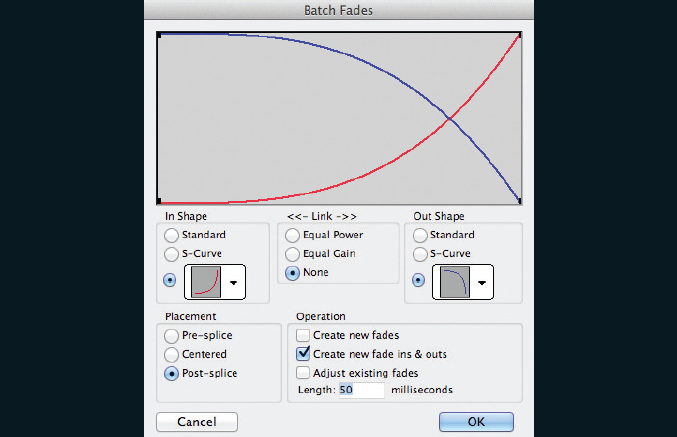 12: Now that you’ve created a whole load of clips it’s a good idea to create short fades in/out of each clip. Doing this individually would be very time-consuming, so instead highlight all of the edits and do a batch fade-creation using [Ctrl]+[F]/[Cmd]+[F]. Set the Operation to Create New Fade Ins & Outs and set an appropriate length. Keep this short to prevent the fade from affecting the tom hits.