Preparing Your Mix in Studio One 4

In our opening Studio One workshops we got a very basic arrangement together. Now it’s time to tidy it up and prepare it for the full song arrangement process… 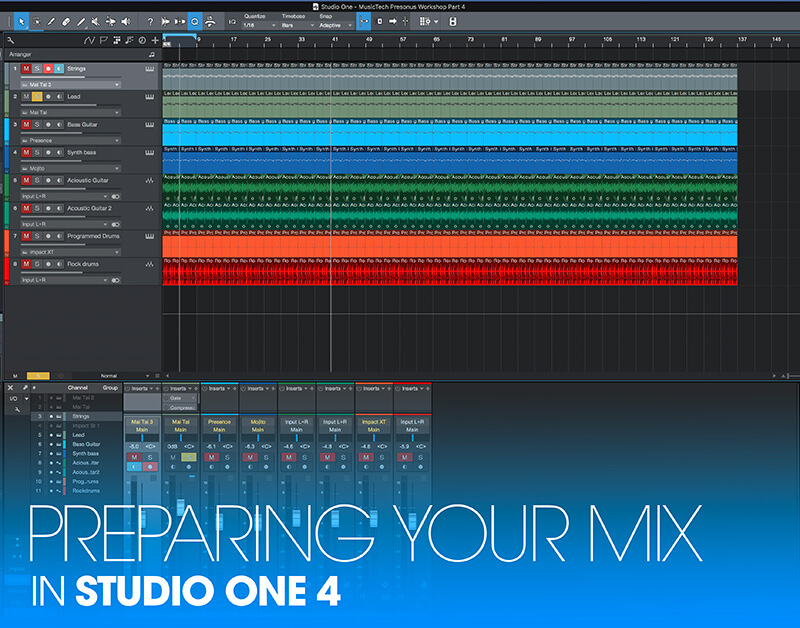 The first three parts of these Studio One workshops explained the basics of Studio One and how to put a song together with both MIDI and audio tracks. We then created a simple looped arrangement over half a dozen tracks. Now it’s time to expand on that and prepare what we have for the process that some regard as the most important in music production: the mix.

In this tutorial we will take you through the entire preparation and arrangement process. It will essentially take what we already have and hopefully turn it into a full song that is ready to mix. Most importantly, it will be a song that you will want to return to, because in the next part of the process as we are going to tidy it up and make it logical and fun to work with.

If you are anything like us, you’ll compose with your DAW by putting ideas together in an arrangement in a fairly rough and ready way. That might mean loads of loops just thrown in there – hey, if they sound good then use them – or it might mean tracks put together in a random order.

The first part of the arrangement process should really be a tidying process; name the tracks correctly, group them physically together by type and make everything on screen that much more approachable and logical. If you get this right, it could make the mixing process that much shorter as you’ll be editing parts in a more intuitive way.

Studio One has some cool ways to make things more approachable and we’ll cover a few of those in the workshop, taking our messy set of loops into a more professional realm. But the first one is to actually name tracks in a consistent manner.

Next up it’s colouring them. You may not think this is important, but once you start working with DAW tracks, anything that makes your next action more intuitive is going to speed up your workflow. If you are a dance music producer, where beats are so important, then having all your drums in red, for example, means you’ll be drawn quickly to the different beat tracks.

There are no hard and fast rules here. Some people like to colour their tracks based on the colour of the physical instrument (piano equals brown, for example). We’ve gone more for linking letters, so guitar is green and bass is blue but we’ve kept the drums red.

Of course, one of the best ways to get a song together – and what DAWs do best – is repeating parts. We’ve done just that to start our song and then stripped parts of it back to produce a very rough song structure. It’s also way too short, but don’t worry as Studio One has a neat feature to help you turn it into a full-bodied song.

The Arranger Track allows you to section parts of the song, creating intros, verses, choruses and more. You can then drag these by their header and everything musical associated with them – MIDI parts, audio parts, chords and so on – goes with them. You can duplicate them and drag them to your heart’s content, until you have a finished song on your hands.

So, by the end of this workshop we’ll have a complete work, but one that demands mixing. which is a good job, because next time around we will finally begin that mix, so join us again then!

Preparing your mix in Studio One 4: step-by-step 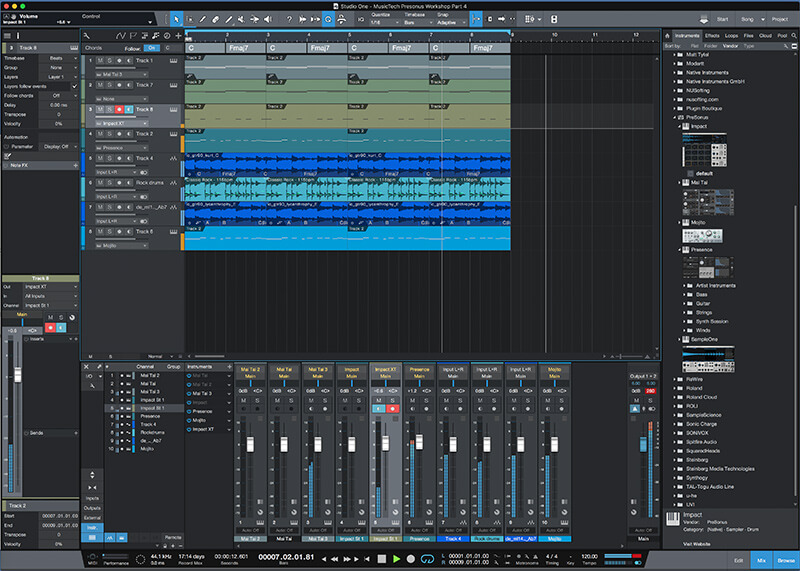 1. We had a very basic arrangement, last time around, of only about six tracks cycling around eight bars, so we’ve expanded upon that with two extra tracks, but it’s still very basic. But before we start arranging, let’s at least make it look better. 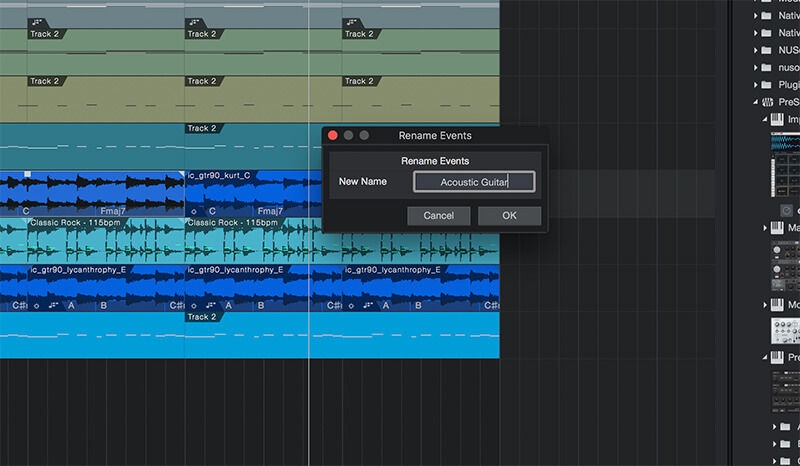 2. Start by renaming tracks/events to what they actually are, rather than the file names of the samples that you used. If you have more than one type of track – acoustic guitar, for example – then number them logically. Be as clear and consistent as you can here. Use Menu Event>Rename or Control/right click on each to rename. 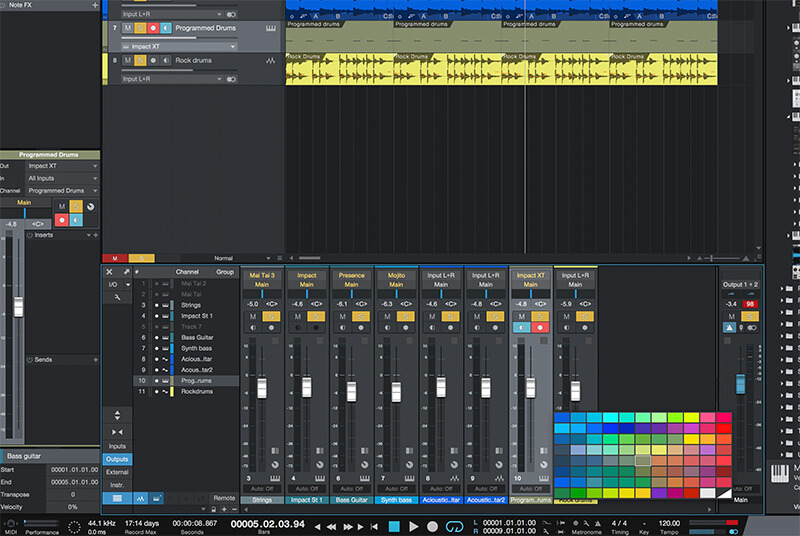 3. Next, colour each track logically. Guitars could all be shades of the same colour, drums the same, and so on. We’ve gone for green on guitars, blue on bass and red for drums as we couldn’t think of a colour beginning with ‘d’! Simply click on the colour of a channel or track to change it. 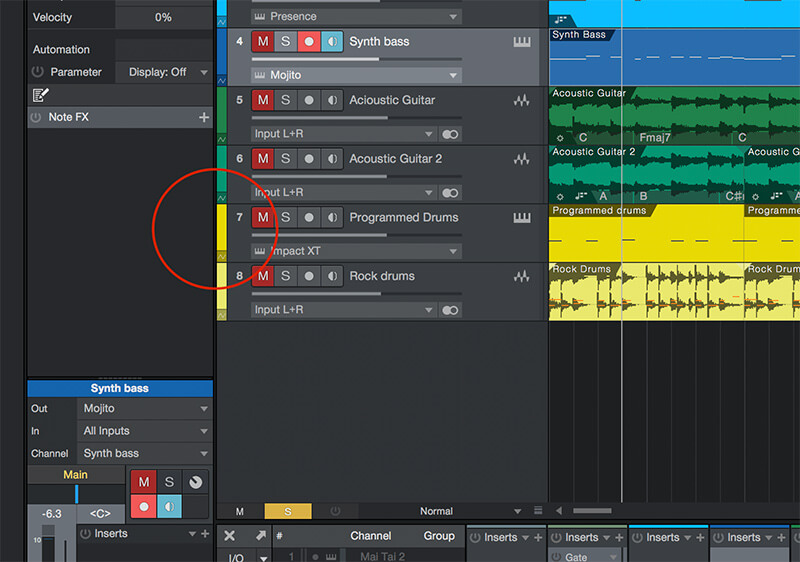 4. Colour coding can also be done without clicking in Studio One which is very cool. If you have a Mac ‘Magic’ mouse (or, we’re pretty sure, a PC mouse with a scroller) you can hover over the area shown, ‘scroll’ up or down and the colours will change without a click! 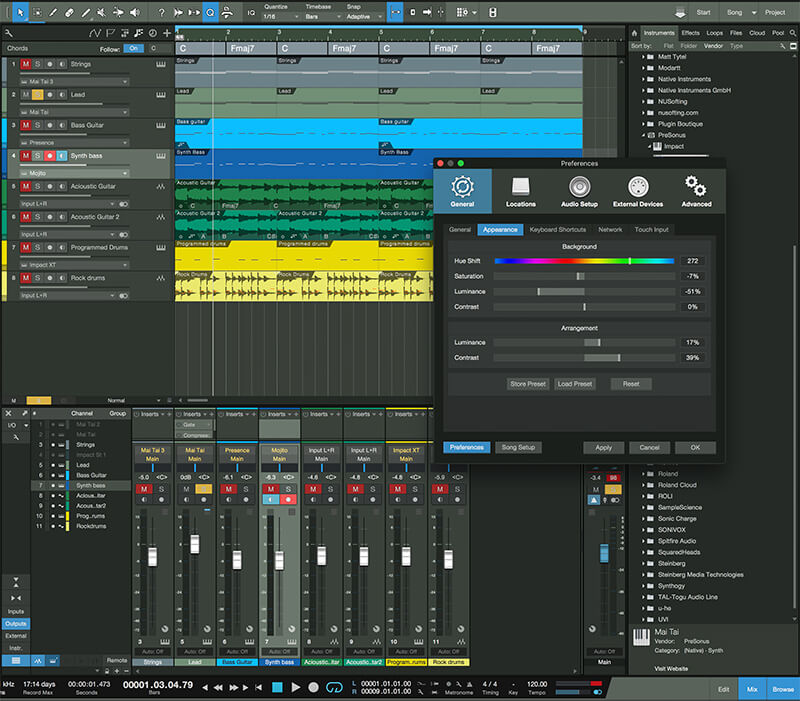 5 . While we have you on colours, perhaps now is the time to go into Studio One’s main preferences and change your entire colour scheme, or at least tighten up your Contrast and Luminance settings so you can actually see the divisions in your arrangement. 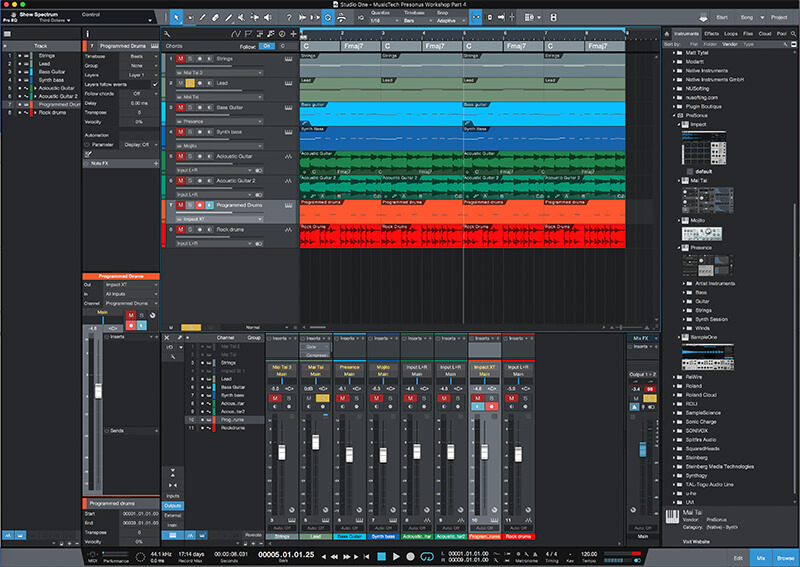 6. Well, that’s a lot more approachable isn’t it! Your drums are screaming red, everything is logically named and we’ve grouped tracks together by instrument type. You just want to get in there and arrange. Let’s do just that! 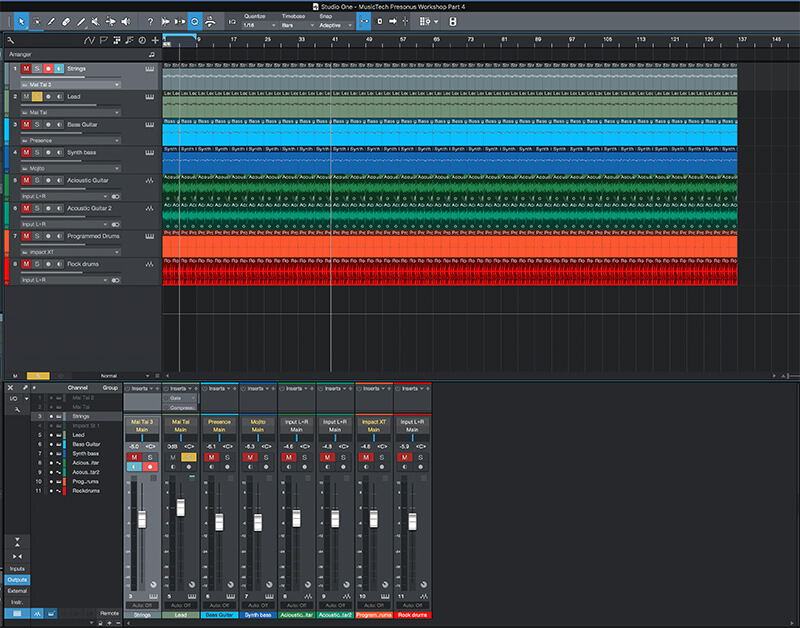 7. One of the easiest ways to create an arrangement quickly is to expand the looped area. Simply hit Option D to quickly duplicate your looped area as many times as you like. 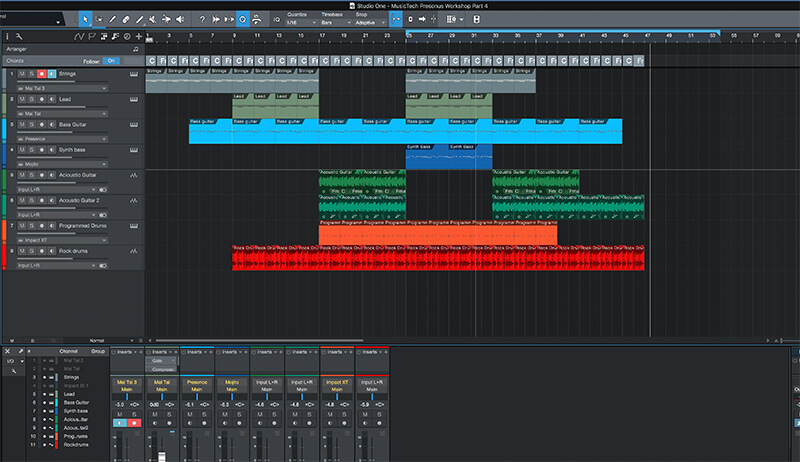 8.  From that we’ve created a very rough arrangement by deleting parts so that the song gradually comes in and out, and then created rough verses and choruses. It’s quite short at the moment but PreSonus Studio One has a great feature to make creating a song from this. 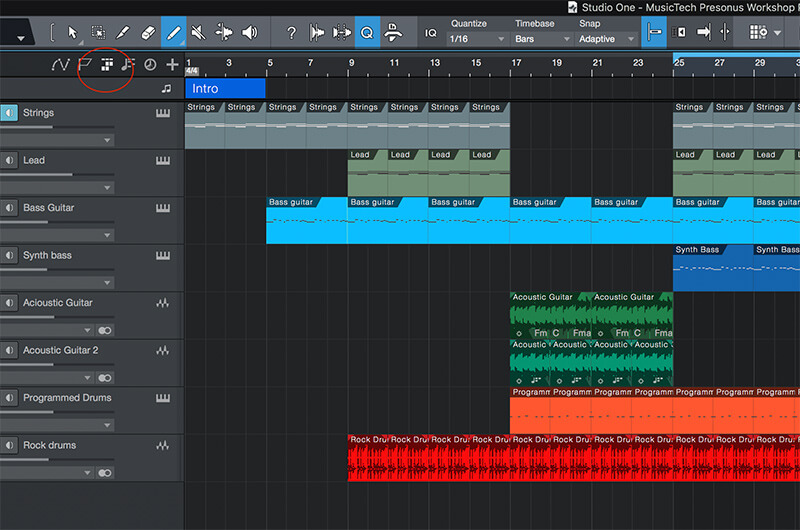 9. Click on the open Arranger Track icon – that’s the third one in as shown. This creates a track at the top of the screen. Select the pencil tool and draw from the start. You’ll see that it creates a section called ‘Intro’. 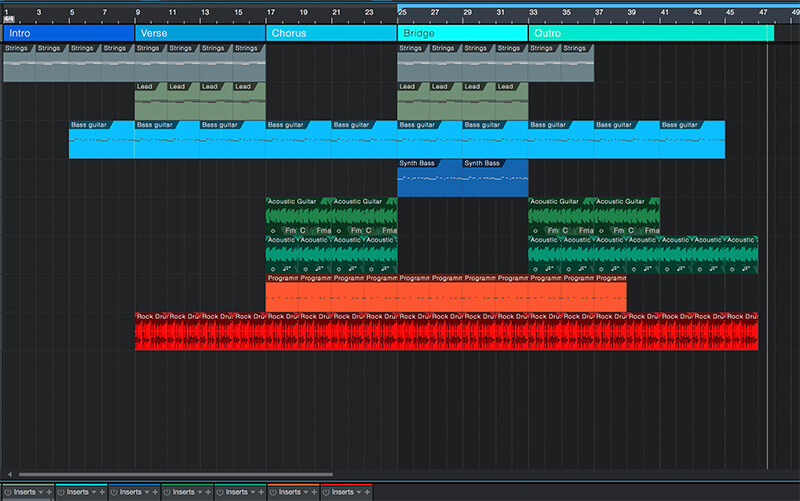 10. Keep doing this all along your rough song and you’ll then have sections for verse, chorus, bridge and outro. Don’t worry, you can rename these at any time. 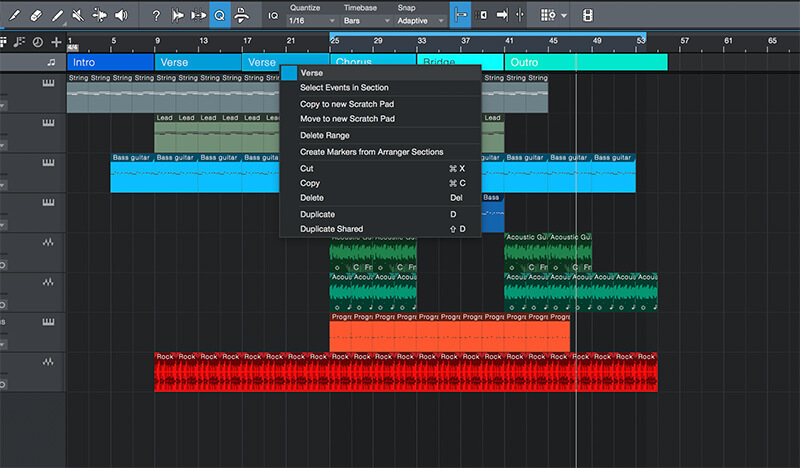 11. Control/right-clicking on any of these new song sections allows you to cut, copy, paste and duplicate them as much as you want. Want to extend the verse? Just double it! 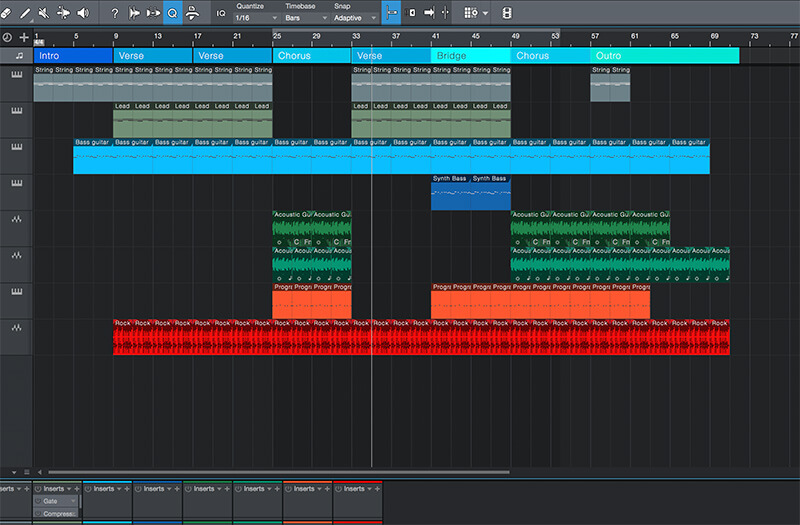 12. Then it’s simply a case of dragging and arranging each part as all the associated track move with each section as you move them around. Ten minutes later, you have a song on your hands. Next time around we’re going to mix it!

Check out the previous Studio One tutorials here