Up and coming UK artist Bamz joined Point Blank at their London school for a demonstration of creating a beat on the fly… A true rising star in the UK, Bamz has developed a style uniquely her own in just a few short years, making beats for singles by the MOBO winning artist Nadia Rose. […] 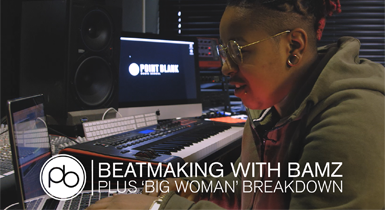 A true rising star in the UK, Bamz has developed a style uniquely her own in just a few short years, making beats for singles by the MOBO winning artist Nadia Rose. Always open and generous with her time, Bamz made this video with Point Blank Music School to demonstrate what she does when she’s in the studio.

As she reveals, Bamz is not classically trained, proving all you really need is a good ear and the drive to succeed. If you have these, but want to take your production to the next level, check out Point Blank’s production courses in London and Online.

Despite her laid-back demeanour, the first thing to note from this video is that once the 21-year-old South Londoner gets in front of a laptop she goes at it hard. It takes barely 10 minutes for the Station producer to make a beat, rattling through the basic elements she uses to lay down this skeleton of a track.

We learn that Logic Pro is her software of choice and that she’s a big fan of using strings and brass in Kontakt. Some tricks are revealed, such as her use of velocity for maximum effect, and how side-chaining gives her tracks the extra bounce and movement she looks for.

Bamz also talks through her production on the recent Nadia Rose hit Big Woman, which she built using sampled drums and percussion, and midi for the instrumentation. It’s very dynamic, taking a bashment framework and imbuing with a Latin freshness. As a self-described stickler for detail, she also reveals that she oversees the mixing process too.

Ever wanted to try your own hand at production? Or perhaps you’re looking to take your work to the next level? Point Blank can help you whatever your level. Beginners might like to try Intro to Music Production, while at the other end of the spectrum is the BA (Hons) in Music Production and Sound Engineering . They also offer courses online.