Watch a deconstruction of 808 State’s “Pacific 707” with Point Blank Music School’s lead course developer Ski Oakenfull… Last November, Point Blank teamed up with SARM Music Village for a day-long event featuring masterclasses and workshops from some of the best producers in the game, including by Trevor Horn, who himself deconstructed the classic track […] 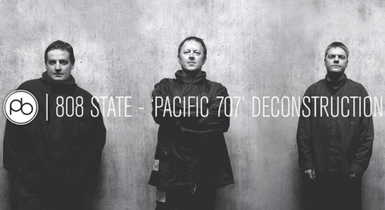 Last November, Point Blank teamed up with SARM Music Village for a day-long event featuring masterclasses and workshops from some of the best producers in the game, including by Trevor Horn, who himself deconstructed the classic track ‘Relax’ by Frankie Goes To Hollywood. Along with a Q&A with Horn, the day also saw Point Blank’s lead course developer Ski Oakenfull deconstruct 808 State’s Acid House classic “Pacific 707” which was released on ZTT.

‘Pacific 707’, and the original version ‘Pacific State’, identified by Graham Massey’s iconic saxophone lead, is one of the most revered tracks in dance music history which, in mainstream appeal, aped almost any other tune from the fabled Haçienda era. It was written by 808 State, which at the time was made up of Massey, Martin Price, and Gerald Simpson (better known as A Guy Called Gerald, himself the man behind ‘Voodoo Ray’, another track to rival ‘Pacific 707’ in seminality). A masterpiece of syncopation, nothing embodies the second summer of love in 1989 quite like “Pacific 707”.

In this deconstruction, Oakenfull uses Ableton Live to build each element of the track from scratch (time permitting). We learn what instruments were used, including the Roland TR-909, D-50, SH-101 and Juno-106, the Casio F2-1 and the Akai S-900, before he begins with the famously warm chords from the track’s intro. We learn that the track actually straddles two keys, that the famous ‘Loon Bird’ sample came from disc 22 of the E-Mu Emulator II library, and that Oakenfull finally learned how 808 State made the piano roll sound at the track’s beginning from Graham Massey himself. For more deconstructions like these, check out Point Blank’s YouTube Channel.

If you want access to weekly masterclasses and 1-2-1 tutorials, Point Blank offer all of that and more with their London BA (Hons) in Music Production and Sound Engineering, as well as an online alternative. If you’re after something shorter, take a look at their other London courses, or learn about their schools in Los Angeles, Ibiza and Mumbai. For more information or to talk to a course advisor, head to their contact page.