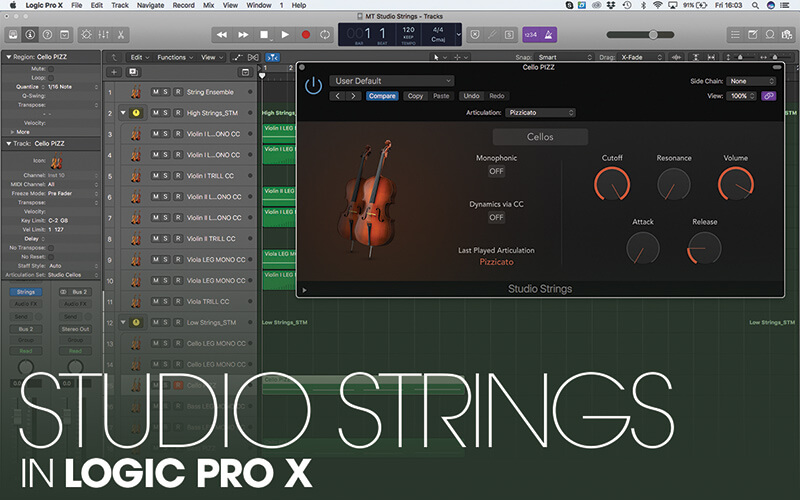 Studio Strings is designed to be easy-to-use, creating realistic sound string parts with the minimum of fuss, yet deep and flexible enough to keep pro users happy.

At its heart, Studio Strings is a sample-based virtual instrument dedicated to strings. What’s particularly interesting, though, is how you negotiate the sound of the string section – from different articulations, like pizzicato and legato, through to the various ensemble sizes and the individual instruments themselves. This all has an impact on your workflow, which we’ll be exploring in more detail in the workshop.

The uppermost level on Studio Strings is the instrument selection found towards the top of the interface. Here you can switch between the individual instruments – Violin 1, Violin 2, Viola, Cello and Double Bass – as well as the various ensembles patches – including String Ensembles, Small Section, Disco Strings and Singer Songwriter – that layer multiple instruments as part of a whole section.

Within each instrument selection you’ll also find a set of articulations (the precise set varying between the instruments) covering a range of different playing styles.

For those wanting simple string parts, Studio Strings can be an incredibly immediate instrument, with some unique features that aid its realism. The Ensemble patches, for example, are designed to give you an immediate section sound from just a single patch.

One of the most powerful features in that respect is Auto Voice split, which takes your combined string pad and intelligently arranges it between the discrete instruments of the string section (Violin, Viola etc) rather than a generic layered string sound. The result is greater distinction and character between the different voices, without the need to be an expert string arranger.

Switching between articulations is a big part of a realistic string arrangement, and key to extracting the full range of musical colours that strings can deliver. On a simple level, you can use the Articulation control at the top of the interface as a means of viewing and switching between the available articulations.

You can also move between the articulations using keyswitching, with the different assignments viewable from the Smart Controls area. If that wasn’t enough, you can also select individual notes from within Piano Roll editor and then assign them articulations from a drop-down menu.

One point worth considering is the differing approaches you might use when it comes to dynamics, particularly with respect to long and short articulations. For short articulations, it makes sense that the different dynamic samples are triggered from keyboard velocity, so that a higher velocity, for example, triggers a fortissimo sample.

For longer articulations, though, it’s often the case that the dynamic changes within the note (so that a note starts softly, for example, before a crescendo to fortissimo) which make the static nature of velocity control limiting. Instead, the Dynamics via CC option lets you control the dynamic using the mod wheel (or another assigned controller), adding an important level of expression to the part.

For the more ambitious string arranger, you might want to explore an option where you work with each discrete instrument – Violin I, Violin II, Viola, Cello and Double bass – rather than the ensemble patches.

When it comes to a more detailed instrument-by-instrument approach, therefore, it makes a lot of sense using Logic’s Track Stack feature, arguably using a Stack for the High Strings and Low Strings respectively.

Within each stack you can have a range of different instruments and articulations all on discrete tracks, as well as distinguishing between velocity and CC-based dynamic switching. Effects can then be applied on an instrument-by-instrument basis, or applied to the Low and High Strings as a group.

Having introduced the broad ideas, the walk-through details the specific steps you might take building a more realistic sounding string arrangement. Although we’ve made extensive use of Studio Strings, it’s worth pointing out that the same technique could also be applied to many Kontakt-based sample libraries, or indeed, a combination of the two.

At all points, though, it’s worth remembering to think like a string player, remembering that real strings aren’t ‘just a chord’ but instead, a collection of four or five distinct and separate voices that knit together to form a coherent sound. 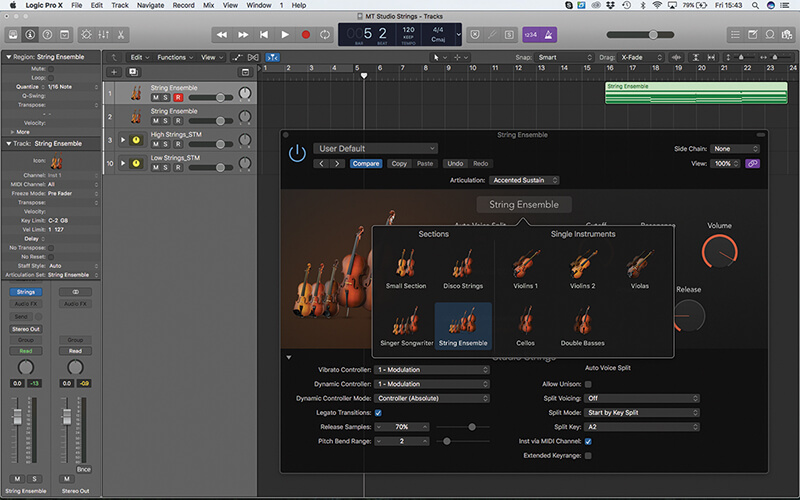 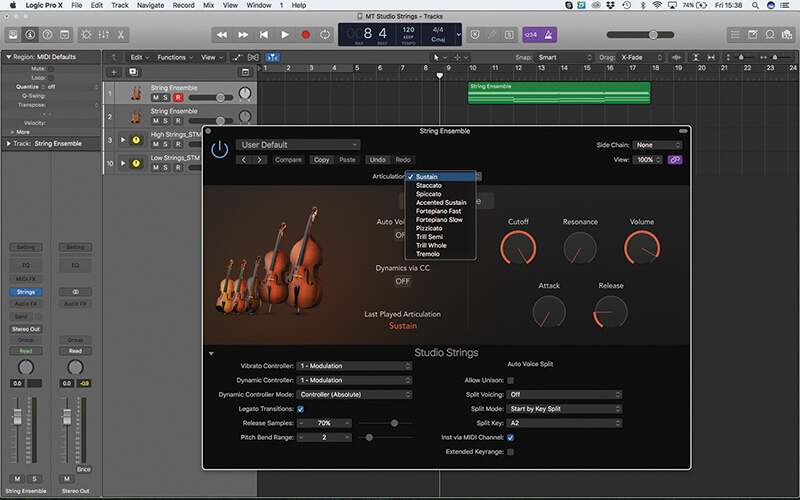 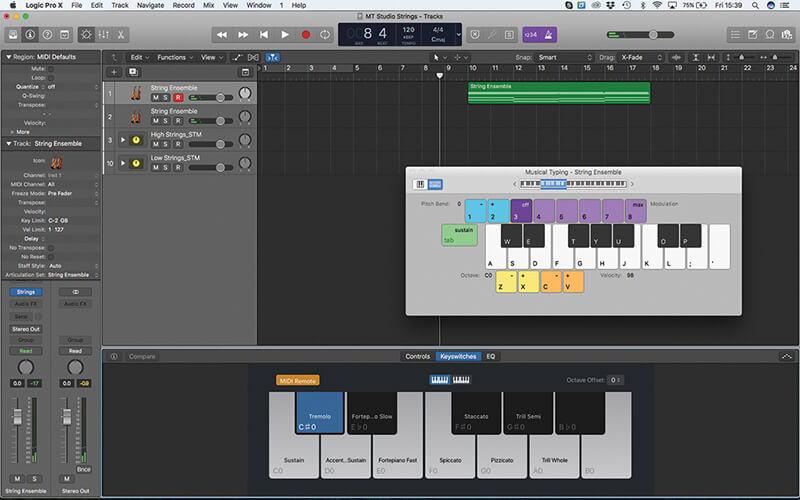 3. If you set the Articulation Set parameter in the Track Inspector to match your selected instrument, you can then make use of the Keyswitches display in the Smart Controls area, even switching articulations using an iPad. 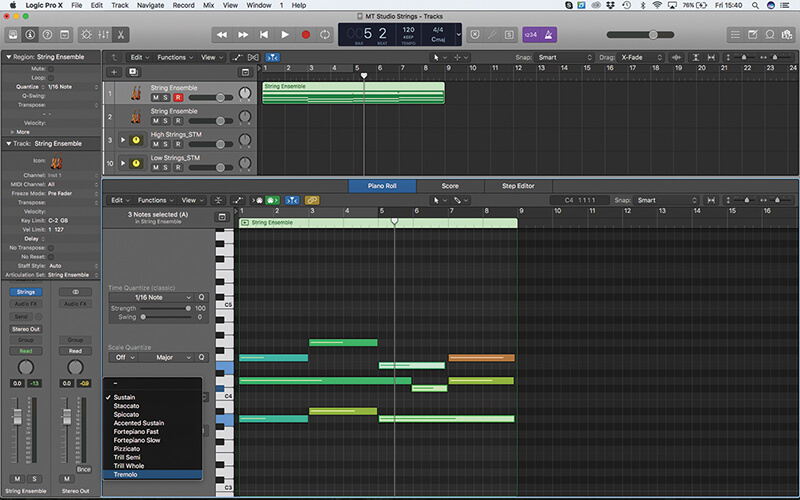 4. Assuming you’ve established the Articulation Set, you can also switch between articulations on a note-by-note basis using Piano Roll. Even in a complete performance, a single note could be assigned to tremolo, for example. 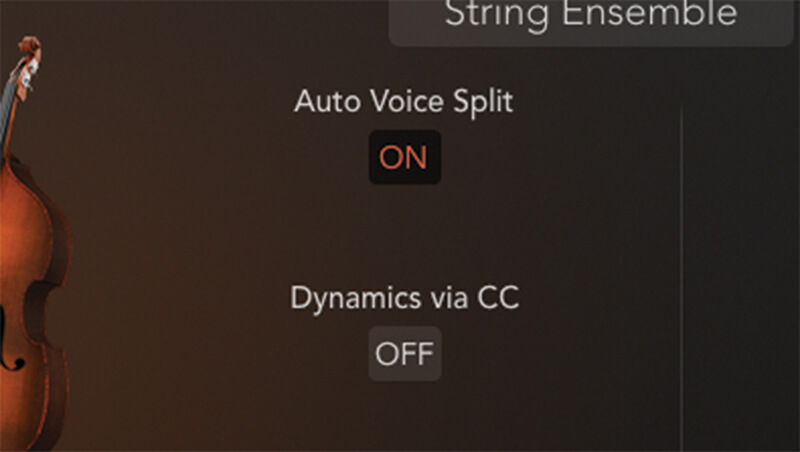 5. If you’re using an Ensemble patch, consider using the Auto Voice Split option, which divides played chords among the different string ‘voices’. The result is a less generic string sound, with a different character to each voice. 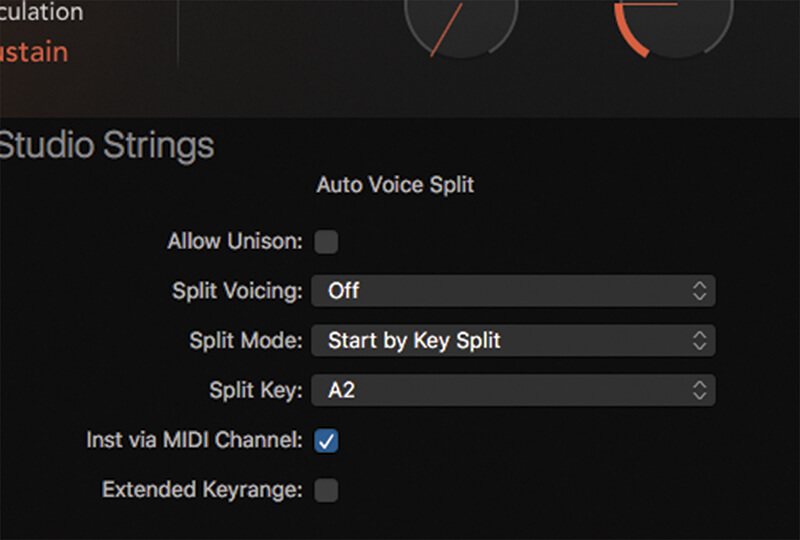 6. If you want to tailor the Auto Voice Split behaviour take a closer look at the extended parameters at the bottom of the interface. The Split Voicing contains some particularly interesting re-voicing options, like Drop 2+4. 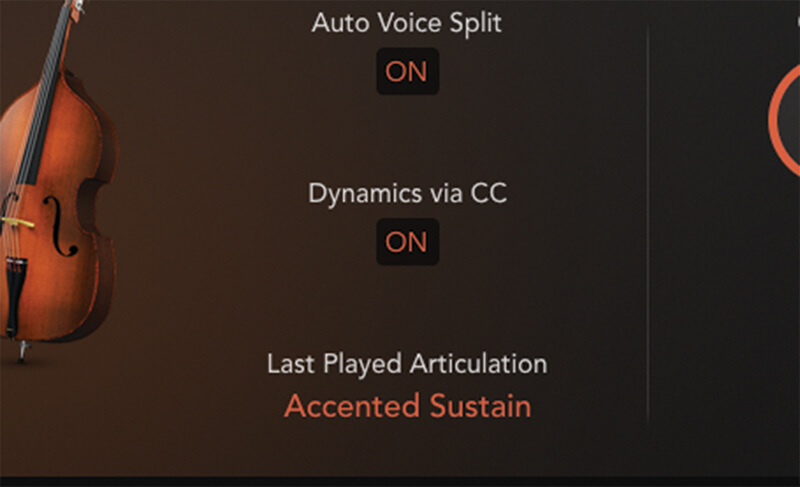 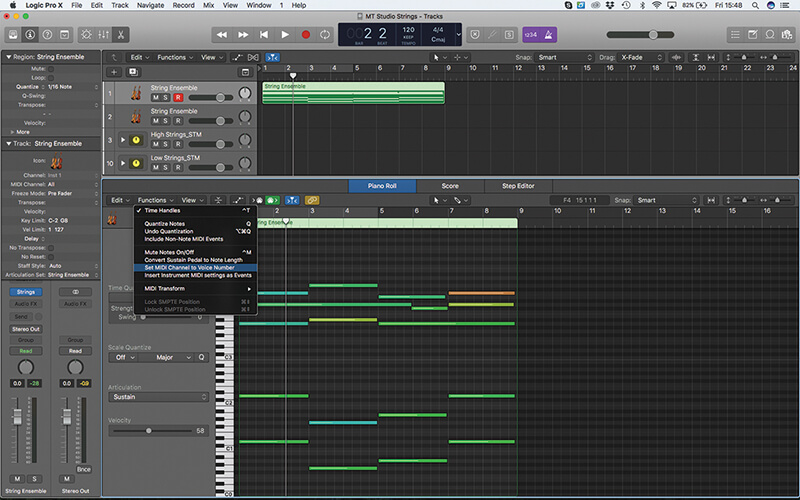 8. To have more control over the arrangement, consider manually re-voicing the part. We’ll start this by editing the MIDI region in the Piano Roll editor using the Functions > Set MIDI Channel to Voice Number feature. 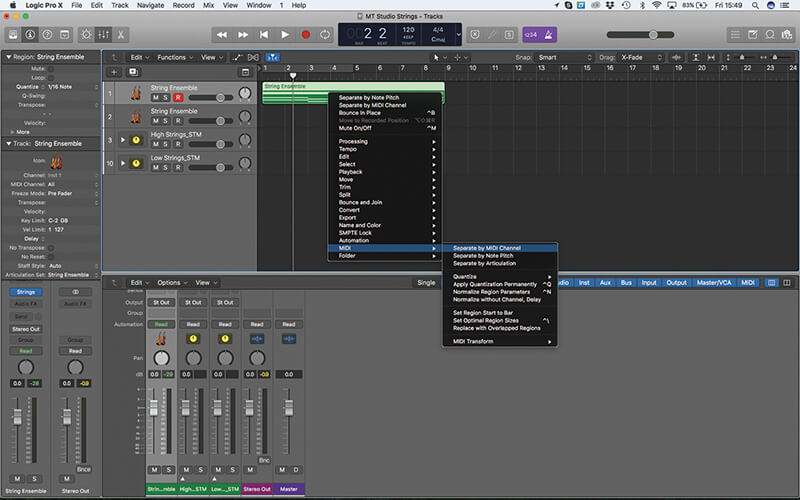 9. With the MIDI Channel to Voice Number applied, ctrl-click on the part and select MIDI > Separate by MIDI Channel from the contextual menu. Once applied, you’ll have a separate MIDI region for each voice. 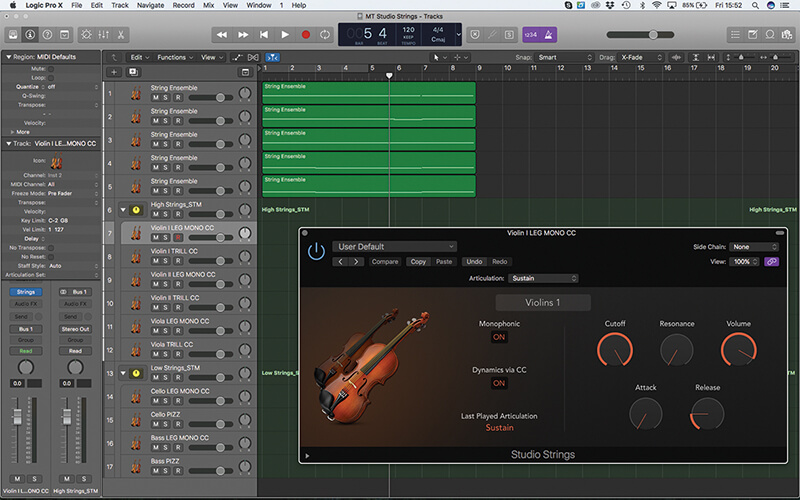 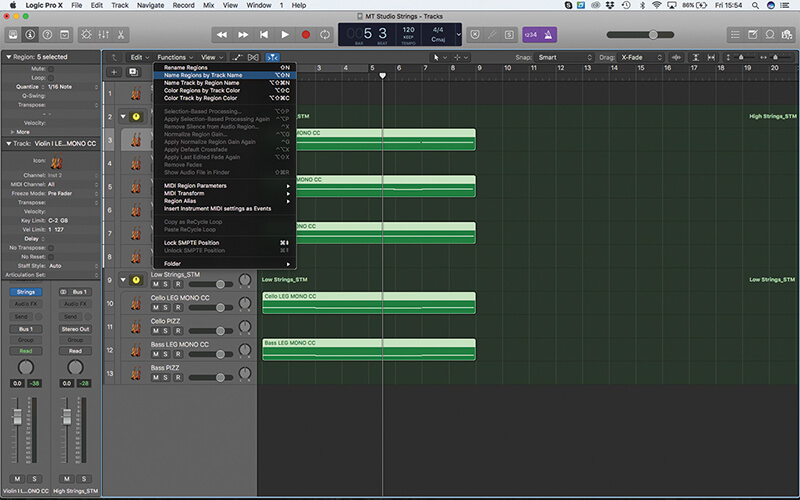 11. With the main region separated, move the regions to their appropriate instrument in the stack. Use the local menu item Function > Name Region by Track Name to re-label the regions according to their assignment. 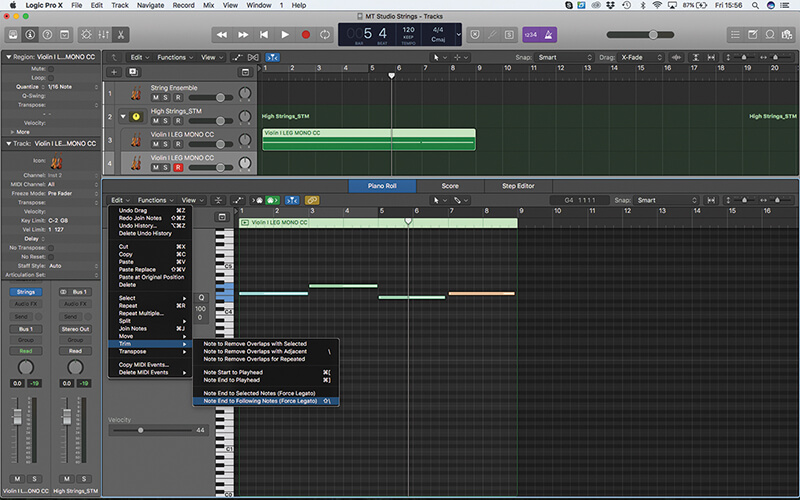 12. The key to realism is to think like a player. In this case, make sure the notes are played legato by highlighting all the notes and selecting Edit > Trim > Note End to Following Notes.

Attack and release 2 Softening the attack while increasing the Release is great on pad-like sounds, especially as by default, the samples have a relatively abrupt ending given the dry acoustic they’ve been recorded in. Rolling of the Cutoff can help a string sit behind the track. 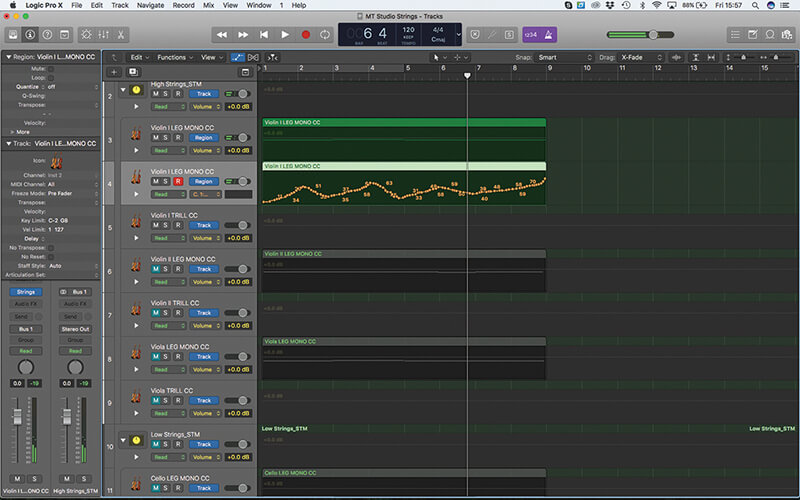 13. Concentrating on a single part, try recording modulation wheel info to give the part some form of dynamic shape. Record on an adjacent track lane so that you keep the modulation movement separate from the note data. 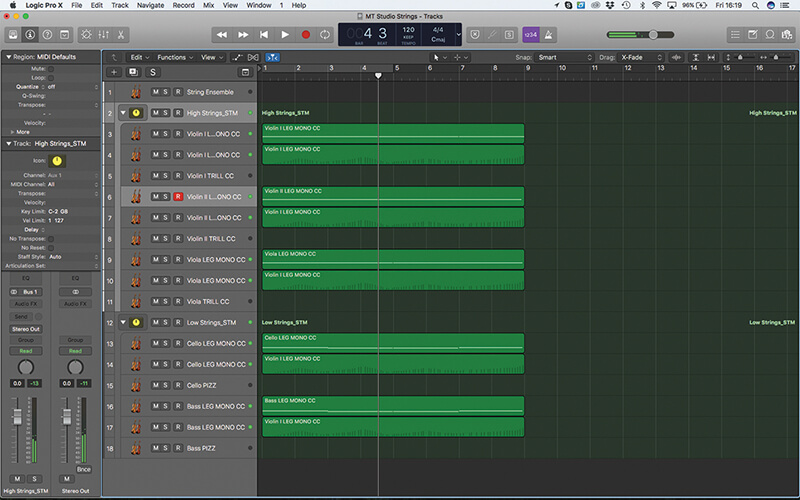 14. Once you’ve recorded one set of movements, you can duplicate the region across the other instruments in the ensemble. Now all the instruments should follow the same dynamic movements as the first Violin. 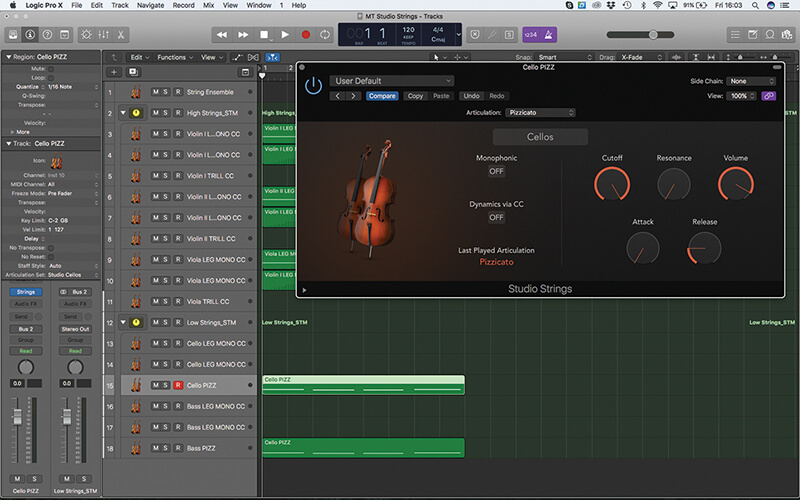 15. Having separate track lanes for short articulations means you can distinguish between MIDI CC messages and Velocity being used for dynamic movement. You can also clearly see how a part is being played. 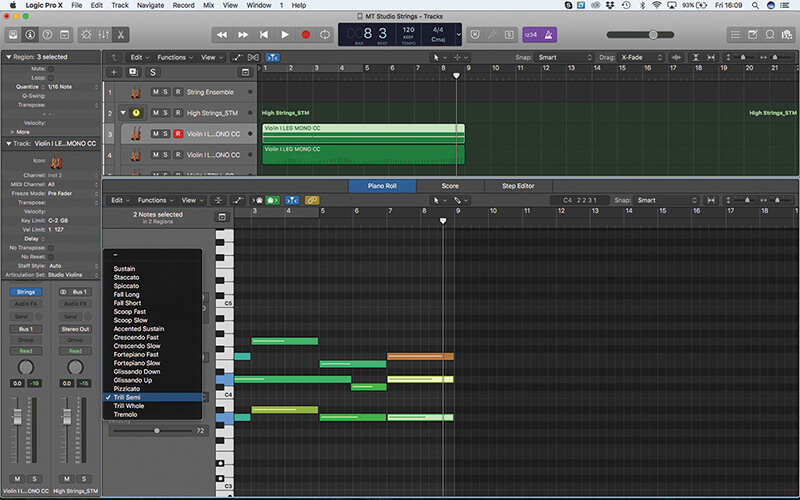 16. For longer articulations – like trills or tremolo – it makes sense to move between them using the piano roll editor. In this example we’ve smoothly moved to trills at the end of the phrase to add tension. 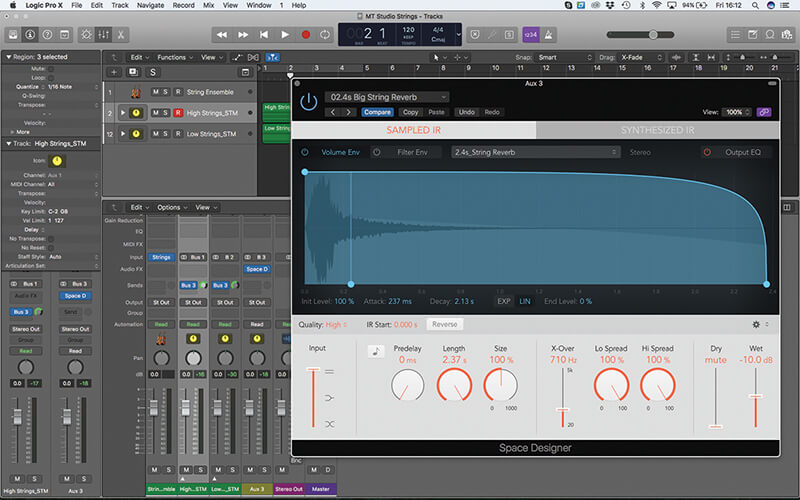 17. The Track Stack master faders are a useful point to apply effects, in this case adding reverb to the high and low strings. The Studio Strings samples are quite dry, so some extra ambiance makes sense. 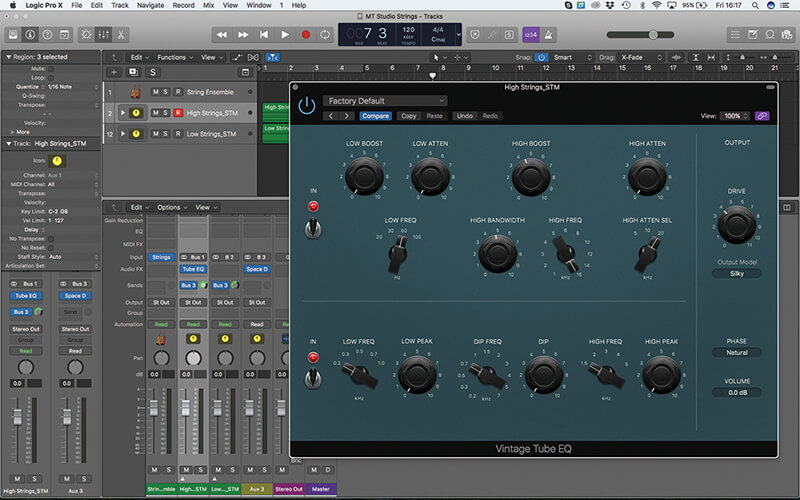 18. Compression and EQ are also good across the stack faders. My favourite string sweetener is the Vintage Tube EQ applying a ‘silky’ High Boost around 16kH.

Check out our other Logic tutorials here