Logic Tutorial: Getting The Best From Kicks & Bass

Getting your track thumping in the club is easier said than done when you’ve got a big kick and sub heavy bassline fighting for attention. Alex Holmes shows how to get the best out of both… In the past, creating a bassline for a house music track was a relatively simple affair; you start with […] 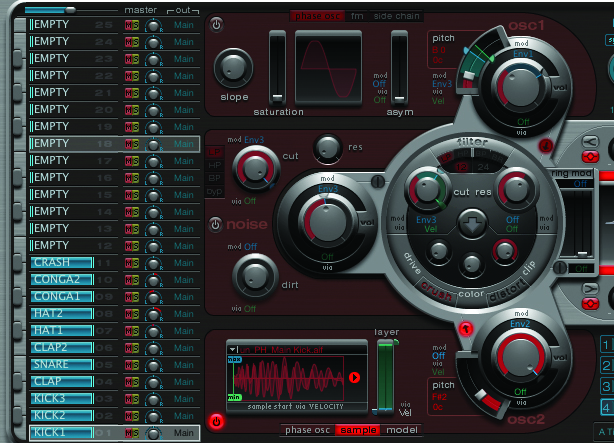 Getting your track thumping in the club is easier said than done when you’ve got a big kick and sub heavy bassline fighting for attention. Alex Holmes shows how to get the best out of both…

In the past, creating a bassline for a house music track was a relatively simple affair; you start with a pounding, sub-heavy kick, and layer in a higher bass sound to work around it while attempting to avoid overlapping frequencies.

However, in recent years, house music has merged somewhat with the big bass sounds of garage and jungle, creating something of a dilemma for the b-line loving house producer. Clubbers now ask a lot more of the low-end of a track, expecting both a thundering kick to pound their insides and a trouser shaking, sub-heavy bassline to shake their behinds to.

The question is: how does one go about squeezing both into the limited frequency space available?

The answer is, of course: with difficulty! However, with a balance of very careful sequencing, EQ cuts, envelope shaping and sidechaining, it can be done.

One of the most important choices you’ll make is what kick drum sound to use. Most of us have built up a fairly extensive collection of kicks over time, either through those bundled with your DAW, or through extra sample packs.

In fact, something as simple as choosing a kick drum can be an incredibly daunting task when you’re presented with hundreds (or even thousands) of options.

It’s also possible, and highly recommended, that you revisit your choice once you’ve built up the rest of your track and added in the other instruments, as a heavy, dull and thuddy kick might work really well with the bass when solo’d, but could get lost once you add the rest of your drum and instrument elements on top.

You can either try working out what’s lacking in the kick sound and layer in a higher or lower element, or try auditioning kicks to find something more appropriate. 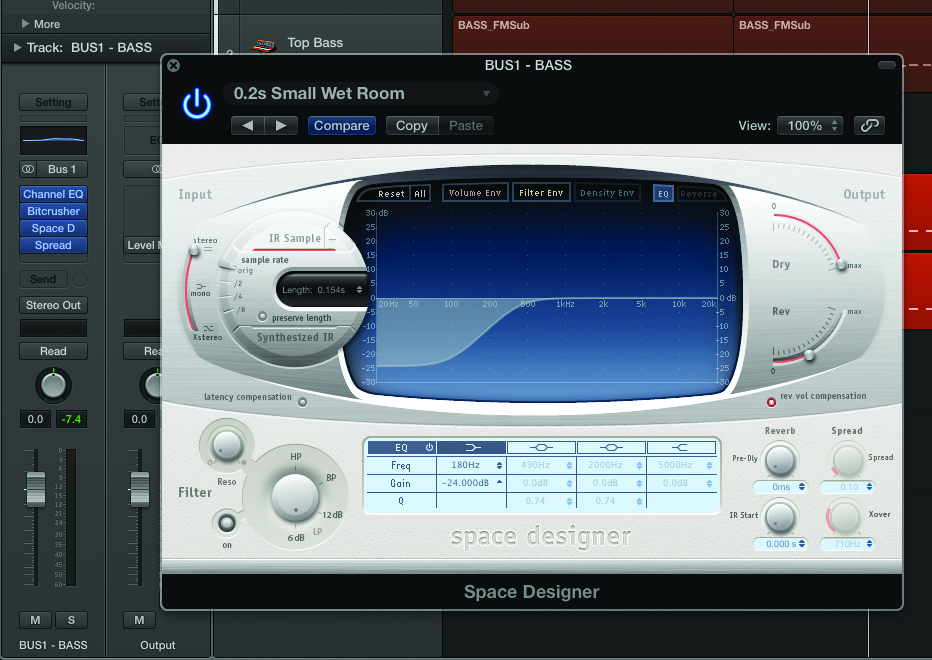 Don’t be afraid to do this once you’re quite far into a track, especially if you’re struggling with a final mix down. Simply changing the kick can magically fix some problematic clashes. You might consider investing in a kick drum specific software instruments such as Sonic Academy’s KICK (£24.95), or Plugin Boutique’s BigKick (£39.95), which will allow you to refine the finer details of the sound without having to pick a new one from scratch.

Smack my Pitch Up
Two other big considerations are the placement of notes and the pitch of the kick itself. One of the easiest ways to avoid issues is to place the bass notes away from the 4/4 kick pattern, but this will limit your options somewhat.

Once you’ve worked out the tonic of the bass pattern, you could try tuning your kick a 5th or 7th up (or down) so that it’s still harmonically in tune, but so the main weight of each isn’t on top of each other. However, in practice, although this can sometimes work, it can also lead to clashes if your bassline moves up and down a lot.

One way around this is to find a big, fat kick sound that has a wide frequency spread and no discernible pitch. For example, if you’re struggling to layer a booming 808 kick with a sub bass, try switching it to a 909 kick, as this has more of a thud sound than a pitched boom.

Most of the issues that you’ll encounter when trying to get your kick and bass working together will come from clashing frequencies below 100Hz. We often work with a separate sub bass sound to our main, characterful top bass, as this allows you to fine tune the relationship between the kick and sub and also means that you can apply sidechaining techniques to the low and high bass elements.

As Logic’s Multiband compressor lacks a sidechain input and is looking a little long in the tooth these days, you might consider some extra tools to help you achieve transparent separation.

Our current favourites are Fab Filter’s Pro-MB dynamic EQ (£129) that lets you focus the sidechain input signal on to a specific band, and Waves Factory’s Track Spacer 2 (€59), which allows you to feed your kick signal directly into the plug-in so that only the frequencies that are present are ducked from the bass.

To help things gel, you could also feed both the kick and the bass signals to a buss where they can be treated as a single entity. This will probably be the back bone of the entire track, so if you can get these two elements sounding solid, then the rest of the mix should be relatively easy 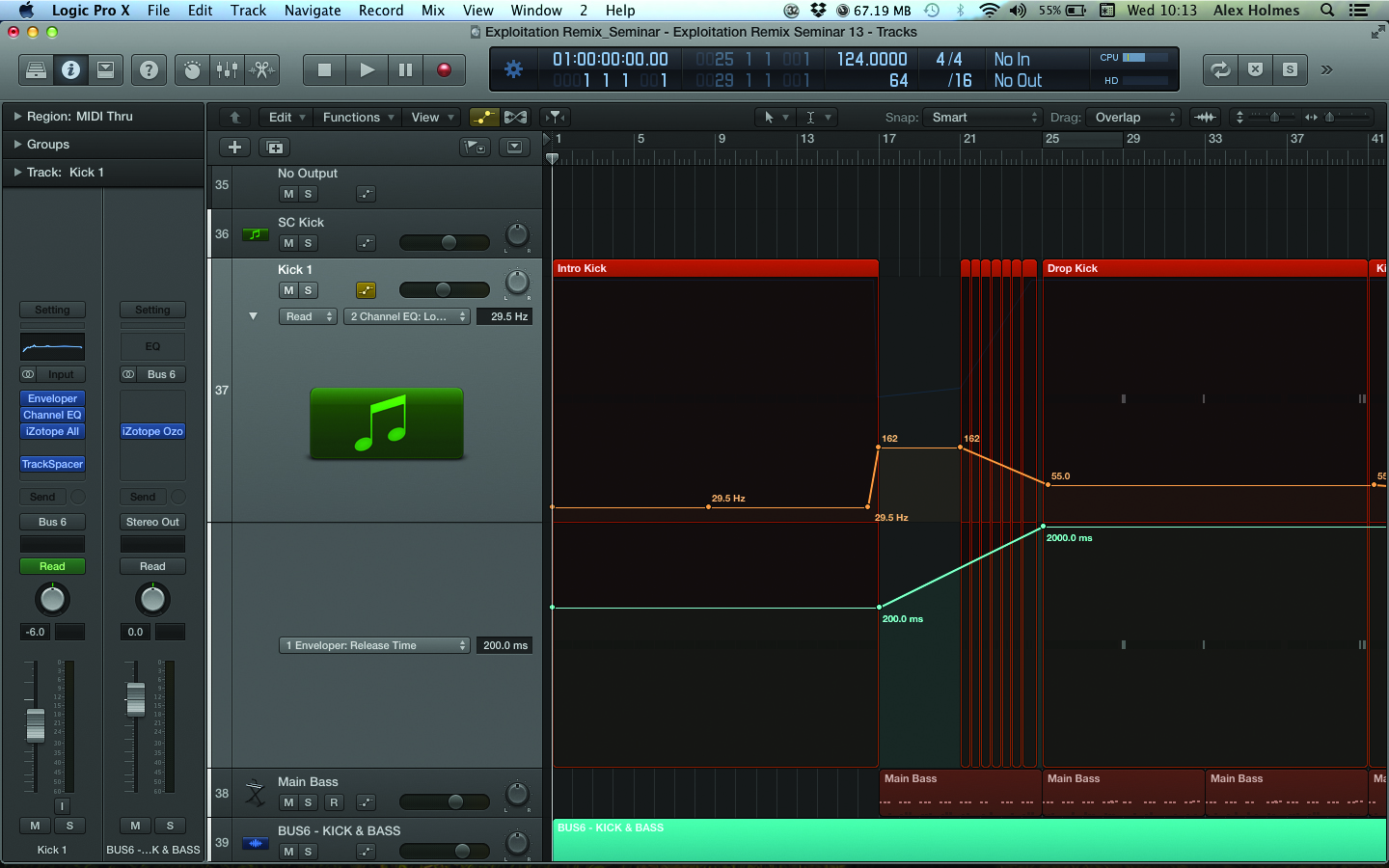 Don’t be afraid to use different kicks in different sections of your track. The intro to a track will be a solid chunk of 4/4 kicks that can easily be mixed in with another tune. However, when your weighty bassline drops alongside the kick later in the track, you might find that you’re better off reining in the kick to sit better with the bass.

Either through automation, or duplicating the kick track and making edits, you could experiment with EQ and the decay/release portion of the kick sound to create a tighter, more harmonious bottom end. You’ll probably have to make subtle sacrifices to both the kick and the bass, but ultimately your goal is to simply fill out the sub frequency portion of the track.