MIDI data doesn’t always have to edited in the Piano Roll. Using MIDI Plug-ins can seriously speed-up your workflow, as well as increasing your creative possibilities! 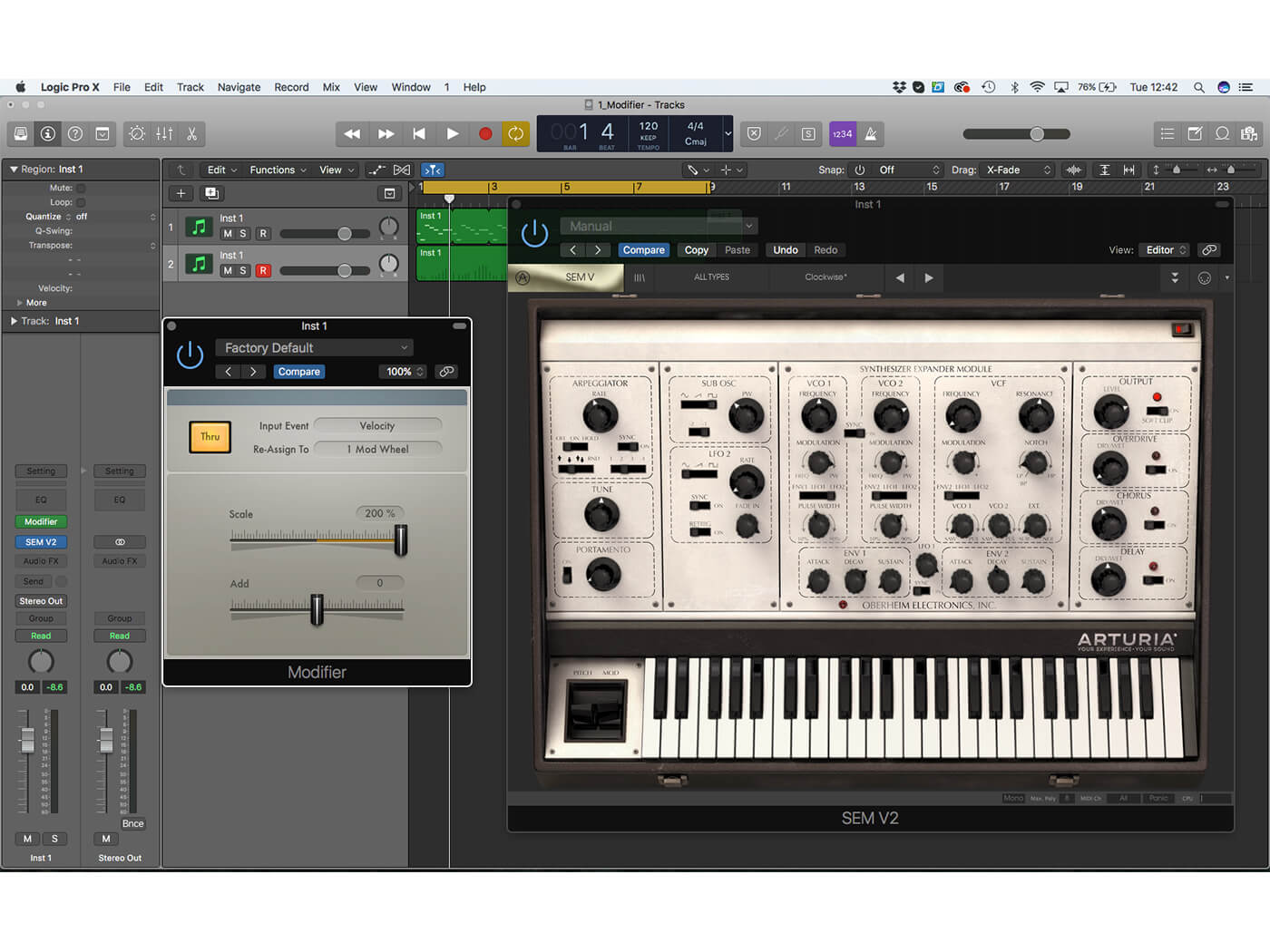 The difference between editing and processing data is easy to understand when it comes to audio in a Logic project, but when it comes to MIDI regions, most users tend to see MIDI data as something they’d rather ‘edit’ than ‘process’. The existence of MIDI FX plug-ins, however, means that we can process a MIDI region in similar ways to that of an audio track – radically or subtly transforming the information contained within it.

As we’ll see, understanding the unique way MIDI FX plug-ins can fit in with your workflow can open up a wealth of creative potential, as well as speeding up your MIDI-based productions.

Before we dive into the specifics of MIDI FX plug-ins, it’s worth asking ourselves why we might use them over traditional MIDI editors like the Piano Roll editor. One clear benefit is that they process MIDI data in real-time – transforming data ‘on the fly’, rather using an editor and endless mouse clicks after the part has been recorded.

Another clear advantage is that they can perform tasks (especially in relation to the processing of velocity data) in a quick and flexible way – making a drum performance more dynamic, for example, or more compressed, all without having touched a single note!

This workshop highlights six different ways you can use MIDI FX plug-ins, with six accompanying project files to highlight each different application. They range from relatively simple modifications, through to complicated tasks involving scripting and the radical transformation of MIDI data.

Logic Pro X includes a total of nine MIDI FX plug-ins, but we’re going to focus on five of the most useful: Modifier, Modulator, Note Repeater, Velocity Process and Scripter. Easily the most innocuous but useful plug-in is the Modifier, which, as the name suggests, is a great way of swapping different types of MIDI data. One really useful task the Modifier helps with is the remapping of the Mod Wheel to other controller types, without having to edit any of the settings on your controller keyboard, or for that matter, reassign controller mappings in your virtual instruments.

Thinking more creatively, though, you can also explore more dynamic ways of moving MIDI data from one type to another. Note data, for example, could be remapped, so that it also doubles up as MIDI CC 74 messages (filter cutoff, in other words), which in turn controls the relative opening and closing of filter cutoff. High keyboard positions, therefore, mean a relatively open filter, while lower positions produce a more closed filter.

Rather than changing existing MIDI messages, the Modulator is designed as a means of creating MIDI data, particularly MIDI CC messages that can be used to control virtual instruments. The Modulator is particularly good for sidechain-compression-like effects, where a sound pulses in respect to principal beats. The main MIDI CC type to use in this situation is CC 7 (Volume), but you can also create interesting result using the aforementioned CC 74 to create similar pulsing effects applied to a synthesizer’s filter cutoff control.

Note Repeater works as a form of MIDI delay unit, creating one or more tempo-synced repeated notes. Note Repeater is a great MIDI plug-in to use when you’re programming rhythm lines, especially given its ability to turn a simple drum groove in a more complex, syncopated pattern.

The trick here is to use ‘dotted’ note settings and to ensure the Velocity Ramp setting is set so that the repeats are a quieter MIDI velocity, sounding more like how a drummer might play ghost notes. Things get even more creative when you factor in the ability to transpose the repeats, so that, in the case of MIDI drums, you’re actually triggering different parts of the kit.

Another great tool to use alongside programmed drums is the Velocity Processor, which is the MIDI equivalent to a compressor/expander. In the case of MIDI drums, the Velocity Processor isn’t just controlling amplitude (as with a compressor) but actively changing the dynamics of the performance. Apply a hard compression setting, therefore, and each beat will be hit proportionately louder, triggering more of the fortissimo samples. Likewise, you can also create interesting results using a lighter velocity compression but with less Make Up, so that the drums are proportionately more pianissimo.

The Scripter is where the scope becomes almost infinite, assuming you’re happy to code your own plug-in. For those that have got the time or inclination for coding, it’s worthwhile noting the range of excellent Scripter presets that could be plug-ins in their own right. The excellent Drum Kit Design Embellishments preset, for example, includes a variety of snare rolls, drags and flams that can be easily triggered from a MIDI keyboard rather than programmed from scratch.

Likewise, the Guitar Strummer preset turns a single note in a properly voiced guitar strum or arpeggio, which lends many of the EXS24’s guitar instruments a more realistic sound than when played (clumsily) on a keyboard.

To see the plug-ins in action, take a closer look at the six project files included on the DVD (which you can download here) It’s certainly a refreshing way to look at MIDI and what can be achieved with virtual instruments in Logic Pro X. 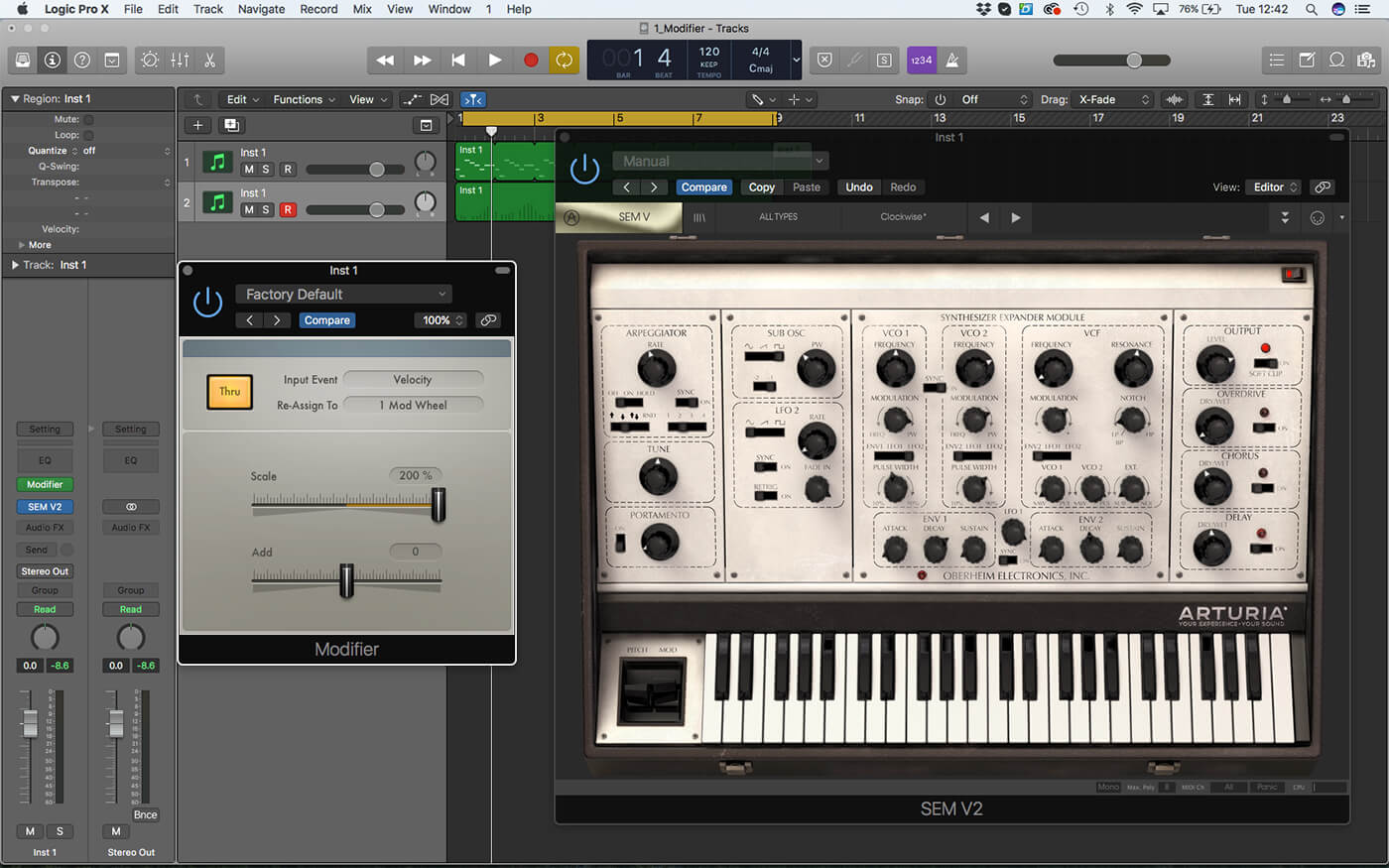 1. In this first example, we’re going to use the Modifier MIDI FX plug-in to quickly reassign the Mod Wheel to control the filter on a third-party synth – all in real-time and without the need to edit the patch. 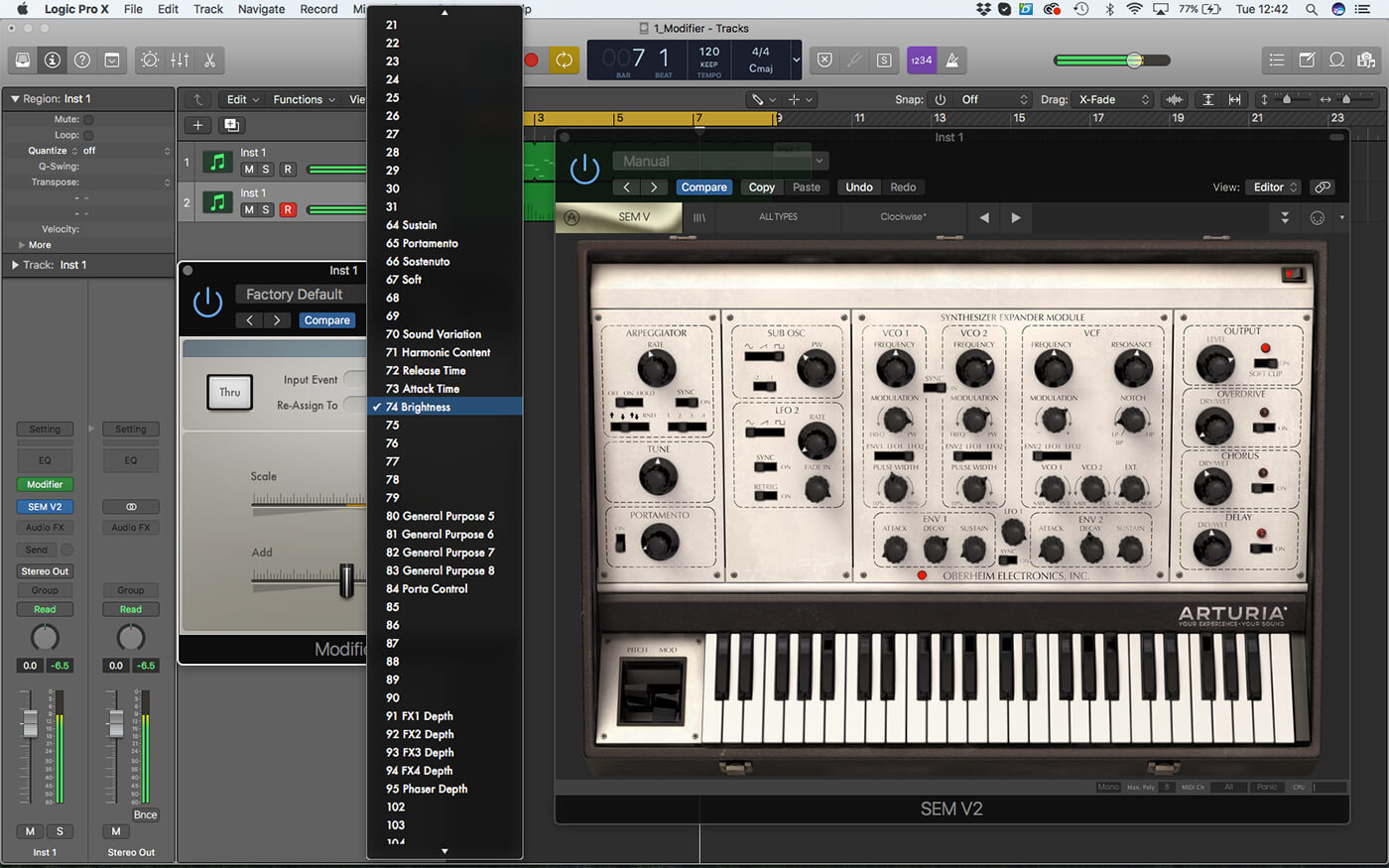 2. In the Modifier, change the Input Event to 1 Mod Wheel and the Re-Assign To parameter to 74 Brightness. Uncheck the Thru button so that the modulation wheel movements are removed from the data stream. 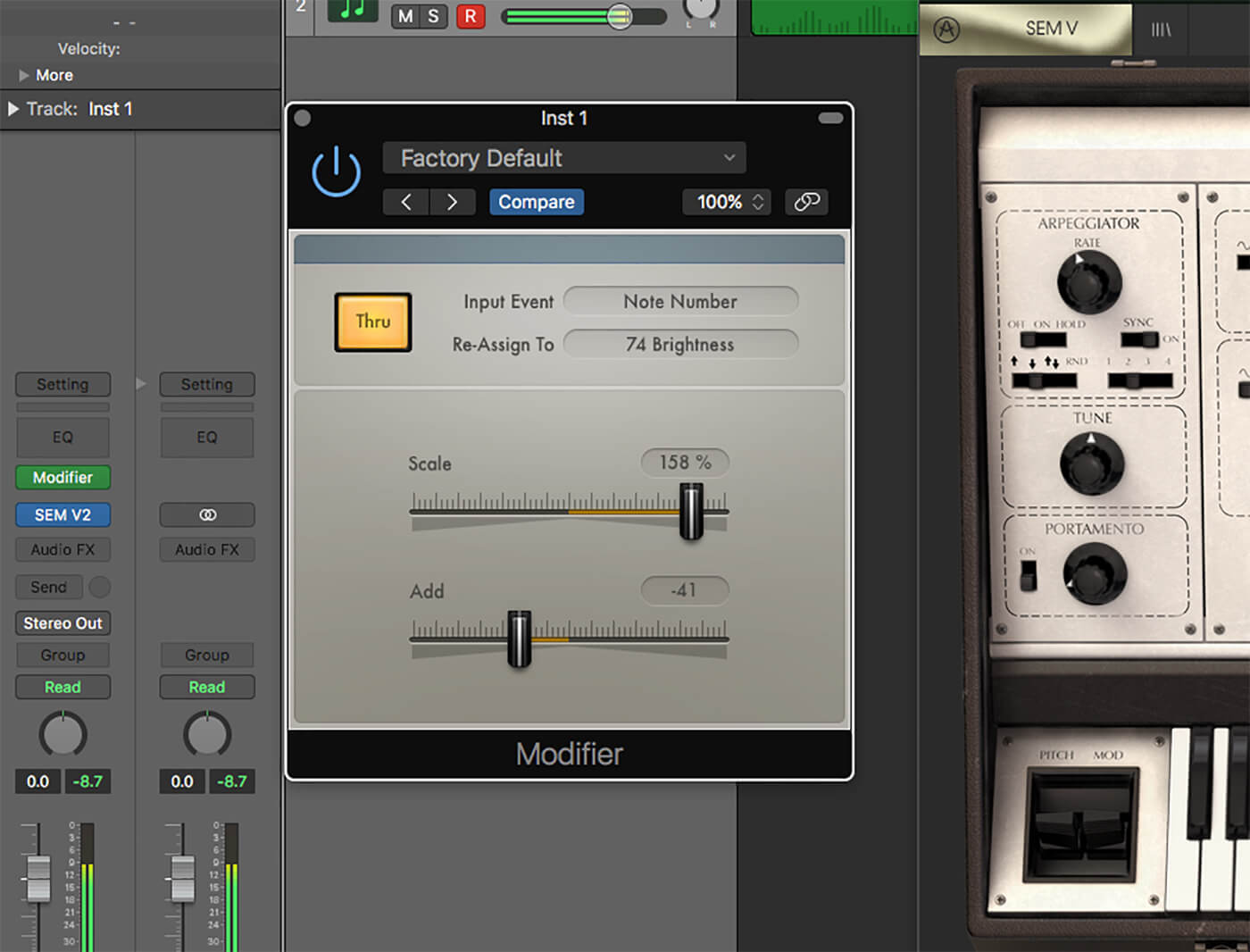 3. Here’s an alternative approach, this time using Note data to create MIDI CC 74 events. The result is similar to Keytrack on a filter, although remember to leave Thru on this time so that note data still passes through. 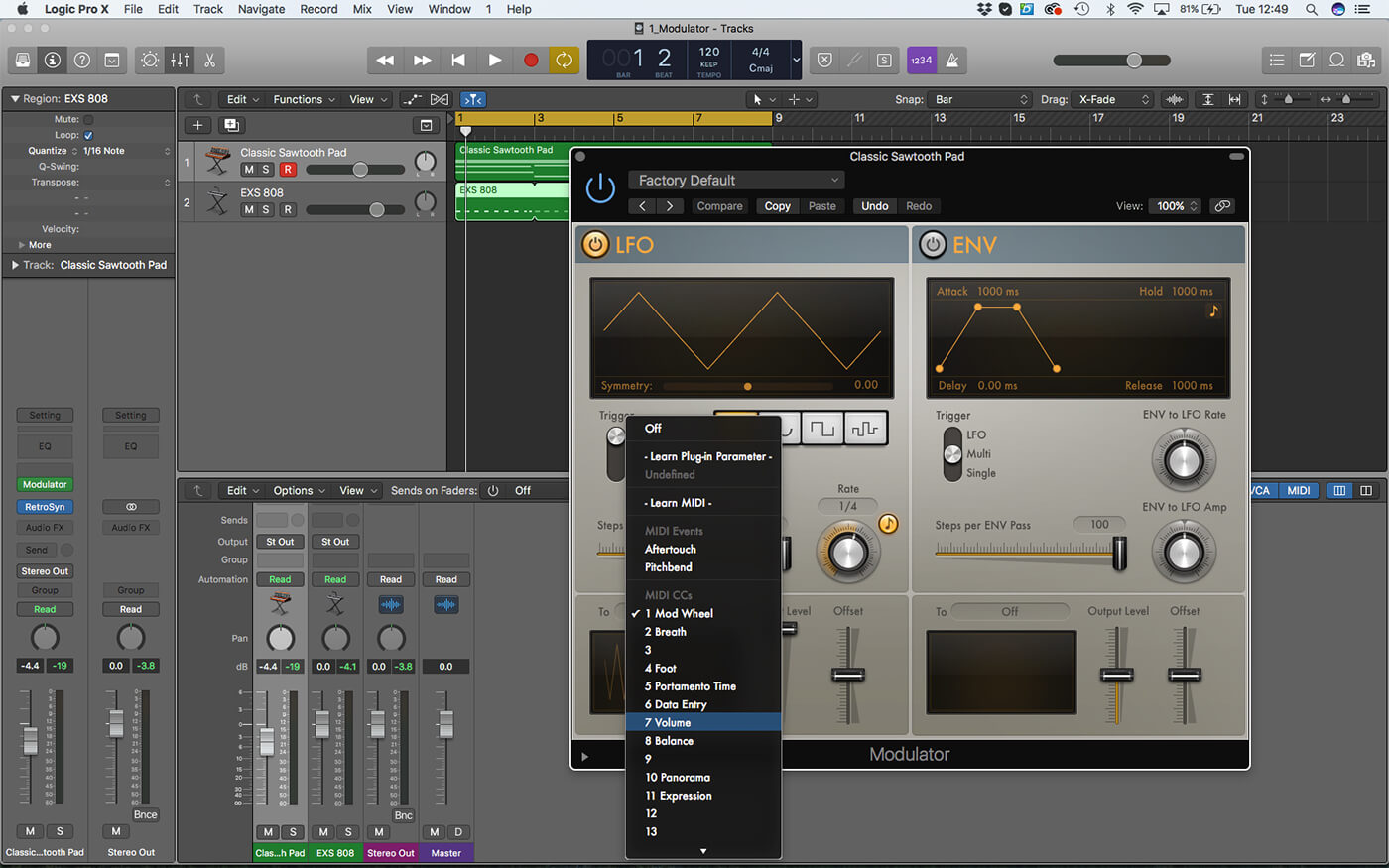 4. The Modulator plug-in is a great way of creating tempo-synced MIDI CC data from scratch. In this example, we’re using the LFO to create a ‘Side Chain’ pulse effect on a pad sound using MIDI CC 7. 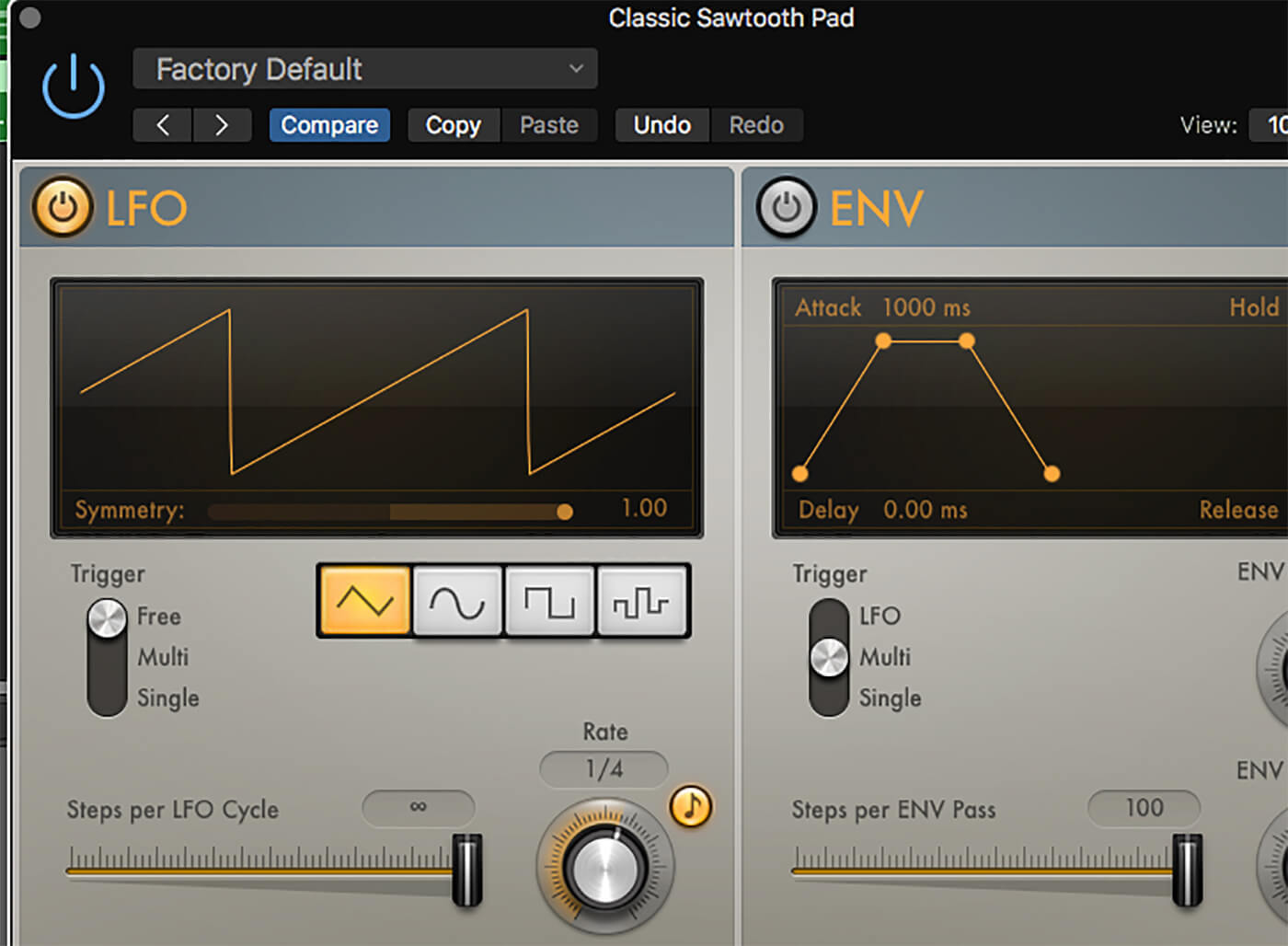 5. We’re using a triangle wave as our starting point, changing the symmetry of the waveshape so as to create an upwards ramp. The rate is set at 1/4 so that the attenuation occurs on each beat of the bar. 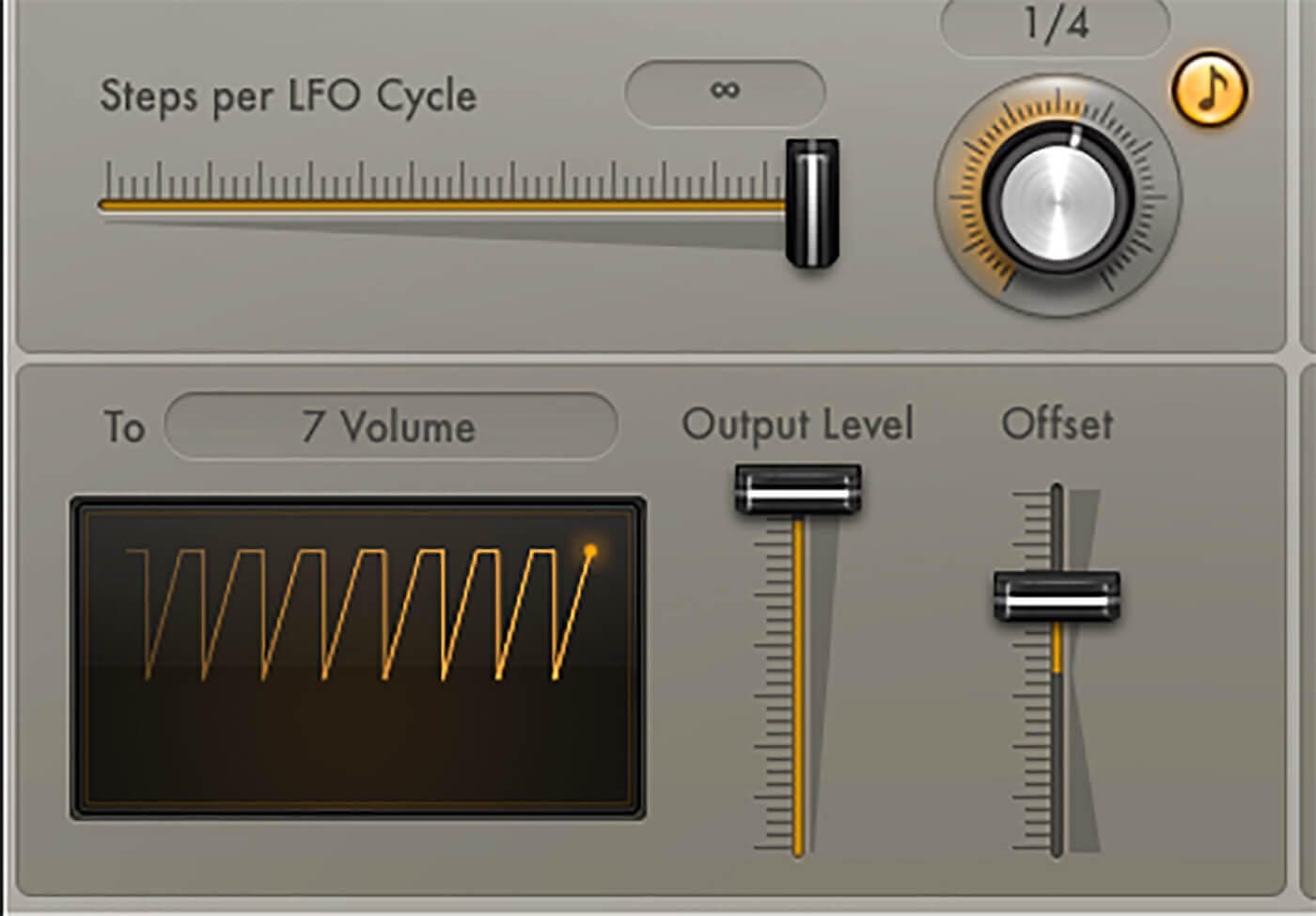 6. The finesse of the effect is in the amount of Offset you apply to the output. Raising the offset will lower the amount of attenuation. This will let more of the pad sound through and lessen the pulsing effect.

7. The Note Repeater plug-in is a great way of making basic rhythm tracks sound exciting, even with the simplest MIDI sequences. The use of dotted divisions (like 8d) creates interesting syncopated rhythm effects. 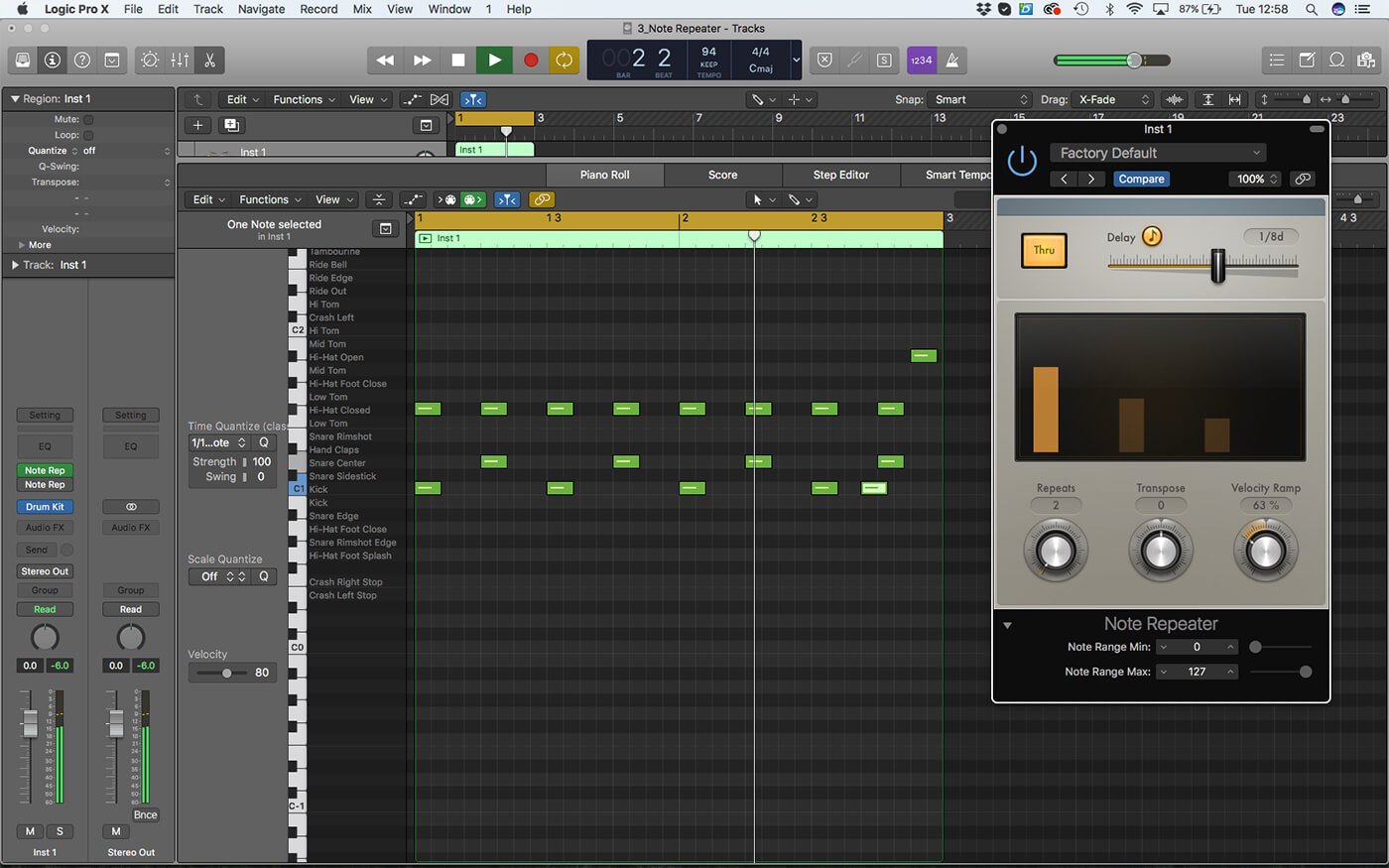 8. Use a small number of repeats (usually 1 or 2) and then adjust the Velocity ramp down to around 63%. The repeated notes now sound more like ‘ghost’ notes that a drummer might play between the main beats. 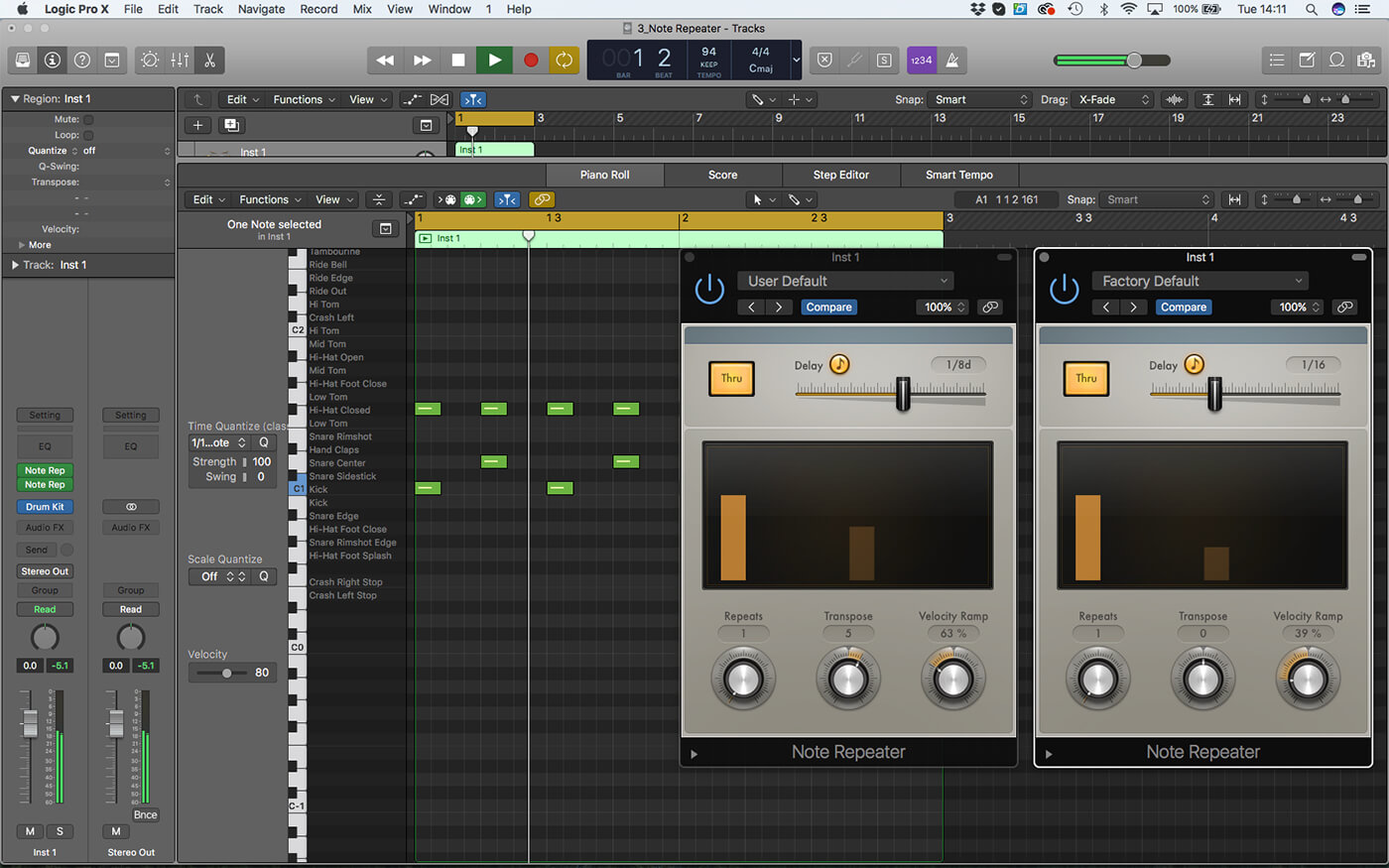 9. You can even go one stage further and create hybrid effects with two Note Repeater plug-in in series, each set to a different delay time. Use Transpose to have the echo played on a different part of the kit.

MIDI CC AND VIRTUAL INSTRUMENTS One key point to distinguish with MIDI CC messages is the different behavior of Logic’s own virtual synths to those of many third-party developers. Logic’s own instruments tend to not respond to incoming MIDI CC messages (although in many cases you can set this up as a modulation routing), whereas third-party virtual instruments have many principal parameters under MIDI CC control. 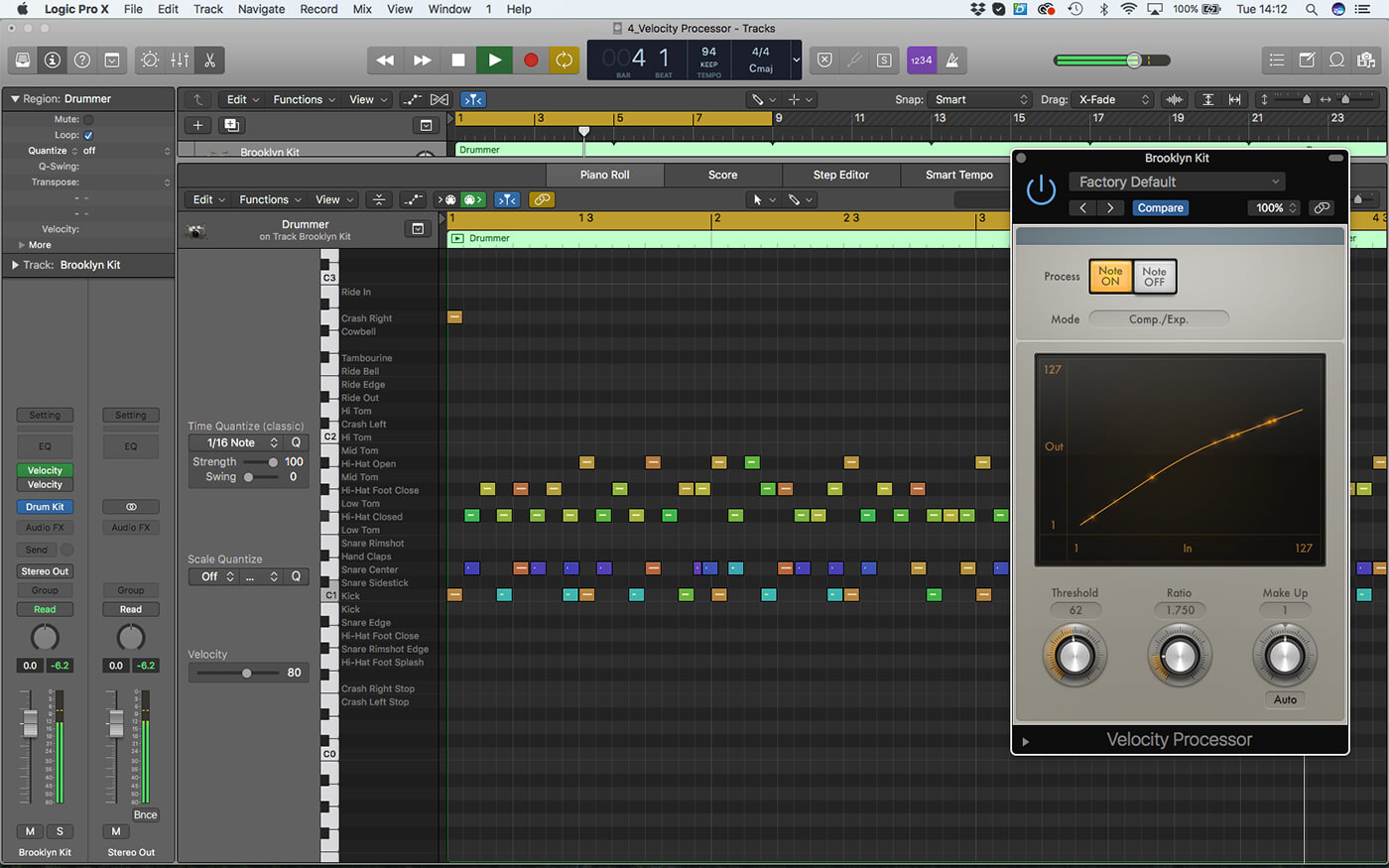 10. The Velocity Processor is a great way of controlling the dynamics, going above and beyond what a compressor can deliver. As you can see from this sequence, there’s a wealth of dynamics for the plug-in to work with.

11. This first setting uses a hard compression ratio (8.00) that really evens out the dynamic variation. With the added Make Up, the quitter MIDI notes become much more prominent and less ghost-like.

12. This second setting does something no compressor can – it restricts the dynamic range and reduces the overall played intensity. This is a great tool for quieter drum parts, where the ghost notes would otherwise become lost. 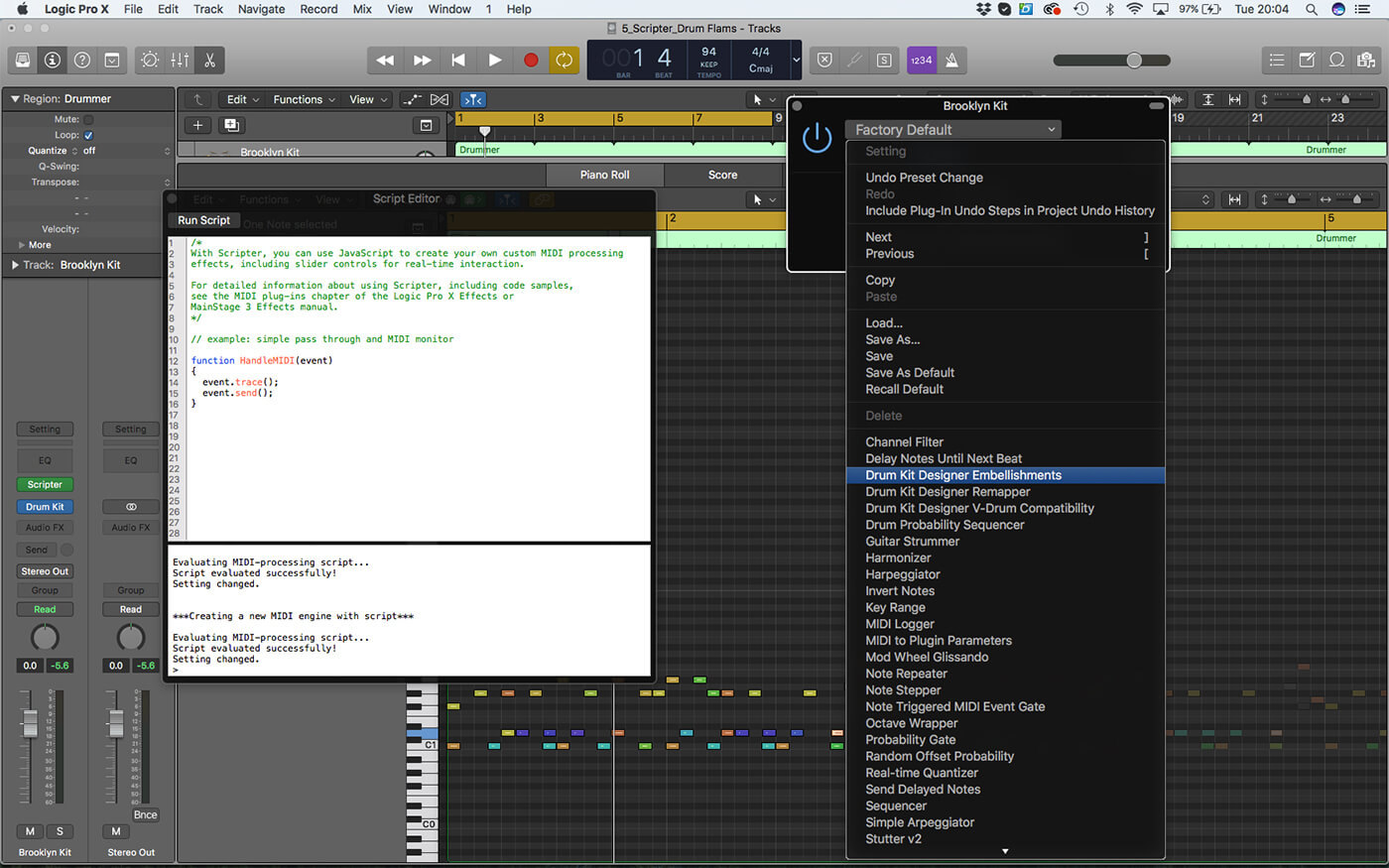 13. The Scripter might look daunting, but a wealth of musically useful presets means you don’t need to be a coding expert to use it. In this example, we’re going to use the Drum Kit Designer Embellishments. 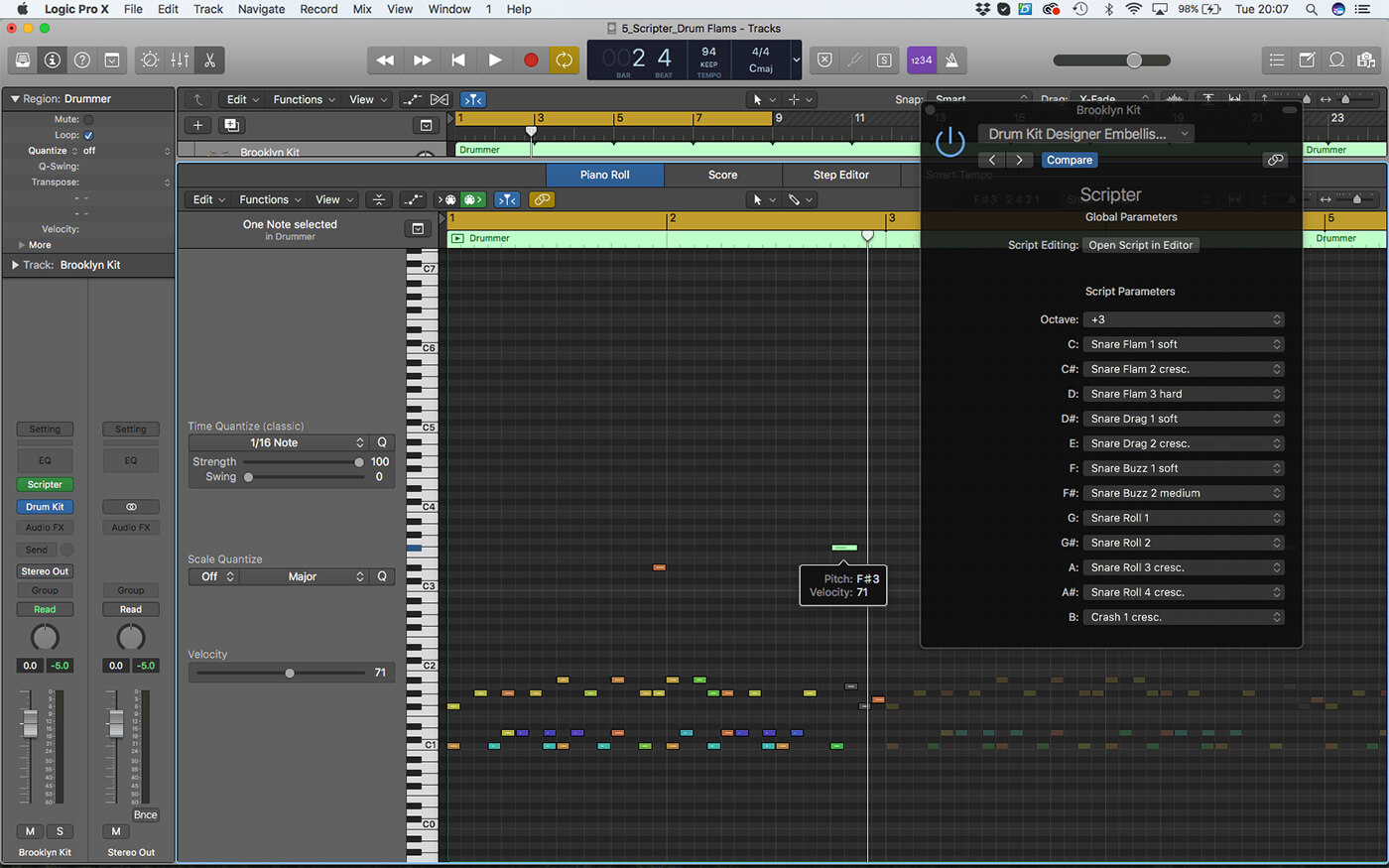 14. The ‘embellishments’ this script creates can be found above the standard Drum Kit Designer MIDI mapping, triggering mainly snare-based drags, flams and rolls that would time-consuming to program for scratch. 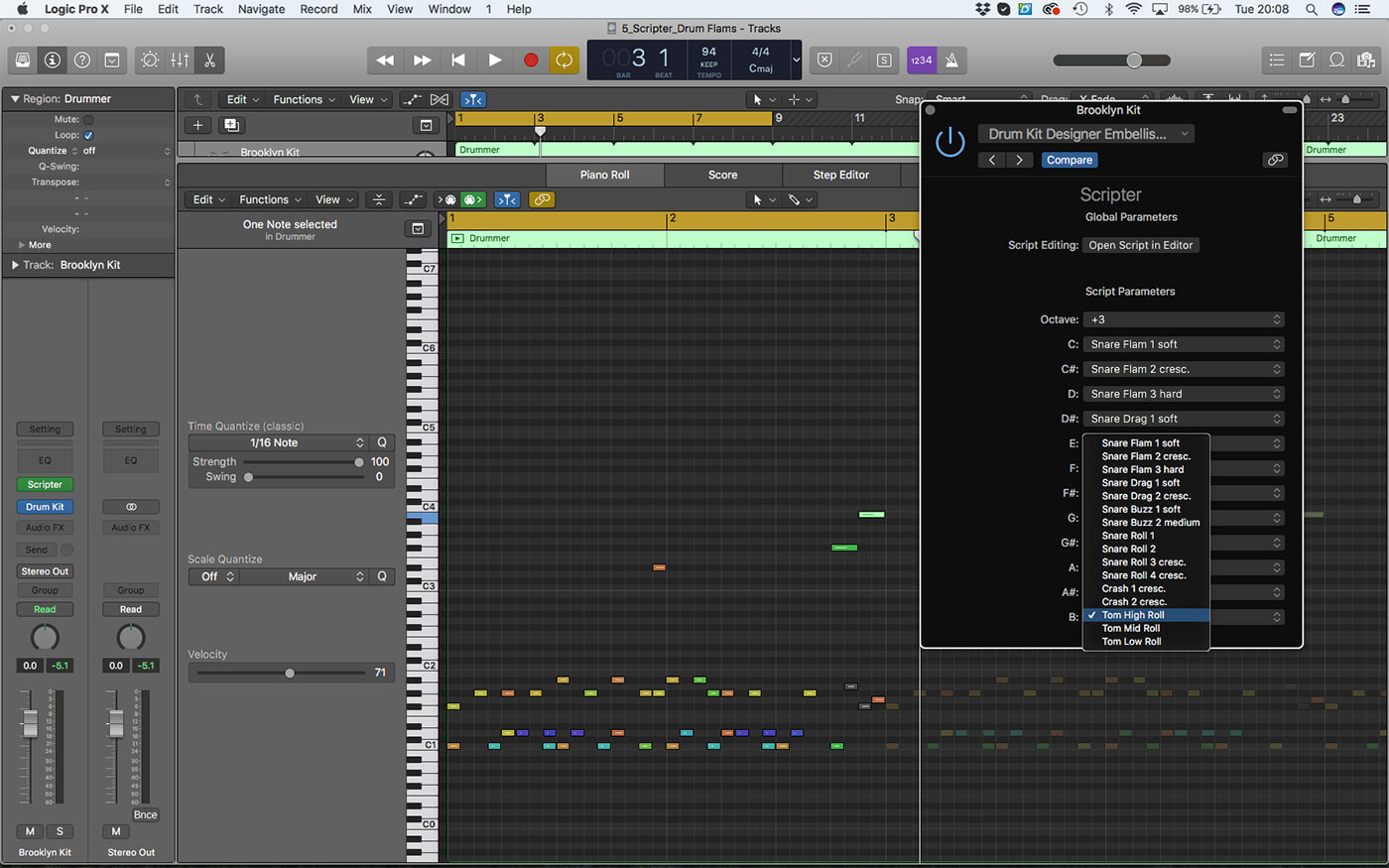 15. The finished sequence uses a short drag and buzz effect on the snare drum. You can assign custom embellishments using the drop-down menu, which also include options for tom rolls and cymbal crescendos. 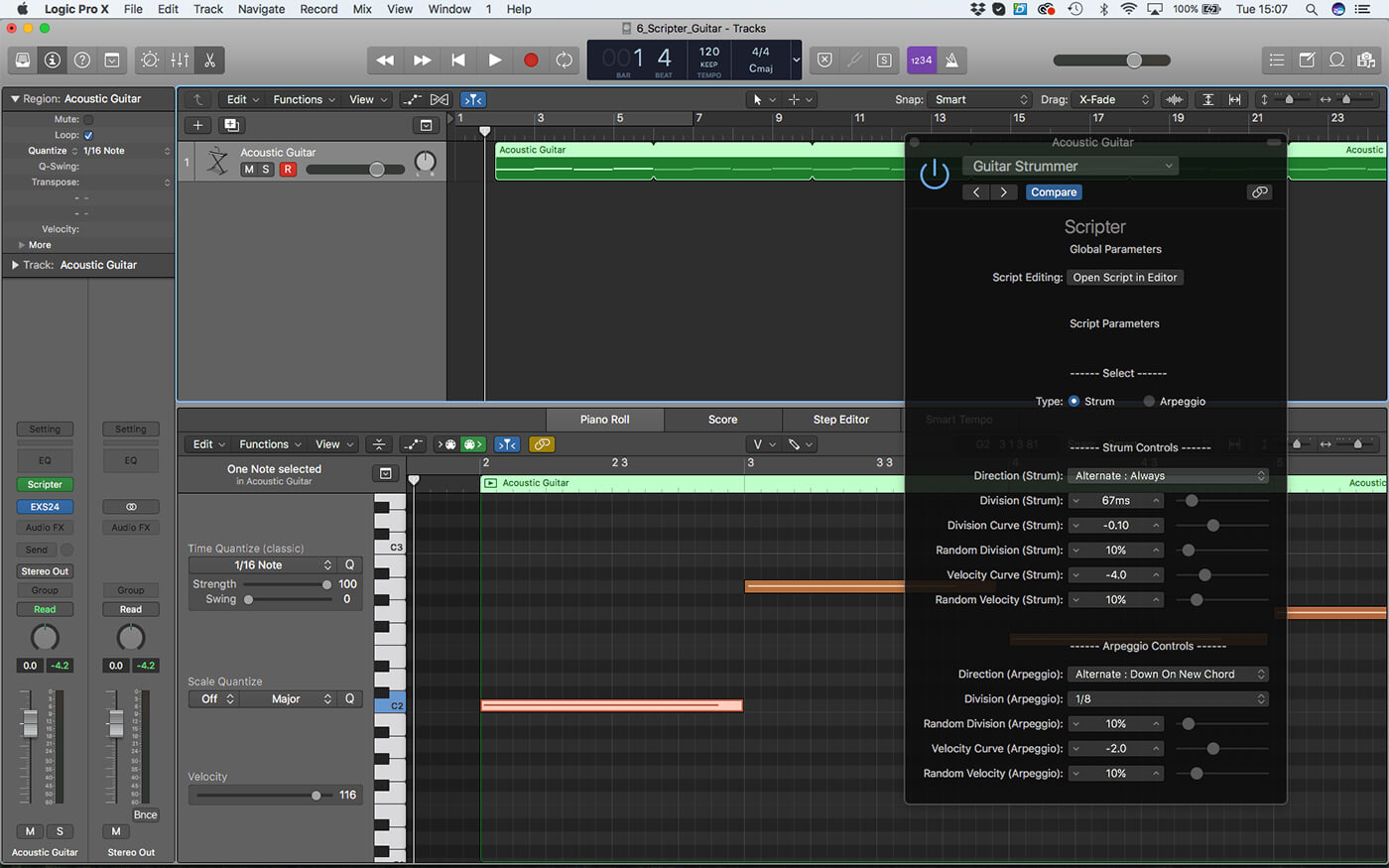 16. Another useful script is the Guitar Strummer, which can emulate both the voicing and strumming of guitar chords. Notes are triggered from single notes below B2, and you can move between Strum and Arpeggio mode. 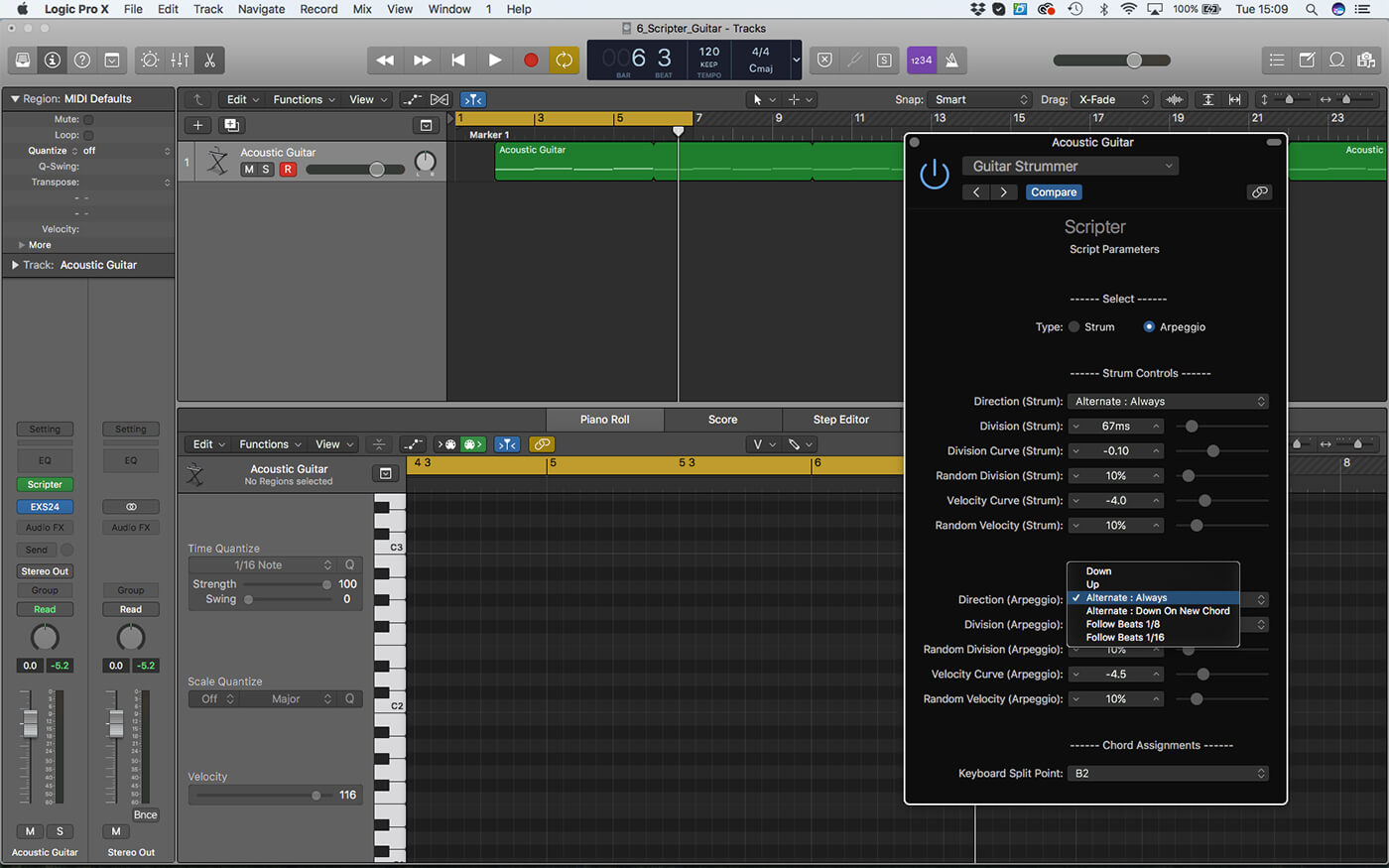 17. Both the Strum and Arpeggio modes can specify the direction of the performance. You can force the script in one direction (up or down), or use one of the Alternative modes so that it swaps the movement on each chord. 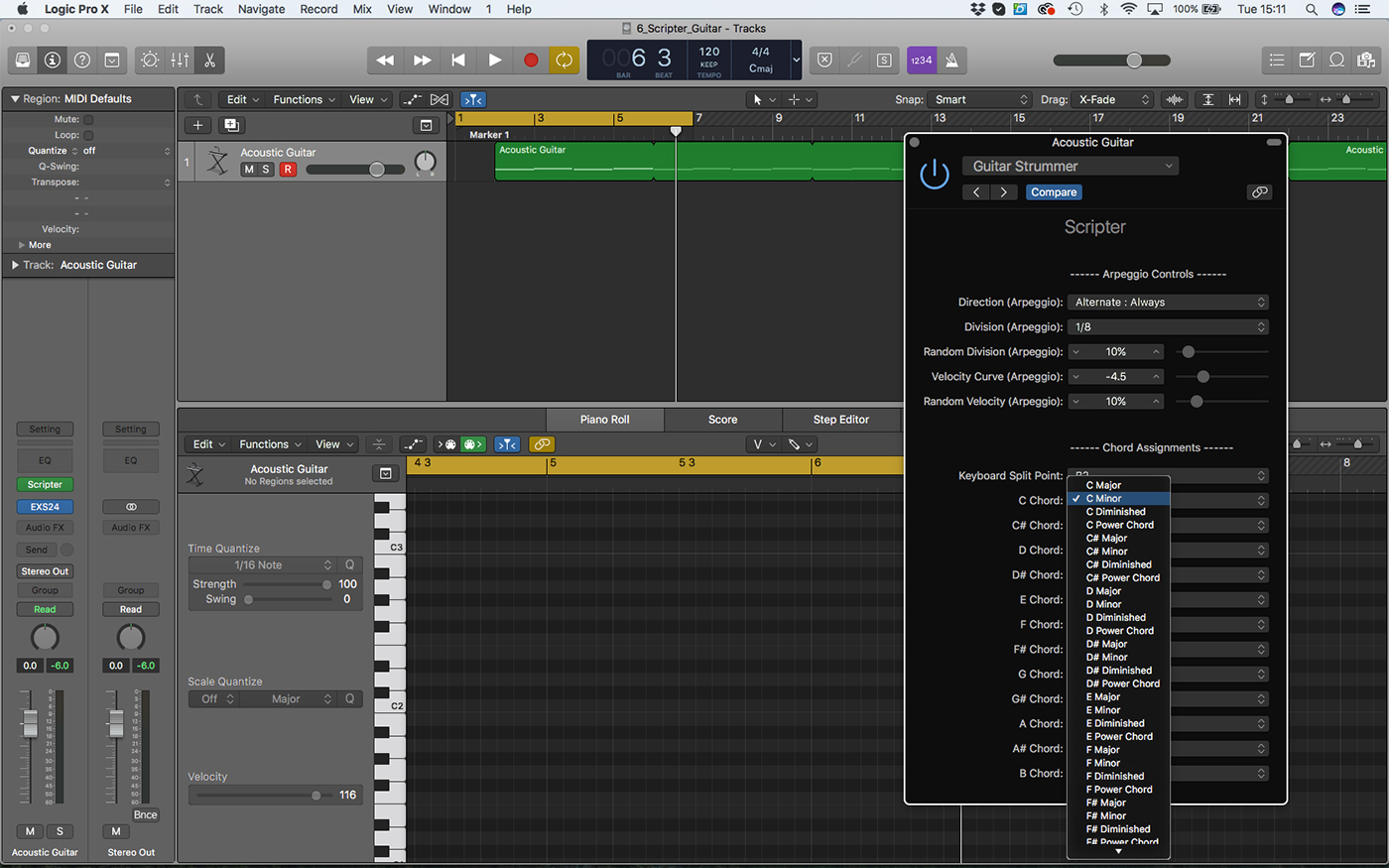 18. As with the Drum Kit Designer Embellishments script, you can use the lower part of the plug-in window to remap chord assignments into each of the 12 different chord slots. This is great for accessing minor keys.