Make a beat inspired by Woi, from the godfather of UK drill Digga D and producer M1 On The Beat. 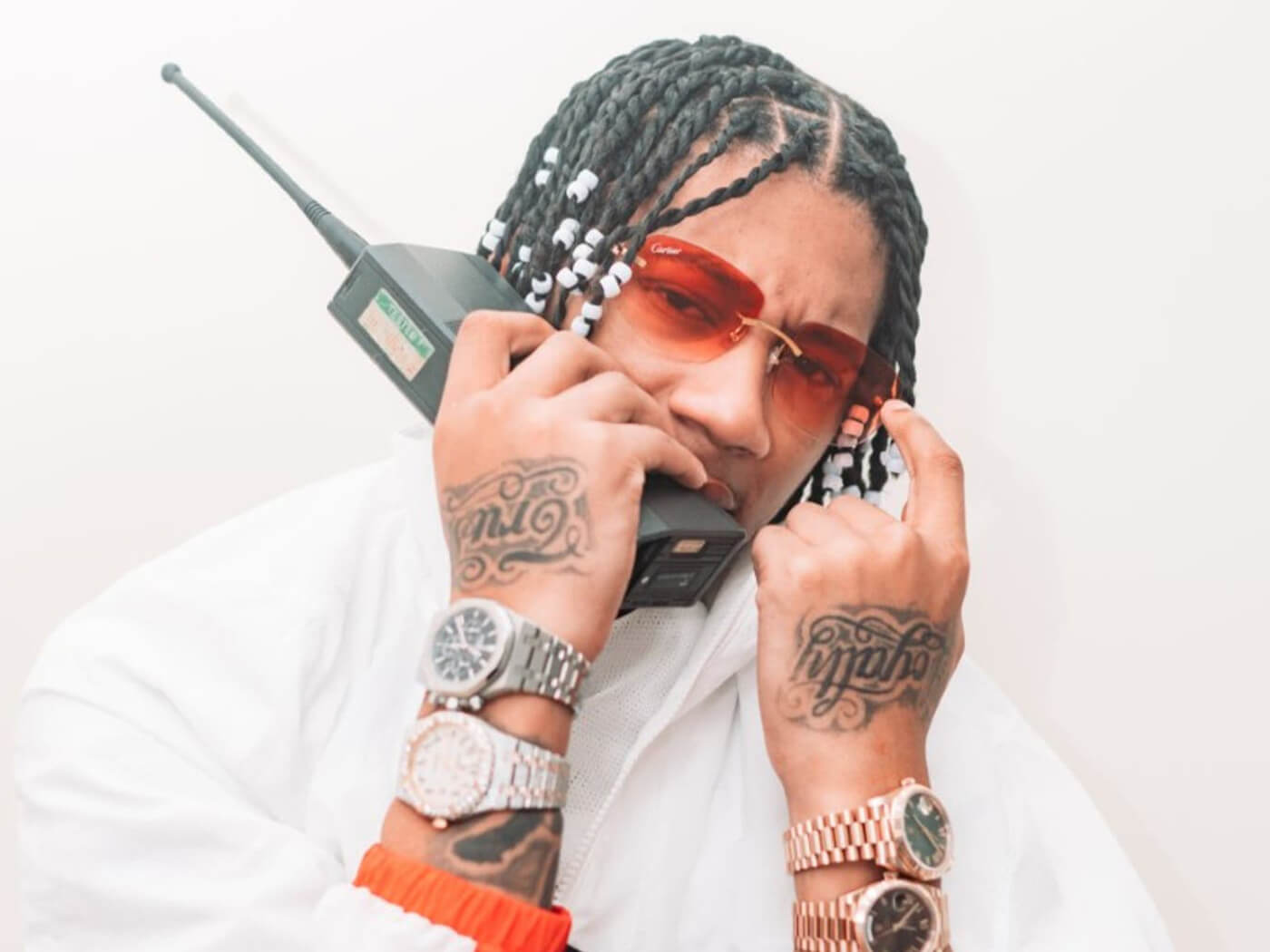 Digga D’s rise to stardom has been meteoric, and at 20, he’s already considered by many as one of the godfathers of the UK drill scene. Hailing from Ladbroke Grove in London, Digga first became active in the UK rap scene in 2015, forming the 1011 crew with several friends from his local youth club and releasing several singles in 2016.

Since then, he’s amassed hundreds of millions of streams, built a dedicated fanbase, collaborated with UK rap legend AJ Tracey and released his mixtape Made In The Pyrex, which reached number three in the UK album chart. And all of this while having to effectively self-censor his lyrics due to a 2017 criminal behaviour order.

We’ll be exploring the production techniques used by leading UK beatmaker M1 On The Beat for the recent single Woi. As well as working with Digga D, M1 has also made beats for Loski, Headie One and Drake. In this tutorial, we’ll break down some of the beat making, bass creation and musical techniques the producer uses so you can make your own hard-hitting drill beats.

We’ll start by looking into how M1 created the drums in Woi. First, set your DAW’s BPM to 70, a staple tempo for drill and trap beats. Put down a hi-hat groove that we can build upon later. We called up the Rep That kit in NI’s Battery 4, which has some great sounding samples for the drums. 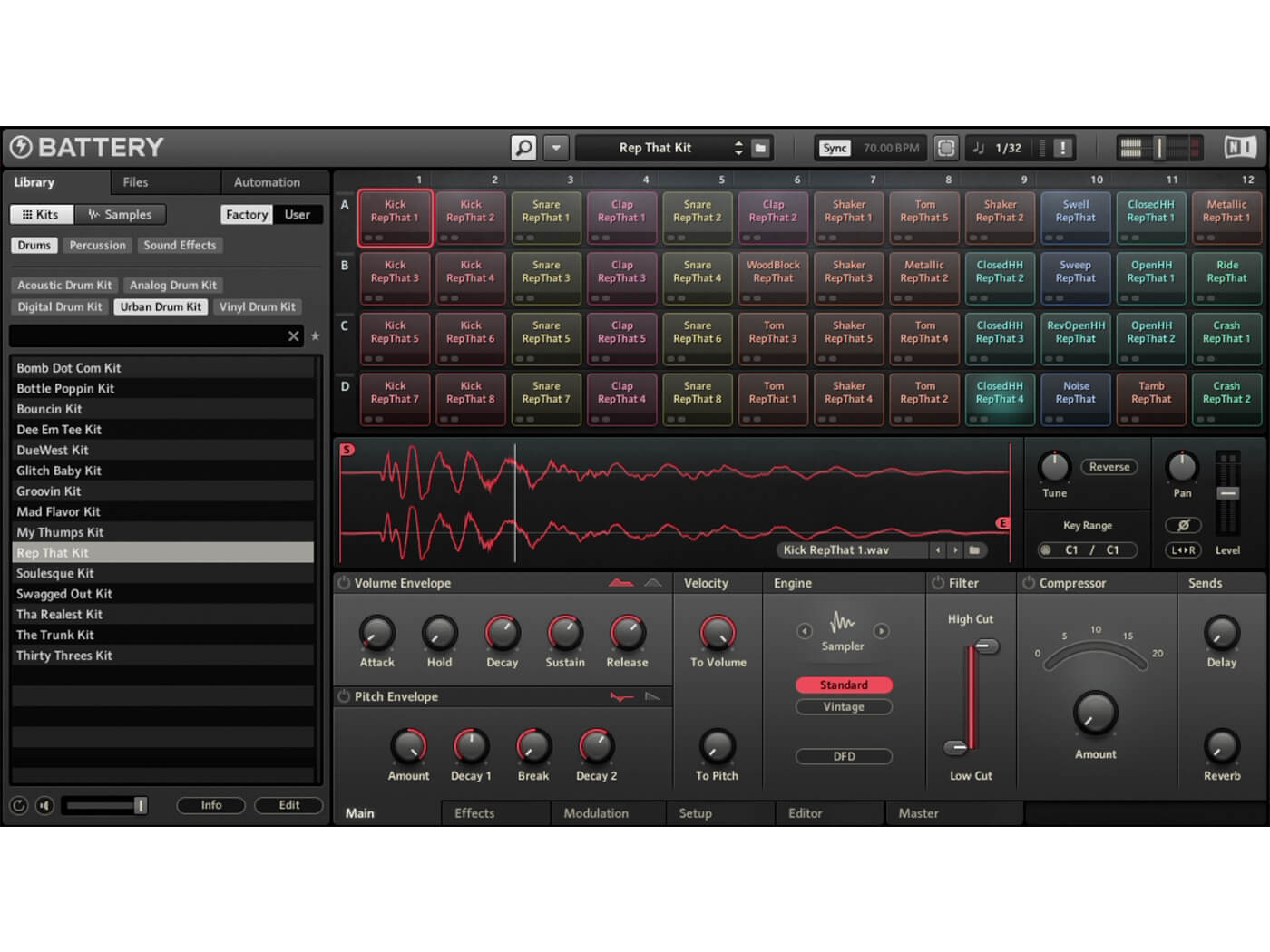 After setting the piano roll to 1/32nd notes, draw in three closed hats for each beat using ClosedHH Rep That 4. Leave two intervals between each hat. For the last note in the bar, double up the final hat to add a simple fill. Finally, increase the velocity of the first hat of each beat to add some subtle variation.

Next up, we’ll programme in a kick pattern using Kick Rep That 6, which has a similar deep tone to the kick in Woi. Place a kick on the first beat of the bar, with another on the offbeat of beat 3 and a third on beat 4. The kick pattern in Woi varies over four bars, so duplicate the hat and kick notes across a 4 bar MIDI clip. On bar 2, place another kick on the 16th note before the second kick, with bar four featuring a final kick on the offbeat.

To complete the kit, programme in some snare hits using Snare Rep That 2. After placing a snare hit on the second beat of each bar, place the second snare on the last 16th note of each bar. To finish off, draw in another snare hit on bars two and four that hits 1/32nd note before the offbeat to recreate the off-kilter snare pattern used frequently by M1.

One of M1’s production trademarks are his basslines, and how they glide effortlessly from lower to higher notes. M1 uses FL Studio, which has a ‘slide notes’ feature that allows you to program glide (portamento) on the piano roll. If you’re on another DAW, you can make a similar sound using any sampler with a glide feature.

The bass in Woi has a distorted tone, so we grab a suitably processed sample from the Bandlab Sounds Textured Subs pack (TS_G_SubDeskPulse.wav) and place it straight into our DAWs sampler, with the root note set to G3. Enable the sampler’s glide function, with a glide time of 60ms. If you hold down one note while playing the next, you’ll trigger a glide, for that M1-style effect.

Next, we set up a loop point towards the end of the bass sample, so that a long run of gliding notes could be played without the sample ending prematurely. Turn on your sampler’s snap function, so that the loop snaps to a zero crossing for the beginning and end, eliminating unwanted clicks and pops.

As with many other drill and trap basslines, the bass notes hit simultaneously with the kick. To prevent masking, increasing the bass sampler’s amp envelope attack to around 25ms. This makes space for the kick. To finish, we used a little EQ to roll the low frequencies off at 50Hz and the highs off at around 3kHz, giving our bass a slightly hollow sound similar to Woi.

As with many other UK drill tracks, the melodies in Woi are deliberately sparse, leaving plenty of space for the lead vocal. The haunting piano line is a sample supplied to M1 by one of his collaborators, acting both as the main musical hook and setting the tone stylistically for the track. We created a similar riff with MIDI, then play it back using our DAW’s bundled grand piano.

This works fine as a dry sound, but it’s vanilla and lacks the original’s washed out, melancholy tone. To fix this, we dial in some effects using XLN Audio’s RC-20 Retro Color multi-effects plug-in. After selecting the Init preset, a splash of 15ips tape noise adds character, roughing up the pristine tone of the piano.

We mix a tiny bit of wobble in, moving the wow/flutter slider to increase the amount of wow, similar to playing the piano lick back from an old tape or vinyl record. Then, a touch of tube distortion adds some grit, further removing the clinical preset piano feel. To give our sound the washed out, spacious ambience of the original, we load up RC-20’s space effect, decreasing the decay to 50% and adjusting the high focus to about 2kHz to take some of the high-frequency bite away.

To finish, we use the built-in high and low-pass filter to take the lows away from 400Hz down and also remove the highs from around 4kHz, pushing the piano back in the mix and completing the effect we were after. If you don’t have RC-20 Retro Color, you can achieve the same effect with a chain of other plug-ins, too.

Now we’ve made drums, bass and piano parts, it’s time to turn these into a fuller arrangement. An essential part of adding depth and detail to any production is the use of effects and edits to punctuate different parts of the arrangement, giving subtle clues that one section is finishing and another is about to begin. Let’s explore some of the tricks used by M1 in the Woi arrangement.

Export the drum parts to three separate audio channels, allowing you to edit the audio directly. Then duplicate all the parts into two 16 bar sections, with four bars of piano before as an intro. The first bar of the drop in Woi has a simple edit
where the bass and drums are muted, so mute those parts except for the second and third kicks, creating a fill.

Next, you can try cutting all of the parts from the first beat of the second eight bars, adding extra impact when it all comes back in. This also leaves space to punctuate the lyrics that would be present at this point. IN our example, we also reverse the last snares in the first 16 bar section similarly to the Woi beat, helping to mark out the end of the phrase.

A simple high-pass filter edit on the kick for the first bar of the second sixteen completes our edits; we use our DAWs EQ for this, with some automation to turn off the effect after the edit.

For a more authentic sound, we process the drums a little more, starting with the snare. While it sits in the right space, it sounds too clean and inoffensive, so applying some saturation gives it more crunch and texture.

We add Softube’s Harmonics to the snare channel, then select Tube mode. Pushing the input gain upto 9dB drives the signal harder into distortion, as does increasing the drive amount to maximum. After nudging the character dial to 6 for extra upper harmonics, we pull the output gain down to -5dB to compensate for the extra level add. If you don’t have Softube Harmonics, you can use your DAW’s stock drive or distortion plug-ins.

To give the entire drum track more depth, try grouping the drums together and added a 3dB low shelf EQ boost at 200Hz using your DAWs stock EQ. This not only adds extra weight to the kick drum, but gives a subtle depth to the other elements in the kit too. In our mix, the piano was sitting too far forward, so we turn it down by 3dB. It’s important to make melodic elements a little quieter sometimes to make space in the instrumental for a vocal to sit nicely.

The final result is a UK drill style instrumental that showcases a number of the techniques used by M1 On The Beat in his productions for Digga D. The drums have a similar, heavily quantised feel to the Woi beat, while the gliding bass and washed out keys are typical of both M1’s style and UK drill in general. As many drill tracks are made using a DAW, plug-ins and basic equipment, it shows anyone can make top tier drill instrumentals with the right production chops.