How To Emulate the Sounds of Blade Runner

If you’ve ever wondered how Vangelis created that amazing soundscape in the film Blade Runner, Dave Gale shows you how, but without the necessity of spending a small fortune on an analog classic. I think we all agree that there’s something about Vangelis’s music which is somewhat identifiable, particularly the music from the earlier part […]

If you’ve ever wondered how Vangelis created that amazing soundscape in the film Blade Runner, Dave Gale shows you how, but without the necessity of spending a small fortune on an analog classic. 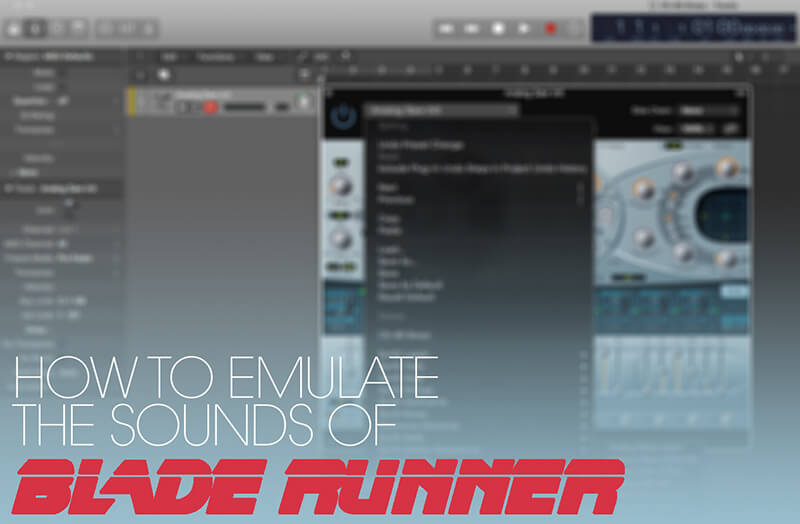 I think we all agree that there’s something about Vangelis’s music which is somewhat identifiable, particularly the music from the earlier part of his career, both as a solo artist, and as a composer working on films such as Chariots of Fire and Blade Runner. But what is it that makes his sound so full of character and instantly recognisable? In no small way, it’s down to his main choice of synthesiser, which has become something of a vintage classic.

The Yamaha CS-80 was a flagship monster of a synth, manufactured in the latter part of the 70s, which became the most used machine in Vangelis’s arsenal, throwing up a certain sonic calling card, alongside various other instruments of the time. Offering true polyphony, it also offered a host of performance features, such as a ribbon controller and velocity sensitivity, which was a real rarity for the time. Despite it’a all analog voice structure, it was notorious for instability in tuning, while physically weighing in at a considerable 220lbs. There were stories of musicians having their floors reinforced to cope with the weight of them.

There are a couple of bespoke CS-80 plug-ins on the market, but it is possible to do a very reasonable facsimile of the infamous Brass Swell patch, on any software synth that offers a couple of oscillators, choice of filter and some modulation options, so we take a look at the ES-2 found in Logic Pro to see how close we can get. 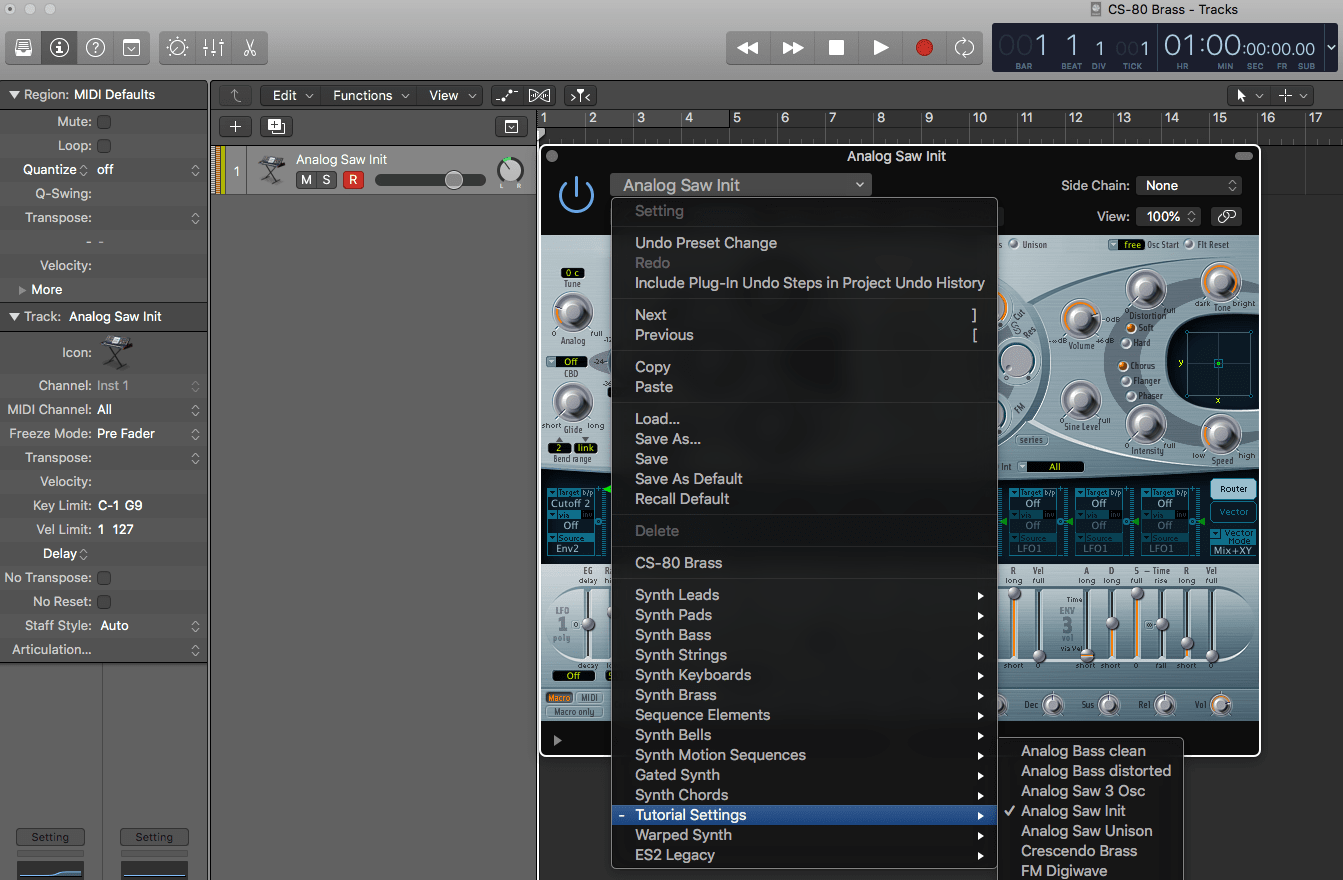 1. Start by opening up the ES-2; rather helpfully, there’s an initialise patch available called ‘Analog Saw Init’ which can be located from the ES-2s drop down, in the Tutorial section. This will give us a timbre consisting of a single Saw Tooth from oscillator one, which is exactly what we require as a starting point. 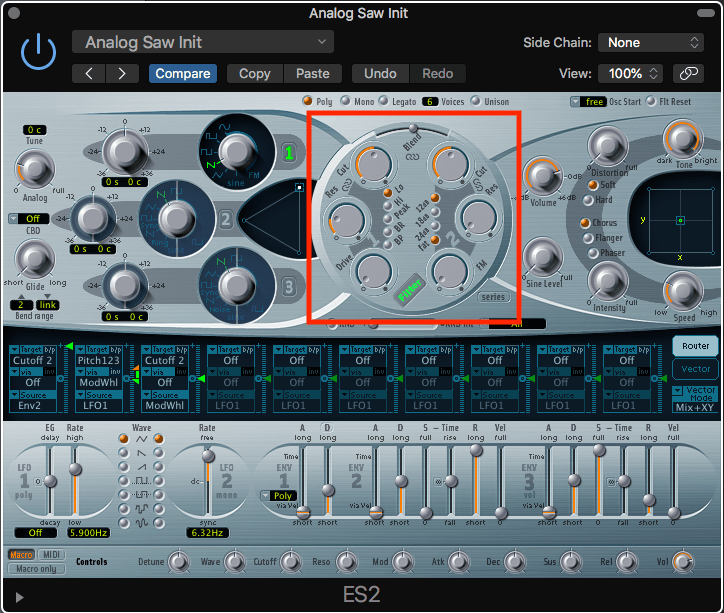 2. Now we’re going to turn our attention to the filter. The ES-2 offers two filters, which offers a certain similarity to the CS-80, so move the Blend control, located at the top of the filter section, to the middle, while moving both cut off controls to a 12 o’clock position. We’ll be adjusting these later, so don’t worry about being too accurate. Finally, toward the right-hand side of the filter, select 12db/fat, which will add a little grit to the signal. 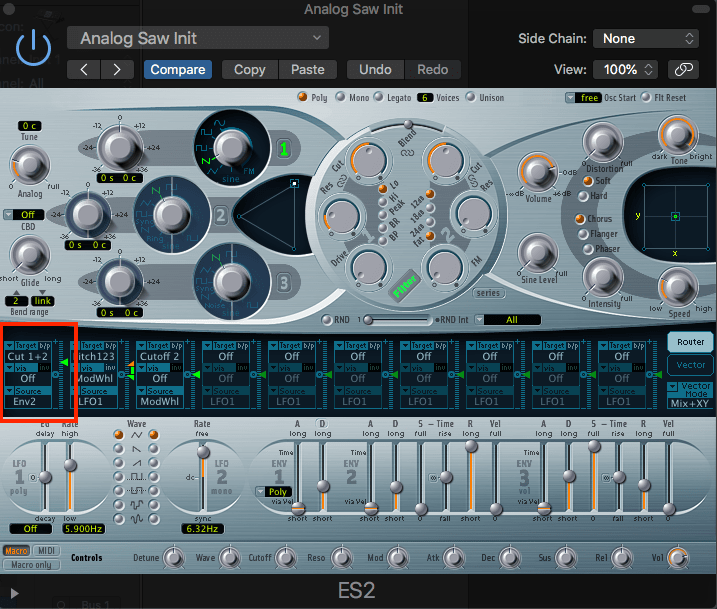 3. We’re now going to assign one of the Envelopes to both filter cut offs. We do this by using any of the available slots on the modulation matrix, which is across the central form of the synth. By default, you may already find Env2 routed to Cut Off 2, in which case you can use this, but adapt it by clicking on the drop-down menu, and selecting Cut 1&2. Adjust the Amount slider, located to the right of each matrix pod, to something close to around 33% positive, as shown. 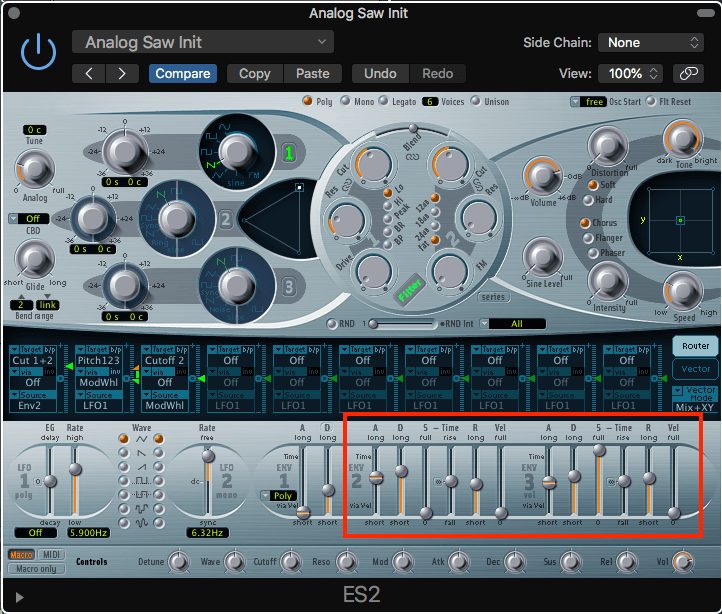 4. Linking in with our previous step, it’s now time to adjust the envelopes to control both filter cut off and amplitude (volume). The most important element here is the Attack phase on Env 2, as this will give us the distinctive brass swell.

Setting the Attack to around 1s, or 1000ms, will start to give us a healthy nod to the original filter swell, but it’s also important to increase the Decay and Release phases, so that the decay is not too quick either. As Envelope 3 is looking after the volume of our sound, there will be certain similarities to Env 2, but it might be a good idea to use a shorter attack time and longer release time, while also using a reasonably full sustain level, so that the sound never dies away complete, when being held on the keyboard. 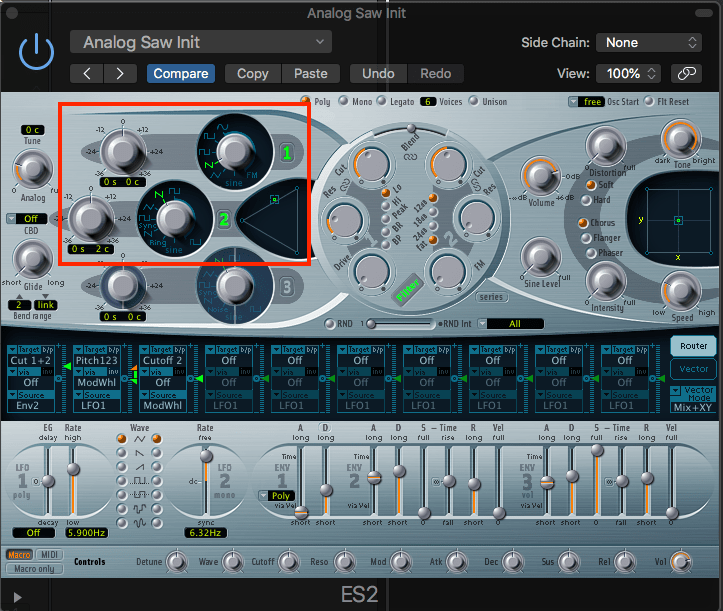 5. Now we’re starting to hear something which is reminiscent of the classic Vangelis timbre, but if you play a note or two, you’ll notice that it’s sounding rather thin. This is where we bring a second oscillator into play, to induce some thickening, as the tuning of a second oscillator slightly jars against the first. 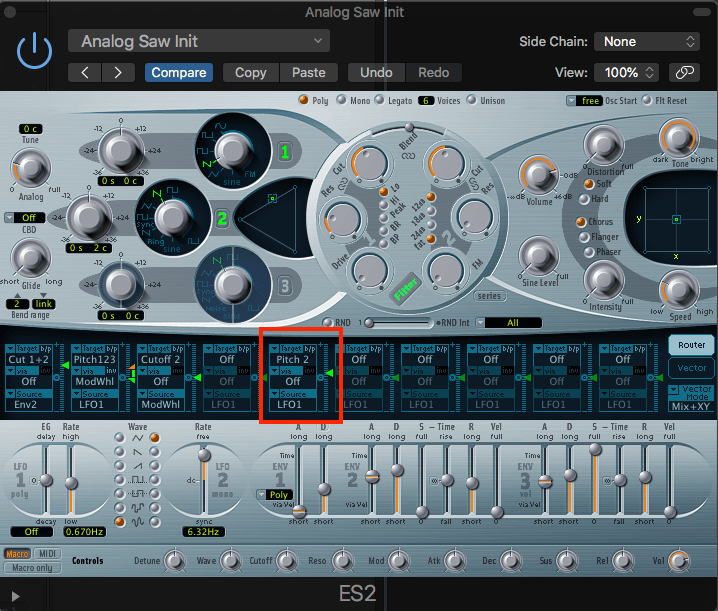 6. Although this will start to sound quite rich, the CS-80 offered degrees of instability in tuning, so we are going to recreate this using a Slewed Sample + Hold. First, we need to head to the Modulation Matrix again, and route LFO1 in the direction of Pitch 2, meaning that it will only vary the pitch of Oscillator two. We’re only going to send a very small amount of modulation here, so using the amount fader to the right, select an amount close to 0.10. 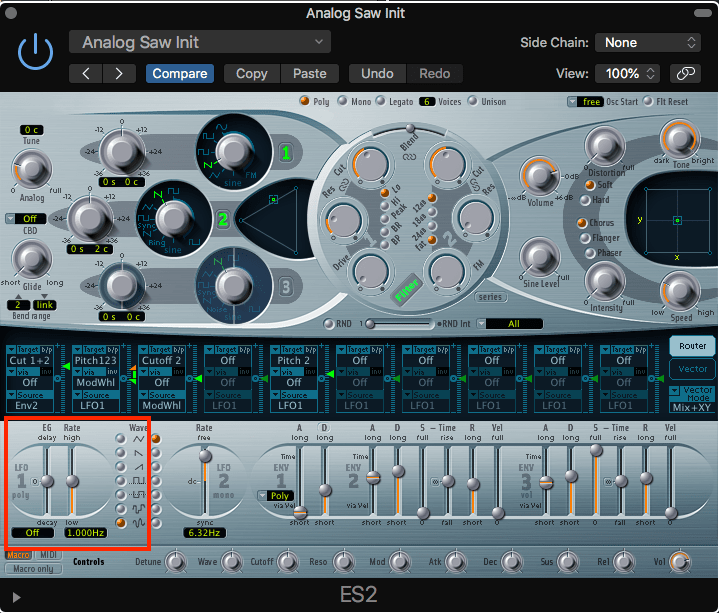 7. Looking at the modulation source, we can now change the settings of LFO 1; start with a rate of around 1hz, and select the Slewed Sample + Hold (Random) LFO setting, which is shown at the bottom of the row of Radio buttons. 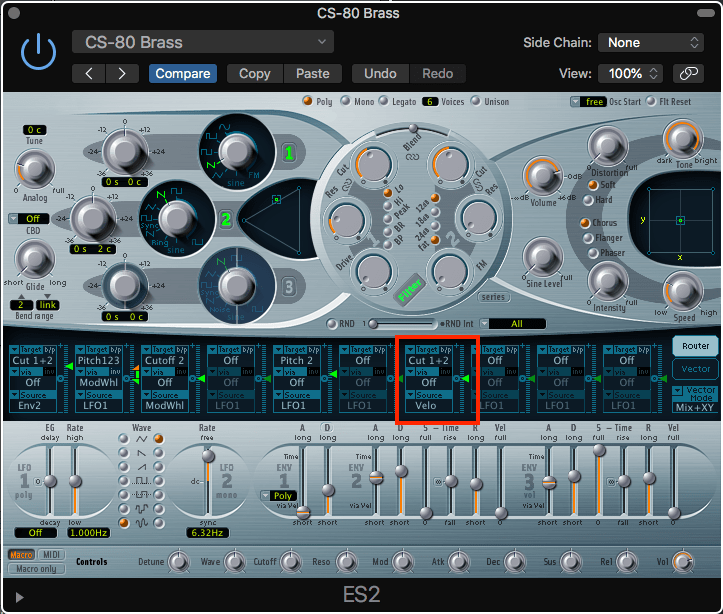 8. The timbre that we have now is very reminiscent of the CS-80 Brass Swell and at this stage, you may wish to save your preset. Due to the nature of the sound, it’s quite likely that you may wish to tweak certain aspects of this sound.

Adding a small degree of control of the filter, via velocity control, would also emulate the CS-80, and achieving this follows the same principal as other settings we have made, through the Modulation Matrix. If you choose to do this, you might also need to reduce the filter cut off amounts, on both filters, in the filter section.

9. Although the actual synth timbre is really important to try and get right, it’s the addition of some effects that are going to really bring this patch to life, as all the detuning magic swirls around.

10. Now we’re going to add some delay and reverb to the Bus’d (Aux 1) signal. Tape Delay is a good choice, as it will introduce some further analog imperfections into the signal. Add a good dose of feedback, and a generous amount of Wet mix.

Adding a long merciless reverb is next, with Logic’s new Chromaverb proving very useful here. A nice bright, responsive reverb, such as the Airy default is perfect, allowing you to tweak the settings to taste. I favour a longer reverb time of around ten seconds, while boosting the EQ in the top end, as this will really respond to the cut off swell. 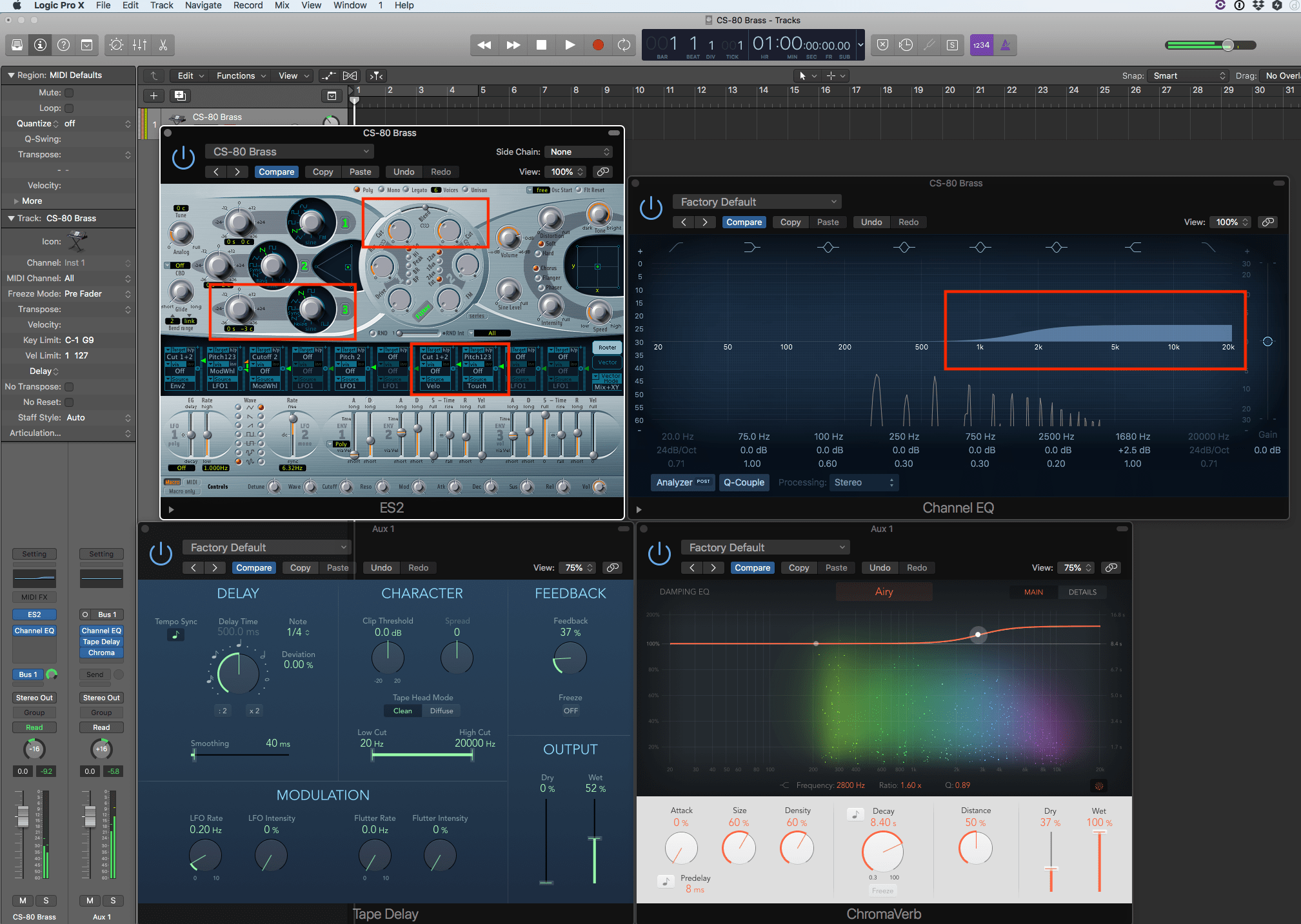 11. Now that we have something which is pretty close, it’s all down to a little tweaking to allow for personal taste. Looking back toward the ES-2, the addition of a third Saw Tooth based Oscillator will thicken up the texture even further, while a touch of filter and pitch control, set within the modulation matrix, and driven via velocity and aftertouch accordingly, will help add further humanising factors that will really help the colour of the timbre.

As can be seen, a little reduction in the filter cut off will help any louder velocities not get out of hand. And finally, a slight tinge of brightness in the ES-2s EQ will keep the timbre bright and colourful.

And there we have it! A beautiful Brass-like swell, which pays homage to the CS-80 and the Maestro Vangelis himself, with plenty of colour and movement within the stereo image. Maybe it’s time to make that call to Ridley Scott, about his next Feature!