How To Create Chopped Vocal Bass in 12 Steps

Alex Holmes shows us how to create chopped vocal bass from a simple vocal phrase to use as the foundation for a track… This fun technique was initially inspired by the track Lightspeed by Errorsmith (the guy that co-designed Razor with Native Instruments). It involves recording a vocal phrase, preferably at a single pitch, and […] 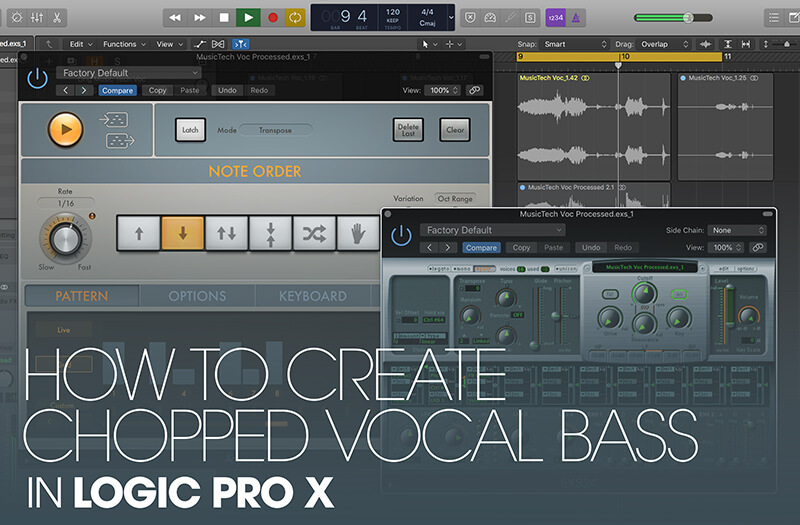 This fun technique was initially inspired by the track Lightspeed by Errorsmith (the guy that co-designed Razor with Native Instruments).

It involves recording a vocal phrase, preferably at a single pitch, and then turning it into an evolving bass instrument by sampling it and then manipulating the start point. 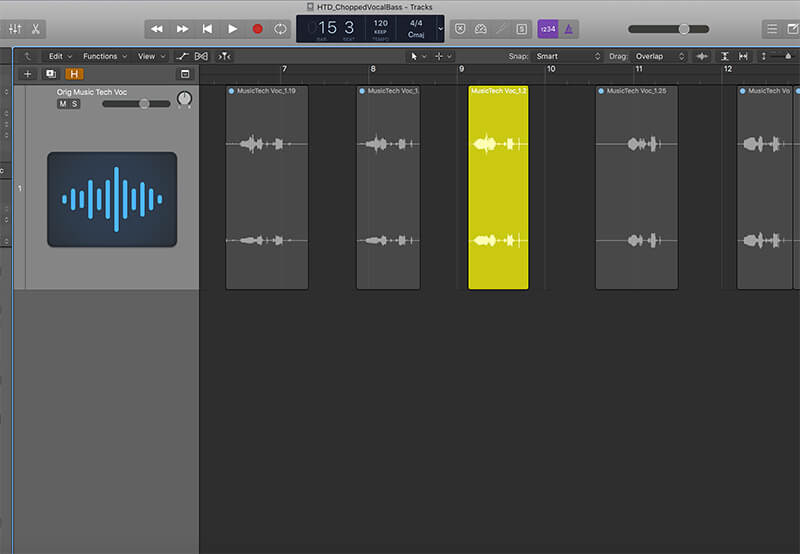 1. The first step is to record a short and simple vocal phrase, ideally with a few different vowel sounds. We’ve gone for a monotone performance of the words “Music Tech” repeated a bunch of times, then chopped them up and selected the clearest sounding one. 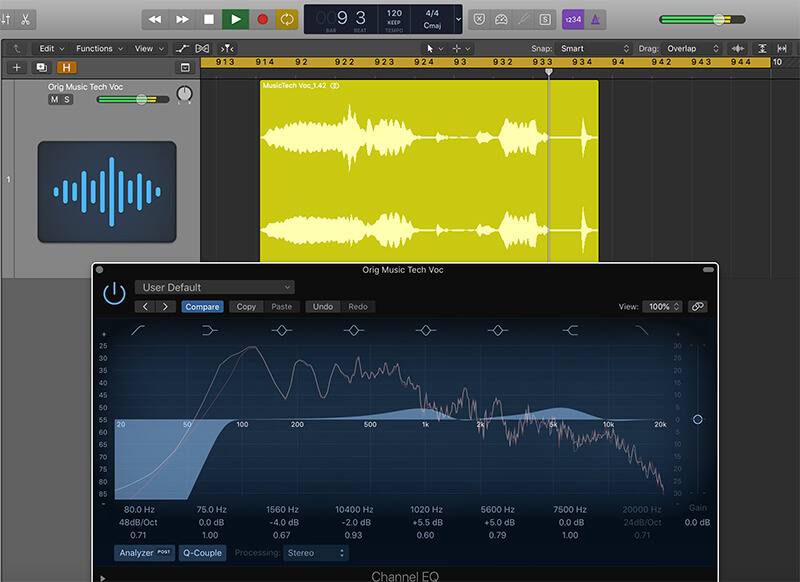 2. Now we’ll want to tidy this up a bit. First we’ll add an EQ with some low cut to make sure there’s no low end rumble, although we’ll retain the main low bump around 100Hz. We’ve also added a couple of subtle boosts higher up to help increase the intelligibility. 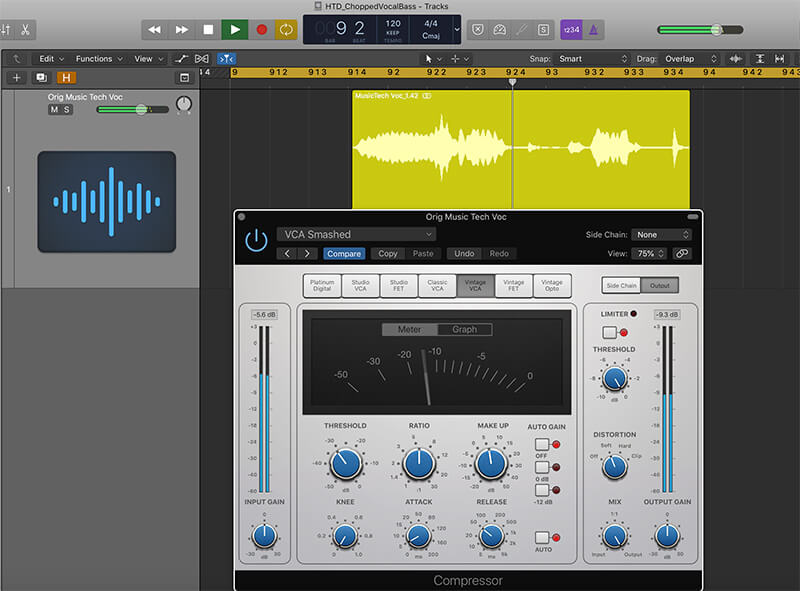 3. The dynamics are fairly flat, but let’s crush it with a compressor anyway, as we want to bring out even the smallest details. We’ve also gone for some soft saturation on the output, although you’ll want to be careful that you don’t go into distortion territory just yet. 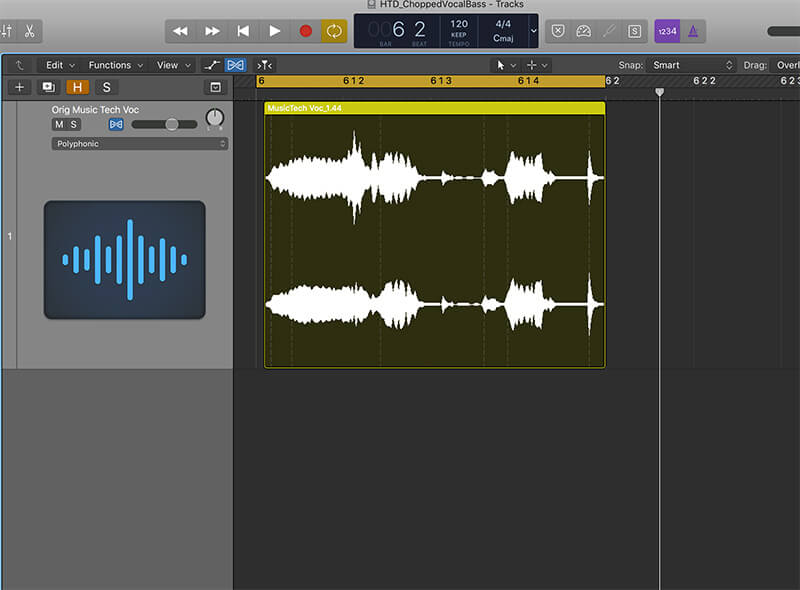 4. Our final step with the raw audio is to switch on Flex to play with the length. Due to limitations with manipulating the start point in Logic’s EXS24 sampler, we’ll need to shorten the audio, but if you’re using a different instrument such as Kontakt, you could experiment with longer time-stretching and different Flex algorithms. 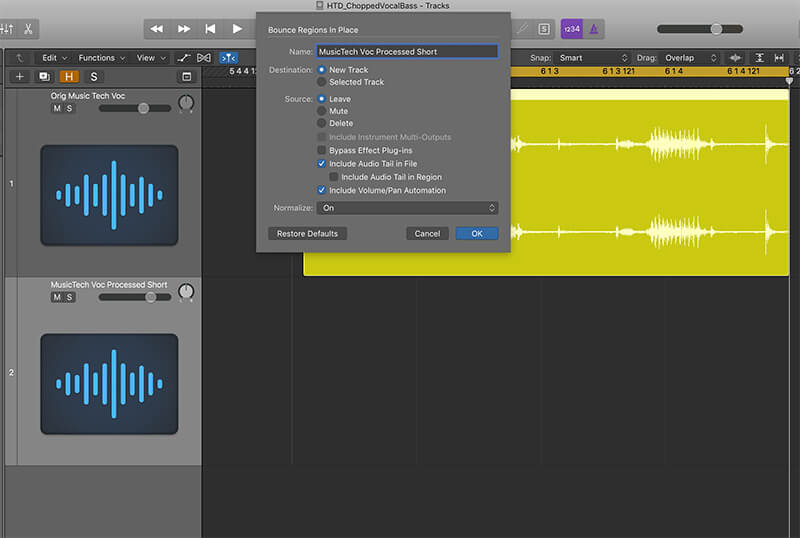 5. Now we’ll bounce the region in place to give ourselves something to put in the sampler, and set the file to Normalise, as we want a healthy signal. We’ve also turned on the Limiter in the Compressor plug-in to catch any extra peaks caused by the time-stretching. 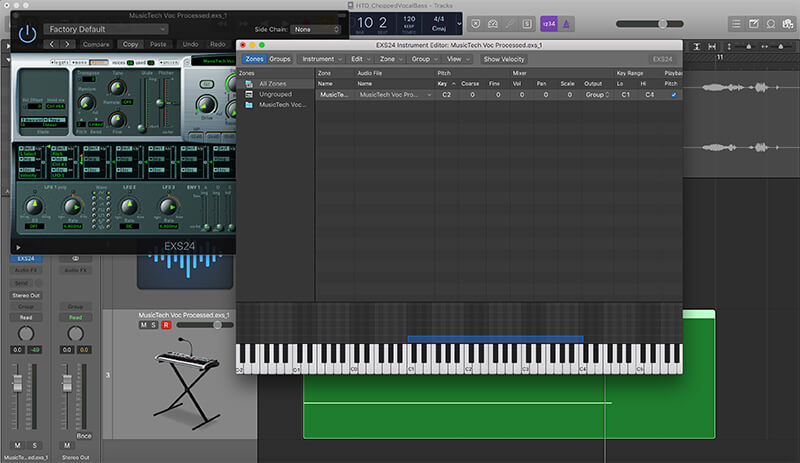 6. Next we want to convert the region into a sampler track, creating a zone from the region, not the transients. Once in EXS24, we can go into the editor and extend the note zone to cover the keyboard to make it playable and set the root key. 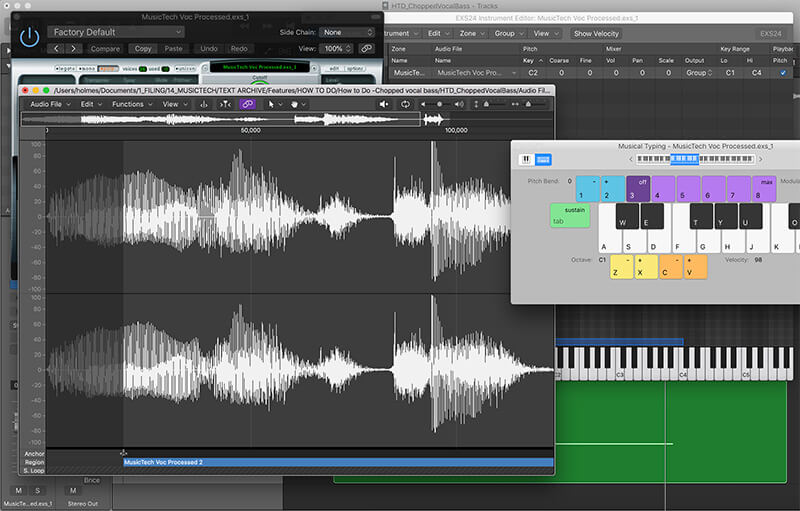 7. You should now have a playable vocal instrument! If you double click the audio file name in the EXS24 editor, you will open up the sample editor and be presented by the waveform. Try playing the keyboard whilst moving the start point at the bottom of the window. 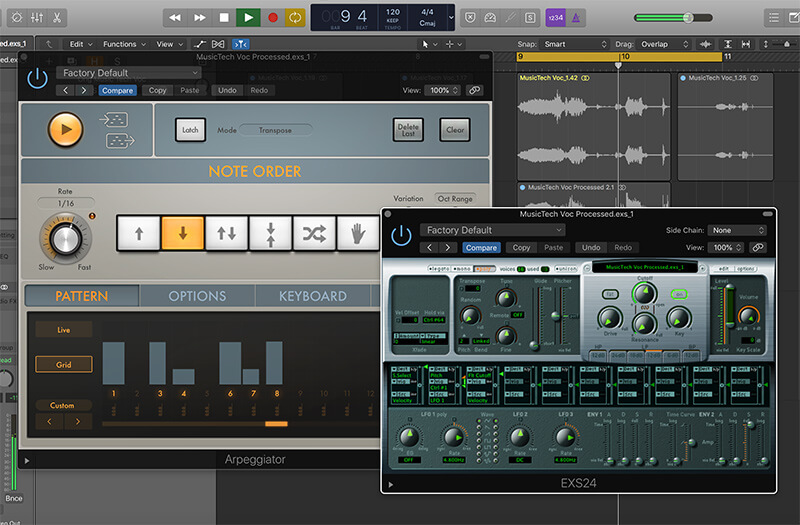 8. Now we want to record in a MIDI bass pattern. We chose to program something into the arpeggiator to get a fast paced groove. You could add some extra detail by varying the velocities and set the cutoff filter in EXS24 to be subtly modulated by the velocity amount. 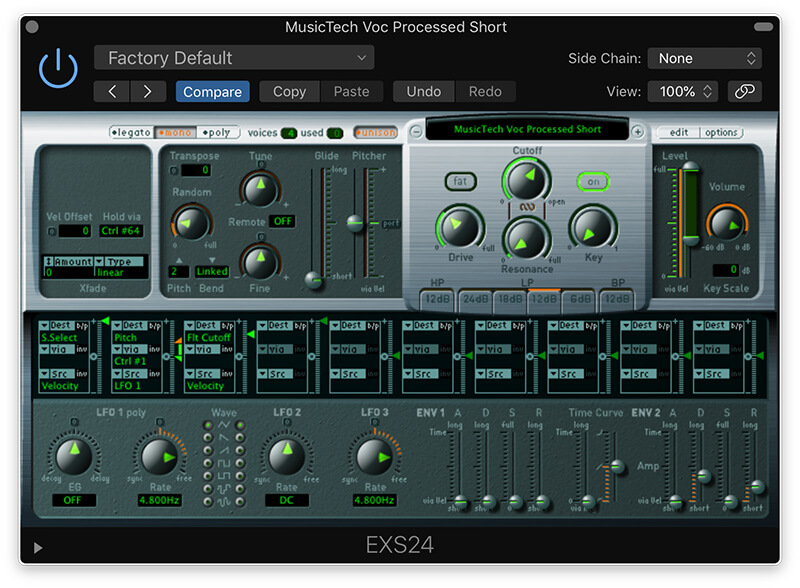 9. A few bits of housekeeping. You might want to set the sampler to Mono mode, and fine-tune the amp envelope to get a tighter sound. You could also add a touch of drive and thicken the sound using Unison and a touch of the Random dial. 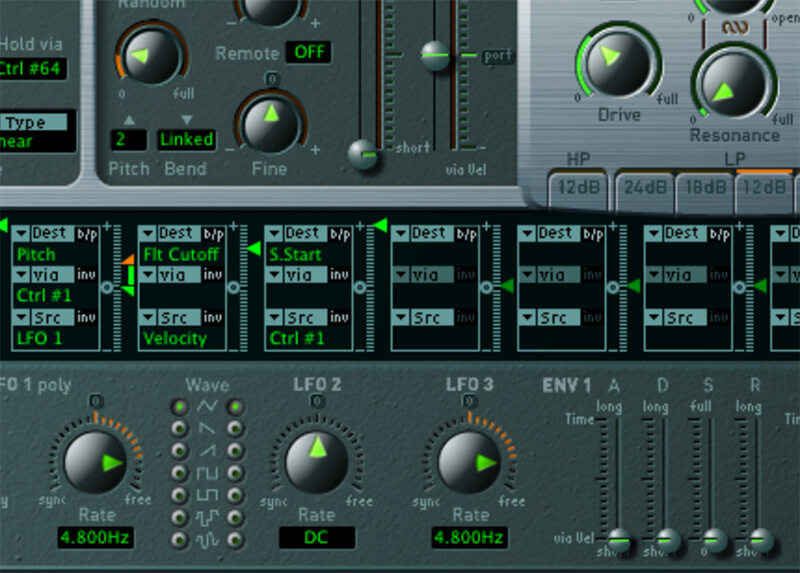 10. The next step is to set the sampler so that Modulation (CC#1) affects the sample start time. As mentioned earlier, EXS24 is limited so that you can only change the start time by +/- 500ms. You should now be able to modulate the sound while the riff is playing. 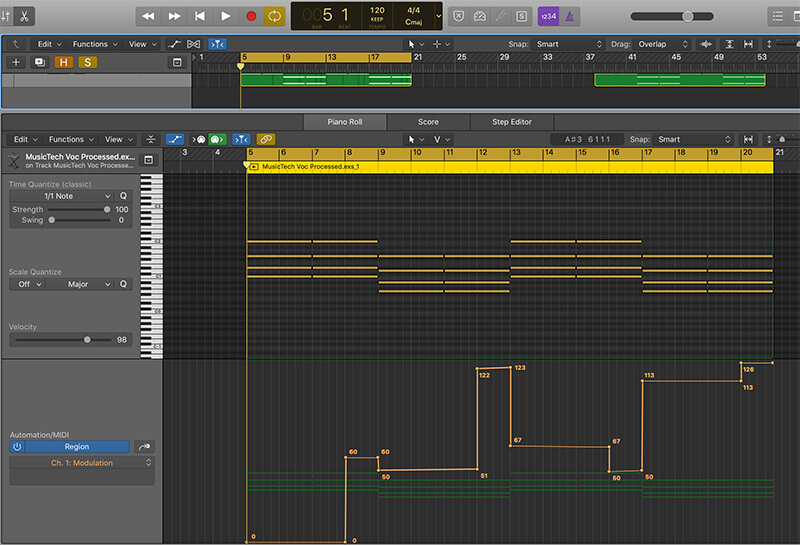 11. Experiment with drawing in CC#1 automation and find where the sample sounds at its best. We’ve decided to draw in stepped amounts so the riff jumps to different timbres, although you could also morph the sound by doing modulation sweeps or even assigning an LFO. 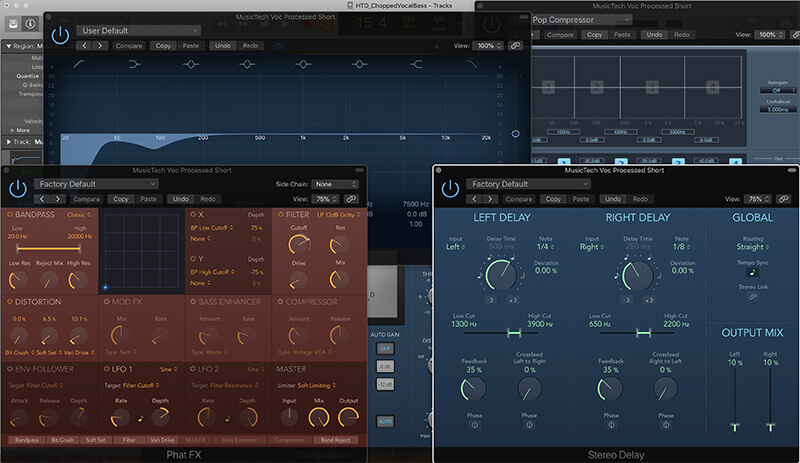 12. As a final step, we’ve tamed the sound using a multiband compressor and added some further EQ, compression, filtering, delay and reverb to give a little more character. At this stage you could decide whether to leave the riff bold and upfront, or to layer it with another bass sound.