We continue our Reason Sound Design tour by looking at the backbone of your music, the kick and snare. We show you how you can add punch to both – and how to mix them so that the results don’t clash… 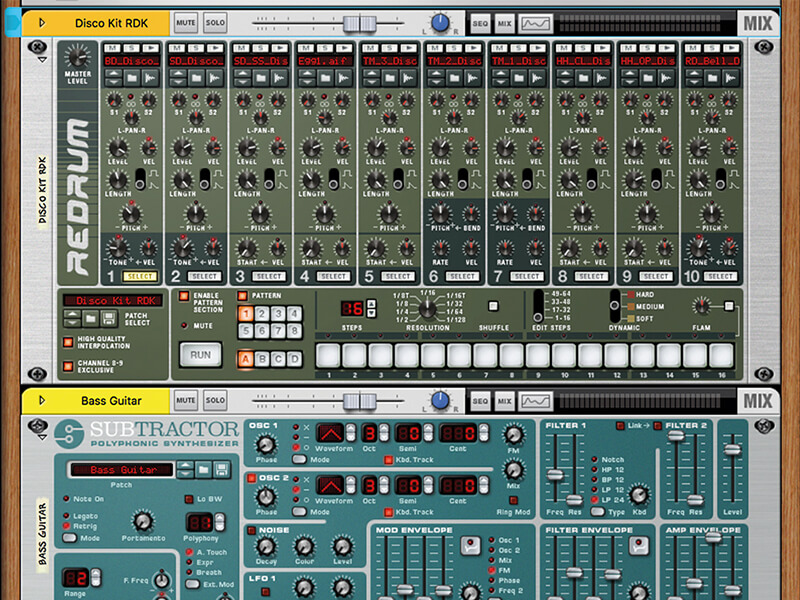 So far in our Reason sound-design series, we’ve gone from the basics of synthesis to going in-depth with one of Reason’s finest new additions, the Grain synth. We’ve also looked at how you can add attitude with Combinator and also how using that device can help you create and fatten synth sounds with relative ease.

This time around, we’re going to concentrate on some of the most crucial elements of any mix and look at how you can add punch to both. Later in the tutorial, we’ll also be entering mixing territory – which is sound design by another name, if you think about it. That’s because the kick and the bass are both difficult bedfellows, or mixfellows.

Neither the kick or the bass should really sit anywhere other than centrally across the stereo field, but as they both sit at the lower end of the mix, their frequencies can often clash. And if we’re adding punch to both, it’s possible that they might still clash across those ‘punchy’ frequencies that we have introduced.

Double trouble, then, as they’re sitting on top of one another in two sonic dimensions! Later in this tutorial we’ll look at how we can separate them but still retain their sonic character, using a couple of different techniques.

Low down and dirty

The first thing to note here is that kick and bass sounds can be very different, so adding punch and attitude might be a very different process for each and every sound you use. Just check out the different kit sounds in Reason’s Redrum or your own sample collections for how different kick drums can sound.

It’s the same with bass: most synths and many Rack Extensions come with a plethora of bass sounds and they will all be very different: from the drone-like sub of a drum ’n’ bass note to more attack-driven house and techno basses. This means we’re only going to apply some general rules in this tutorial, so be sure to adopt a certain amount of experimentation as you follow along.

However, there are two core ways to add attitude to both kick and bass – and those are our good friends compression and EQ. While you could easily pile on several different types of effect to do the same – most notably distortion and filtering – we’re saving those until next time around. This time, it’s a case of classic attitude building; next time, it’s more extreme!

When it comes to compression, this is useful for two reasons: smoothing out the bass or kick so it becomes more even, and adding some attitude by changing attack times. A compressor is basically controlling volume. You set a threshold to stop the volume of the bass or kick going over a certain level and a ratio to determine how much it reduces the volume if it goes over.

There are two other settings – attack and release – that determine how quickly the volume is reduced and increased back upwards. A medium attack time can give you more punch, while a faster attack time and slower release will help smooth over an uneven bass or kick.

In the workshop, we’ll experiment with a ratio of 4 or 5:1 and attack and release times of less than 200ms to give you some punch; then try a ratio of 6:1, with a longer release time and shorter attack time for extra smoothness. However, again, these settings will depend on your bass and kick sounds, so try other values.

The more obvious way to increase the perception of a bass or kick is to use EQ, but it’s not as simple as just boosting the bassier frequencies. In the workshop, we’ll show you how you can use EQ to really alter the very nature of your kick and bass sounds and at the same time, demonstrate how it’s all too easy to destroy them. However, some more subtle uses of EQ can add punch and attitude, while retaining the original character of each.

Finally, there’s the small matter of those clashing frequencies to sort out and, again, EQ is our friend here. By using a simple EQ curve, we’ll boost one – either the kick or the bass – in one area and reduce the other in the same region. That should lift one and lower the other, so they occupy slightly different areas in the mix.

Next time, we’ll look at some more dramatic effects to give you more attitude down under. Until then… 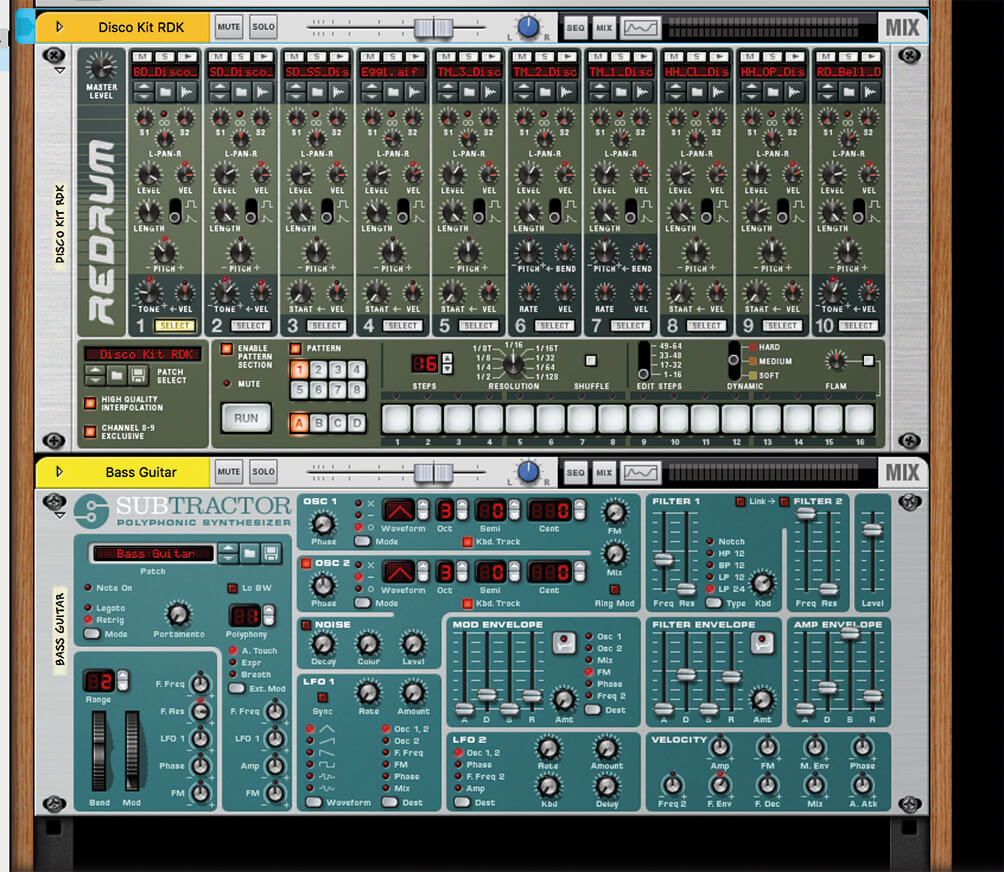 1. Here, we have a kick drum from the Disco Kit set up in Redrum and an acoustic bass from Subtractor set up as our kick and bass. You can load this in with the file ‘Reason SD kick bass’ or load in similar sounds yourself. 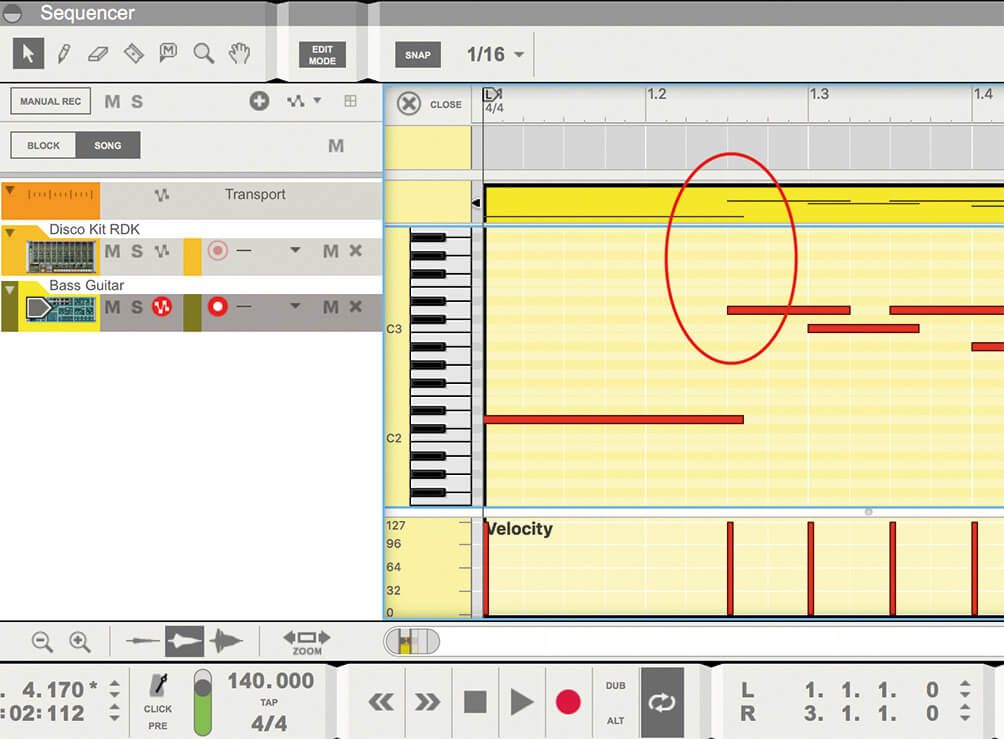 2. We’ve produced a few bars of notes where the two deliberately clash together and set some EQ and compression settings so they sound muddy together. It’s an artificial setup, yes, but it’s also a typical result when mixing. 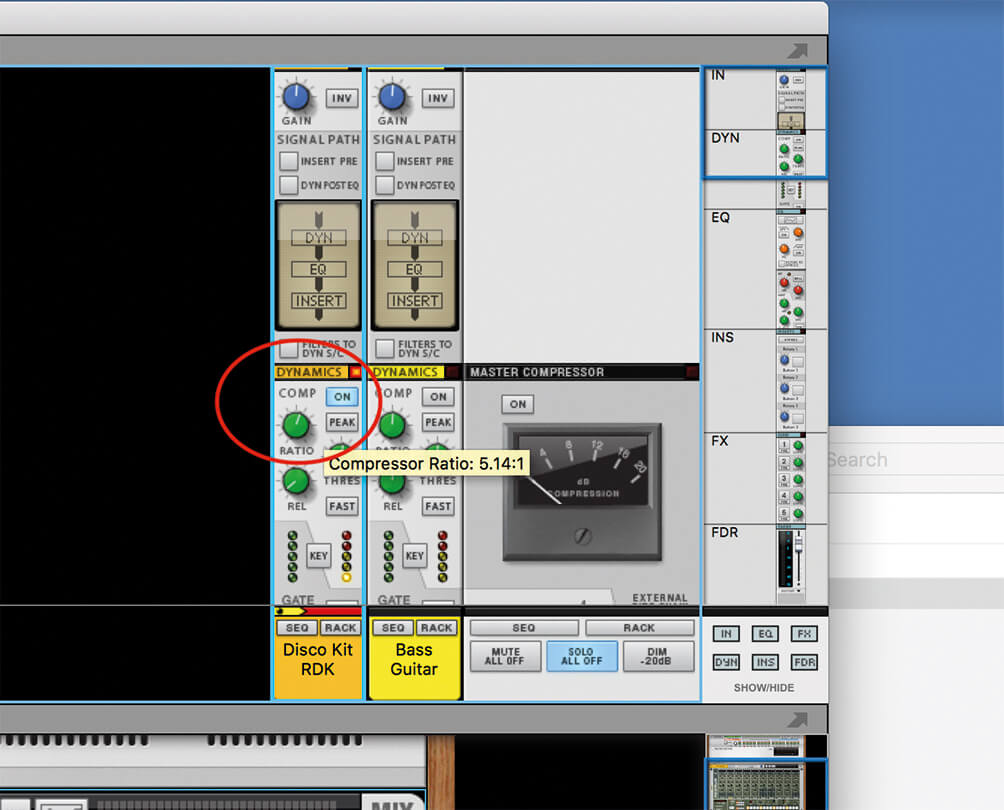 3. When compressing, first solo the kick and go to the compressor section in the main mixer area for the kick channel. Set your Ratio to around 5.1 for some punch. You can increase this for a smoother sound – it’s quite subtle. 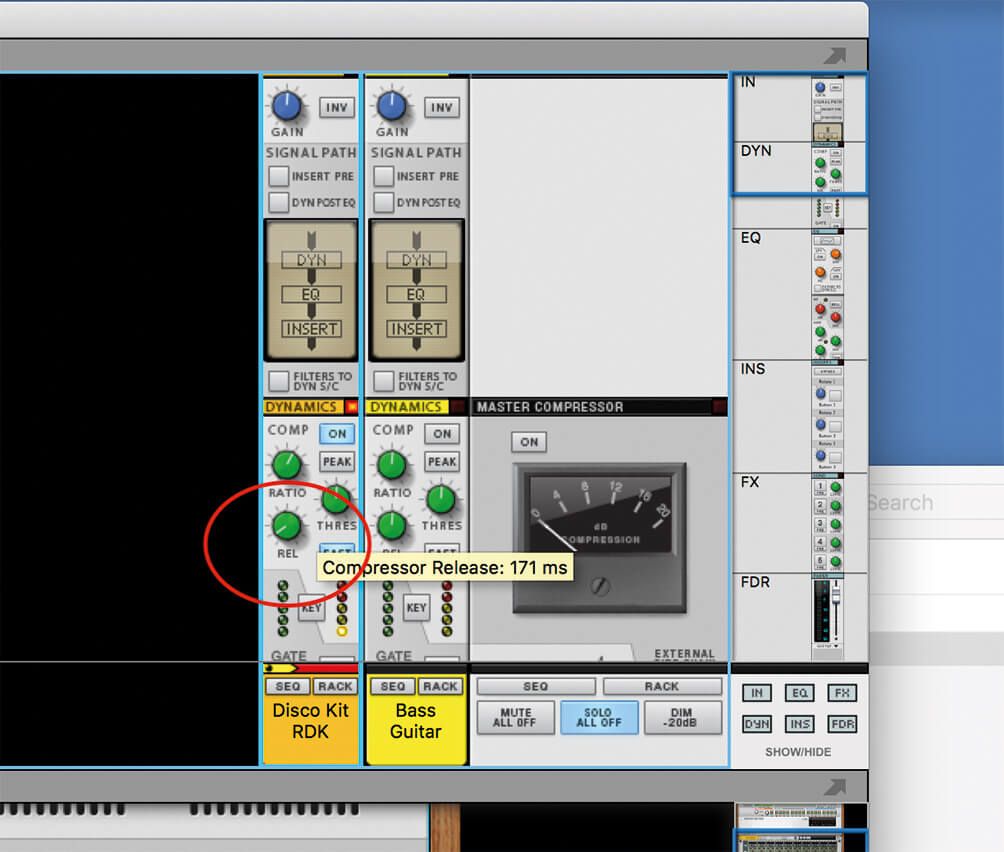 4. Now set the release time to a fast (low) setting of between 100-200ms. At this stage, again, it’s a subtle punch, but you’ll see the meter ’flick’ more as the release time decreases, indicating a sharper result. 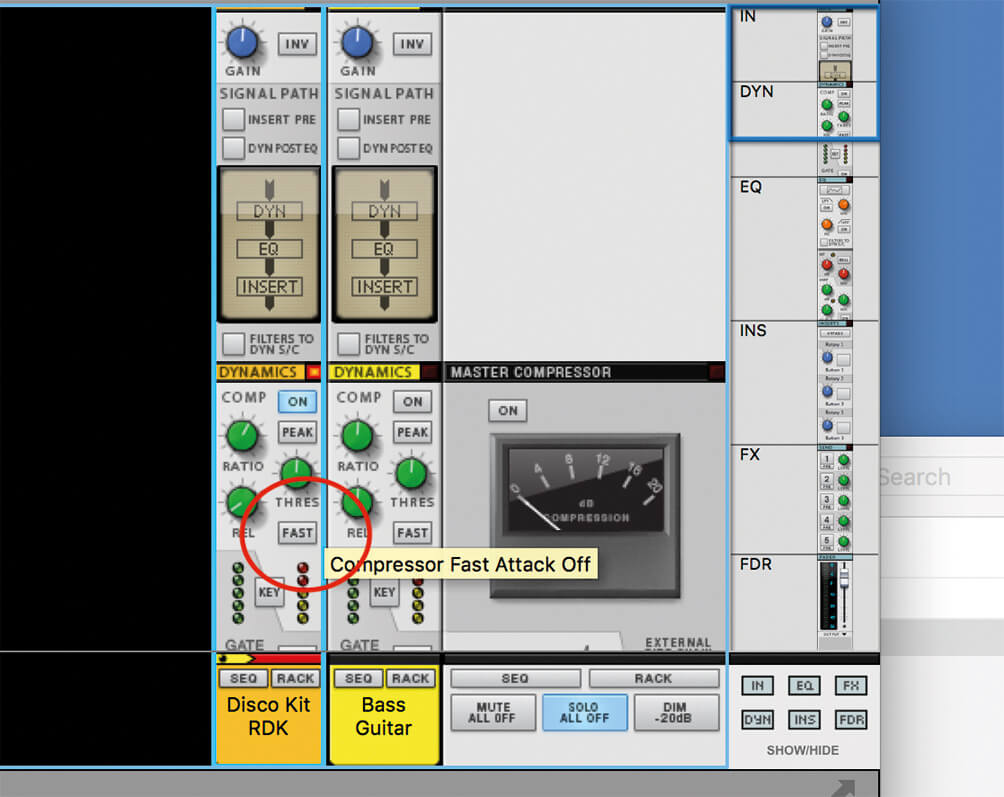 5. Whether you set your attack time fast or slow can depend on the type of kick you have. We’ve set ours up slow (by making sure the Fast blue icon is not lit) to retain its attack character. You can hear the difference by clicking ’Fast’. 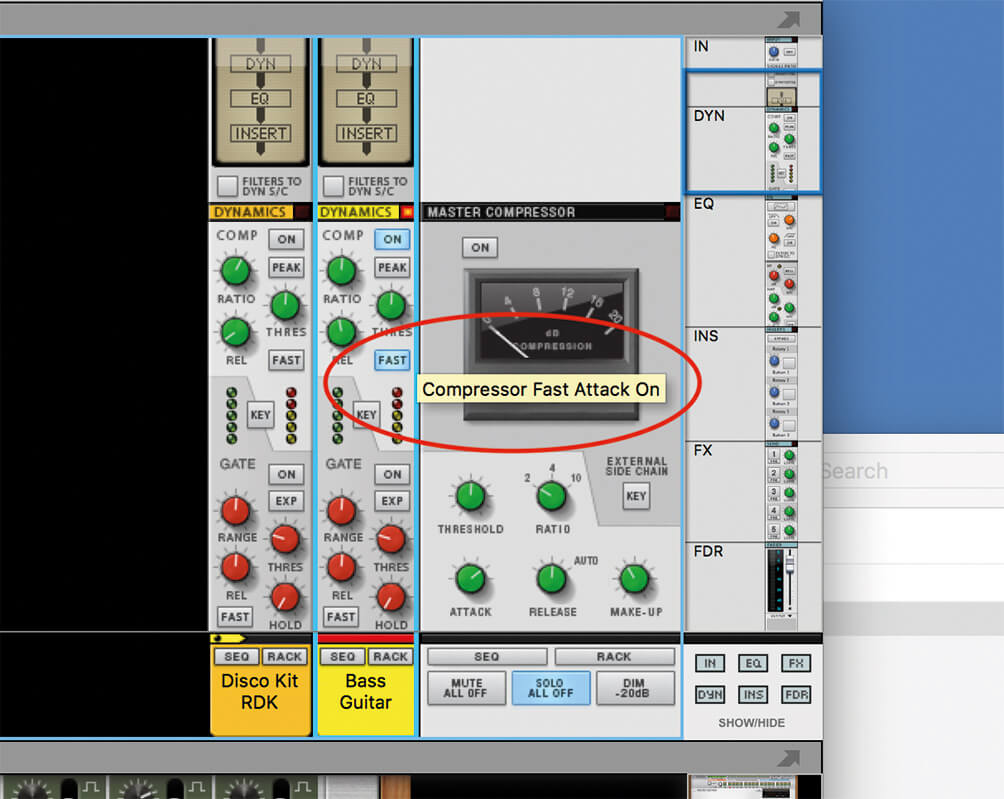 6. Now solo your bass sound and repeat the above steps, experimenting around the values we’ve suggested. We’ve made our attack time faster (by clicking Fast) as it sounds punchier that way. Again, it depends on the sound.

It’s all about the bass, right? Wrong! In our workshop, we make most of our attitude and punch in the upper- and lower-mid areas of our EQ. When we go into the low end and start boosting, we introduce mud to both kick and bass. It depends on the sound, but often ‘going low’ is a ‘no go’. 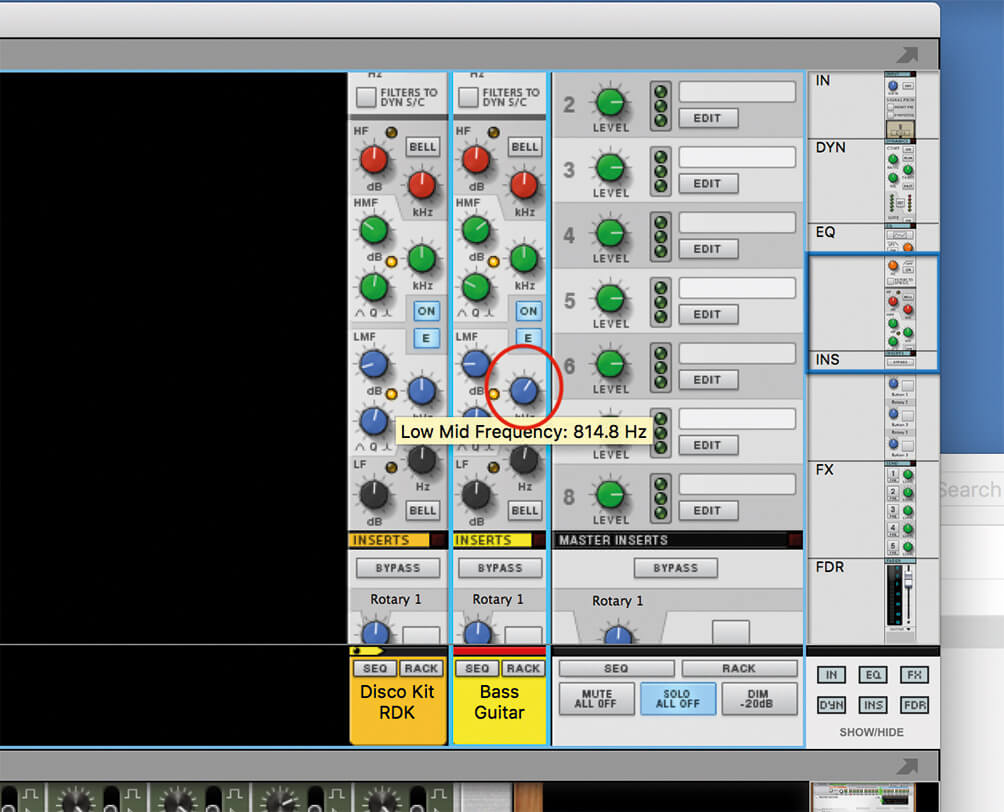 7. As we have the bass solo’d, we might as well now apply some EQ to that sound. Before we do that, let’s show you how you can change its character completely. Sweep through the low mids from 200Hz to 2kHz and hear it change. 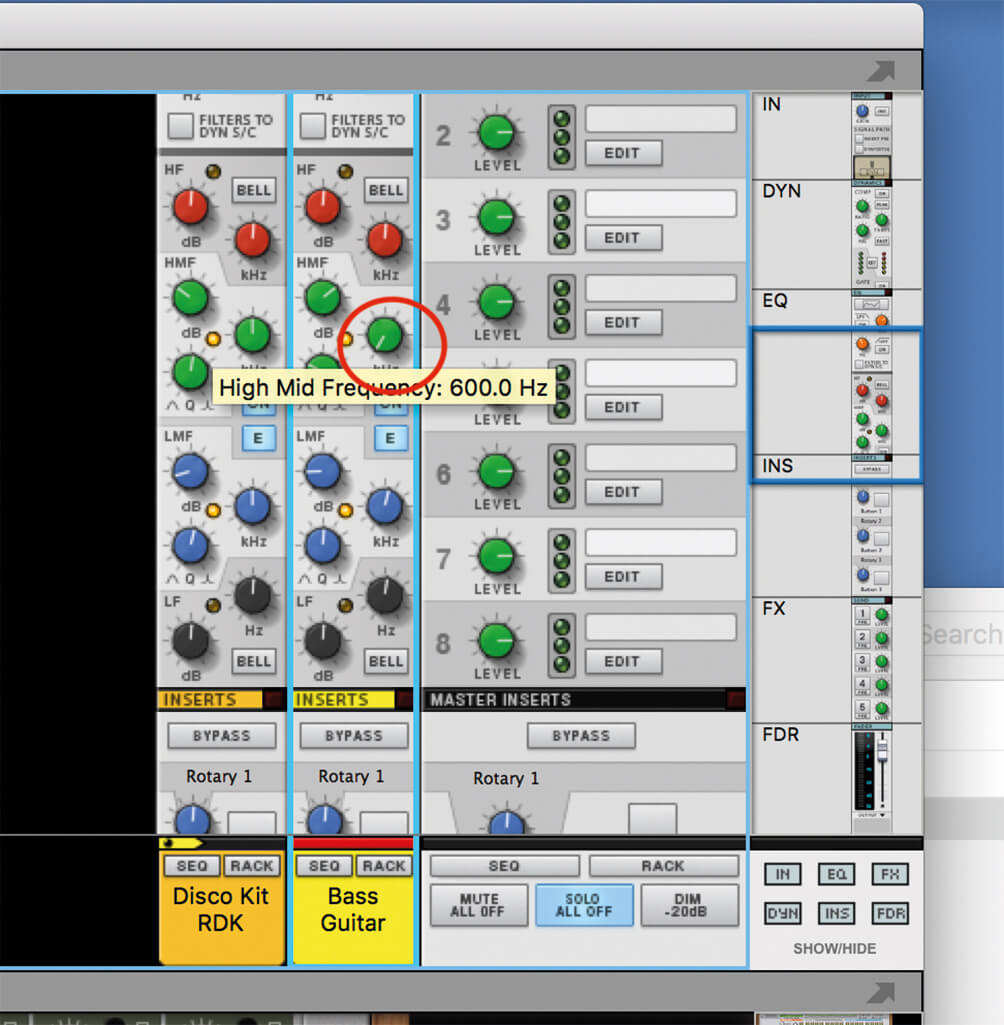 8. It’s changing the sound too much from the original so, in this case, you can achieve a subtler change in attitude rather than complete character by doing the same with the upper mids. Sweep through from 600Hz to 7kHz. 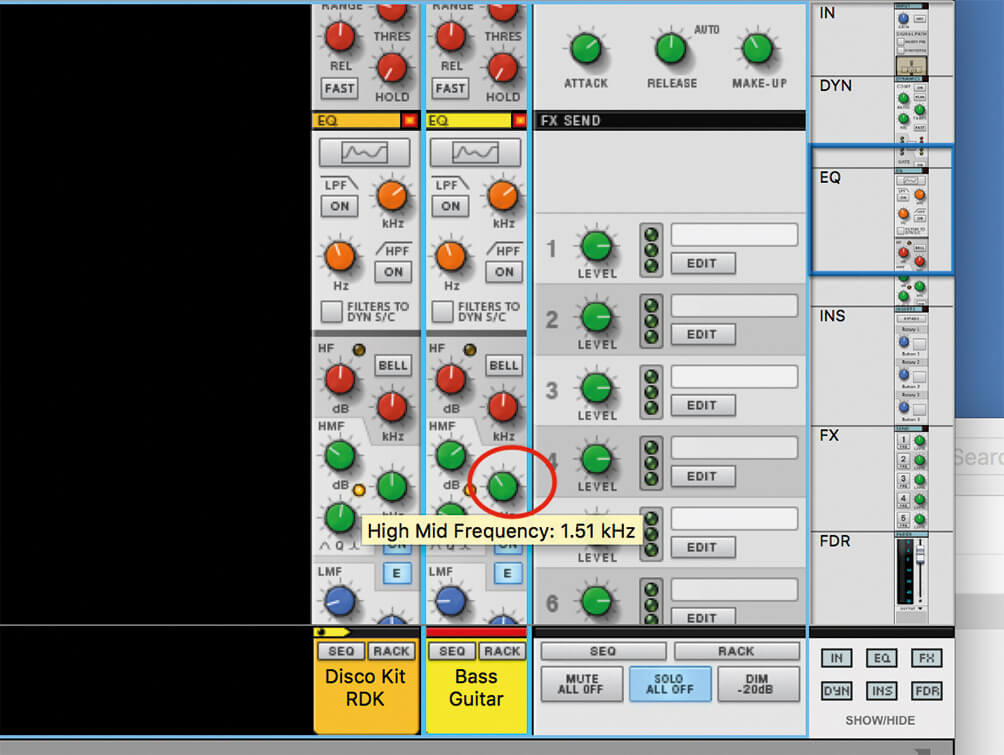 9. Again, it will depend on your sound and how much you want to change it from the original, but we’ve settled on around 1.5kHz with ours and now you can boost or cut it with the dB dial to taste. 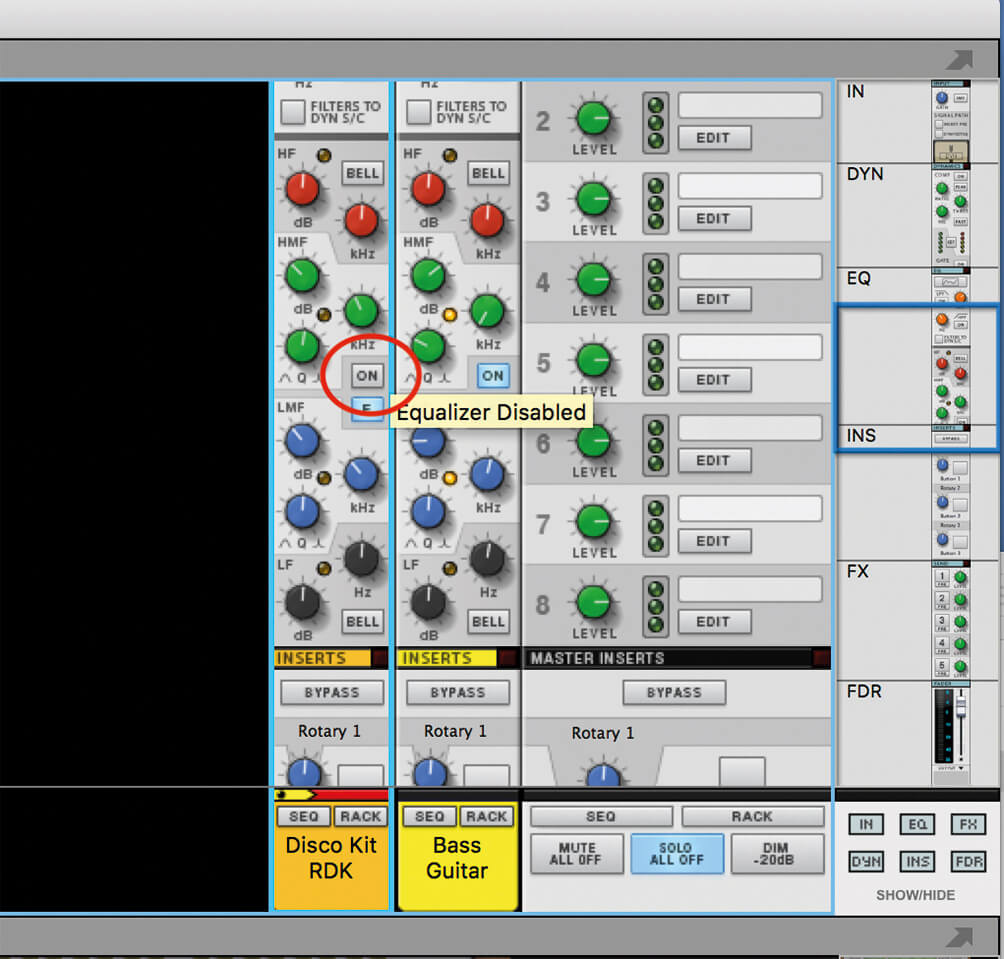 10. Now solo the kick sound. A combo of the upper and lower mids might be needed here, so make sure you understand that switching off will disable its effect. As there is crossover of the two, sometimes it’s best to just use either. 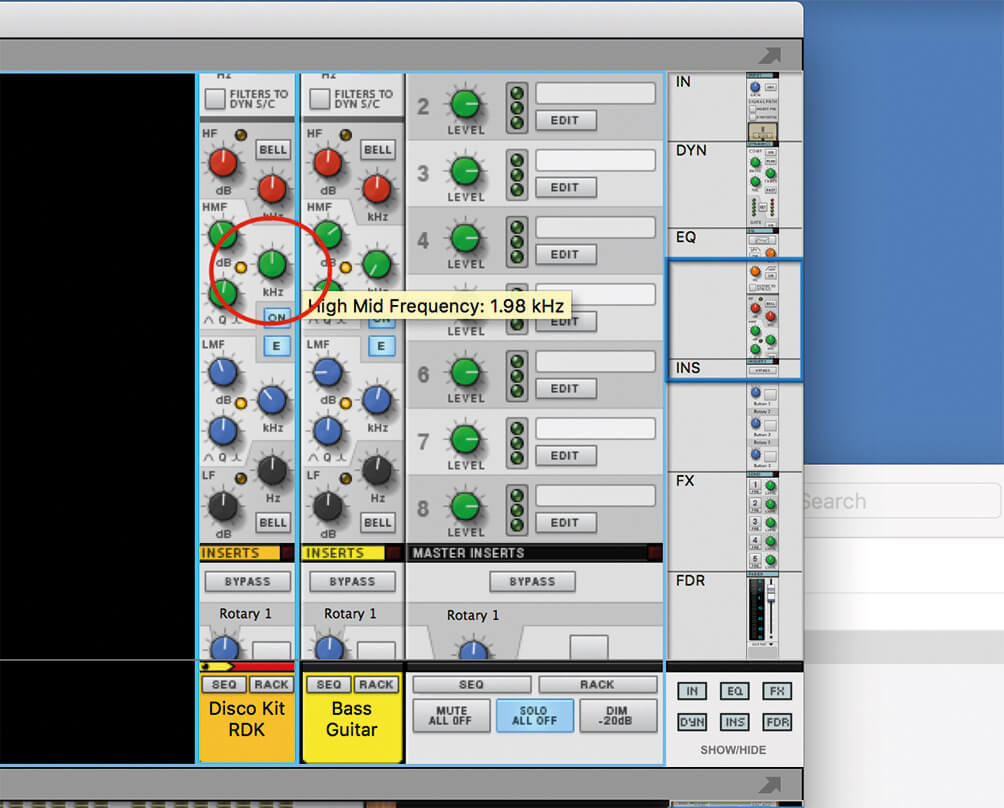 11. Experiment using both upper and lower. If it sounds good, it is good! We found that boosting at around 2kHz for our kick gave it some nice attack and much more attitude. 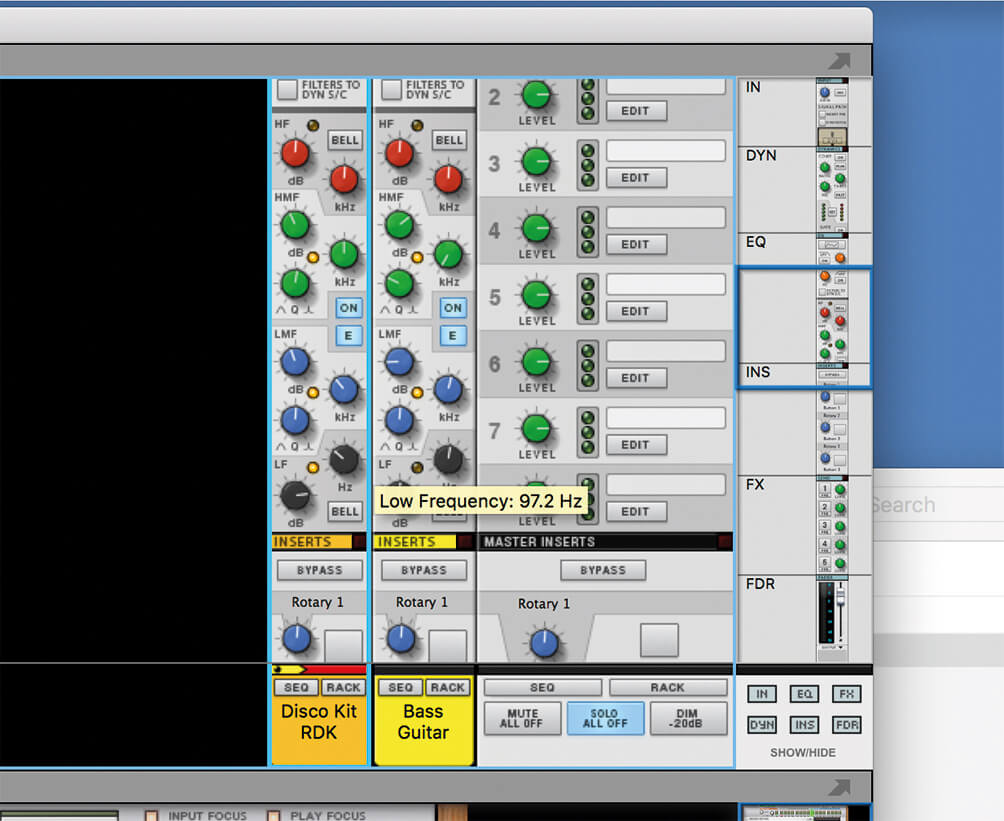 12. Now we’ll demonstrate that boosting the very low end of a kick or bass isn’t necessarily a good idea. Here, we’ve boosted the low end of the kick. At best, it sounds muddy, at worst, distorted.

Seeing is believing We always say you should use your ears when mixing and what we’re about to say isn’t contradicting that… much. For the subtleties of mixing, you need all the help you can get so, as below, when there are two sounds clashing, use an Analyser to spot the issue in an instant! 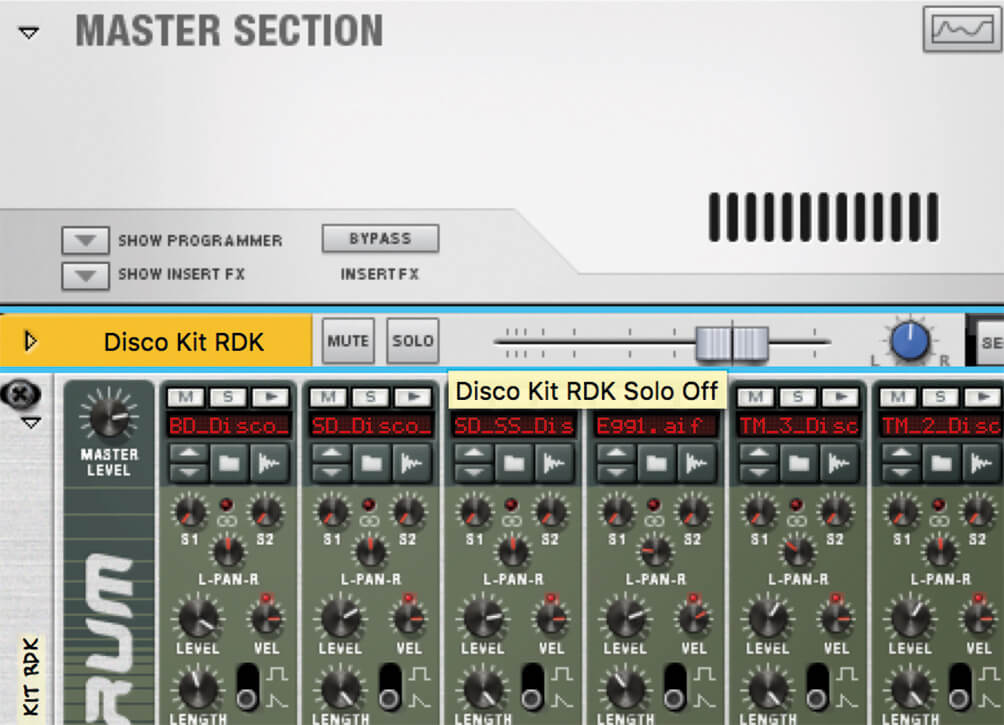 13. In the real world, you’d be constantly comparing what you are doing on one sound against the other. For our purposes, we haven’t, but now let’s take the kick off solo and compare it to the bass. They sound pretty good… 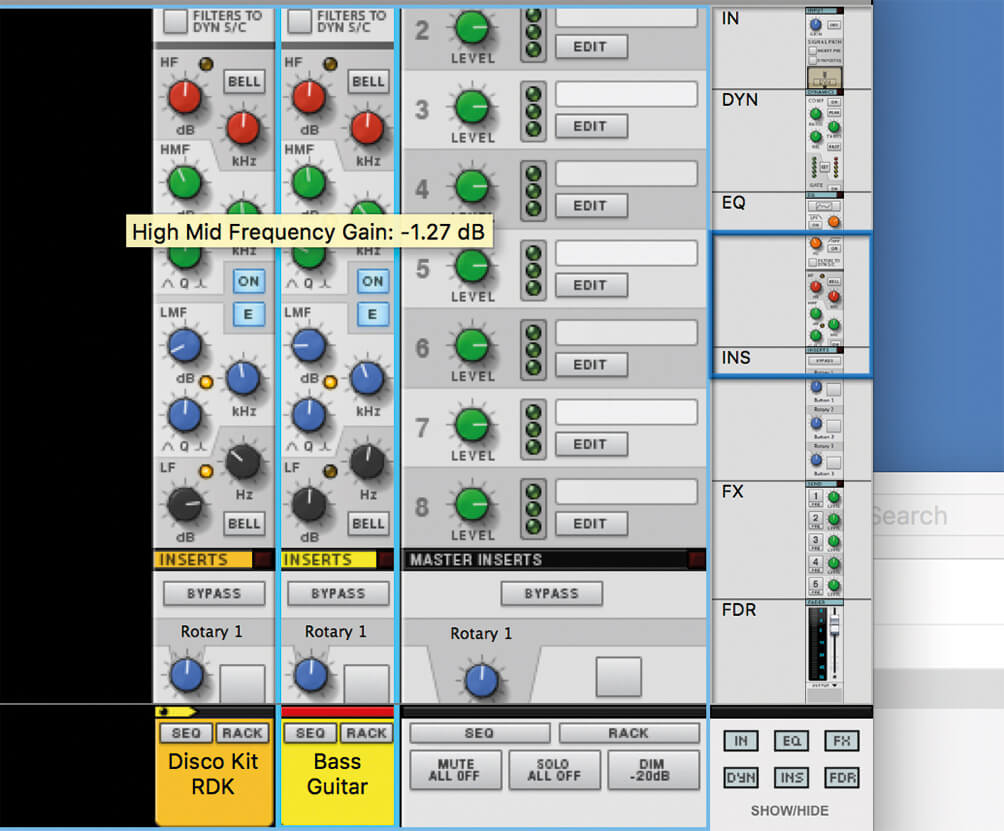 14. However, there’s a good chance that your kick and bass will clash if you’ve messed with similar frequencies when trying to give either or both some attitude. Here, we’ve adjusted them back so they do clash! 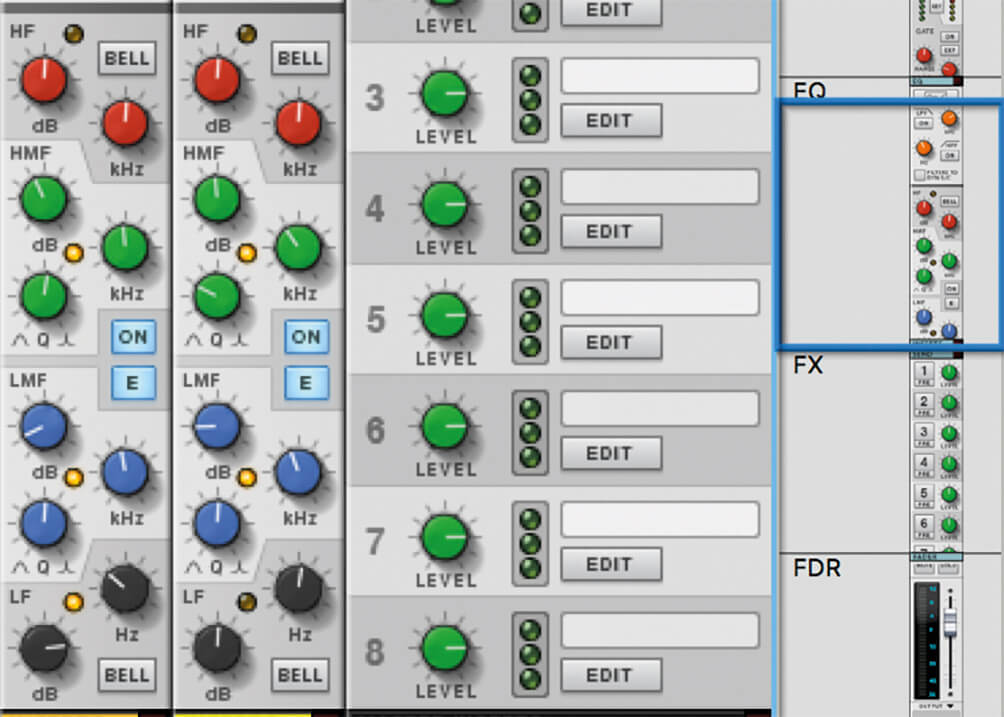 15. You could, of course, simply adjust the various frequency pots on either EQ to move the two sounds away from each other. However, that can be fiddly, as you might end up having to adjust several at the same time. 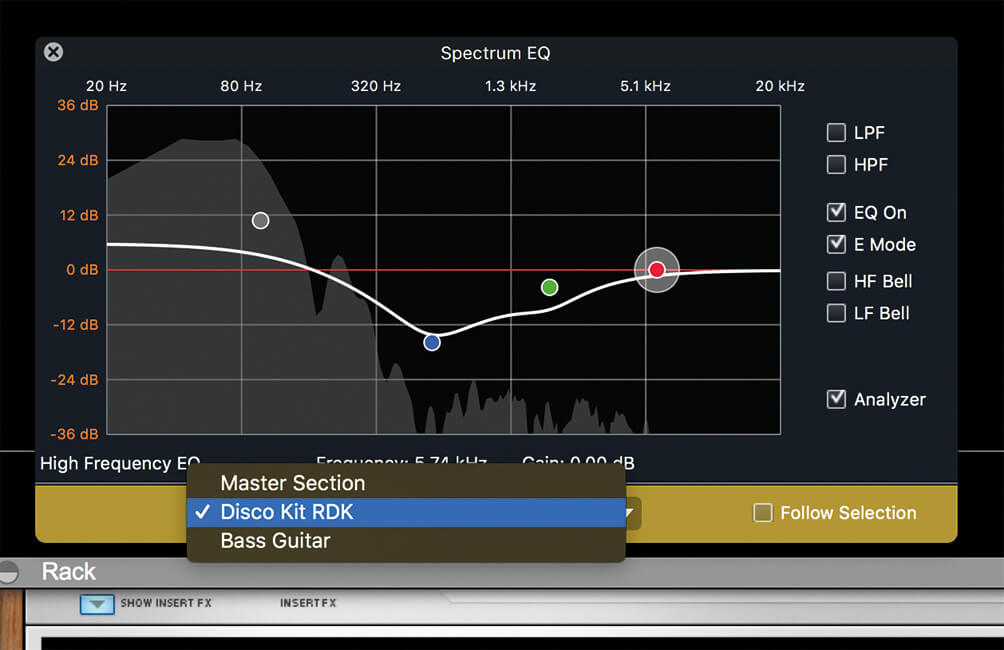 16. Instead, click the EQ ’Show in Spectrum EQ Window’ on either. This lets you see the frequency spectrums that either sound is playing within. To change the sound from kick to bass, use the drop-down menu as shown. 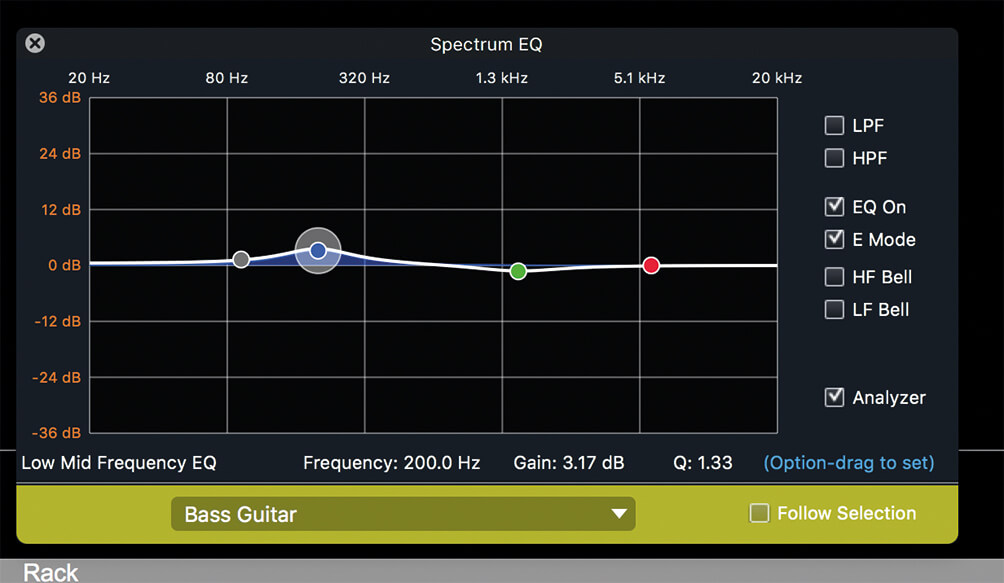 17. We can see both are clashing at around 200Hz so, to separate them, we’ll introduce a slight boost in this area for the bass-guitar sound. It already sounds better… 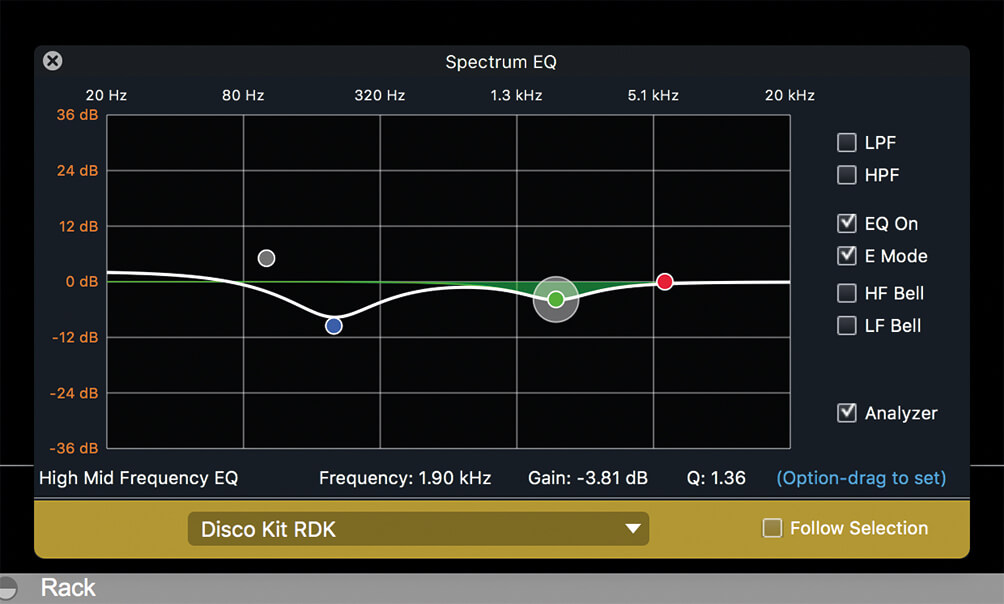 18. If you feel you need to – and you may not – then introduce an opposing EQ curve to the kick. Now, the two sounds are definitely separated, but (hopefully) still have that attitude.