Put a cassette in the boombox and some Aquanet in your hair and let’s retrofy your productions. 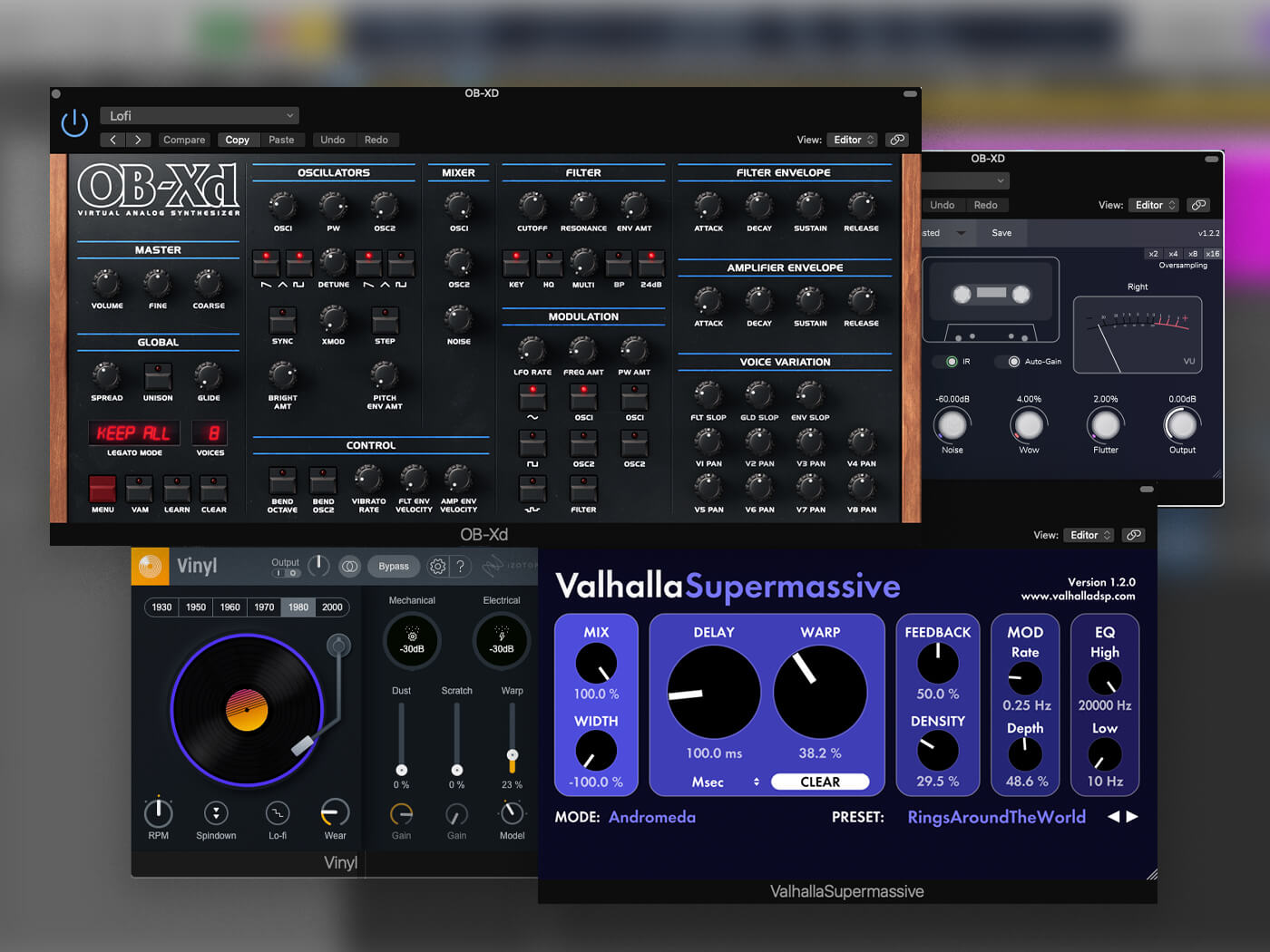 Genres like synthwave and retrowave re-imagine the 80s through a haze of woozy nostalgia. Think failing analogue synthesizers, VHS players with broken tracking, and cassettes that have been dubbed over one too many times. But how do you go about achieving this mix of grit, lo-fi and warble? There are plenty of excellent plugins like XLN Audio’s RC-20 Retro Color that are designed as a one-stop retrofying shop, but you can also achieve similar results with freeware plug-ins.

In this tutorial, we’ll show you how to create texture-rich tones that are perfect for use in any retro-style electronic genre, like this:

Let’s start with the synthesizer. Although these processing tricks will work on any sound, it helps to program some retro feel at the source. We’ll be using DiscoDSP’s excellent freeware OB-Xd synthesizer, an emulation of the famous Oberheim OB-X, to get that long-lost 80s feel. While it is freeware, we do encourage you to support DiscoDSP if you can afford to.

We start with the Chariots VG Harp OB-Xd preset, which was clearly inspired by Vangelis’ soundtrack work on Chariots Of Fire. While this is a lovely sound in itself, it doesn’t inspire deep nostalgia. Let’s change some parameters to give it an old, unstable feel.

Start by bringing the filter resonance down just a bit to take the bite off and open the filter cutoff just a touch. Next, in the Modulation section, deselect the PW (pulse width) amount button for OSC1 and instead, turn on the frequency amount. This will have the LFO affect the pitch of OSC1, destabilising the sound. Slow the LFO rate right down and raise the frequency amount just a bit. Now there’s a lovely, slow pitch drift.

The Voice Variation is our next stop. Raise the amounts for the Filter Slop and Envelope Slop. This ‘ages’ the synth, injecting instability into the circuit. It’s just the kind of thing we’re after.

iZotope’s freeware Vinyl plug-in is a classic for wrapping your sound in analogue nostalgia. It’s recently been updated and is better than ever. Create an instance of it on your synthesizer channel.

We’re after more of a VHS feel than a vinyl one, so we can turn off the crackles right away. Lower the Dust amount to 0 to achieve this. Our aesthetic is also 1980s, so hit that 1980 button at the top. Lastly, increase the Wear amount to taste. This will roll off the highs for a warmer feel. Keep in mind we’ll be adding more vintage vibe with the next plug-in, so don’t feel like you have to go overboard with this.

When that’s sounding sufficiently vibey, try some of the different Models. This controls the shape of the Warp, which we can leave as is. In this instance, we’ve chosen Inv. Sin.

Our synth sound is pretty warped but it’s still fairly hi-fi. Let’s use cassette emulation to further degrade the sound.

Call up Caelum Audio’s Tape Cassette 2. This simulates the lo-fi feel of dubbing a sound onto cassette. The low-pass filter takes off the highs, emulating the way a cheap cassette can make it sound like there’s a pillow in front of the speaker. The default setting of 18000Hz is perfect. We could do with a bit of cassette-style saturation, through, so raise the Saturation amount to around 8.00dB.

Then, for a bit of extra warping, add a little wow and flutter. Adjust those amounts to taste.

It wouldn’t be an 80s throwback without huge digital reverbs, and Valhalla’s Super Massive is just the ticket. It combines reverb with delays and feedback for vast spatial effects. It’s flabbergasting that this plug-in is free. Let’s put an instance on a new bus (aux) so we can do some further processing later.

Start by calling up the RingsAroundTheWorld preset in the SFX/Quasars section. That sounds incredible just like that. Be sure to increase the Mix amount to 100%, as we’re using it on a aux send effect, not as an insert effect. You can adjust the send amount on the mixer channel for even bigger reverbs.

This sound is getting close, but we need to add some rhythmic motion to our reverb. We’re going to add drums later and we want the reverb to pump in time to the beat. We can use a compressor to make this happen.

In the same auxiliary send channel as the reverb, add an instance of Audio Damage’s Roughrider 3. Roughrider is a top-notch freeware compressor that’s perfect for adding a heavy-handed, and much-needed, dose of character.

Start with the Heavy Duty preset to hear what Roughrider 3 is capable of. Bring the Mix up to 100%. You can immediately hear how the compressor has exaggerated the effect of the reverb. We’re loving this but it’s not particularly rhythmic. Using the sidechain will fix that.

Under the Sidechain drop-down, select a track with a heavy transient, such as a kick channel. Next, turn on the external Sidechain. You should now hear the reverb pumping in time to the rhythm. It can sound pretty brutal so let’s smooth this out. Bring the ratio down to a less drastic 2:1.

Finally, shape the curve of the compression response with the attack and release controls. Play around with them until you get a rhythmic flow. We settled on an attack of 46ms and a release of 161ms.

Finally, we add a bassline courtesy of Dexed and drums from BVKER’s excellent (and free) vaporwave drum kit, Aesthetic. Here’s the result

Share your creations and tell us what other tutorials you’d like to see in the MusicTech Creator Community.