Learn how to use dynamic EQ for deeper control over problem frequencies. 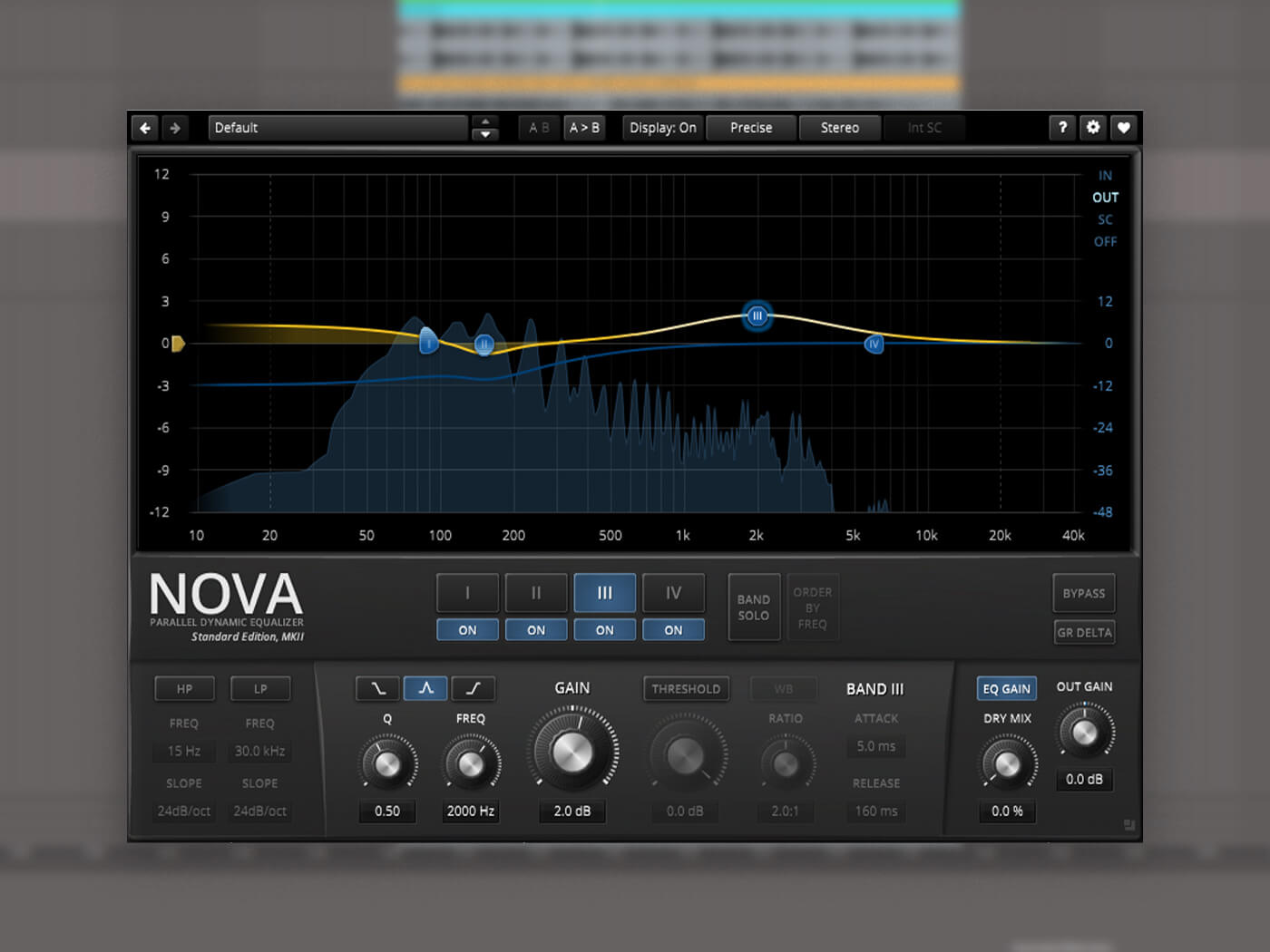 Whatever you’re doing in the studio, EQ is likely one of your most-used tools. Whether carving out unwanted frequencies en-masse, making surgical cuts on individual sources or sweetening a whole mix, EQ is a producer’s bread and butter.

However, there are often issues that a traditional EQ can’t solve due to its static nature. One example is EQ-ing a sampled breakbeat. While a big, low-mid cut might help rein in a boxy tom fill, it’ll also take low mids away from the rest of the break, which doesn’t need EQ-ing.

While it’s possible to automate your EQ as the track unfolds, it’s often easier to instead use dynamic EQ to do the same job. This type of EQ has bands you can programme to react to specific frequencies using similar controls to a compressor. To help you get to grips with the power of this type of processor, we’ll show you how to use dynamic EQ to solve some common issues.

First, install Tokyo Dawn Records’ Nova, a fantastic, freeware dynamic EQ for both Mac and PC that offers everything you need to get under the skin of our sounds, in a way that’s very difficult using conventional EQ-ing techniques.

We’ll start by using a well-targeted dynamic EQ band to tidy up a live drum recording. While the natural differences in playing dynamics and style give a live drum take its unique character, it can make it more challenging to get a consistent sound when mixing the drums later on. 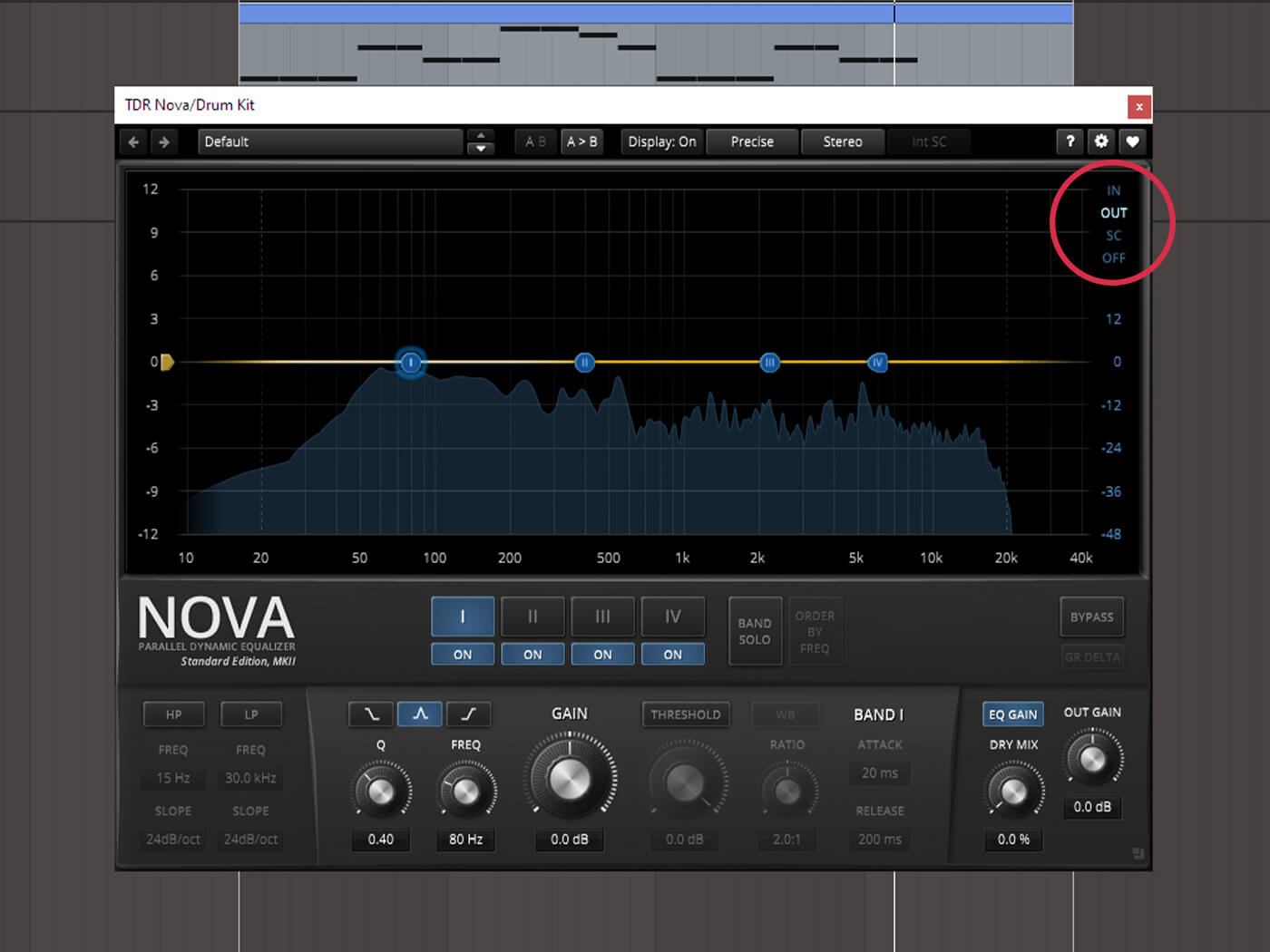 In the dry drum recording, you’ll hear that the first snare played in every bar has been hit differently to the following ones, creating excessive resonance at around 200Hz. This makes the entire drum recording sound uneven and clunky. Suppose it was a simple matter of the one snare hit being louder than the others. In that case, we could apply a little compression or make a minor edit to even things out, but this won’t remove the excessive frequency build-up, only reduce the dynamic range.

So, to fix this, we’ve loaded Nova onto the drum stem, and enabled band 1. Hitting the Out button (top right) enables the onboard spectrum analysis, showing the frequency spectrum of the signal after processing and allowing us to see where the problem frequency is, as well as hearing it.

We’ve set the EQ type to a bell curve and frequency to 218Hz, with the Q at 3 to precisely hone in on the problem area without affecting the frequencies around it. After this, we set the threshold to -2dB, with the ratio dialled in at 6:1. This means the level of our rogue frequency will only rise by 1dB for every 6dB it exceeds the threshold by. Using a high ratio and low threshold setting makes Nova’s internal sidechain highly sensitive to resonant frequencies that exceed the threshold, without really having much effect when the threshold isn’t breached significantly. 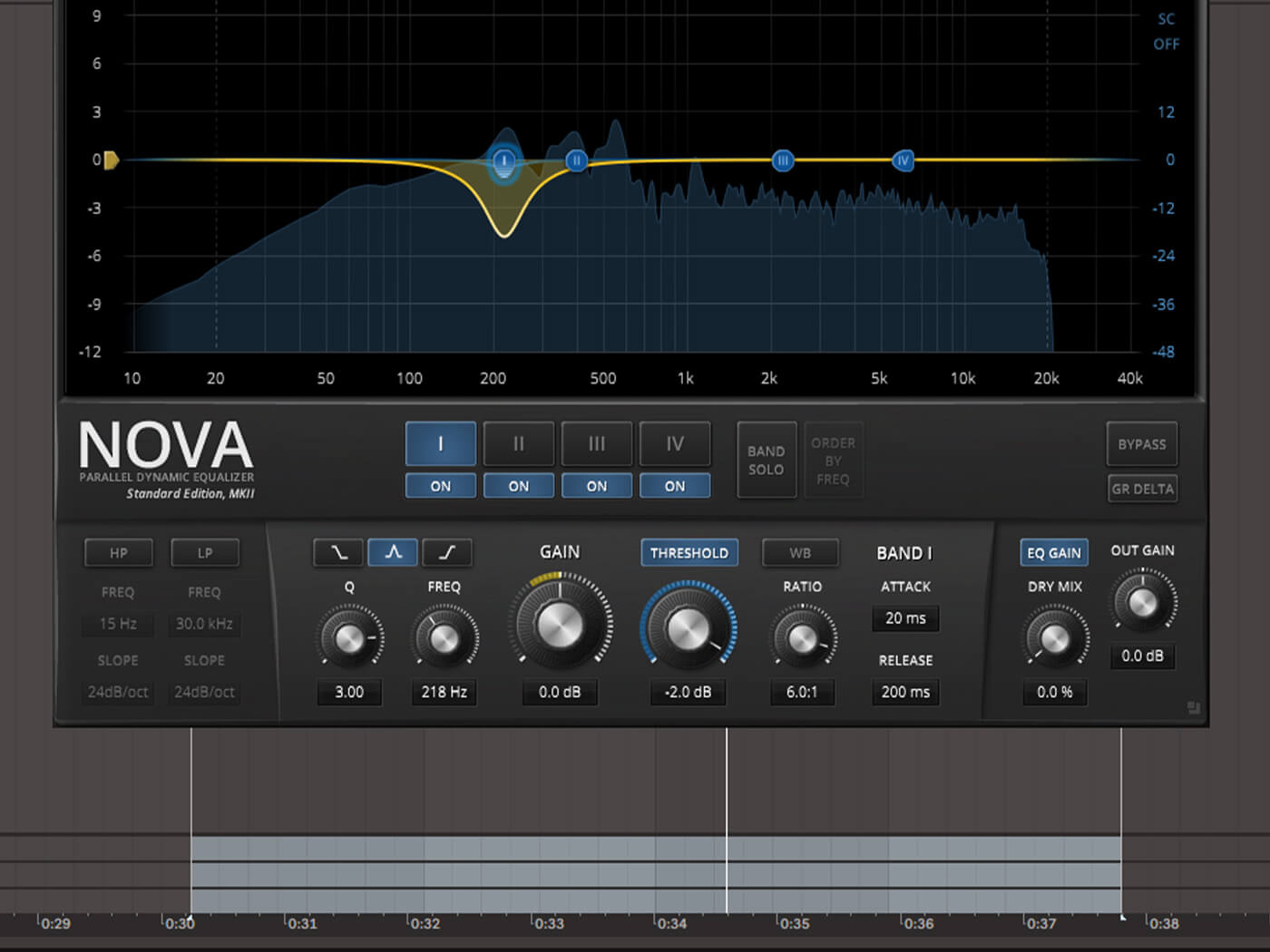 With the dynamic EQ enabled, you can hear that the drums sound much more even than before. The excessive frequency build up you can hear in the unprocessed drum take is hardly noticeable now, and there’s barely any effect on the other parts of the drums that sit in that frequency area.

Many producers and engineers find it challenging to make vocal takes sound bright and detailed, but without the sibilance ending up being ear-shredding or unpleasant in any way. One method that can work well is to apply a high shelf EQ boost with a de-esser placed afterwards to catch any excessive sibilants. We can do a similar job using one high-shelf band in Nova, saving on processing power and giving increased clarity compared to using two distinct processors to do the same job.

The vocal take we’ve used is naturally quite dull, so we could do with brightening it up somewhat. So, we’ve added Nova to the vocal channel, with band four enabled and set to a high shelf. We’ve set the shelf frequency to 3kHz, with a wide Q of 0.4, then applied a 15dB boost. While this sounds a bit extreme, the vocal was severely lacking high-frequency energy, so it needed a significant boost to add a good amount of presence. 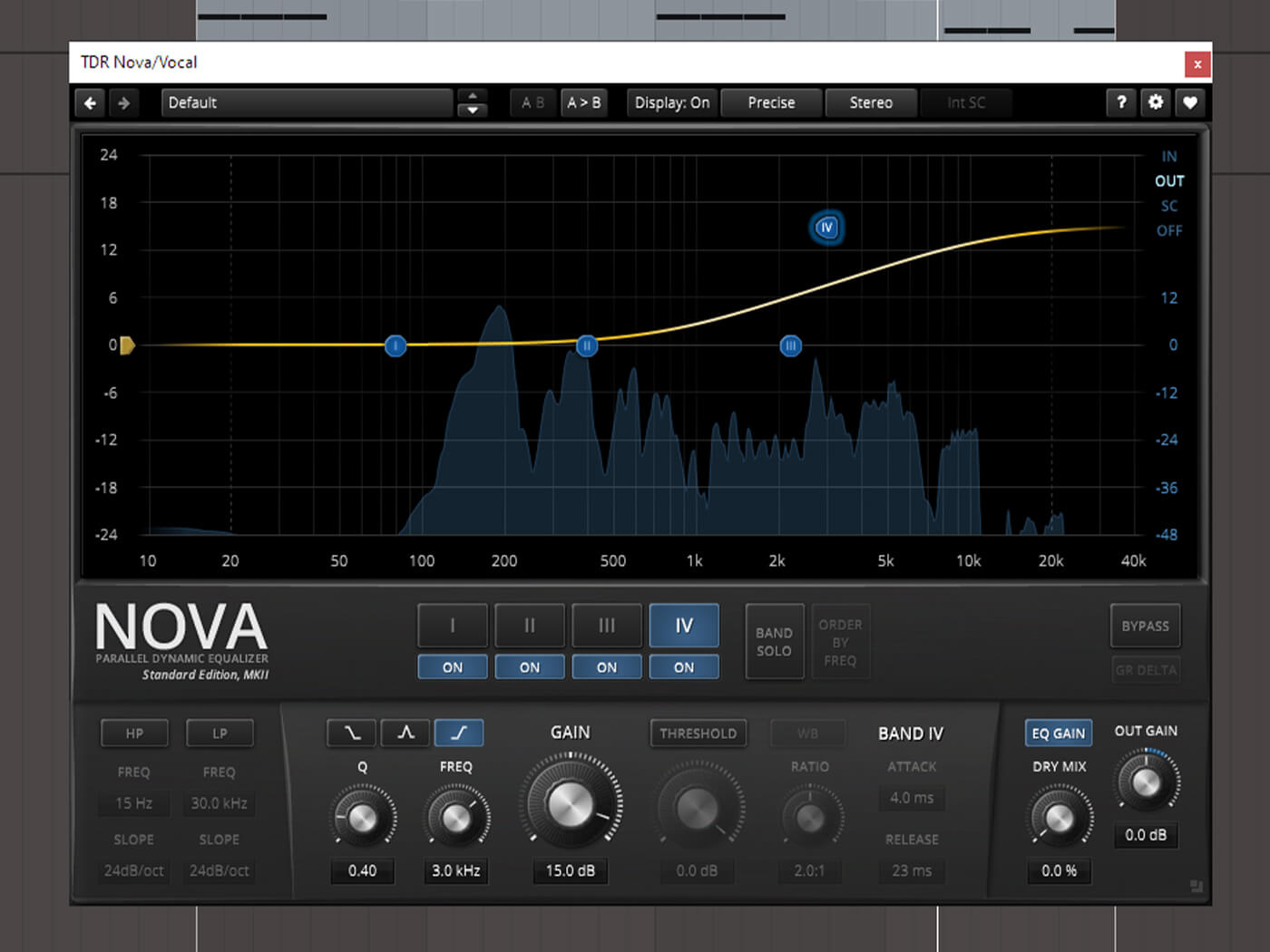 Now we’ve applied the boost, the sibilance buried in the vocal take is really obvious, and could be distracting when the track is played loudly. To fix this, we’ve set the threshold to -17dB, and ratio to 8:1, so that the dynamic EQ clamps down on the overly sibilant frequencies only when needed. Reducing the attack to 0.1ms, and release to 15ms makes the processing react more quickly, taming the sibilance without making the rest of the vocal take duller than it needs to be. 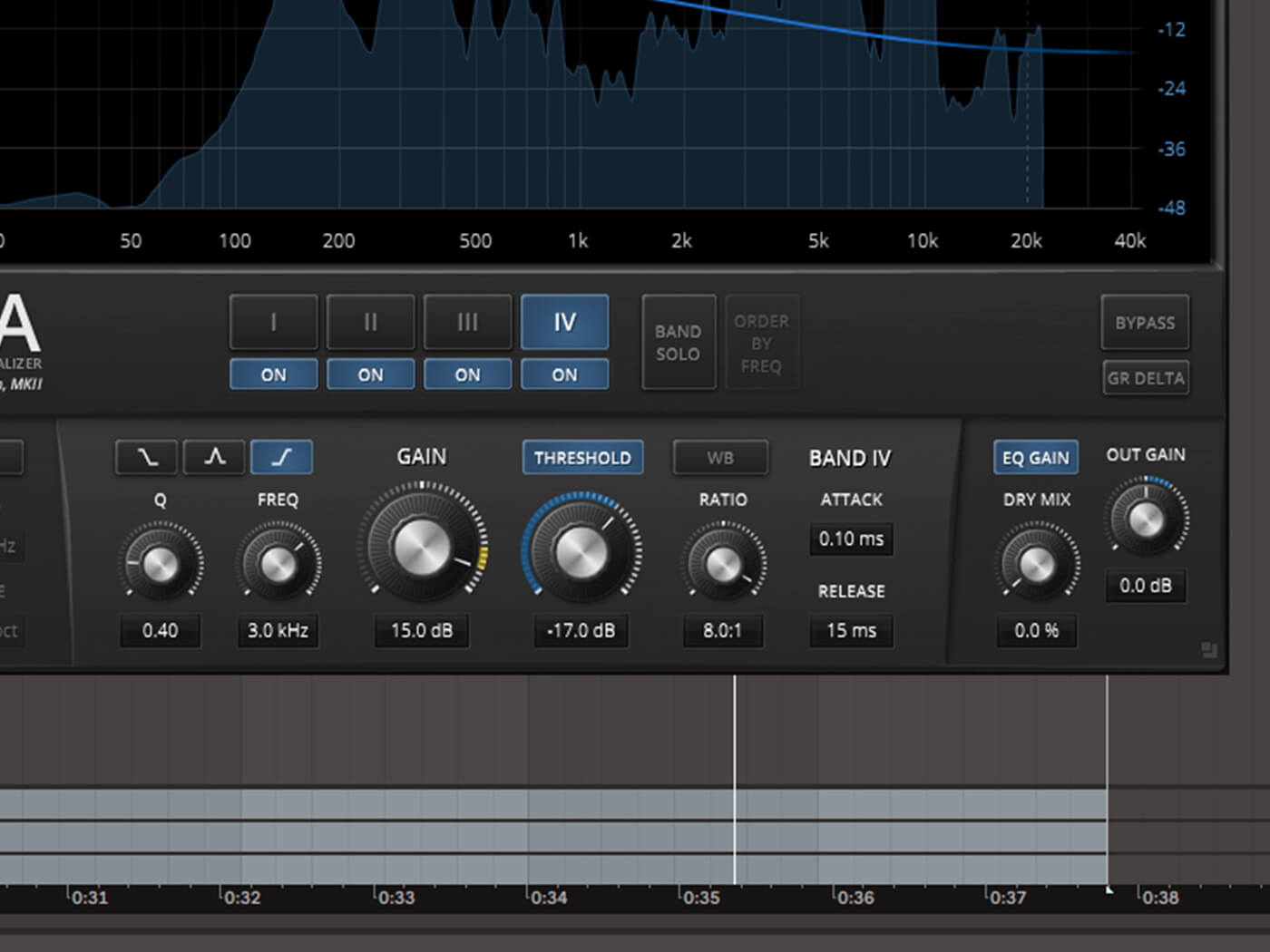 As we’ve boosted using a high shelf, which affects all the frequencies above 3kHz, it’s good practice to add a low-pass filter at 15kHz to roll off the ultra-high frequencies, making our dynamic EQ boost more focused and less shrill. 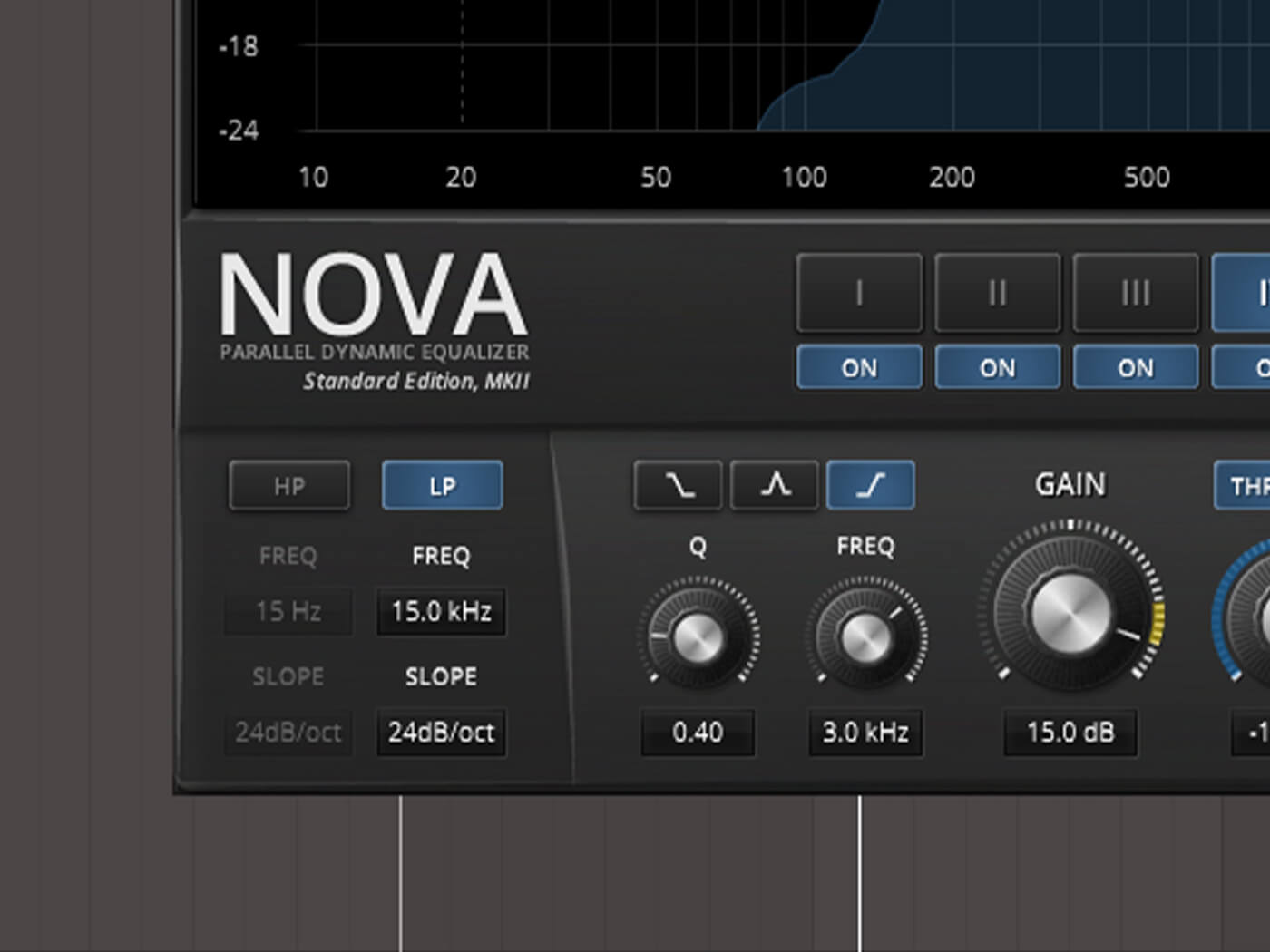 One of the best things about using dynamic EQ is that it reacts intelligently to the source material you run through it according to the parameters you set, which makes it ideal for processing signals such as live instruments and vocals, which feature a lot of complex harmonics.

We’ve got a bass guitar loop in our track that’s very low-mid focused, with most of the energy at around 100-200Hz. This sounds cool in isolation but lacks power and depth as part of the full mix. We can use Nova to pull down the higher notes, while boosting the sub frequencies when the lower notes play. This gives our bass guitar lick more low-frequency weight while controlling the frequencies already mentioned without making the bass sound hollow. 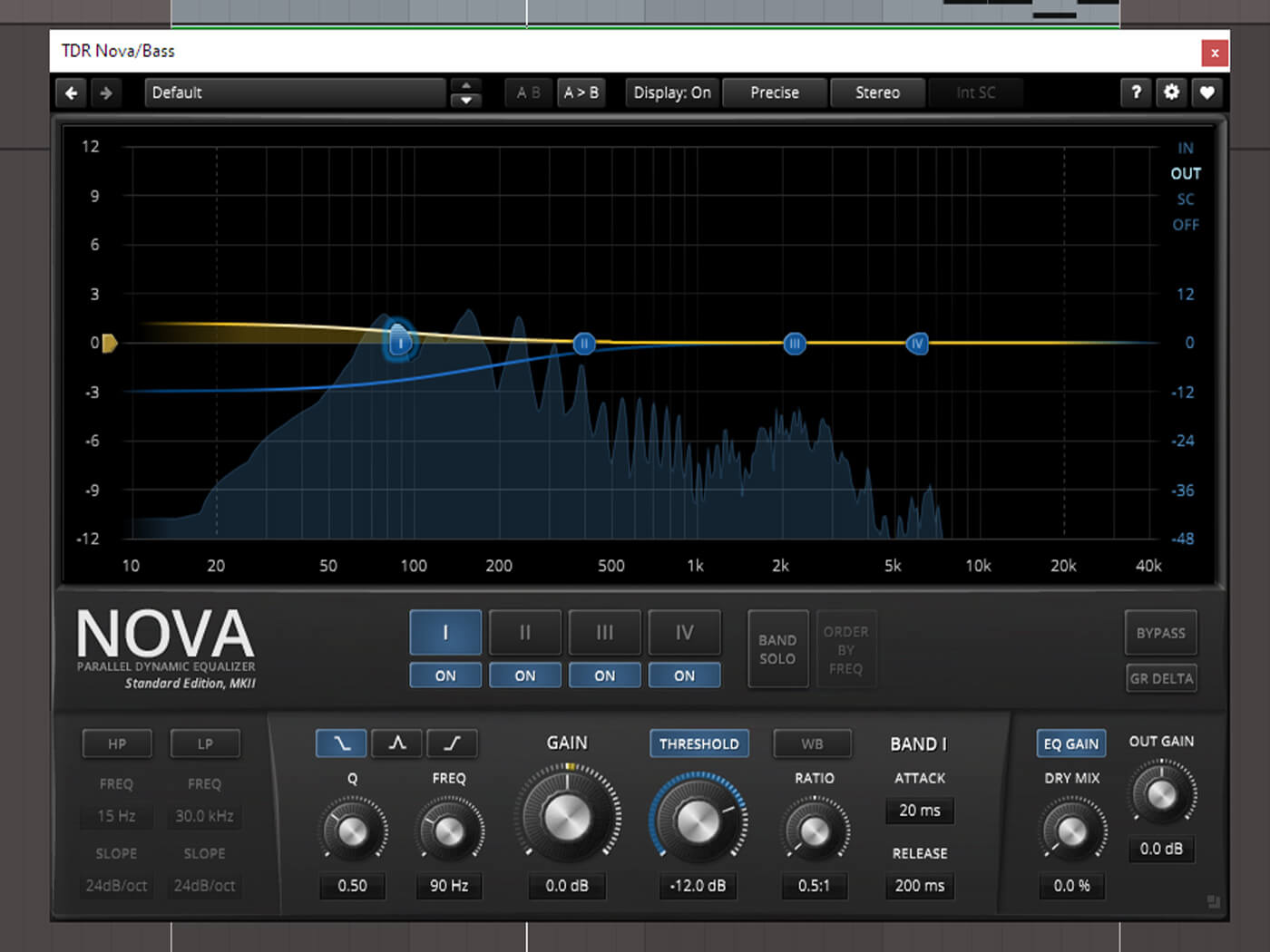 We started by setting band 1 to a low shelf, with the frequency at 90Hz. A gentle Q setting of 0.5 makes the shelf less pronounced, giving a more natural sound. Setting the ratio to a negative number makes the band boost dynamically, rather than cutting; we plumped for 0.5:1. Pulling the threshold down to -12dB gives a useful sub boost of around 3dB to the lowest notes, while hardly boosting the sub frequencies when the bass plays higher notes. 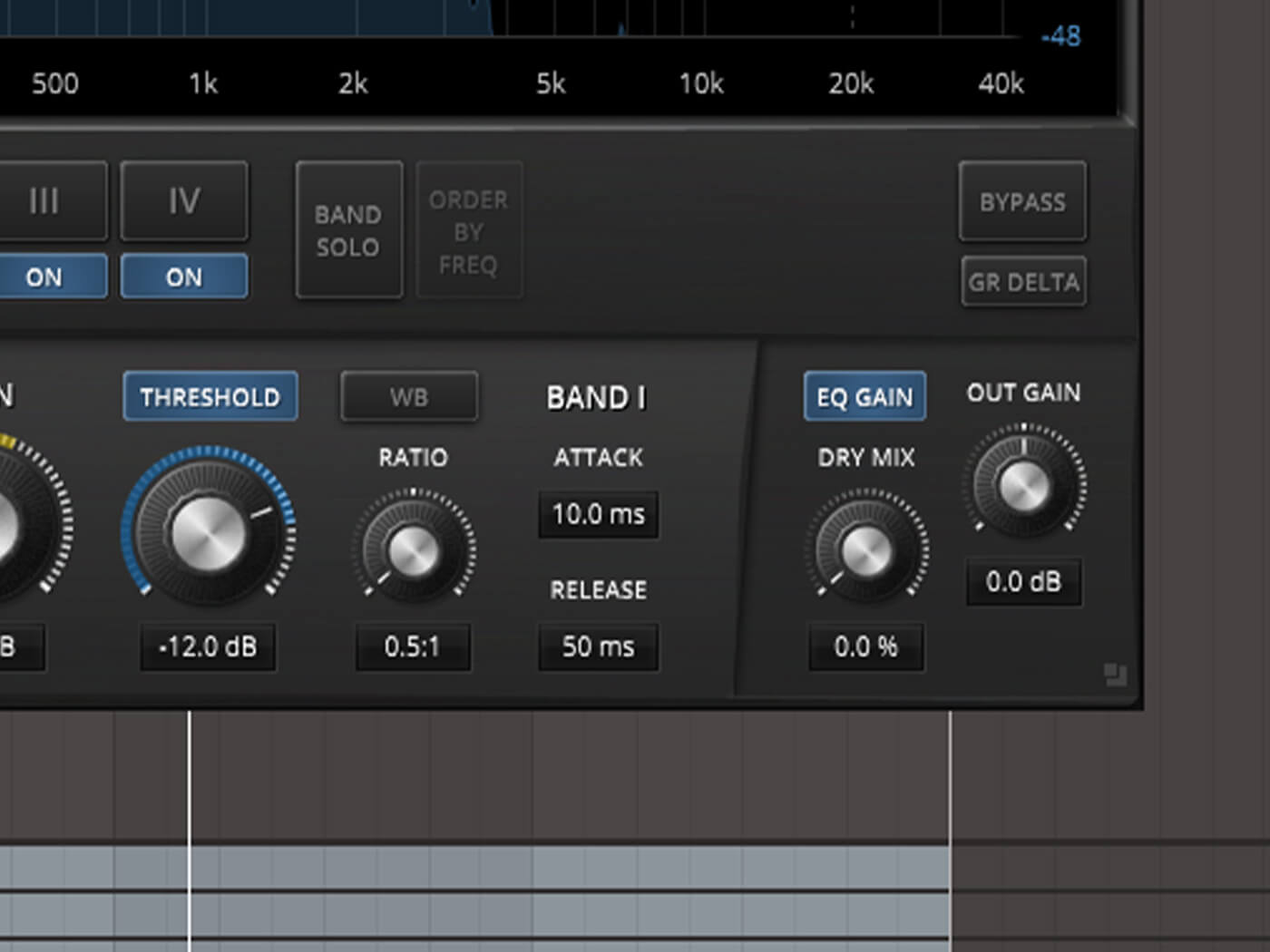 Next, we dial in a fast attack of 10ms, and release of 50ms so that the EQ band tracks the bass notes more naturally. While these kinds of fast attack/release times can induce distortion when using a multiband compressor on low frequencies, a dynamic EQ doesn’t suffer from the same issue. That’s because it’s using the internal sidechain signal to control an EQ band rather than a compression band.

Now we’ve added some extra weight to our bass, we can turn our attention to controlling the frequencies around 100-200Hz. We enable band 2, and set it to a bell curve. We’ve dialled in the frequency at 150Hz, which sits right in the centre of the problem area, with a relatively broad Q of 1.4, making sure that the band clamps down on the excessive frequency build-up in as natural a way as possible. 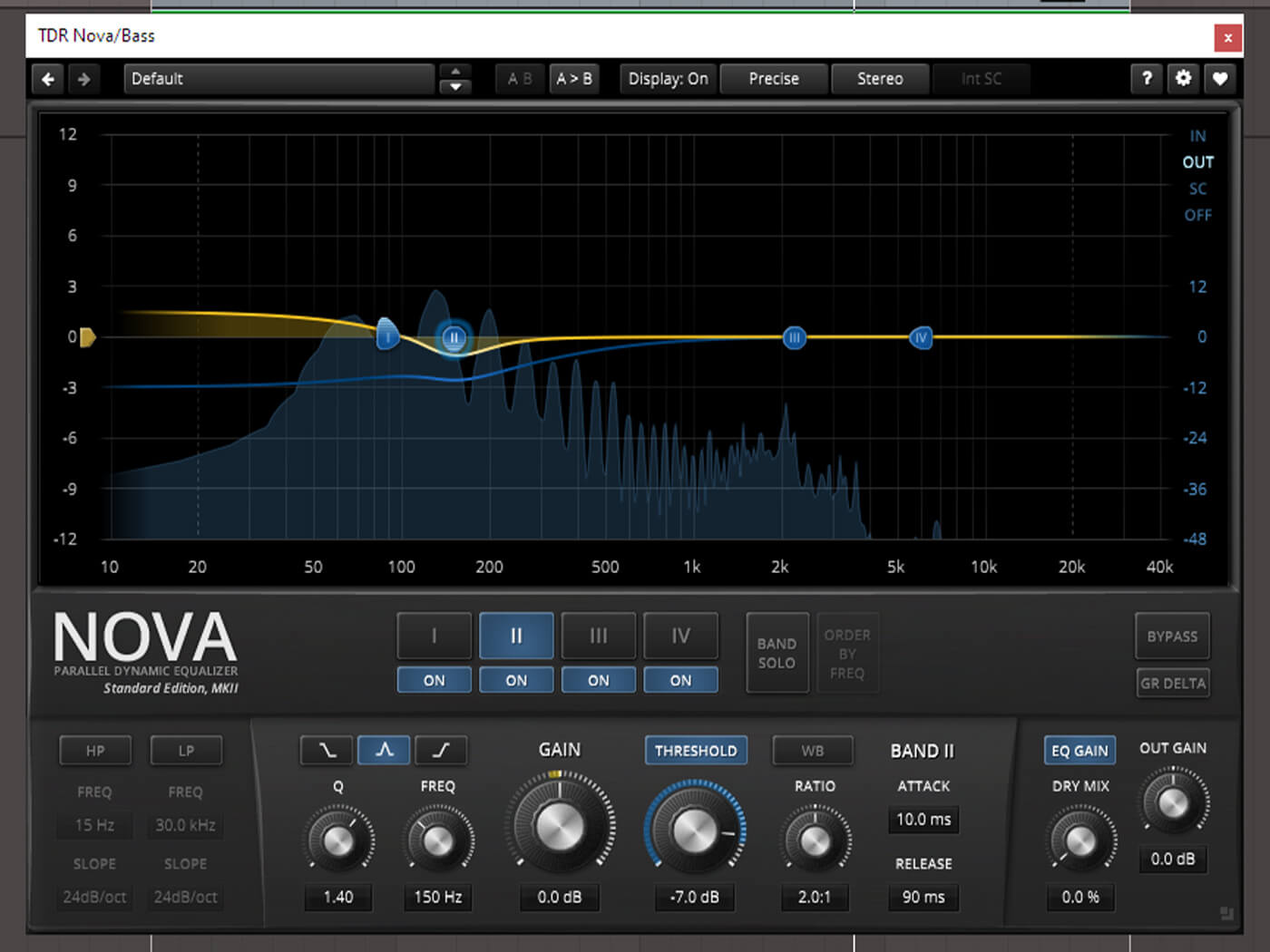 Pulling the threshold down to -7dB, with a ratio of 2:1 gives us around 2dB of gain reduction when the problem frequencies reach their loudest, making the bass take sound more even and less focused in this area than before. We’ve plumped for a fast 10ms attack, with 90ms release so that the EQ reacts promptly to the incoming signal without the processing sounding unnatural. 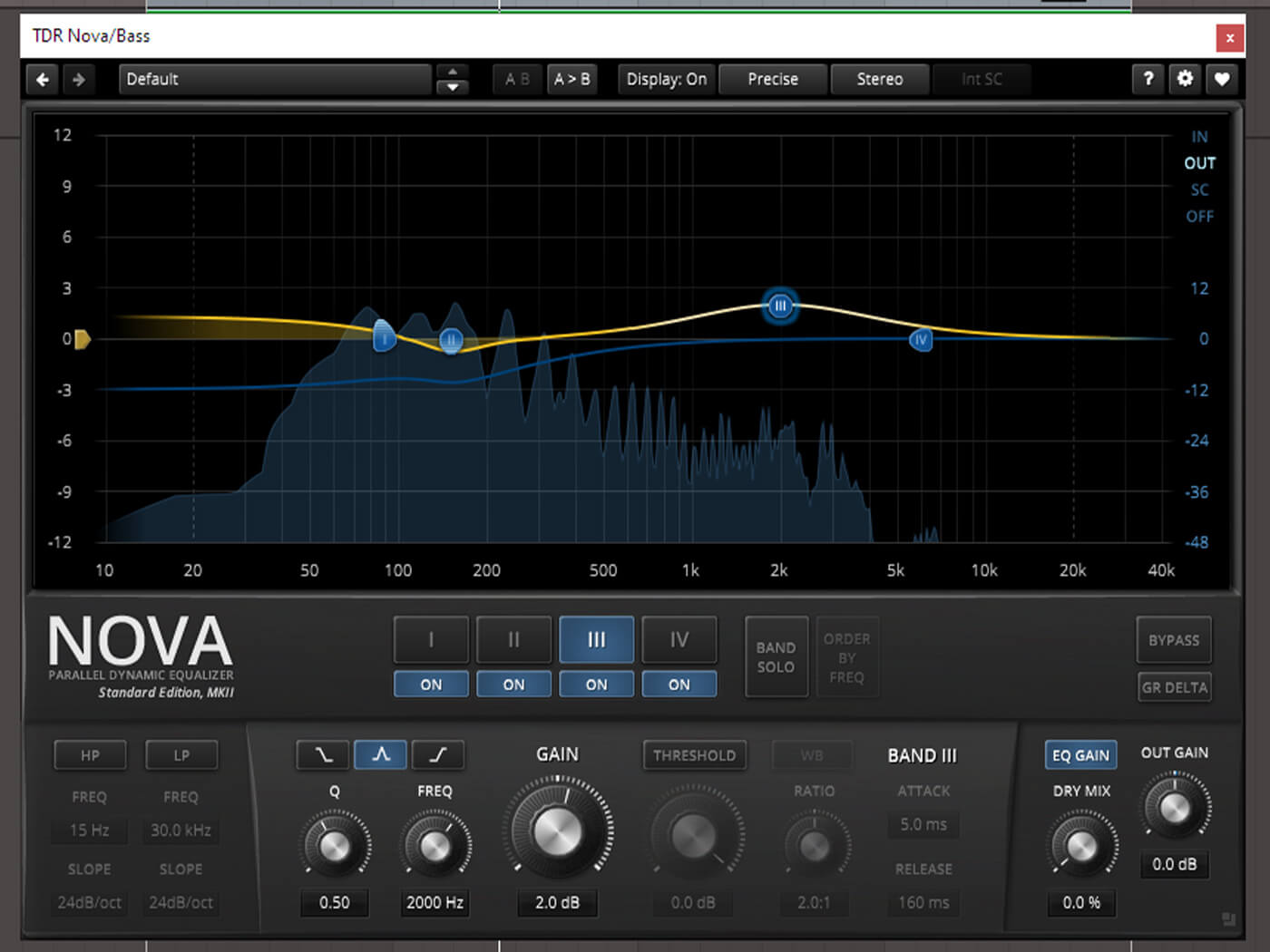 To finish off, we’ll use band 3 to add some mid-range presence to the bass when the lowest notes play, so that they’re more audible on smaller speakers. We’ve set up a bell curve boost at 2kHz, with a wide Q of 0.5. Adding 2dB of gain makes the upper harmonics of the bass cut through the mix more effectively. As a static boost, it also emphasises the higher notes, which naturally carry more harmonics anyway. 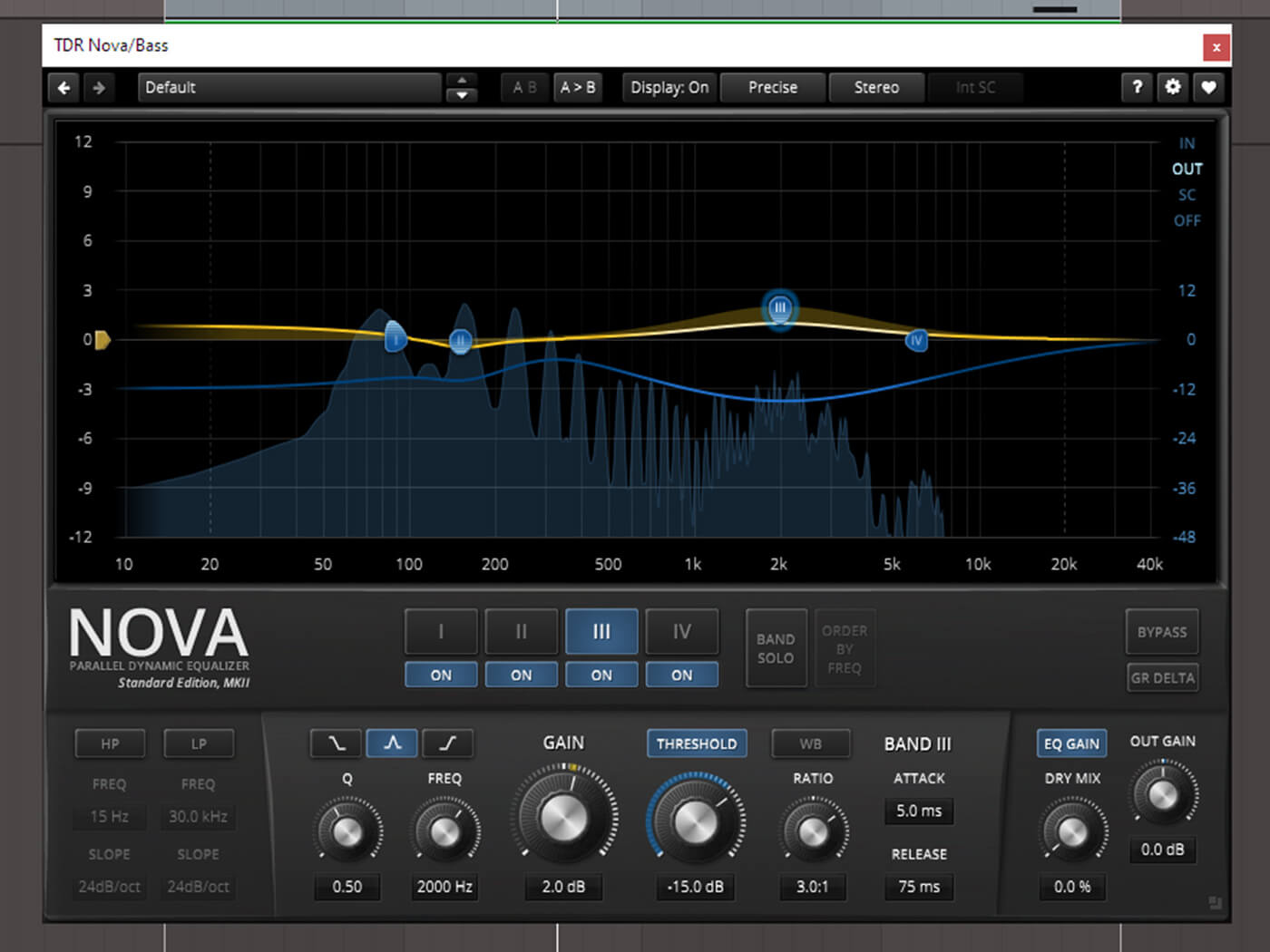 To make the boost react in the way we want, we hit the threshold button, then set the ratio to 3:1. Pulling down the threshold to -15dB gives us the effect we’re after, with an attack time of 5ms and release time of 75ms making the EQ band track the dynamics of the bass playing as naturally as possible.

While we’ve demonstrated the power of dynamic EQ using live recordings, these techniques are equally useful for all kinds of electronic music tasks, including processing sequenced drums, tidying up resonance heavy synth jams – and even on your master bus!