Make your programmed grooves sound like they were played by a real human drummer in our Weekend Workshop. 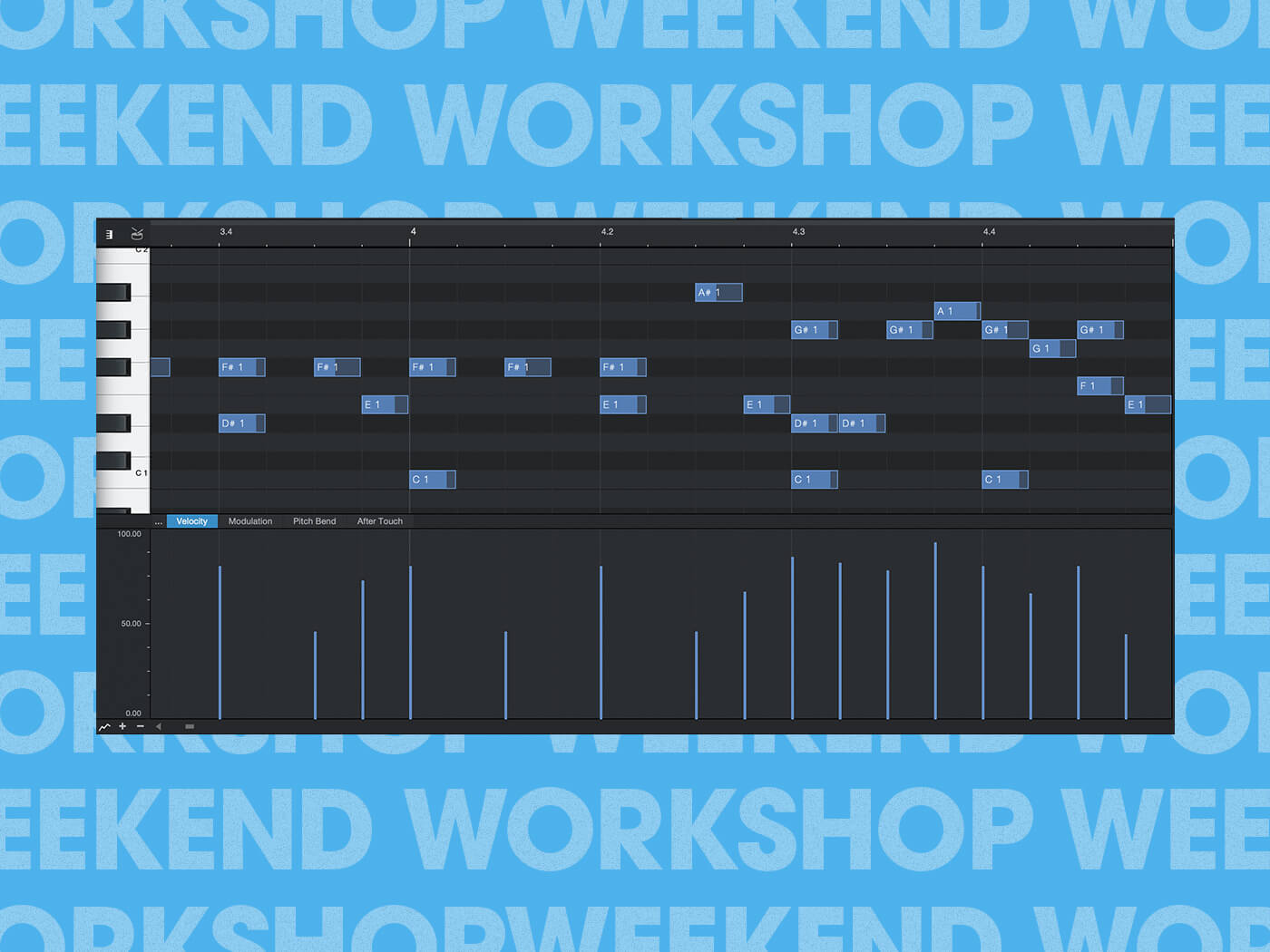 As producers, we often have the responsibility of coming up with hard-hitting, intelligent drum beats that are laced with groove and feeling. The only problem, of course, is that most of us aren’t drummers!

In this Weekend Workshop, we’ll go through some tips and techniques for making your drum parts more realistic, more human, and of course, funkier. Whether you’re looking to study the essence of groove, brush up on a few new skills, or go back to an old beat to overhaul it, there should be something for you in this little lot of learnin’.

If you’re ‘thinking like a drummer’, you’ll often get advice about ensuring that there are only ever four drums or cymbals hitting at once (one being the kick and the other the pedalled hi-hat). This is quite simple – a drummer has two hands free to hit anything, and two feet, each glued to a certain piece of the kit, so it’s a good rule of thumb to keep in mind.

You’re probably using drums, cymbals and kick hits plenty in your drums, but are you making full use of that left foot, or do you have a three-limbed drummer in your piano roll or sequencer?

A drummer’s left foot can tighten and loosen the hi-hats when they’re being struck by a stick, but when they’re being left alone – for example, when the right hand is playing on the ride or the toms – the left foot will often keep time by closing the hi-hats using the pedal. The MIDI note usually associated with this pedalled hit is G#, if everything’s programmed as standard in your instrument of choice.

In the example above, the first time the beat is repeated, we’ve added in the left foot G# note every offbeat, and made sure to bring the velocity down for each note. You’d usually find the pedalled hi-hat placed more subtly on the kick and snare hits, but this gets things a little groovier in this instance.

The essence of real groove is in dynamics, so if you’re programming everything at the same MIDI velocity, you’re doing it wrong. It’s forgivable to first enter your notes at the same velocity, whether you’re quickly clicking them in, using a MIDI keyboard or programming on a step sequencer, but you’ll absolutely have to make some tweaks later if you’re after a realistic-feeling beat.

This isn’t just because no human drummer is perfect; as we’ll see later, a human drummer can get pretty close in ‘velocity’ with successive drum or cymbal hits. Rather, the dynamics of a drumbeat are something played intentionally. 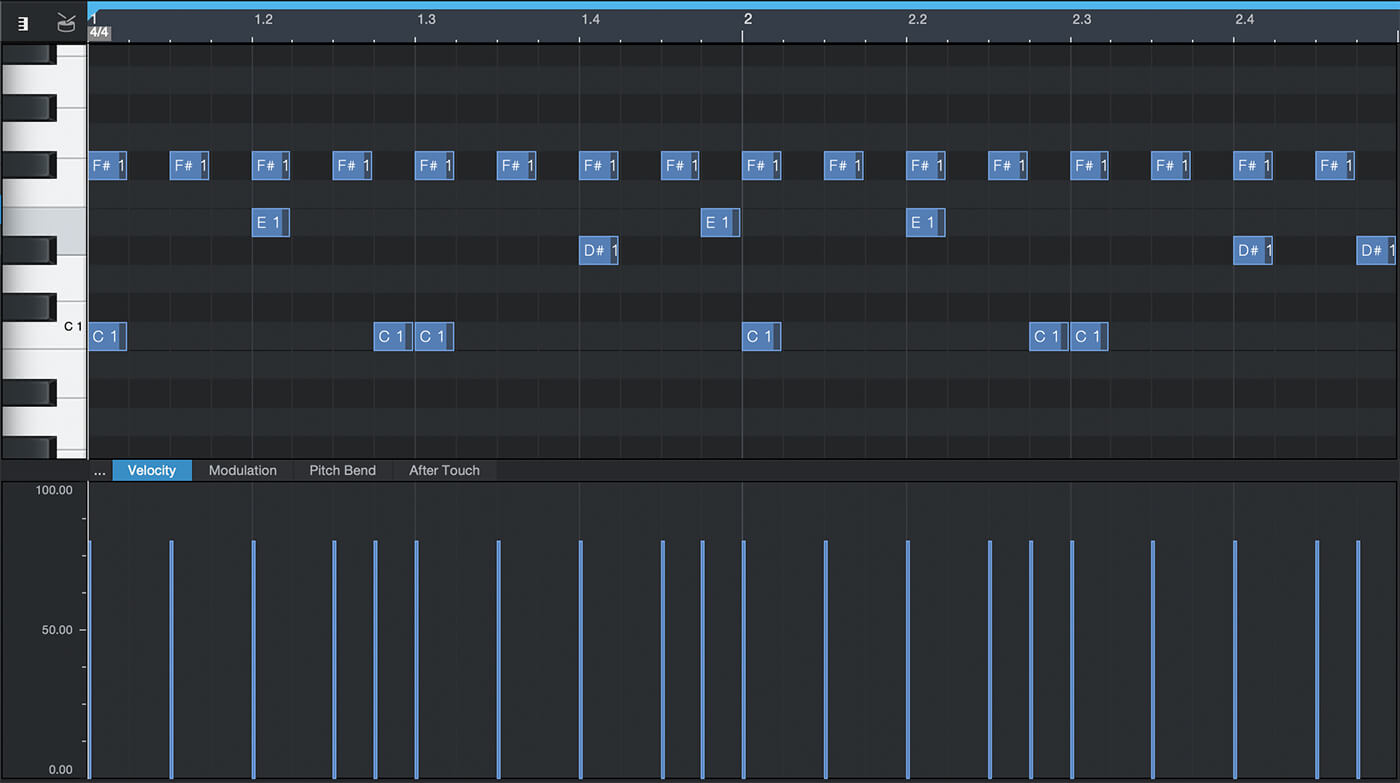 The beat above (the same beat we used before but with hi-hats) has notes at the exact same velocities. It’s stale and lifeless, as we can hear in the audio example. Boooriiiing.

We’ll get to work adding some larger dynamic interest in the right places. For the eighth-note hi-hats – every other note, where there’s no kick or snare – we can reduce their velocities for more groove. Here in Studio One, we set it down to about 55% for these notes.

Next, there are some kicks that play in quick succession. One is on the beat, and the other one plays just before it, to add some dynamics. We’ll reduce the strength of the not-on-the-beat kick, as it’s only here to give some flavour – not to be a vital part of the beat itself. 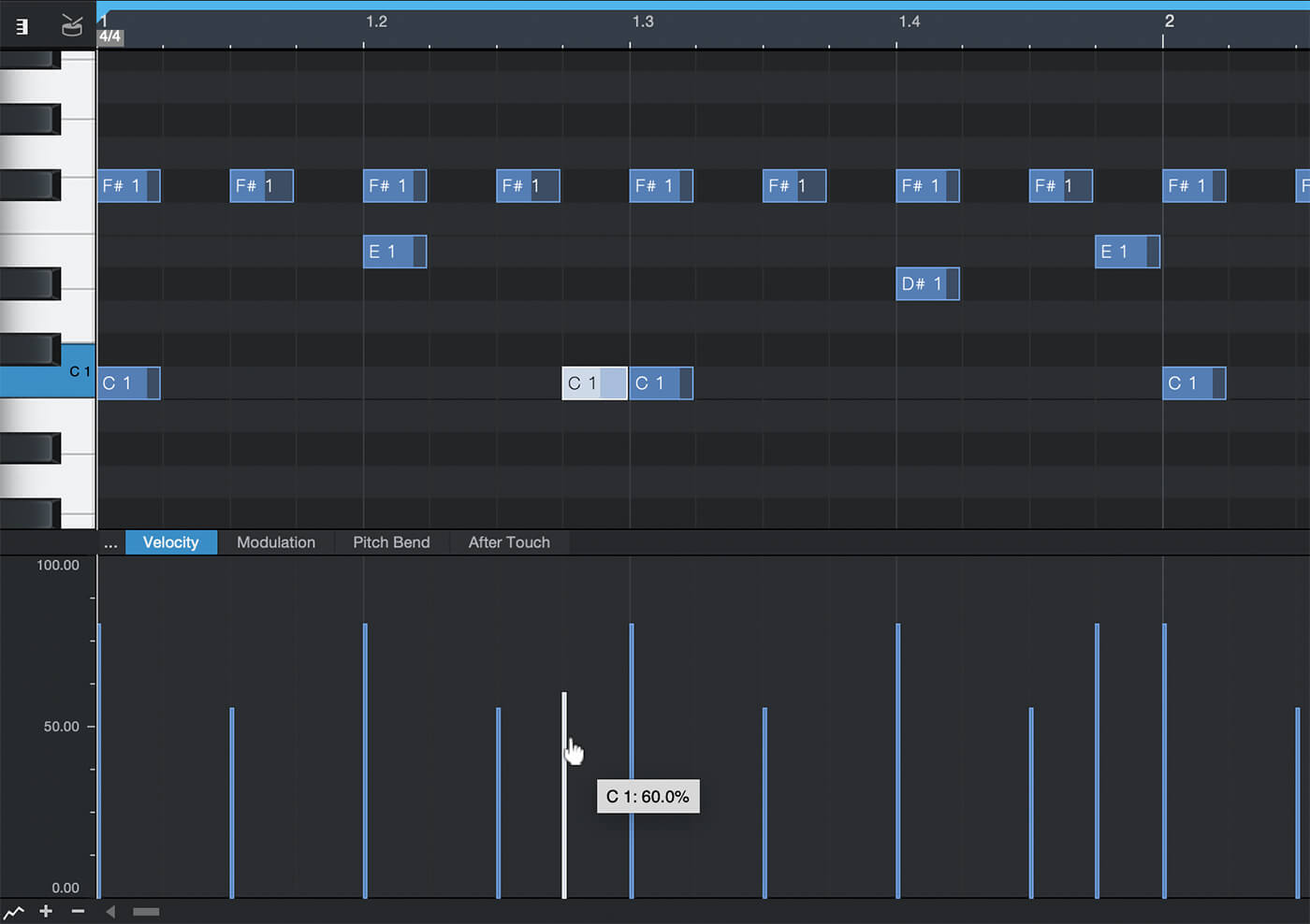 The other elements of the beat that don’t follow strict kick-and-snare patterns are the extra snare hits on both MIDI notes D and E. We’ll make some slight changes to the velocities here as well to make our final audio. The audio below uses notes between 46% and 81% velocity (that’s about 70 to 106 in traditional MIDI values). Compare it with the original audio to hear the difference we’ve made simply by adding some dynamics.

We’ll go through humanising this beat to add random variation, and also programming some even quieter ghost notes, in later tips.

Ghost notes are very quiet, low-velocity hits, usually on the snare, that add subtle feeling to a groove. Experienced drummers add ghost notes as a matter of course, and you’ll likely hear those snares quietly rattling on some of the most infectious grooves you listen to – at least you will when you’ve learnt to do it yourself.

Listen to the beat without and with ghost notes below to get the context behind these low-level drum hits, and then we’ll show you how to put them together yourself, step by step.

Starting with our ‘dry’ beat from before, inspect what rhythm the hi-hat is playing (in this case eighth-notes) and add quick, very low-velocity snare hits in between each of those hi-hats.

Now it’s time to chip away at those left-hand snare notes, removing them to make a groove that’s not quite so busy.

We can even add some dragged notes, using pairs of 1/32 notes in even lower velocity. We’ll back off the velocity of all those ghost notes even more to finish things off completely, getting the audio example you heard at the top of this tip.

4. Get your kicks in all the right places

You might have never sat behind a real drum kit, but the satisfying thud of a kick drum hitting at the same time as a crash cymbal is one of life’s great pleasures. So much so that a crash cymbal usually sounds completely empty and devoid of impact without being placed with a kick – make sure you get the two in together.

Next, when programming fills, one rule of thumb is to keep the kick marking every beat (or eighth-note, depending on your particular groove). As your snare, toms or anything else play the actual rhythm of the fil, keep the kick drum ticking the time to ground everything together.

5. How to really humanise and randomise

You often get tips on drum programming that instruct you to randomise or humanise your MIDI timings and velocities, making your programmed rhythms sound like they’re being played by a human rather than by a perfect machine or a Swiss drumming robot. Modern DAWs are usually equipped with ‘Humanize’ or ‘Randomize’ functions for this exact reason.

But rarely do these tips give you much instruction on how much to randomize things by. Real human drummers aren’t perfect, sure, but they spend years practising to get their timing and the strength of their hits pretty close to consistency – just knocking all your notes way off the MIDI grid isn’t necessarily going to make your groove sound better, then.

When randomizing or humanizing your notes, let the velocities vary by about 4% up or down (or 4 or 5 velocity units, if that’s how your DAW counts it), and let the timings go no further out of time than about eight MIDI ticks, and you’ll keep things close to the grid but slightly off – enough to sound like they’re being played by a real human drummer.

6. Try one beat with the reverb of another

This tip is far from realistic, but it’s worth a go for injecting your programmed beats with a sense of life and new space. 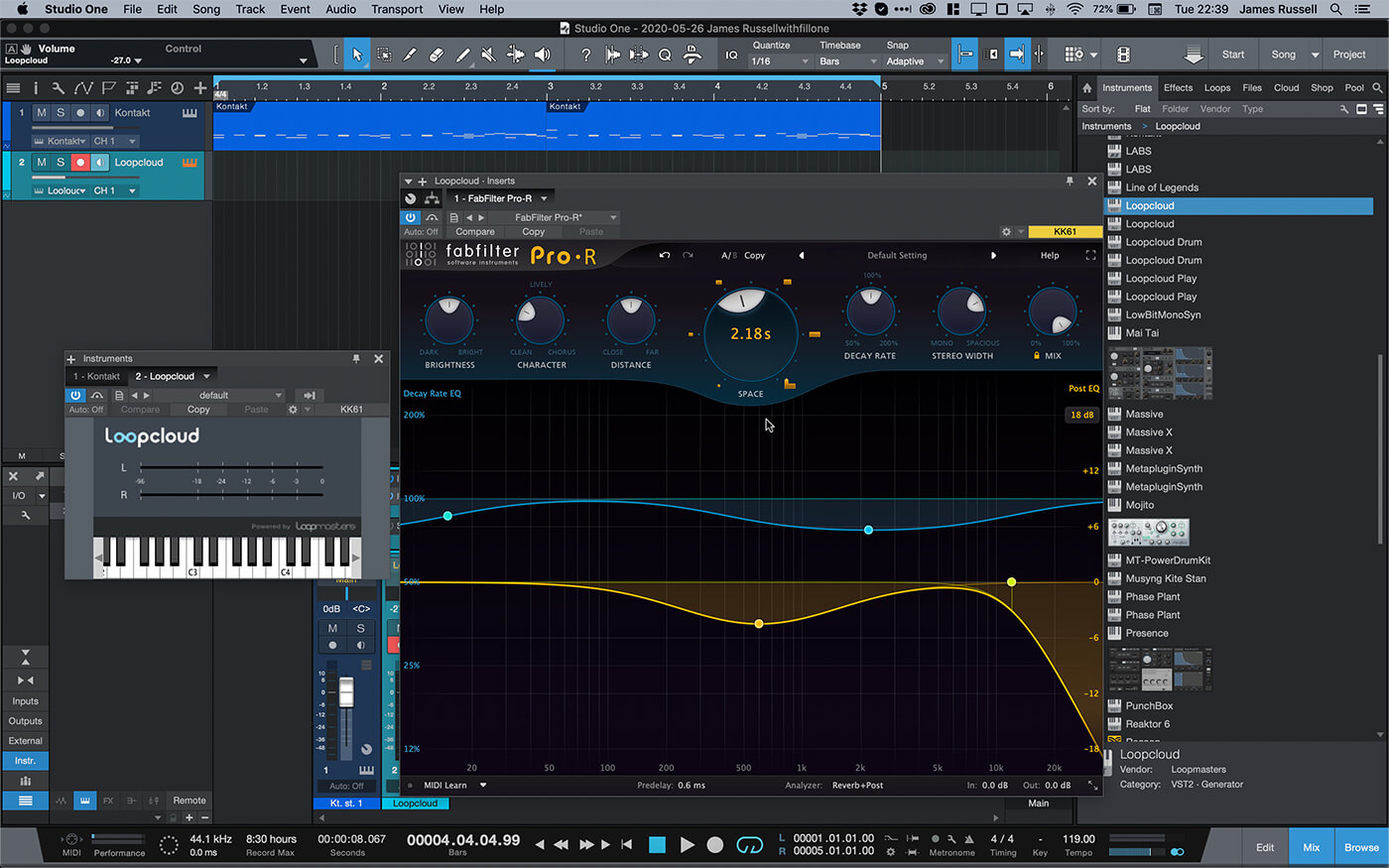 By bringing a 100% wet reverb in over the other groove, we can completely replace the ‘shadow’ of the original beat with a new one. As long as the two are of the same tempo, doing this doesn’t detract from the original beat itself. You might be surprised at how naturally one beat will marry with another beat’s reverb, adding an extra tonal layer to the space in your track.

Share the results of this workshop in the new MusicTech Creator Community Facebook Group for community feedback. We’d love to hear what you come up with.