Make a funky modular filter for free with Reaktor 6 Blocks

Try your hand at modular audio processing and make a funky sequenced filter with the free version of Native Instruments Reaktor. 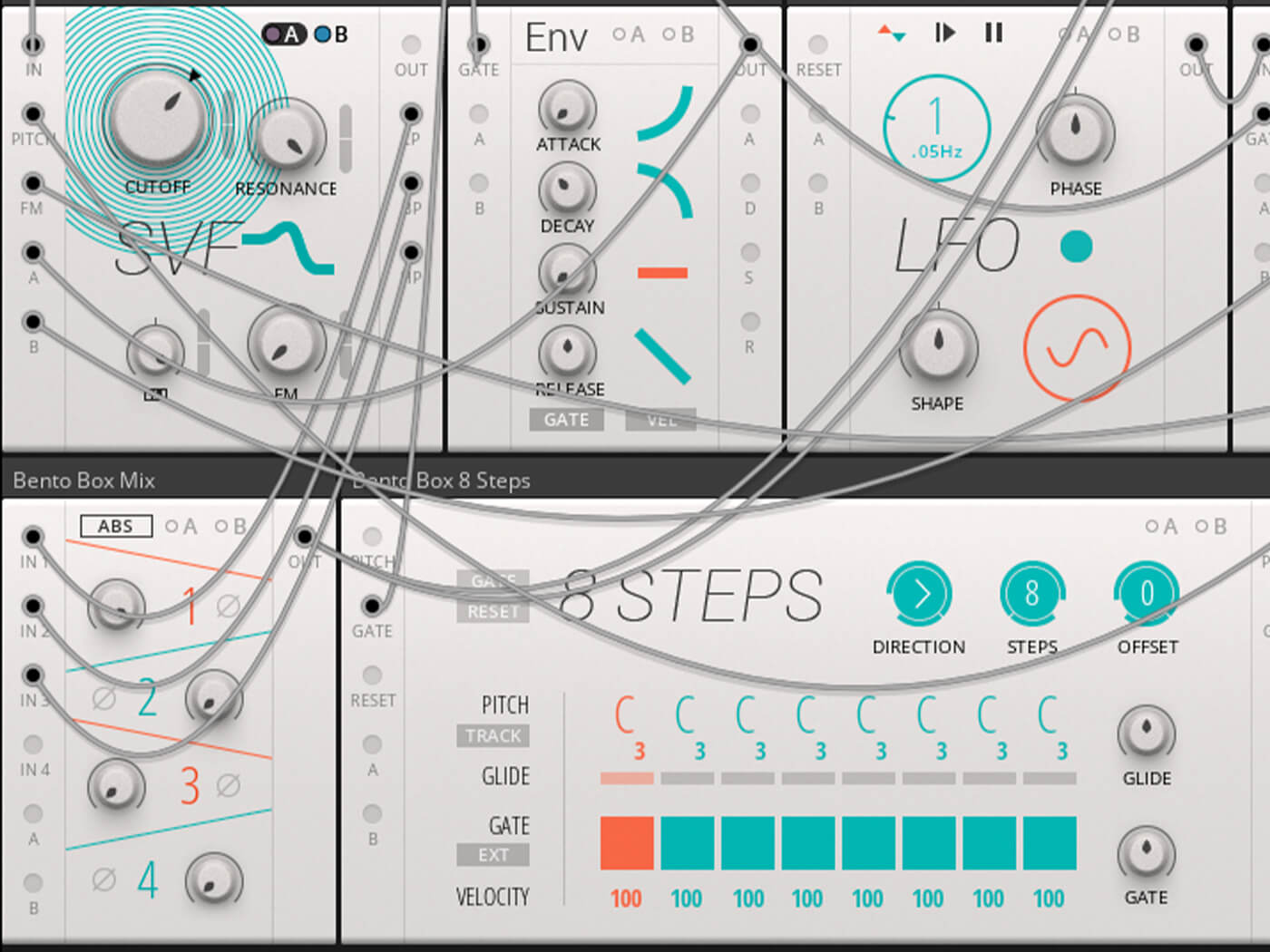 If you’re keen to try out modular audio processing but don’t have the budget for a massive rack of hardware, don’t fret: Native Instruments’ free Reaktor 6 Player comes with Blocks Base, a set of virtual modules that you can use to create your own synths and audio effects.

In this Weekend Workshop, we’ll use the free Blocks Base to make a sequenced filter effect with sequenced gating, filter FM, and a sample & hold LFO.

1. Getting audio into Reaktor FX

Let’s begin by adding BlocksBeat.wav to an audio track in our DAW. Add Reaktor 6 FX to the audio track, and select the Patch option to start using Blocks. If you play the project back now, you’ll notice that you won’t hear anything. This is because no audio routing is set up by default. The simplest way to hear what’s on the audio track is to route the Audio In directly to the Audio Out, like so. 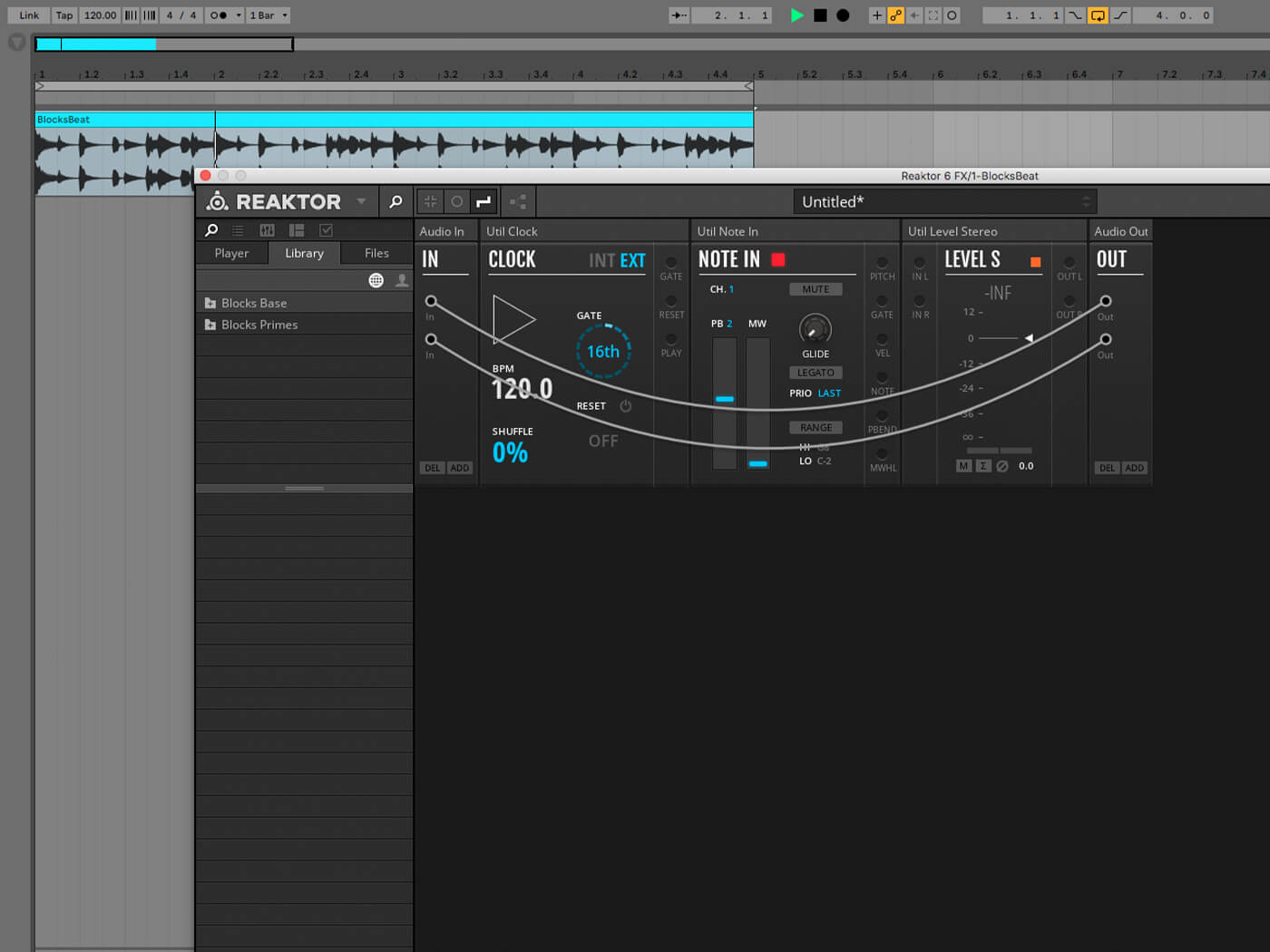 Download the example audio here or use your own.

To disconnect the direct routing, click on the inputs on the Audio Out block. Let’s route the audio through a filter instead of directly to the output. Open the Blocks Base > Bento Box folder in the Library tab, and double-click FLT-Bento SVF Filter to add it to the rack. Drag the first Audio In output to the SVF Filter In, then drag the SVF Filter Out to both Audio Out inputs. Now on playback, you can use the Cutoff knob to low-pass filter the audio signal. 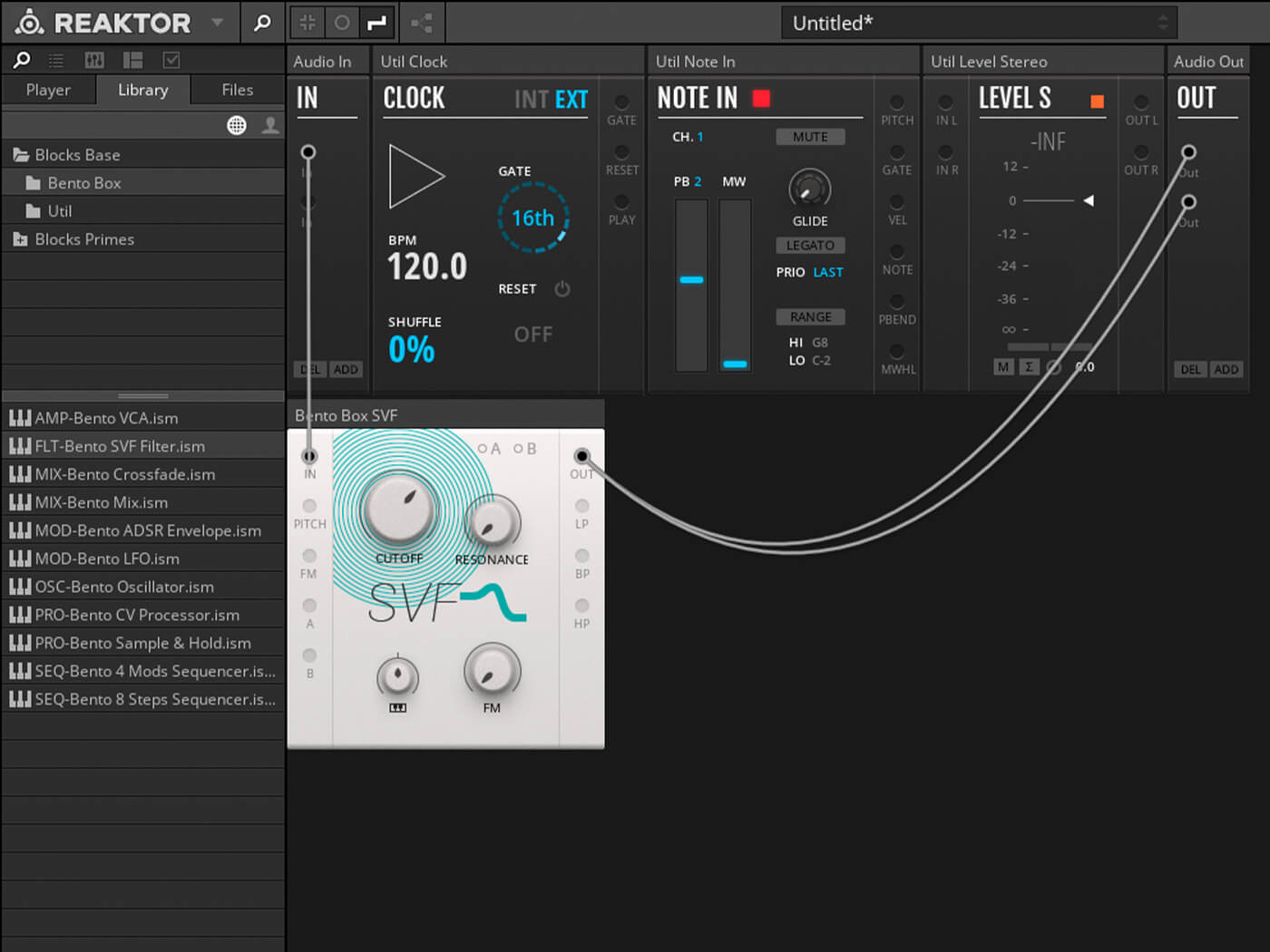 This is using Blocks as an effect at its most fundamental level, simply route the audio from the input through whatever processing you like, then on to the output.

Let’s make our effect a little more interesting by using an envelope to modulate the filter cutoff frequency. Double click MOD-Bento ADSR Envelope to add it to the rack, then route its output to the SVF’s mod input A. Click the Mod A button at the top of the SVF interface to bring up the Mod input A modulation levels. Drag up on the modulation amount next to the Cutoff knob. 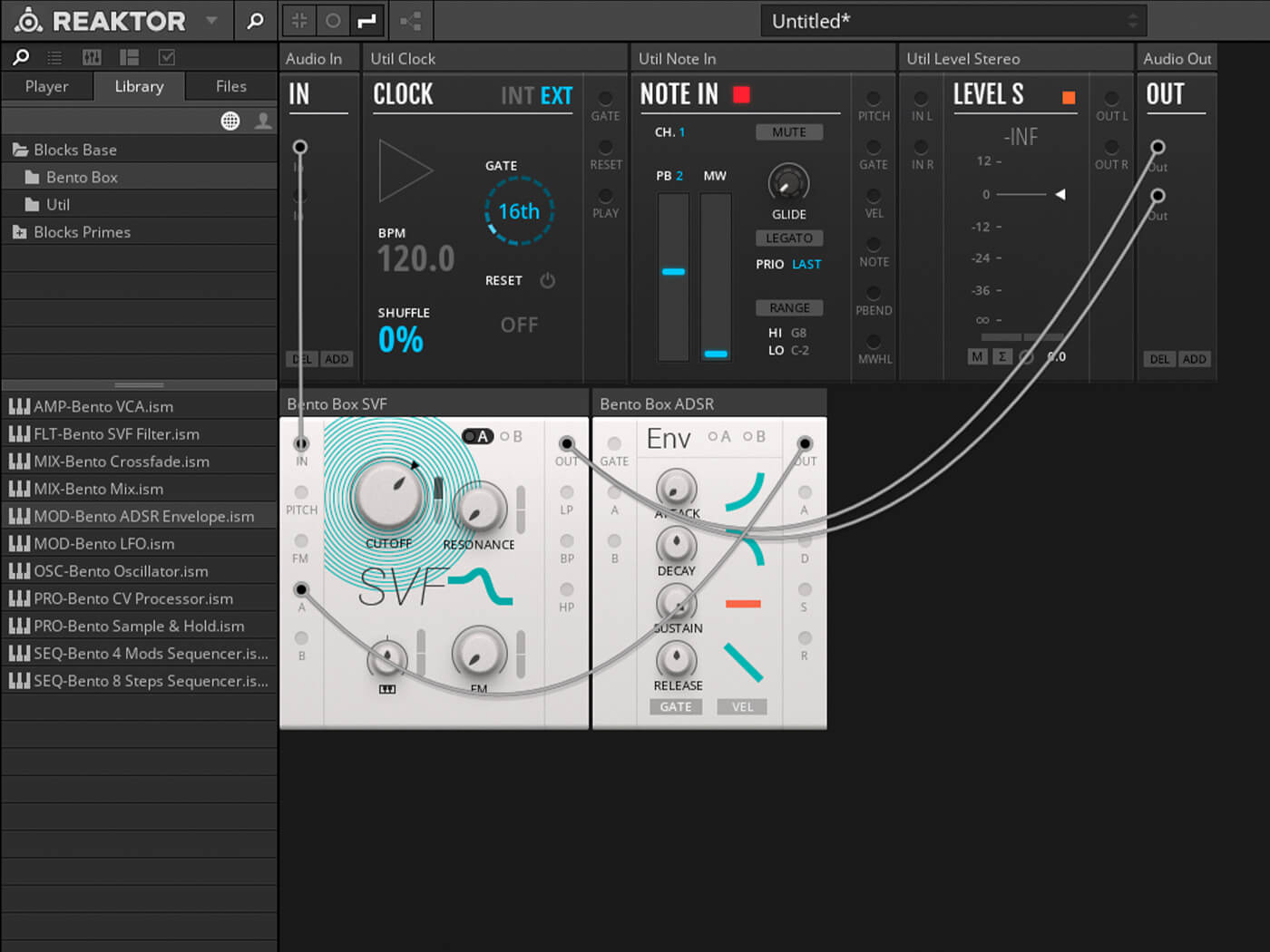 Even though we’ve turned up the modulation amount, the envelope won’t affect the filter cutoff frequency until we activate the envelope with a gate signal. To do this, connect the Util Clock’s Gate output to the ADSR Envelope’s Gate input. Turn the SVF Filter Cutoff all the way down, and turn the Sustain level on the ADSR envelope all the way down too. Now on playback, you’ll hear the Gate trigger the envelope on 16th notes, and you can use the Envelope’s Decay to control how quickly the filter moves. Set it to about 28ms. 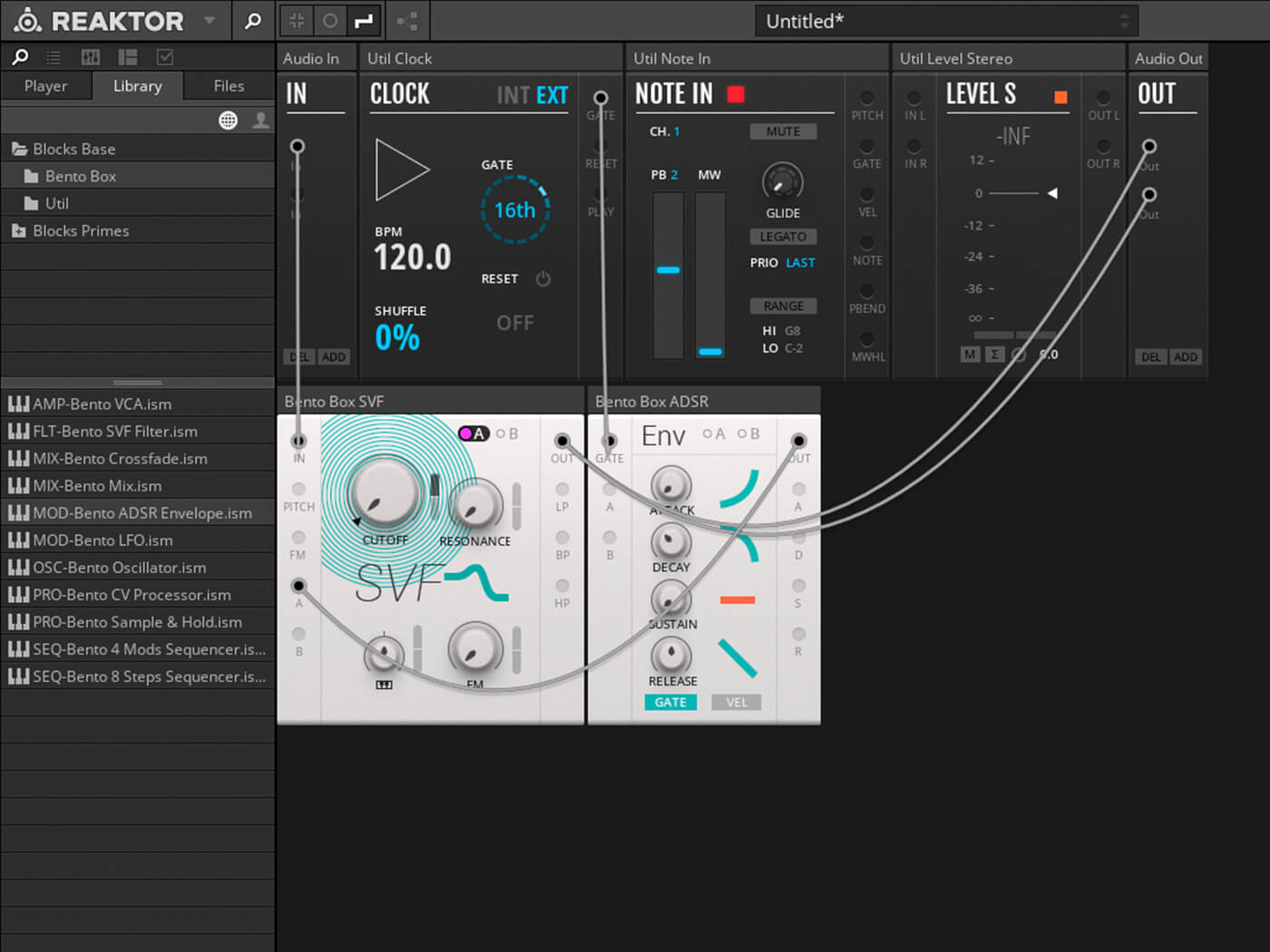 You can control the resolution of the Gate by dragging the Gate value on the Util Clock panel. We’ll come back to this later, so leave it at 16th notes for now. 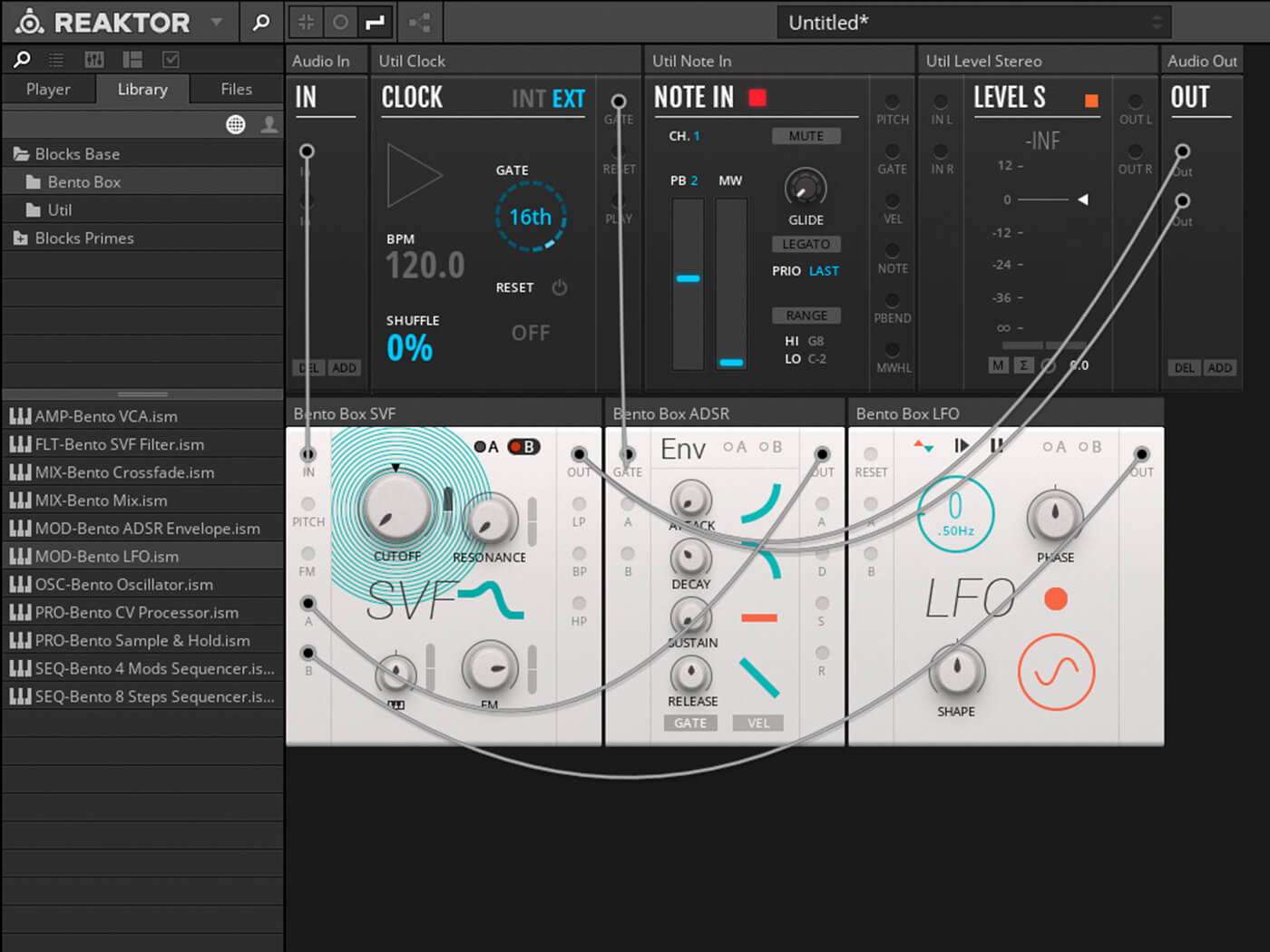 Even before playback, you’ll see that the modulation amount on the outside of the Cutoff knob is animating. On playback, you’ll hear that the signal now filters in and out slowly, in addition to the 1/16th note filter movement created by the gated ADSR. 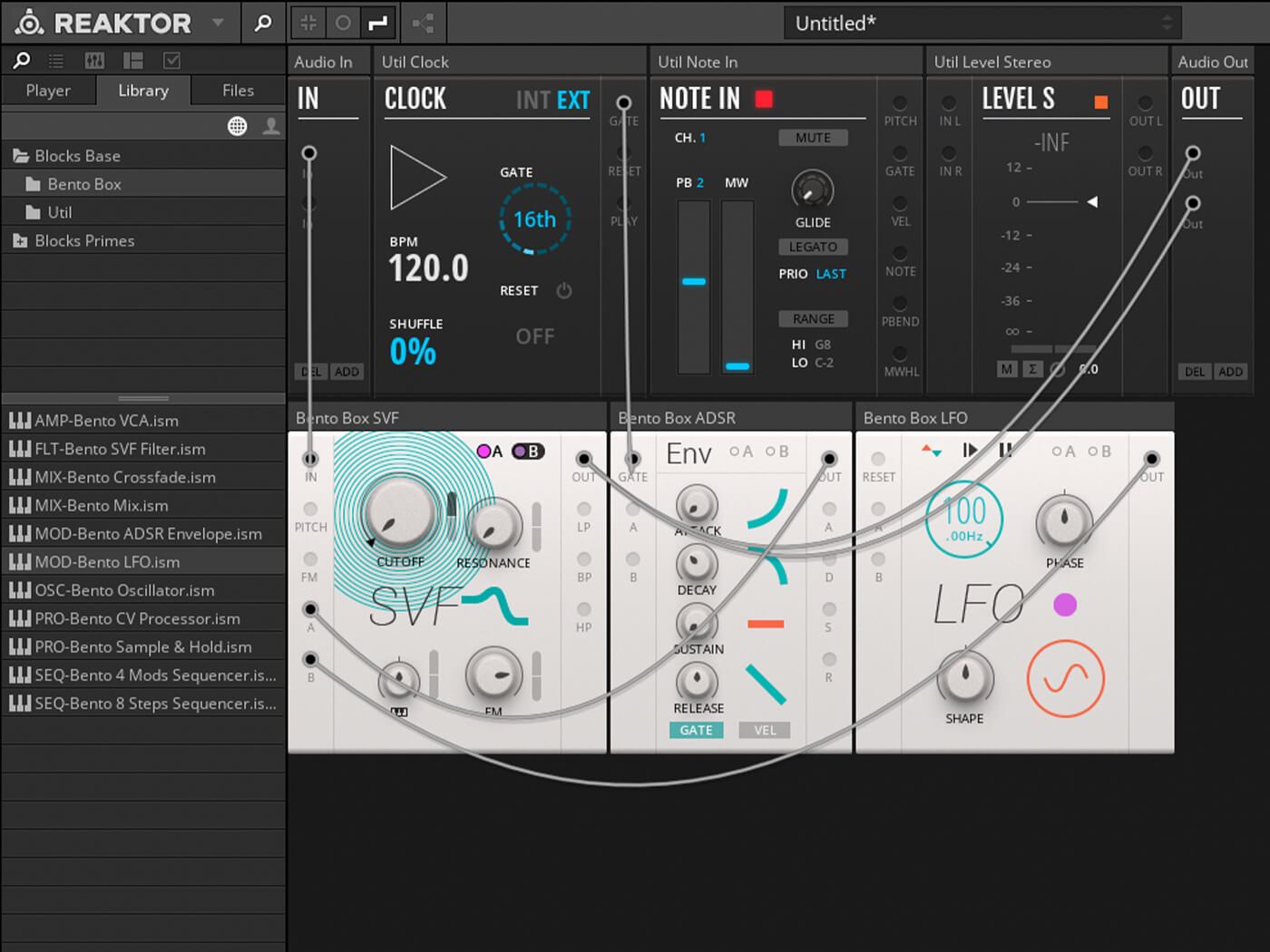 With Reaktor Blocks’ modular architecture we’re not just limited to using basic modulation sources, so let’s try out some processing on the LFO’s signal. We’re going to use Sample & Hold to turn a smoothly moving LFO modulation source into a series of stepped values.

Click the Mod inputs A and B connection on SVF Filter to disconnect the ADSR and LFO, then add PRO-Bento Sample & Hold to the rack. 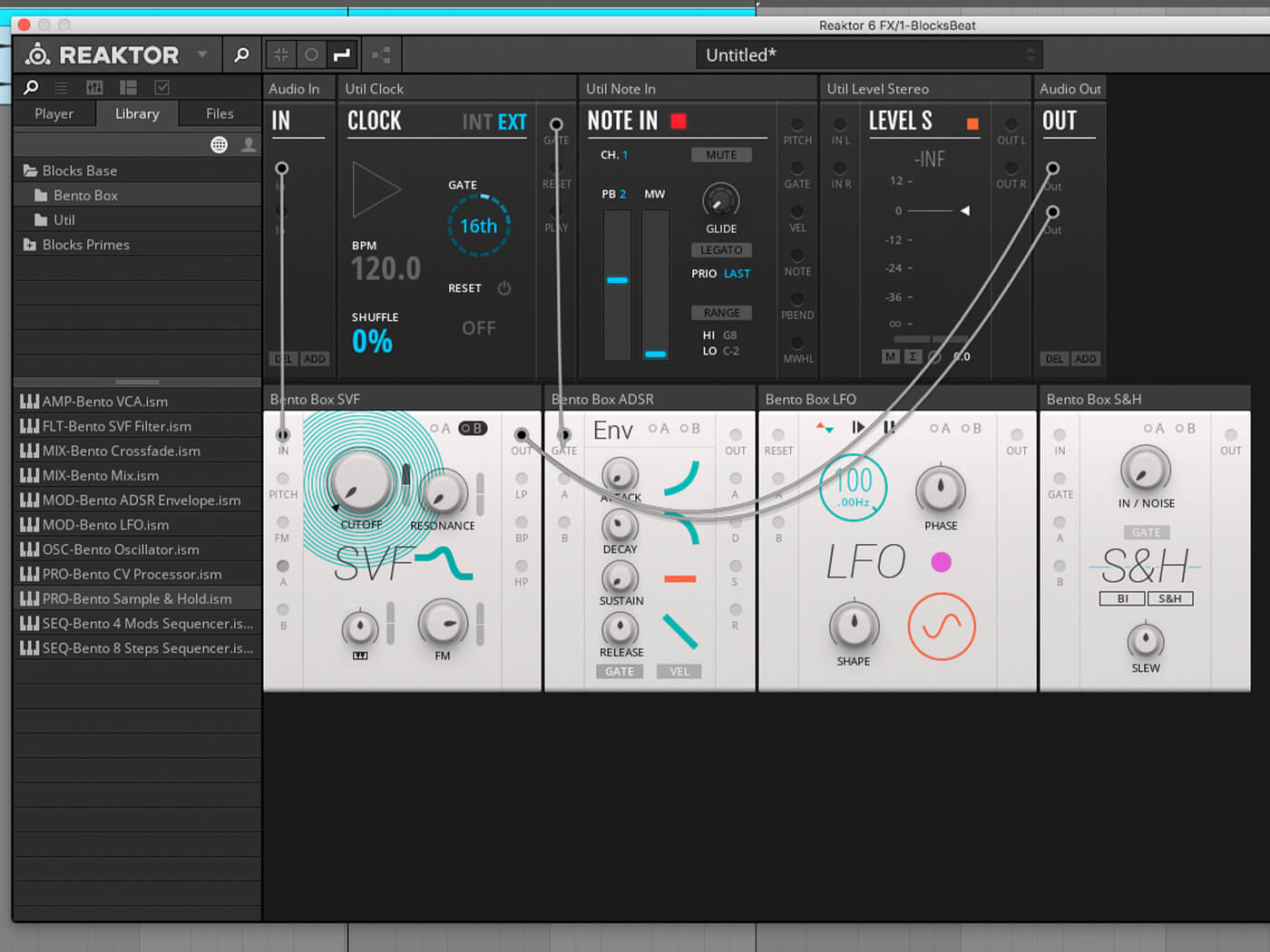 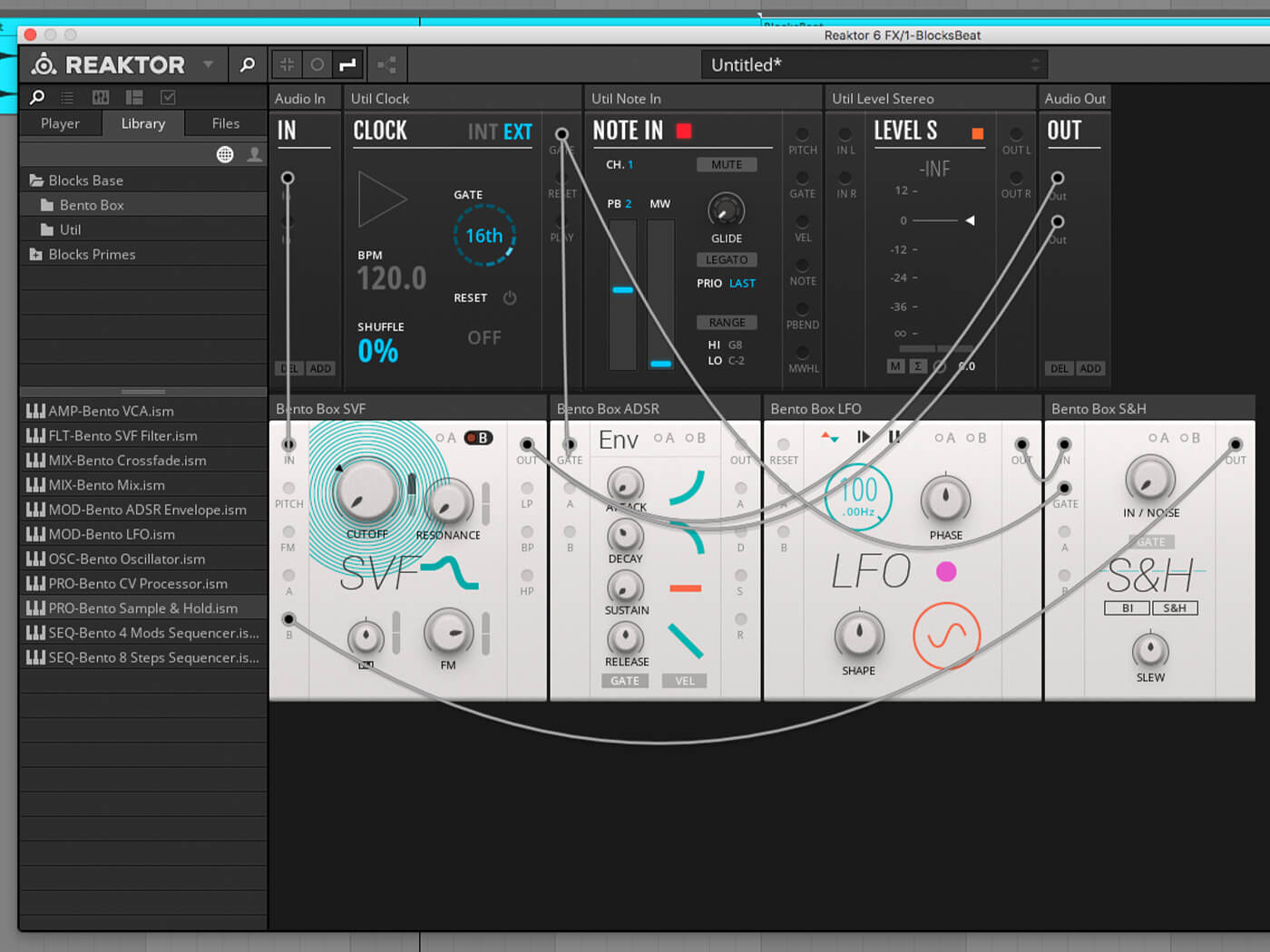 Currently, it’s hard to hear what’s going on with our audio signal as the SVF Filter is closed, so let’s set its Cutoff to about 1.5kHz. Turning down the Frequency of the LFO will make things easier to hear too, set it to about 1Hz. 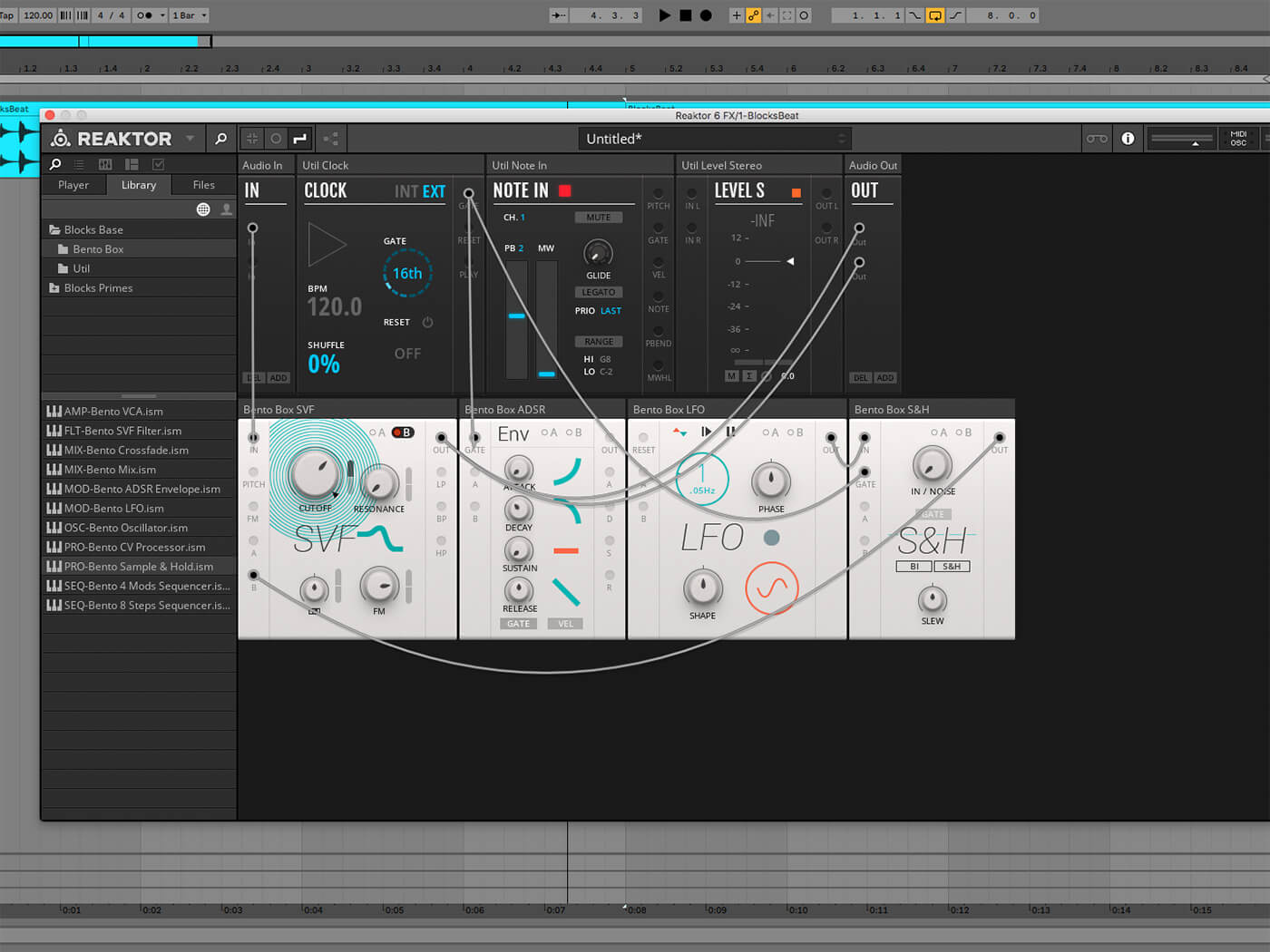 Now on playback, you’ll hear that rather than the smooth LFO movement we had before, we’re got a series of synced, stepped values. Turn up the SVF Filter’s Resonance to its maximum value to hear this more clearly. 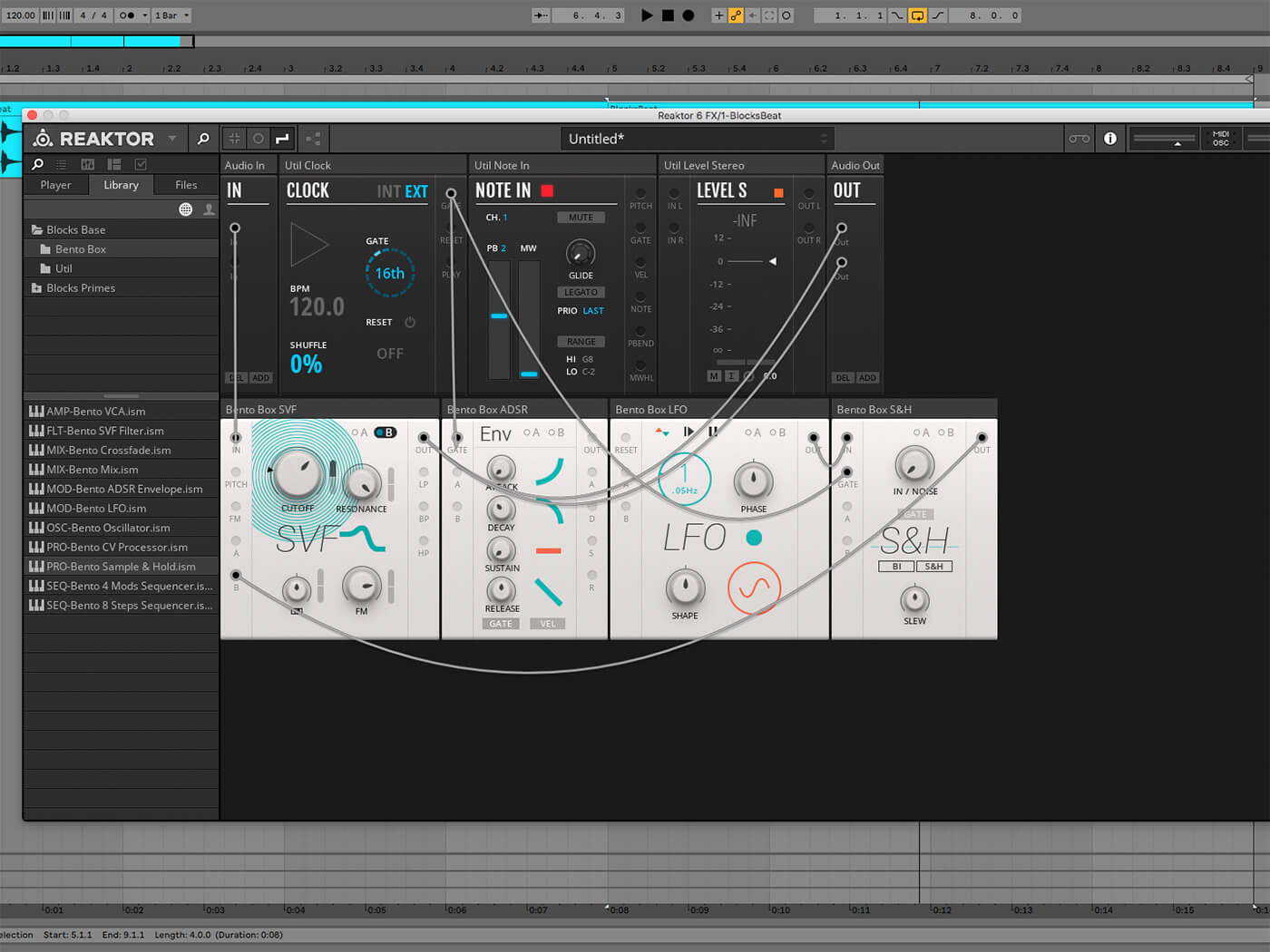 What’s happening here is that the S&H is ‘sampling’ and outputting the output of the LFO at a rate currently dictated by the Util Clock’s Gate, which at the moment is set to 16th notes. So, every 16th note the S&H takes the instantaneous value of the unsynced LFO, and simply outputs that value until it’s told to sample again a 16th note later. This gives us a series of random-sounding values that are nonetheless synced to 16th notes. We can hear things a bit more clearly by setting the Util Clock’s Gate value to 4th. 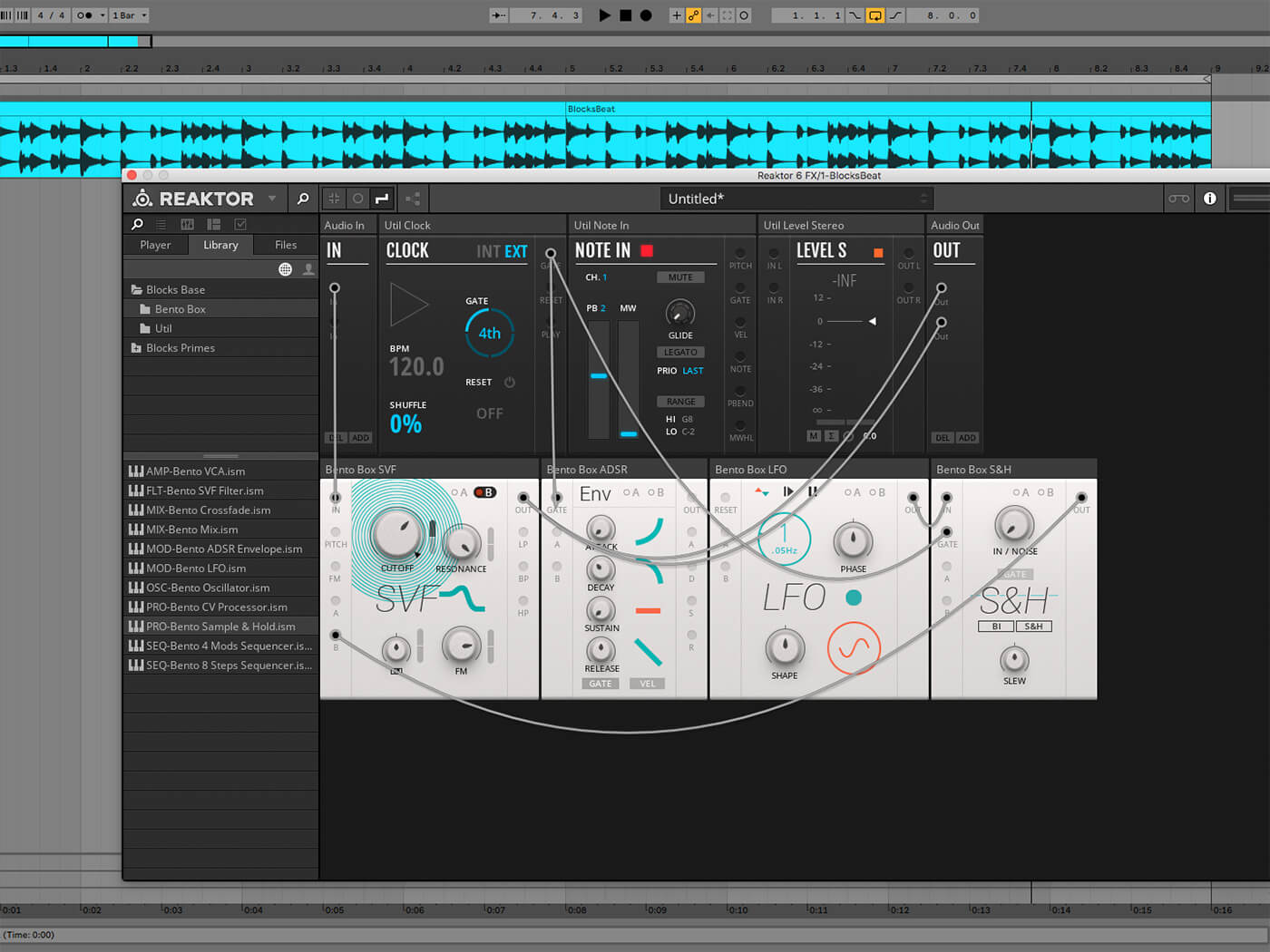 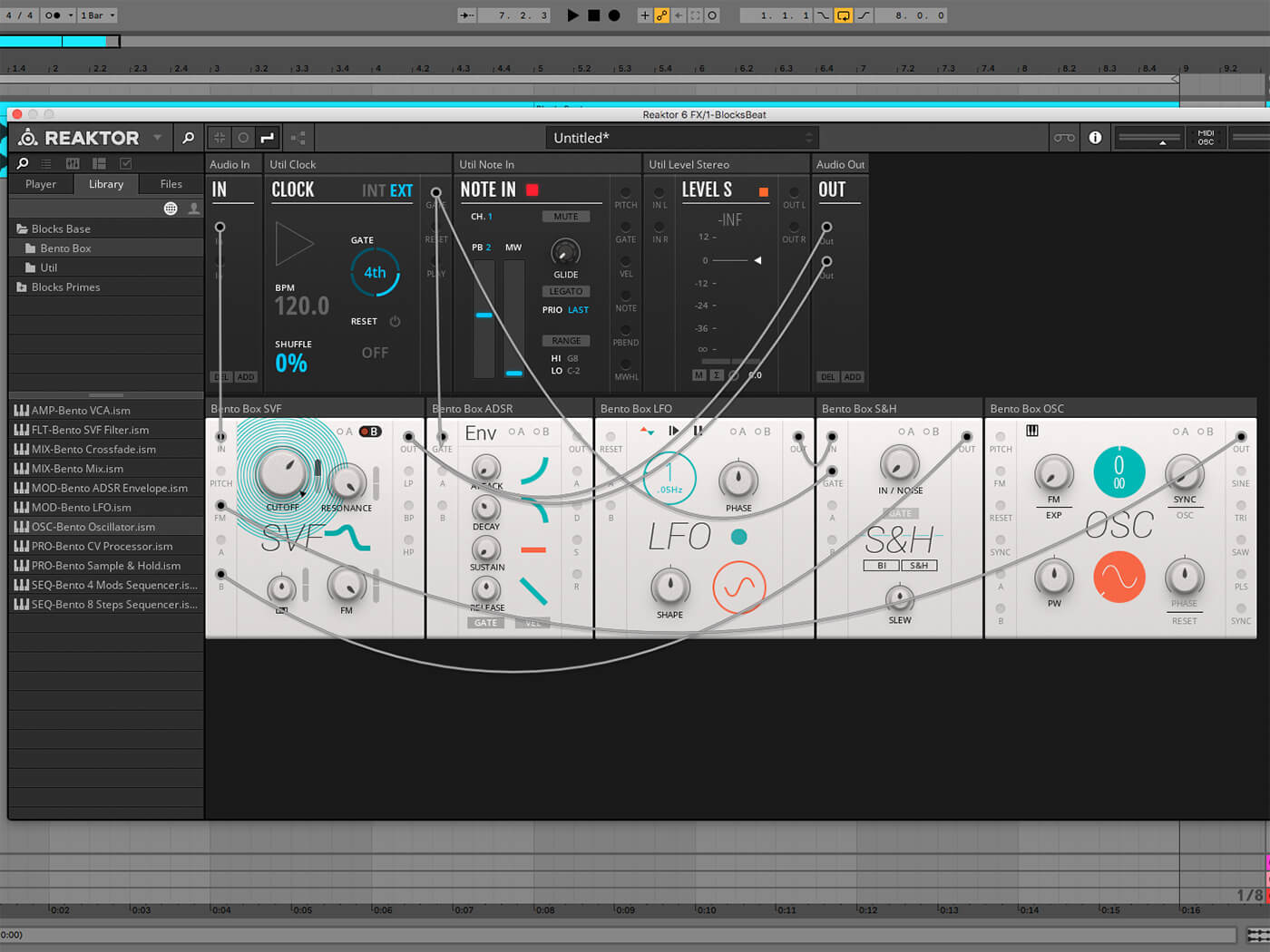 We can change the character of this effect by adjusting the tuning of the Oscillator. Turn it up to +20, and try morphing the Oscillator’s shape with the Wave knob 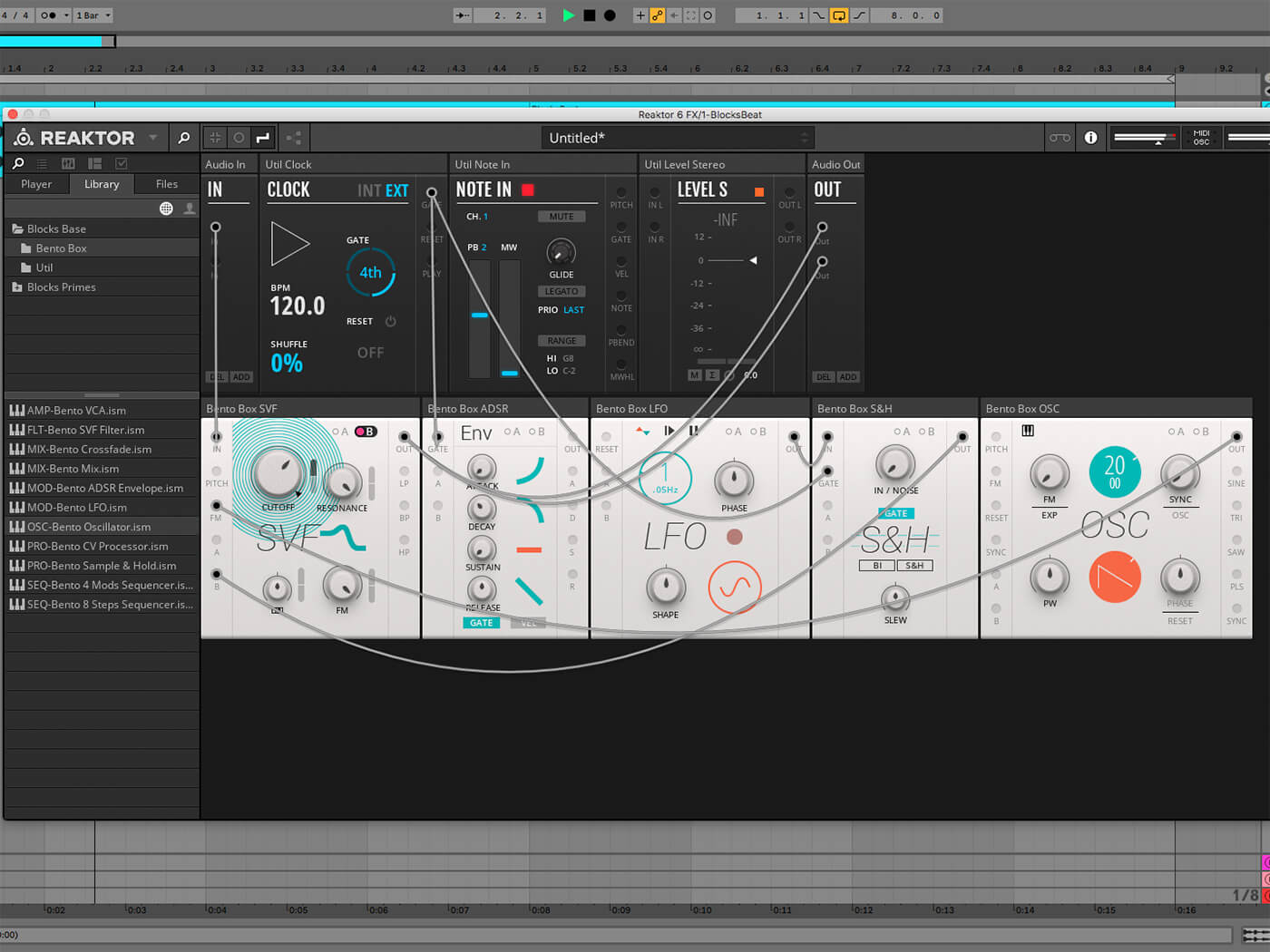 SVF Filter is capable of multimode filtering, but so far we’ve only used the low-pass filter type. You’ll notice that the SVF Filter has four outputs; Out, LP (low-pass), BP (band-pass) and HP (high-pass). Out outputs the signal with the filter type selected on the module’s interface, and by default this is set to low-pass, that’s the reason this is all we’ve heard so far. Let’s use the dedicated outputs for the various filter types with a mix module, so we can set the level for each type rather than simply selecting a single mode. 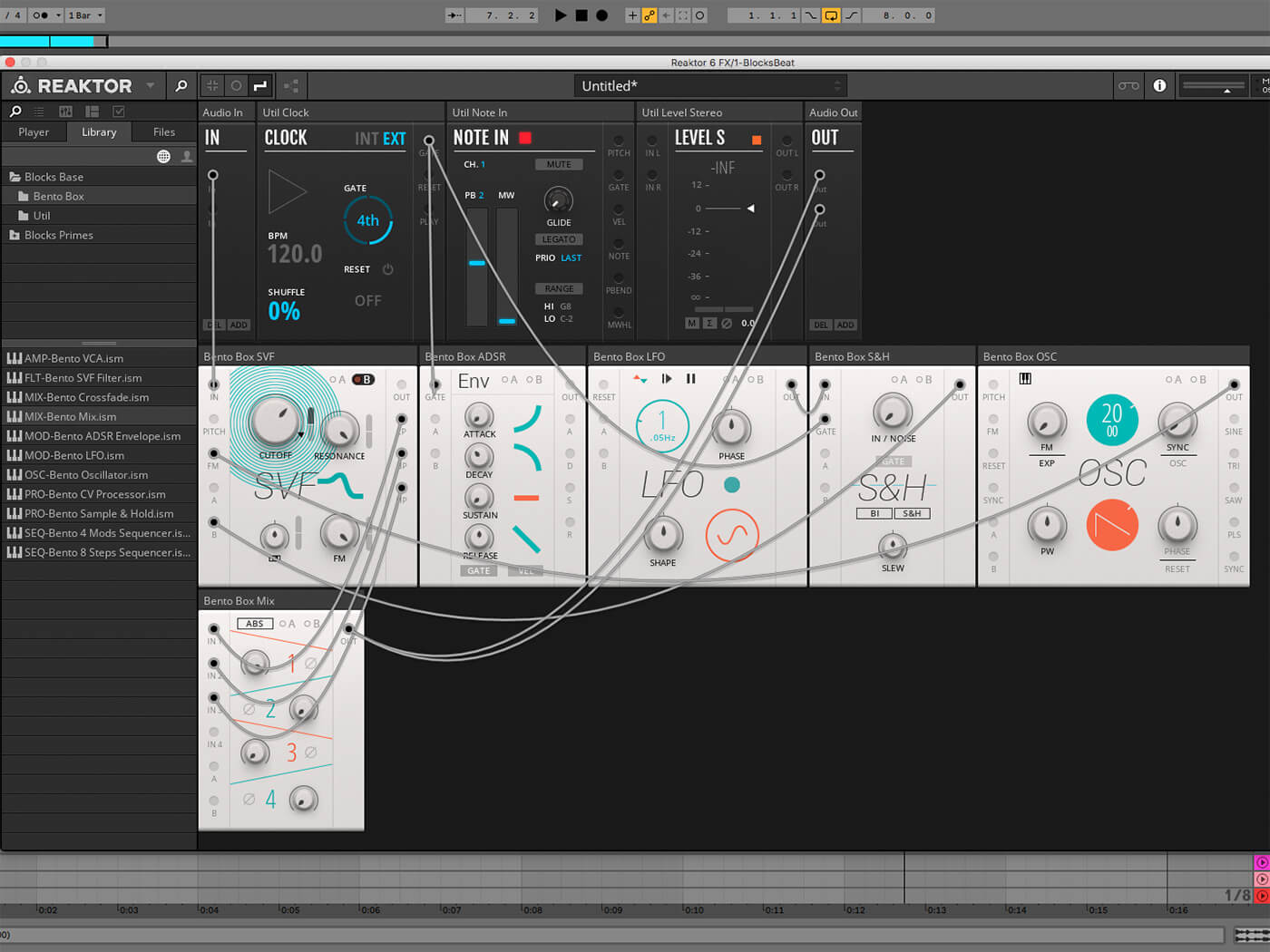 You can now set the individual levels of the low-pass, band-pass and high-pass outputs using the 1, 2 and 3 level knobs respectively.

You can also invert the polarity of these signals using the Invert buttons next to each knob. You can create a peak filter-style effect by turning up the high-pass channel with knob 3, and activating its Invert button. 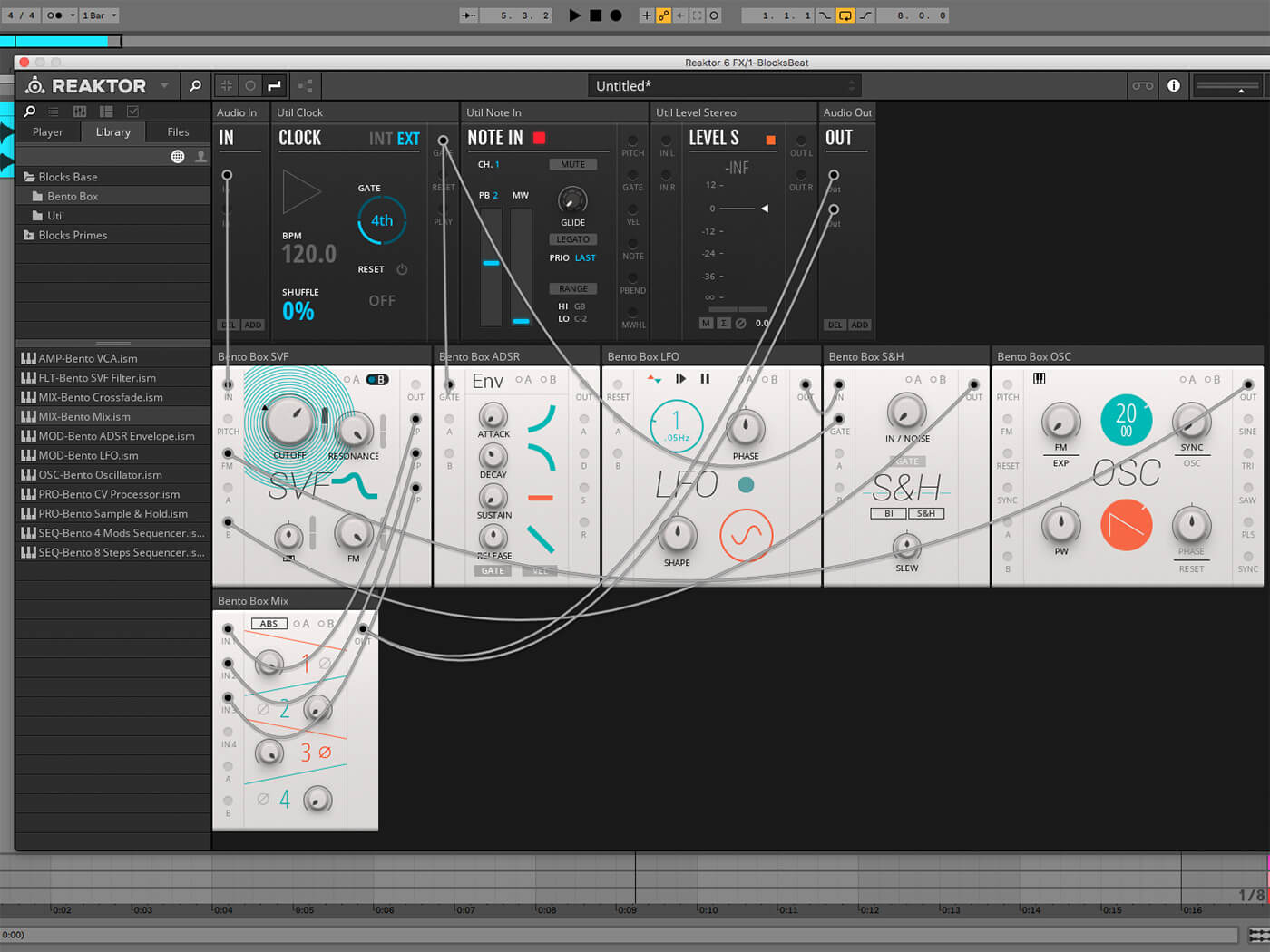 All this pseudo-random filtering is fun, but let’s make things a bit more controllable with a step-sequencer. Turn the SVF Filter Cutoff Mod B modulation amount and the FM amount down to zero, and add SEQ-Bento 8 Steps Sequencer to the rack. This sequencer needs to be triggered via gate for it to do anything useful, so connect the Util Clock’s Gate output to the 8 Steps’ Gate input. 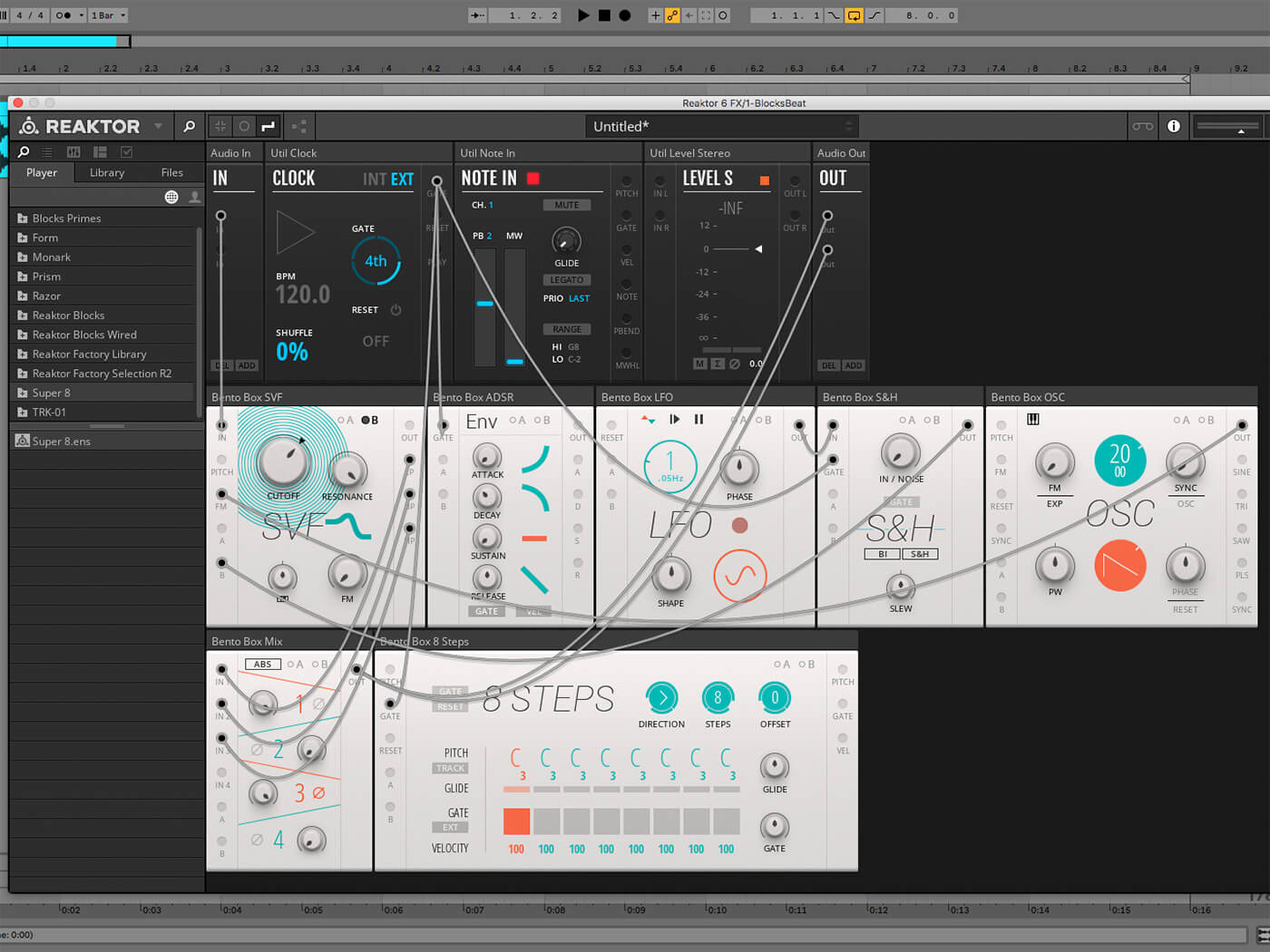 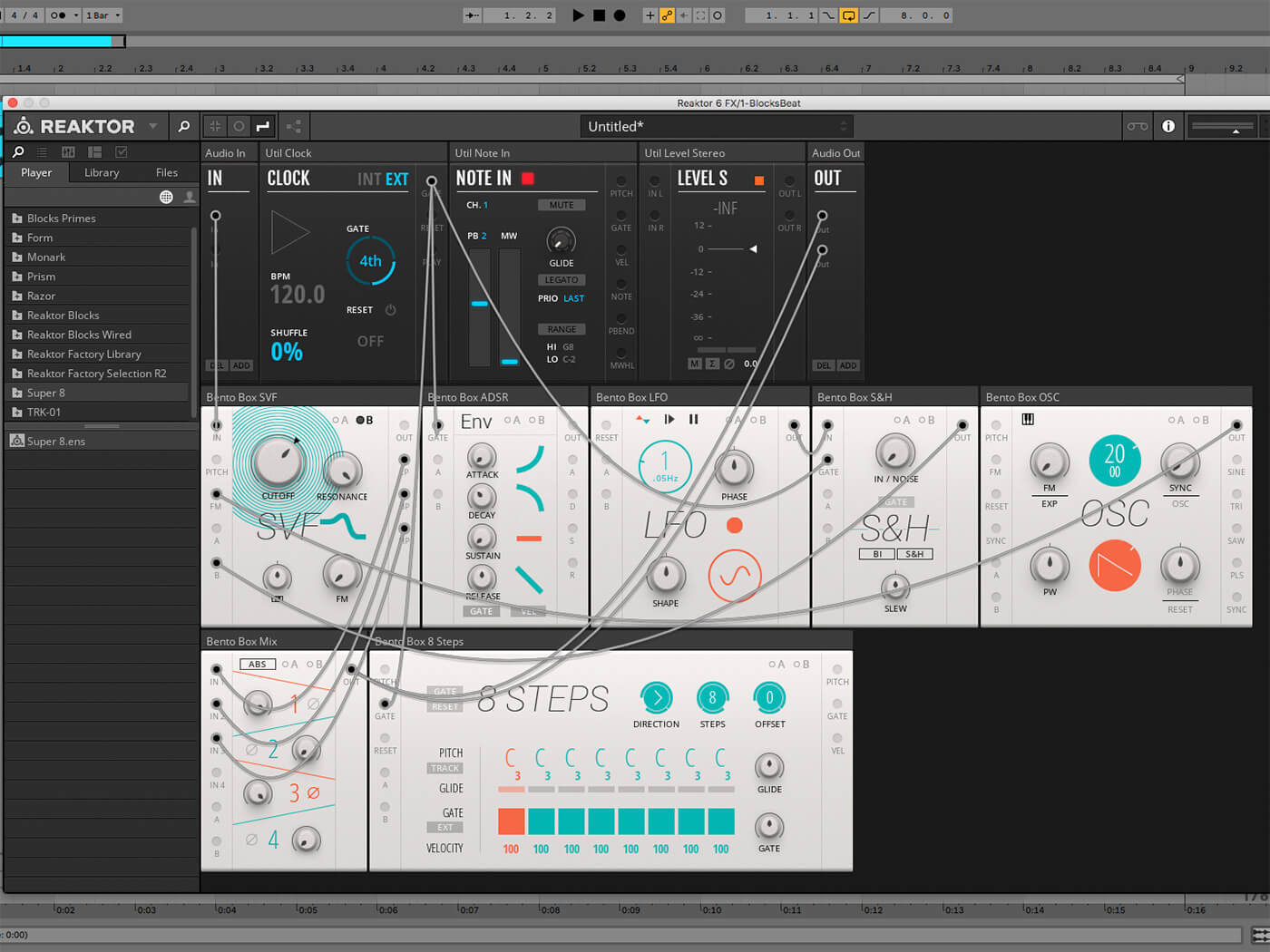 Next, turn up SVF Filter’s Keytrack amount (bottom left) to 100, and in the 8 Steps Sequencer, drag on some of the steps’ Pitch values to create a sequence. 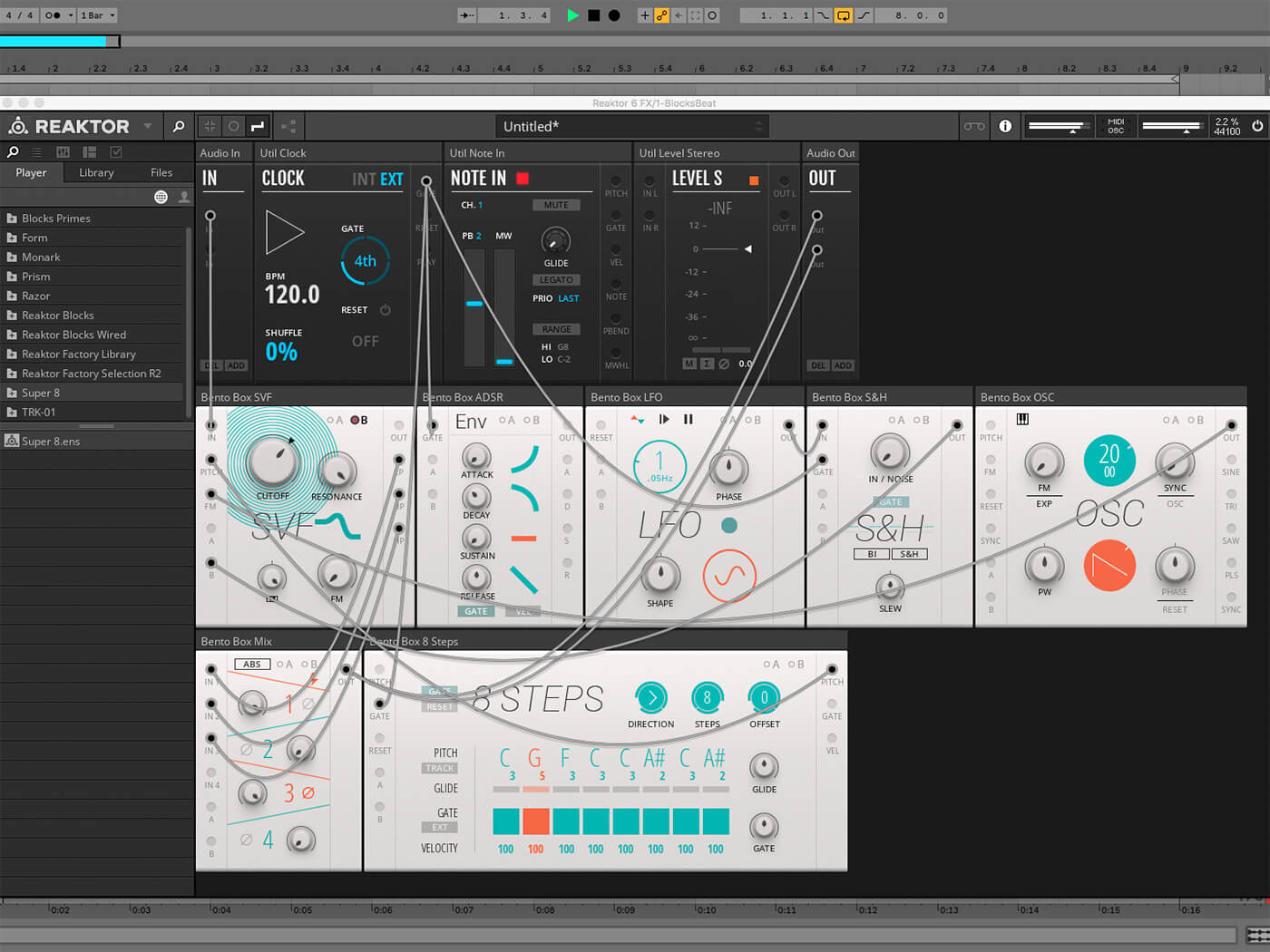 Now on playback, you’ll hear the filter cutoff frequency move with each note on the step sequencer.

We’ve added a lot of stuff to our filter, so let’s create a clean ‘initialised’ version of that patch as a starting point for audio processing.

First, we’ll reconnect the ADSR to the SVF Filter’s Mod input A, and turn down the Mod A to Cutoff Modulation amount. 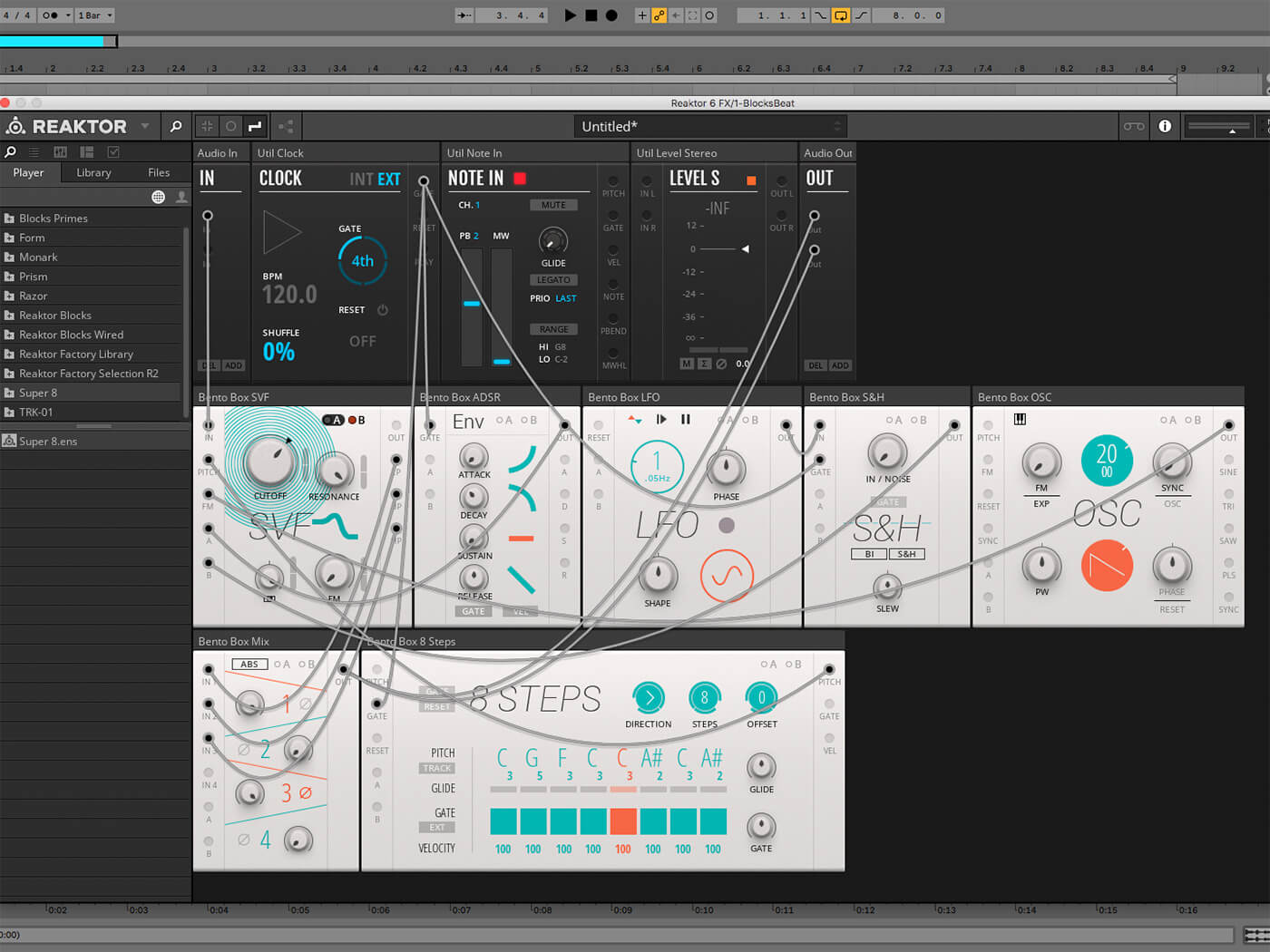 Next, click the Invert button on the Mix’s input 3, and turn down Input 3’s level as well. 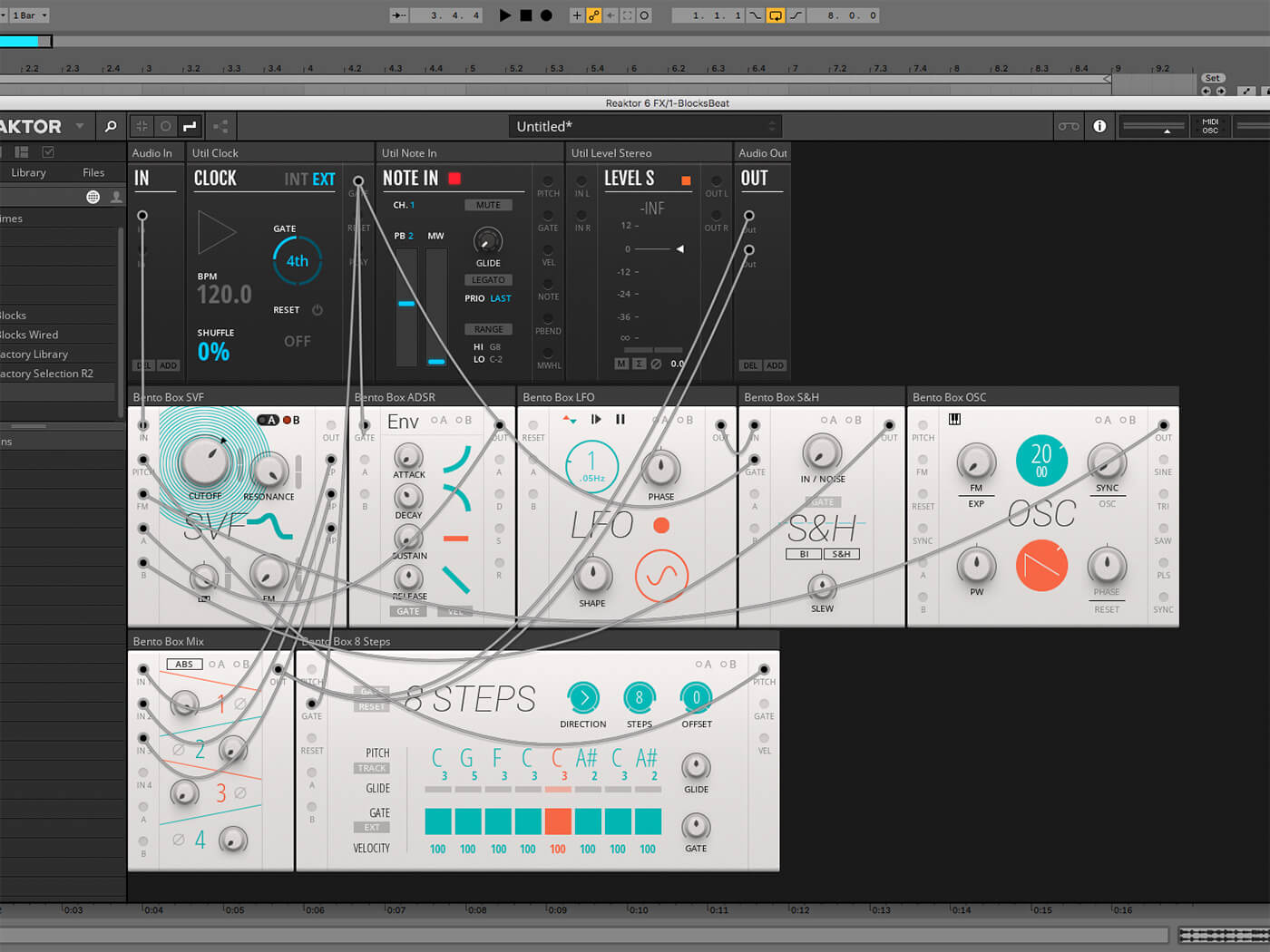 Set all the Pitch values in Step 8 to C3, you can do this by double-clicking them. 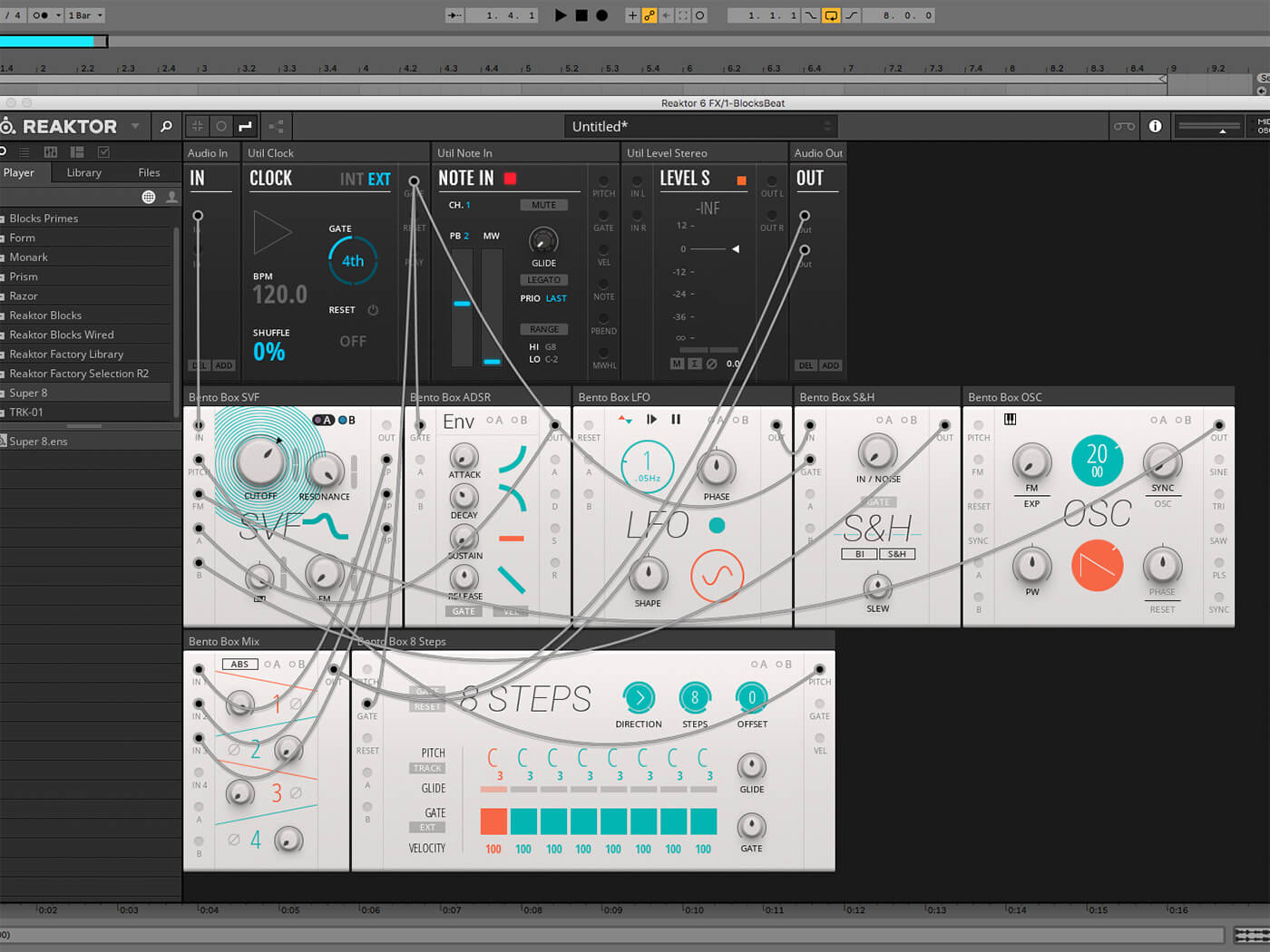 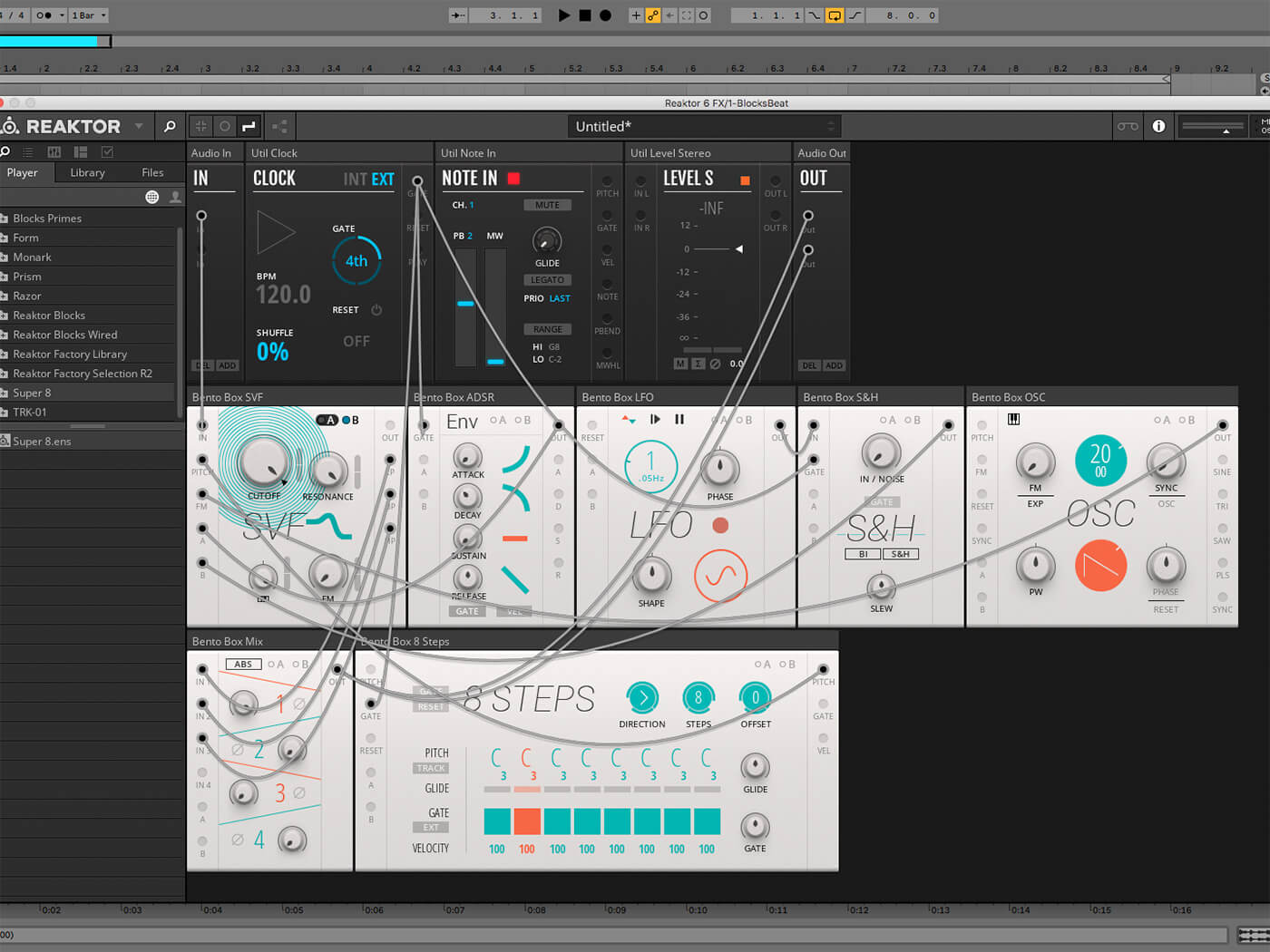 Let’s save our Reaktor patch using File > Save As. Now we can bring up a clean version of the effect any time we like! 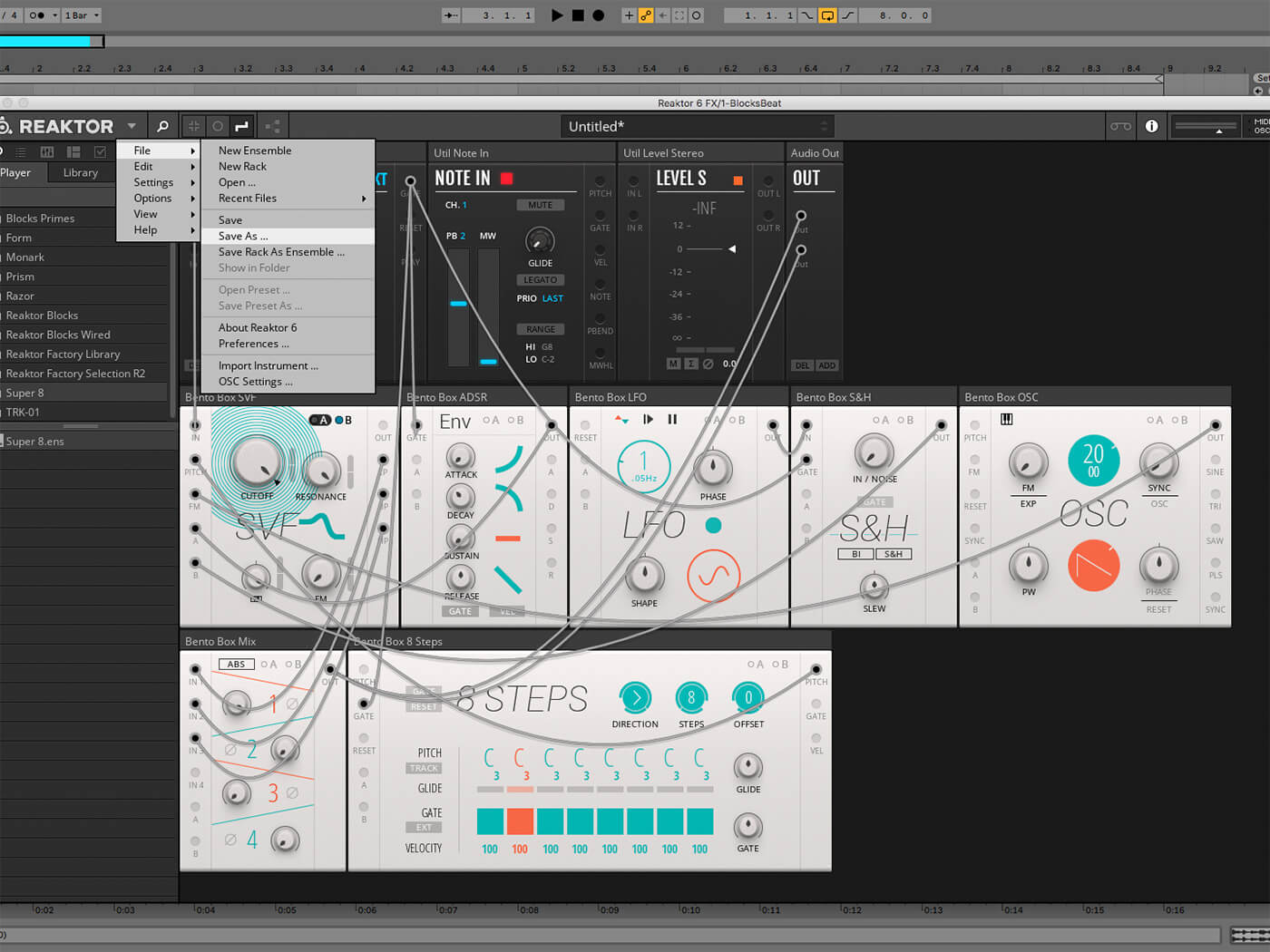 And, if you’re not sure you’ve hooked everything up correctly, you can check out this saved version of the Reaktor project here to double-check.

Don’t forget to check out our past Weekend Workshops as well, and look out for more in the coming weeks. If you’re looking for more inspiration, check out our brand new 30-Day Production Challenge!