Take your productions out of the box and add some analogue vibe without breaking the bank. 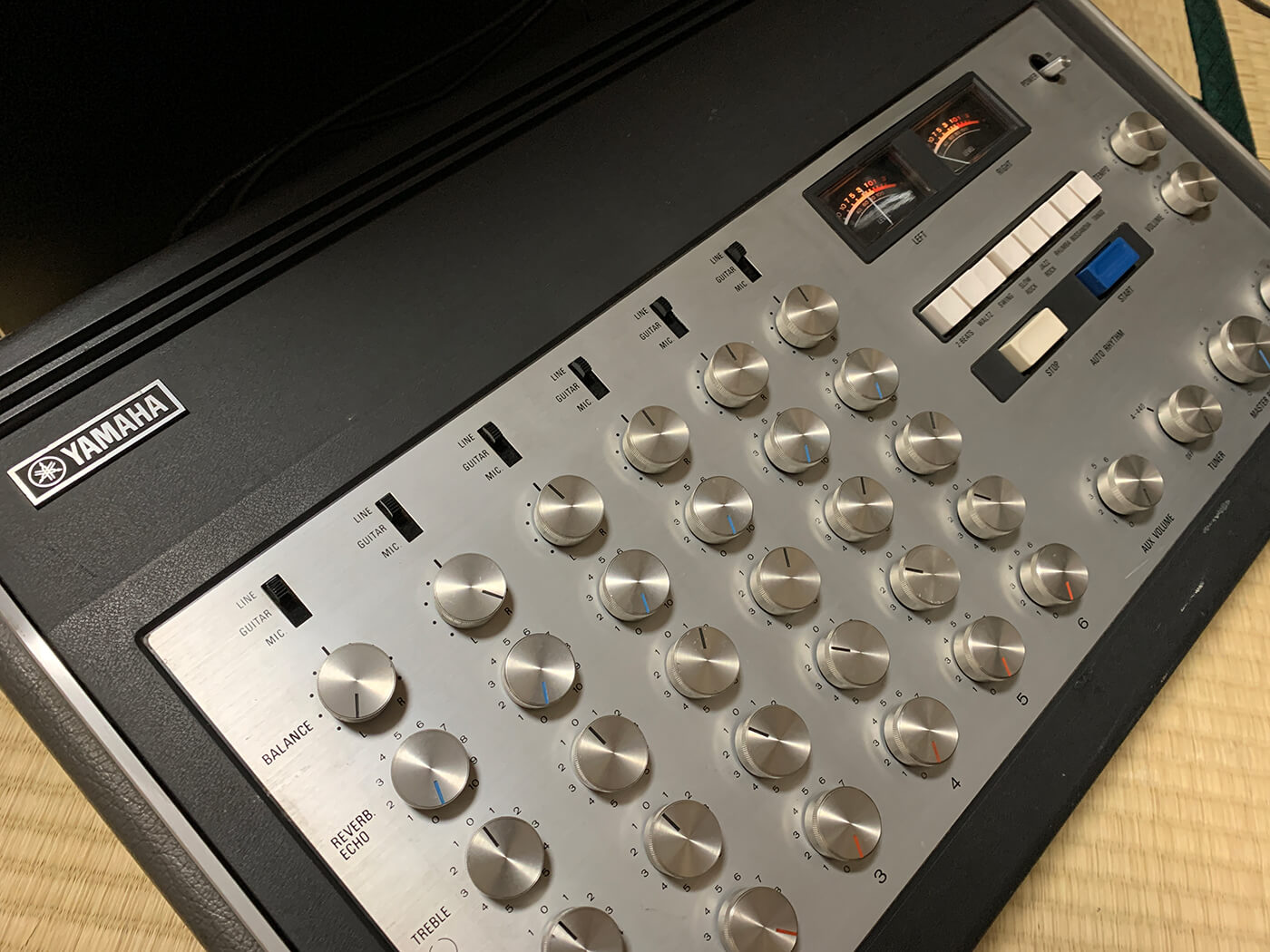 As computer-based musicians, many of us tend to keep our productions entirely in the box. While this is convenient, there’s also something to be said for taking your signal out into the real world and passing it through some analogue components, particularly a vintage mixer. The warmth, saturation, and general mojo that analogue circuitry imparts on a sound can be a truly wonderful thing. It’s also a lot of fun, as we’ll explore in this piece.

But isn’t analogue hardware expensive? It doesn’t have to be. Sure, you can end up paying more for a classic Neve or SSL desk than you would a new car, but we’re after something a little more unique. There are plenty of vintage mixers out there for low prices that may not cut it as the centrepiece of a studio due to age and other imperfections. However, these mixers can still impart some vibey character to an otherwise sterile digital signal when used as an effect.

In this article, we’ll explore how to use a less-than-perfect vintage mixer to add analogue summing saturation to your DAW workflow. We’ll go from cold DAW audio like to characterful and warm.

Fewer producers these days are using mixers for routing hardware equipment. But many have realised that they make great saturation units. While any mixer will imprint its characteristics onto a signal, we find that older and well-used units from the 70s and 80s sound particularly vibey, especially when overdriven. Also, check out old DJ mixers, microphone mixers, and other cast-offs for similar analogue inspiration.

Today we’re using a Yamaha EM-170 mixer for summing. It’s from the early 1970s and gets interesting when pushed into the red. It also has some very serviceable EQs. This tonal control is another bonus when using a mixer as an effect. It’s also a little noisy, but that’s just part of the effect. 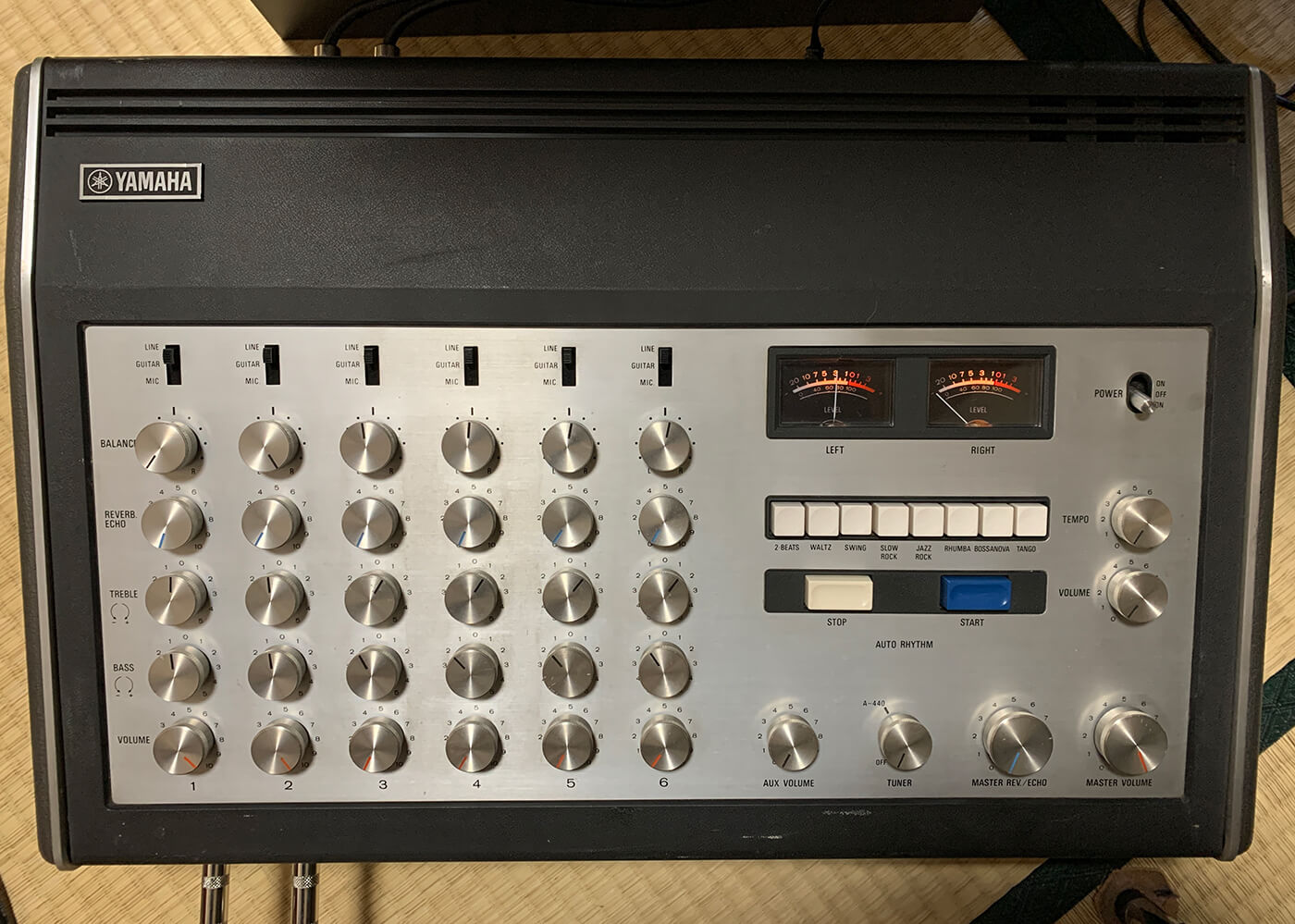 Let’s get things wired up so we can use our external mixer as a hardware send device. We’re using Logic Pro X as our DAW and a first-gen Focusrite Scarlett 8i6 as our interface. Don’t worry if your setup is different, as the principles will still apply.

First, we need to create a send loop from our interface to the mixer. We use the second pair of outs (3/4) on the 8i6 and connect them to the inputs of the EM-170 mixer. We then go from the mixer’s stereo outs to interface inputs 1 and 2.

Next, depending on your interface, you may need to do some internal routing as well. For example, we need to use Focusrite Mix Control to ensure that DAW outputs 3 and 4 are routed to the appropriate interface outs.

Finally, let’s set up a send loop in the DAW. First, we’ll check latency. We can use the I/O plug-in to ping our loop and see how long it takes the signal to make the round trip. It’s pretty short (only 23 samples), but we’ll adjust the recording delay in the audio preferences to get it as close to zero as possible. Now we can disable the I/O plug-in because the system will handle latency compensation.

We have a piece of electronic music here made exclusively with plug-ins. We haven’t applied any effects yet as we want to show how transformative summing through a vintage mixer can be.

Let’s try this very digital pad first. It was made using Roland Cloud Zenology running the JD-800 emulation. It doesn’t get more digital than that. 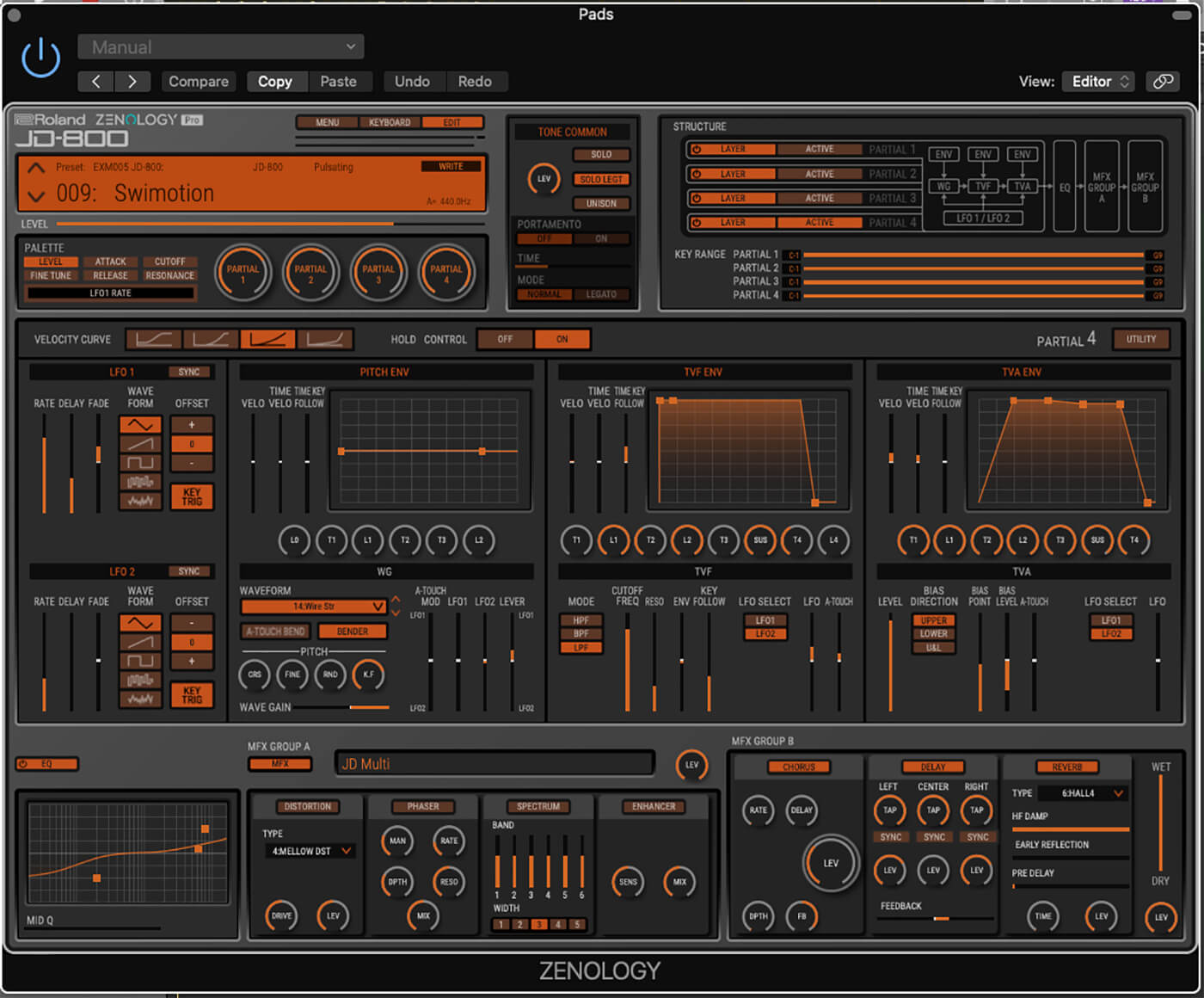 We create a destination audio track where we will record the post-mixer signal. Next, we set up the routing so audio goes out from the Zenology plug-in instrument via interface outputs 3 and 4, through the mixer, and back to the audio track through inputs 1 and 2. We arm the track, hit record, and capture the summed audio.

The result is quite a bit warmer and fuller than the original.

Next, let’s do the same with a bassline but push the signal hard to get some distortion. We’re again using Roland Cloud Zenology, this time with a bass sound made in the SH-101 emulation. 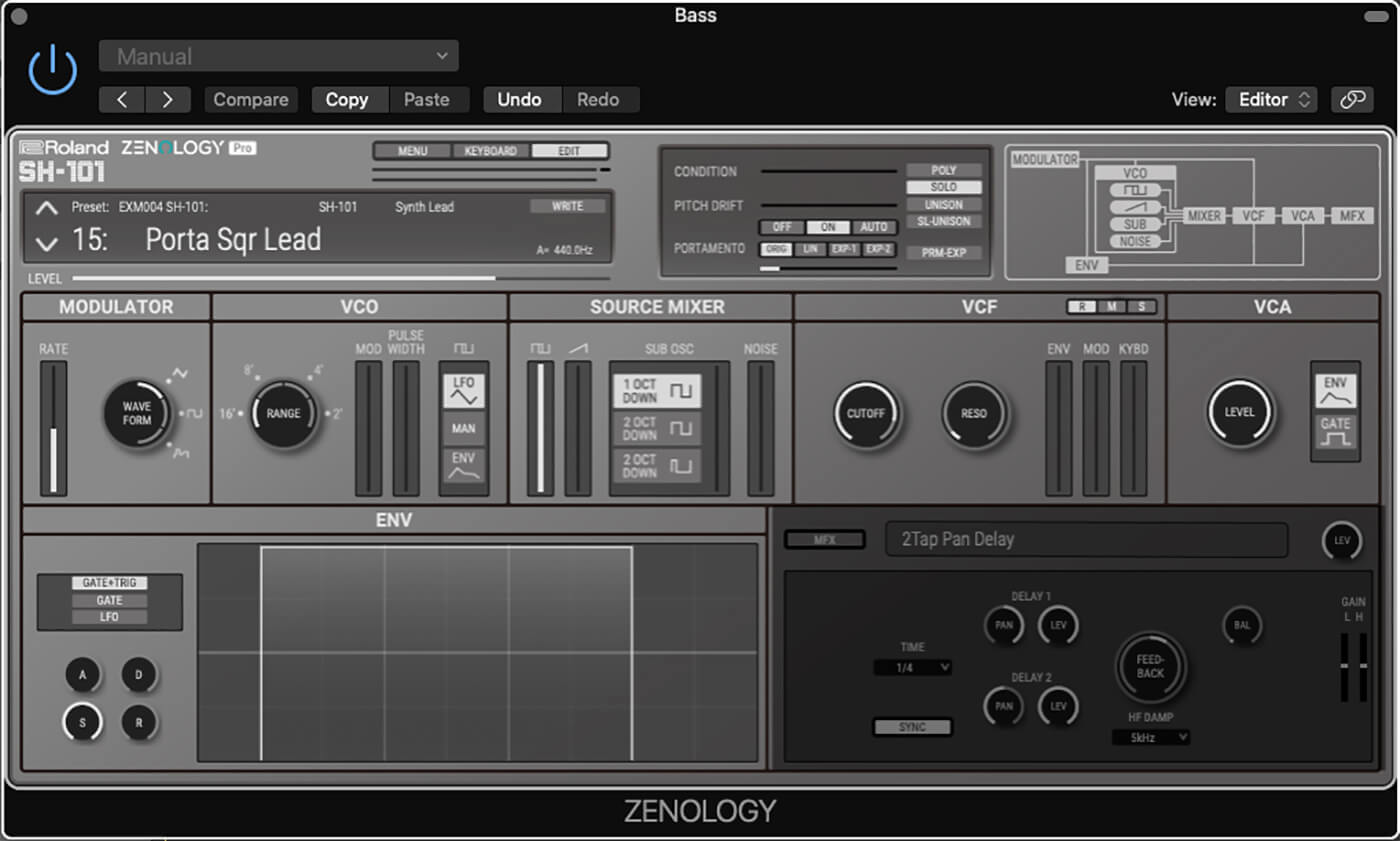 We again route the virtual instrument audio to the input of a new audio channel. We can change the input type from Line to Guitar on the hardware mixer to boost and overload the signal. We can also use the onboard high and low EQ pots to boost the lows and highs. 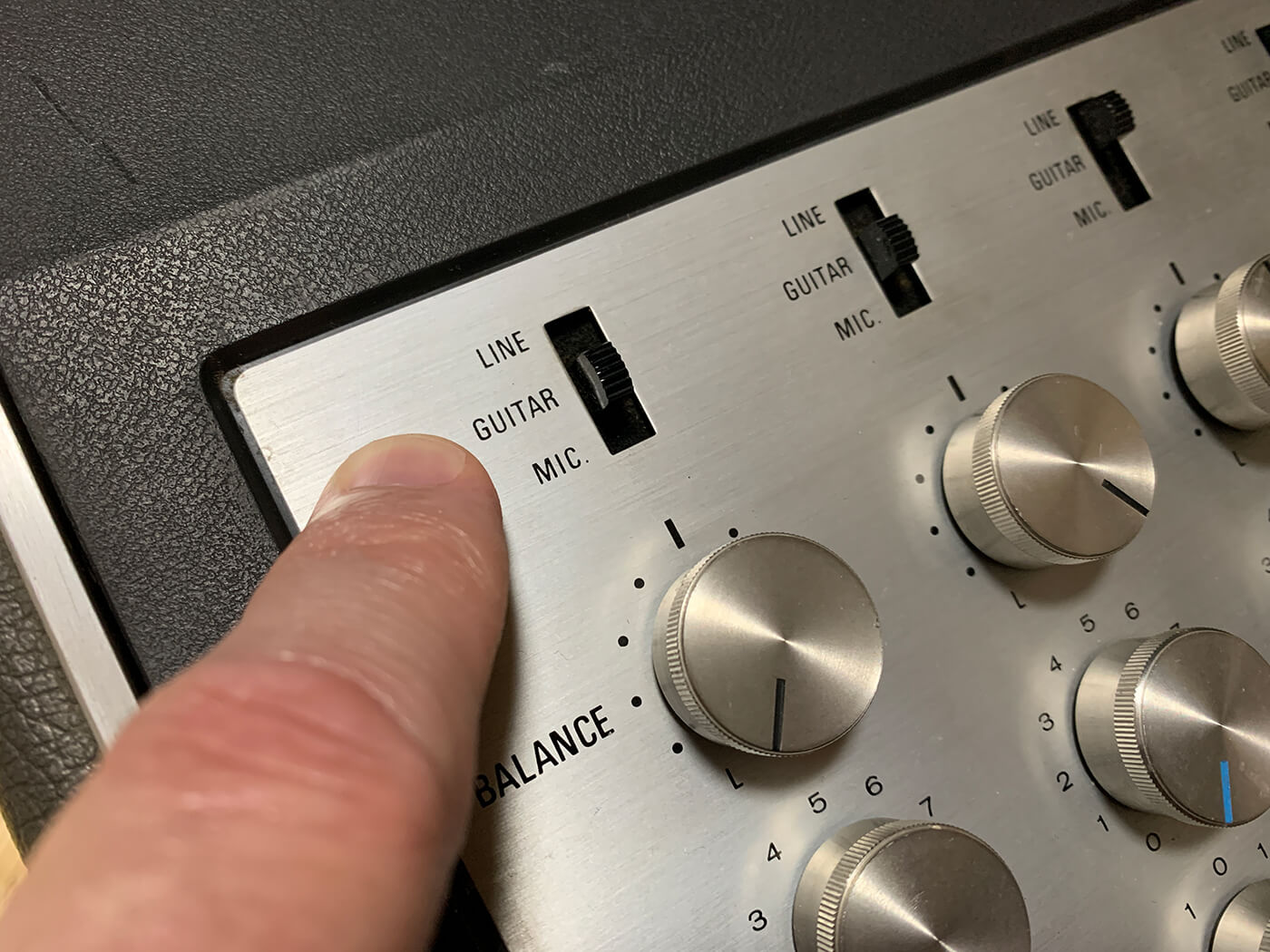 Our new bassline has more punch and vibrancy than the original, and all we’ve done is sum it through an old mixer.

Finally, let’s see how summing a drum bus through an external mixer can help glue the different sounds together. We have a disco rhythm comprised of a kick and tambourine from Native Instruments’ Studio Drummer and a pattern from Roland Cloud’s TR-606. The acoustic drums are warm but a little lifeless, while the TR-606 is just the opposite: bouncy but overly bright and thin.

Before we record the audio, let’s change the hardware mixer back to line inputs – this will drop the input level. We don’t need to destroy the sound, but just give it some warmth and glue. We can also use the EQ to shape the tone, with a slight boost in the high frequencies and a dip in the lows. We again create a new audio track and, this time, route the outputs of our drum bus through the mixer.

Here are all three of the saturated tracks together. From this point, we can start using effects plug-ins like EQ and compression to shape the audio further.