The Live 10.1 public beta is underway, and there won’t be further additions before the final release. There are new effect Devices, and one significant alteration to the Wavetable synth. We lay out the changes. 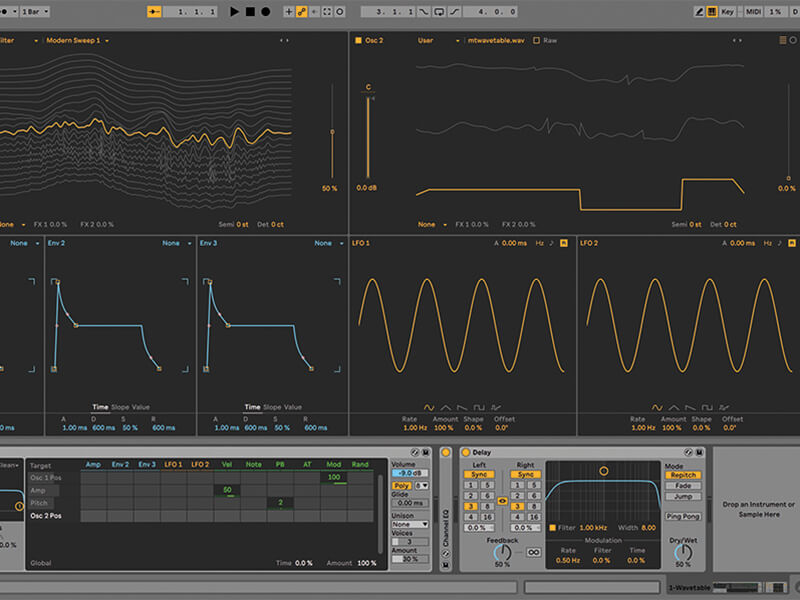 If you read our review this issue, you’ll know that Ableton has released a public beta of Live 10.1. Who knows, by the time you read this, it might have had a final release. Probably not, though, as Ableton can be cautious.

10.1 introduces fixes as well as a few features and even some major changes with the Devices. The Wavetable synth, included with Live 10 Suite, now has the ability to load user-created waveforms. The previous Simple Delay and Ping Pong Delay audio effects have been combined into a new single device – the functionally named Delay – and Channel EQ joins EQ Three and EQ Eight in the toolkit for all versions of 10.1.

That Wavetable update is big news for anybody who was frustrated by Ableton’s walled-garden approach to wavetables – you had to use theirs, and that was it – not good if you’re used to synths like Serum, where creating them is an integral part of the process. With this update, it’s a chance to spend time learning about wavetable synthesis, so let’s try a simple explanation.

Every synthesizer has at least one oscillator – the component that generates a waveform. This could be created through synthesis, or derived from an audio sample. A wavetable synth also uses oscillators, but each oscillator can contain a number of different waveforms at the same time. Controls such as LFOs are then used to sweep between these waveforms as the synth plays, which can create far more interesting textures, even before any other parameters or effects are touched. Such a collection of waveforms is a ‘wavetable’.

So in Live’s Wavetable synth, you have individual waveforms, which are collected as wavetables, then the wavetables are loaded into oscillators, and a combination of these, along with filters and LFOs and other synth components, is a preset.

If you want to, you can simply drag individual samples into Wavetable, but you’re not really making the most of the potential. Wavetable, like Simpler and Sampler before it, has an expanded view available (hopefully, that’ll come to Operator some time, too). When you’re working with something as complex as Wavetable, the extra space makes all the difference.

Creating and modifying the necessary wavetables can be a mysterious process, but thanks to Max For Live, we can do it inside our projects thanks to a free Device called Wave Weld, available here. As mentioned in the walkthrough, no previous experience is necessary, just work that Random section!

As well as the wavetable synthesis components, Wavetable includes modulation tools. With two oscillators and two filters – which can be automated within Wavetable by using the Modulation Matrix – you can then give it motion by assigning LFOs or envelopes. Just click on the parameter, and it’ll be added to the grid. It’s very important with wavetable synthesis to get some movement going on the wavetable positions. Next to the Modulation Matrix is the MIDI Matrix, which works on the same basis, but uses incoming MIDI sources such as velocity and pitch.

Other devices changes in 10.1 aren’t so eye-catching, they’re more like house-keeping jobs. There’s Channel EQ, which is fairly self-explanatory; you’ll be familiar with EQ Three and EQ Eight, and this one sits between them in terms of simplicity and function, with low, mid, and high cut/boost, an 80 Hz high pass filter, and an adjustable mid frequency. It’s a very tidy layout, and likely to become the go-to EQ for many situations.

While Channel EQ complements Live’s existing EQ effects, Delay replaces the previous Ping Pong and Simple versions – there was a bit of duplication, what with the Echo effect added in Live 10, too. Special mention goes to the fabulous Repitch Mode, which changes the pitch of repeats with project tempo, or beat-division changes. Try applying different LFOs to one of, or both, of the left and right repeats – it sounds amazing if you map a slow LFO,
like a sweep over a few bars.

These are all solid developments, continuing Ableton’s habit of adding features to point updates. Wavetable customisation is big news for Suite-using sound designers, while everybody can appreciate the simplicity of Channel EQ and Delay. The only thing I’d caution about is that this tutorial is based on the Live 10.1 beta, rather than the final release, so don’t do anything critical that’ll depend on it! 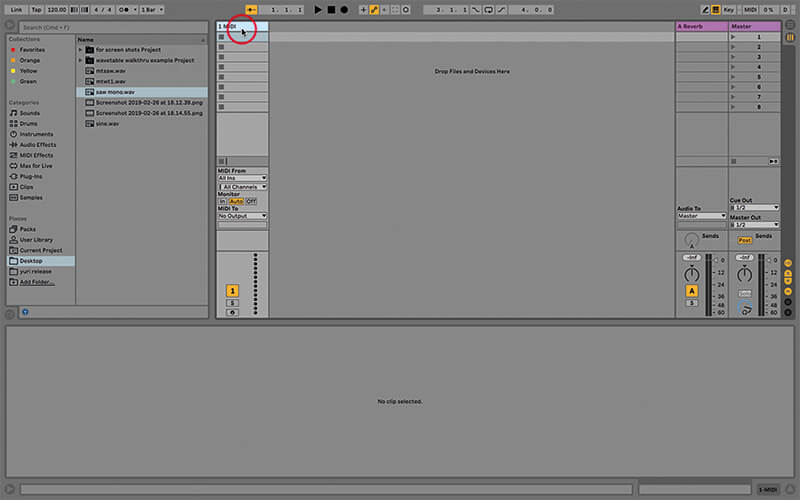 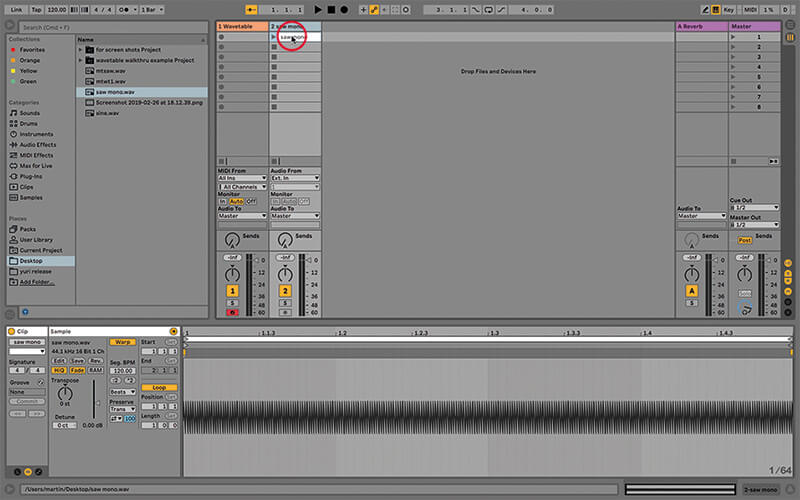 2. We have an example Ableton Live 10.1 set for you to experiment with. All the set contains is a short audio sample we’ll use later. You will also need Max For Live installed to use it. 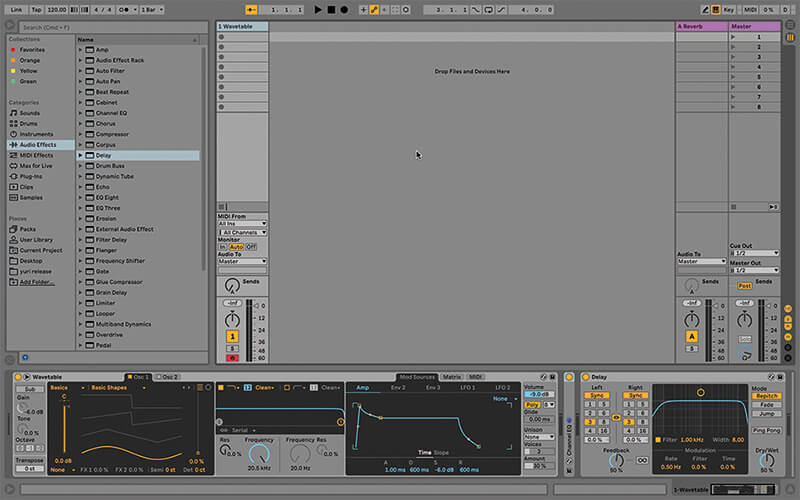 3. Drag the Wavetable default from the Browser/Instruments section into the drop area; it’ll make a MIDI track. Follow that with the default Channel EQ, and then the default Delay. That shows all the new Devices. 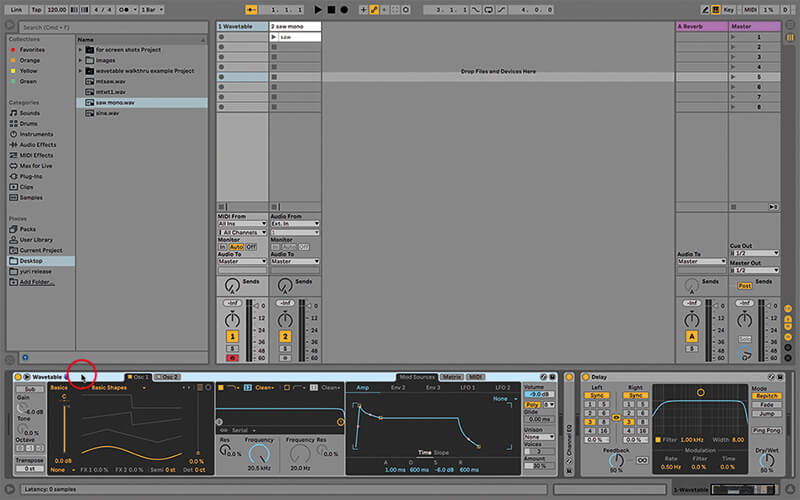 4. Let’s begin with Wavetable. This synth can now import user samples and wavetables (not quite the same thing – read on) as the basis for new sounds, so let’s get on with the tweaking. 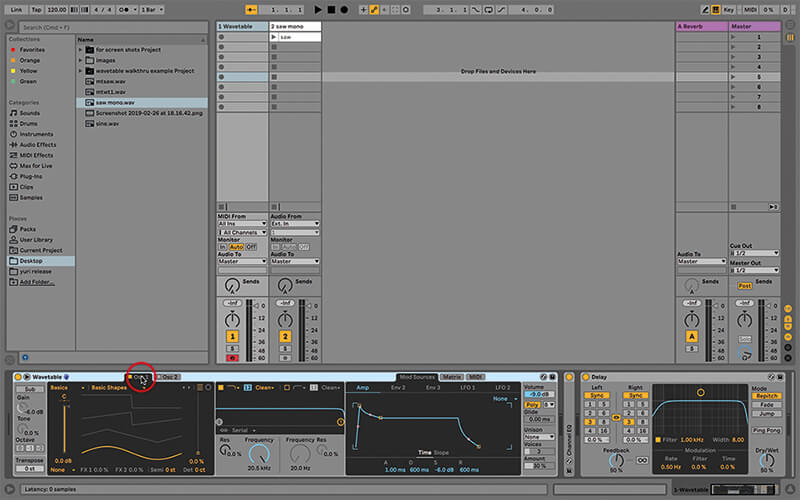 5. Wavetable has two oscillators that we can combine to create more exciting textures than just the plain sounds. Click on the Osc 1 tab above the waveform display. Osc 2 is off by default. 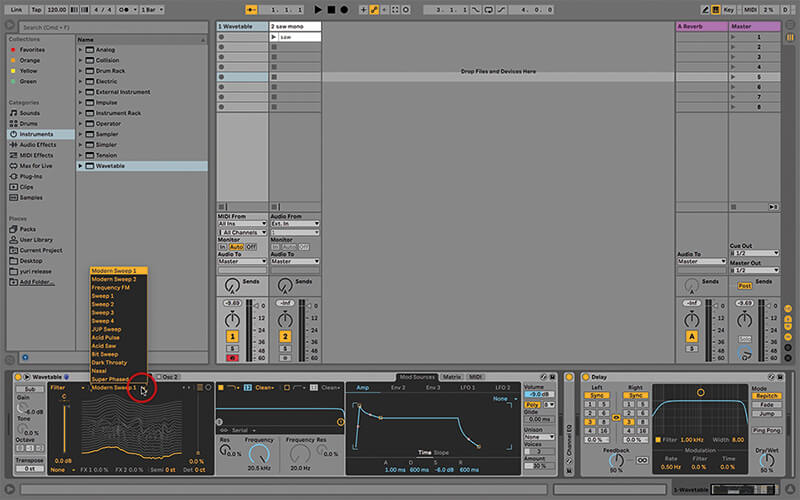 6. Play some notes and you’ll hear what we mean – the default Wavetable is a straightforward sine. Click on the Wavetable Category list under the Device Name and choose Filter. From the list next to that, choose Modern Sweep 1.

BETA BLOCKER The 10.1 beta is now open to all – well, anybody who has a full licence for Live 10 already. But you should be aware the beta will time out at some point – you’re not getting a free one! It’s also safe to install alongside Live 9 or 10. 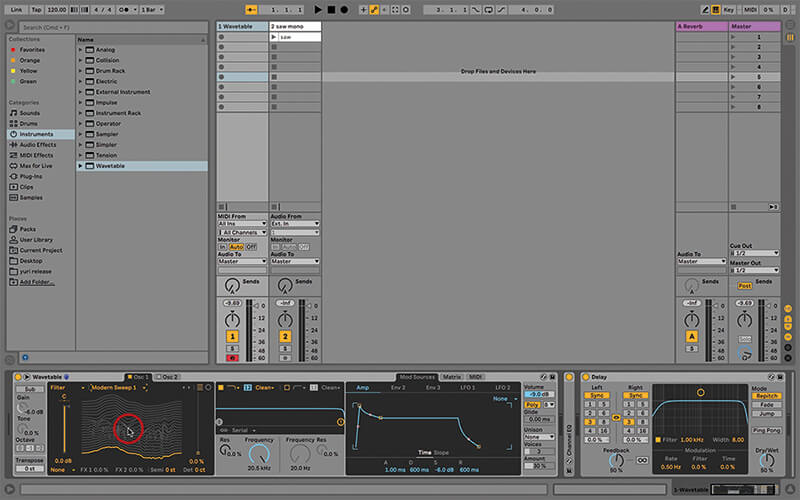 7. Oscillators on wavetable synths are different than those on other synths. In wavetable synths, each oscillator uses a wavetable, which can be one sample, but is more often a collection of samples that are used together. 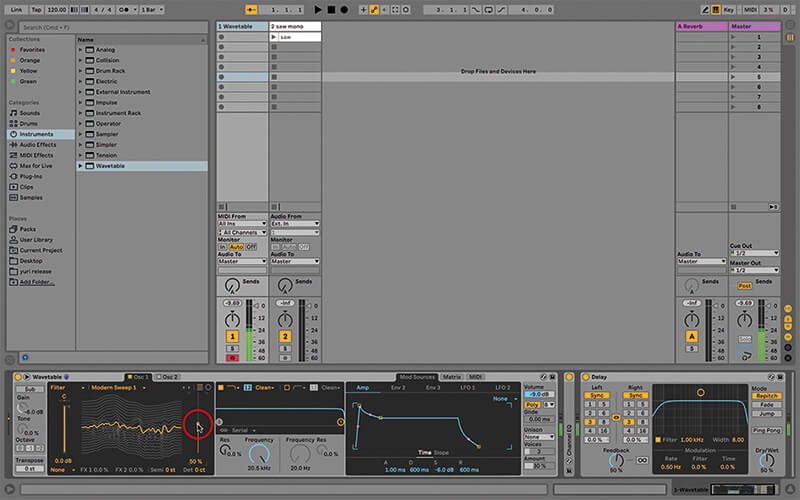 8. While playing some notes, grab the vertical Wave Position slider at the right of the wavetable position, and move it up and down. You’ll hear (and see) what happens as it moves between waveforms. 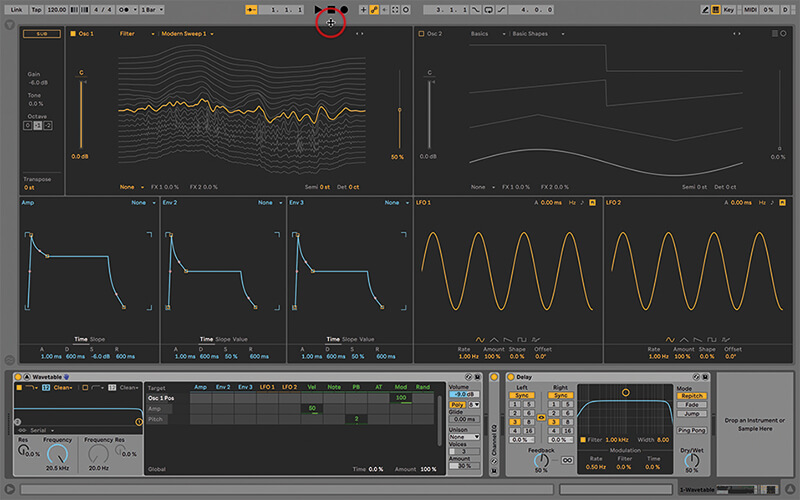 9. It’s time to click on the small triangle next to the Device On/Off switch, opening Wavetable’s expanded view. Make the most of it – close your Browser, grab the top edge of the display and drag it right up to fill the screen. 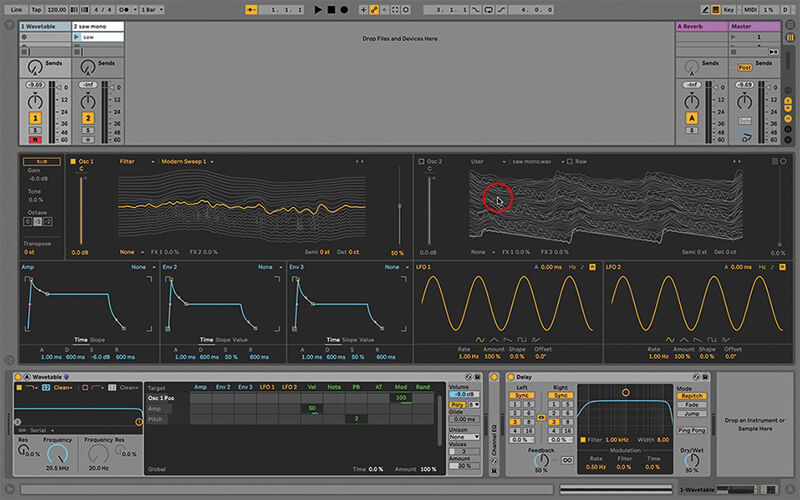 10. Click on Osc 2, and drag the example audio sample (Saw) straight onto the waveform display. You can use the Position control to move through the waveform, but it’s not as dynamic as the first one. 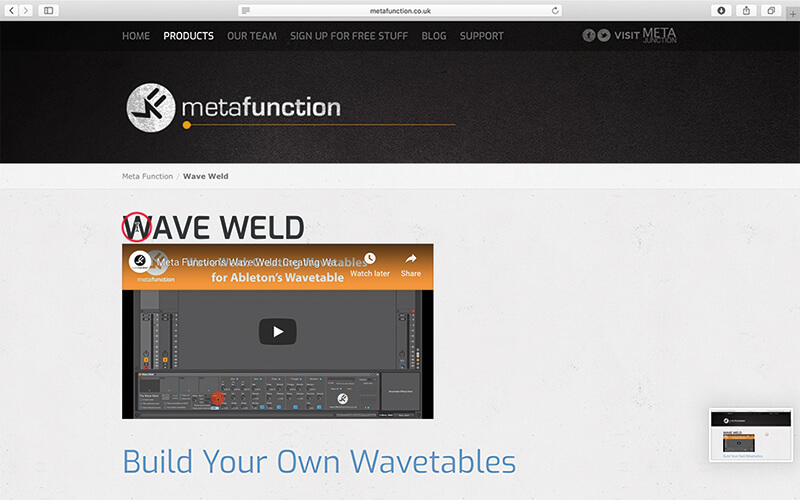 11. Go to metafunction.co.uk, join the mailing list, then get the free Wave Weld Max For Live instrument. Add it to a MIDI track in the Live set. It’s not an instrument, really – it’ll help us create custom wavetables. 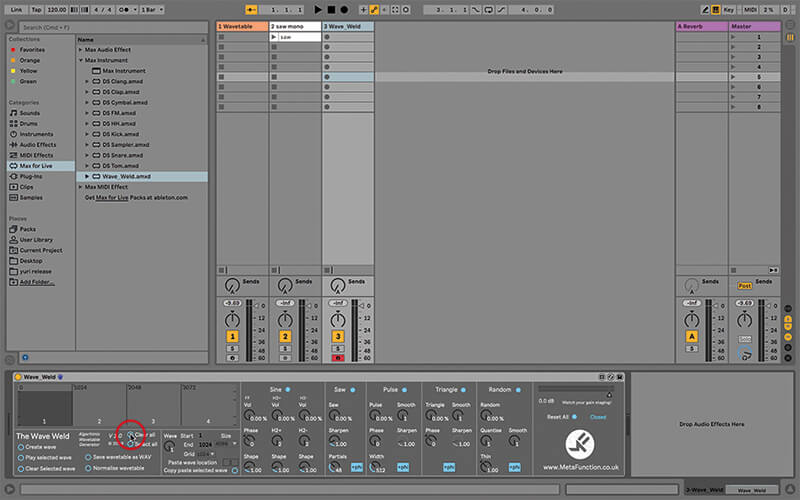 12. Click the Clear-all button, wiping clear the Wave Weld display. Set the Size control to 4096 samples, as recommended by Meta Function for Wavetable use. Set the grid size to 512 for each waveform within that 4096.

A SINGLE CYCLE Drag any audio sample into Wavetable and it’ll make a noise, but you’ll be better served by using samples (wavetables) created specifically for the purpose. All you need is one cycle of the chosen sample waveform, made with any audio editor. 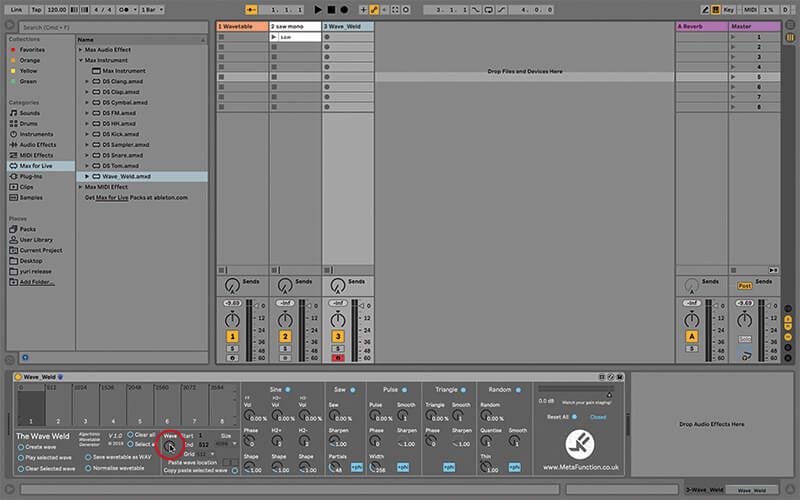 13. Currently, Wave Weld won’t make a sound. Let’s use the Wave control to select any one of these eight slices and build a waveform for it. Let’s randomise them all! Use the Wave button to select slot 1. 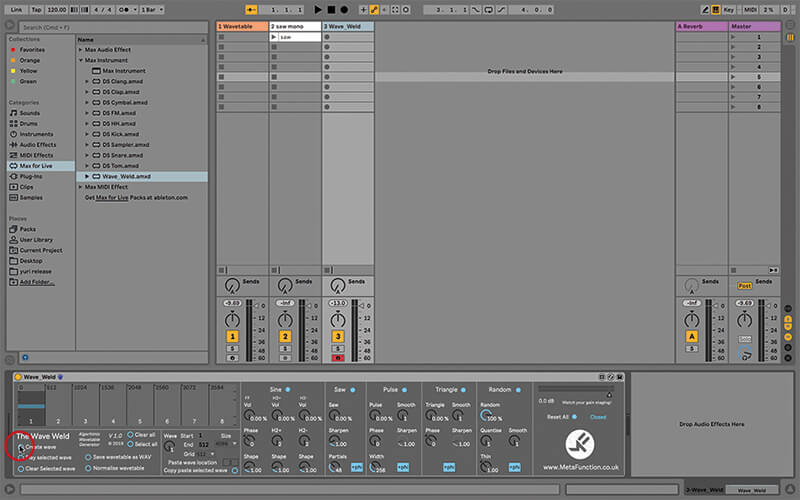 14. At the far right, bring the Random value to 100%. Don’t touch any other controls. Click Create Wave and a new waveform will appear in slot 1. Repeat this for all slots, experimenting with the Quantise, Smooth and Thin. 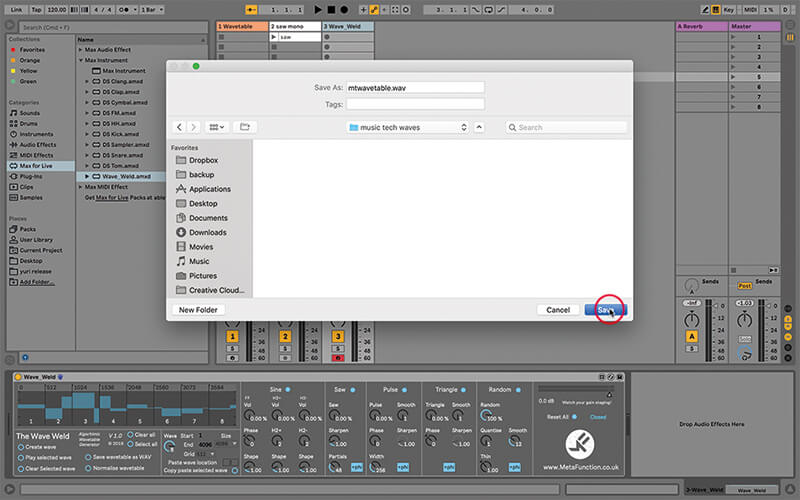 15. If a slot’s highlighted and you play a note, that’s all you hear. Use the Select All button to hear them all. Click Save Wavetable as WAV, and export it. You can add this to Wavetable’s Osc 2, overwriting our first sample. 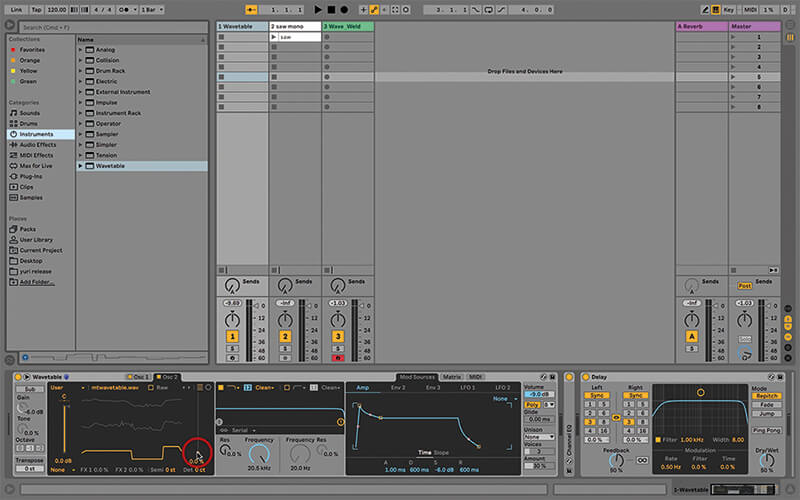 16. Look at it, listen and use the Wave Position control to sweep through the waveforms you’ve created. Turn each Osc off and on so you can hear them interacting. Spend more time with Wave Weld – it’s a great utility. 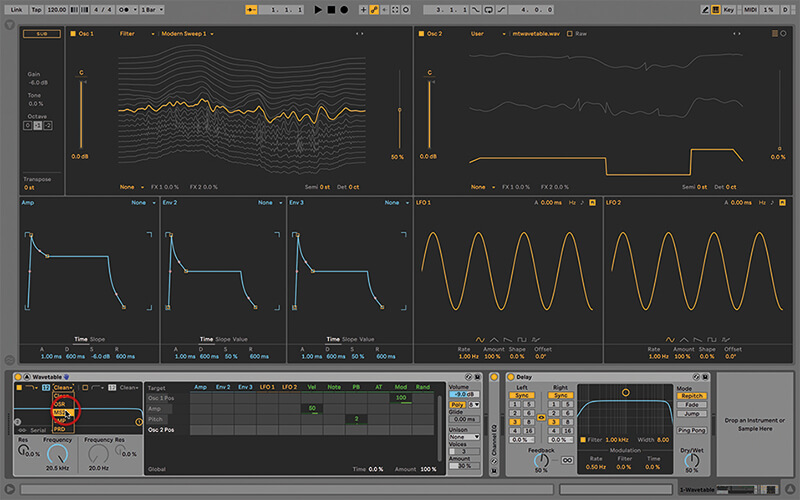 17. We haven’t even mentioned Wavetable’s powerful and creative filters, and the Modulation Matrix. These add the finishing touches and yet more movement to your preset. Take a look at our main text for more about these. 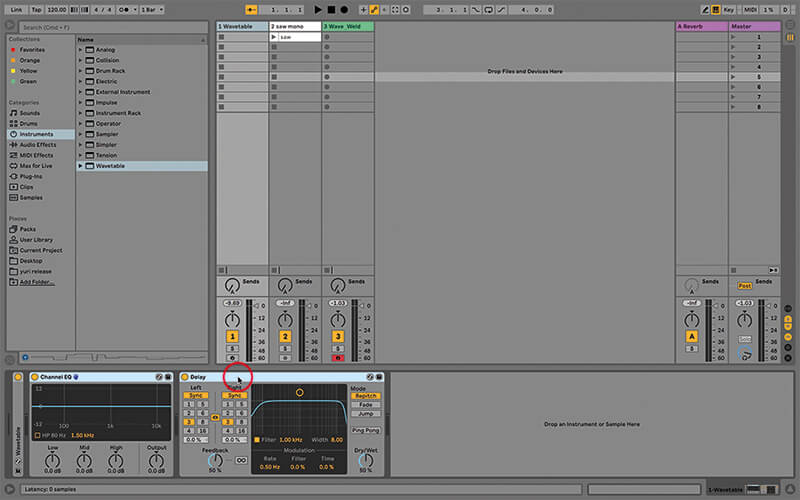 18. Likewise, see the main text for the details on the new Channel EQ Device and the new Delay, which makes a fine complement to the Live 10 Echo tape-delay-style Device.