How to Link and sync with Ableton Live

Live works brilliantly on its own for production/performance, but it can also be incredibly sociable and open to working with other software and hardware. Here are a few ways to hook it up. 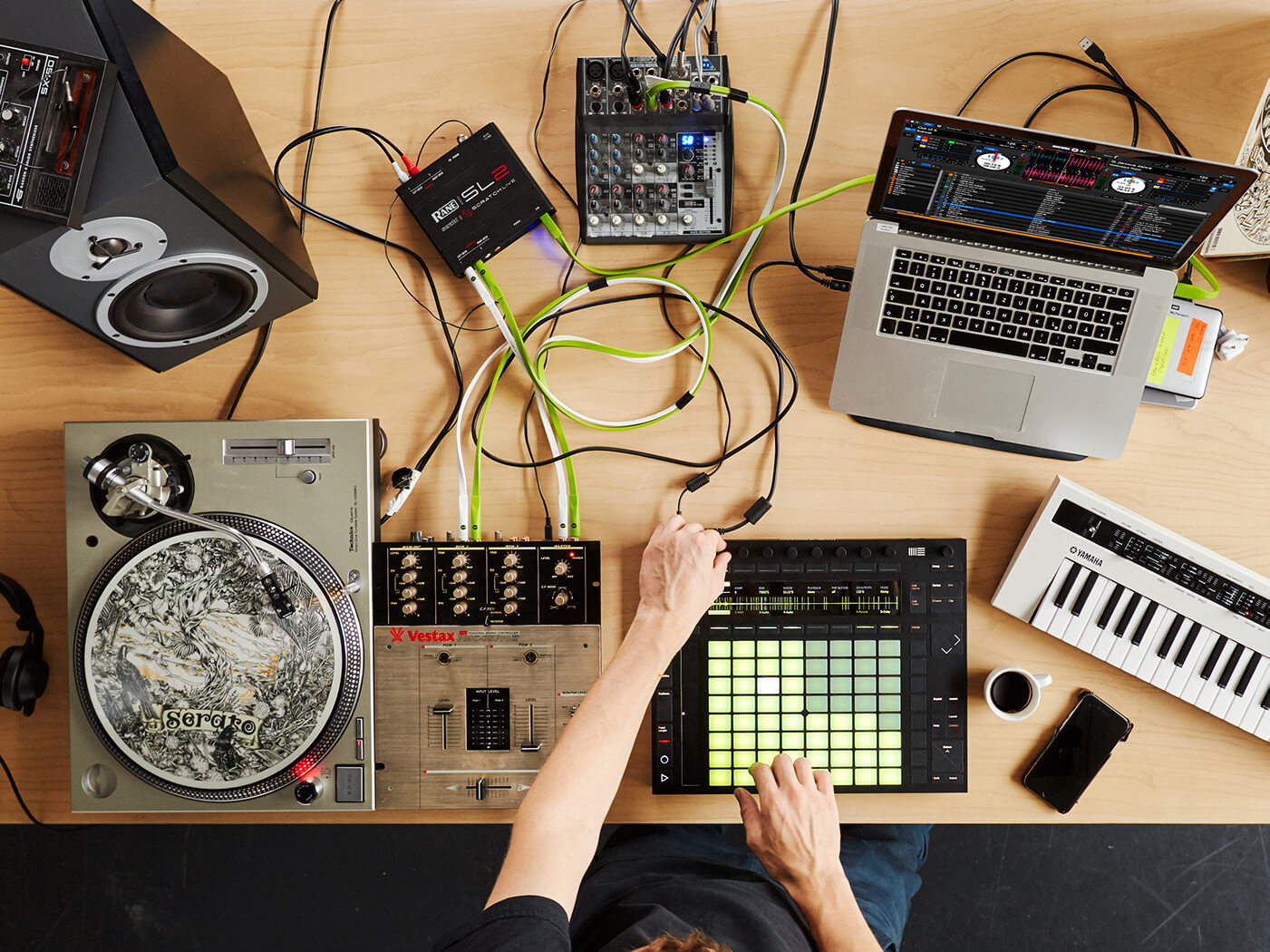 With Live 9.6, Ableton introduced Link, a sync solution that works via WiFi or Ethernet. Link is reliable, and super-easy to understand and to configure. Over time, it’s appeared on ever more software, from Bitwig Studio on macOS/Windows, to Korg Gadget on iOS, while also encroaching into the ‘real world’ through Akai’s new Force hardware. No extra purchase or install is required, and that’s a crucial aspect of what’s made it popular.

Link to the past

The great thing about using Link is that you probably won’t need to add any more software or apps to try it, because it’s included with so many. If you really get stuck, find an iOS/Android app, or grab the Live demo or VCV Rack (an open-source virtual modular synthesizer) and put them on another computer. Come to think of it, you could even Link VCV Rack to Live on the same computer.

As we point out in the walkthrough, it’s often better to rely on Ethernet for an important gig, but that’s usually down to the up and down nature of WiFi rather than any reservations about Link itself. Since Live 10 added the ‘Start Stop Sync’ option in Preferences, Link’s been adopted by even more musicians – that was one feature many of us requested – the ability to start and stop all our sync’d gear at once.

It’s good to have the option to turn it on or off, though. One of Link’s strengths is that there’s no longer a sync master/slave relationship, which is always something to deal with if you’re using ReWire, where it’s impossible for the software to exit the setup without everything else falling over at the same time.

With Link, however, it’s very democratic. Anybody can start, stop, join, leave, change tempo… and it just keeps rolling. In the walkthrough, we refer to a very specific setup, consisting of Ableton Live 10, Akai Force and Arturia DrumBrute, but that’s purely because of what we had to hand at the time. The Force was the first hardware piece I’ve encountered with built-in WiFi and Link support; it also has MIDI and CV/Gate, so it’s perfect for testing such setups.

Link jams are very easy amongst friends, all you need is a quiet-ish space, a bit of table or floor, and you’re off (by the way Ableton hasn’t stated any limit on how many devices can play at once). Even if you have to beef up the audio a bit, you can use a battery-powered mixer and some battery/rechargeable speakers, which will have the fringe benefit of making the jam easier to record as well. If all you’ve got is phones and tablets, no problem. Ableton has kept Link open, so it doesn’t even need Live to work.

While we’re talking about sync, let’s just remember that one of the cool things about Live is that sync within projects is flexible. Everything in Live can be locked to project tempo, to a robotic degree if required, but if we take LFOs for example, each one has the option to sync with note values, or to manually set the LFO cycle to Hertz, which will behave in a more old-school way, and drift over time, if you set it by ear. This is great for adding an organic quality to your synth sounds.

Link is not for every occasion; it’s focused on doing just one very important job. Something like ReWire will give you sync, as well as audio and MIDI routing between two applications running on the same computer. It’s a great way to treat a pair of applications such as Logic Pro X and Live, or Live and Reason, as if they’re one enormous DAW, and lets you exploit the best of each.

Of course there’s a huge trade-off there in terms of complexity, demands on computer resources, and frankly, your brain, as you try to keep track of what’s going across not one but two complex pieces of software. ReWire can also introduce issues in terms of assigning hardware MIDI controllers to the desired parameters. Though ReWire is powerful, Link gets you started fast.

Link is a fantastically straightforward sync tool, and it’s free, and it’s not dependent on any particular product. Ableton has brought a lot to the world of music creation and performance, but Link feels like it could potentially be the most useful and important of all. 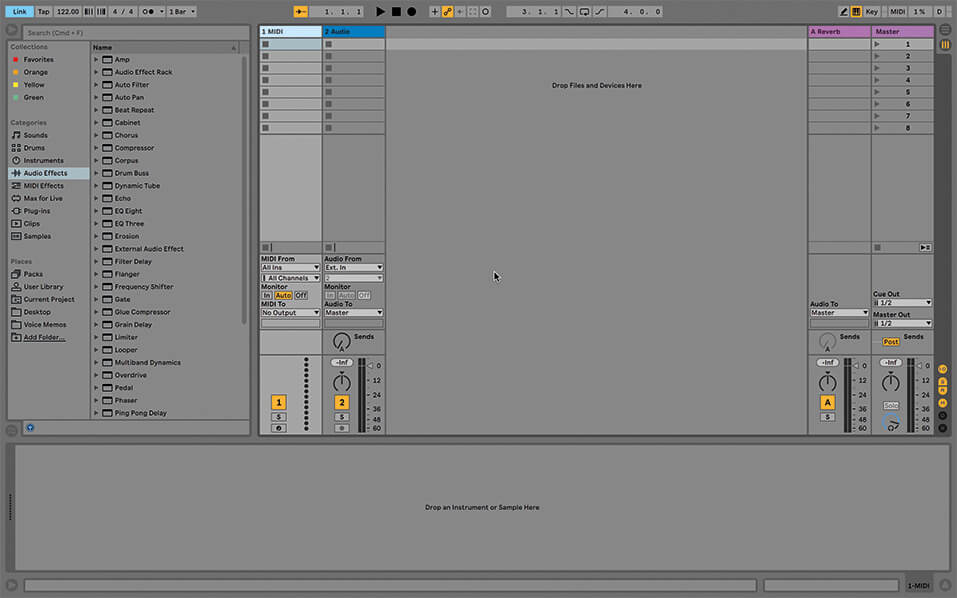 1. Ableton Link is a very simple, cable-free way to synchronise the timing of Live and other music devices over a WiFi network. For this tutorial, you’ll need a computer running Live, and at least one more Link-capable app or piece of hardware. 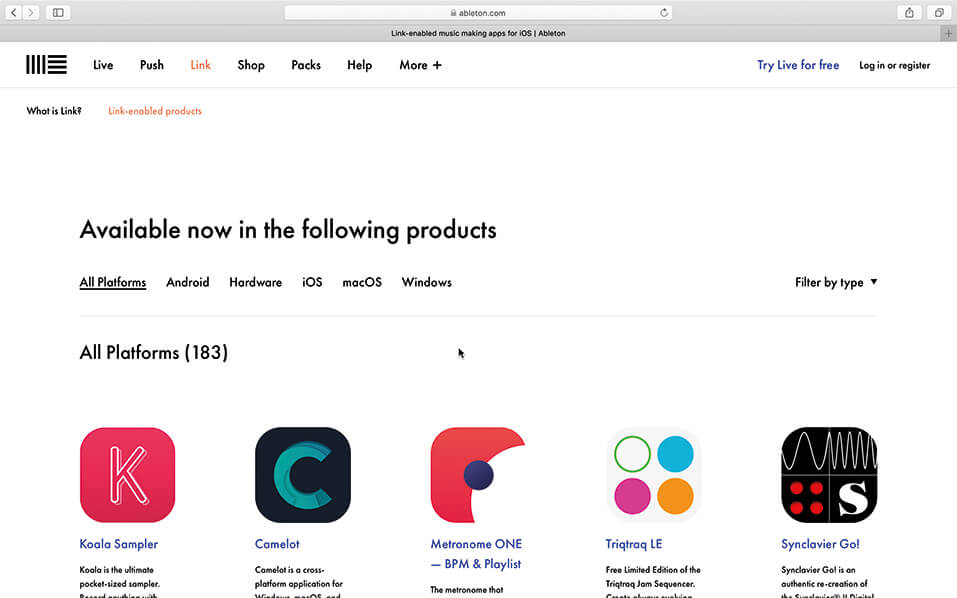 2. Link is available for software running on macOS, Windows, iOS, and Android, as well as some hardware. Visit this page to see a list of available apps across these platforms; some are free, so there should be something you can try. 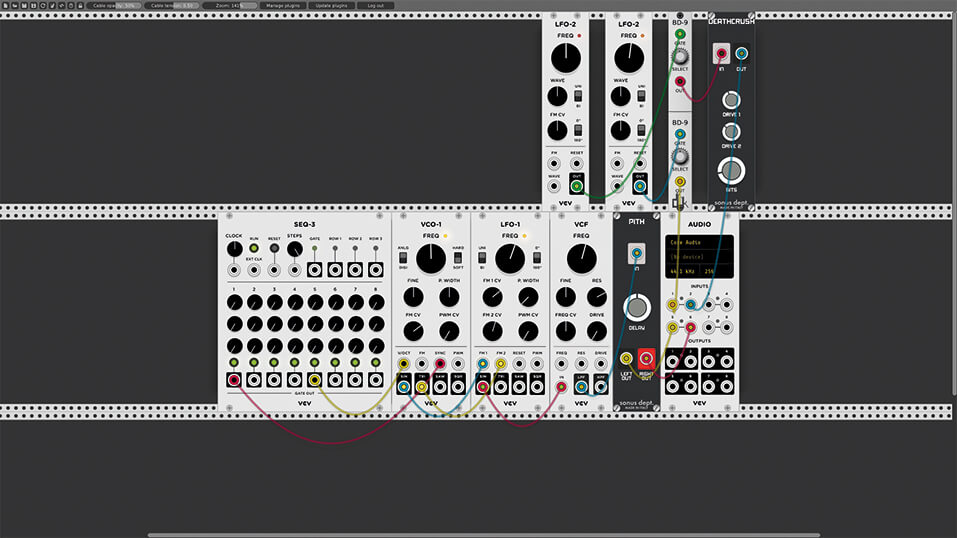 3. If in doubt, download the current Ableton Live demo and install it on a second computer, or if you like modular synths, try the free VCV Rack modular synth system, there’s a Link module available for that. 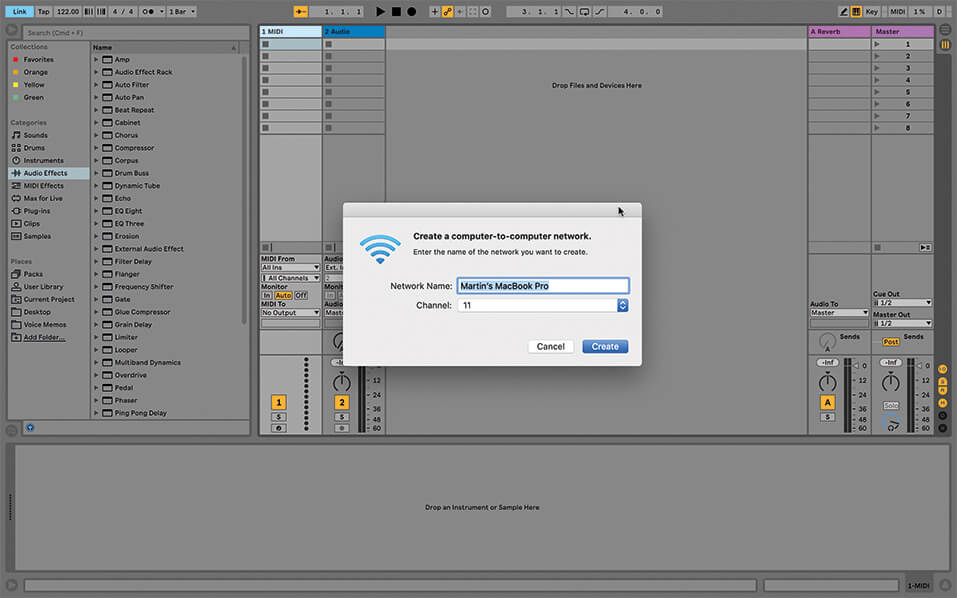 4. First thing to do is join a WiFi network – all the devices need to be on the same one! If a network isn’t available, or you encounter router/security issues, create a computer-to-computer (ad hoc) network, and join everything to that one. 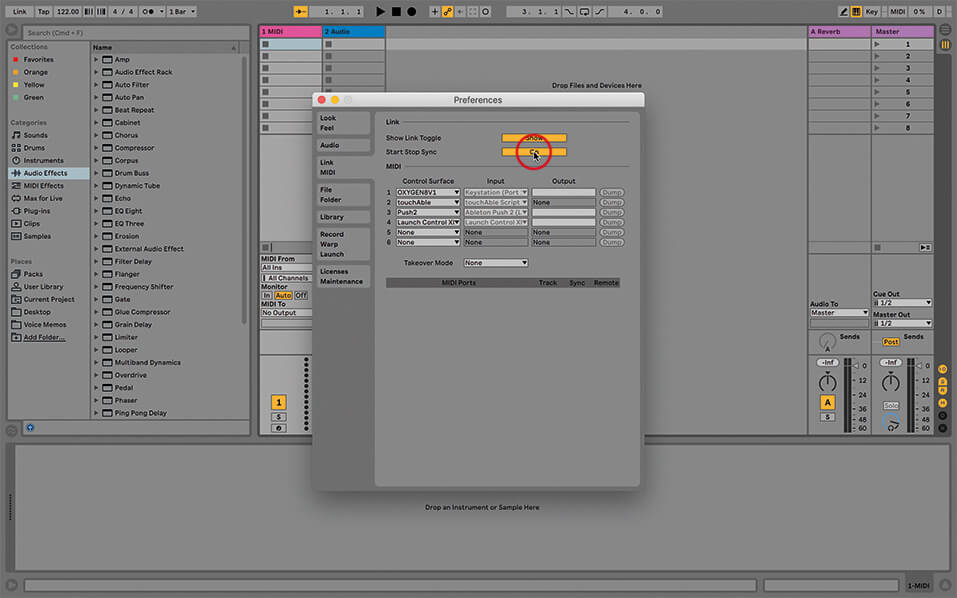 5. Launch Live (from 9.6 onwards) and open Preferences, and go to the Link MIDI tab. Turn on ‘Show Link Toggle’, and you’ll probably want ‘Start Stop Sync’ on as well. Close Preferences and you’ll see the Link box at top left of the screen. 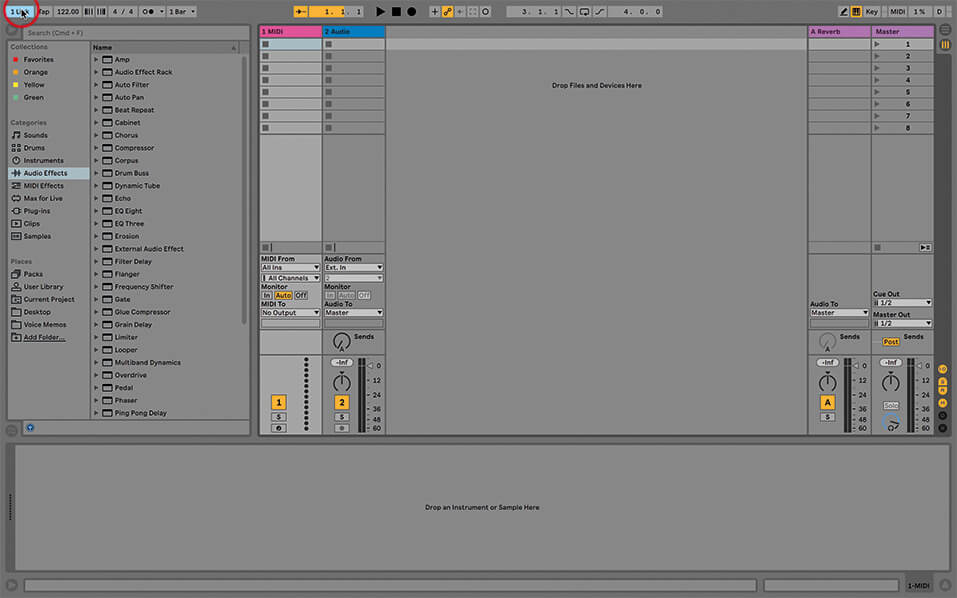 6. Click on the Link box to join the Link network. If any other computers or devices are already set up, a number will appear to indicate how people are on. There’ll also be an endlessly scrolling left/right indicator to show the current tempo. 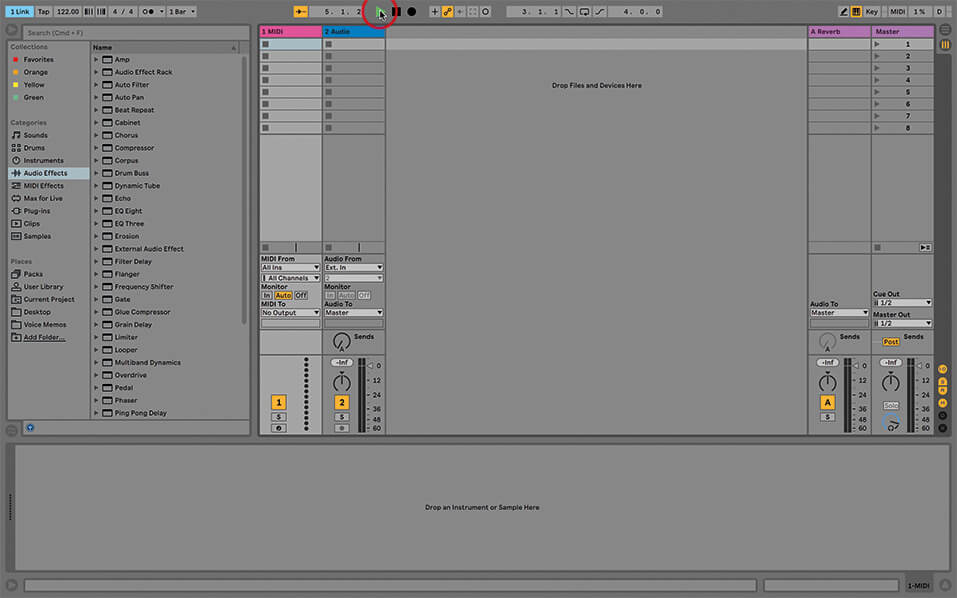 7. If you’re joining an existing jam, your tempo will change automatically, so don’t be surprised by that. What happens next depends on whether you enabled ‘Start Stop Sync’. If you did, Live will start/stop whenever anybody on the jam starts or stops their transport. 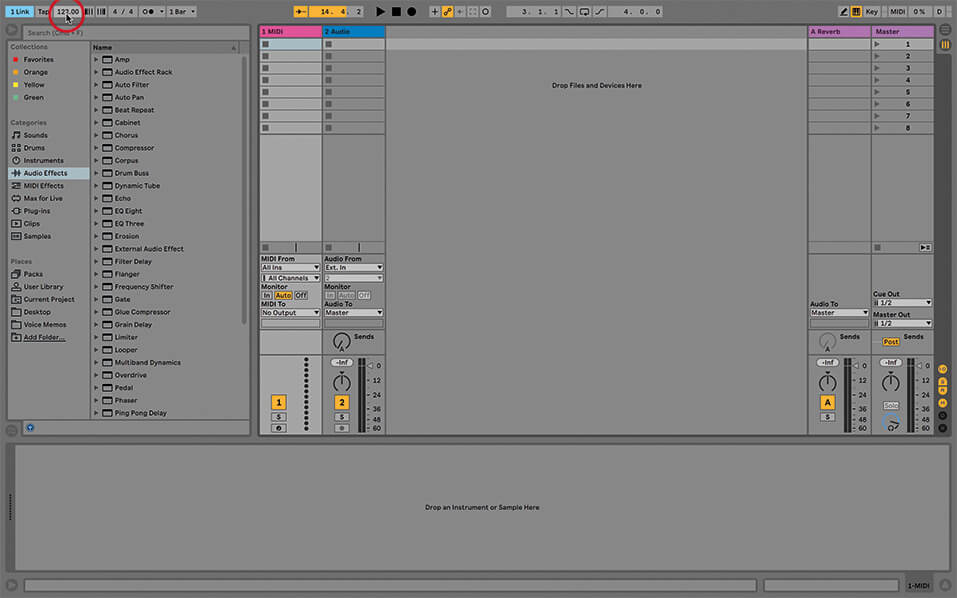 8. If you didn’t choose Start Stop Sync, then Live’s transport remains under your control; you can start or stop whenever you like. All that’s different is that your tempo will be affected by the other participants. In a Link jam, anybody can control the tempo.

9. Setup is similar for any other software on your computer, or another computer, or iOS. If we use Korg Gadget on iOS as an example, Link options are located inside the Settings section, with the little gear wheel; you’ll still see that rolling sync display. 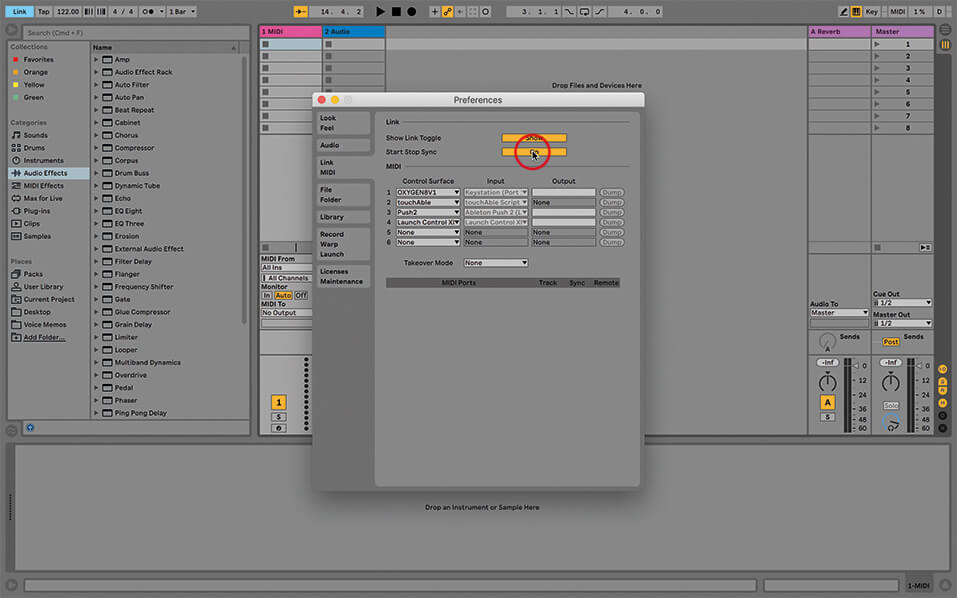 10. Link’s Start Stop Sync is available for other apps, but it hasn’t been added to many yet, so in other situations, Link just represents a clock – a time-stream that you can jump into and out of at any time. With Link, nobody’s in charge. 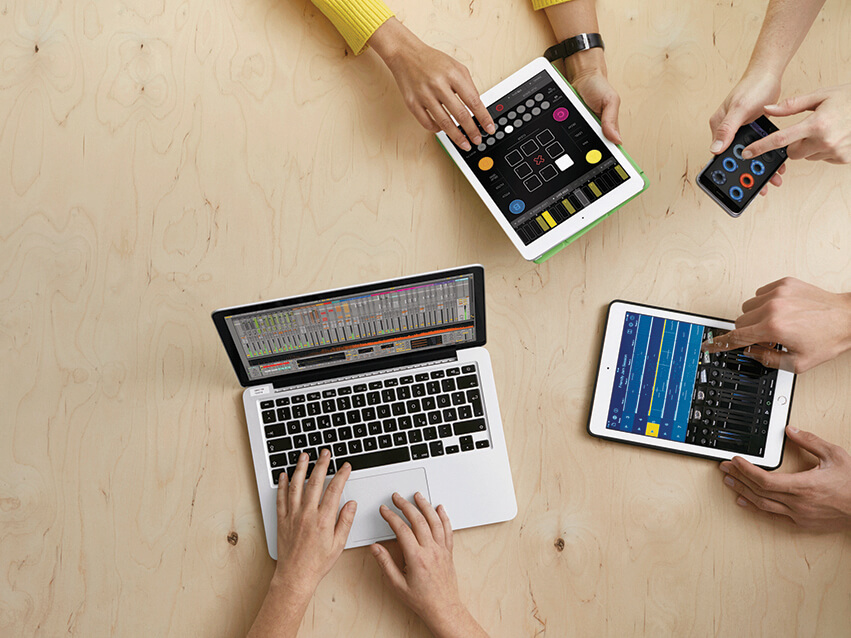 11. At this point, you’ve got everything you need for an informal jam. If you’re in a quiet enough space, you can simply plonk your devices onto a table, and start playing, using the various onboard speakers to make a racket. It can be really spontaneous. 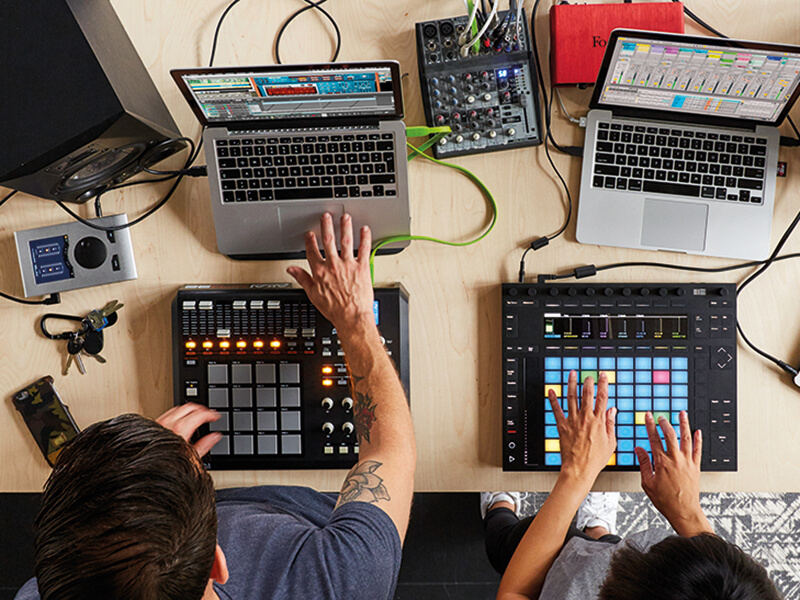 12. If you need to be better heard, or to get a better recording of your jam, you’ll need a mixer, cables, and a couple of speakers. Bluetooth audio exists, but there’s really no audio equivalent of Link. 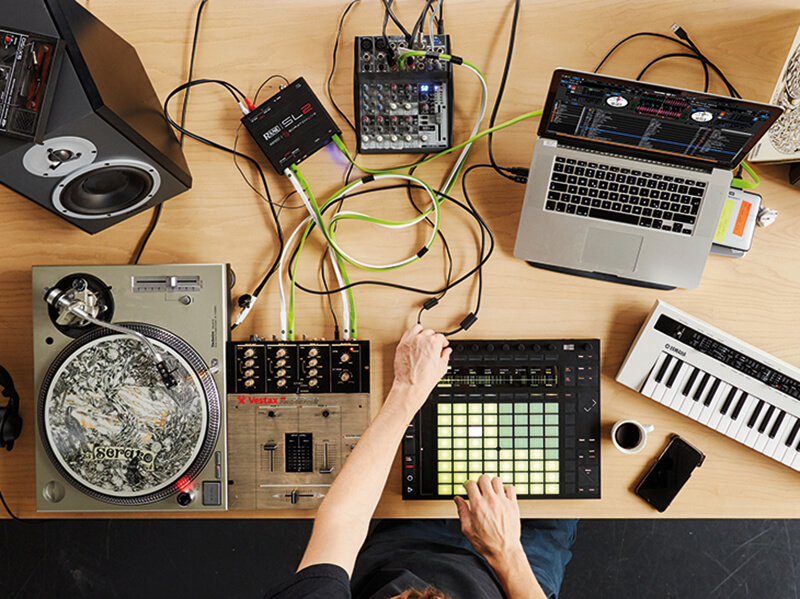 13. So far, we’re good for linking computers, phones, and tablets, across different platforms and operating systems. But suppose we want to use Link in a larger setup, that includes hardware drum machines or sequencers? Here’s a rig I put together earlier… 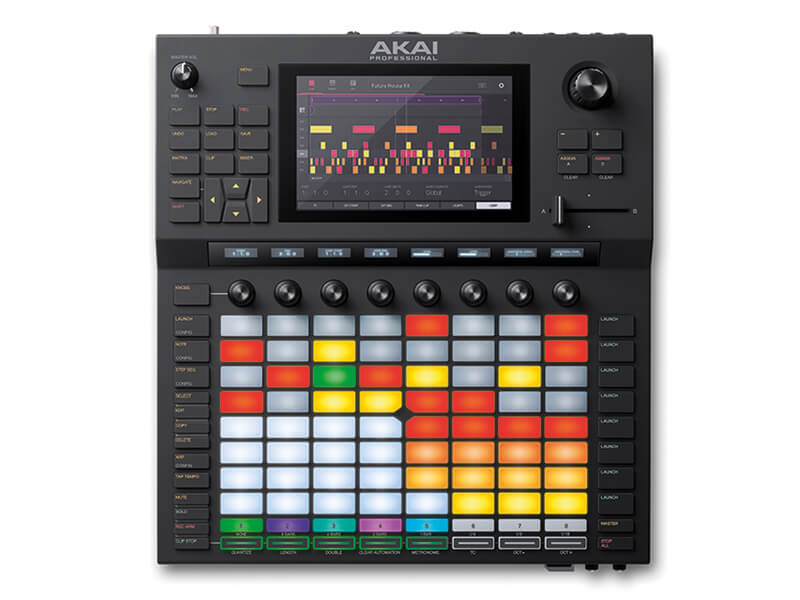 14. You probably have your own version of this, but this’ll give you an idea of how to go about it. Setup Live 10 with Link as described above, including the ‘Start Stop Sync’ option. Connect a sequencer like Akai Force to the same WiFi network and enable Link. 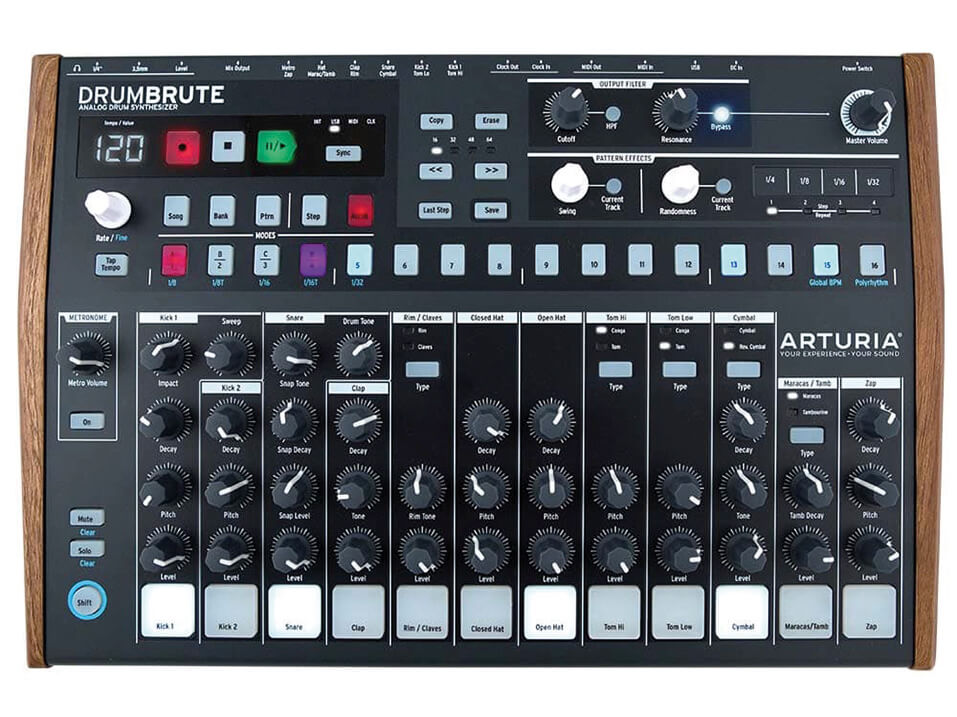 15. Connect a MIDI cable to Force’s MIDI output (MIDI-3.5mm adaptor), then open Force’s Preferences and configure it to send MIDI clock via that output. Connect the other end of the cable to MIDI in on the Arturia DrumBrute and set that to MIDI sync. 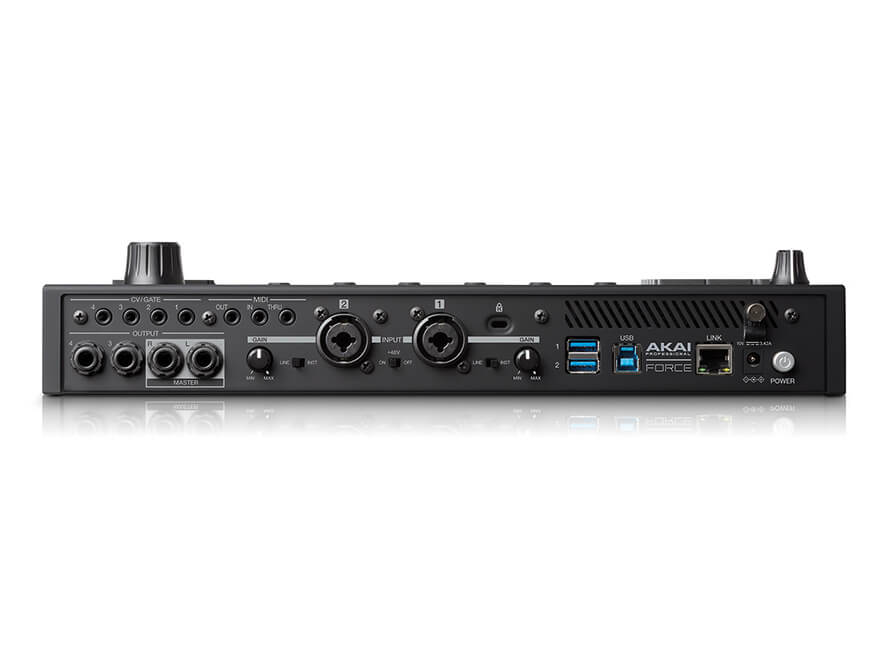 16. When you start Live, sync goes to the Force, and when you start Force, DrumBrute will start playing too – all three in sync, even with tempo changes. Further points if you use CV/Gate out from Force to sync the DrumBrute instead of MIDI! 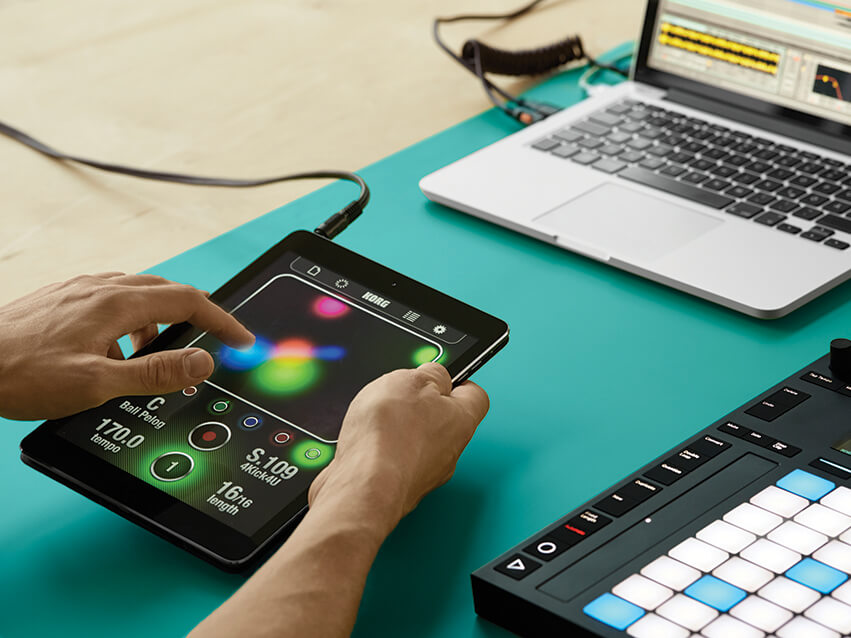 17. Once you get that kind of rig in your mind, that Link can be part of a chain of sync’d software and machines, it really expands your sense of what’s possible, and how much easier it is to do these days, thanks to Link. 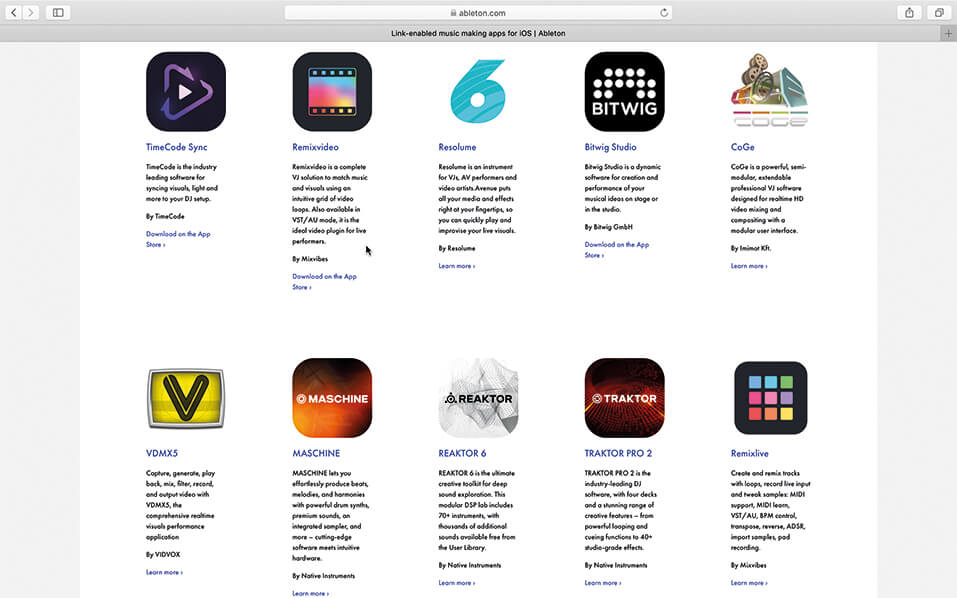 18. You don’t even have to have Live present to run a Link jam, and if needed, you can even Link different apps on the same computer or mobile device, with more apps supporting it all the time. This makes sync-life so much easier.