How to commit to an arrangement in Ableton Live

One-shots, loops, audio effects – your elements are all in place. Now it’s time to commit everything to a finished arrangement. Fear not. Ableton Live makes this process intuitive and fun. 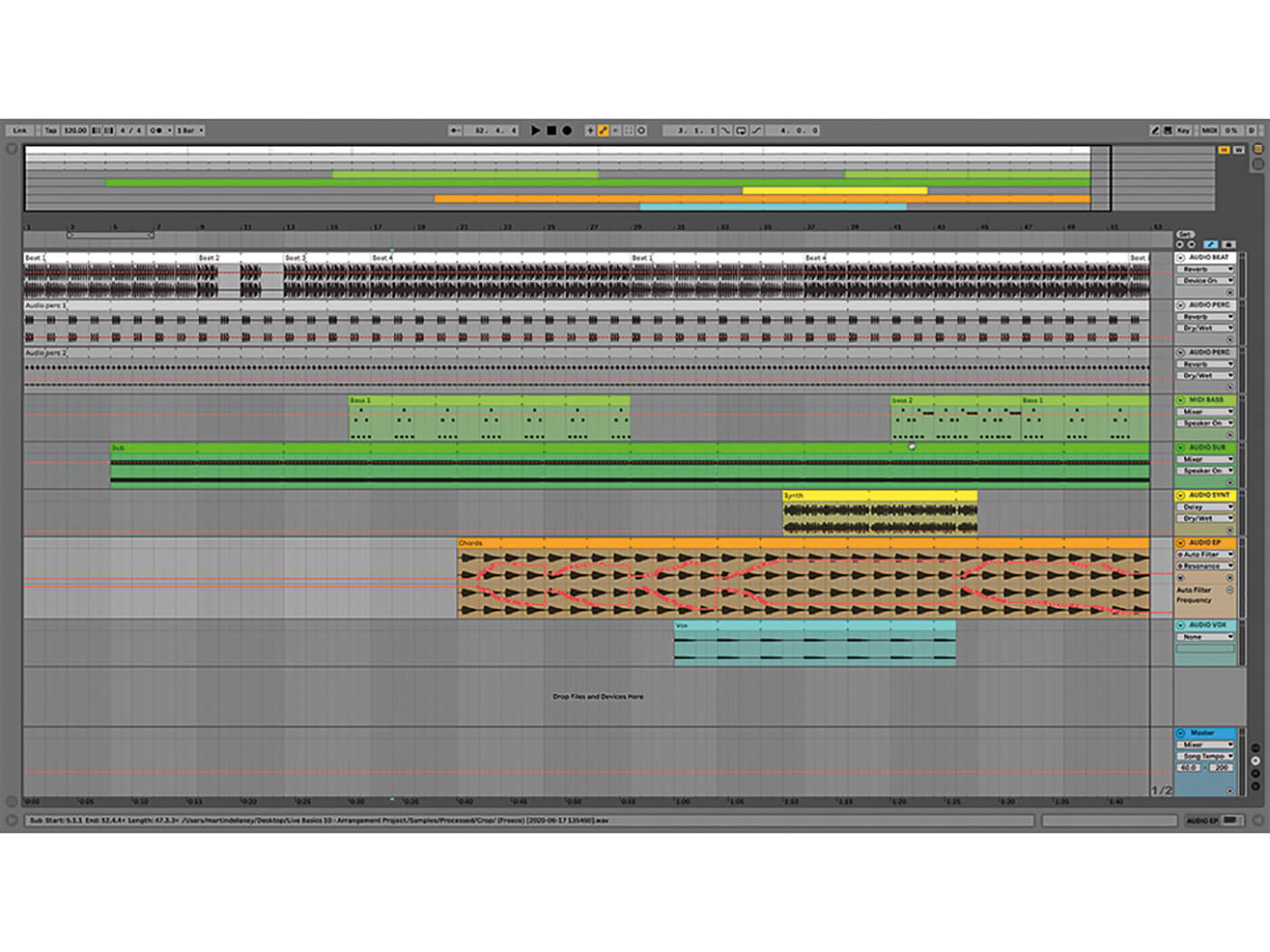 There’s a strange effect that falls over many producers when they come close to finishing a track. With all their parts in place, MIDI and audio tracks and effects all set seemingly in stone, and the end in tantalisingly in sight, they choke. For many creatives, clapping eyes on the proverbial light at the end of the tunnel actually causes them to regress back into the darkness of the process, the fear of the finish line too much to bear.

It’s the same for us too. Finishing a track by committing to an arrangement and a mix can be daunting. The joy of creation can dissipate quickly in lieu of what can seem like tortuous decisions. The good news for Ableton users is that there’s no need to feel so constricted. With Live, even building arrangements and song structures can be done with the same freewheeling jam-oriented attitude as playing a live set.

In this tutorial, our aim is to achieve a finished song structure that we’re happy with without compromising on our track’s fluid and spontaneous characteristics. If you want to export your music and share it with an audience, sooner or later you’ll need to create a stereo mix that’s structured, organised and repeatable.

After you hit record, everything you do in Live is captured. It’ll be exported to disk as an AIF, WAV, MP3 or another stereo audio format, so you can upload it, add it to a movie or create a CD (remember those?). Once you do share it, it’ll be out there forever. There’s no taking it back. It’s important that the publishing experience is something you look forward to and enjoy. Don’t let the notion of committing to an arrangement and sharing it with the world stymie your creativity and or push you into an endless cycle of tweaking, umming and ahing.

We’ve provided an Ableton Live set for you to work with. If you don’t have Live 10, you can download the demo and run it safely alongside your current version.

If your track features a lot of improvisation and feel-based performance, using a hardware controller will be essential for capturing your Live arrangement. Recording an arrangement is kind of a performance itself, so we suggest using a controller for this too. For the sheer depth of their control, Ableton’s own Push, and the TouchAble Pro app are two of the finest controllers for this DAW.

Push is more roomy and tactile, and easier to set up. TouchAble Pro is more compact and has a customisable layout. If you’ve got the desk space and the money, the two can work brilliantly together. As we all know though, there are many controllers that’ll integrate with Live in different ways, from the Novation Launchpad, which covers basic Clip and Scene launching, to the Akai APC40, which is more tailored towards live performance DJ-based tasks, to keyboards such as Novation’s new Launchkey MK3 (flip to page 092 for our review), a stellar example of the well-established keyboard-plus-controller concept.

Some controllers have Transport controls, which let you start and stop recording without having to reach for the mouse. Everything you do is recorded, creating either new clips in the Arrangement View or adding new automation lanes as you move mixer controls or device parameters. (Though we recommend not getting too fiddly with the mixer while recording, and dealing with that afterwards.)

The amazing thing about jamming out arrangements is how easily you can lose track of time. It’s easy to overshoot, sometimes by four or more times your target length. We recommend that you set an alarm on your phone or keep track via a simple in-view clock. It’s always better to go over your target length than under though; there’s nothing worse than music that feels like it’s been padded out.

Looking at a long timeline of captured material can take longer to deal with but it’s relatively easy to pick out the best bits and dump the rest, including any dead time at the beginning where you forgot to reset the counter before recording. We suggest that you make a safety copy of your original take before editing, just in case you accidentally ditch something before later realising its worth.

Keep it loose (if you want)

Depending on the music you make, you might not necessarily need a totally loose structure. There can be good reasons to rein things in a bit. The most important thing to takeaway from this tutorial is the idea that you can improvise without fear of getting things wrong or making mistakes. Just go for it.

You can always fix, amend or append things afterwards, and you might spontaneously come up with sounds or combinations that you never would have considered were you carefully mapping everything out. Master these commitments, and tune in next time, when we’ll look at how to edit and polish our recordings.

Committing to an Arrangement in Ableton Live 10: step-by-step 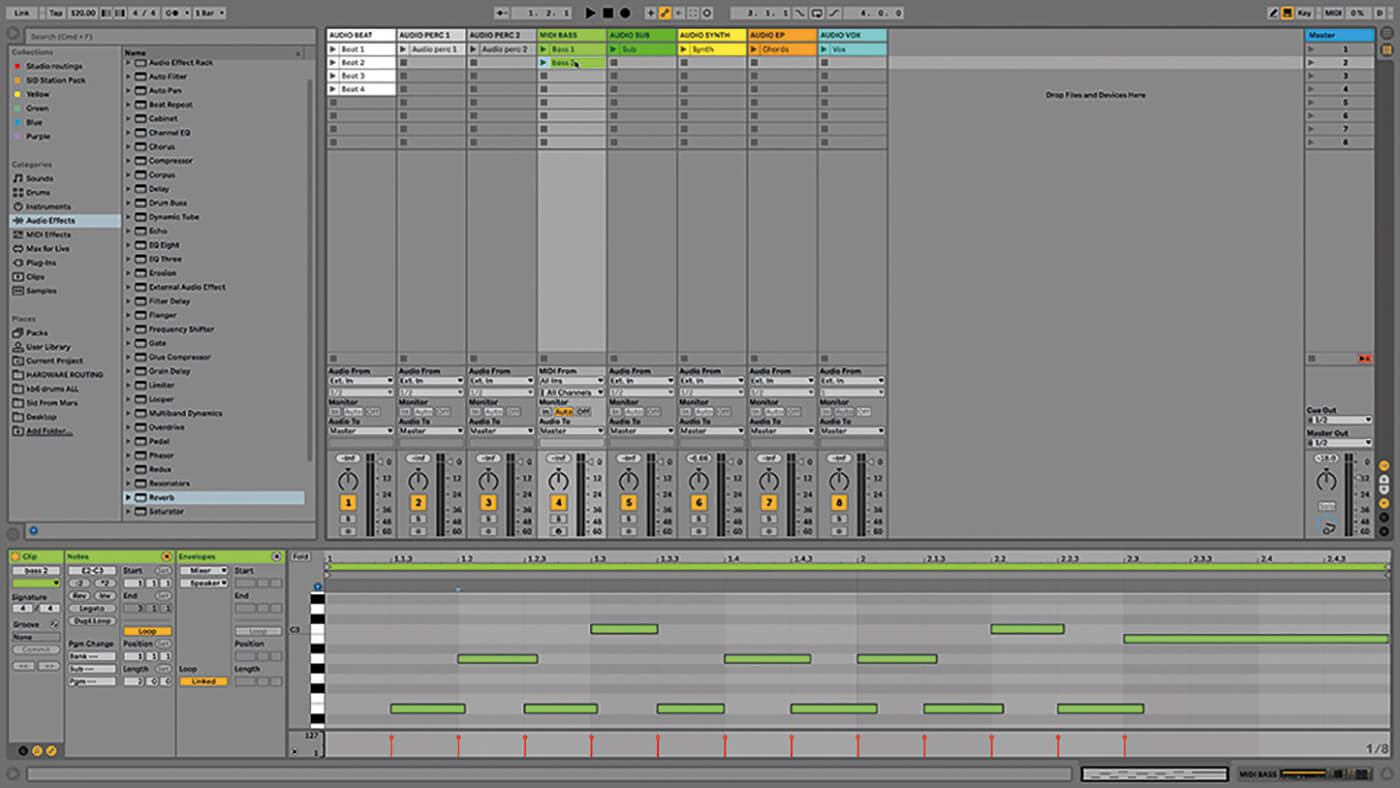 1. We’ve provided an Ableton Live set for this walkthrough, containing clips, scenes and audio effects. You’ll need Ableton Live 10. Download the demo if you don’t have it. If you have an earlier version, you could use your own material instead. 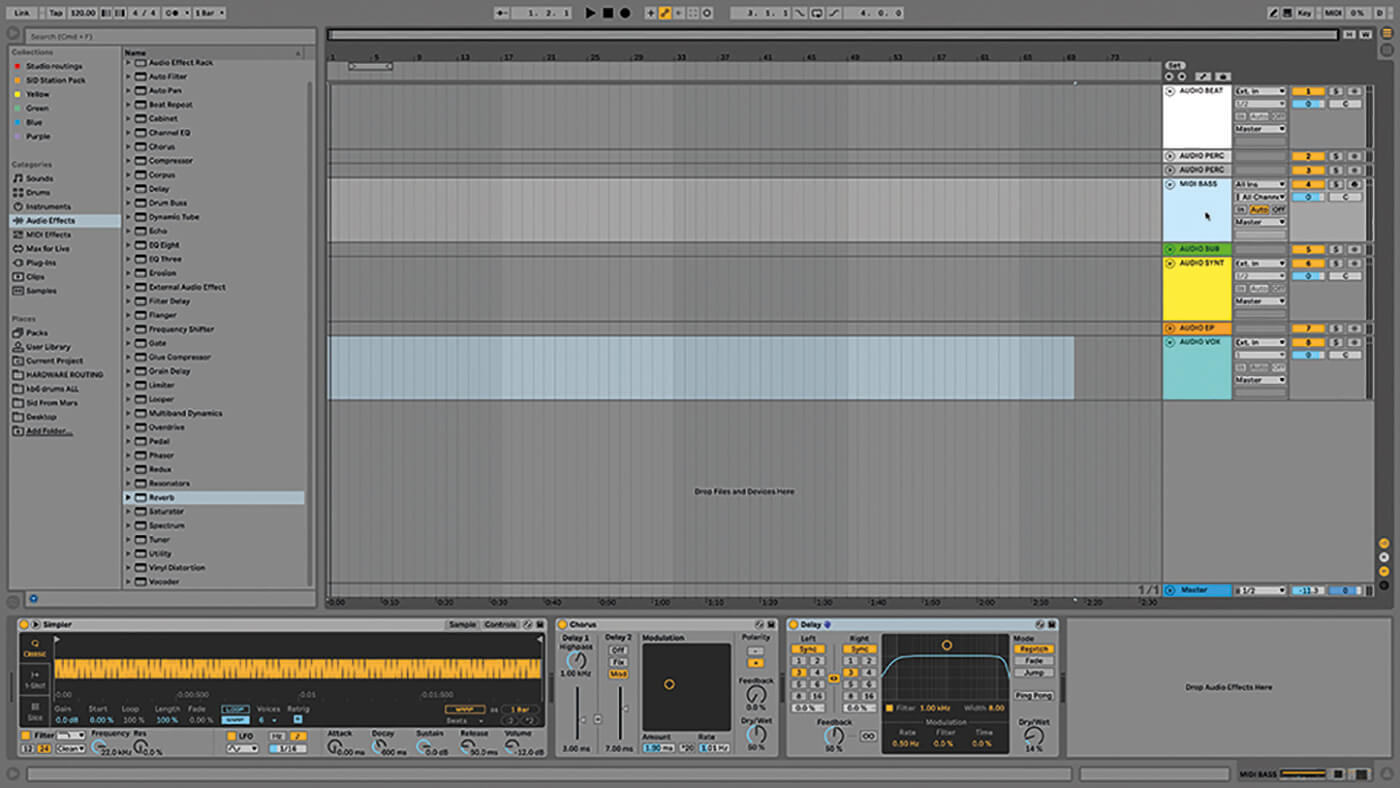 2. We’re going to record a jam in Live’s Session View and use that as the basis for an arrangement we’ll work with in the Arrangement View, the timeline-based workspace akin to those in DAWs such as Logic and Cubase. 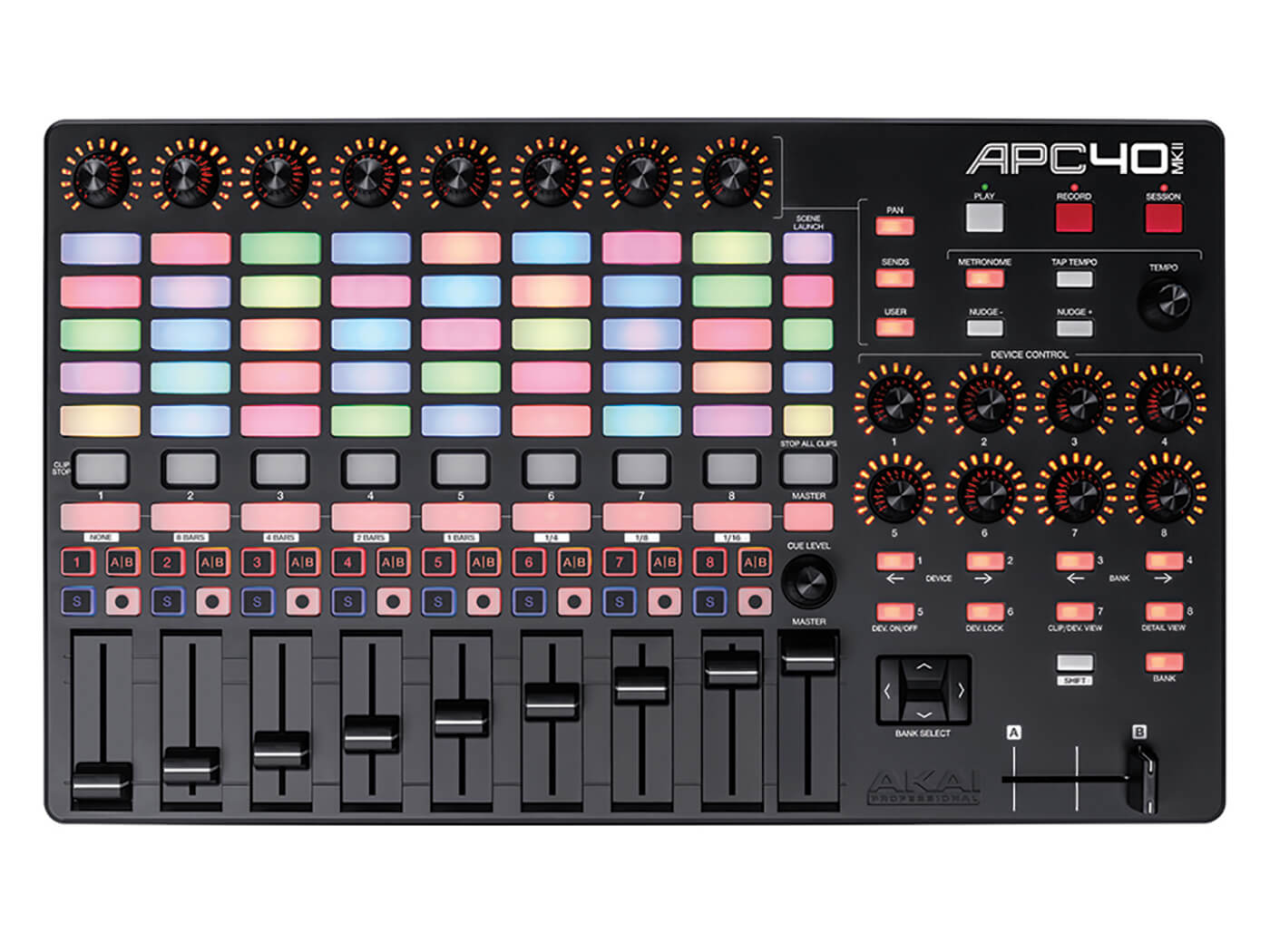 3. Ableton Push is the perfect fit for this type of activity but controllers such as Akai’s Force and APC 40, Novation’s Launchpad and Launchkey, and the TouchAble Pro app for iOS and Android devices are also great options. 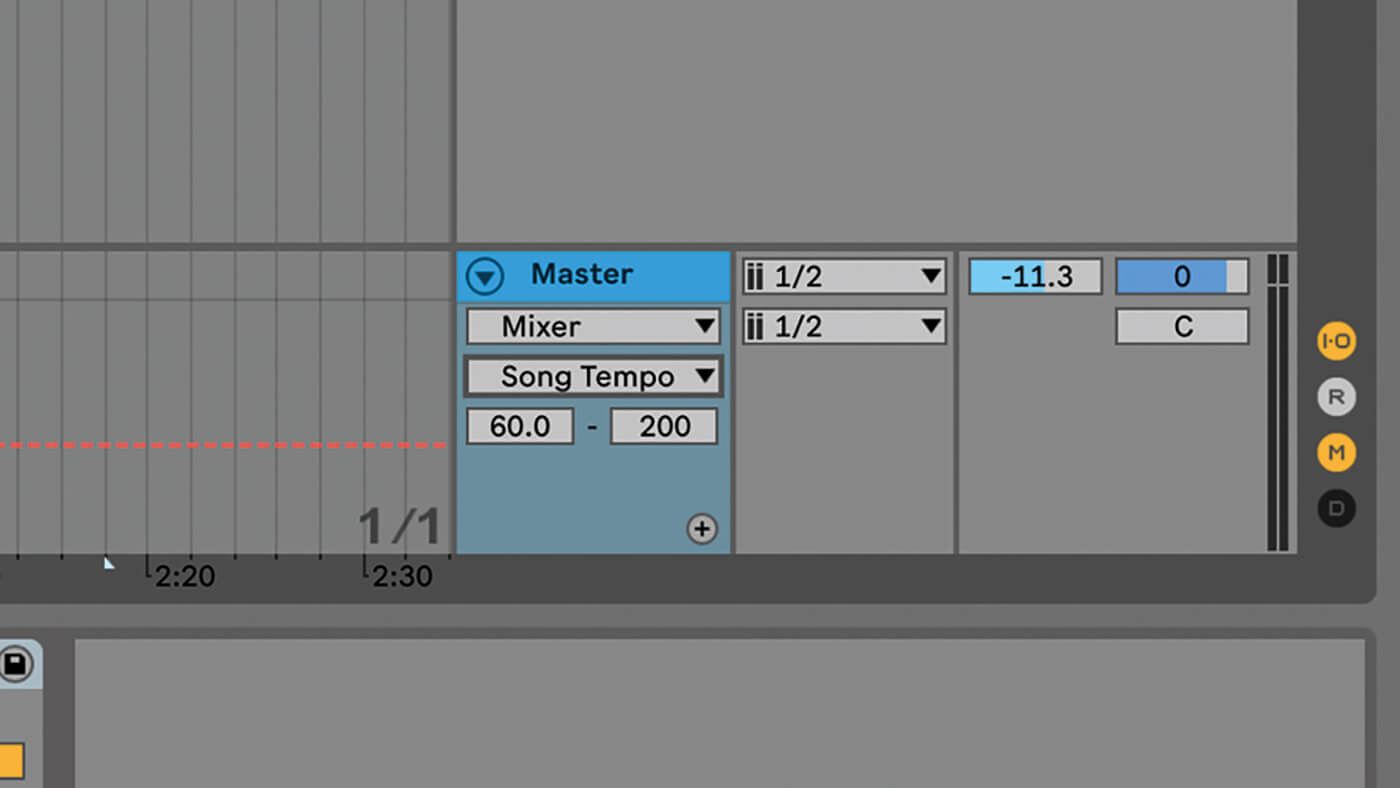 4. Everything you do in Live will be recorded. That includes clip and scene launching, audio recording, MIDI note input, tempo changes, and any other control moves or parameter changes you make. Even if you drop in new material during recording, it’ll be included. 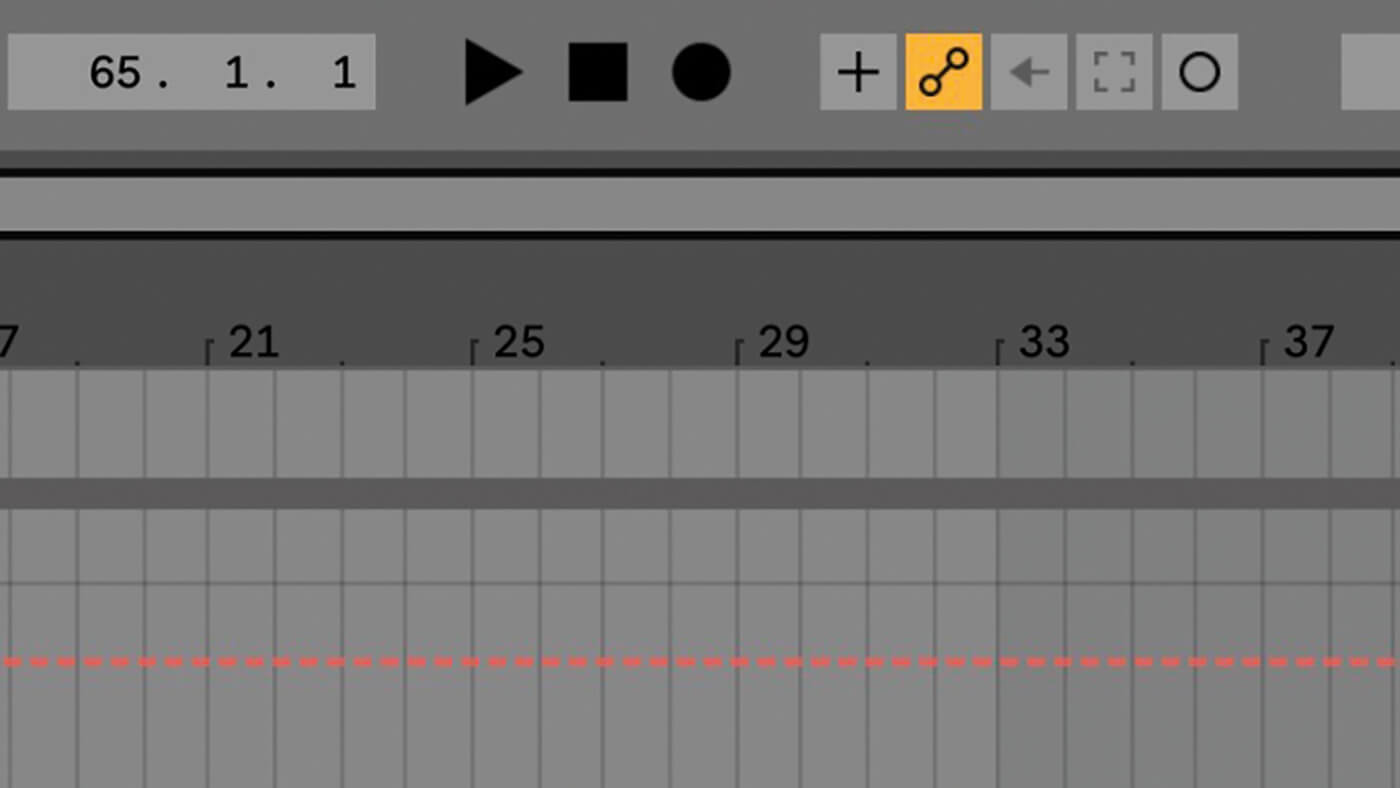 5. Check the buttons at the top of your Session View. Make sure the Automation Arm button is on, which ensures that automation is captured during recording, including movement, effects and mixer parameters. 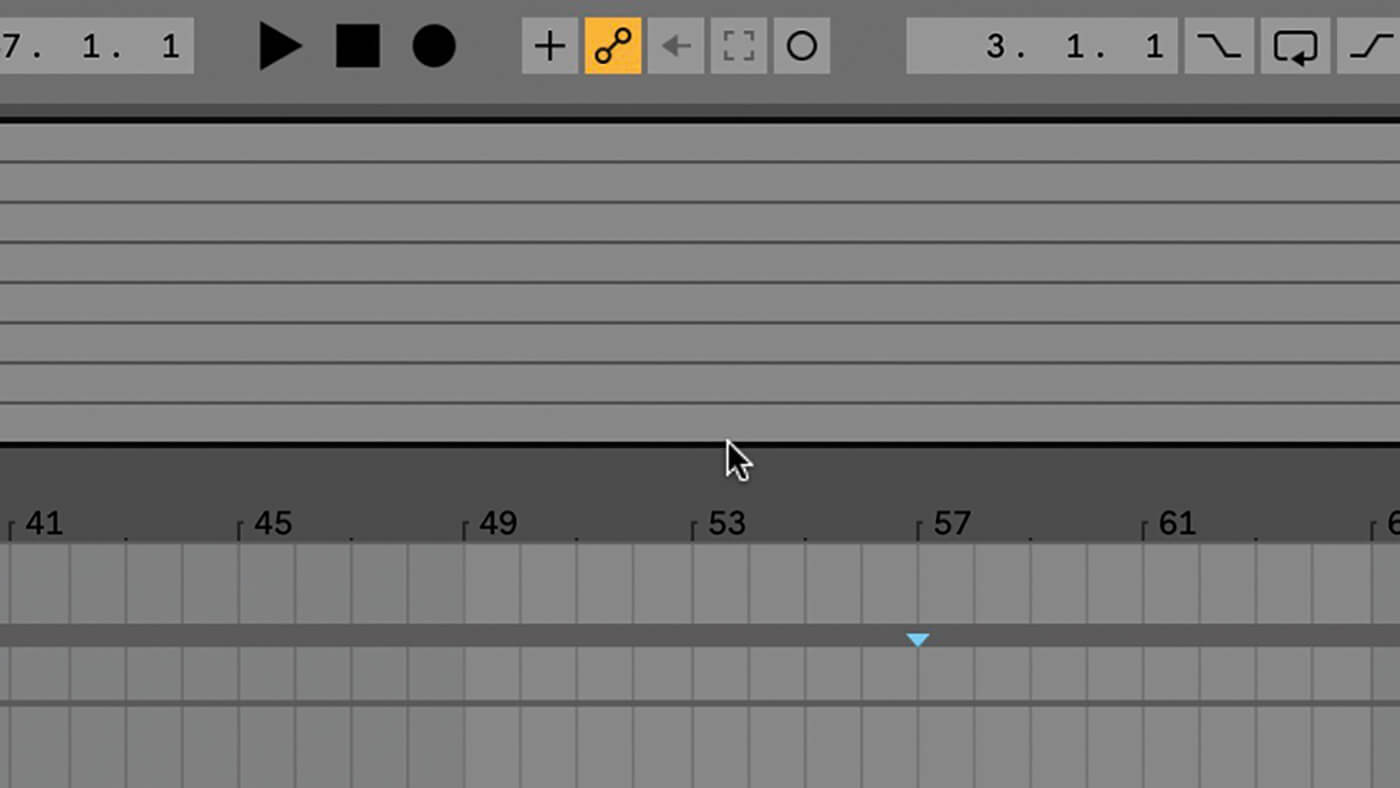 6. If you can’t see it, turn on the Overview by pressing Alt+Cmd+O. This shows you an overview of what’s being laid down in the Arrangement View as you play. Drag downwards to expand the overview.

PUSH OVER Ableton Push shines at this part of the process. If you want to create your Live arrangements in a spontaneous and intuitive way instead of laboriously mapping everything out, there’s little doubt that Push is the best tool around, brilliant for controlling clip and scene launching, live instruments, effects and automation. For Live users, creating an arrangement can feel like you’re doing a live performance instead of your maths homework. Play now, tidy later. 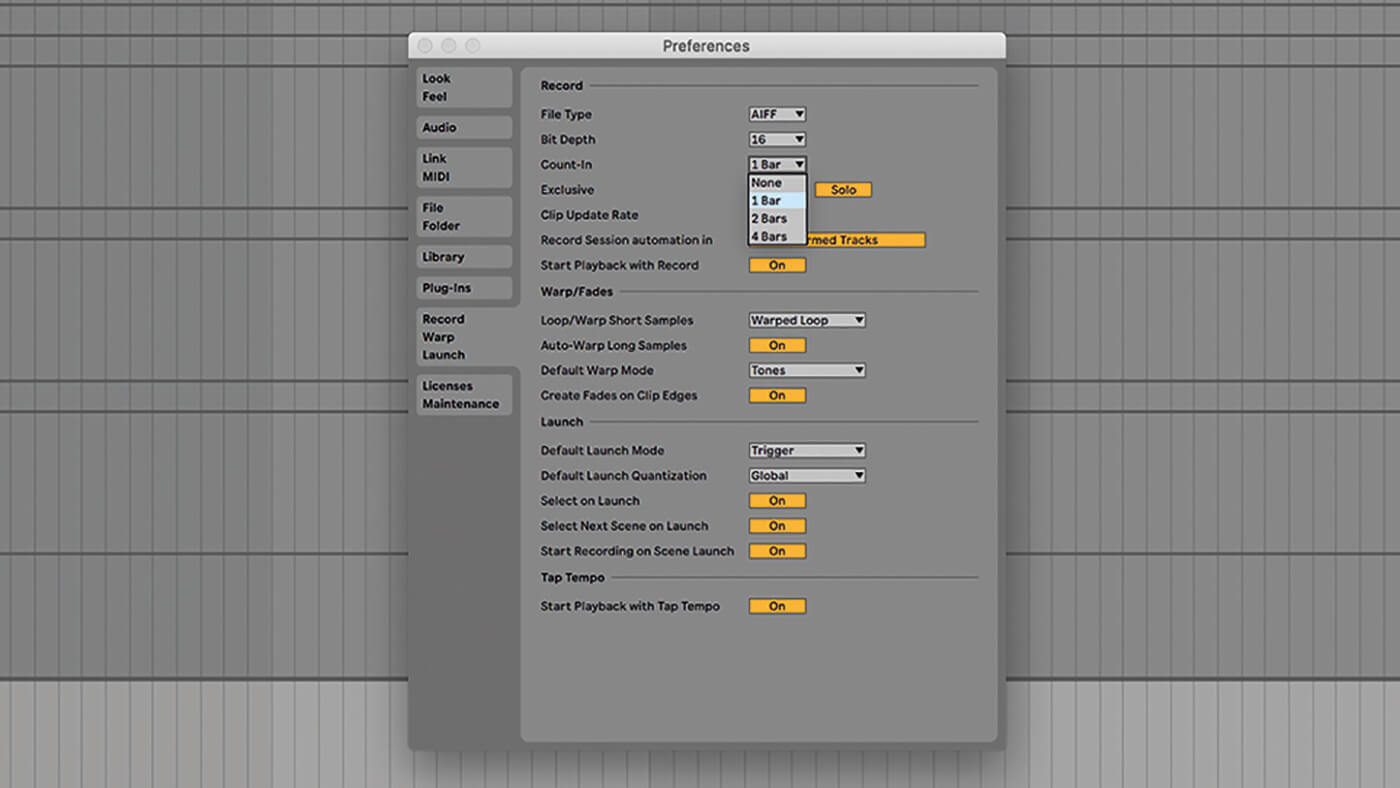 7. If you want a count-in, turn it on via the preferences panel. You’ll hear four clicks after you hit record. You can also shift-click the circular record button, which will turn red and see Live wait for a clip or scene to be launched before commencing recording. 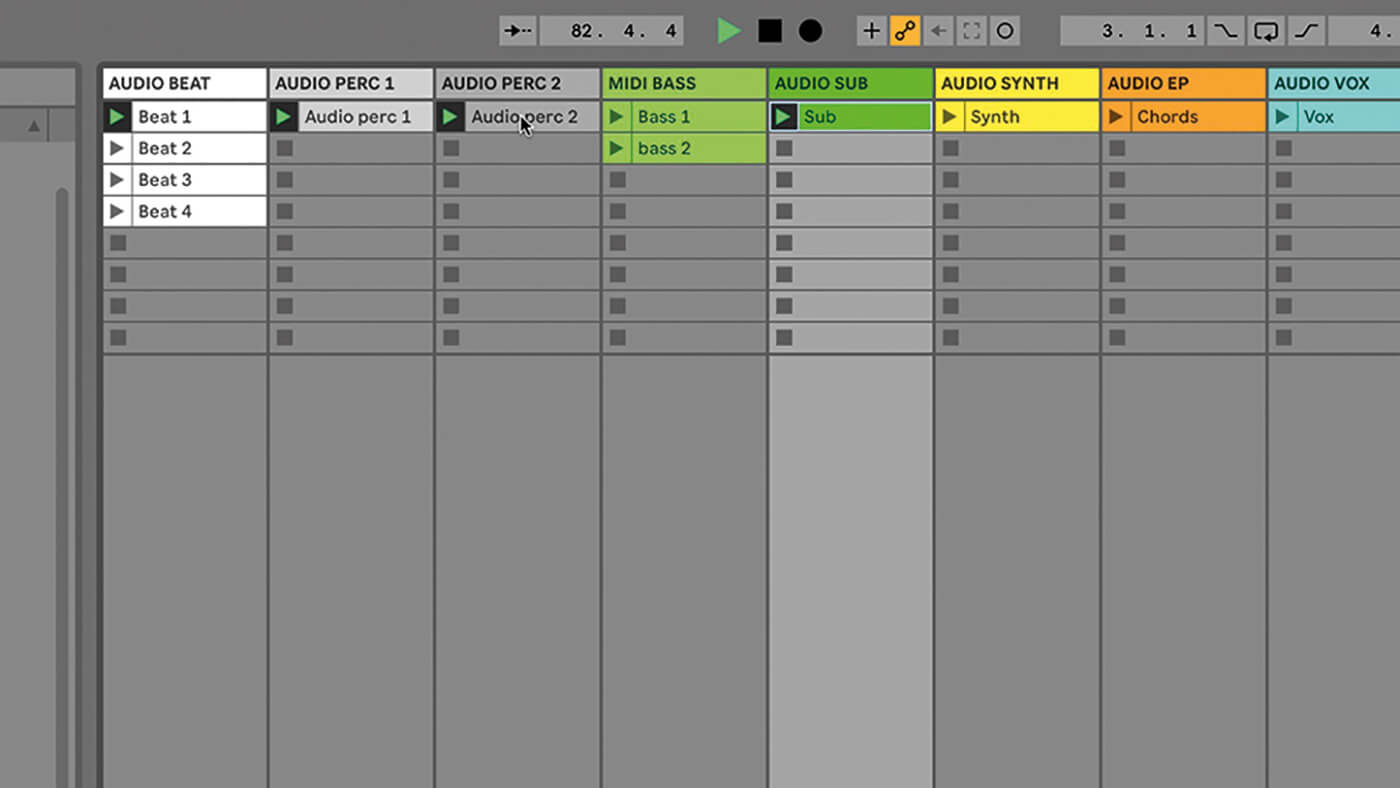 8. Play fearlessly. After all, you’re not recording to tape. Everything you do can be undone later. Play for as long as you like and enjoy the experience. 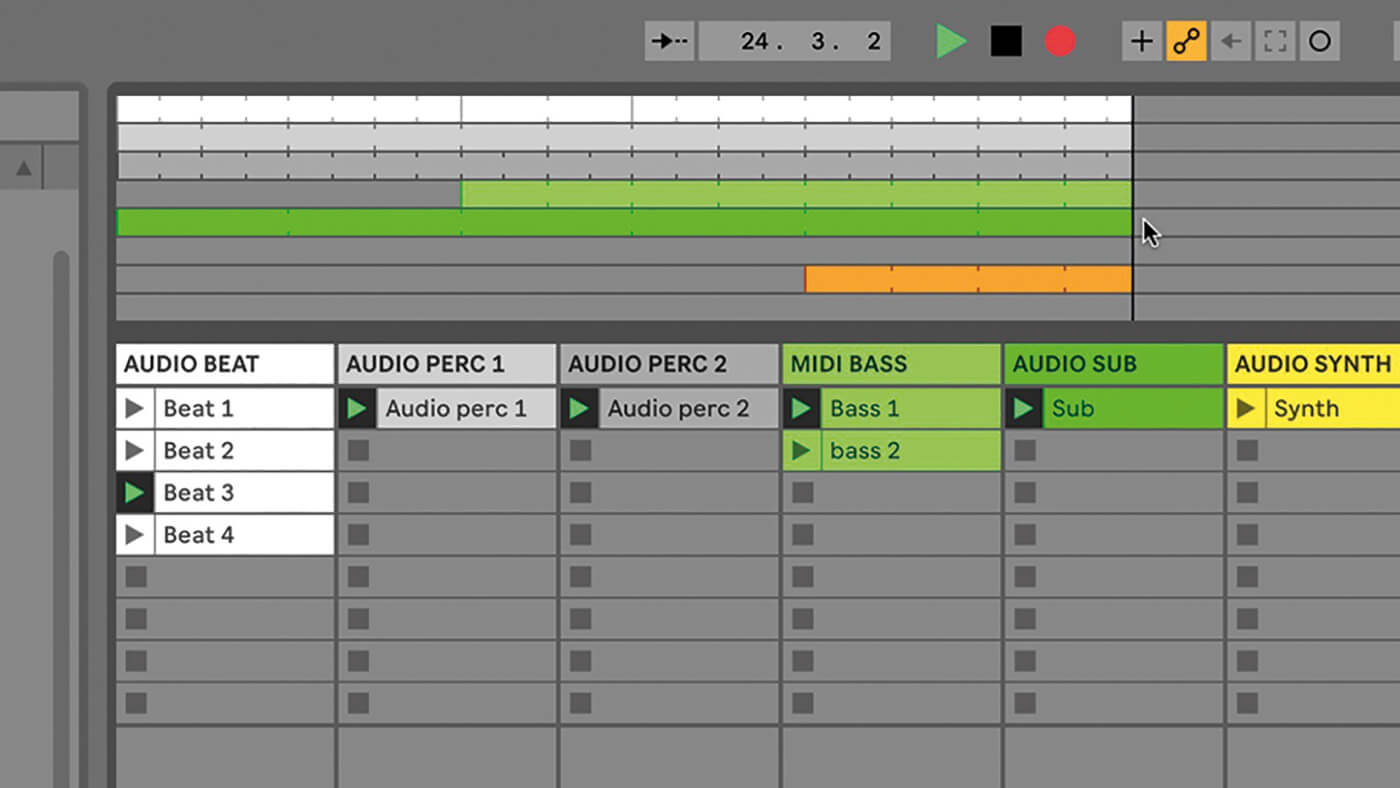 9. Keep an eye on the Overview and the bar, beats, sixteenths display above it to get a general picture of where you are. It’s easy to lose track of time when you’re jamming. Keep some form of clock handy. 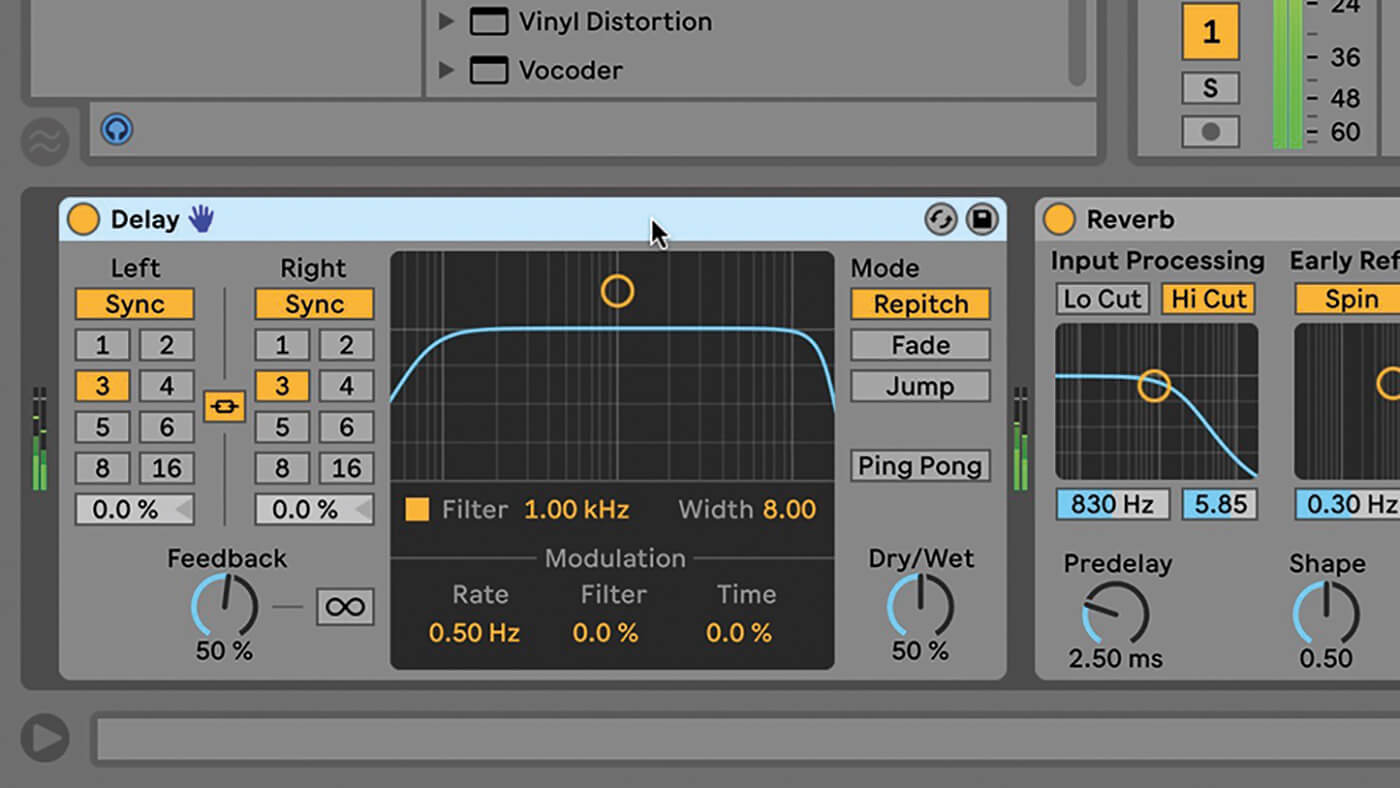 10. Forgot to load that delay effect before you hit record? No problem. Open the browser and drop it onto the relevant track during recording. Live is very forgiving when it comes to working with native devices but third-party plug-ins might not be so friendly. 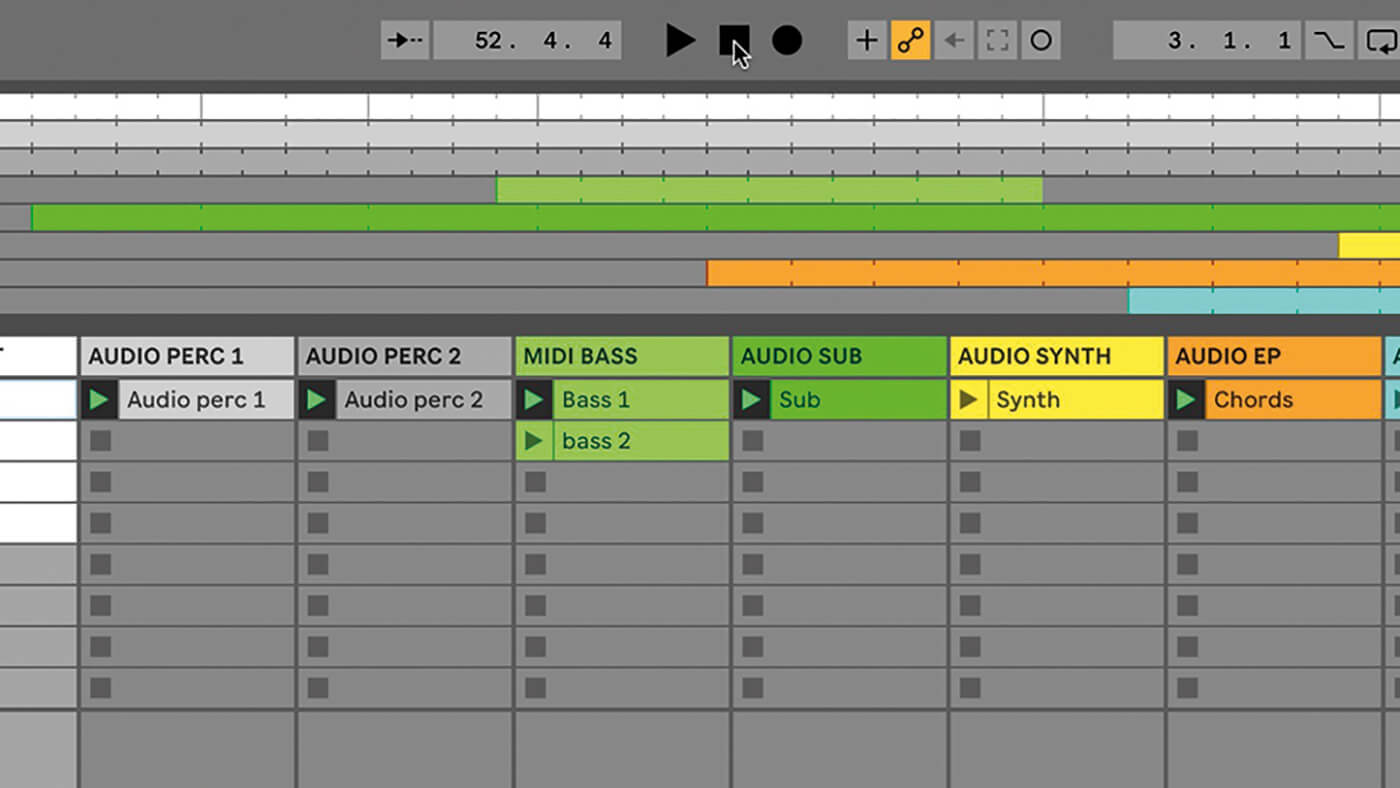 11. When you’re done, stop recording by clicking the stop button at the top of the screen, tapping stop on your hardware controller or hitting the spacebar on your computer keyboard. Save the project. 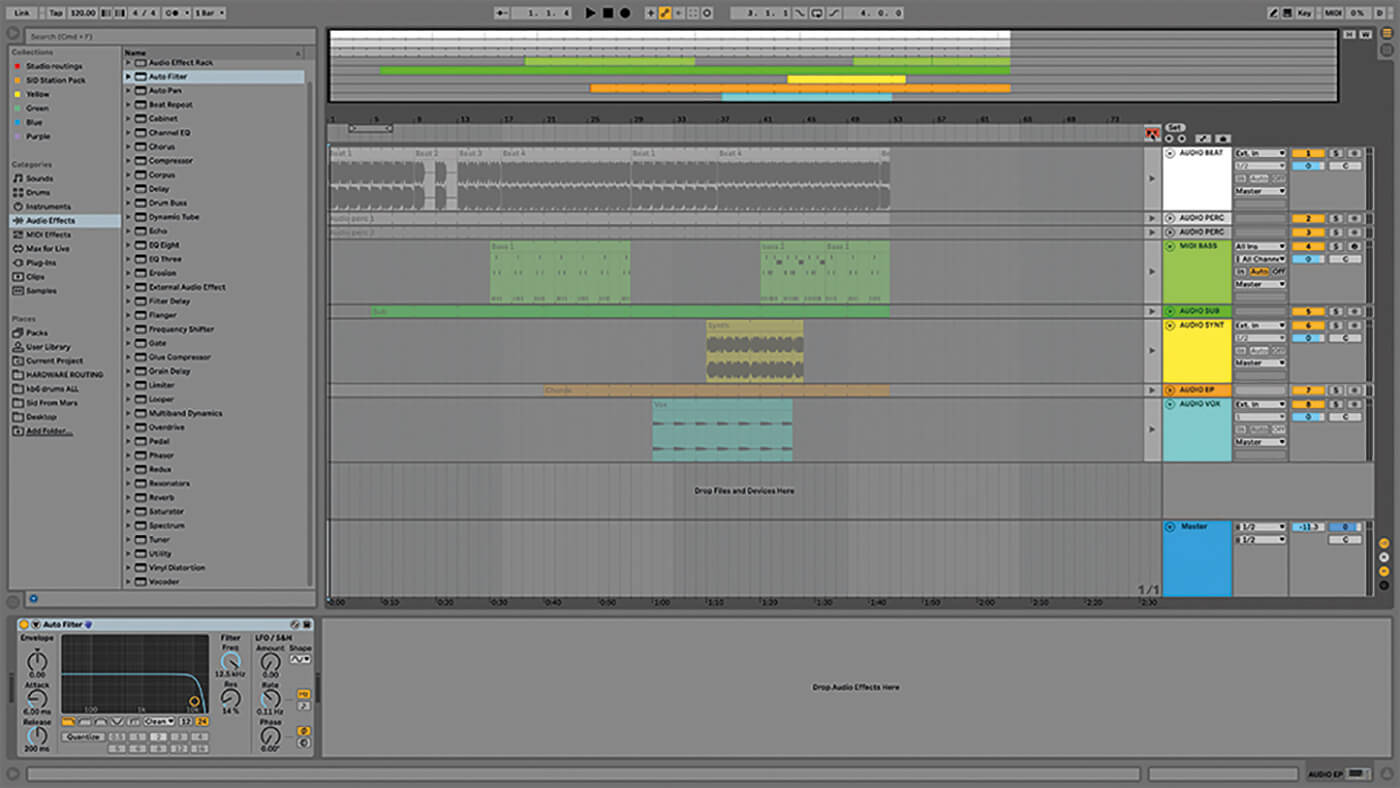 12. Tap the tab key to switch to the Arrangement View, where you’ll see your performance laid out from left to right. If the tracks are greyed out, click the orange Back To Arrangement button and they should playback properly.

LIVE NATION Though music venues have been shuttered across the world, if you’re used to live performance and record in a fluid and improvisational fashion anyway, why not livestream your recording sessions? It can help you reap the thrill of performing to a live audience, and this kinetic excitement will translate to a better recording overall. 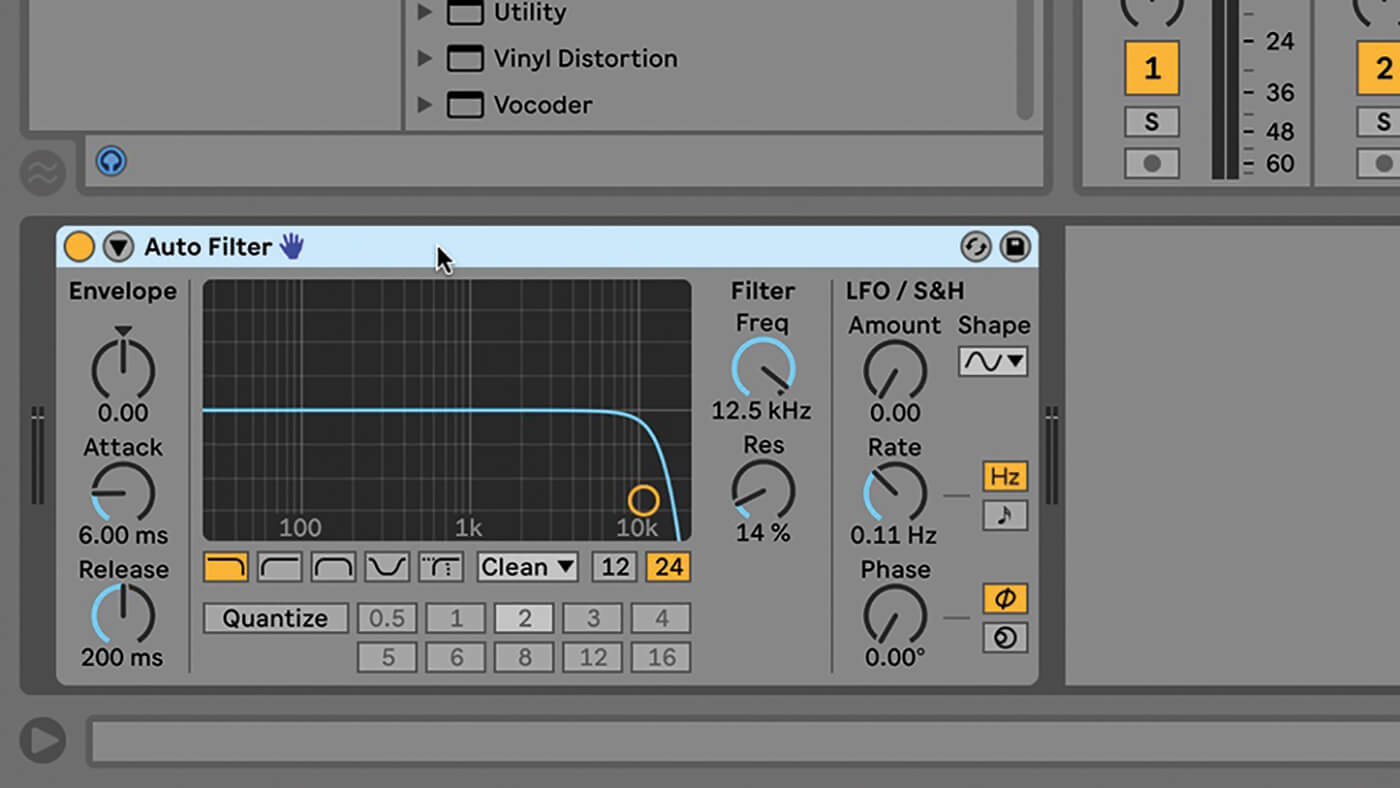 13. If there’s anything you forgot to do during your improvisation, you can edit it in or re-enter record and take another pass at it, adding extra clips or further layers of automation. You can be clinical, loose a combination of the two. 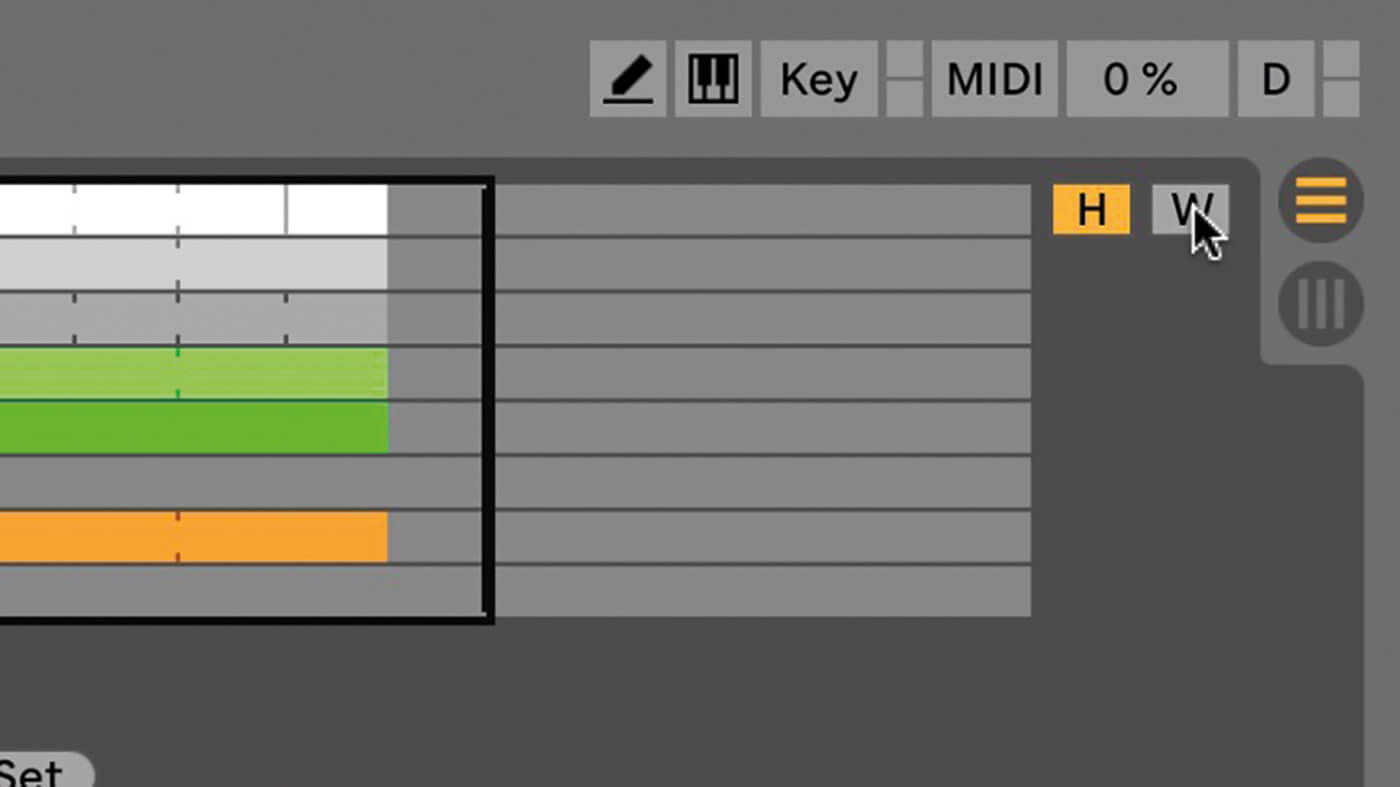 14. In Live 10, tap H to arrange your tracks vertically, and W to fit the Arrangement to the available width of your display. Watch out for conflicts if the virtual MIDI keyboard is on. 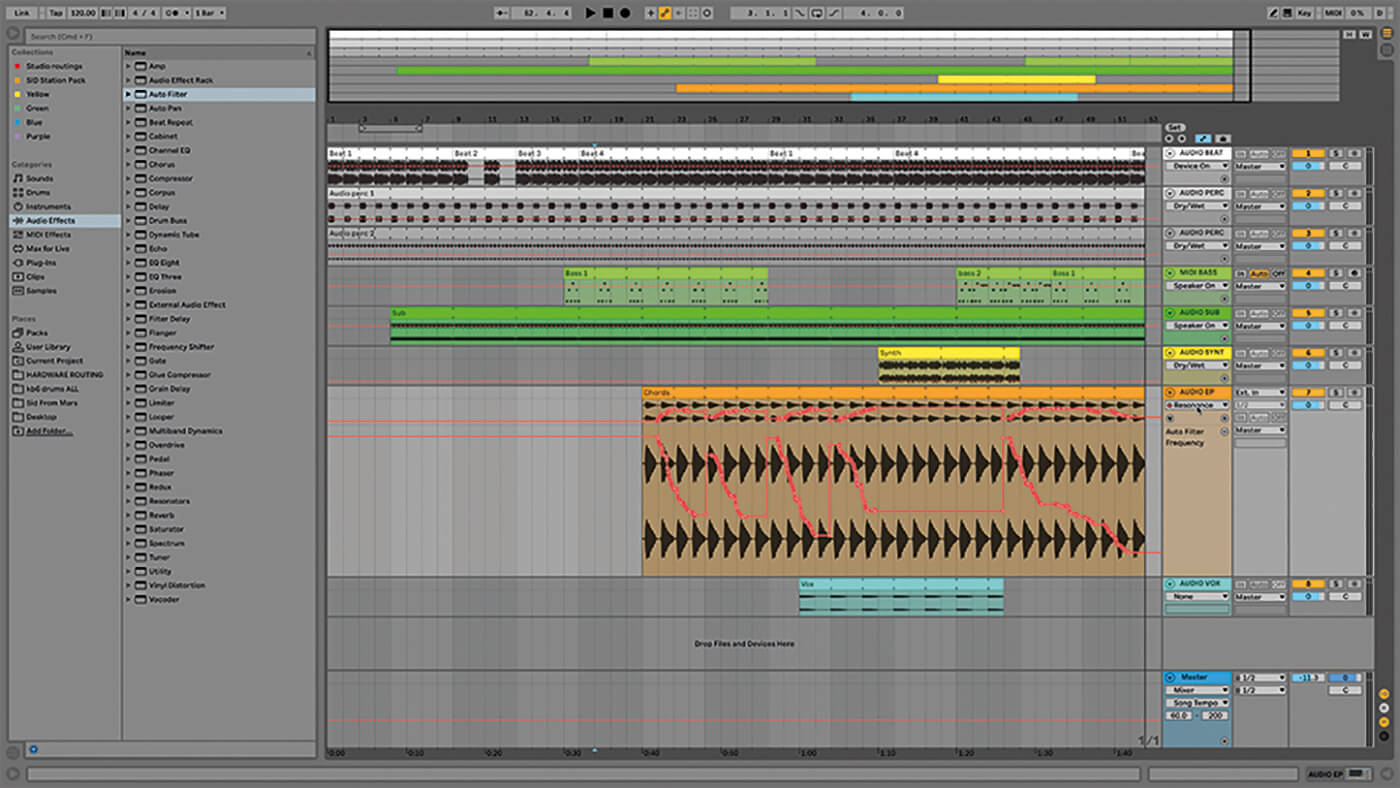 15. You might also want to tap A to unfold the automation lanes in your arrangement. It’ll only show one for each track by default, so you’ll still have to unfold the others manually. Look out for those telltale red dots. 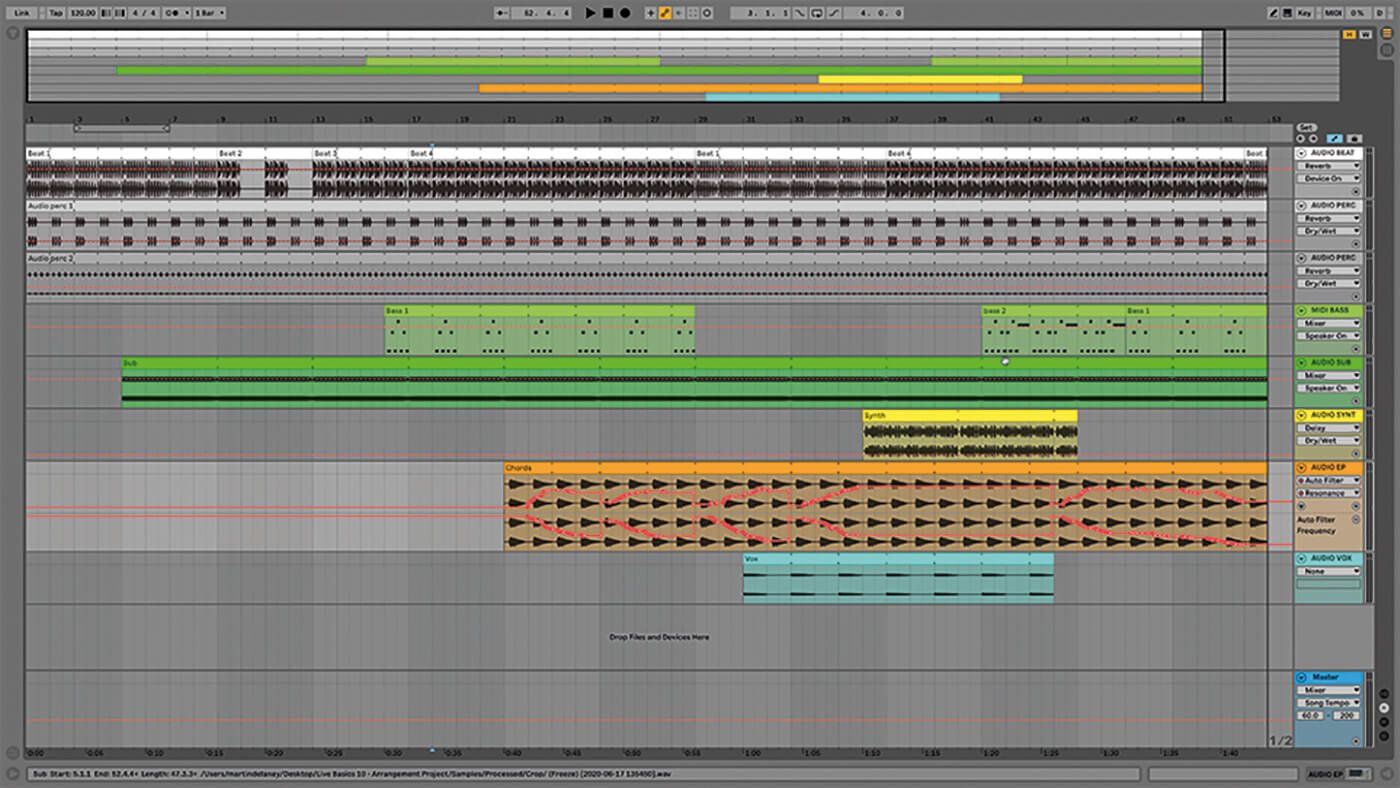 16. Use the + and – keyboard buttons to zoom in and out, and X to snap out to the full timeline after zooming in. Hide any elements you don’t need, such as the browser, detail view and in/out view, to free up display real estate. 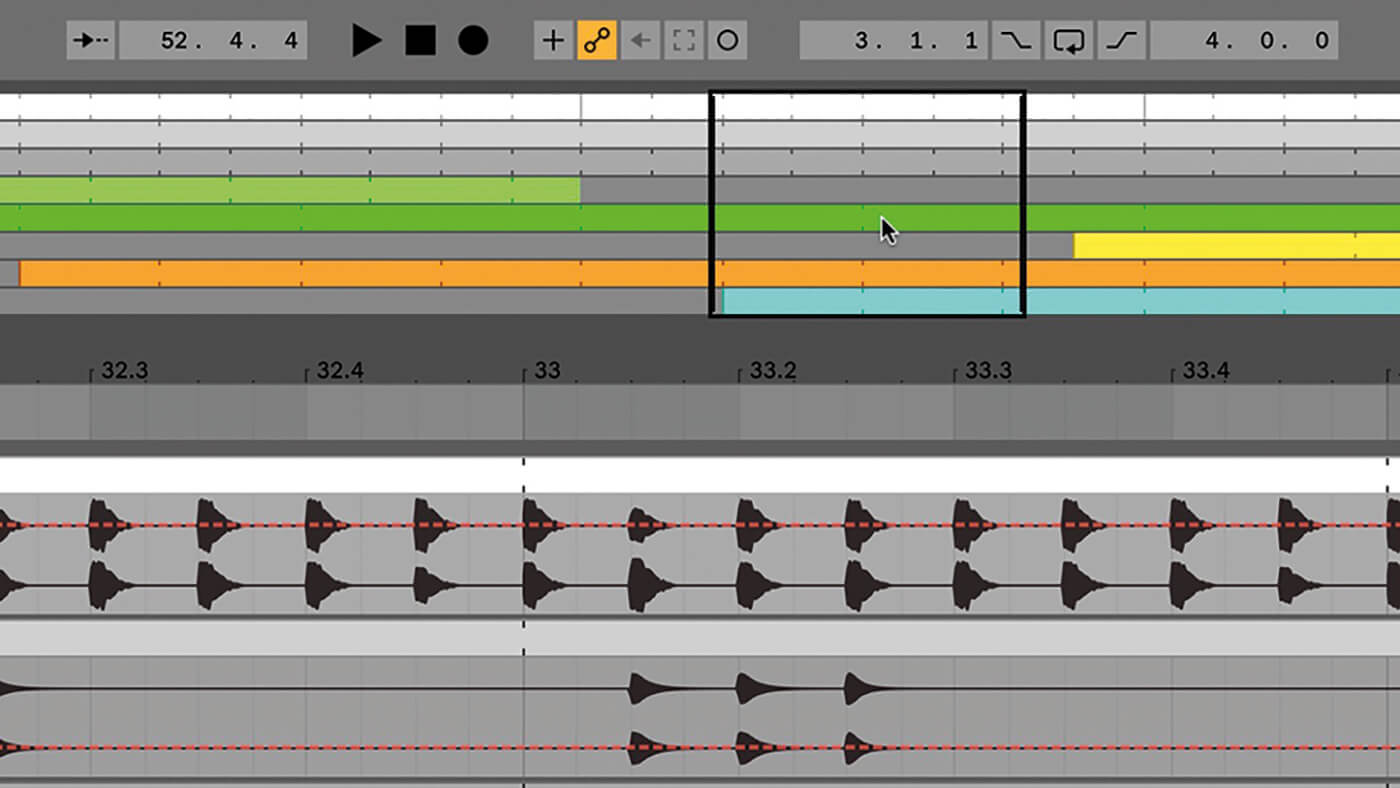 17. The Overview isn’t just there for visual reference. Click and drag left, right, up, down in the overview space to scoot around the Arrangement. If you’ve got any locators in the project, they’ll show up in the overview as well. 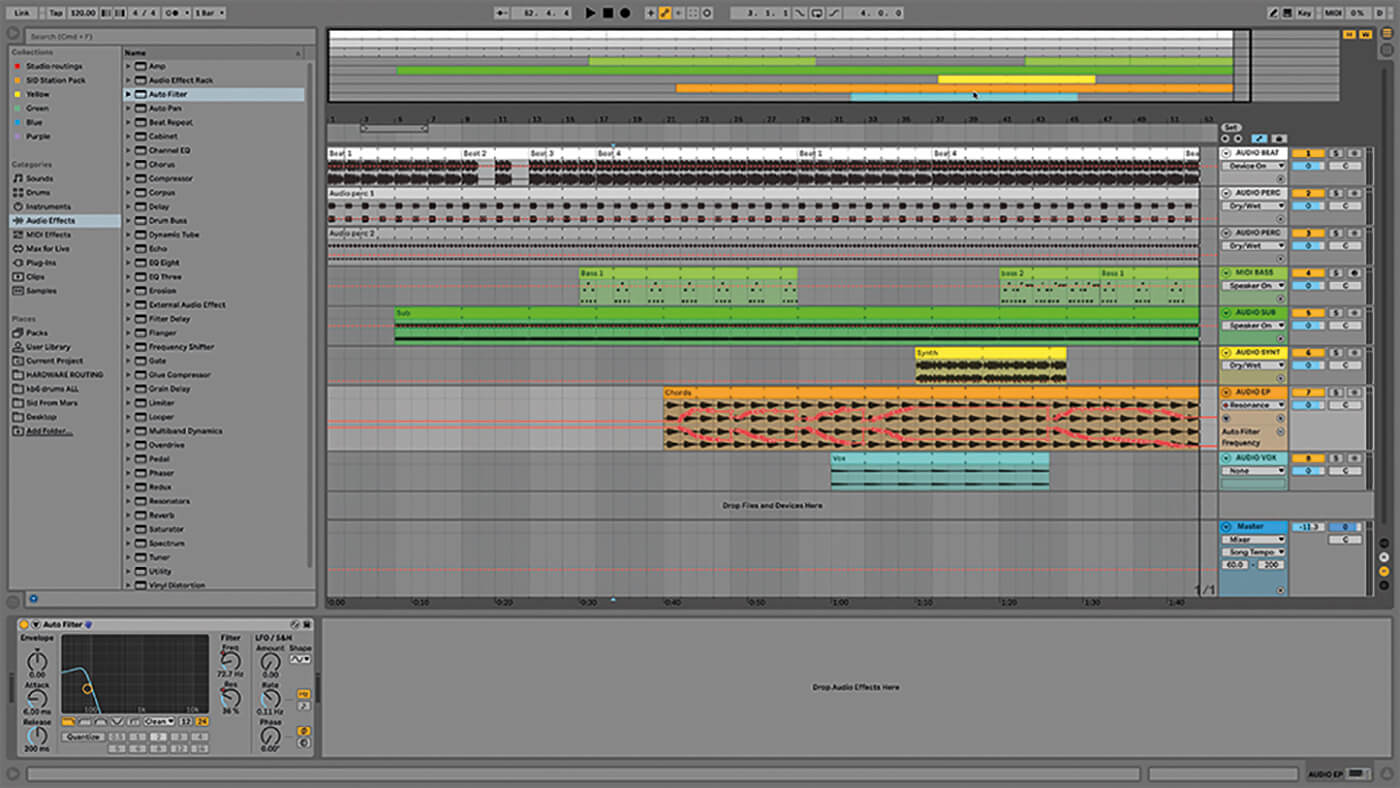 18. Unlike most DAWs, committing to an arrangement in Live feels far from a compromise. On the contrary, it’s liberating, and it’s enjoyably easy to make adjustments.