Inter-sample peaks are created as part of the D/A conversion process, whereby a reconstruction filter creates signal levels that exceed 0dBFS
The phenomenon of inter-sample peaks is one that seems to scare and confuse budding mastering engineers in equal measure. Some audiophiles insist that they are one of the many degrading qualities attributed to the so-called Loudness Wars, constituting a completely avoidable form of distortion. Others insist that inter-sample peaks are such a rare and unnoticeable phenomena that they deserve little or no attention.
So, what is the truth behind inter-sample peaks, and are they something that we should all be concerned about?

To understand what is meant by an inter-sample peak we need to take a closer look at signal levels in the digital domain, and, in particular, the process of digital-to-analogue conversion. As we all know, signal levels in the digital domain are represented by a fixed series of numbers, with the loudest recordable signal denoted as 0dBFS (0dB Full Scale). When a signal is recorded in the digital domain at a level that exceeds 0dBFS the result is a clipped waveform, with a corresponding set of samples ‘squared off’ at 0dBFS. Of course, most digital source recordings are left with plenty of headroom – all engineers steer well clear of the dreaded ‘digital over’. 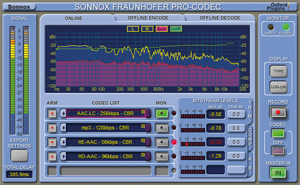 The process of mp3 conversion can also introduce unwanted distortion on peak signals, which is why Sonnox’s Pro-Codec is useful as a means of spotting these problems early on

When it comes to mixing and mastering, though, it’s increasingly common for engineers to run their final signal levels right up to 0dBFS. Indeed, a large part of the loudness attributed to modern music is created by aggressive brickwall limiting, which actively targets peak signals and pushes a master right up to 0dBFS without the waveform being audibly clipped. In a world in which level is everything, this approach makes complete sense, ensuring that your song is as loud – if not louder – than the competition. But is our fondness for pushing peak meters right up to 0dBFS a good strategy in respect to audio quality?

The problem with running masters up to 0dBFS is the assumption that digital signal levels are an absolute – in other words, nothing ever exceeds 0dBFS. However, there’s a whole area of our signal path to consider after we’ve set our final mix or master levels – that of the digital-to-analogue conversion process. As yet it’s impossible to stream digital audio directly into our brains, so every piece of digital music needs to be converted back into the analogue domain before we can hear it. As part of this conversion, digital-to-analogue converters employ a form of reconstruction filter – rounding-off (or interpolating) the stepped digital waveform and creating a smooth final output.

As part of the interpolation process, reconstruction filters tend to create some small differences in the eventual output levels. Of course, for a large part of our dynamic range these small level changes aren’t an issue, but on signals hovering near to 0dBFS even the smallest level change can be problematic. At this point the problem seems to vary between different grades of converters and the electronics that follow them. An audiophile D/A converter will allow for this headroom, but a cheap CD player won’t have the headroom for these inter-sample peaks. In short, your mix won’t sound distorted in the studio, but your peaks could sound decidedly clipped on a cheap hi-fi.

Although not explicitly part of the inter-sample peak issue, it’s also worth considering what happens to mixes that have been mastered ‘hot’ and converted to a lossy audio codec such as mp3. To achieve the desired amount of data reduction, many codecs employ various forms of filtering to reduce the amount of audio information, with lossier codecs usually applying more brutal filtering. As with the reconstruction filters in the D/A conversion process, this codec filtering produces some degree of level discrepancy between the original uncompressed audio file and the final data-compressed version. As you’d expect, the greater the amount of data compression used, the easier it is for audio to distort. 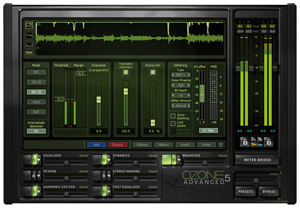 Having identified some of the causes and issues behind inter-sample peaks, what are the practical steps that you can take to avoid them? The most immediate solution, of course, is to allow some degree of headroom between the peak levels of your master and 0dBFS. The only issue here is differences of opinion between recommended practices, with some audiophiles insisting that -3dBFS is the only safe peak level, while others are happy to run the master up to around -0.3dBFS. The problem is that the appropriate margin of safety is hard to define given both the huge variations between CD players and DACs, as well as the inherent dynamic and timbral qualities present in the music.

Another relatively simple remedy to the problem of inter-sample peaks is improved metering, as found in plug-ins such as SSL’s X-ISM (www.solidstatelogic.com ) or, in the case of data-compression distortion, Sonnox’s Pro-Codec (www.sonnoxplugins.com). In the example of the X-ISM plug-in, a digital Finite Impulse Response (FIR) filter is used to model the typical interpolation applied as part of a D/A conversion, which, in turn, is fed to an ‘analogue’ inter-sample clip indicator. In theory, the meter indicates when inter-sample peaks are likely to occur (although, of course, there’s no absolute way of telling), enabling you to set the final headroom in a more informed way.

Given its ability to apply codecs in real time, Sonnox’s Pro-Codec also provides the option to identify any unwanted peak distortion before the final file is rendered. Of course, in the example of audio data-compression, you have the potential to negate the unwanted distortion by increasing the headroom, or by changing the amount of data compression applied (higher bit-rates produce less distortion). As with the aforementioned X-ISM plug-in, though, it enables you to make a much more informed decision about your eventual headroom and, to some extent at least, the amount of limiting applied, without any shocks occurring later on.

As well as increased headroom and improved metering, it’s also interesting to see a number of ‘inter-sample-aware’ products being released. iZotope’s Ozone, for example, includes an Intersample Detection mode as part of its Maximizer controls. With the Intersample Detection mode active, Ozone’s Maximizer effectively applies its brickwall limiting based on the post-D/A conversion levels rather than the current level of the digital sample. In short, it’s a form of intelligent limiting based on the eventual signal levels, making it a simple but effective tool for negating inter-sample peaks yet still achieving maximum loudness.

The issue of inter-sample peaks is an inevitable by-product of the Loudness Wars and the lack of regulation and standardisation in the music industry. To a large extent, the problem of inter-sample peaks could be easily negated by an accepted peak level of -3dBFS, following the lead of other industries such as film and TV broadcast, where prescribed final signal levels and loudness standards are strictly adhered to. The music industry, though, has a distinctly more cavalier attitude, with loudness seeming to be all that counts, and that audio quality is often the least important point on the agenda. The irony, of course, is that peak levels aren’t the principal component of loudness, but instead formed by the averaged RMS levels.

As more engineers, musicians and listeners of music understand the phenomena of inter-sample peaks, though, it becomes increasingly easy to start making more informed choices about how our music sounds. Arguably, industry-driven initiatives such as ‘Mastered for iTunes’ illustrate that there’s a degree of reappraisal happening concerning issues such as loudness and data compression. In the future, therefore, there may well be a move towards less distortion and higher bit-rates, meaning that inter-sample peaks could become a thing of the past.

This video from Fabfilter pro explains and explores inter-sample peaks: