Zynaptiq Intensity Review – Adding Some Colour To The Mix

If you’re in need of a helping hand with your mastering, Zynaptiq may have just the plug-in to add some colour. Dave Gale gets intense with his mixes 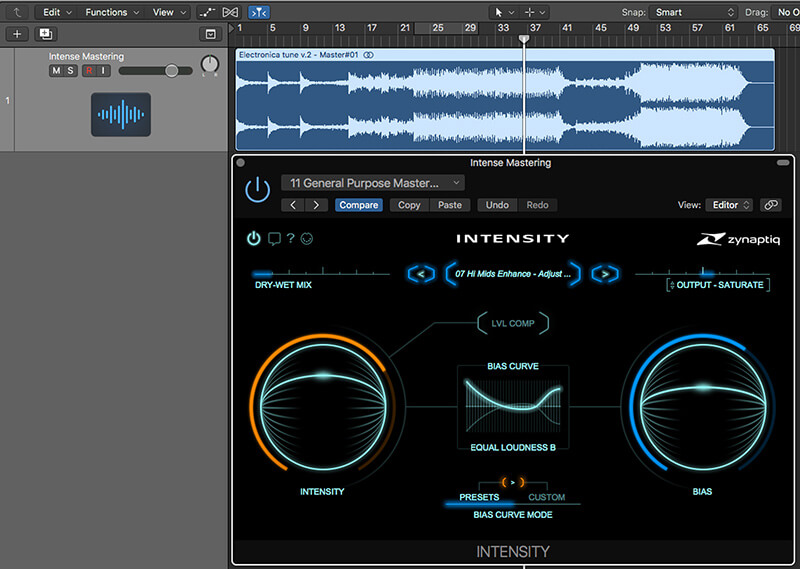 For many of us working in the DAW-centric environment that we either choose to, or have to, can offer enormous benefits, not least of all for workflow. However, getting our musical visions out into the big, wide world generates the question of whether to master our tracks or not. Thanks to those clever folk at Zynaptiq, they might have just the plug-in to ease the rhetorical decision into a far more definitive affirmative.

Quick recap: when looking to master a track, I always tend to think of the process as casting another set of ears across a mix. It’s for attending to any little troublesome niggles, such as resonant frequencies, while improving the overall colour and sonic makeup of the track, often adding compression along the way.

It’s these essential components that Intensity aims to work with, but to offer it all to you on a simple-to-grasp plate.

The first visuals, which you can’t miss when opening the plug-in, are the Trackball Sliders which are located left and right. In operation, these have a particularly pleasing feel, allowing for easy clicking and dragging, or shift-clicking and dragging for a finer degree of resolution.

Directly above these Trackballs are Faders which control the Wet/Dry mix on the left, and the Output amount on the right. Similarly, these have a nice useable feel about them, allowing for either clicking and dragging, or clicking on a specific point on the horizontal scale.

This does take a moment to get used to, but if you inadvertently forget what you’re doing, Control-clicking any of these parameters will return the setting to its saved default. Having established how to handle the assets, it’s now time to put something through the Intensity engine and hear what comes out of the other side – and just how good it is.

For maximum clarity and effect, my first move was to select the vanilla Default plug-in and add elements one after another. There are several preset patches which are delightfully labelled with helpful descriptions, such as ‘Just slightly better’, but thanks to the Dry/Wet mix, the amount of colour that is dialled in is under complete control.

Going full Wet, to get the clear picture, it’s the Intensity Trackball that really applies the magic; the algorithm under the hood is doing a great job of picking out the components that are viewed as detail, and bringing them to the fore.

By the very nature of this particular beast, rhythmic elements will be perceived as detail, particularly elements such as hi-hats, but this is far more complex than a mere rise in high frequency EQ. A subtle sheen of coloured detailing appears, like a veneer across the mix, which sounds pretty wonderful, unless of course you push it so far that it appears to become slightly fuzzy.

Certainly, there is an argument for applying Intensity to individual tracks or stems, and Zynaptiq does warn that if applied to vocals, you might start to hear a lisp-type quality, in which case common sense dictates that a little backing off is required. While continuing to experiment with different tracks and stems, the area that really fascinated me the most was where Intensity was affecting the lower-mid frequencies.

There’s a beautiful element of tightening that occurs, which is again much more detailed than plain compression, although it is heavily linked to the Level Compensation component, which is simply toggled on and off. The purpose here is largely self explanatory, as activation will bring the various affected elements under a greater degree of control, much like compression.

I found a couple of very interesting points relating to this, namely that when Level Compensation is activated, it could offer a very controlled output, and one that, with heightening of the Intensity control, could sound rather unpleasant, in that overcooked way.

Yet with a little backing off and coupling with a blend between Dry/Wet, just the right balance is easily achievable. As one might expect, leaving the Level Compensation defeated offers a highly dynamic performance, while keeping all the richness that Intensity applied, to the extent that you might be tempted to reach for a compressor to operate post-Intensity.

Experimenting here, I added a simple 1176 styled FET compressor, to hear all those dynamics placed under further control. It showed that on a track or sub mix level, Intensity could end up being a boon in getting things to sit, mix wise, and works well alongside other plug-ins.

There’s no doubting that Zynaptic Intensity is a very easy and effective plug-in to use, which has the capacity both as a mastering plug-in and as an effect to be inserted across an instrument channel. The essence of what it does, and the way in which it does it, will appeal significantly to those who have less experience at mastering, and could possibly act as a second set of ears if monitoring is lacking. 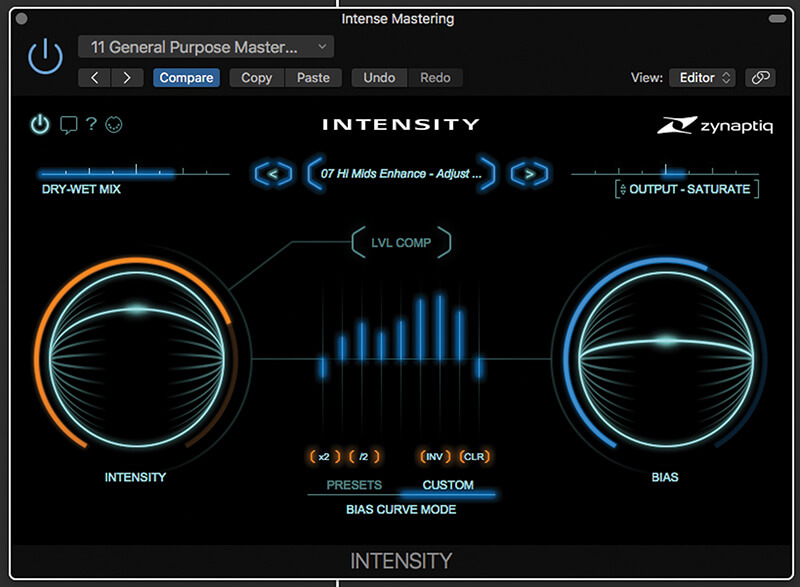 However, thanks to the ingenious algorithms under the hood, Intensity could be a significant time-saving tool for professionals working against the clock. It’s highly effective, but comes with a reasonably warm price tag, which in many respects resonates with the quality of what it offers, but this may be a little off putting to those people on a budget.

Moving to the Trackball Slider located to the right of the plug-in, and we turn our attention to the BIAS feature. Operation is largely the same, except here the bi-polar control will both exaggerate or lessen BIAS, according to its positive or negative position.

In extreme, a gain of +12dB can be applied, but this is delivered in cahoots with the Intensity Trackball and settings made in the central BIAS panel. A number of preset curves may be selected, or a Custom Mode will allow for any user settings to be made, as required.

In use, this is a terrifically simple and effective way of working. Even exploiting the preset curves, the interplay with the Intensity Trackball is such that it was an absolute breeze to flick through and find something that sounded good pretty quickly. However I particularly liked the fact that switching to Custom would allow for personal control, outside of the one-size-fits-all box.

Directly above this area, the Output Gain fader can be switched quickly to a saturation effect. It didn’t take much for me to hear this in full flight, as saturation kicks in at -3dB, and out of all of the elements within Intensity, this was the one that seemed to offer slightly less control.

Sure, the Soft-Knee resulting kick sounds nice enough in the right context, but it did seem to come on very quickly, but this is reliant on other settings elsewhere. Drive the processes less hard and it’ll deliver less.

This feels like quite a humble mastering tool, equipped to add a little, or indeed a lot of colour to a mix, in a hassle-free no-fuss way. Armed with a reasonable selection of presets, it’s quite easy to find something that will suit your track or stem, and in doing so allows for enough tweak-ability to make its use quick, efficient and actually pretty pleasurable.

The interface is delightfully elegant, while the ability to blend the Intensity via the Dry/Wet mix, means that you can add colour, without going to extremes, but it will make a difference.

It reminds me a little bit of the Aphex Aural Exciter with Big Bottom (a product name I have not made up, I assure you!) which offered very similar colourations but in a far less pragmatic way. Who wouldn’t want to make all of their mixes that little bit more intense? Zynaptiq, it seems, would have to agree with you! 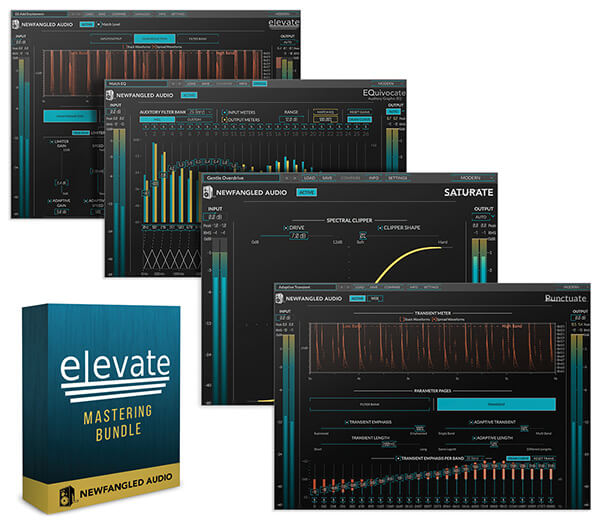 This bundle offers a cornucopia of tools which will look after general mastering duties and offers other great effects such as Saturation and Transient emphasis, making it comprehensive and competitive. 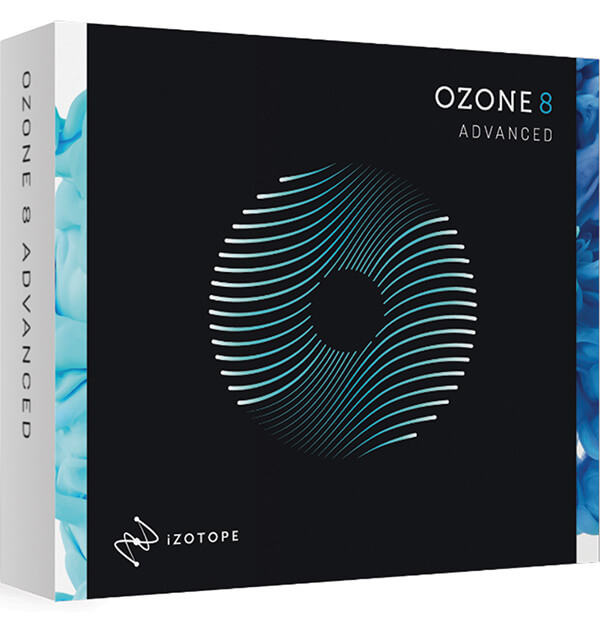 One of the stalwarts of computer based mastering offers plenty, with a number of packages designed and priced to suit anyone from bedroom producers to top-flight composers. It ships in both standalone and plug-in versions too.