Packed full of strums and plucks, Zero-G’s latest offering gets rhythmic and inspiring with guitars. Dave Gale feels the groove… Price £59.95 Contact Time & Space | www.timespace.com | 01837 55400 Speaking as someone who struggles to manipulate his fingers into certain chord shapes, guitar packages offer an invaluable addition to my setup. With Inspiring […] 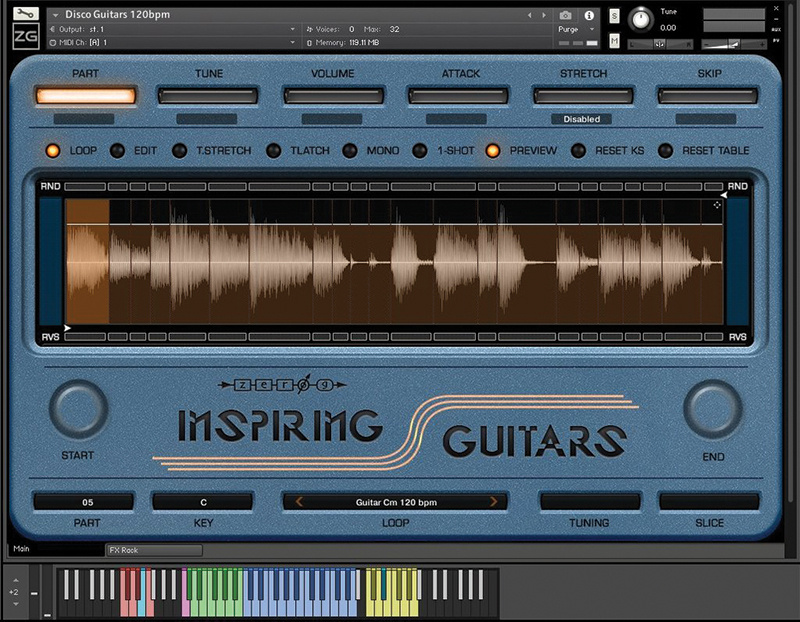 Packed full of strums and plucks, Zero-G’s latest offering gets rhythmic and inspiring with guitars. Dave Gale feels the groove…

Speaking as someone who struggles to manipulate his fingers into certain chord shapes, guitar packages offer an invaluable addition to my setup. With Inspiring Guitars, Zero-G is offering a library of largely chordal groove-based loops, with occasional picking interest that is directly linked to the selected style and genre, as is the choice of acoustic or electric instruments. You’ll not find any mangled guitar sounds here, unless you do so from within the included FX rack.

The triggering of samples is generated by playing within the given key switch zone. There are four zones, the third of which triggers the sample loop. Each key within this triggering zone will begin the loop/phrase from a different point, so it’s possible to displace the originally intended start point in favour of starting on a different beat of the loop.

The additional keyswitches offer the ability to change the root note of a chord and alter the chord type, but the keyswitch selection process is a little confusing and over-complicated. The user will need to trigger at least two keyswitches to dictate the playback of a chord other than the default. Choosing a chord by simply playing the notes you need would have simplified things considerably.

The mere toggling of chords from major to minor also feels complicated, due to the requirement for a third keypress. With four keyswitch zones at play, it could get confused. If you used this package a lot, you’d become well versed with its intricacies, but it will take a little time and effort to find your inner Nile Rogers.

When it comes to the package’s actual sonic credentials, there is plenty to applaud, such as a very interesting collection of stylistic tendencies within. Funk and disco-styled loops offer extended chordal colours, dwelling side-by-side with more worldly loops, in the shape of Brazilian and rhumba-styled guitars. The choice of instrument is dictated here, so commercial genres will prompt an electric voice, while Brazilian and rhumba patches are more acoustic in flavour.

The recording colour is crisp, bright and up close, meaning that in use it sits in the mix beautifully, although to my ears there is the occasional tuning discrepancy and timing issue. These niggles aren’t a problem, unless the intention is to loop phrases endlessly, at which point the continued revisit of the same issue could become problematic and emphasised.

A route around this problem may be to employ the MIDI template Drag and Drop. Although an advertised facility, any description within the manual seems to be lacking, so an educated guess took me to a small icon in the upper right of the waveform display. 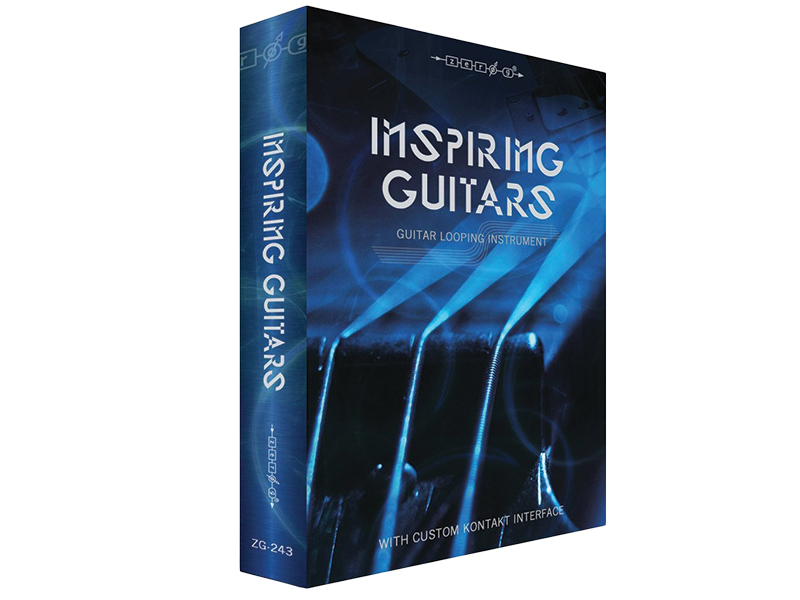 Another small annoyance here is that the seemingly two-bar loop, imported as a three-bar loop, required immediate editing to reduce to a two-bar phrase, presumably because the final MIDI event exceeded the two-bar constraint.

But hey-ho, a little editing and the loop was in my DAW and open to a degree of further editing in timing and position. In this guise, the exported MIDI object is akin to a good old-fashioned Recycle-style format, which will be familiar to many programmers.

Within the Kontakt interface, it’s possible to undertake numerous further edits. You can randomise or reverse steps, or go as far as time-stretching individual steps. This can all be carried out in a non-destructive manner, with a reset allowing for experimentation, without fear of damaging the core.

Included in the package is a pretty comprehensive set of effects. There was minimal application of this within many of the patches, enabling the user to go deep and experiment with many colours, from basics such as Distortion and Overdrive, through to Amp and Cabinet simulators.

There is no doubt that Inspiring Guitars is a very good sounding package, with a surprising amount of content within the selected number of genres. But with only eight categories to choose from, and with a certain degree of repetition, this will fall short of covering all bases by some distance.

Surprisingly, there are no out-and-out rock-based phrases, although the use of lower voicings and a healthy dose of distortion could achieve something with a nod to this stylistic ballpark.

I found the general operation of the triggering to be quite clunky and limiting, so I’d be drawn to working with the MIDI. But this won’t get around the issues of easily varying the loops within a track, so this package will lend itself to more mundane and repetitive duties, which is a shame.

Of course, the price point is very competitive indeed, and there’s lots to praise within, particularly when it comes to the sonic clarity of what’s on offer. It’s really nice to see the inclusion of different guitar colours, such as the acoustically-driven Rhumba Guitars and Brazilian Guitars, but should this have been at the exclusion of other more functional guitar styles? That depends on the sort of work you’re doing and if it fits your workflow and budget.

My overarching sense is that this is a good quality package at an exceptionally good price point, which will allow many to get the flavour of guitars they wish for, without the financial hit. However, it will come at the price of needing to spend some editing time to get it to work for you, although it will sonically perform really well.

If you need a library of guitars which are pop, funk or acoustic-biased, and you’re on a budget, this is the sort of package that will interest you. It doesn’t compromise on sound, which is the most important factor, but there will be limitations elsewhere, which could make it less desirable, such as the lack of rock-based content. The ability to import MIDI templates means that you’ll be able to control what it does more easily, so it will work well alongside any good DAW package. 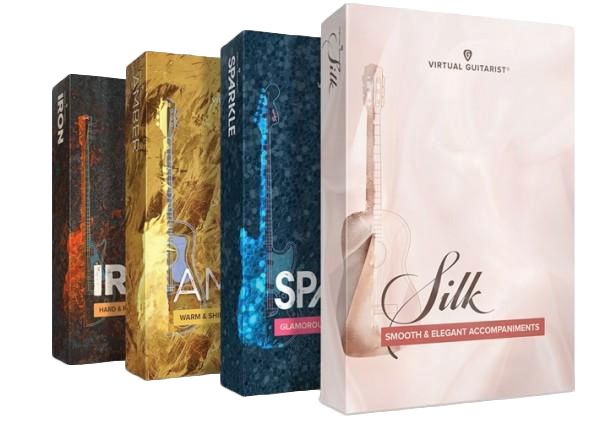 Regarded by many as the original software for guitar emulation, this series from Ujam offers a number of guitar styles and grooves, across individual products or as bundles. It’s comprehensive and easy to use in a track. 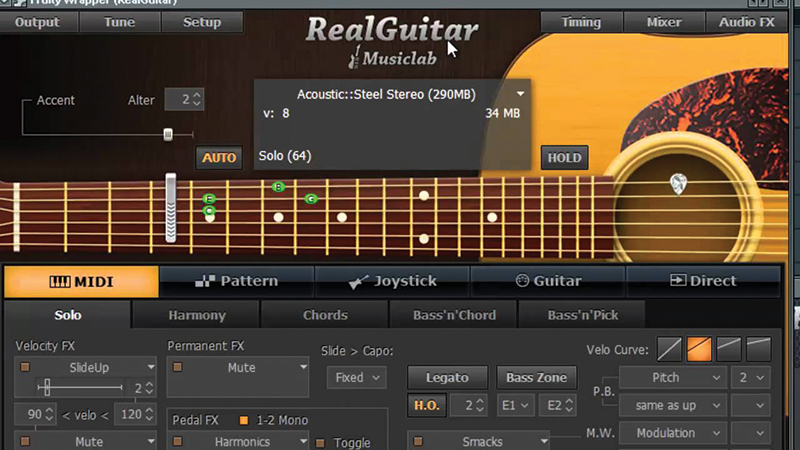 Offering a thorough choice of instrument, the Real Guitar series is very comprehensive, with plenty of options for guitar voicings. For greater realism, connect a PlayStation Guitar control as a MIDI control.