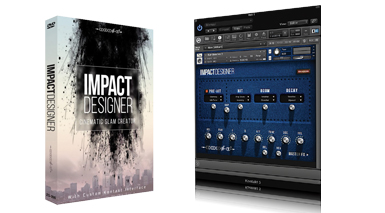 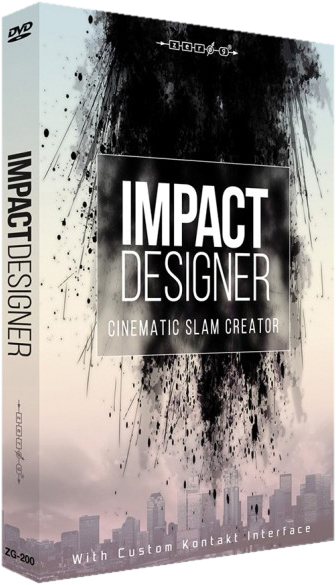 Try to imagine a film trailer nowadays without the a variety cinematic slams, booms, braahms and drops being used to add dramatic impact, often at ear splitting volume – it’s almost unthinkable. And while there’s plenty of libraries offering a selection of these cinematic hit sounds, it’s interesting to see a number of sample developers starting to exploit Kontakt’s powerful sample scripting as a means of providing something far more exciting than a series of one-shot samples. Zero-G’s Impact Designer is a perfect example of this, with a host of features that enables you to build and customise a range of powerful cinematic sound effects.

Working with a full version of Kontakt 5.3.1, Impact Designer provides 507MB of raw data, all beautifully stitched together using its own custom-built GUI. The concept behind the package is that an ‘Impact’ can be split up into three constituent components – Hit, Boom and Decay.

By mixing up the material provided with Impact Designer, the user theoretically gets a near limitless number of possibilities, allowing the end result to have some degree of originality (which is an increasingly desirable ingredient in a world full of sample libraries) as well as being able to tweak and refine the presets to match your specific musical needs. 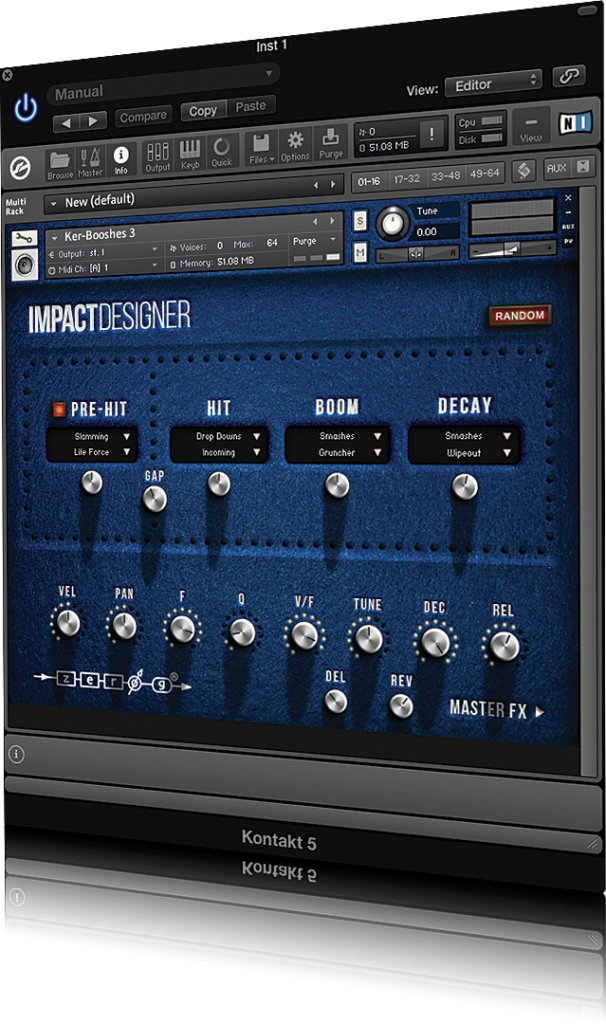 Despite being designed as a creative tool in its own right, Impact Designer still comes with a healthy collection of presets to get you started. The folder structure gives you plenty of idea what to expect, with sections for Slams, Ker-Booms, Whooshes, Deep Impacts, Reverses and so on.

Once you’ve loaded a patch, it’s clearly apparent what’s happening thanks to an animated sequence of lights that guide you through the progression of the sound – from Pre-Hit, to Hit, Boom and Decay. Glancing across the GUI you can see the various sound sources that have been loaded into the respective eight slots (two per section), all of which can be adapted as you see fit.

As the name suggest, the optional Pre-Hit section offers a variety of reverse sounds that lead up to the main hit. An additional Gap control then adds the required amount of dramatic silence before the hit, which is an effect often employed in contemporary trailers to add dramatic impact.

The Hit, Boom and Decay section all correspond to the main impact sound, enabling you to favour a sound with more percussive bite, for example, or a sound that’s deeper and longer in duration. As well as the obvious sound selection, you can also specify the amplitude for each section, and you can employ a filtering and effects option that can adapt the basic samples far beyond their original scope.

Obviously, despite a great GUI, the strength of a library like this ultimately comes down to the sound content. As you’d expect, Impact Designer has all the power in the right places, often sourced from unusual acoustic sources that have then had the required amounts of grit and gravitas added through the addition of effects such as compression and distortion.

In short, Impact Designer sounds like it should be in the cinema – that said, any music that enjoys a spot of dramatic energy (which could include everything from Dubstep to EDM) could well do with exploring what this intriguing library has to offer.

Although the sonic output of Impact Designer might not be entirely unique to the market place, there’s little doubt that the combination of a flexible GUI and plenty of creative sound content makes Impact Designer a tempting proposition. Certainly, the possibility of creating your own custom-designed cinematic effects makes the whole package feel less generic, and more importantly, you can be confident that the sounds that you create are more individual to your music. Ultimately, Impact Designer needn’t be the end of the creative process, but a spark to drive further sonic exploration. 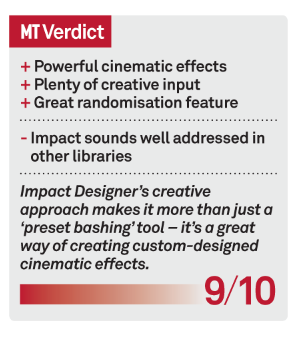 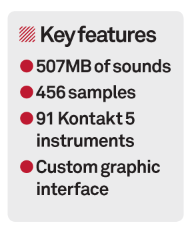