In our never-ending quest to continually expand our sonic palette, it’s time to zero in on the new Herz-OG. We examine some classy frequencies. 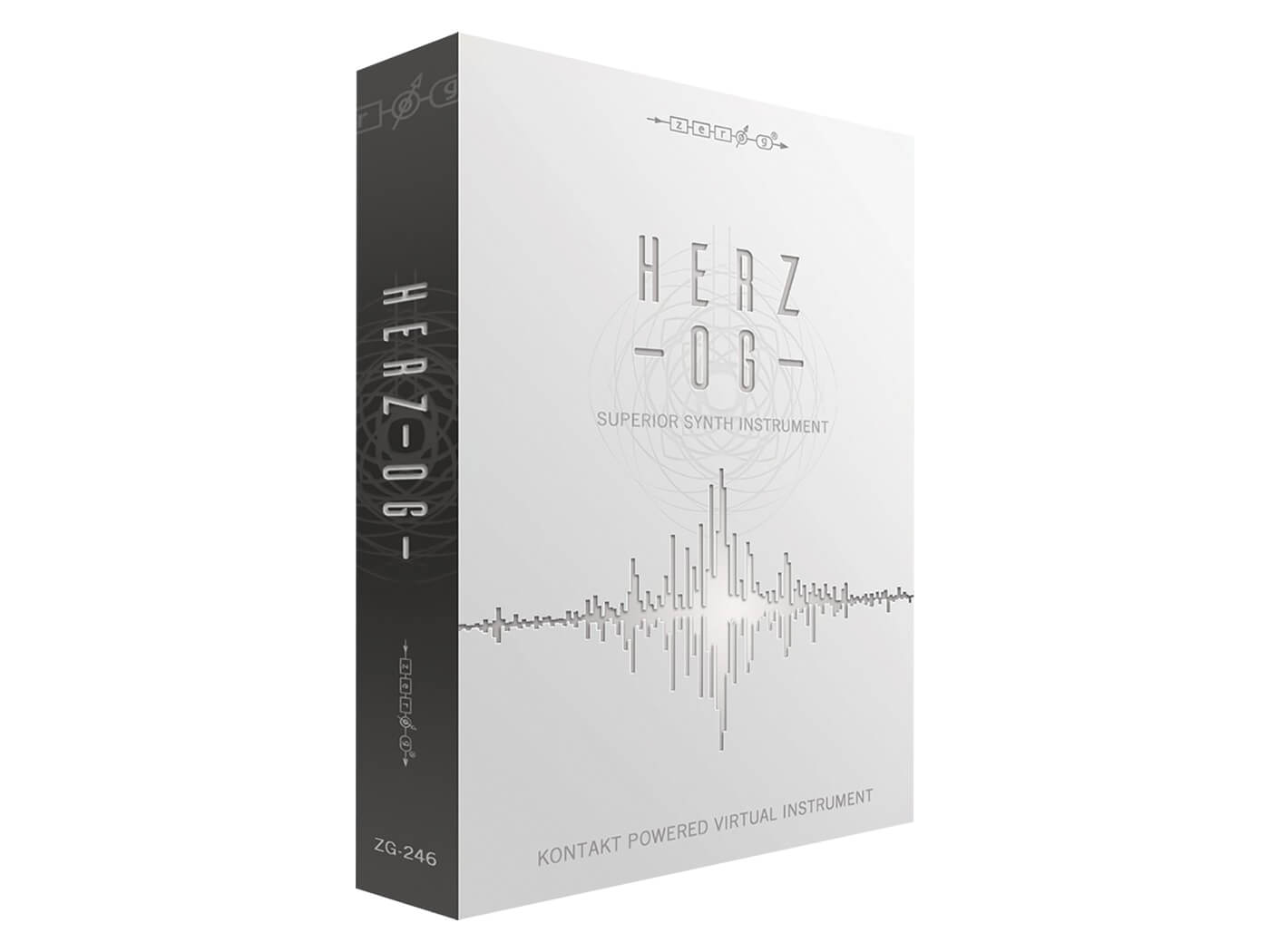 Zero-G has been getting very creative recently with some exceptionally interesting products, as I recently saw with its excellent Ethera EVI package. This latest offering brings us a very tweakable and useful sample-based synth in software form.

Once you have the installation process out of the way, the one thing you can’t help but notice upon loading Herz-OG is the classic look and design. Clearly, a great deal of effort has gone into making this look neat and tidy, while keeping everything simple and clear to read and use.

The only initial drawback is that you’ll need to have the full version of Kontakt to use Herz-OG, as it does not conform to the NI Library standard, which means you’ll need to navigate via the file hierarchy to load and gain access. This isn’t the biggest of issues and to my mind presents more of psychological barrier than anything else, as you’re simply not presented with the library-based eye candy that you would get with NI-styled packages.

Herz-OG offers a reasonably large working area, with sensibly sized pots that are easy to control with a mouse. It’s clear to see where they are thanks to the colouration of the dial, which illuminates around the circumference.

Sounds wise, this is predominantly a preset soft synth that invites the user to tweak away. Thankfully, there’s a large number of presets, which serve as suitable starting points for most scenarios. Pads and choirs nestle next to synth basses, leads and electronic drums, although patch recall is made through Kontakt, which can make the process feel a little long-winded. There’s no drop-down or patch-selection screen, which is helpful when looking through categories of instrumentation.

Once a patch is loaded, there’s plenty of scope for sound control and alteration. This begins with the sample-control section, which dictates sample start point and analogue feel, largely moving the fine tuning around on a per-note basis in order to mimic an altogether more analogue persuasion. There’s also a Saturation control, which will see the sample fade into overdrive, working especially well on those super-saw pads and searing leads. 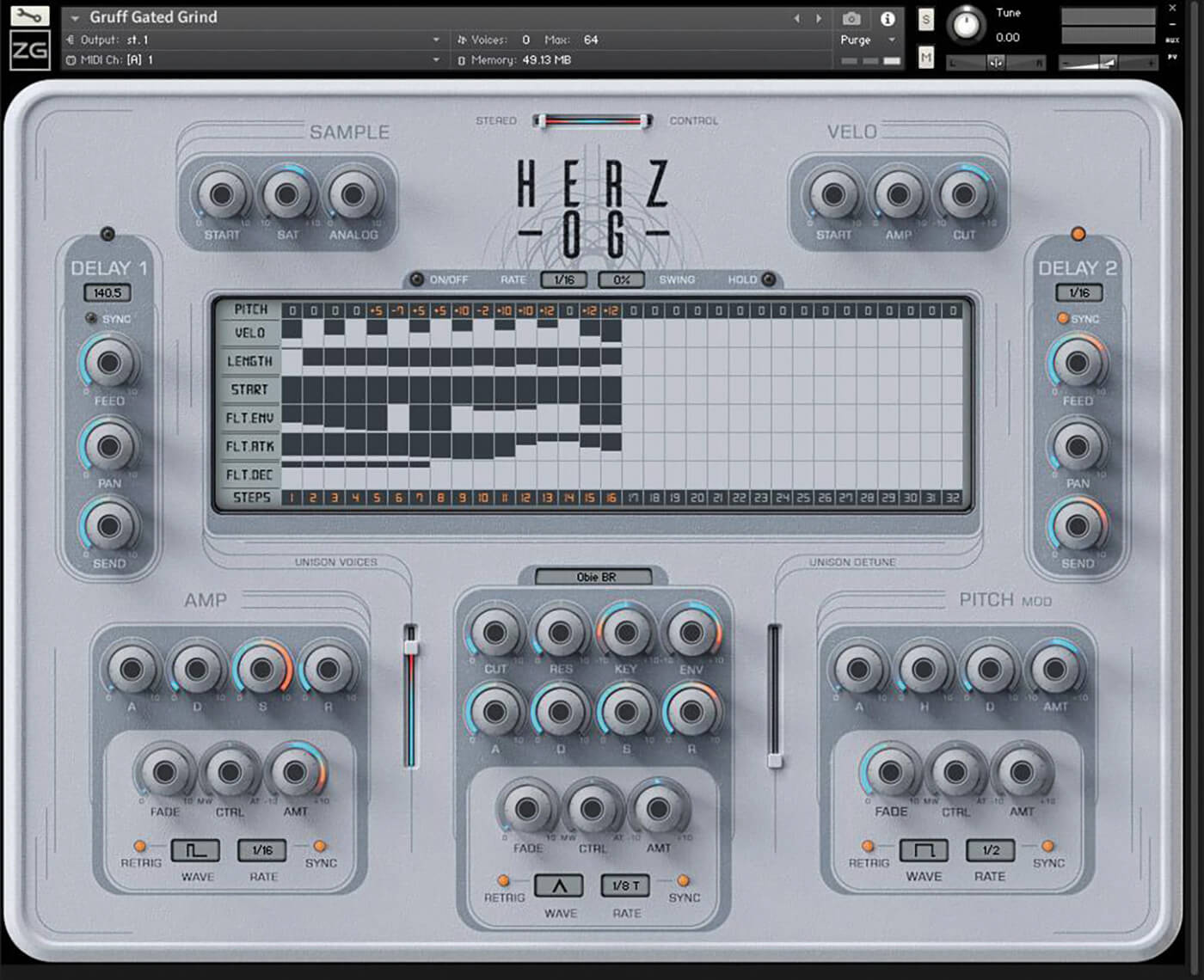 Right at the top, in the centre, is a Stereo Width control, which I found to be a real help when mixing. It’s always a temptation with great-sounding synths to simply load them into a track and fill up the frequency void, which Herz-OG can do very quickly. So having a Breadth control right in the centre of the synth allows for a narrowing of the stereo image, aiding placement in the stereoscopic spectrum.

Moving to the lower part of the screen, we’re offered three envelopes, which are directly linked to amplifier, filter and pitch. The first two offer predictable ADSR envelopes; these are great when in use, as each pot offers a fine amount of control until it reaches the 12 o’clock position, at which point the amount of attenuation ramps up for greater swathes of modulation.

The pitch envelope, on the other hand, is based on an AHD format, modulating up to a full two octaves either side of the fundamental pitch.

Also found within the three dedicated areas of amp, filter and pitch are dedicated LFOs, all of which are equipped with 11 wave types, ranging from sine and triangle through varying degrees of pulse and square, to a full-on stepped Random setting. There’s an independent Amount control available for each, along with a Fade/Delay control, which is pretty handy, although I did find that it does seem to kick in pretty quickly, even when set to maximum delay.

Given the nature of the Herz-OG, it’s likely you’ll want to make significant changes to the filter, and Zero-G has equipped the Herz with more than enough flavours to fulfil most potential needs. The Mogue and Obie filters offer a passing resemblance to their namesakes, although – as is often the case with digitisation of filters – they can quickly descend into a state of whistling once the resonance is brought into play.

In both of these classic cases, they offer more of a nod than an exact replica to the original, but we also have to take into account the sample-based elements here, which would not have been the original setting for either of these filters. That said, they are good enough, but I was drawn sonically to the clean filter – with its crisp architecture, which I thought sounded really usable – along with the intrigue provided by the vowel-based filters. 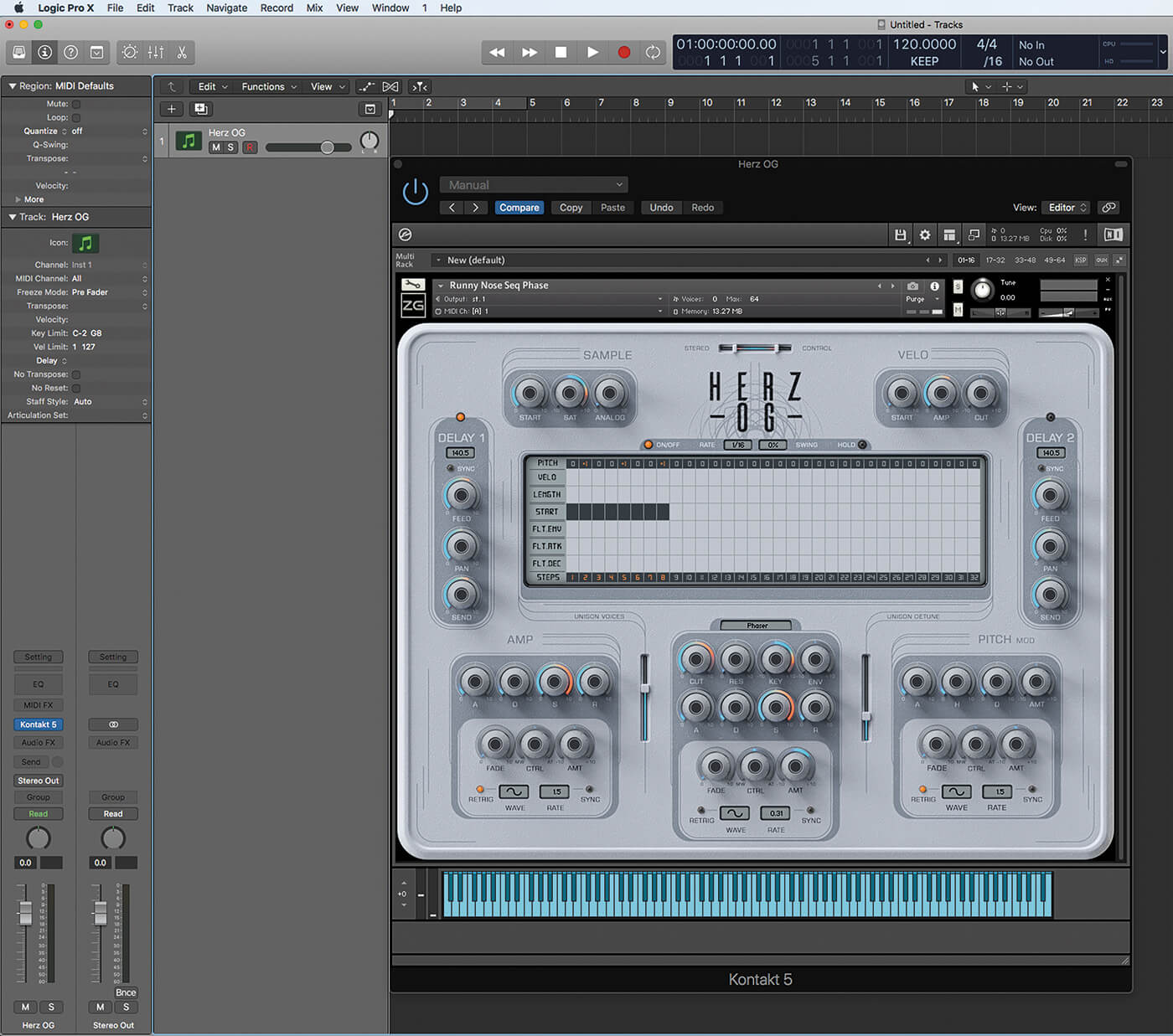 I’m a sucker for anything which can imitate human throatiness and the examples here are subtle, but great sounding. It’s also worth mentioning that most of the filters are available in high, low and bandpass iterations, but regrettably, it’s not possible to have more than one available at a time.

The one component that we are yet to mention is the Sequencer Matrix, which is large and located in the centre, offering seven lines of control on up to 32 steps. Elements for control include Pitch (which includes arpeggiator-like duties), Length, Sample Start Point, and various elements that are connected with the filter.

Drawing information onto the Matrix is very easy, allowing for quick and easy results, which can be clocked to the DAW. Clock division and swing can also be set at the patch level. Include the fact that all of the LFOs can also be clocked and set to retrigger, and it adds up to a powerful little sequential bundle – one which I found easy to use and very entertaining.

It would be something of an understatement to say that Herz-OG is a very capable synth. It has the capacity to sound very epic, which I believe is largely down to the wealth of huge-sounding sampled content, and will make a perfect plug-in for electronic-music production and soundtrack work. We also have to consider that it’s inexpensive and taking this into consideration, it more than stacks up sonically – in fact, it stacks up way beyond this price point and gives more-expensive players a serious run for their money.

Where I feel it lacks is as a synth that will allow for creation from the ground up, where the user will be forced to delve into the world of the Kontakt Editor, while the straitjacket of the Kontakt form makes it a little tiresome when loading patches; hardly the fault of Herz-OG, but it does make it more difficult to browse for your sounds, which may well influence when and how you use it. Overall, though, this is a very creative package.

Herz-OG is a very powerful sample-based synth that’s stacked full of content. It will suit anyone working in the electronic music making domain. There’s plenty of onboard control through modulation, as well as the ability to assign elements to MIDI controllers or automate through a DAW – and thanks to the plethora of included samples, most producers will find plenty of sounds to use and work with.

As a ground-up patch creation device, it is less appealing, as it has limitations, but this certainly doesn’t diminish its usability. The onboard controls are clear, tidy and sound great, while the sequencer elements add a great dimension. For the price, I think that it represents excellent value too. 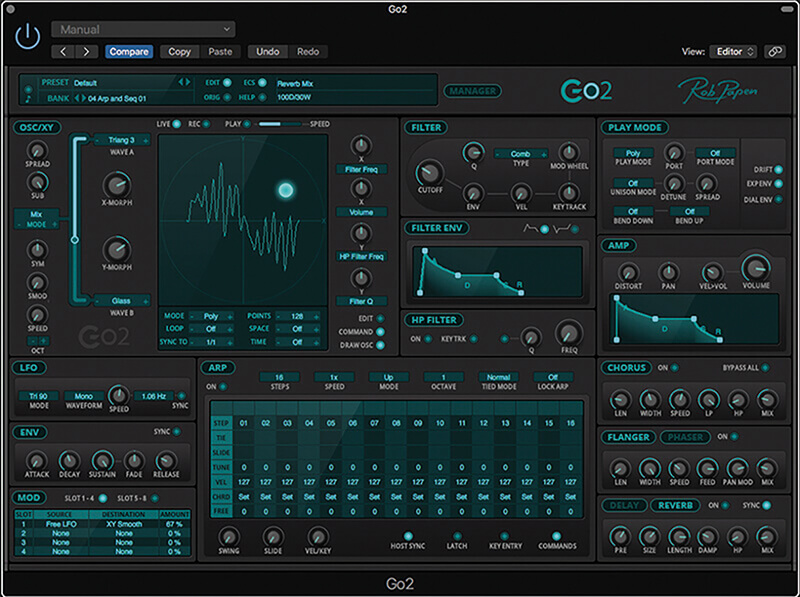 We thought this great little synth from Rob Papen was an absolute knockout, offering plenty of presets and huge programmability for an incredibly affordable price. It’s also available as a limited demo, so you can try it before buying. 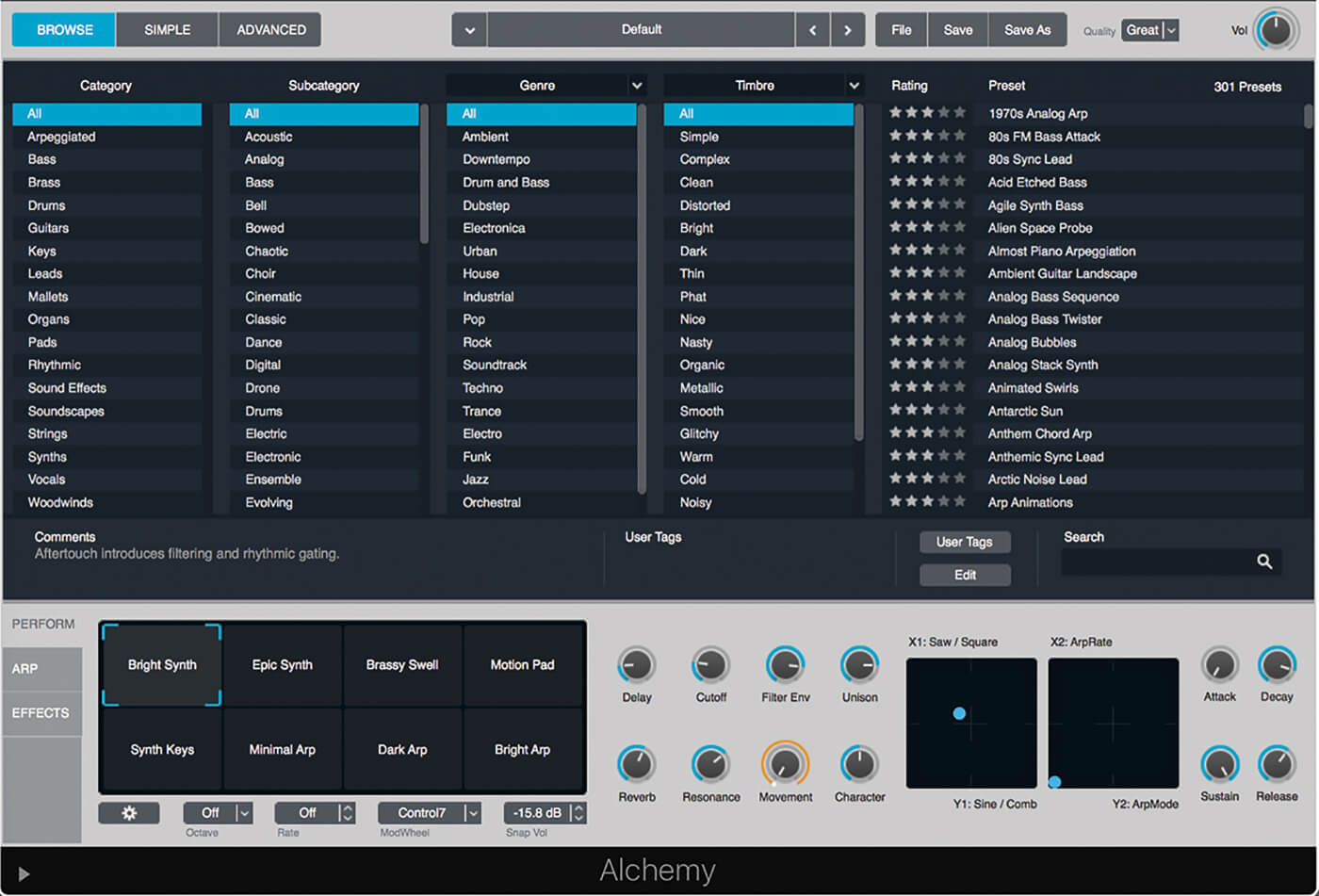 Provided you are an up-to-date Logic X user, you’ll have Alchemy already. Originally made by Camel Audio, this excellent sample-based synth is a powerhouse for creativity, sounds great, is highly programmable and is very hands-on.