The latest instrument in the Ethera series combines vocals, synths, pads and oodles of atmos. Sounds right up Andy Jones’ alley… Details Kit Ethera Manufacturer Zero-G Price £77 Contact Time+Space Web www.timespace.com System requirements Kontakt files for the full version of 5.6.0 or higher on Mac or PC I do like a little bit of […] 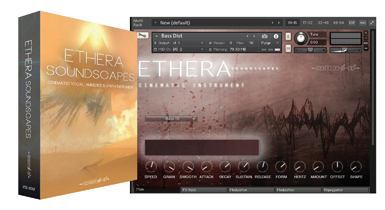 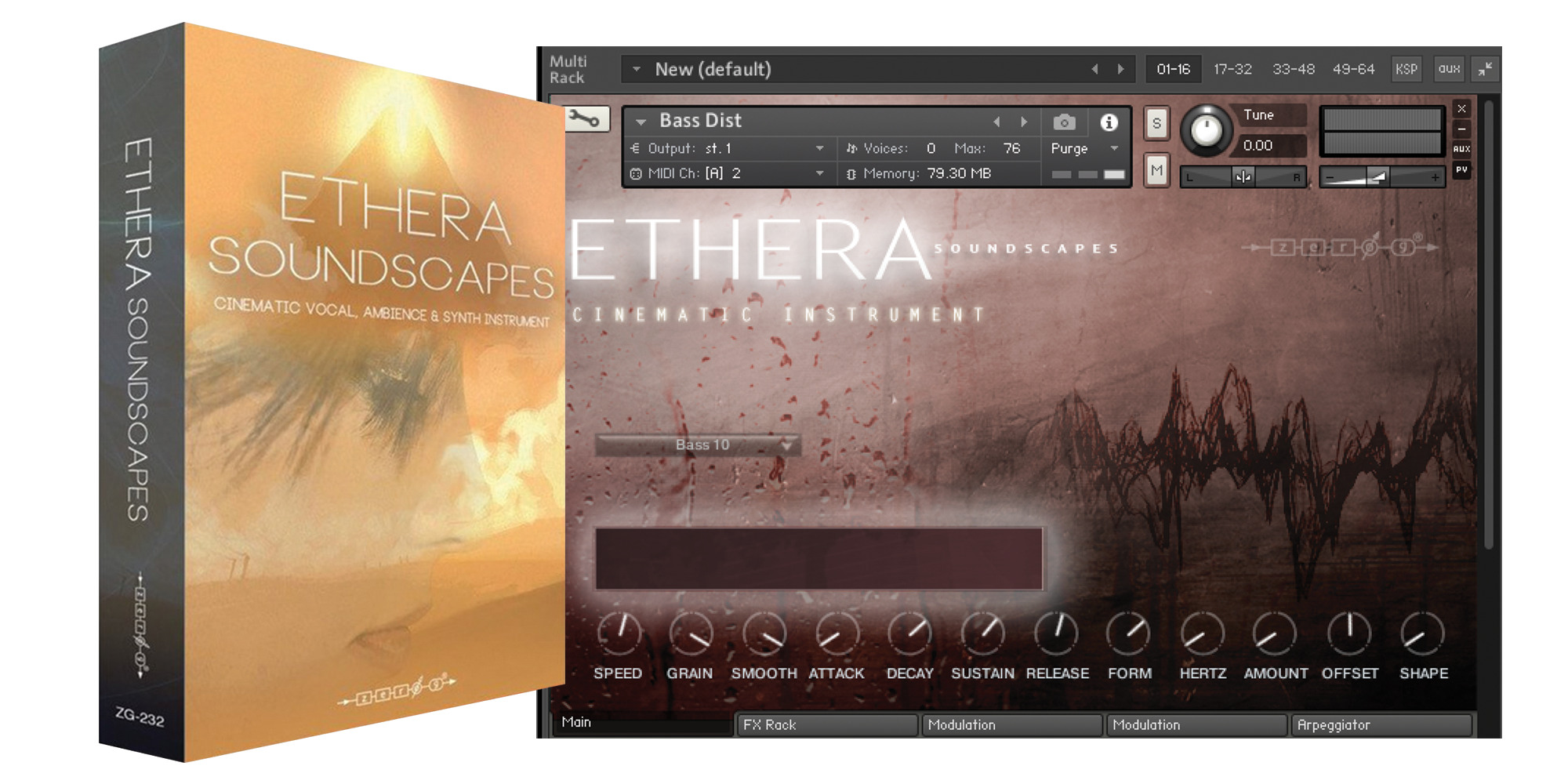 I do like a little bit of atmosphere and fantasy in my instruments. Give me a massive collection of alien synths or an Eduardo Tarilonte vocal collection over an emulation of an electric guitar or a real orchestra any day. I want my music technology to take me out of this world, not to emulate what we already have (and preferably to take me to somewhere a bit saner, now you’re asking).
So what we have here is the third instalment in the Ethera series – the clue to its musical direction being in the name.

However, whereas Ethera Soul and Ethera 2 Cinematic concentrated on ethereal vocals, Soundscapes contains not just more vocals, but synths and ambient sounds, too. Of the three, then, this looks like the most rounded collection for soundtrack composers, as you should have everything here you need for maximum atmosphere, bar the beats.

You’ll need the full version of Kontakt – and also, as I found, the latest version – to run Ethera Soundscapes. It’s a reasonable 14GB download via the Continuata platform (a decent download tool, which identifies what you’ve bought from the code you buy and downloads it, which can also be easily paused and resumed).

Patches are spread over Synth, Ambience and Vocal folders. Some are raw samples and most use the Ethera engine to create instruments. The engine itself is pretty well spec’d, as you’ll see top right. You get a main screen, which varies depending on the category of sound you have loaded. Ambience and Synth instruments offer controls for envelope and EQ among others, plus a menu where you can alter the sample. With the vocal patches, you get a picture of vocalist Clara Sorace, who provided the samples and different controls including Envelope and Legato.

Then you get tabs that access a pretty decent set of other features. There’s an Effects one that has Modulation, Delay, Comp, Drive, Amp, Cab and Reverb effects – needless to say, the latter is used a lot, but they all come with a good number of controls to manipulate each effect.

Other tabs are for an Arpeggiator (which lets you choose duration and number of steps and one of six play modes), plus two Modulation tabs (which aren’t so well featured, but do let you assign and draw in modulation by mouse). The Arpeggiator and Modulation tabs aren’t always featured on the Vocal sounds: they’re less applicable, I guess. 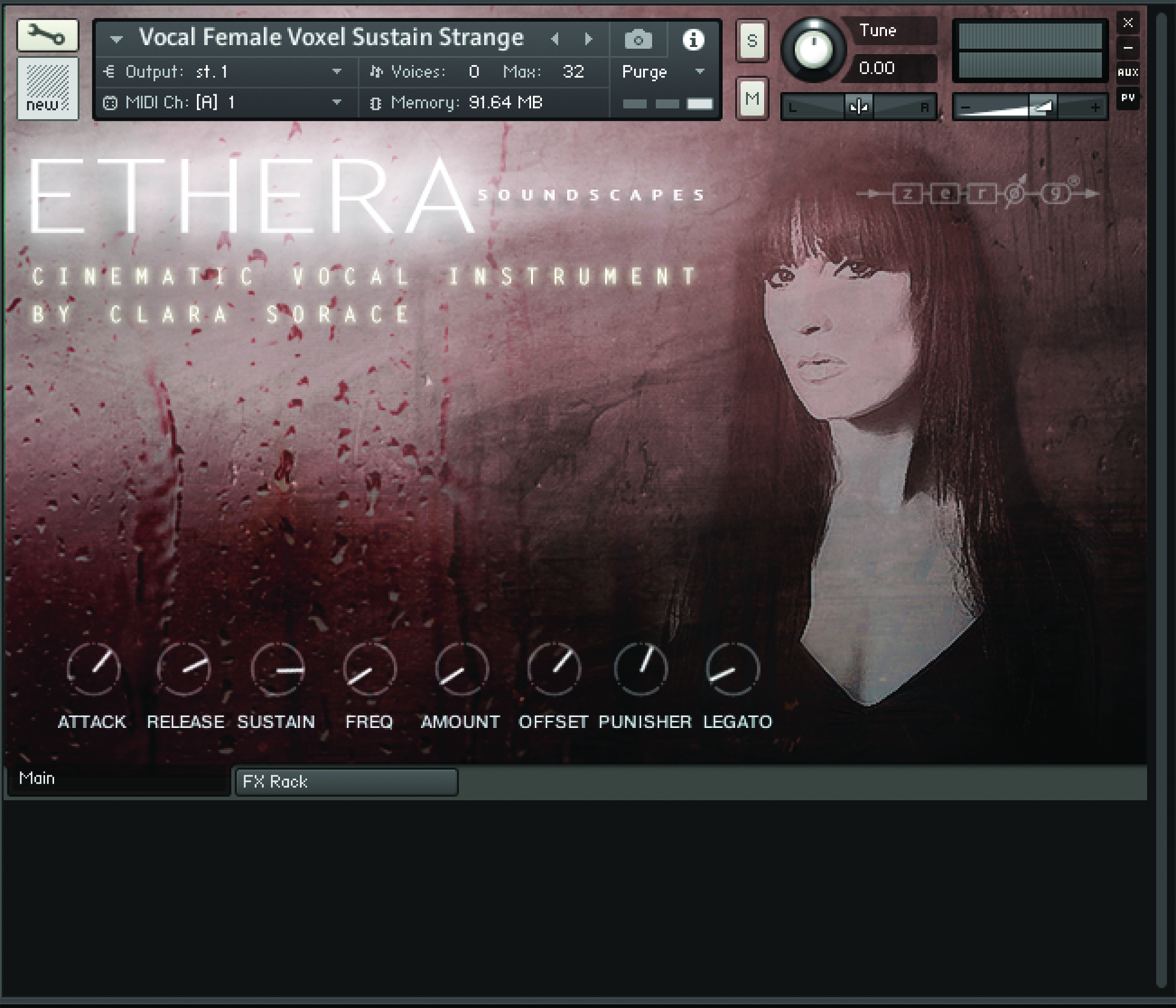 This differs depending on which of the three preset types you’ve loaded, but this is a preset from the Vocals folder, so features singer Clara Sorace. 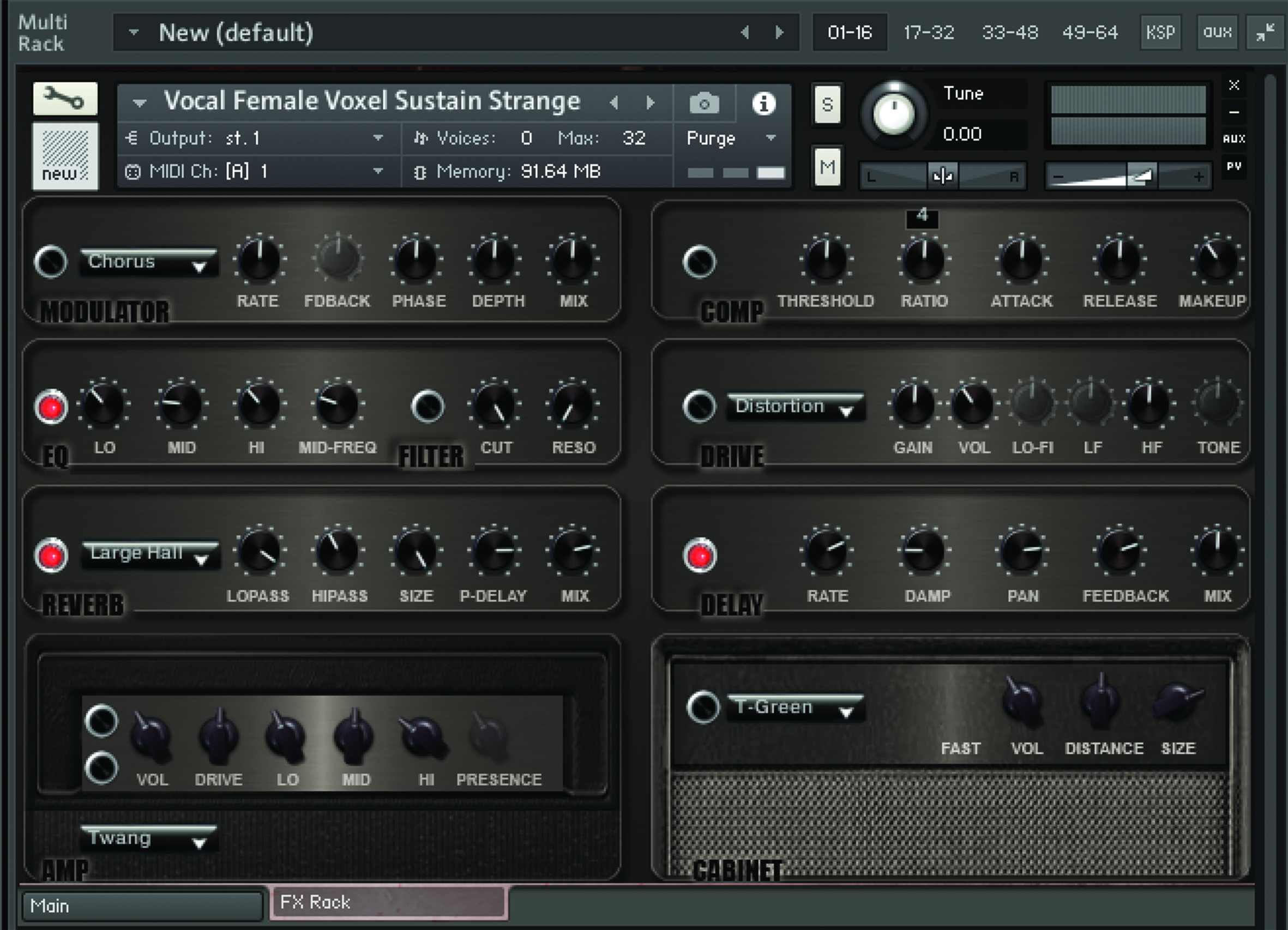 One of the big factors behind Ethera’s success is the rich effects section, which not only has some varied effects, but plenty of controls on each. 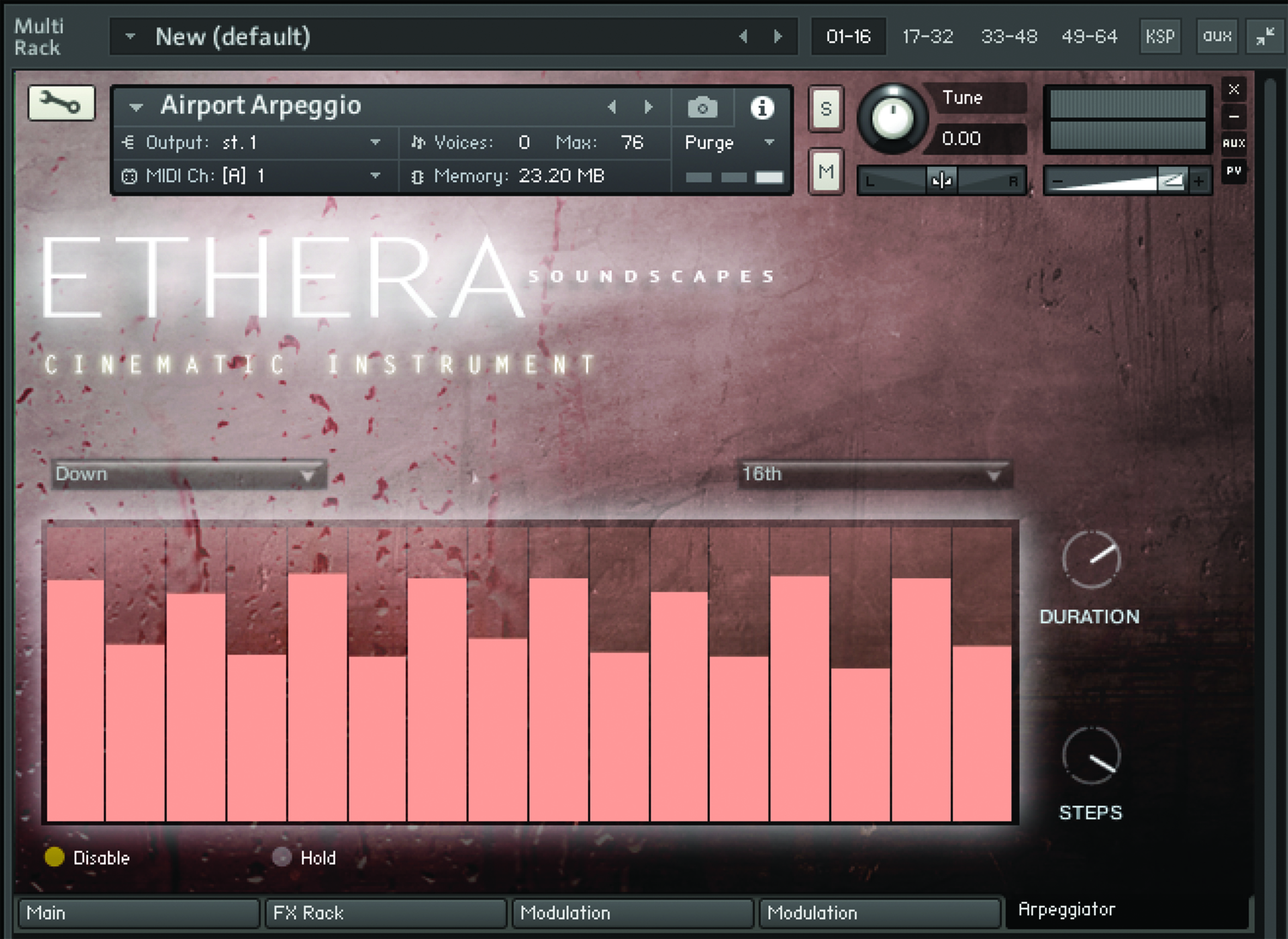 This is what you see when you click the Arpeggiator tab and, as with the Modulation tabs, you can draw your lines in with your mouse.

Starting with Ambience, you can choose between the raw samples or instruments which are made from them. So, taking the very first preset, Airport Arpeggio, as an example, it’s a sample of an announcer at an airport but built into a more complex sound using the arpeggiator and effects.

The concept – taking found sounds and using electronics to create instruments and sounds – continues through the bank. The Animal Pads are evocative and work really well, as do the pads made from city samples.

The arpeggiations are similarly oddball, with delicate bits of atmosphere shimmering around synthetic notes, although some work better than others – the Forrest one could be any synth, for example.

There are some very moving – and I mean that both physically and emotionally – presets that use modulations to introduce gradual sweeping and overall, I’m surprised by how much atmosphere there is in here. Sure, many are drenched in effects, but you could easily use these sounds for tension or atmosphere in anything from sci-fi/fantasy scoring to EDM.

Next up, it’s the Synth folder, itself broken down into several sub-folders called things like Long, Short and Arp. Sounds in the Long folder can be literally hundreds of MB in size and I can’t help but wonder if some of them needed to be so big – some looping could surely have been applied on the more orchestral sounds. However, once I whacked the arpeggiator on one, all was forgiven, as I morphed into some kind of mad Zimmer-like conductor. Some brilliance can be had here if you experiment.

The sounds in the Distortion folder are very impressive (although, again, I’d question the length of some when they fade to silence well before the sample is played). The hands-on stuff that Ethera offers comes to the fore here, especially the modulation possibilities. Being able to manipulate sounds in real time that already exhibit such menace is great fun.

Finally, it’s the Vocal folder and the bulk are female phrases as legatos, sustained, reversed or slowed down. There are patches with different phrases on different keyboard keys, so you can string some kind of fantasy song together, and there are also several male presets sung by Marco who doesn’t get his face (or even last name) on screen, unlike Clara Sorace. It’s all fantastic quality and as moody and atmospheric as you might expect.

If you audition just one sound, then I’d urge you to try out the ‘Vocal Female Voxel Sustain Strange’ preset, which is an extraordinarily manipulated vocal that demonstrates the power of what you can do with Ethera.

I keep bleating on about Eduardo’s collections, but they really are the ones to beat when it comes to fantasy. Shevannai (€159 from www.bestservice.de) is still my favourite. Okay, it’s specific to elves, so not as varied in nature as Soundscapes, but you do get great atmospheres and lovely, subtle instruments.

Other vocal collections worth checking out are Altus, Cantus and Mystica. For otherworldly sounds, I’d also recommend instruments like Output’s Signal (£159 from www.outputsounds.com) and Heavyocity’s amazing, but expensive, Gravity ($449 from www.heavyocity.com).

Ethera Soundscapes has won me over. Because of the incredibly cheap price – £77 for all of this is great value – I honestly wasn’t expecting much at all, but there’s a lot under the hood in terms of sample content and loads you can do with it. It’s not for everyone, but Ethera Soundscapes really puts the fantastic into the fantastical.