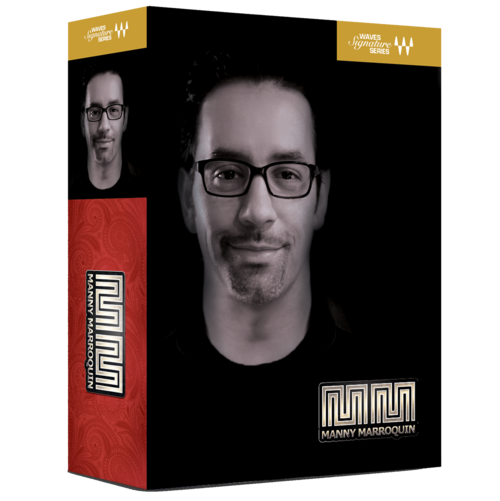 You get six plug-ins here, all put together by engineer Manny Marroquin, and given his background – Bruno Mars, Rihanna, Alicia Keys – it’s not surprising that this offering is geared towards loud, punchy mixes. You get a reverb, an EQ, a delay and a distortion, but there are also two non-standard units: the Tone Shaper and the Triple D.

What really blew us away, surprisingly, was the EQ. It works around a rather nifty idea: each band cutoff point is modelled on a different hardware unit – for example, the low end draws its character from the Neve 1073 and the Quad 8. Character is the right word here: this idea could have got messy, but it works beautifully, producing an EQ that has punch and colour in spades. We tested it on a bog-standard drum loop and it kicked it into the stratosphere. While it would have been nice to have a graphic display, this is a seriously good piece of kit.

The Tone Shaper and Triple D also impressed. The former is a multiband parallel compressor presented via a slick interface, and it gives good results at times, particularly in the high end. The closest thing we can compare it to is iZotope Ozone’s Harmonic Exciter –and that’s certainly no bad thing.

However, it’s the latter that really took us by surprise. The Triple D is so named because of its three controls: the DeBoxy, DeHarsher and DeEsser. We have to say that the DeBoxy, in particular, rocks: it takes mixes which are ‘boxy’ and lack depth and enables you to slowly round them out and give them a little more life. Along with the DeHarsher and DeEsser it makes for one mother of a package. While we might respectfully suggest that Waves’ marketing department not let its collaborators enjoy too much free rein with names in the future, it doesn’t alter the fact that this is an awesome, if somewhat bewildering, plug-in.

There some other nifty surprises, too, such as extra controls on each unit – a phaser on the reverb and an EQ on the distortion, among others – which proved to be surprisingly helpful gadgets. The plug-ins look ace, too, with a chunky hardware feel, and they truly shine when you combine several of them on a single track.

Back to Basics
Given the ass-kicking nature of the EQ, Triple D and Tone Shaper, it comes as a surprise that the other three plug-ins don’t really go anywhere. Take the reverb: if you keep things subtle you’ve got a high-quality ’verb here, but push it too hard and cracks start to appear in the sound. Having said that, Marroquin does include that phaser control, which can give reverbs extra sparkle.

We were similarly unmoved by the delay and the distortion units. While they’re perfectly functional and give good results, we just can’t help feeling that they don’t live up to the promise of the other units. When you’ve been blown away by your first date, it comes as a bit of a let-down to find that the second isn’t quite as good.

There are other issues, too. While the presentation is great, the knobs are slightly fiddly to use with a mouse. And can someone please ask Waves to rethink the download and licensing method? Having to use two separate downloaders to manage both license and plug-in files is getting very old-hat.

Marroquin for Me?
Despite its quirks, we’d recommend the Marroquin Series. It’s one of the more enjoyable set of plug-ins we’ve tried, and if you’re looking to put some oomph into your sound, it’s well worth looking at. At under $300 for six quality plug-ins, it’s good value for money, too.

+ EQ is a beast
+ Tone Shaper and Triple D are enormous fun
+ Injects mixes with character
– Fiddly knobs
– Clunky download system
Flashy, powerful and exciting, the Marroquin Series is a solid addition to the Waves stable – even if it still has a few wrinkles that need to be ironed out.