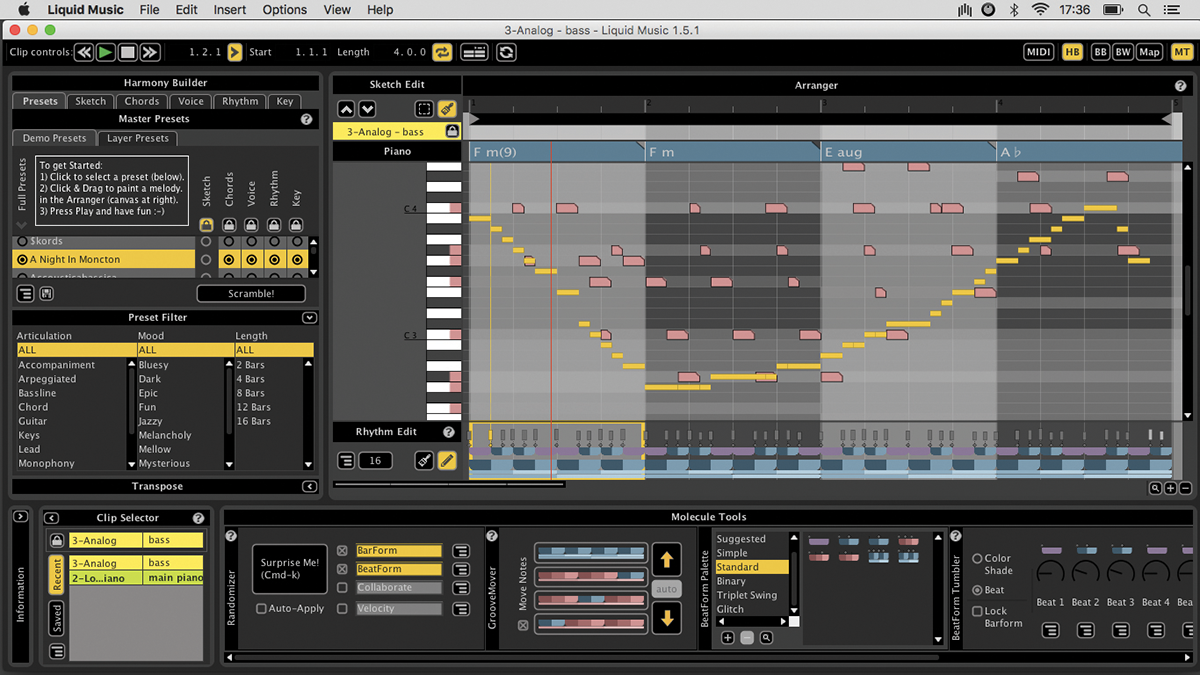 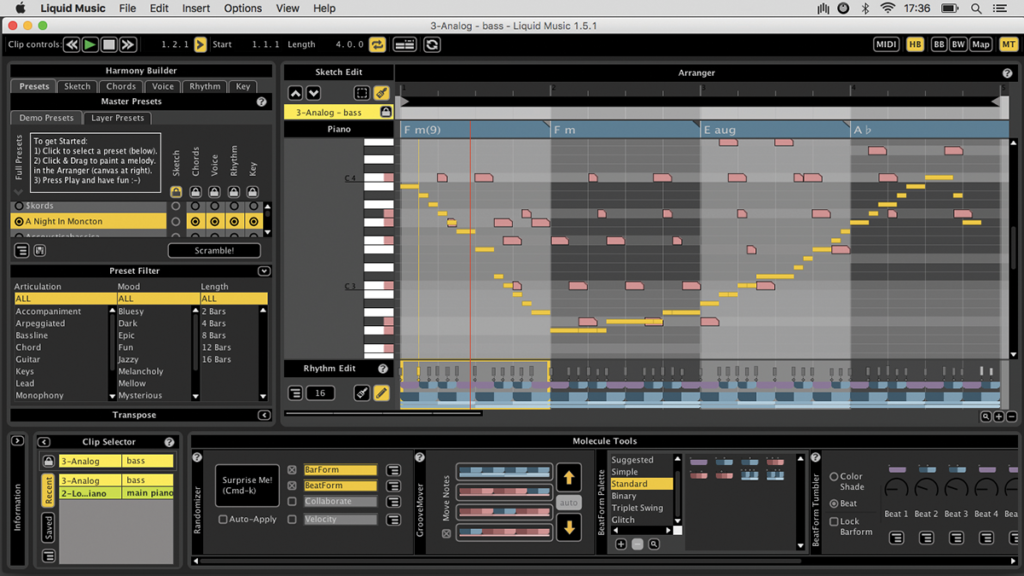 Flashback to the NAMM Show in January 2016: during the last hour of the show, I discovered the WaveDNA booth, and Liquid Music For Live, which instantly became a personal show highlight. This is a Max For Live-based Ableton Live ‘add on’, which aims to provide a new take on MIDI composition – whether that involves beats, melodies, harmonies, or chords. The idea is as you draw in a succession of single notes, the software will generate chords or harmonies around them, based on either presets, or on your own customised settings.

This review covers the Max For Live version, although AU and VST versions are included in the purchase, for the Ableton-challenged person. After installation, Liquid Music appears as a Max For Live MIDI effect in Live’s Browser. Drag it into a MIDI track, then load an instrument after it – it’s best to use a straightforward polyphonic instrument like a piano at first. Create an empty MIDI clip in the track, then click the button in the device to launch and connect to the separate Liquid Music application.

After that, all that’s required is to select a preset and start drawing notes. As you do so, you’ll see the notes appearing in the Live MIDI clip – complete with extra notes generated by whatever chords or harmonies were created by the preset chosen earlier. This is very impressive, and blew my mind the first time I saw it.

Traditional MIDI ‘editing’ functions aren’t available within the plug-in, but you’ve already got Live if you want to drag MIDI notes around. in Liquid Music, it’s about editing the preset settings, and applying those to the current notes, or drawing in some fresh ones… or clicking the ‘Surprise Me!’ button for a bit of randomisation. It’s a mixture of game-like exploration, and as much music theory as you want to add. 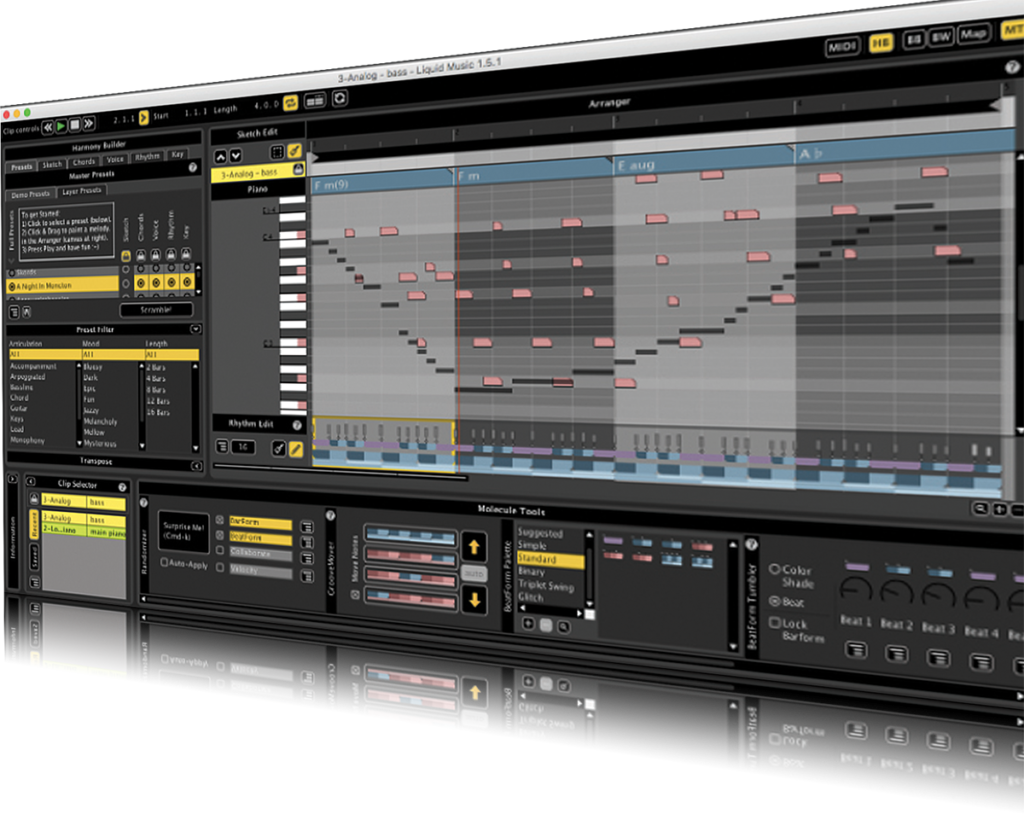 There’s a great chord-sequencing feature, with a tool called the Suggester, which will suggest chords that naturally follow on from your initial selection, and you can also base chord selection on selected moods. Interestingly, a single instance of Liquid Music, loaded into any MIDI track, can access any MIDI clip, in any track, in your set.

Another cool Ableton-specific feature is the ability to import a melody from an existing Live MIDI clip into Liquid Music. Full MIDI-control mapping is available, so you could use Liquid Music as an exciting performance tool as well. The musically ignorant (including me) can use the plug-in to create compositions they never would’ve managed otherwise – it’s not the same as simply using

Live’s MIDI effect devices, for example – while the more experienced musician looking for a change will also be rewarded. I should mention this also includes the full version of Liquid Rhythm, which is of course the beat-oriented equivalent.

Wave DNA’s Liquid Music For Live is a unique product, and a must-have for anybody either struggling to compose their own MIDI parts, or seeking new composition and programming techniques. There were points where I was getting over-excited and thinking, “Wow, I’m gonna use this for all my music from now on!” – realistically, that probably isn’t going to happen, but I am still very enthusiastic about Liquid Music as a music creation tool. 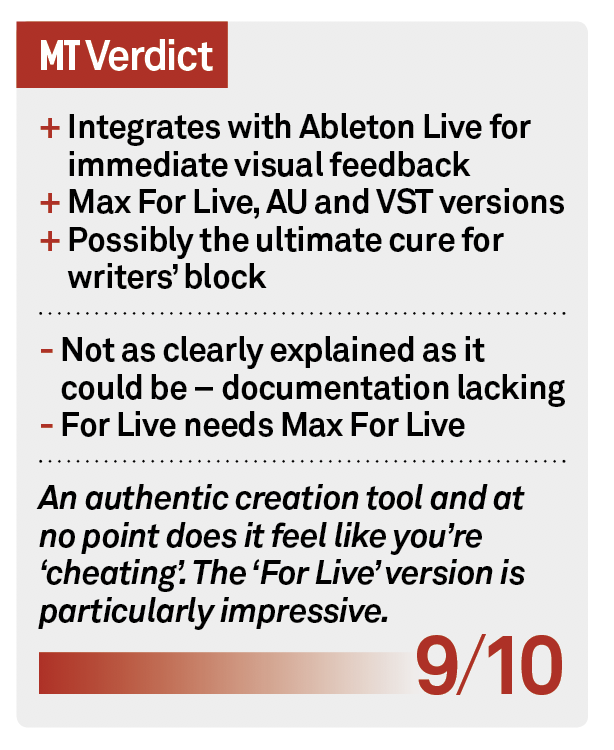